Indie spirit meets mainstream muscle in this quirky collaboration between Joe Doe Guitars and John Hornby Skewes… but is the Jailbird good enough to be a breakout hit? 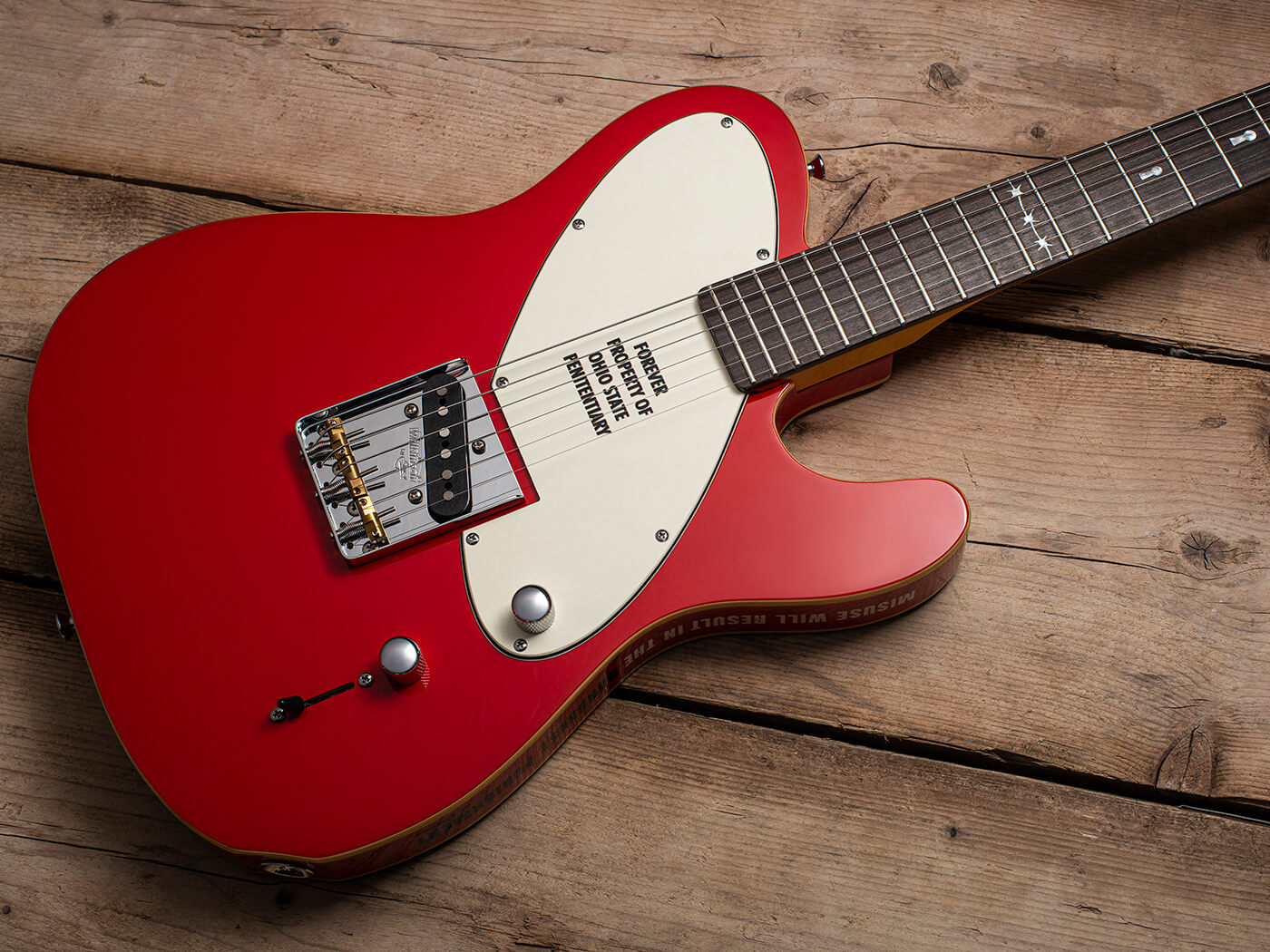 A workmanlike T-type with talking-point looks and (mostly) cutting tones.

Joe Doe is the alter ego of Ben Court, a Brighton-based film and TV screenwriter who normally makes guitars as a sideline. They’re cool-looking instruments, each with a cinematic ‘backstory’ behind its distinctive design, but a one-man operation means small production numbers and not-so-small prices – and that’s where John Hornby Skewes comes in.

Teaming up with the powerhouse behind the Vintage brand has allowed Ben to apply his unique vision to a range of guitars produced in Asia on a much larger scale, and at much more tempting prices. Among the first fruits of that deal, on a limited run of 100 instruments, is the Jailbird.

This is a guitar with a fascinating provenance… and for once you don’t have to worry whether all of it is true, because you know none of it is. The tale involves an arsonist, a prison warder and a blues-inspired riot; you can read it all on the JHS website, or just enjoy the graphical flourishes on the guitar itself that evoke – quite successfully – the intimidating atmosphere of Ohio State Penitentiary circa 1967. 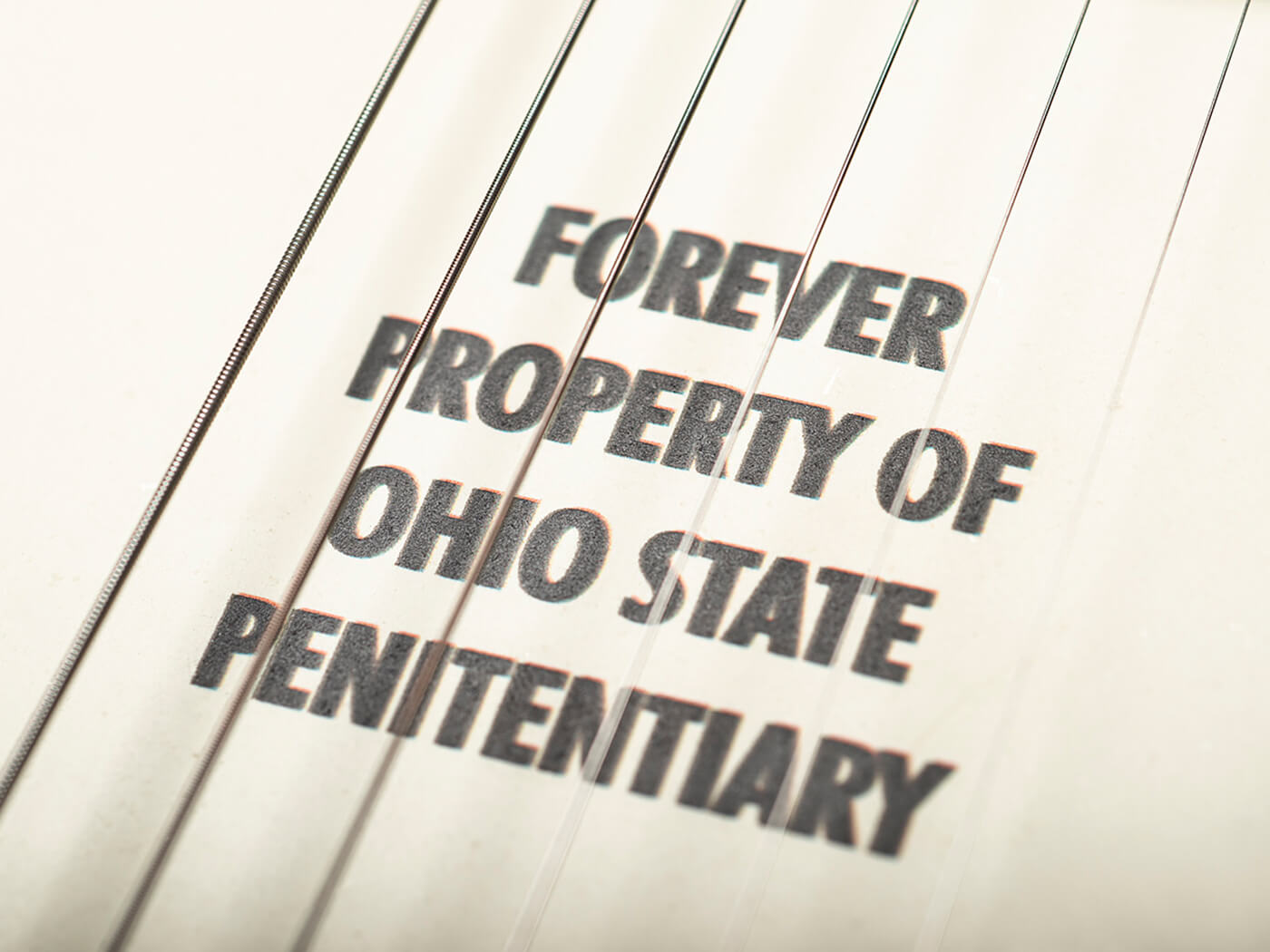 In fact, the only thing that doesn’t quite fit the story is the Jailbird’s most striking feature: its oval scratchplate. We don’t really mind, however, because it looks great. That aside, this guitar appears to be a straightforward T-type, which is confirmed by a decal at the tip of the headstock that reads ‘Built on a Vintage V52 chassis’. It’s nice to know, though it does detract ever so slightly from the vibe and it’s a shame they couldn’t have stuck it around the back.

If you’re thinking this looks more like an Esquire than a Telecaster, think again – there’s a ‘secret’ neck pickup under that ’guard. The paperwork says it’s a hot humbucker, but what’s actually fitted in there is a skinny single-coil – maybe the cost of routing out the standard Vintage body for anything bigger turned out to be impractical. It’s a pity, and we wonder how well this unit – with a DC resistance reading of less than 7k ohms – will manage to make itself heard from back there.

The alder body is described as ‘light’ but our review instrument is distinctly heavier than average for its type. Mind you, a lot of that might be down to the neck, which is a chunky piece of hard rock maple that pulls down quite insistently on the strap. It’s topped by a fretboard made of ‘lignum rosa’ (a wood-based material that Vintage has been using as a rosewood alternative since the whole CITES thing escalated in 2017) with 22 frets and prison-themed marker inlays. 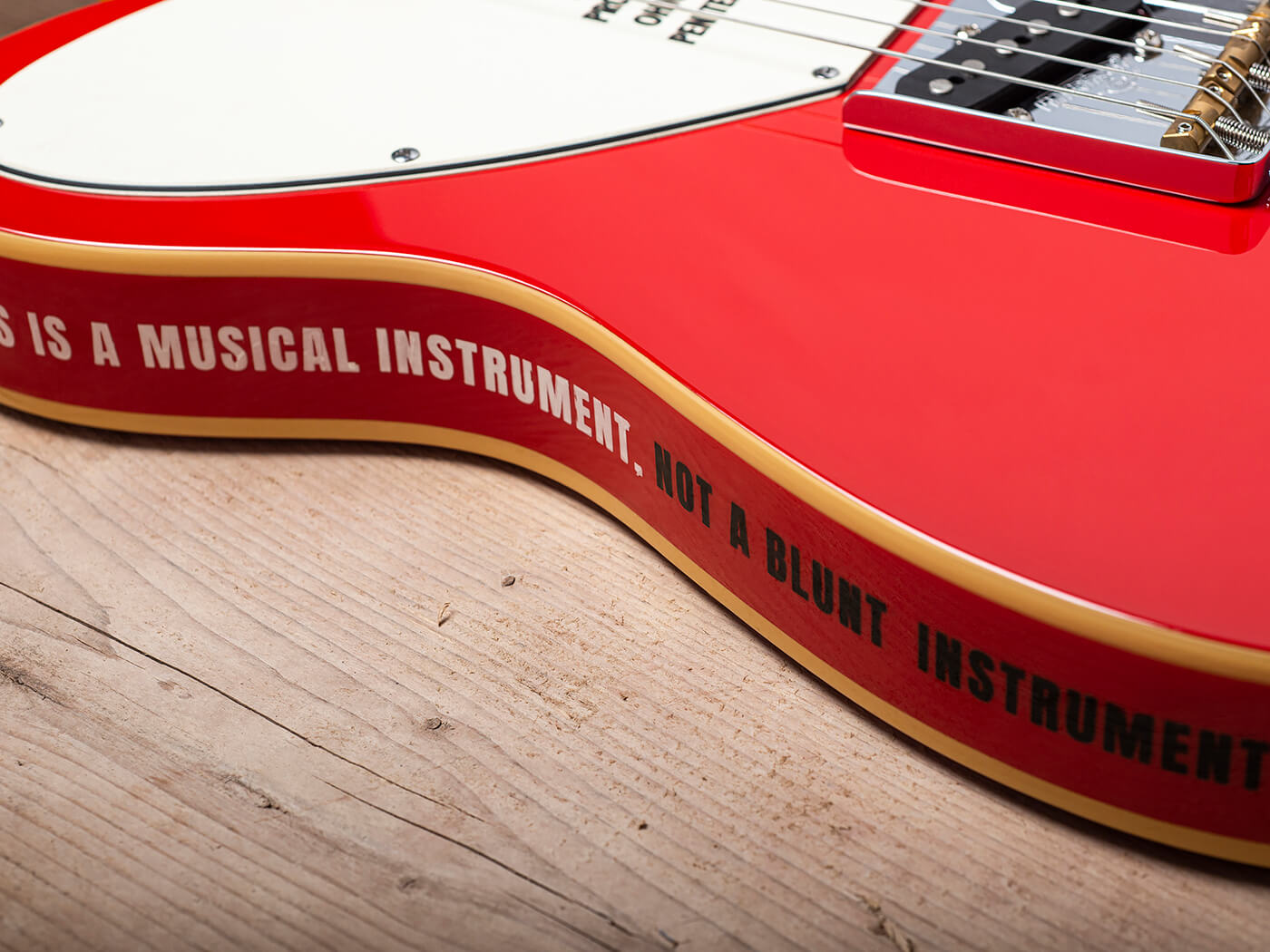 The Wilkinson bridge has three compensated brass saddles for retro tone with modern intonation accuracy, while the knobs and pickup switch are lined up as they would be on a normal Tele’s control plate, except with the switch at the back – which has the advantage of bringing the volume control closer to the strings for pinkie swells.

If this guitar was supposedly built in a prison workshop, does that excuse some slightly dubious finishing? The warning on the back of the neck not to play higher than the 12th fret is meant as a joke, but given the roughness of some of the ends up there we’re quite inclined to heed it; the hidden pickup seems to be pushing the scratchplate a good millimetre clear of the body on the treble side; the painted-on binding is quite untidy around the neck join; and, if we’re going in close, it looks a little sloppy that countersunk screws have been used to secure the pickup switch against the flat body.

For this test we’ll be using a US-made Telecaster – a trusty workhorse that’s neither vintage nor Vintage – as our reference point. In acoustic tone there’s little to choose between the two guitars, though the Jailbird comes across slightly dry and lacking in natural warmth next to the cuddly Fender.

When we plug in, we quickly find that the Joe Doe bridge pickup only accentuates that difference: it sounds like a T-type alright, with no shortage of spanky aggression, but the bottom end is distinctly lightweight and the emphasis is very much on the upper midrange. That’s not necessarily bad news – if you’re after a guitar that’ll cut through a band mix and don’t care about full-range strumming tones, it might be just the thing.

If you’re after a guitar that definitely won’t cut through a band mix, look no further than the Jailbird’s neck pickup. It sounds pleasant enough, but as we feared, it’s very quiet indeed – a rough match in output for the bridge pickup at half volume. This is disappointing, but again, some players might actually be glad of it: if you only ever use the neck position for low-in-the-mix rhythm work, the pickup switch here effectively becomes a powerful booster to engage the much louder bridge unit for your spotlight moments. 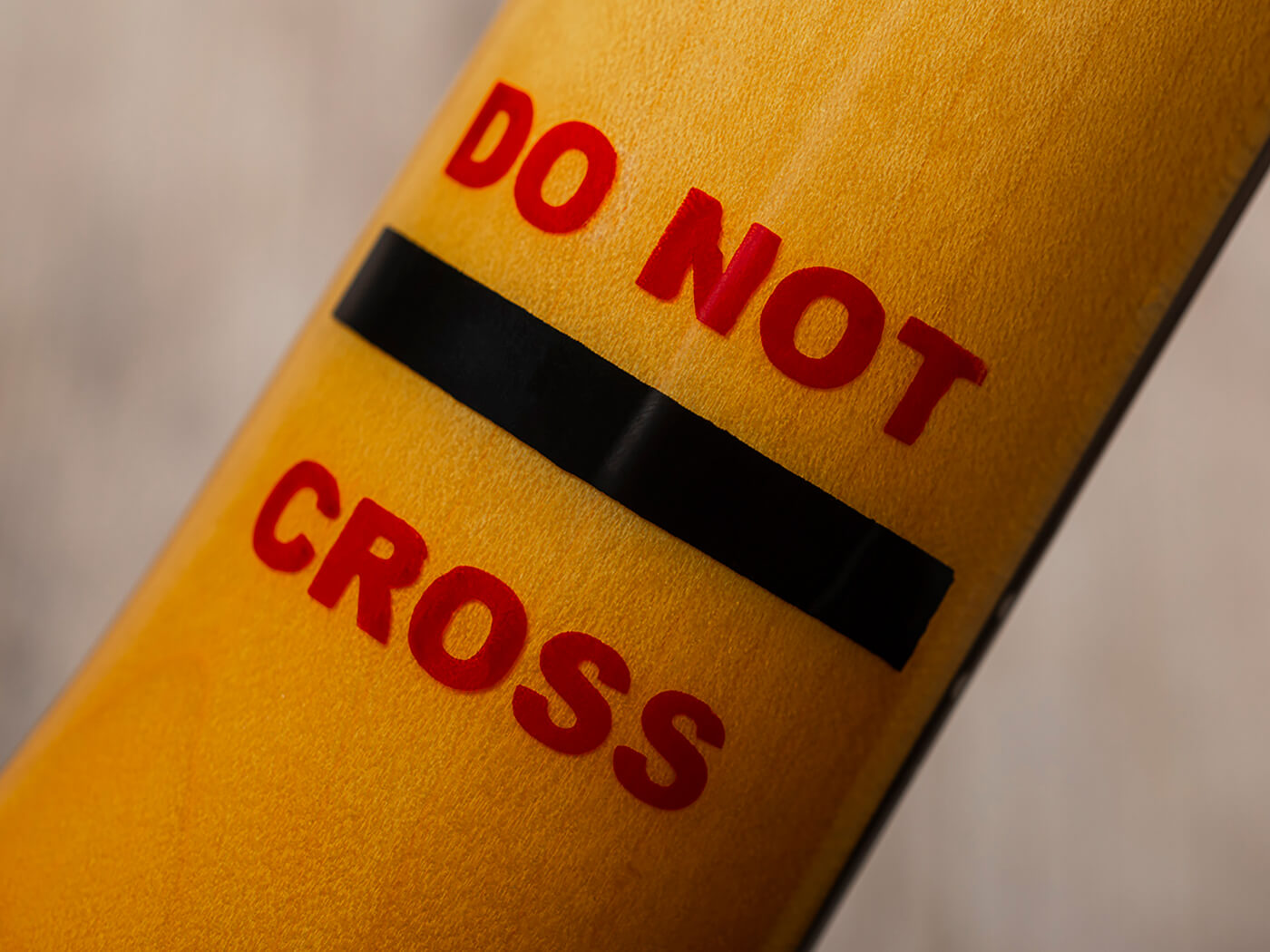 At least the imbalance between the two pickups doesn’t have any adverse effect on the middle position. The lack of low-end oomph is still noticeable here, but it’s a likeable sound with lots of cluck that’s great for clean arpeggios and chiming chords. What’s more, that midrange-focused voice means it can take an awful lot of overdrive without the low end getting congested: when there’s crunch involved, ‘light’ quickly becomes ‘tight’, and at mid-gain settings in either middle or bridge position this guitar sounds almost like our reference Tele running through a Tube Screamer.

Goodness knows we all need some fantasy to cheer us up in these troubled times; and if nothing else, the Jailbird’s imaginative story will make it a real conversation starter. Without that extra element, it would be a pretty unremarkable Tele-type with less than stellar build quality – but it certainly has the attitude to match its hard-bitten backstory, and there’s enough going on here to suggest the Joe Doe and Vintage collaboration has real potential. 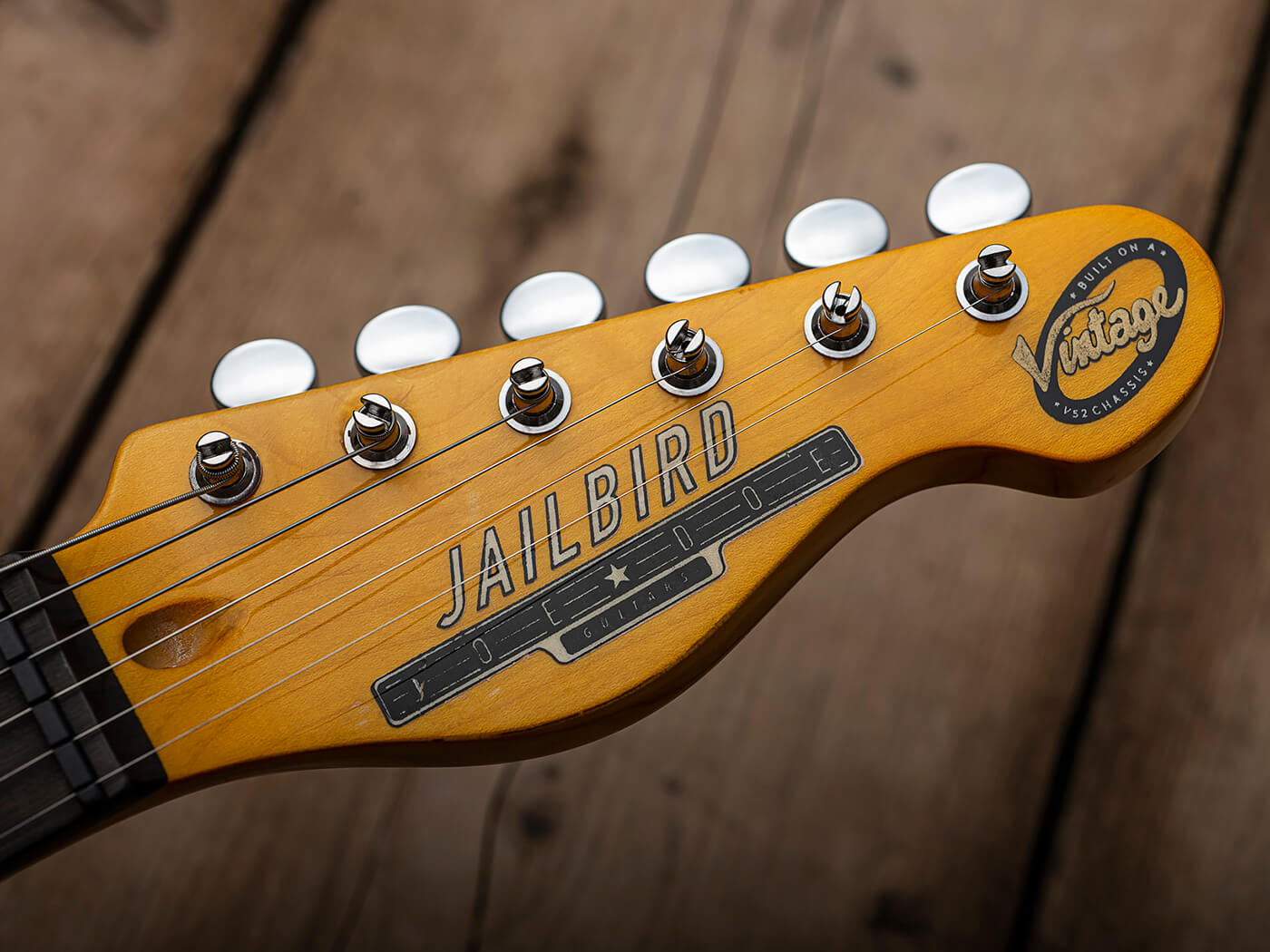