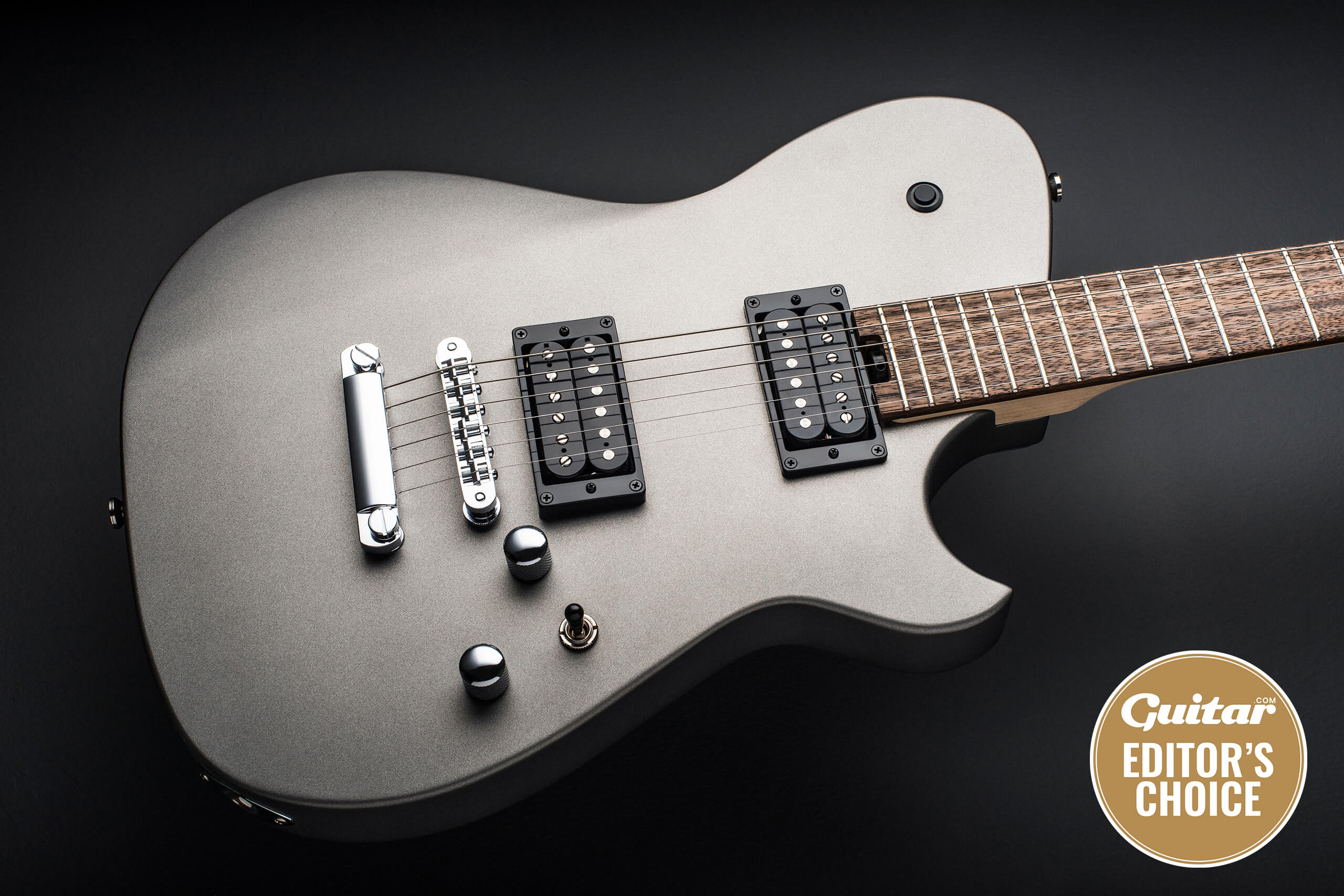 Muse frontman Matt Bellamy is now at the helm of Manson Guitar Works, and 2020 sees the arrival of this new, affordable plug-in baby.

A mean and masterful rock guitar that thrives on a high-gain diet, at a price most Muse fans should be able to afford. Mission accomplished.

Remember Victor Kiam, the businessman who liked Remington shavers so much he bought the company? That’s almost what Matt Bellamy did with Manson Guitar Works last year, acquiring a majority share in the Devon firm that’s been building the guitars he’s used for the past 19 years. Find out what Bellamy had to say about it in our recent interview.

Don’t worry, there are no signs that the singer will start making cheesy TV ads or launch a range of Manson-branded electronic grooming products any time soon. Instead, the company’s latest release is an updated version of Bellamy’s signature model, with a few significant changes, including the maker’s name on the headstock.

Manson’s UK-built MB-1 Standard model hasn’t been in full production for some time now – and cost upwards of £3,000 when it was – but in 2015 the company collaborated with Cort to launch the MBC-1, an Indonesian-made variant at a more accessible price. The MBM-1 is 2020’s answer to that guitar.

It’s still made under licence by Cort in Indonesia, and some of the core specifications remain unchanged – basswood body, maple neck, tune-o-matic bridge and kill button, for example – but the neck profile is now more of a V than a D, and the pickup nearest to it is a humbucker rather than a single coil. And yes, it now has ‘Manson’ on the front of the headstock and ‘Cort’ tucked away around the back, rather than the other way around. It’s a subtle change, but branding is everything these days.

The most important name on that headstock, however, remains the squiggly signature at the end. Unlike some of Bellamy’s own guitars, there are no Kaoss Pad controllers, built-in effects or front-firing lasers here. But the MBM-1 is still clearly a ‘Mattocaster’, thanks largely to its distinctive ‘melted Telecaster’ outline.

There are a host of options with the MBM-1. This fetching silver-grey finish is new but the familiar black is available too. Should you want access to more unconventional sounds, you can have the neck pickup replaced by a Sustainiac for an extra £369. Note, too, that there’s no gigbag included in the base price of £569.

This is a modern rock guitar that cherry-picks design elements from both sides of the fence: the scale length is a Fender-style 25.5 inches and the neck is bolted on (via a plate inscribed “Cort x Manson”), but the bridge and tailpiece are true to the Gibson formula, as are the twin humbuckers, which give DC resistance readings of about 13k ohms and are therefore likely to be pretty pushy. You get Strat-style chamfers front and back and, at the other end, locking tuners with staggered post heights, negating the need for a string tree.

“The clean tones are big, clear and piano-like, especially on the neck pickup”

Finally, before we start making a supermassive racket, a word on the kill button. As every student of rock mayhem knows, you can create dramatic stutter effects on any two-pickup guitar with independent volume controls by turning one of them to zero and rapidly toggling the switch. But as anyone who can count to two knows, the MBM-1 only has a master volume and a tone control – hence this little black button, helpfully positioned where the pickup switch on a Les Paul would be. Even if this isn’t an essential tool for you, at least it’s discreet.

Although arena-sized riffs have taken a back seat in Muse’s music in recent years, Bellamy remains an alt-rock hero to millions – and one whose finest six-string moments have involved more than a little distortion. With that in mind, we’ll be cranking it up and playing with a heavy hand.

Speaking of which, at 3.6kg, our review guitar is relatively weighty for a bolt-on and, from the way it sits on a strap, much of that seems to be down to the Canadian hard maple neck rather than the basswood body. The neck’s gentle V shape prevents it from feeling too chunky, but there’s a decent amount of meat to it and the satin finish is smooth and inviting.

We’re spoilt by the build quality of Asian-made guitars these days but it’s still worth pointing out that this instrument is a joy to play, with an issue-free factory set-up. The only problem that our fingers encounter is the absence of any markers on the compound-radius Indian laurel fretboard. Bellamy prefers his ’boards unmarked so we’ll have to get by with the white dots along the edge.

For what it’s worth, the clean tones are big, clear and piano-like, especially on the neck pickup, with a well-balanced output level across all three positions. There’s nothing spectacular going on here but it’s the kind of solid foundation that bodes well for what’s to come when we switch to the dirty channel.

The overdriven sounds are every bit as powerful and propulsive as we’d hoped. The low end thumps through with real authority on both pickups but it’s the hot and punchy midrange that’s doing the heavy lifting; it has such a tight focus that the guitar practically plays pinched harmonics by itself. There’s just enough clarity for the pick attack on single notes to cut through with crisp precision and, as a bonus, those humbuckers are so potent that you won’t need an awful lot of gain to coax a small amp into feedback.

To avoid any nasty popping, you’ll want to turn up the gain before using the kill button. While we can’t vouch for the longevity of this born-to-be-hammered component, it gets through our spitefully insistent testing without difficulty.

Job done, then – and in commanding style. You’re not getting the tonal complexity of a vintage Fender or Gibson type here but that’s not the point. This is simply a super-playable guitar with a meaty yet disciplined 21st-century rock voice that could cajole a crowd into hysteria – and we’ve a feeling that’s exactly what the boss asked for.