Specially commissioned by British blues guitarist Aynsley Lister, this take on the classic single-cut format comes equipped with a wrapover bridge and an old-school pickup combination. 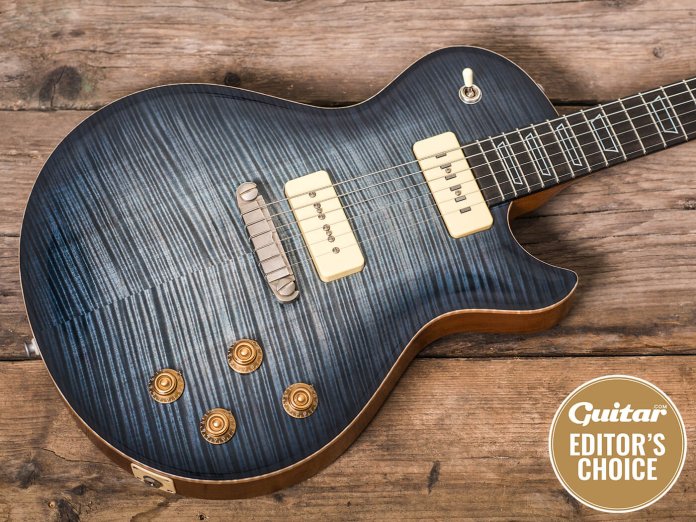 Our first encounter with Patrick James Eggle’s impressive Macon double-cut was back in 2015, and the similarly gorgeous Single Cut version followed two years later. Available in dual humbucker and P-90 configurations with a solid, chambered or ‘semi-chambered’ body, this example was built recently at the behest of Brit blues star Aynsley Lister and features a couple of twists.

When the Les Paul Custom arrived on the scene in late 1953 – black, “like a tuxedo”, just as Les requested – it came equipped with a P-90 at the bridge and a ‘staple’ pickup in the neck position with alnico bar magnets. This combination was consigned to history when the newfangled PAF arrived in mid-1957, but it has something of a cult following, offering a very different experience to that of a Goldtop fitted with a pair of soapbars.

Here in 2019, Aynsley has chosen an early LP Custom-style combination of P-90 and Staple units wound by Mojo Pickups main man Marc Ransley and an aluminium PRS-style wraparound bridge made by ABM in Germany. The tasteful hardware ageing – also seen on the Kluson-style Gotoh SD90 tuners – is done by Eggle’s in-house team.

Although the Macon’s overall formula doesn’t deviate too far from Kalamazoo in the mid 50s, the belly-cut and set ‘slipper’ neck joint provide graceful concessions to player comfort. Meanwhile, the centre-joined flametop with its gloss nitrocellulose finish and dramatic dish carve is glued to a semi-chambered back that Patrick tells us has around 20 per cent of the mahogany removed (fully chambered being closer to 60 per cent).

The ebony fingerboard’s understated frame inlays and unbound edges help balance the impact of that eye-popping top and make for an overall aesthetic with a little luxury, but not too much flash. Aside from the slightly flimsy feel of the gold top-hat knobs, every aspect of this guitar comes straight out of the top drawer and it’s beautifully made, with just the right balance of precision and personality.

Although the Macon’s shimmering flametop and faux binding might have the vibe of a PRS or Nik Huber, the acoustic playing experience feels closer to the source and is reminiscent of a wrapover Goldtop with a long, shifting note decay combining with ghostly, piano-like highs and huge head-to-tail resonance. The partial chambering certainly helps, but happily there’s no lack of mid push, either.

The back of the neck’s ‘worn through’ open-pore finish between the first and 14th frets has an organic but smooth feel reminiscent of one of Eggle’s fabulous acoustics, while the ‘Fat C’ carve is beautifully rounded and will score many points with fans of old Gibsons. Yet when you work your way up to those higher reaches, you’ll notice that it’s a much softer ride than the traditional LP neck joint.

Many instruments are described as vocal sounding, but plugging the Macon into our Lazy J combo quickly reveals this guitar’s vocabulary extends further than most. The bridge P-90 has a raunchy snarl for riffs and chords that soon transforms into a wonderfully expressive blues-rock lead tone that’s at once creamy and nasal, with plenty of upper-harmonic interest.

The Mojo Staple pickup is a very different animal – played clean, it’s easy to hear the evolutionary link back to the DeArmond Dynasonics that Les Paul stuffed inside P-90 covers on his early Goldtops. There are such clear highs and deep, articulate bass notes that jazz, hybrid-picking and fingerstyle workouts are equally well served.

Wind up the drive and take a Hendrix-y approach and all of a sudden the percussive dynamics of the pickup and the elastic response of the 24.6-inch scale length – even strung with Aynsley’s preferred set of Curt Mangan 0.11s – combine into something resembling a fat and visceral Strat tone. Exhilarating stuff.

What happens in the middle position? We imagine this is where Aynsley will spend a lot of his time, because there’s just so much light and shade available for blues playing – from sweet to savage and numerous points in between. The onboard controls are musical and responsive; it’s possible to create pseudo-wah effects by rolling the neck pickup’s volume in and out of the mix and there’s a sweet spot around seven and a half where you’ll find a quacky, cocked-wah-style lead tone.

Although our time with this instrument merely allows us to scratch the surface (not literally, Aynsley, we promise), it’s clear there’s a beguiling array of tones on offer. Once again, we find ourselves saluting the formidable luthiery skills of Patrick Eggle and his team.