The maker of affordable guitars comes of age with three commemorative limited editions in a distinctive Silverburst finish. Are they worth breaking out the bubbly for? 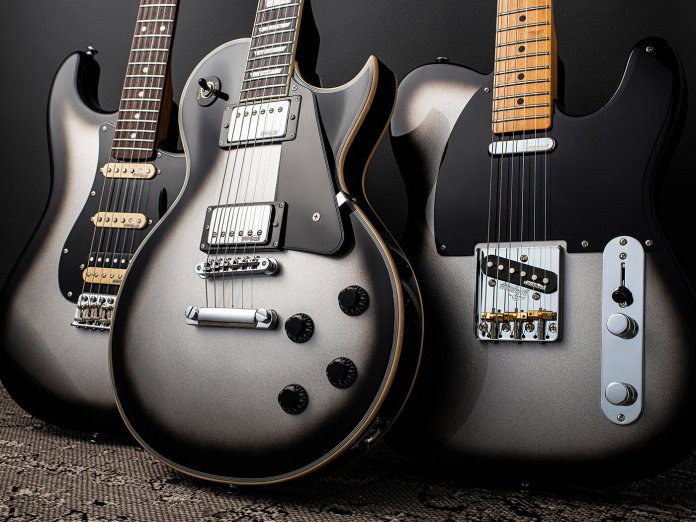 We’re not quite at the stage where you can buy a ‘vintage Vintage’, but 2020 is the silver anniversary year for the main in-house guitar brand of British distributor John Hornby Skewes – and it’s celebrating in suitably sparkly style.

The Vintage name actually started out as a more upmarket series within JHS’s entry-level Encore line, but soon outgrew that stable on its way to what today almost feels like world domination in the sub-£500 market. The recipe is simple: designs that stay as close as is legally permissible to the established Fender and Gibson templates, built in China without cutting corners on hardware or pickups. 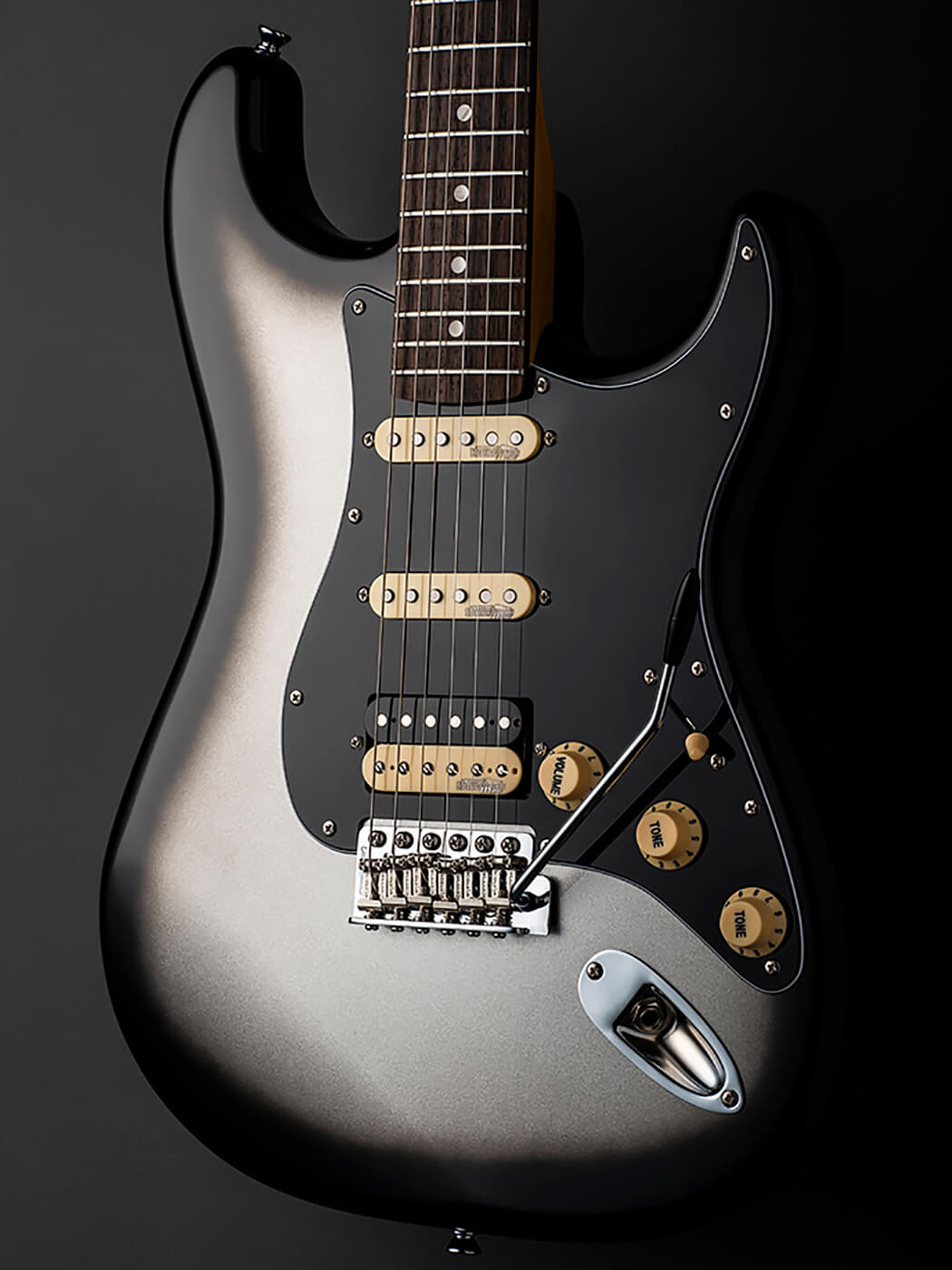 There are no surprises in the models chosen for this 25th Anniversary Series, then: a straight-down-the-line T-type, S-type (with bridge humbucker) and LP-type. Each one is limited to 100 right-handed guitars, all in this striking Silverburst finish.

Obviously we’re expecting three very distinct-sounding instruments here, but there are some shared features beyond the colour scheme – most notably the inclusion of Vintage’s usual Trev Wilkinson pickups and bridges on all three models. What becomes apparent before we’ve even switched on an amp is that they also share a fundamental quality of manufacture, with neat neck joins, solid hardware, well-aligned scratchplates and no snaggy fret ends. 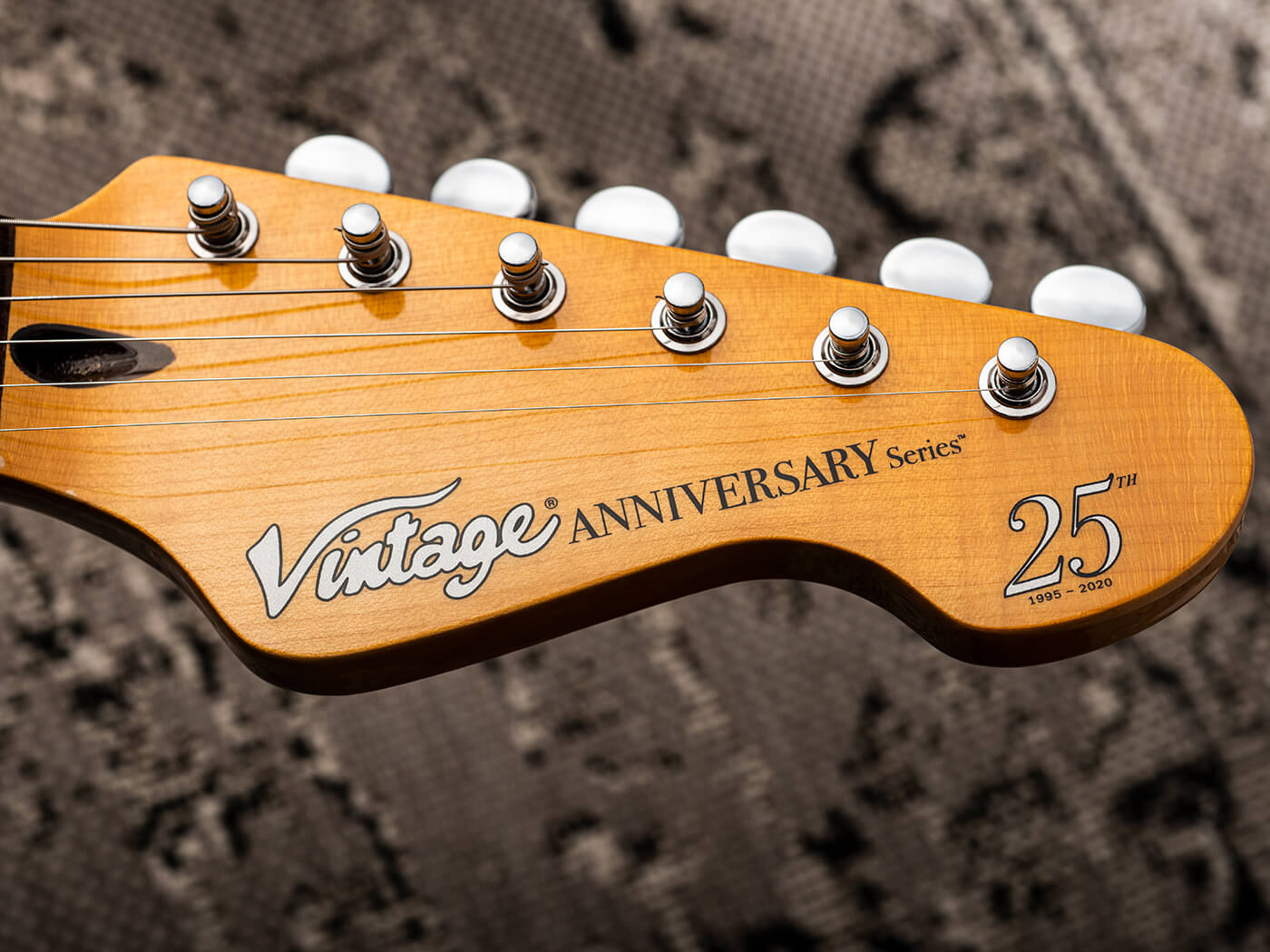 It’s only the non-copyright-infringing headstocks that clearly depart from the classic Fender and Gibson designs, but closer inspection reveals a couple of practical enhancements: the Tele-like V75 has compensated barrel saddles for better intonation, while the other two guitars have rounded carves at the neck join for easier access to the top frets.

The burst has been applied tidily on all three instruments, and we like the retro feel of the V75’s single-ply, five-screw guard – just as you’d get on a 1950 Broadcaster. You won’t find many 70-year-old guitars with a neck as shiny as this, though: it’s a full gloss job, on a plank of hard rock maple that’s more than averagely chunky. 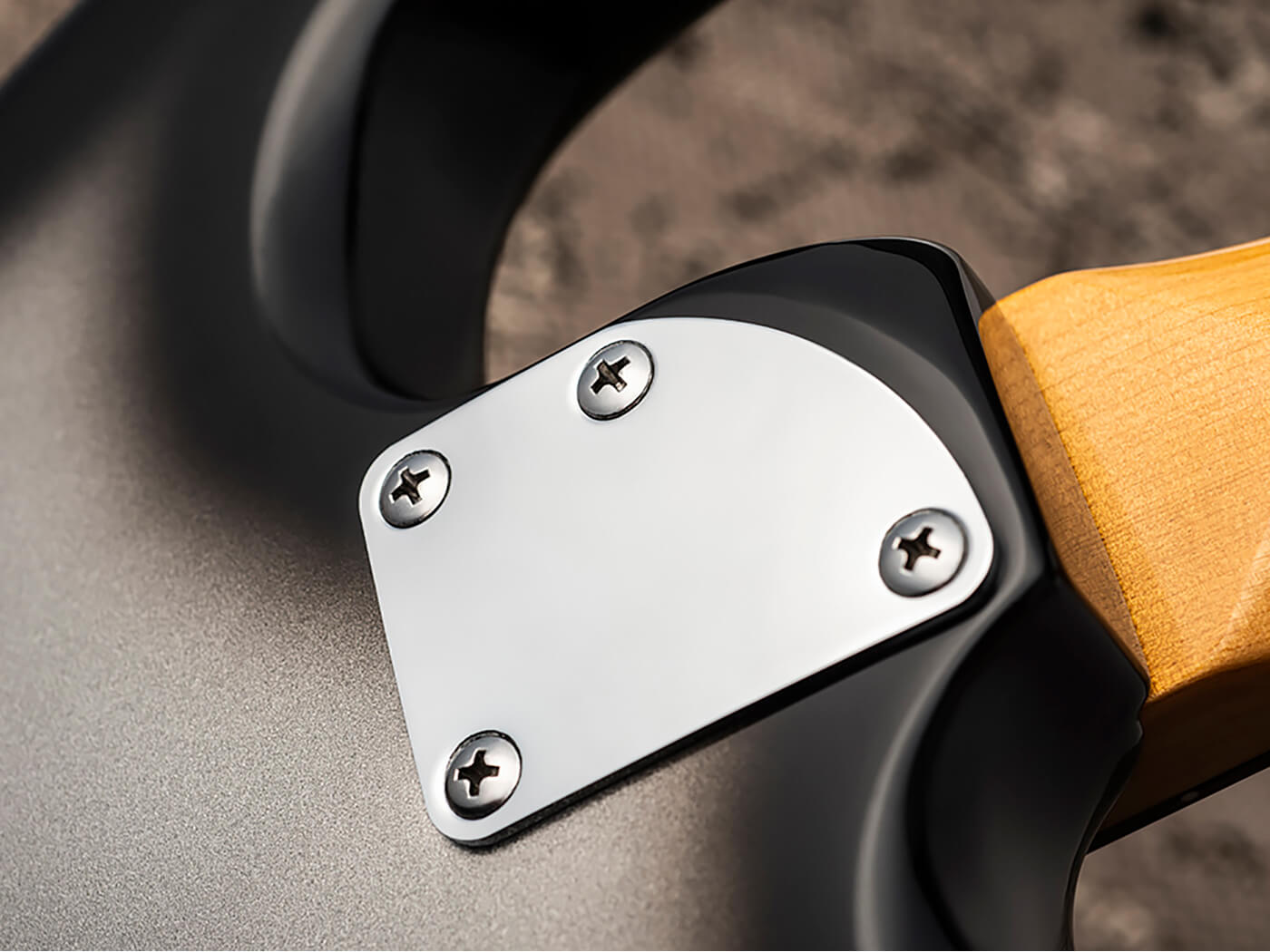 The Strat-like V6H feels a touch slimmer in the left hand, and its rosewood fretboard helps to offset the glossiness of the back of the neck. The vintage-style tuners are Wilkinson WJ55 E-Z-Lok units rather than the WJ55 Deluxe machineheads found on the V75, while the bridge pivots on six screws and, with the three springs fitted, feels reassuringly firm. This HSS pickup arrangement is far from vintage, but the humbucker can be split with a lift of its tone control. 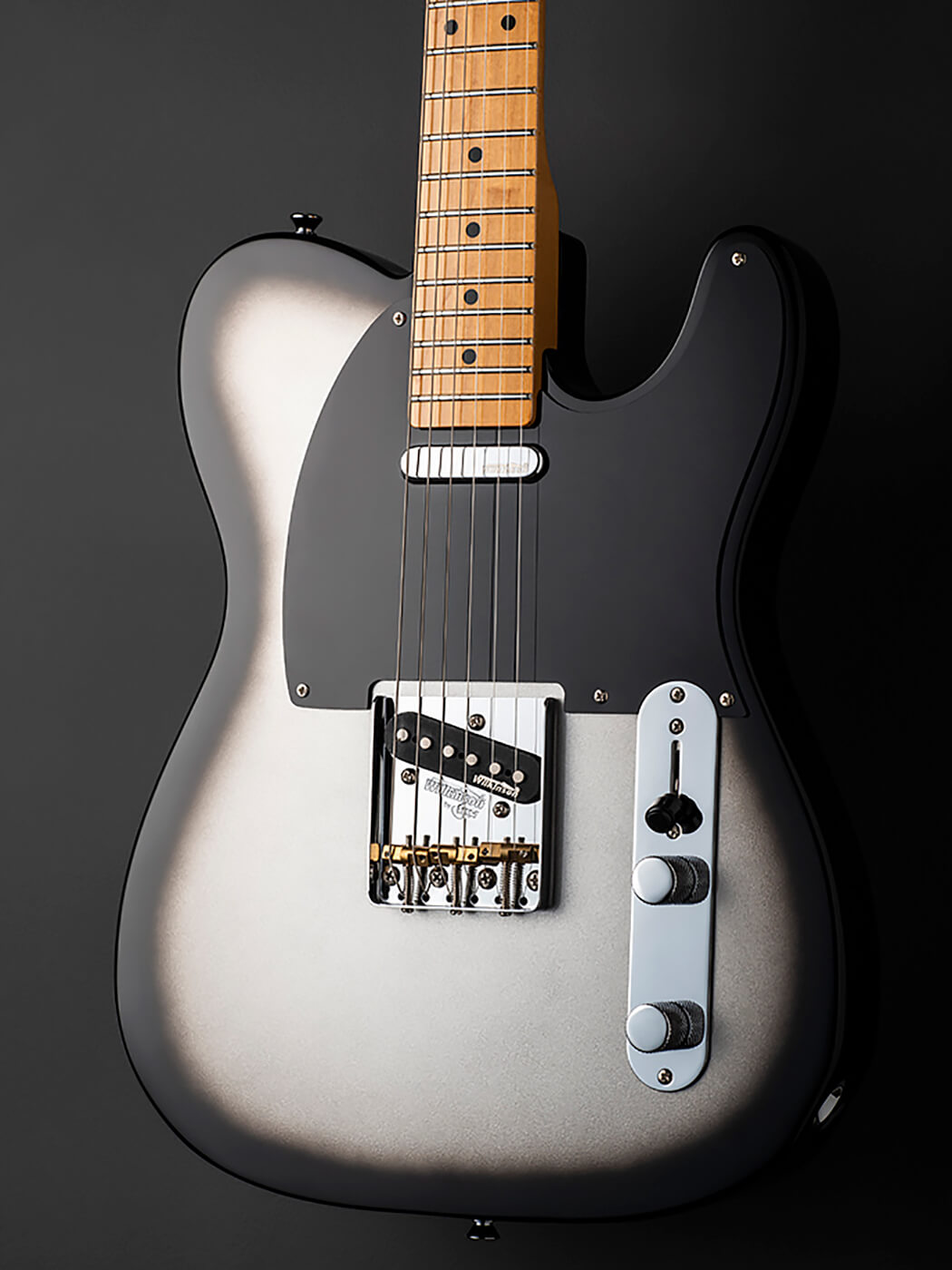 A deep mahogany body and maple cap give the V100 a fair amount of heft – it doesn’t appear to be chambered – while the neck is quite a handful but feels more rounded than that of the big-shouldered V75. The pickups are ceramic humbuckers (with no coil-splitting option) and this time we’re treated to Grover Rotomatic tuners… albeit ones with oddly square-edged buttons.

In visual terms this is arguably the pick of the trio. The sharp-pointed Florentine cutaway might be divisive, but we’ve seen this silverburst finish with binding and pinstripe purfling on Les Paul Customs before and it’s a strong look. Adam Jones of Tool almost certainly agrees. 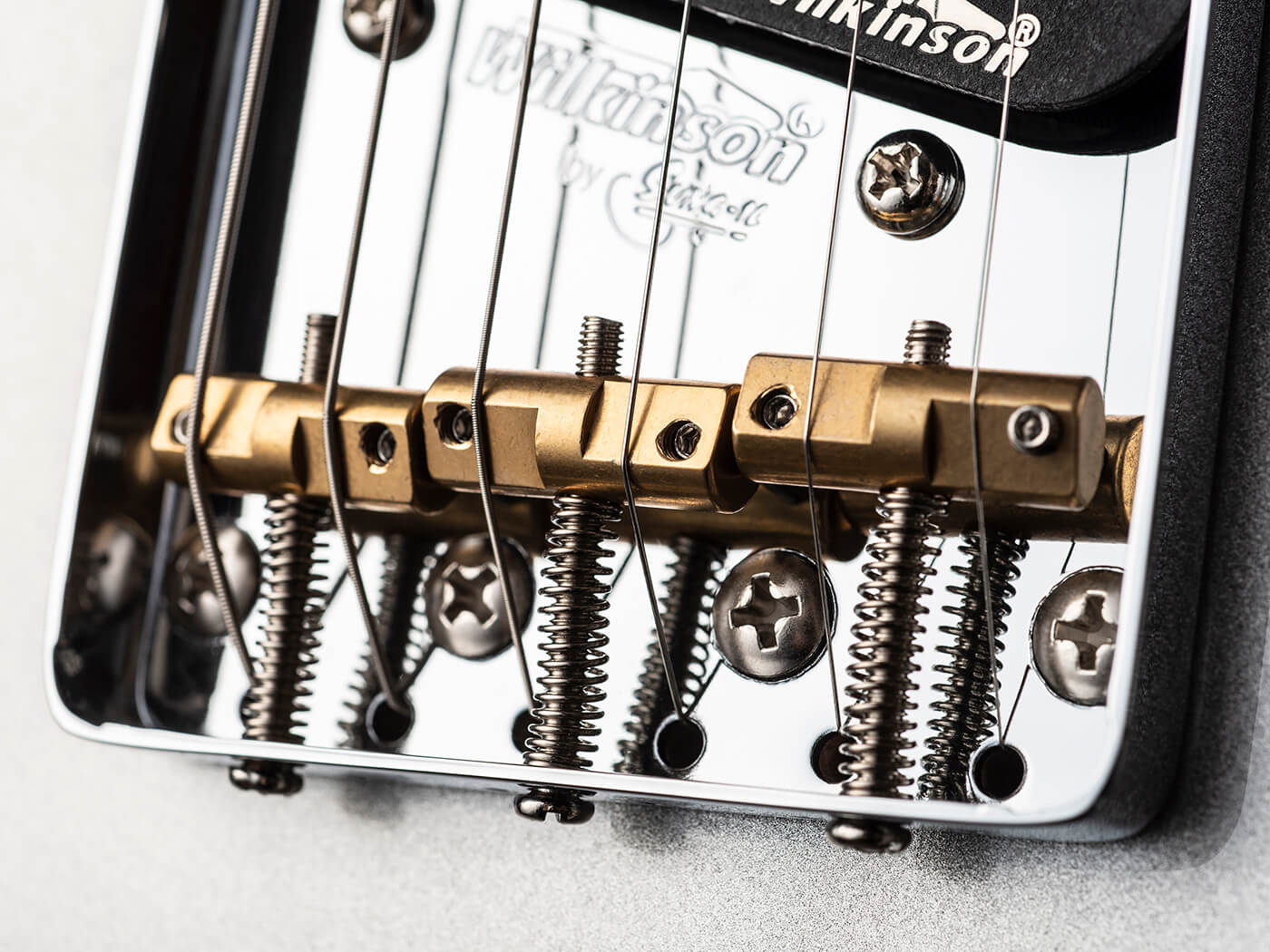 For historical reasons it has to be the V75 that steps up first, with a nearly-clean black-panel amp on duty to bring out the sparkle in its twin alnico single-coils. Our immediate impression, in both bridge and middle positions, is that this is a guitar with plenty of twang.

While it lacks the fresh and frisky cluck of our reference Telecaster, making it less appealing for open chords and arpeggios, the Vintage’s natural midrange aggression rewards expressive playing – especially with a touch of British-voiced crunch. 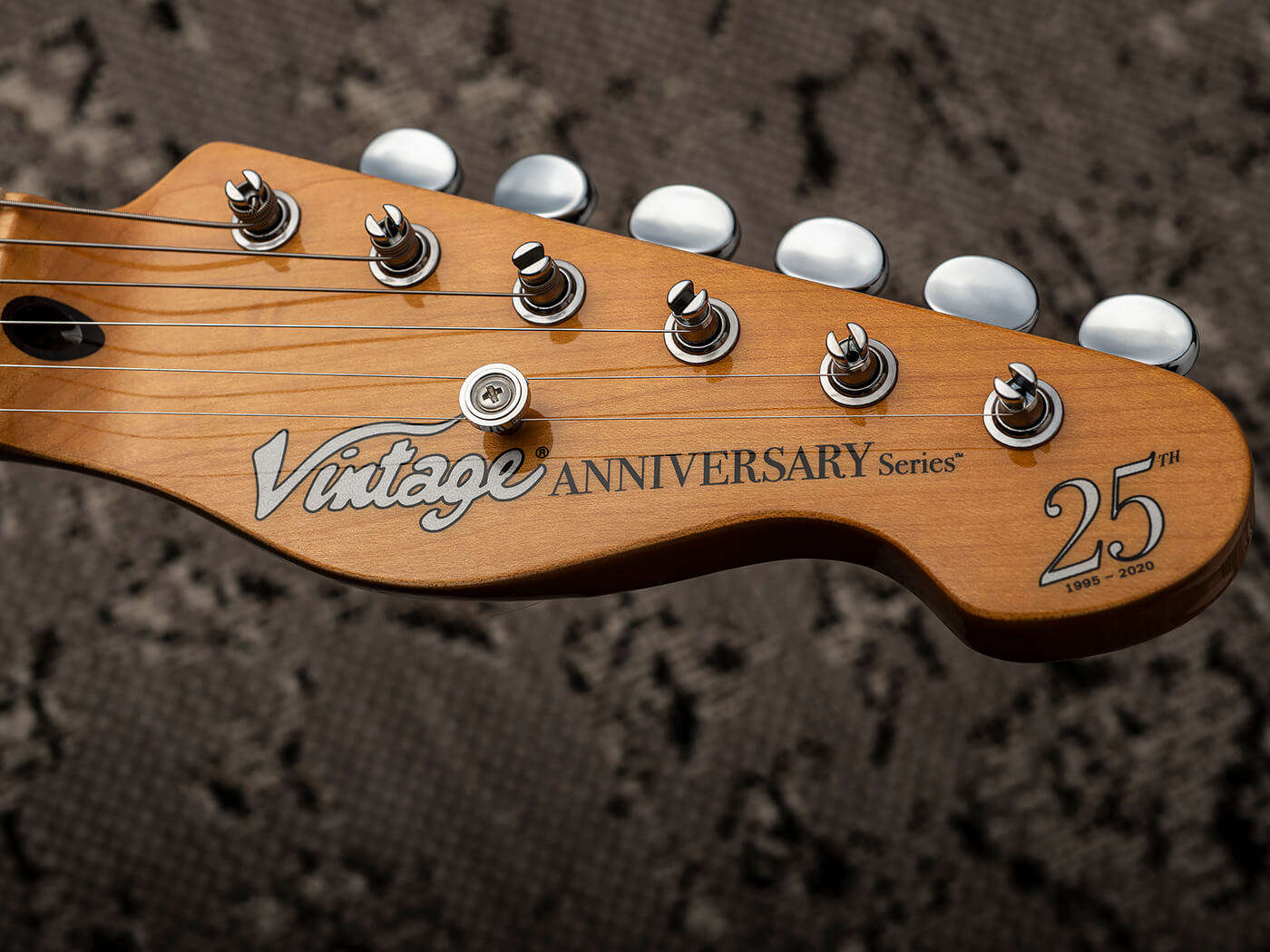 The fact that this is the only model in the series without a rounded-off neck heel might imply someone at JHS thinks T-types are not for lead players, but give this thing a bit more gain and it’s only too happy to supply some ferocious ice pickin’. The neck pickup doesn’t exactly sing but it’s not problematically dull either, rounding out a clean sweep of solid Tele-style tones with the emphasis on punch rather than prettiness.

If you’re looking for a more airy top end, you’ll find it in the V6H. Both single-coils – in fact, all three once you’ve managed to get a grip on that awkward pull-up tone knob – are voiced to please traditionalists, and with that stiff-ish vibrato arm involved it’s hard to play this one for more than two minutes without getting sucked into a Hank Marvin impression.

The in-between settings offer maximum quack, with a slight drop-off in treble, and that remains the case when you mix the middle pickup with the bridge humbucker in full-fat mode. On its own the ’bucker is unsurprisingly much darker-sounding with both coils firing, but there’s still bags of midrange snap, making this an easy shortcut to chunkier solo tones. As a bonus, there’s no major drop in output level when you pop it back into coil-split mode.

So finally we come to the V100. Ceramic humbuckers usually spell rock power rather than jazzy sensitivity and there’s nothing going on here that’s going to force a rethink of that assumption. The DC resistance readings suggest a striking difference in power – over 13 ohms for the bridge unit and barely 7 for the neck – but who needs a multimeter when you’ve got ears? In practice, the bridge pickup is a bit of a rock beast but it’s not noticeably hotter than its fretboard-nudging neighbour. 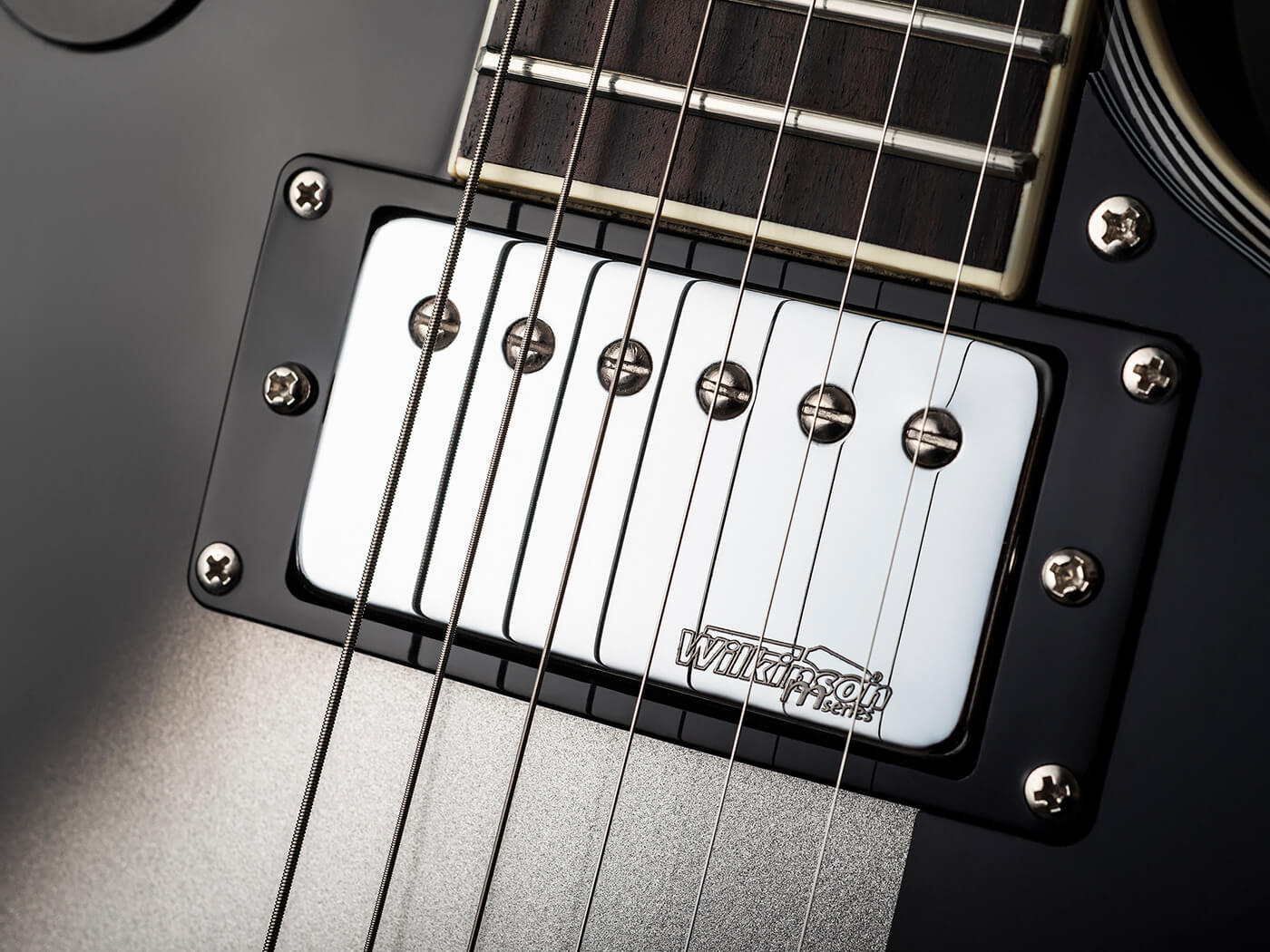 In all three positions this is a guitar that clearly wants to cut through with midrange honk rather than top-end zing – and the more gain you feed it, the better it sounds. If you pride yourself on your right-hand sensitivity, you might find it a frustratingly blunt instrument; but if you like to put one foot on your coffee table and pretend it’s a stage monitor, this could be just the hard-rocking axe you need.

We’d struggle to pick a favourite from this trio, as you can probably tell by the matching scores. The overwhelming impression is that, as long as you’re down with that bold Silverburst, you’ll be in thoroughly safe hands with any of them. 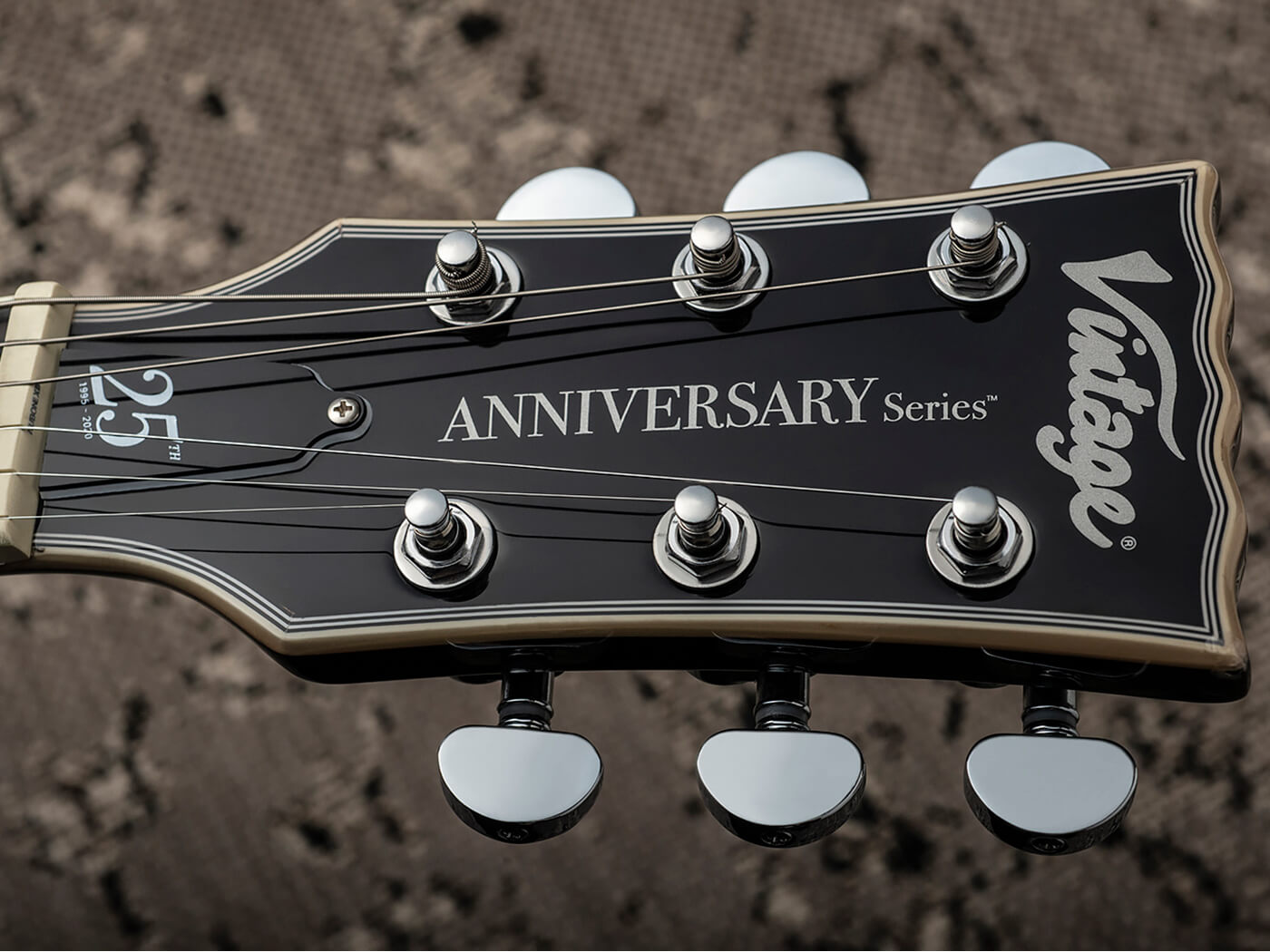