Great necks, fine looks, many of the design innovations of USA-made Music Mans and all at a fraction of the price, Sterling guitars are the dark horses of the budget market. Review by Hayden Hewitt. 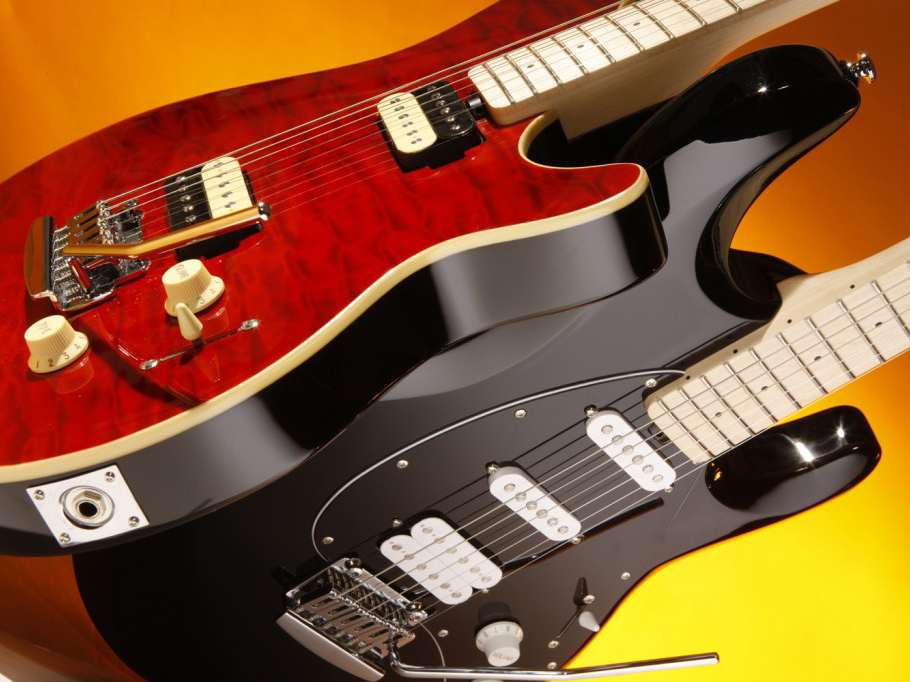 Whether they are your ‘thing’ or not, there can be no argument that Music Man guitars are often very good to exceptional – but that level of quality comes at a cost. If you’re a beginner or on a budget there’s little to do but stare at the shiny, expensive things before plonking your cash down on something else.

The Sterling line is Music Man reaching out to those who might not have the cash to put down for the real thing but still want to have a taste in terms of looks and feel. Up to now the guitars have always been solid, if not particularly capable of setting your pants alight. Time to see how these new toys on the block fare.

AX3
Based on the Axis model from Music Man, the AX3 is the plusher-looking of our two examples. With its quilt maple veneer, tasteful cream binding, and see through red finish which contrasts nicely with the plain maple neck, it’s a looker. The Axis range came from an early collaboration between Music Man and Eddie Van Halen, and the DNA is certainly still there.

The neck is the highpoint here, even beyond the opulent looks. Finished in a satin lacquer and very well shaped, it transcends its budget origins and feels properly grown up and far less of a compromise than the price tag suggests. Once we’d spent half an hour playing the newness out of it we were definitely impressed beyond the whole ‘good for the money’ cliché. The 22 well-finished frets combined with the neck itself make for a very pleasing playing experience, and there isn’t really anything to find as far as niggles go in the finishing or construction.

Sounds
The AX3’s unbranded humbuckers come across as a compromise. They’re medium to high in output and can certainly drive an amp, but their budget nature colours things more than a little. Played clean there’s nothing bad, just a slight flatness and lack of sparkle. Adding more top on the amp helps, but it can get a touch brittle on the bridge pickup. The neck pickup offers more warmth at the expense of a little clarity. The coil tapped sounds via the auto-tapping five-way switch offer versatility, but the inherent compromise of coil tapping is always evident.

Adding some gain helps things along, and the pickups in the AX3 seem to be a lot happier when the going gets dirty. The bridge pickup is nicely crunchy; it can never quite shake off a slight wooliness, but there’s enough drive to satisfy the gainiacs and plenty of juicy sustain for lead work. The neck pickup does everything you’d expect: nice warm lead lines and enough syrup to make sweep picking less of a chore. We still had the feeling of being ever so slightly let down, but the build quality of the guitar itself is what shows the pickups up for the budget units they are. In the AX3 you just want more, and we do genuinely like the guitar.

Silo3
The Music Man Silhouette has been around forever. A swooping and curvaceous alternative to more established double cutaway guitars, it’s long been enjoyed for its build quality, comfort, and playability. The Silo 3 echoes these qualities very nicely indeed. Like the AX3 the neck is a joy to play and the guitar is extremely friendly in terms of ergonomics. The look always comes across a little dated to this reviewer but in a good way as opposed to a brown corduroy flares kind of way.

The AX3 has the same vibrato as the AX3. This unit performs reasonably well so long as you keep its limitations in mind… more for a gentle flutter rather than prolonged divebomb abuse. Anything too enthusiastic sees you returning to a tuning perhaps previously undiscovered by modern man. The same satin-finished maple neck and 22 frets are in evidence, and they provide every bit of the positive feel of the AX3, although it has to be said this Silo doesn’t feel quite as ‘right’ as the AX. It wasn’t any one thing in particular but it did have a little more of the spongy feel we sometimes associate with more cost-conscious guitars. An H/S/S pickup arrangement completes the picture.

Sounds
Plugged in the Silo has a slightly softer character than the AX, a little less forceful. The bridge humbucker will still cover most of the same sonic ground but with a touch more air, and it encourages you to noodle around far more than could possibly be healthy. Played clean a bridge humbucker is not our favourite sound but using the five-way to bring in the single coils opens up a lot more tonal real estate. From hard rock through a reasonably good fist of a woody single coil in the neck position with some funk in between, the sounds here are perfectly acceptable. Some of the budget restraints remain but the versatility overshadows that a little.

Given some gain the Silo3 makes a better fist of crunchy tones but things can quickly – and inevitably – get a little noisy with the single coils. You won’t care too much, though, because one of life’s great joys is running a neck single coil through a crunchy amp. Crank the gain and the single coils do run out of puff before too long but the bridge humbucker will hang in there unless you hope to get too brutal.

Verdict
When you find yourself nit-picking over a guitar as if it cost three times its actual price you know you’re on to a good thing. We’re often impressed by lower-cost guitars, and these Sterlings are no exception. In terms of playability and finishing they’re top notch and given the low price they cross the line into ridiculously good. Yes, the pickups are a weak point but that’s easily fixed, and it’s not as if they’re so awful you couldn’t live with them… far from it. Overall you won’t go far wrong if you’re looking for a wallet-friendly guitar and you like the cut of Music Man’s jib. 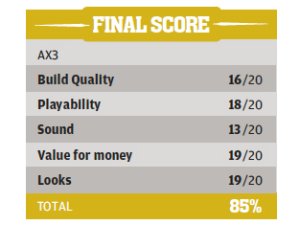 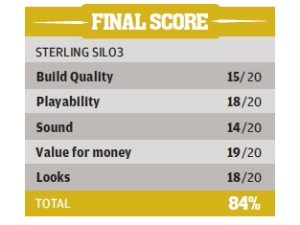