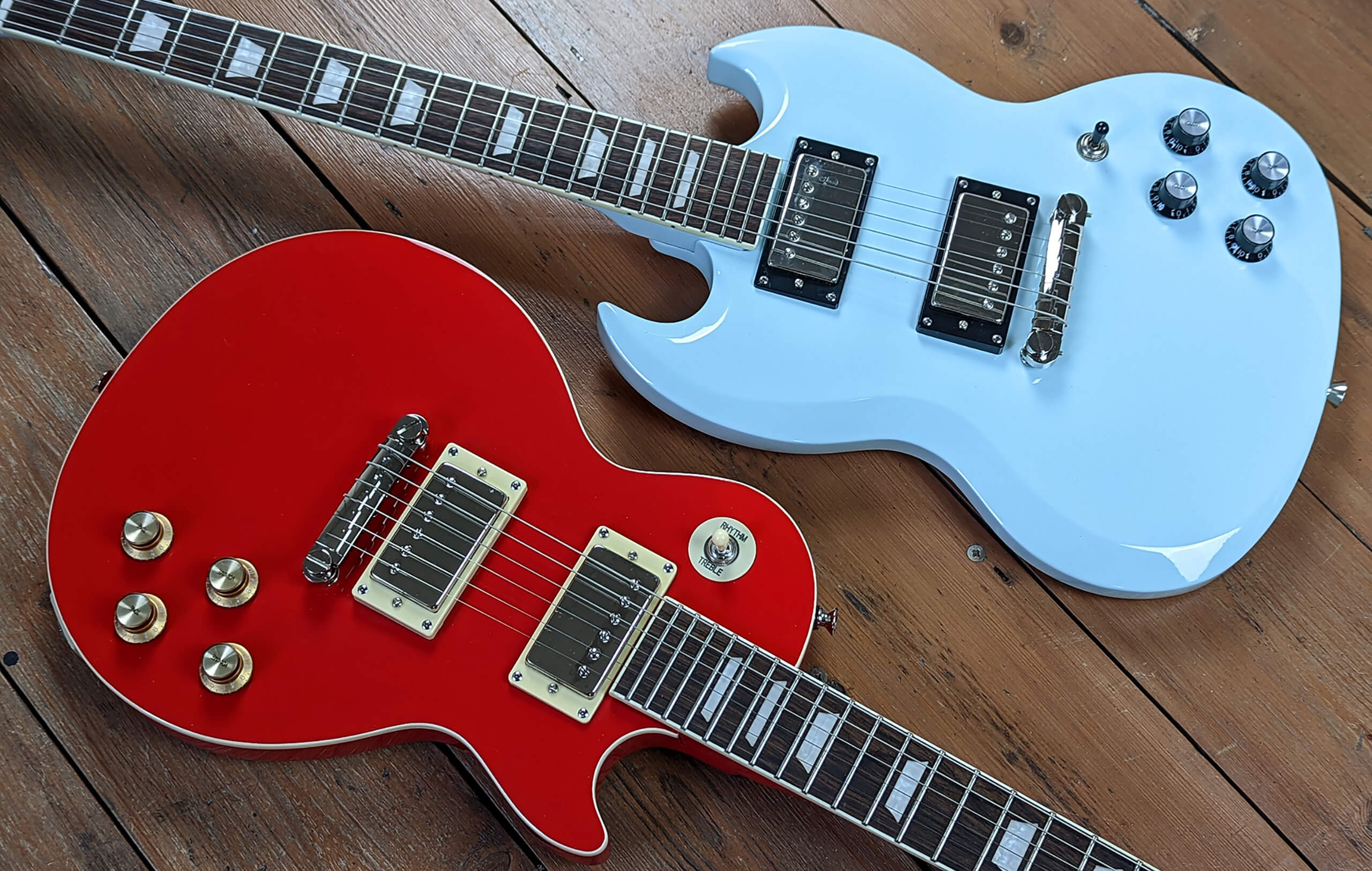 These new 3/4-sized electrics have been designed to feed the continuing guitar boom among the younger generation – so we asked a Gen Z girl to help us test them.

Parents used to worry about their teenagers smoking, drinking and falling in with street-corner ne’er-do-wells, but nowadays it’s much worse than that: they’re playing the guitar.

You’ve probably seen news stories about the recent explosion in guitar sales, and it seems this has been largely fuelled by new players – many of them young, and at least half of them female. But is this demographic being well served by the current market? Epiphone thinks not… thus the Power Players Les Paul and SG.

These aren’t the first electric guitars to take classic designs and shrink them down for smaller hands, but the idea is that they aren’t just for kids: the Power Players are that little bit higher-priced than most 3/4-sized models, with “​​high-quality components and excellent build quality” that should make them good enough for more experienced players to enjoy too. 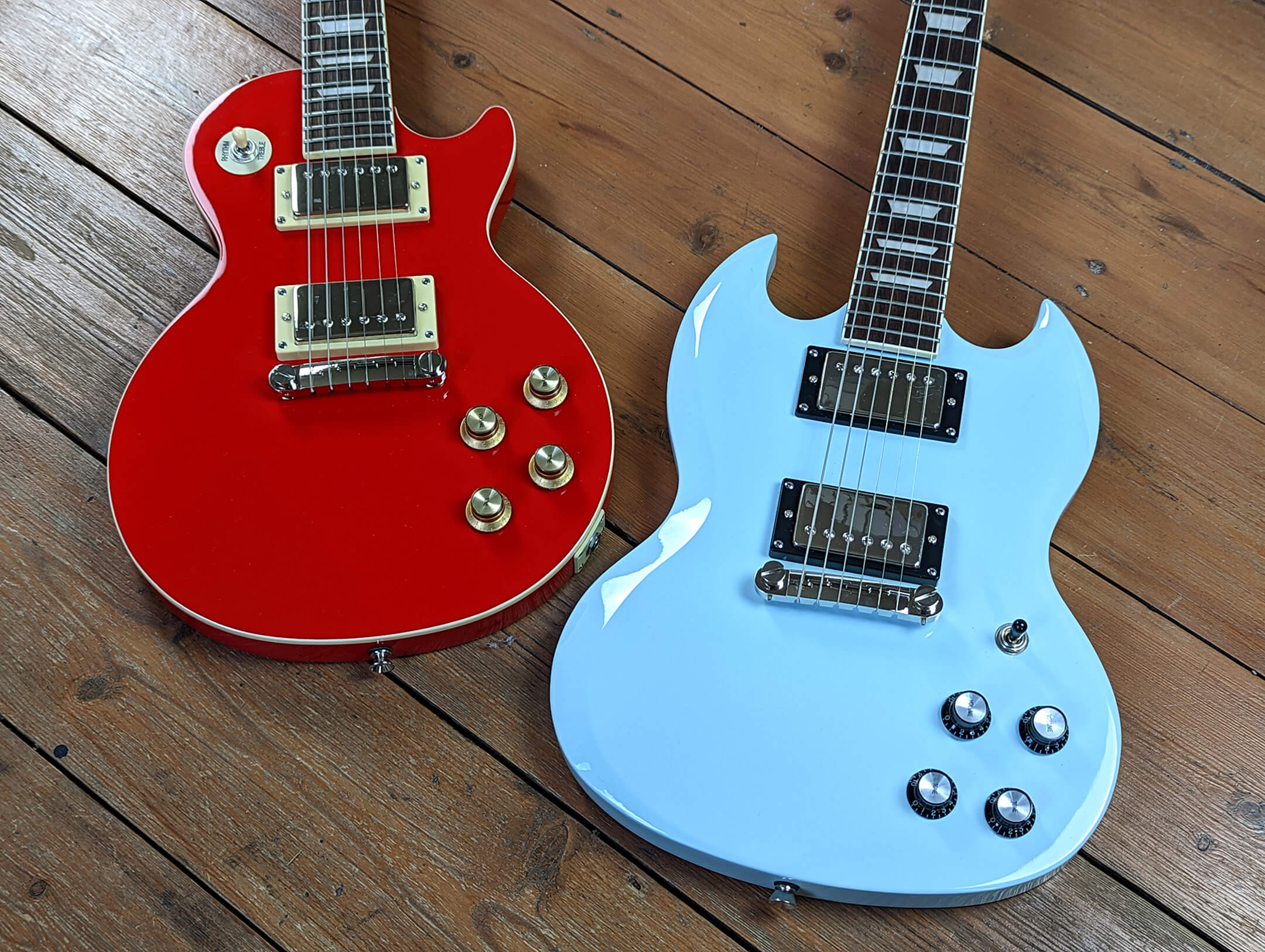 There’s only one way to check that: have them tested out by both a world-weary bald man and an eager zoomer. And as luck would have it, there’s one of each in my house: me and my 16-year-old eldest daughter, who finally – finally, oh my god, finally!!! – took an interest in her dad’s lifelong obsession just a few weeks ago.

Up to now she’s been finding her way with a Harmony Silhouette, chosen because it’s about the easiest-playing guitar I own (and also gorgeous). The plan is to leave one of the Power Players with her for a couple of weeks so she can hop between that and the full-size instrument for comparison.

“I prefer the shape of the blue one. The red one is just… it seems more like a full-size guitar and looks really weird at this size – I don’t think it suits it.”

Well, that’s an interesting response – maybe the Les Paul shape is too ‘classic rock’ even for someone who doesn’t know what classic rock is? It could also be that she’s somehow inherited her old man’s preference for SGs, or that she’s simply right and LPs don’t shrink so well.

Next step is for her to pick the SG up and actually start playing it. The difference in size and weight is immediately noticed, and she’s also impressed by the fret markers on the neck binding, which stand out much more than the little white dots on the Harmony’s unbound neck. 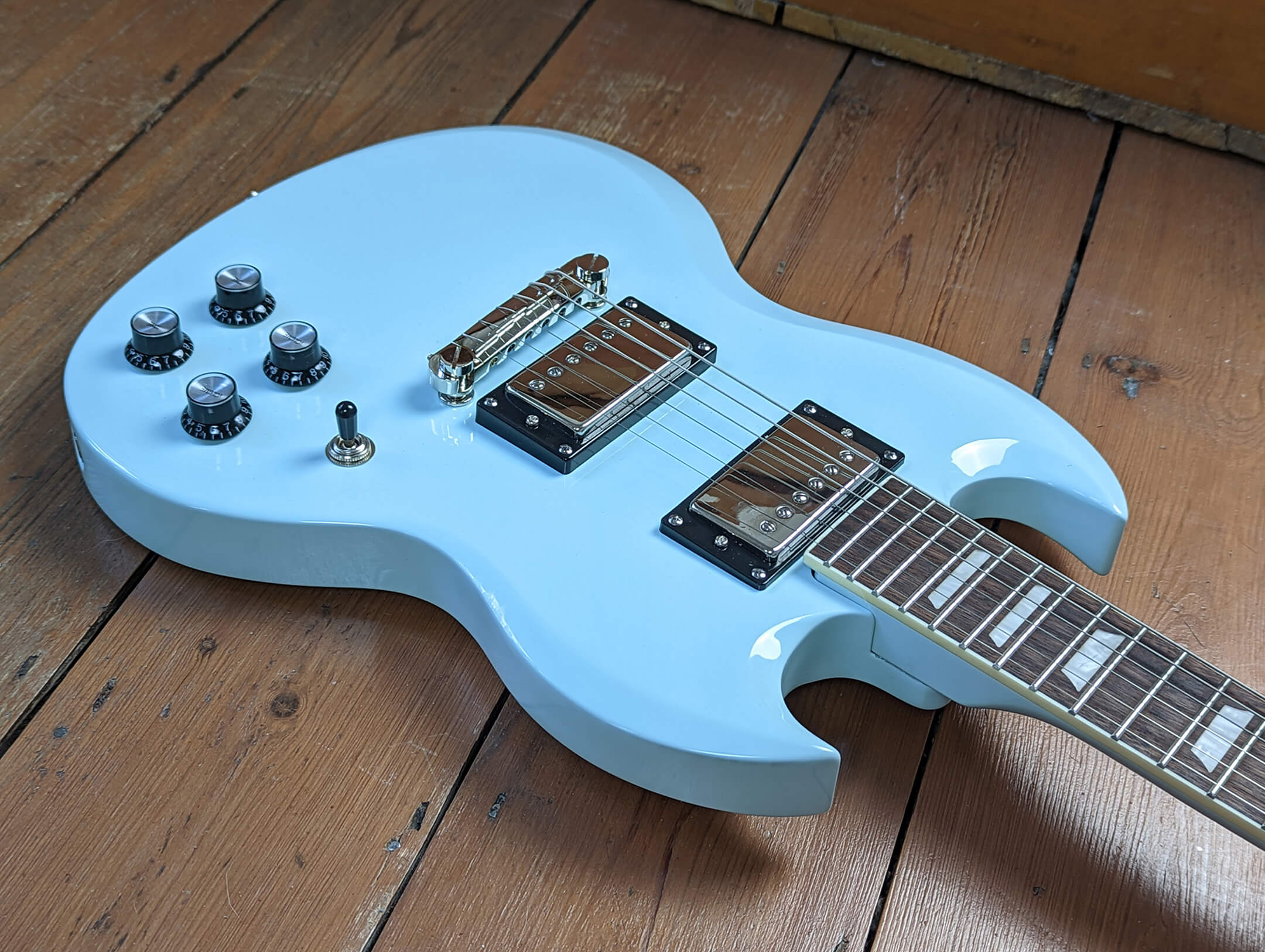 OK, so let’s leave girl and guitar to get better acquainted while I take a closer look at the Les Paul and check out the specs in more detail.

The first thing to note is that, while each guitar comes with a soft case folded up inside its gaudy box, this is unpadded… and so small that it’s an effort to get the zip around the headstock. There’s your first candidate for an upgrade.

As for the instruments themselves, construction-wise they aren’t strictly ‘the real thing’. That is to say that the necks are bolted on rather than glued in, and the LP has a flat all-mahogany body with no maple cap. The reduced scale length of 22.73 inches will also make a huge difference in terms of tone and playing feel, of course, but that’s all part of the 3/4-size deal.

The electrics are just as you’d find on a full-scale Epiphone, with a 700T humbucker at the bridge and a 650R variant at the neck. These are basic ceramic pickups, wired up to cheap little pots, but they should do a solid job.

The hardware also seems decent, with unbranded tuners at one end and a ‘lightning bar’ wraparound bridge at the other – the smart choice for a smaller body, where a separate tailpiece might make things look crowded. 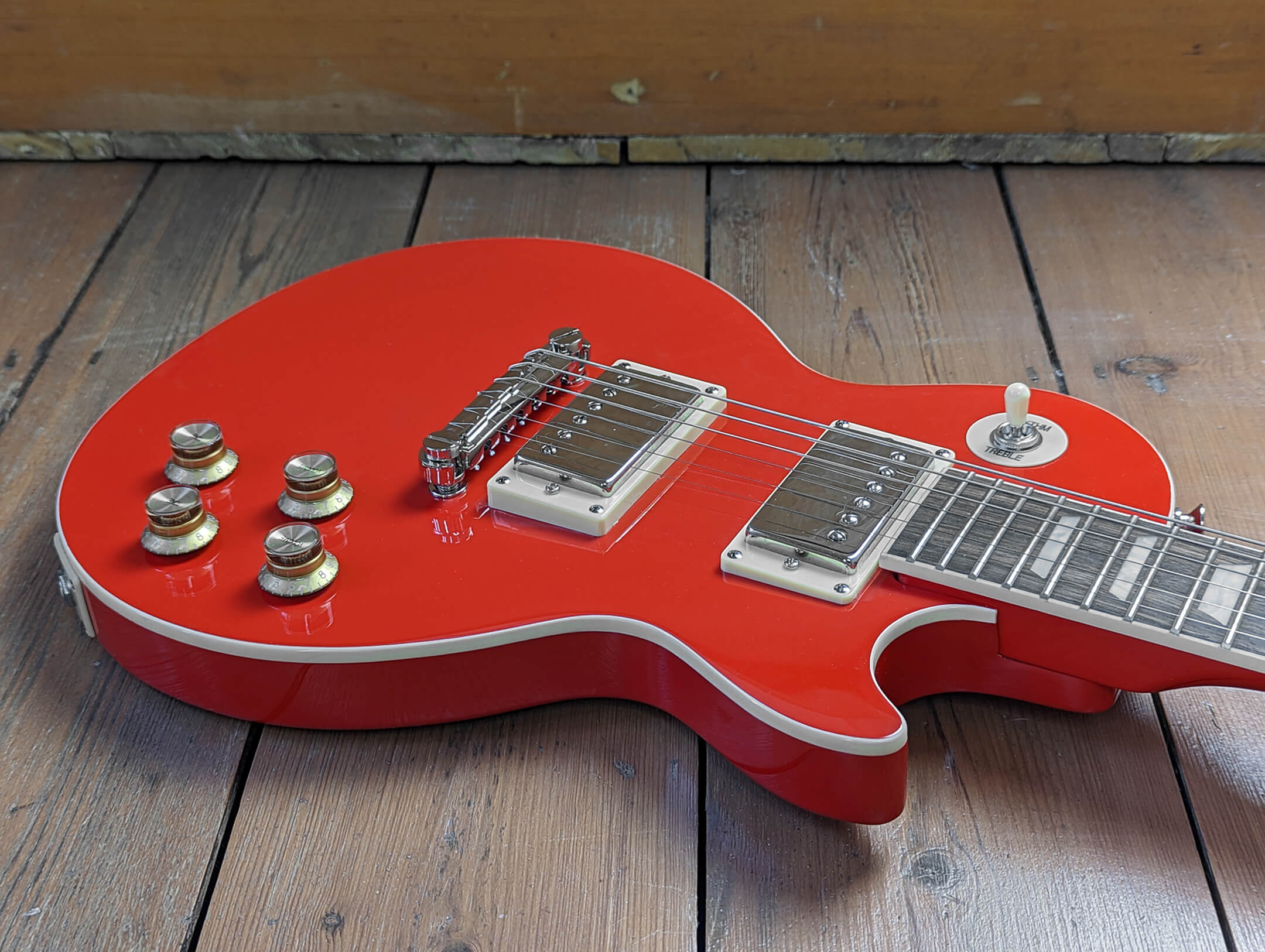 The overall build quality of both our test guitars is sound, with reasonably smooth fret ends and no issues with action or intonation. What does feel slightly odd is the string tension: gauge 10-46 on a scale this short means they’re borderline flappy, and easily stretched out of tune by extravagant bends. For an adult, they’re begging to be switched up to 11s; a delicate sprog might have a different perspective, however…

As for the tones, I have to say I’m a little disappointed by the Les Paul. The pickups are powerful in output, which is no bad thing in itself but does in this case lead to somewhat overbearingly thick sounds on all three settings. It pushes a low-wattage amp into breakup even with the preamp volume so low it’s barely on, and that breakup feels loose and gloopy rather than crisp and crunchy.

Oddly enough, sneaking into my daughter’s room for a go on the other guitar while she’s at school, it quickly becomes clear that this is not an issue for the SG: despite its identical innards and broadly similar build, it has a fresher, more open voice with plenty of twinkle in the middle position. Yep, this one sounds like a proper Epi. It’s really rather nice.

The difference is a lot less pronounced once there’s heavy distortion involved, but it remains a head-scratcher, especially as the DC resistance readings from the pickups are fairly well matched. Anyway, the lesson – as ever at this kind of price point – is to try before you buy if that’s in any way possible. 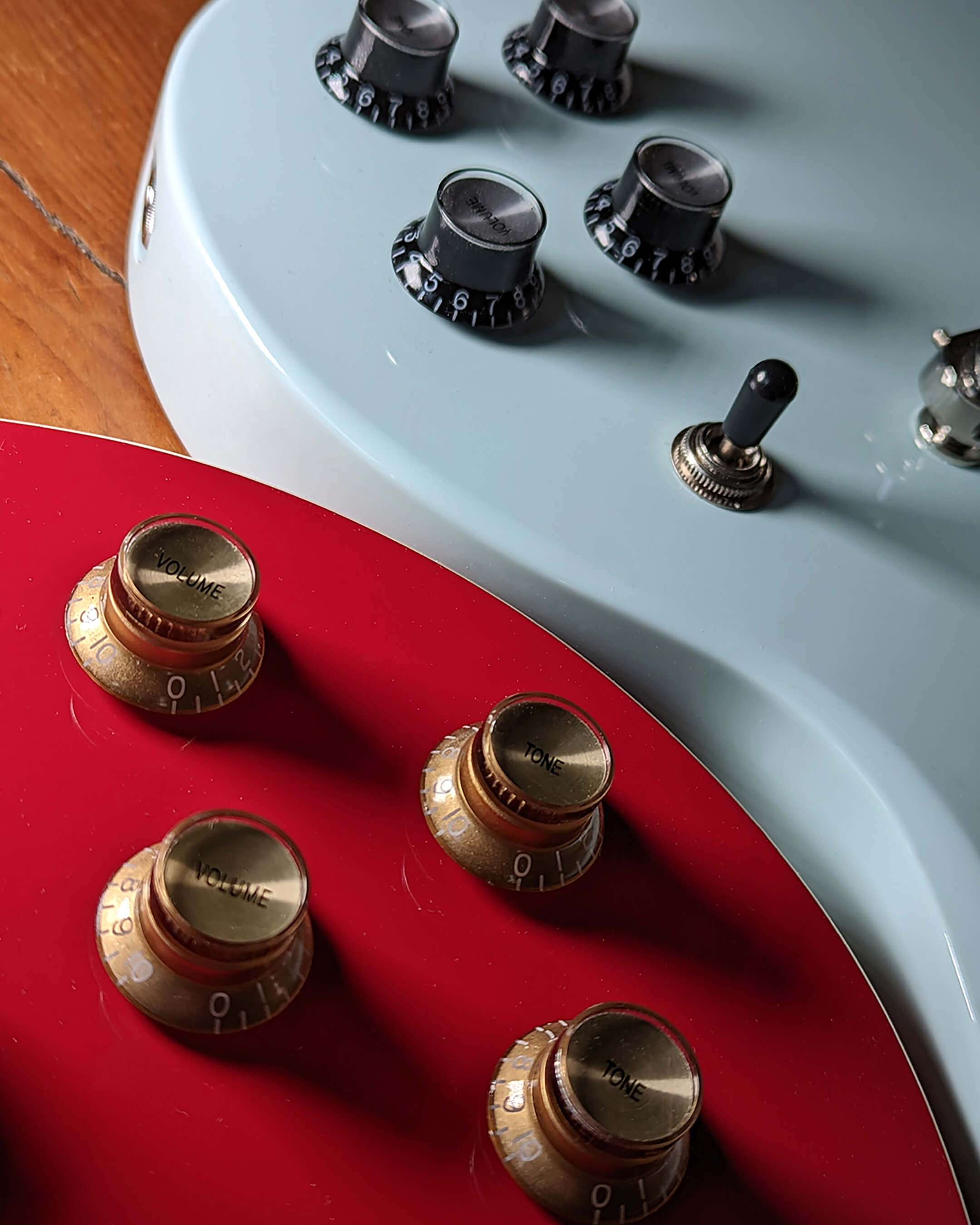 So, how has our teenage tester been getting on with that SG compared to her usual Harmony?

“It’s easier for reaching notes with my pinky and stuff,” she says. “But also everything is a bit closer together so it can feel cramped, which I don’t like very much. But that’s a really small thing. The main benefit is that I have to press less hard on the strings, which is good.”

So would you feel more comfortable going forward with the Epiphone than with a full-size guitar?

“Oh, I would keep going with the little one until I was really confident. And then I would go to the normal one, because you don’t want to play a baby guitar forever.”

Jeez, they grow up so fast. And what this seems to suggest is that the Power Players are already almost undersized for a 16-year-old girl. I might need to have a word with her little sisters…