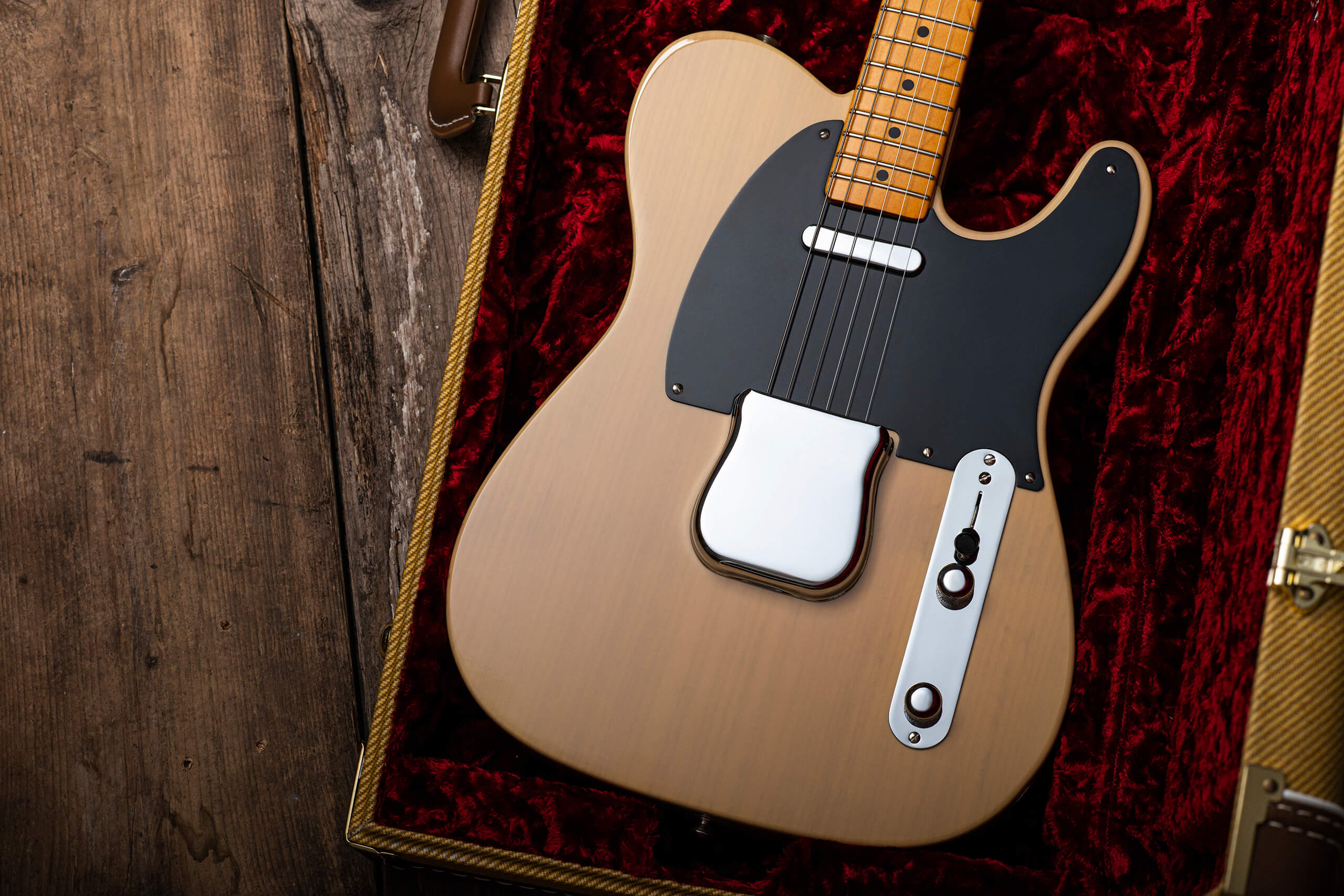 Most of us will never get the chance to see a vintage Broadcaster in the flesh, let alone play one, so Fender’s 70th Anniversary production model might be the next best thing.

Rather than being an exact replica, this 70th Anniversary model stays true to the spirit of the original while potentially broadening its appeal.

The very earliest Esquire necks had no truss rods, but musicians returning to California from the Deep South via Canada complained that their Esquire necks were susceptible to temperature fluctuations. Leo soon conceded and reinforcement was added accordingly. Pancake pine bodies were another early Esquire feature, but all Broadcasters had ash bodies. 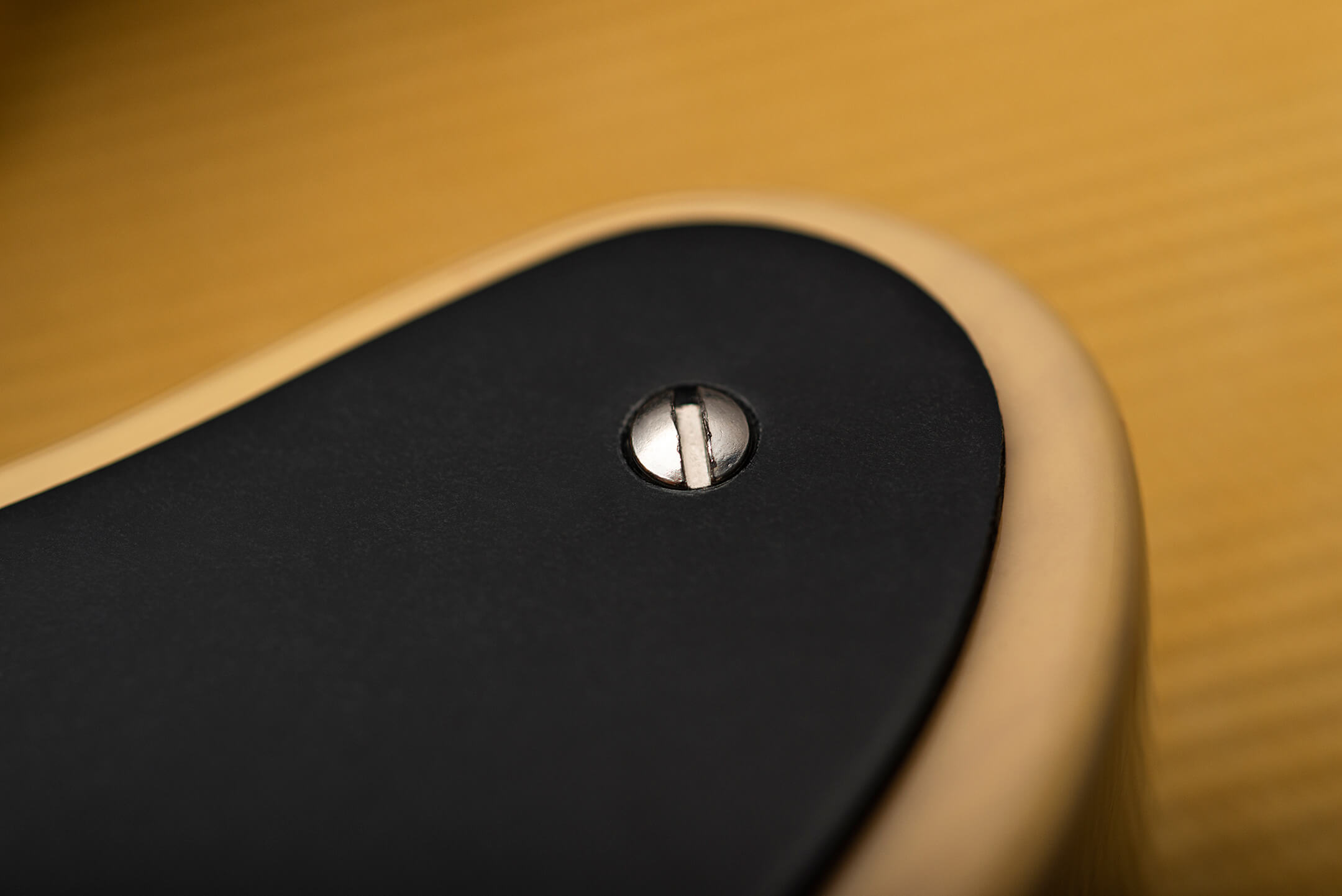 One prototype (serial number 0009) reveals that Fender was considering a dual-pickup design perhaps as early as 1949. It was owned by a Fender amplifier builder called Sam Hutton, who used it to test amps, and it was mostly made from lap steel parts – including a lap steel pickup in the neck position.

Eventually Fender developed a metal-covered neck pickup, and it has remained a fixture in Broadcasters, Nocasters and Telecasters ever since. But what are the differences between these three iconic models?

Besides a wire channel drilled from the neck pocket to the bridge pickup rout – rather than a diagonal wire rout – and steel saddles on earliest Broadcasters, it boils down to the headstock decal and the wiring.

Fender was obliged to change the Broadcaster name after a telegram from Gretsch pointed out that the Brooklyn company was already using ‘Broadkaster’ for a line of drums and banjos. It’s been suggested that Leo’s frugality was the reason he had the Broadcaster name snipped off the decals, and the resulting guitars – with ‘Fender’ the only word on their headstocks – became known as Nocasters. 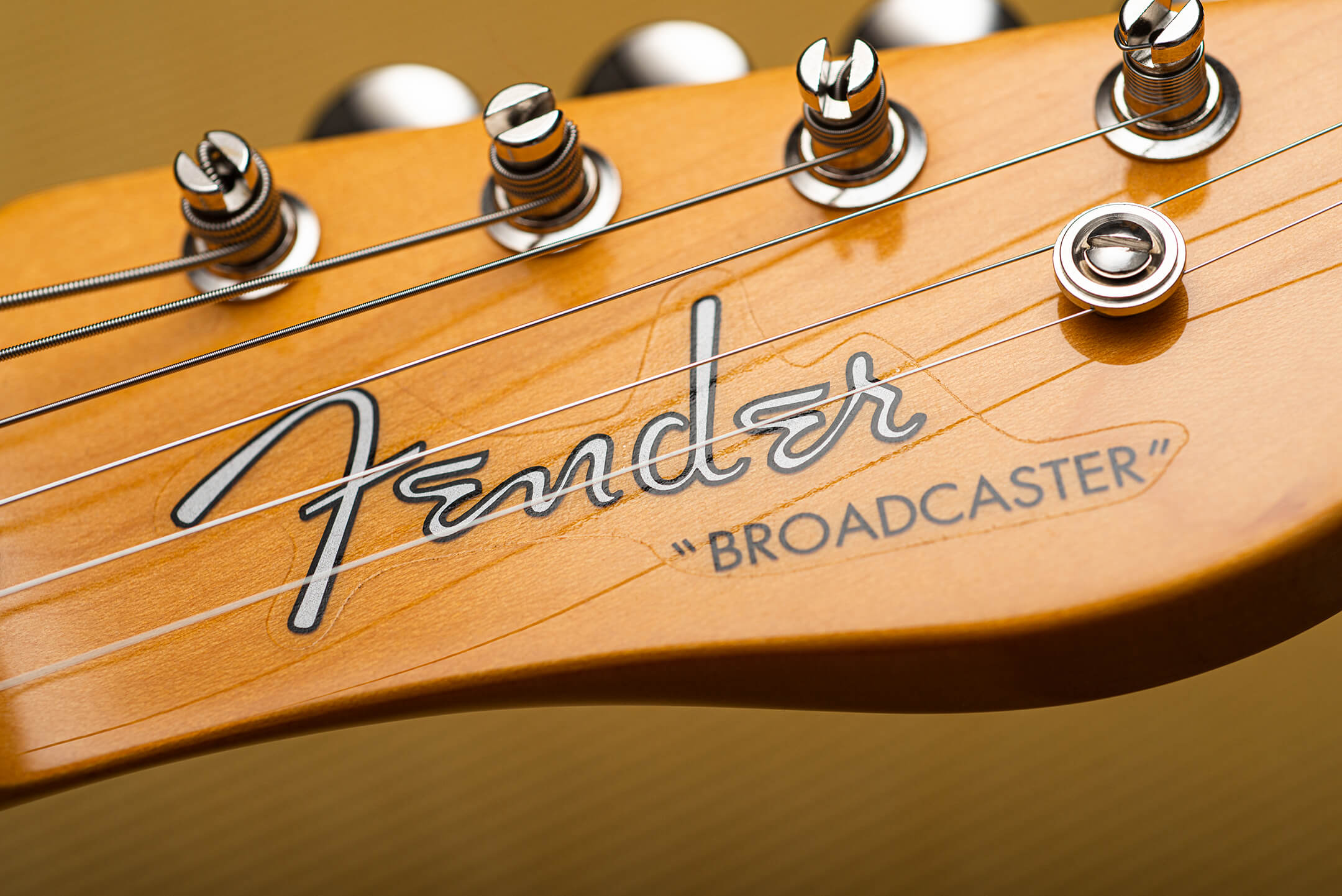 Although Fender needed to stop using the Broadcaster name, it didn’t have to stop producing guitars. Since the company had no other model at that time, and no decision on a new name had been taken, modifying the decals kept the production line moving.

Presumably the new name ‘Telecaster’ started appearing once the original batch of decals ran out in the fall of 1951. It’s estimated that around 200 Broadcasters were made between late 1950 and early 1951. Demand for Fender guitars was increasing, so the number of Nocasters and Telecasters made in 1951 alone greatly exceeds the total number of Broadcasters that were made.

As for the wiring circuit, the scheme devised for the two-pickup Esquires and Broadcasters had a master volume but no tone control. Instead, the neck pickup was tied to a treble bleed capacitor for a pseudo bass tone. The middle position selected the bridge pickup and the back position combined both pickups, with the second knob acting as a blend. 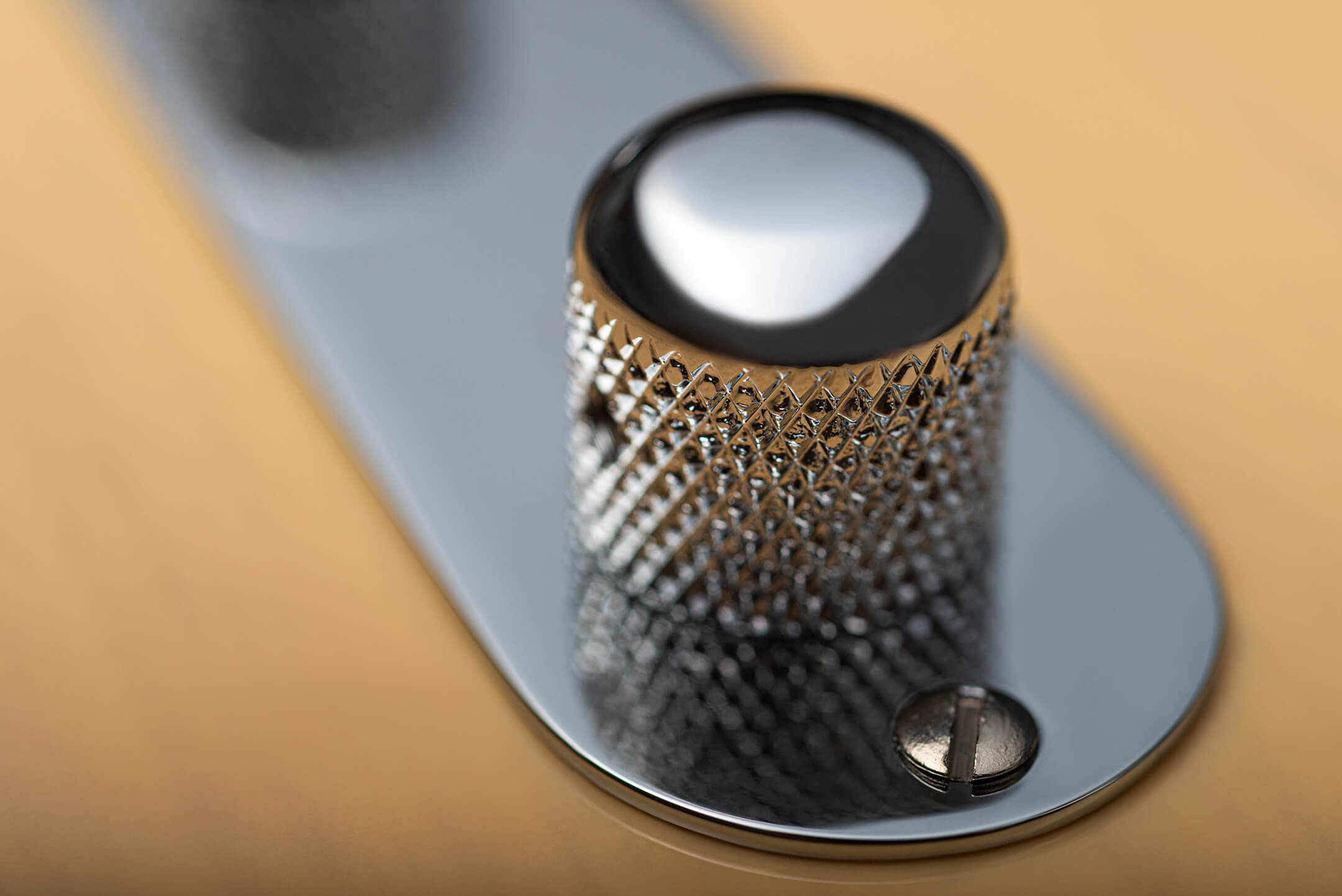 All the Nocasters had this wiring too, as did the earliest Telecasters, but Fender changed the circuit around May 1952. The bassy neck preset was retained, with the middle and back positions corresponding to the neck and bridge pickups individually – both of which were connected to the tone control.

Other Broadcaster features include closed-shell Kluson tuners, misaligned string ferrules and maple truss rod plugs, but that’s about it. 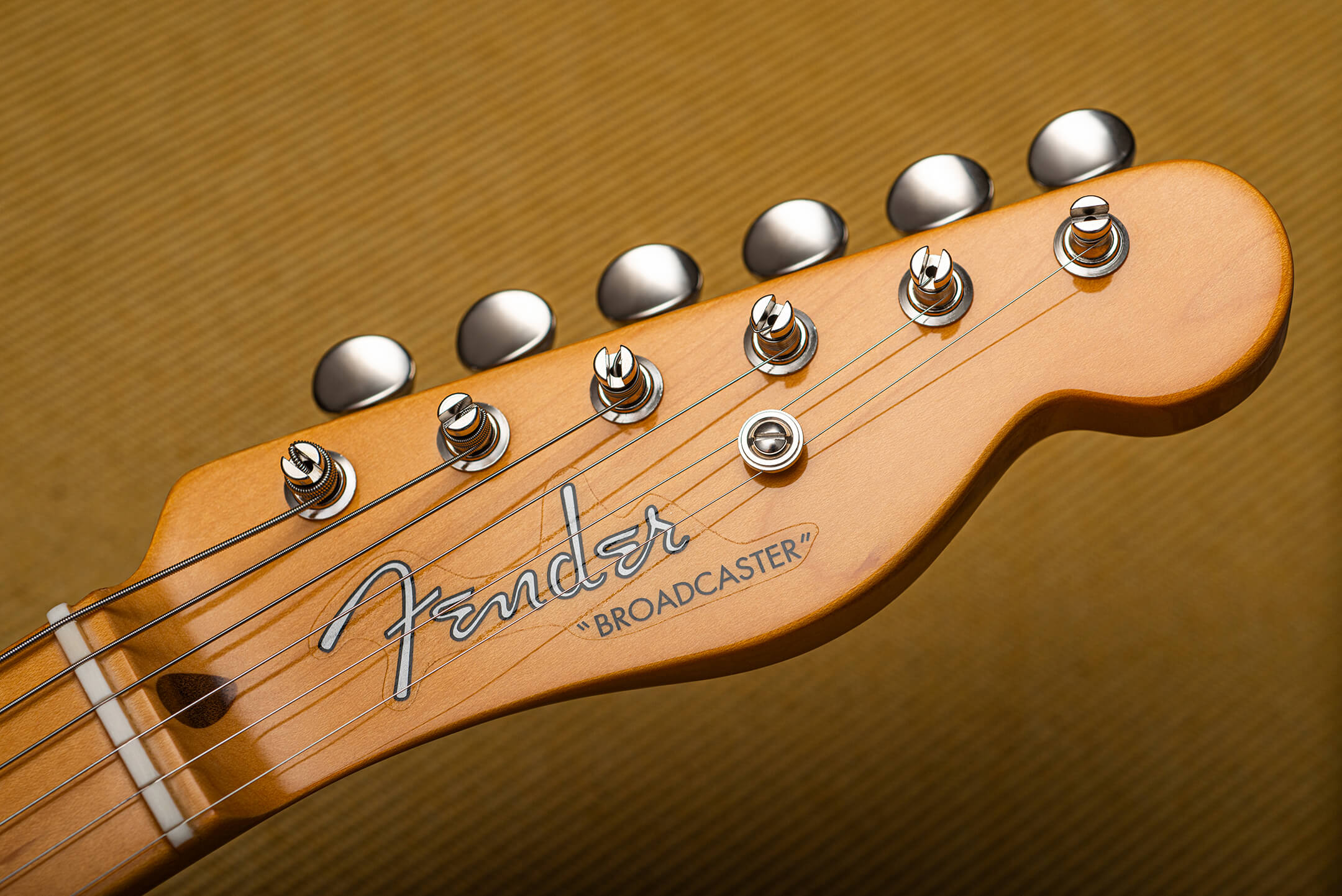 We recently had the rare opportunity to spend some time with an original 1950 Broadcaster courtesy of ATB Guitars and, with that instrument still firmly lodged in our memory banks, we are delighted to get our eager mitts on another Broadcaster – albeit one that’s 70 years its junior. As anticipated, Fender has done a tremendous job on the decal and various other features associated with Broadcasters, but not everything is quite as it was. In some regards, that’s no bad thing.

Let’s begin by establishing the points of similarity. The one-piece maple neck is a key ingredient, while ash was Fender’s body wood of choice until the latter half of 1956. This body appears to be made from a single piece and although the colour may be a little pale compared to the darker ‘butterscotch’ generally associated with early Fender guitars, the grain lines have a vintage-correct blueish grey look. Nitrocellulose lacquer is used for the body and neck. 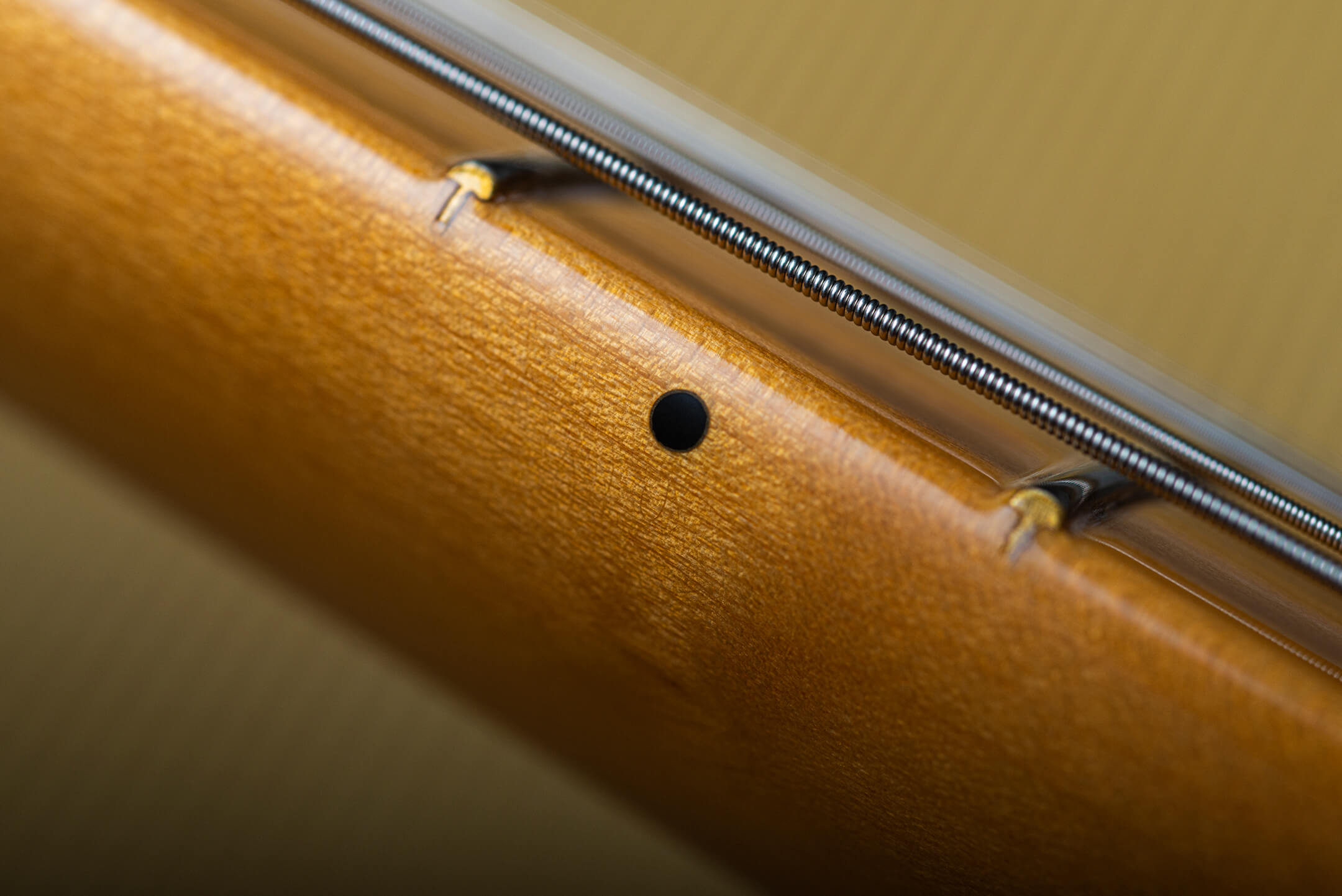 The fundamental building blocks are there, but they differ greatly from the aforementioned vintage Broadcaster. That example tipped the scales at 9.63lb but our review guitar weighs a fraction under 8lb. Nacho Banos’ The Blackguard book reveals that early Fender guitars varied widely in weight – we prefer the lighter versions.

The vintage Broadcaster’s neck had the finest 1950s Fender profile we have ever encountered, with Tadeo Gomez producing a piece of soft V sculpture that’s pretty much the most comfortable and playable neck imaginable. The 70th Anniversary neck feels very different, but its profile – more of a deep C than the U described in the official specifications – is a lot like the vintage 1952 Telecaster we featured in these pages earlier this year.

Crosshead screws didn’t begin featuring on Fenders until 1951 and the transition wasn’t complete until 1953, so this 70th Anniversary model has the appropriate flathead screws – all besides the truss rod adjuster. We are pretty impressed with the control knobs too. Having a genuine 1954 set on hand with which to compare them, if they were just a touch flatter on the top they’d be perfect. 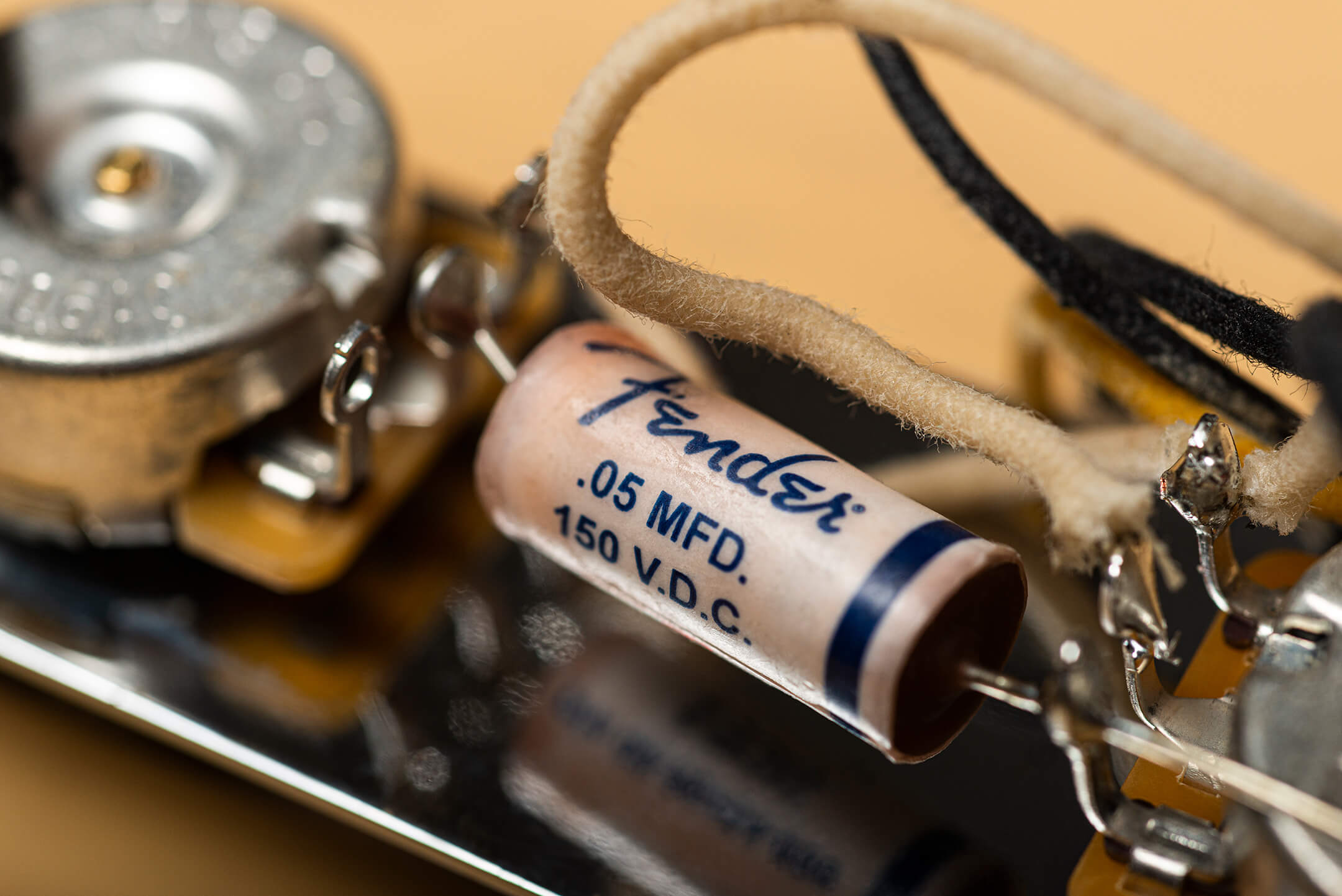 One of the most charming aspects of early Fenders is the inventive way the company used the materials that were available at the time. The iconic black ’guards are a case in point, and they were cut from the same vulcanised fibreboard material that was used to make Fender’s amplifier eyelet boards. Fender sprayed the pickguards with nitrocellulose, polished them up and most have held up pretty well over the years. The Anniversary model’s scratchplate is described as ‘one-ply black phenolic’, which is more than close enough.

Fender’s approach to the control configuration is not vintage correct for any Broadcaster or Telecaster up until 1967, but few modern players will complain about the three-way blade pickup selector’s bridge/bridge and neck/neck options and simple master volume and tone control arrangement. Under the hood, there’s one of Fender’s fancy paper-in-oil tone capacitors too, along with a set of Custom Shop Designed ’50-’51 Blackguard pickups. 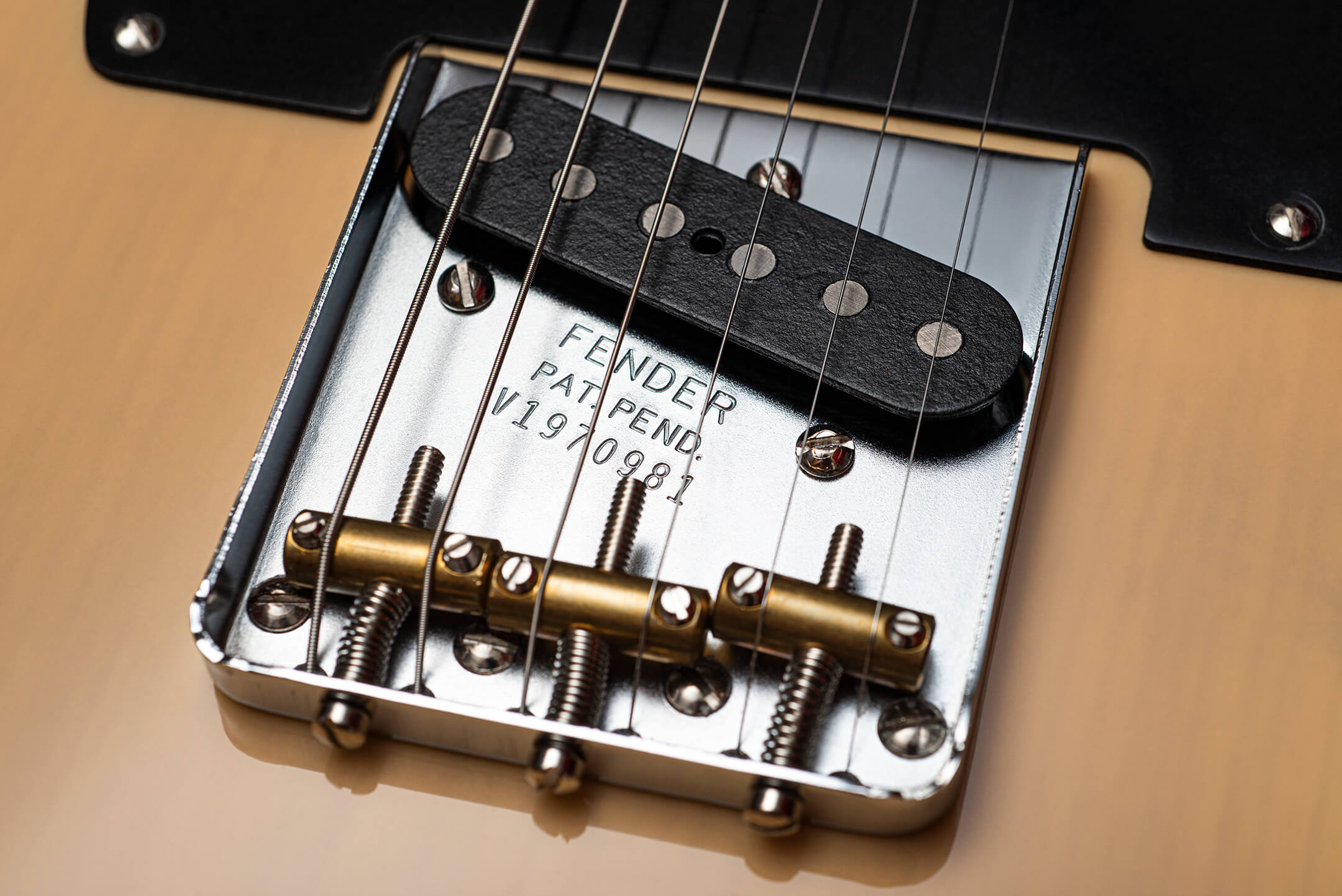 Despite having a single line of script, the vintage-style tuners are welcome, and we’re impressed by the way the back corner of the headstock is rounded over next to the low E tuner. The round string retainer and dramatic curve behind the nut are indicative of attention to detail too, but the period-correct trio of brass saddles down at the bridge end might divide opinions as they are not slanted or milled for the intonation accuracy many of us have come to expect from modern Telecaster hardware. If you think it could be an issue, don’t let this put you off – aftermarket alternatives are cheap and easy to source and install.

Fender is being generous with the tweed case’s accoutrements. In the pocket you’ll find a a vintage-style brown leather strap, ‘ashtray’ bridge cover and a guitar cable that looks like it belongs in the early 1950s. Should you want to switch this guitar from ‘modern’ to ‘vintage blend’ wiring, a manila envelope contains Fender’s supplied ‘wiring kit’, which is actually just a 15k carbon composite resistor. Having tried it with the vintage Broadcaster, we feel the blend circuit is more of historical than practical interest and would opt for modern wiring every time. 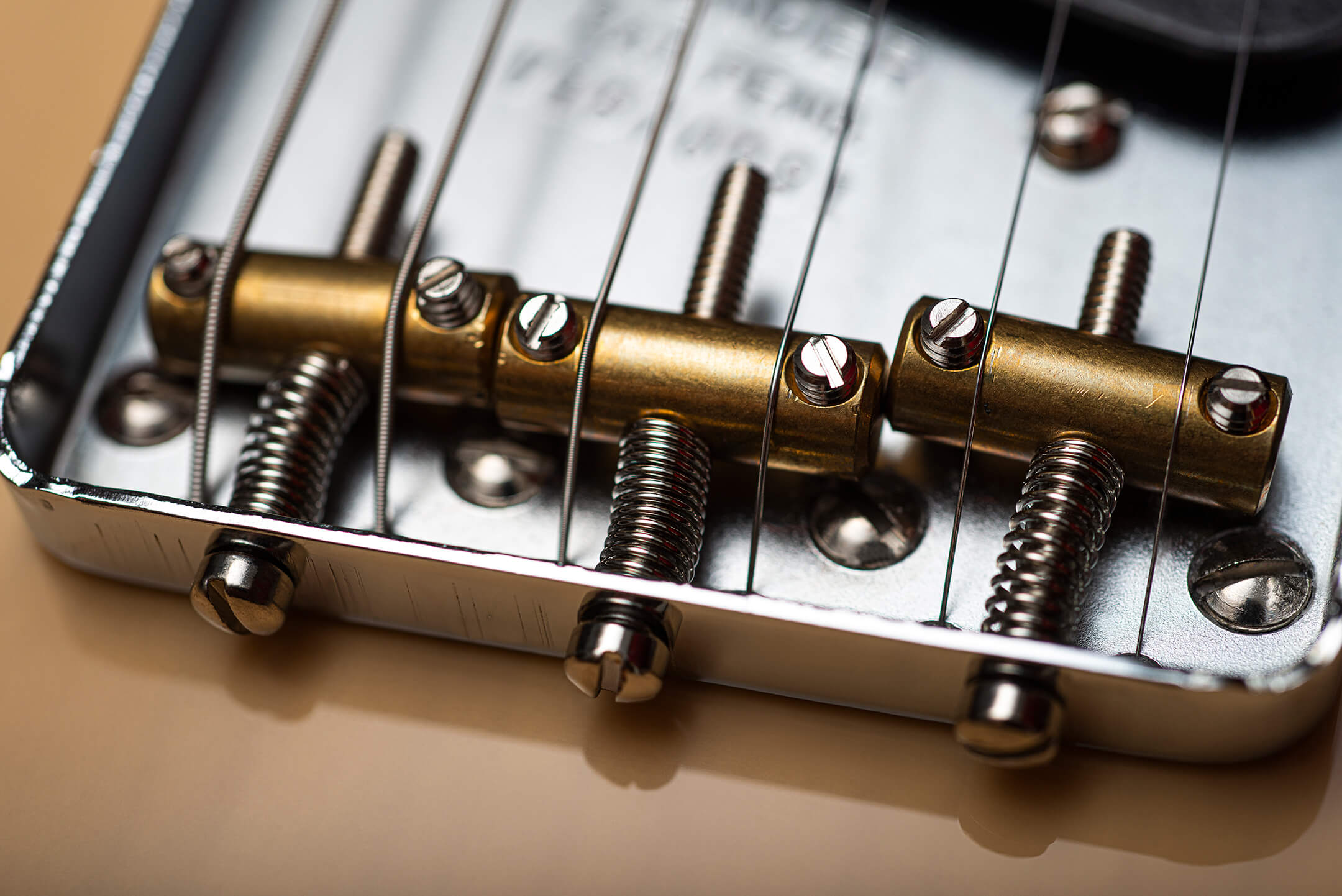 With its relatively light body, full but not unwieldy neck and rolled fingerboard edges, we feel right at home with the 70th Anniversary Broadcaster. Following a quick intonation adjustment and raising the top E string slightly to cure choke out, we’re pleased to discover a lively and resonant Blackguard that tunes up smoothly and is easy to play.

“The neck unit is full and clear, but has the jazzier smoothness in the upper mids that gives this type of pickup its distinctive tone”

This writer’s own Blackguard replica is equipped with a genuine 1954 Fender lap steel pickup in the bridge position, and while the vintage pickup just edges the Custom Shop Designed unit for body and chime, the modern version is very much in the ballpark. Some may even prefer its wiry bite to the lap steel unit’s thicker quackiness. 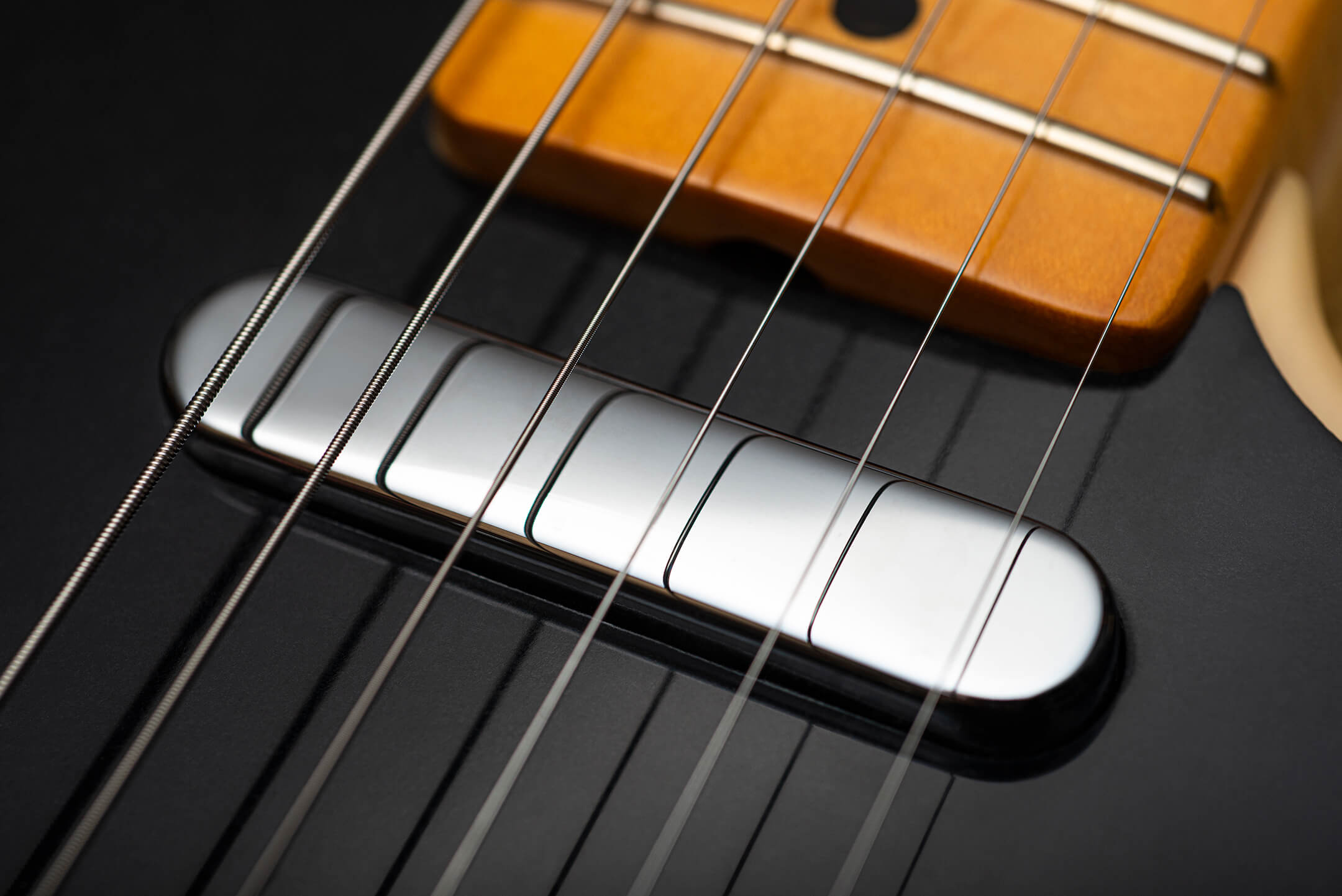 We love a good Tele neck pickup and the 70th Anniversary Broadcaster has one of the good ones – which isn’t the same thing as saying it sounds Strat-like. This example is full and clear, but has the jazzier smoothness in the upper mids that gives this type of pickup its distinctive tone. It also balances very well with the bridge to produce an undeniably classic phasey jangle, and all three positions feel very dynamic and responsive.

The nitro here is rather thick and shiny so doesn’t feel as different to a really good poly finish as you might expect – for more of a vintage feel, check out the Custom Shop’s Limited Edition 70th Anniversary Broadcaster model, which is available with four different levels of ageing from £3,549 – but this is a very likeable and sympathetically updated tribute to a true Fender icon. With production of the anniversary models set to cease at the end of 2020, if you like what you see here, we suggest you act fast. 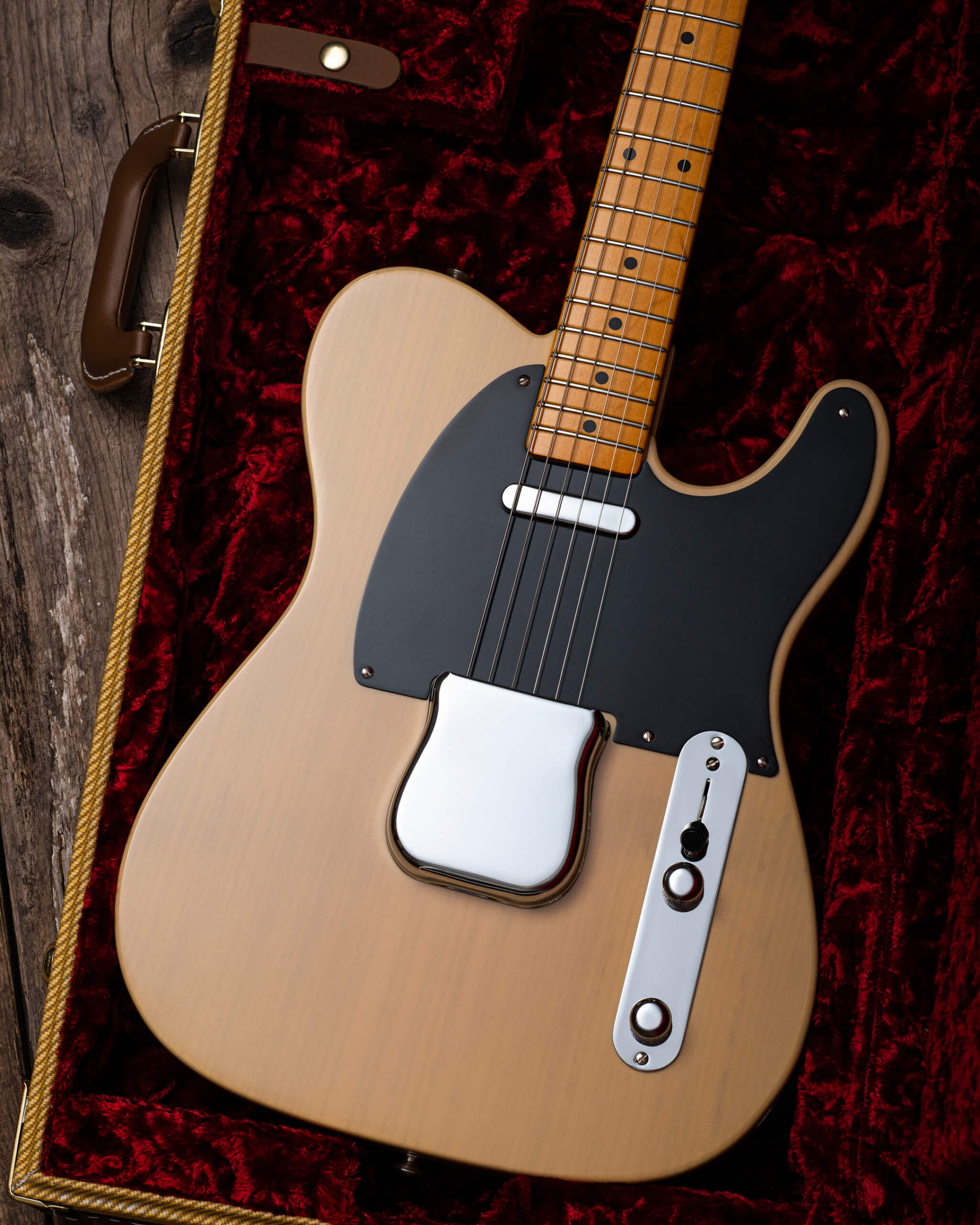