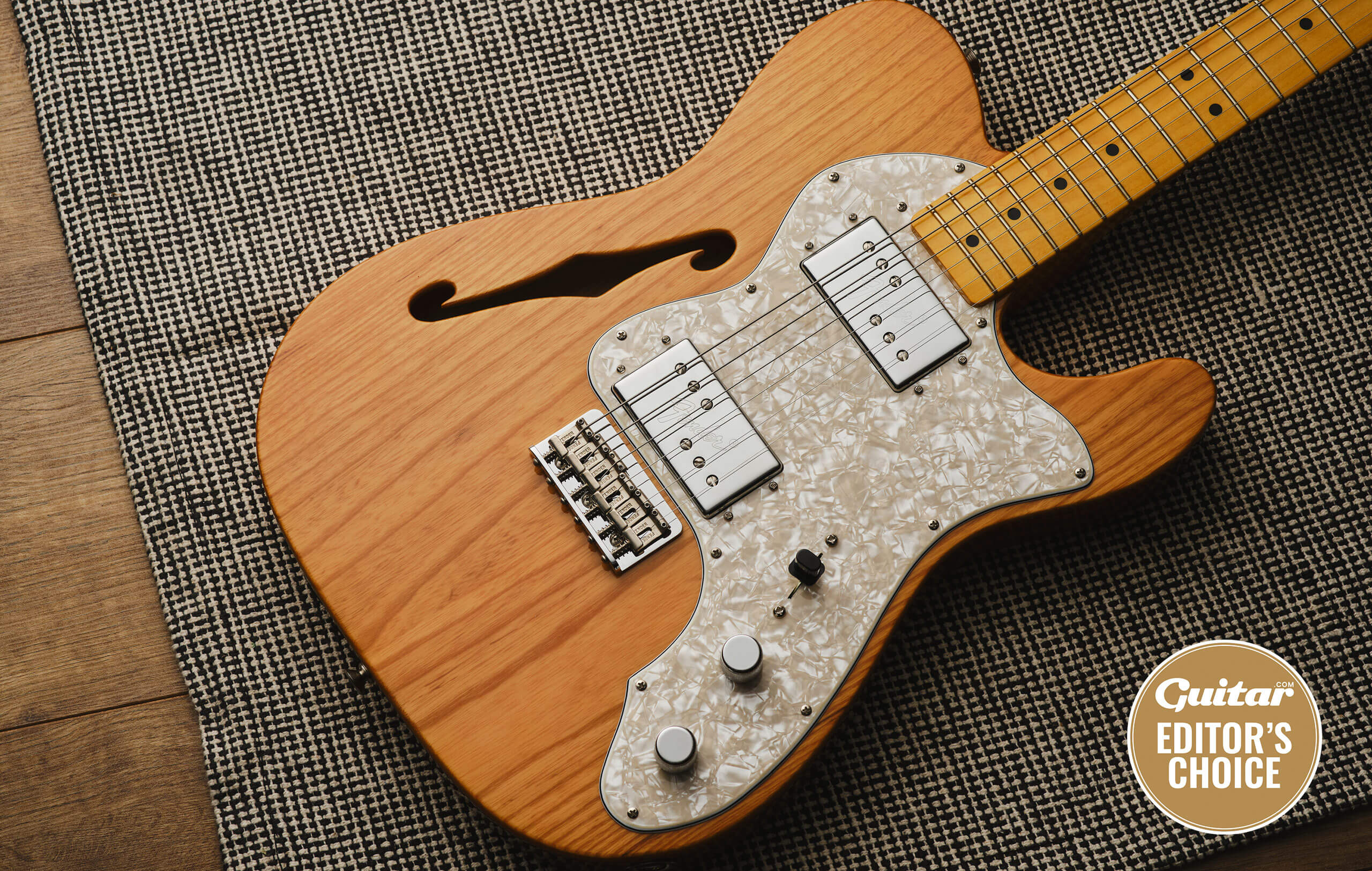 For the first time in over 40 years, Fender is making its classic semi-acoustic with authentic CuNiFe-powered humbuckers. Could this be the highlight of the new AVII series?

Some of the best decisions in guitar history were made for blatantly non-musical reasons. Just look at Leo Fender, trying to turn a fine luxury instrument into a mass-produced commodity and accidentally inventing the Telecaster. And the happy flukes didn’t stop at Fender after Leo left in 1965.

Why was the semi-hollow Thinline Tele developed in the first place? Because the company was running out of lighter weight ash and wanted to be able to use heavier timber without warping people’s backs.

And why did the 1972 model’s humbucking pickups have CuNiFe magnets instead of Alnico? Because it was softer, and therefore easier to machine into threaded polepieces. Sheesh, just imagine what they might have come up with if they’d prioritised making stuff sound good… 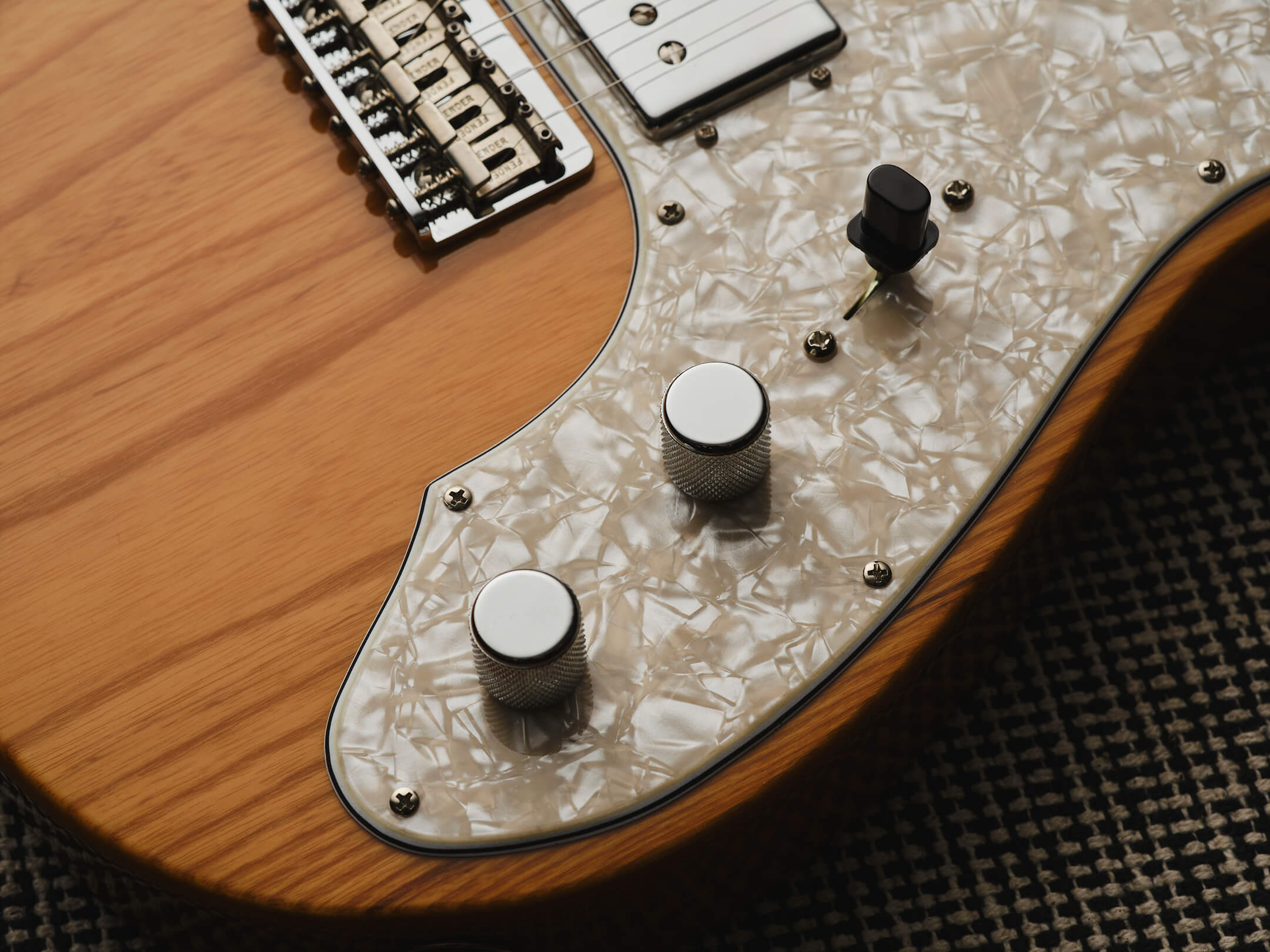 Anyway, by luck or otherwise, the 1972 Thinline Telecaster did sound good – very good. So the fact that Fender has now reissued this model with more faithful specs than ever before, as part of its new American Vintage II series, might just be cause to pop on a party hat and do a little dance.

The main idea of the AVII range is to offer a more historically authentic experience than the Fender American Originals, which replaced the first-gen AV reissues back in 2018. In the case of the ’72 Thinline, this is helped no end by the fact that Fender now has a supplier of CuNiFe, which was commercially unavailable for decades. 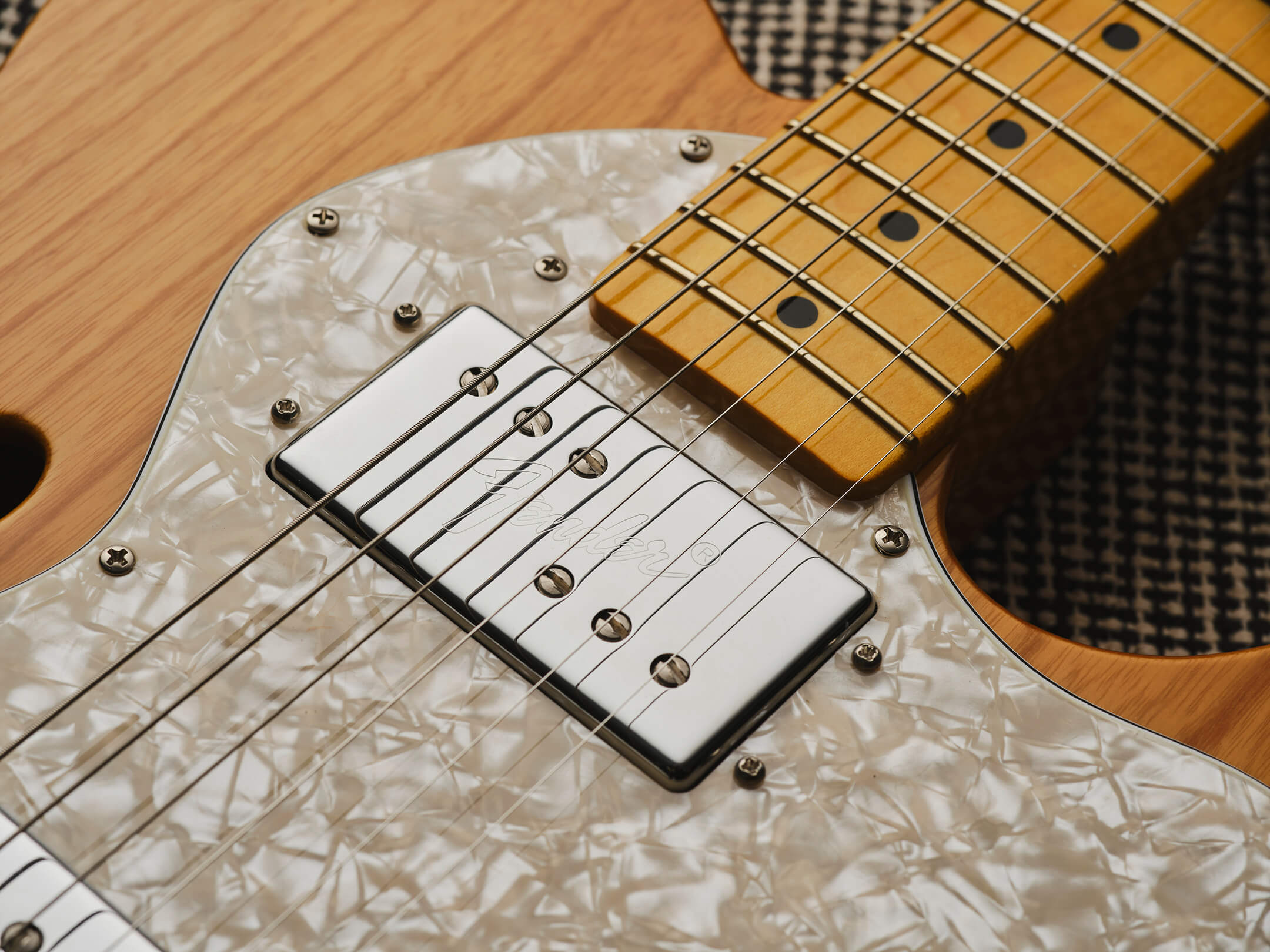 Pickups aside, we have a guitar here that looks spot-on. Our sample’s poly finish is unpainted ash; a sunburst version is also available, and you can also opt for Lake Placid Blue – a custom option in the 70s and super-rare. It looks lush in the official pictures.

Traditional construction dictates that the all-important chambering is carved out from the rear, with the back panel glued on afterwards. The main part of our review instrument’s body is made from two pieces of nicely grained ash, joined in the middle with a near-invisible seam. The back is also two pieces, but this time with a more obvious and off-centre join – well, your adoring fans will probably never see that bit anyway. 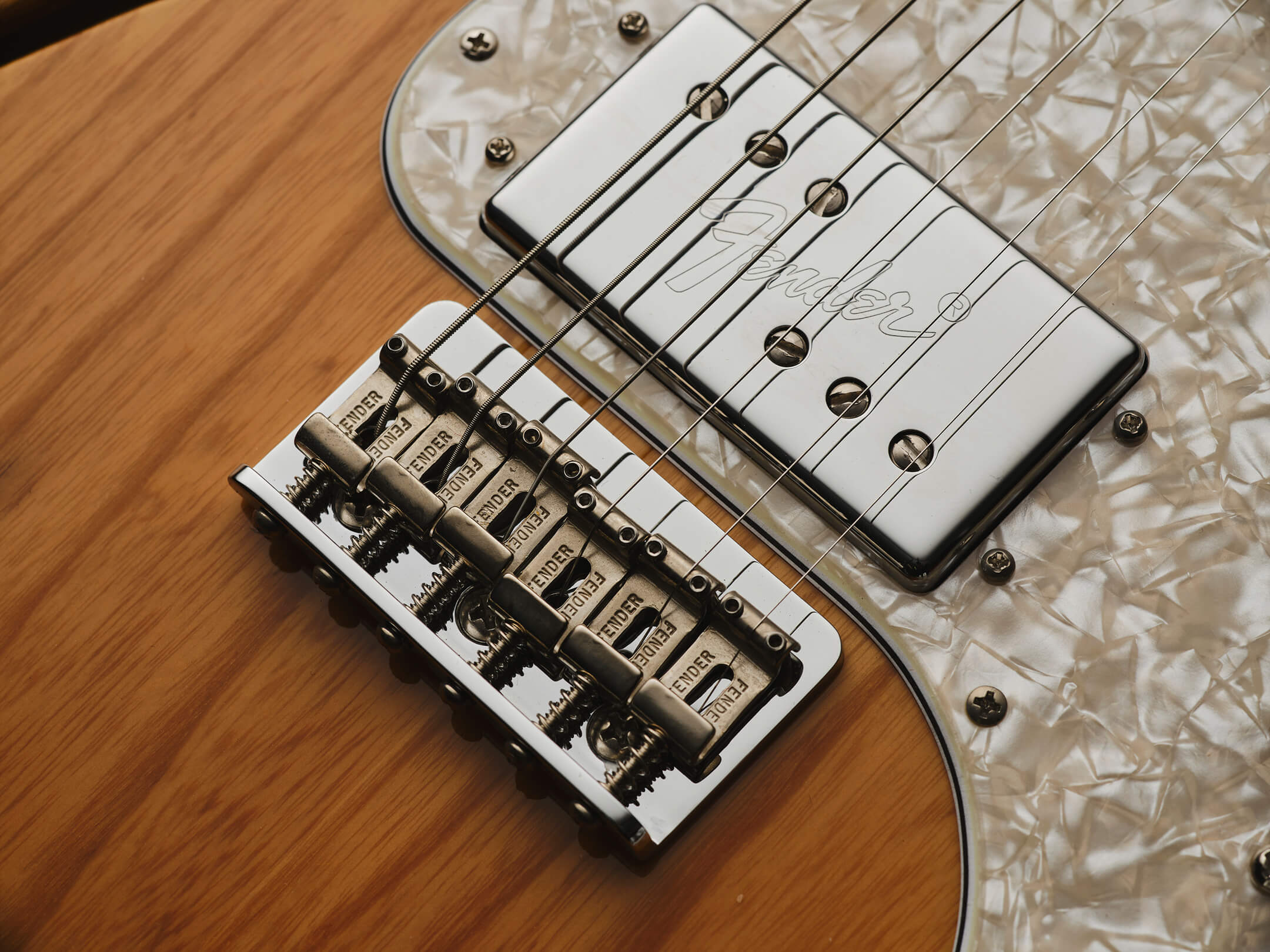 On the front we find the classic pearly guard and small bridge with individual bent-steel saddles; at the other end of the one-piece maple neck, the familiar ‘bullet’ trussrod tip pokes out onto a headstock that’s tinted to (near enough) match the body. Round the back, there’s a three-bolt F-engraved neck plate with Micro-Tilt adjustment.

Arguably more important than all of that is the shape of the neck itself: a medium C with a curvy but correct 7.25-inch fretboard radius. The frets themselves are Fender’s ‘Vintage Tall’ type; that’s a potential debate-stirrer, but you can take it from us that they’re nothing scary – maybe just a touch higher than you’ll find on an original Thinline. 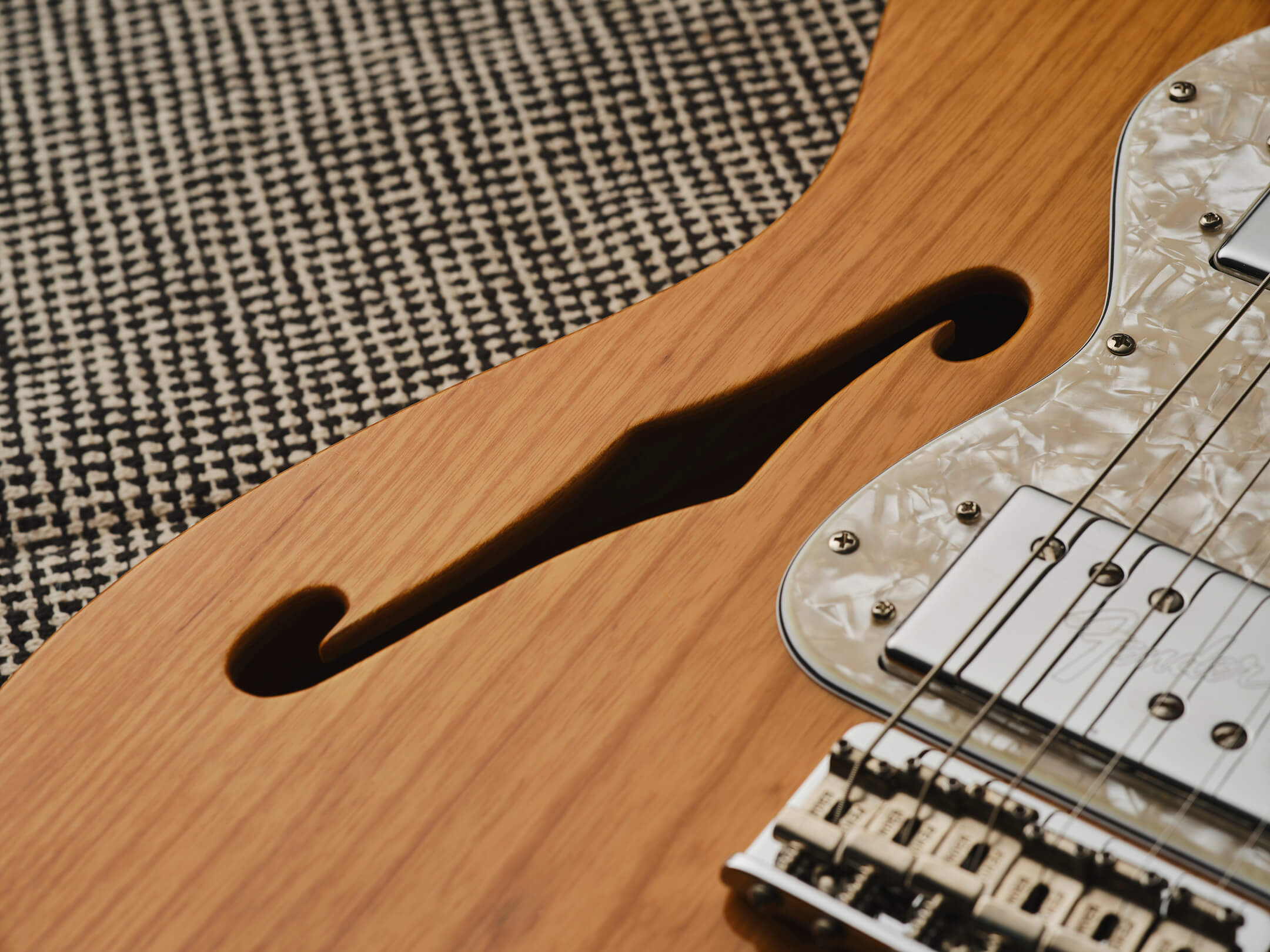 Here’s one final spec to note: the control pots are 1-meg, a period-correct touch that should ensure minimal loss of treble between pickups and amp.

It’s also worth noting that our guitar had taken a slight bump in transit and knocked the neck out of alignment (which you might be able to spot in the pics), but a careful yank in the opposite direction got things back in line with no fuss. 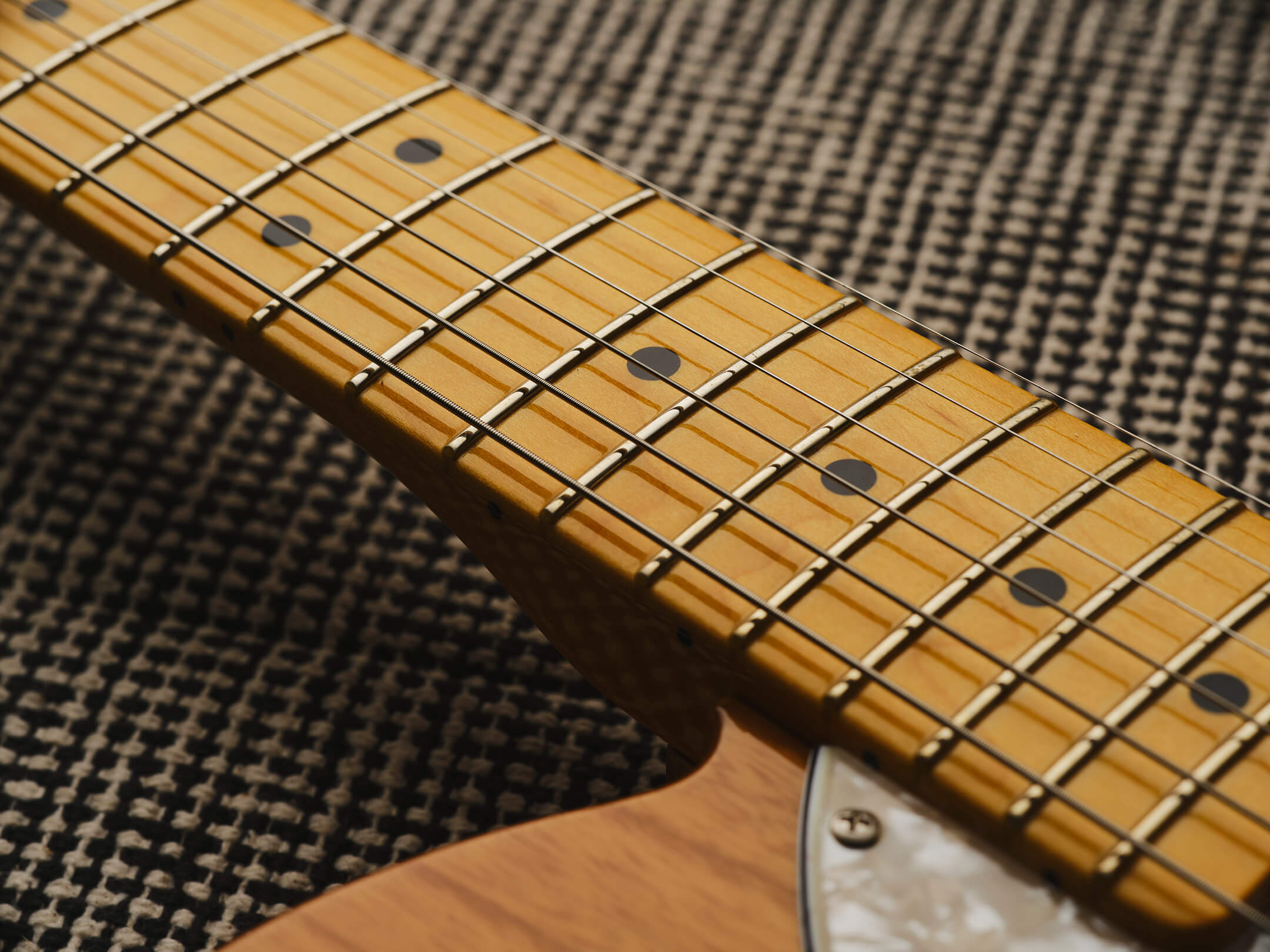 Just how hollow is semi-hollow? If you’re a ’72 Thinline, not very: those chunky pickups need a big old centre block to be fitted into, and with the treble side not even chambered you’re left with a single carved-out area behind the f-hole that would barely serve as a hamster’s drinking trough. The result, in the case of our guitar, is that it weighs over eight pounds. That’s still lighter than the average Les Paul, but it’s no tennis racket.

Still, there’s enough air in here to make for a much fuller acoustic tone than our reference solidbody Tele – and that bodes well for the plugged-in fun, which begins with the powering up of a small black-panel combo. 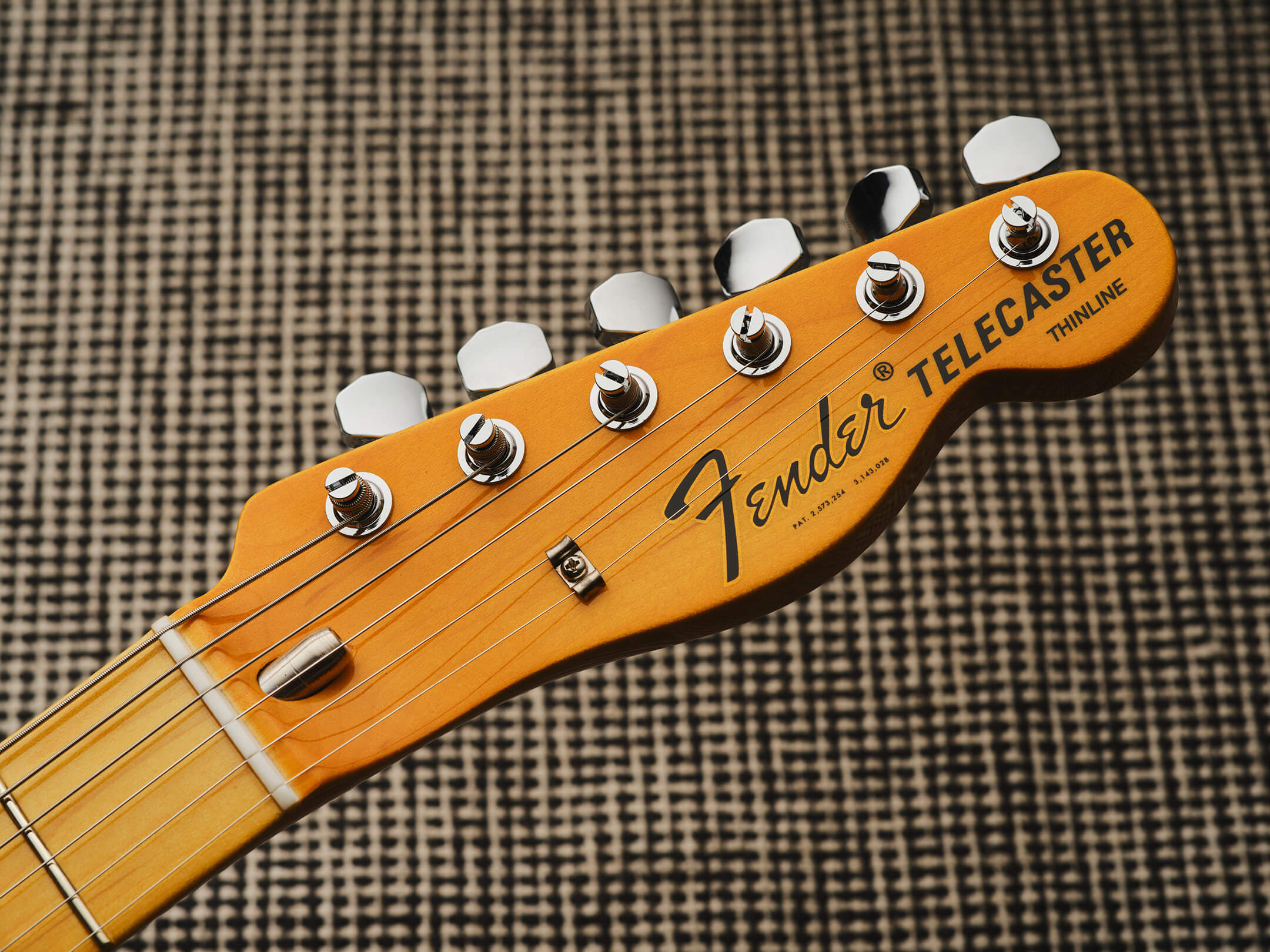 The first thing that strikes us is the stark contrast with the sound of our standard Telecaster. Alright, that’s hardly a surprise given we’re dealing with humbuckers instead of single-coils, but it’s immediately clear that these pickups truly are Wide Range. It’s possible Seth Lover was thinking of magnetic fields rather than frequencies when he came up with that name, but either way, these pups retain all the top-end sparkle of a traditional Fender type while adding in a whole load of beefy PAF-style midrange. It’s a bit like playing a Tele and an ES-335 at the same time. 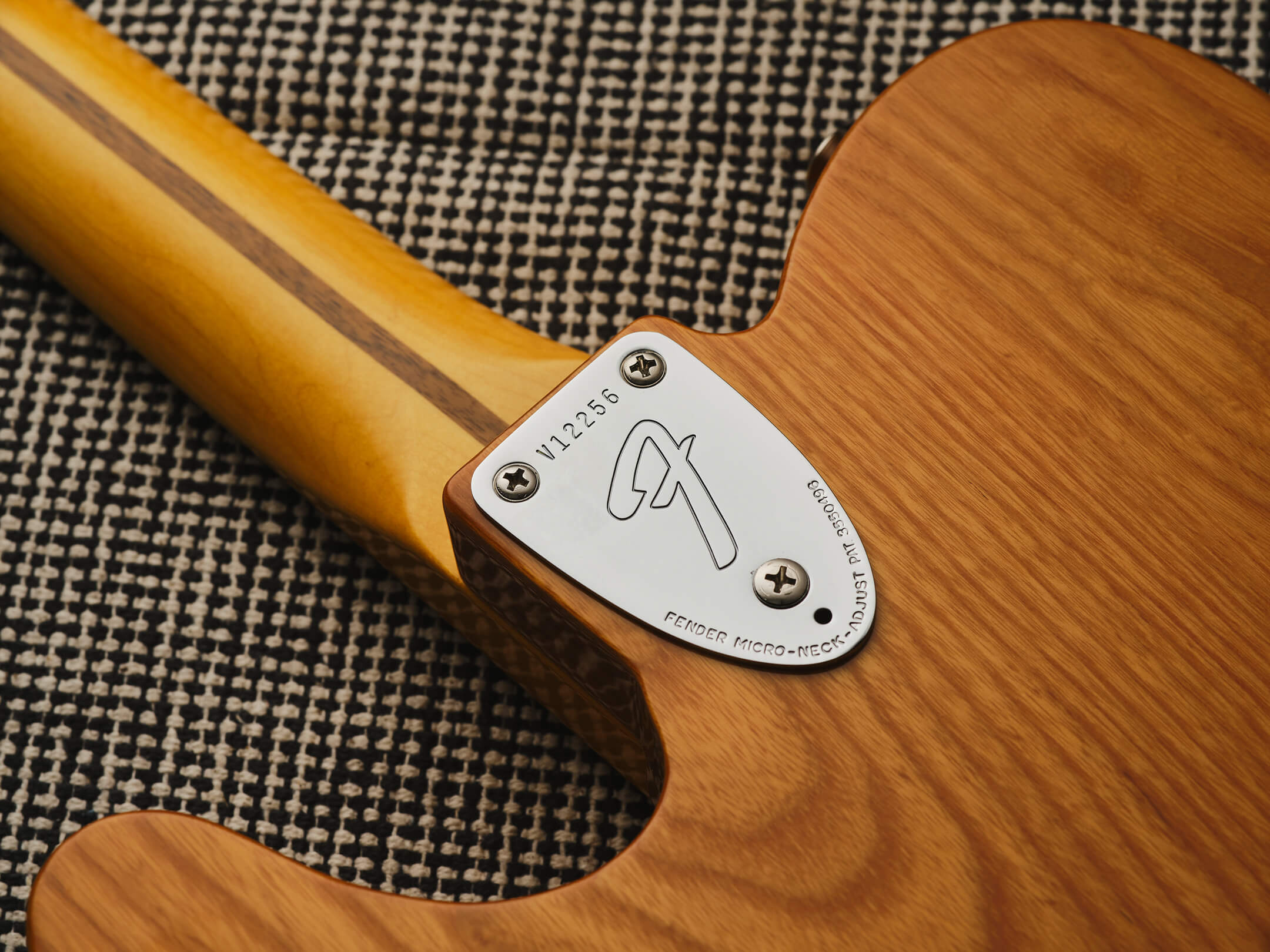 How much of that is down to the CuNiFe? Perhaps less than you might think, given how well some specialist pickup makers have worked around its scarcity to achieve tonally similar results with other alloys, but there’s no doubting the unique quality of Lover’s design. While it can’t offer the delicate shimmer of a solidbody with single-coils, this guitar has an equally likeable voice of its own: thick and throaty in the mids, with a gently thumpy attack on the wound strings and plenty of bite up top. 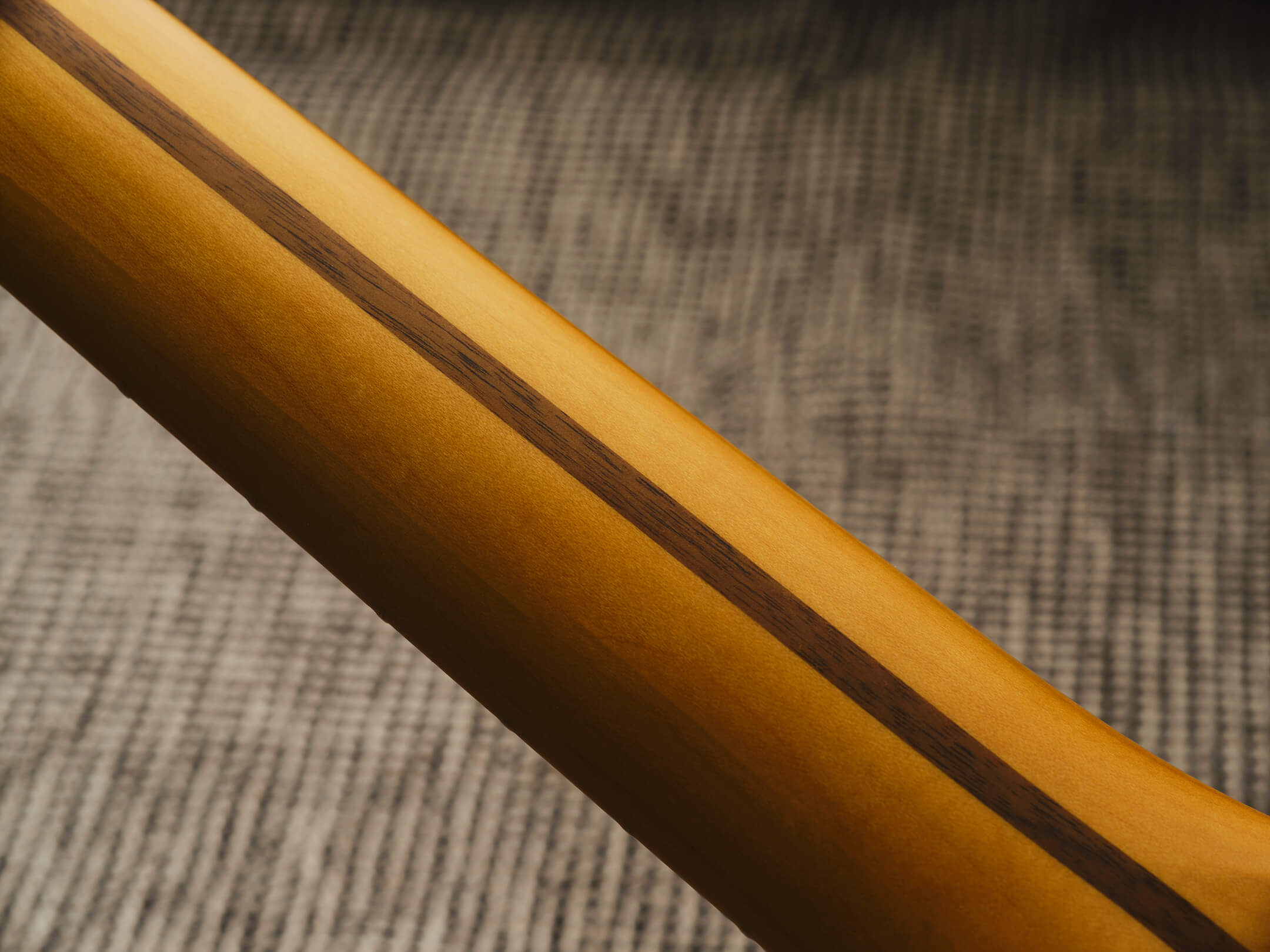 In the middle position it could almost pass for a Rickenbacker 360, while you might even get away with a bit of jazz on the neck pickup if no one’s looking. But the bridge pickup is the place to go for bold and chunky riffage, aided by a solid factory setup on a neck that starts out skinny in the cowboy zone but fattens up nicely towards the 12th fret.

A perfect replica, then? Well, we’ve spent many happy hours with an original ’72 Thinline and it did sound distinctly mellower than this. But that could actually be down to the old magnets losing charge over the years – and while this new guitar might be a tad too spiky-edged for some tastes, you can get close to that softer response simply by pulling back the tone control a notch or two. 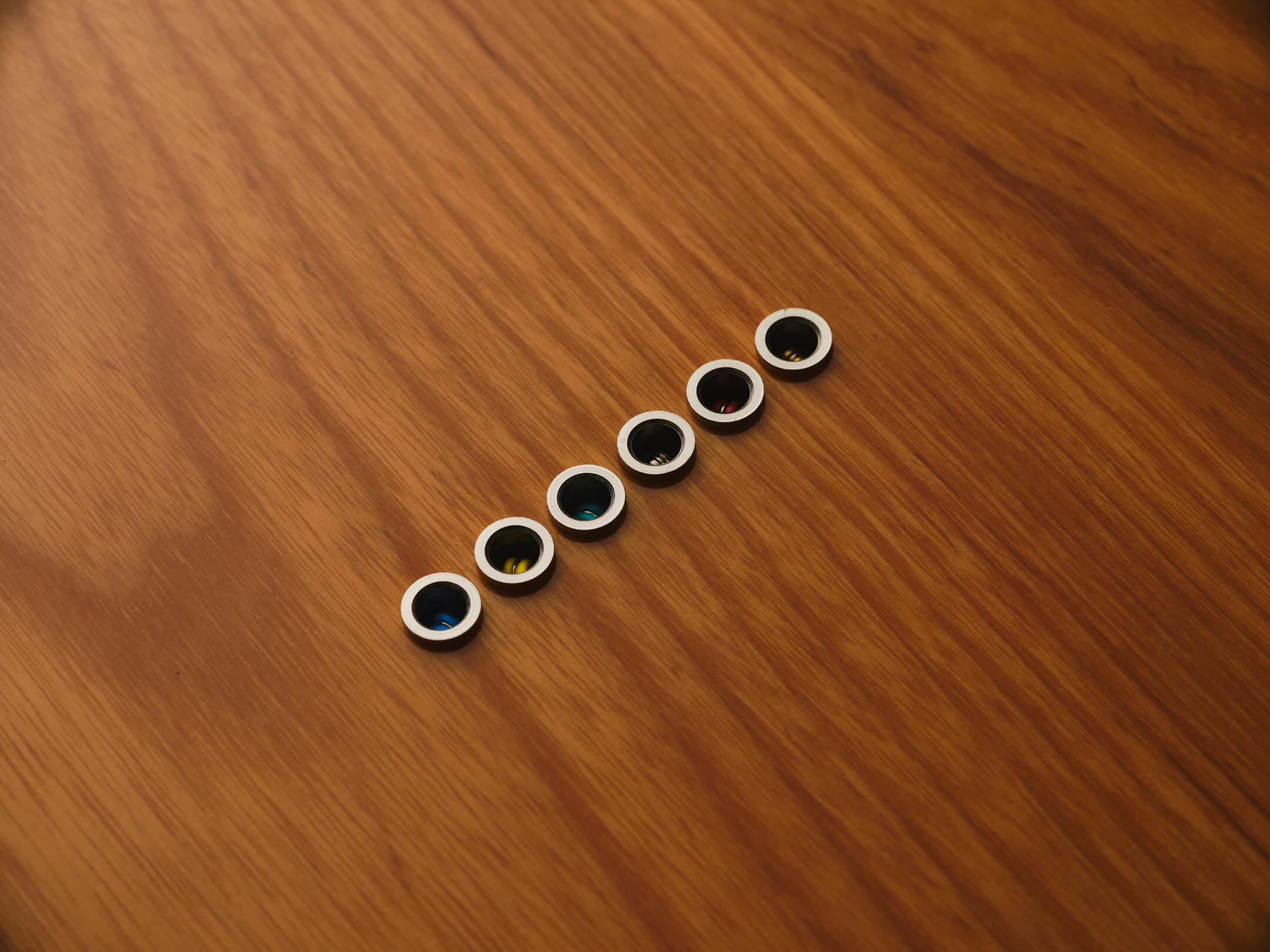 What really matters is that the essential character of this reissue is impressively true to the vintage template – which just goes to show what Fender’s designers can achieve when they do prioritise making stuff sound good.