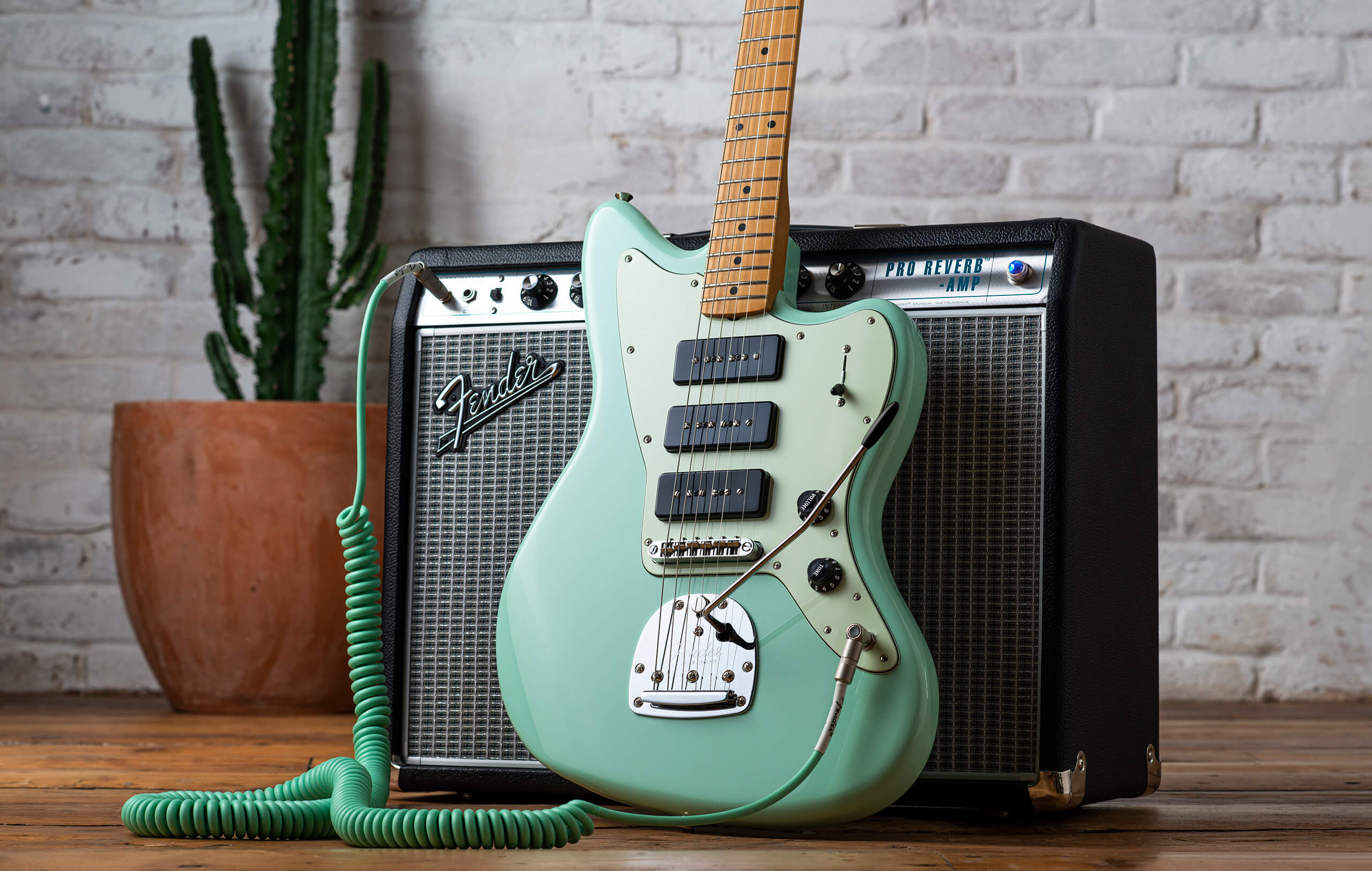 Heading up Fender’s quirky new Noventa range, this three-pickup offset is all about blurring boundaries. But does it have the tones to back up its rebel attitude?

Noventa might sound like the name of a forgotten Vauxhall people-carrier, but there’s nothing middle-of-the-road about this latest Fender range – and if you want proof of that, just count the pickups.

The Noventa Telecaster only has one, so it’s really more of an Esquire, while the Stratocaster and Jazzmaster have two and three respectively, suggesting some sort of curious role-reversal… except that the pickups themselves look a lot like P-90s, which aren’t very Fender at all. Clearly these are not guitars for traditionalists.

This instrument, the flagship of the Mexican-made series, is pretty much a Jazzmaster in name only: it has the offset body shape and the familiar floating tailpiece, but the bridge is a fixed tune-o-matic type and the only switch is a five-way blade for accessing those Strat-like in-between sounds.

We’re curious to find out just how Strat-like that will be. Fender isn’t saying much about the construction of these Noventa pickups, which are common to all three models, but it’s surely no coincidence that they look a great deal like Gibson’s single-coil soapbar design. A recipe for chunkier tones?

Anyway, the black covers make for a striking contrast with the mint pickguard of our Surf Green sample. This model is also available in Fiesta Red as well as a natural Walnut finish, complete with a black ’guard and pau ferro fretboard that will make time-travellers from 1974 feel right at home.

The first thing we notice when picking up this guitar is that we’d quite like to put it down again – just under 4kg is maybe only a little above average for one of Fender’s big-bodied offsets, but it’s heavy if you’re used to Strats or Teles. At least the C-shaped neck is comfortable, staying resolutely ‘medium’ all the way up to the body join (which, incidentally, looks a little gappy on the bass side of our guitar).

Then we plug in… to be greeted by a constant buzz that only stops when we touch the end of the lead, not the bridge or strings. That clearly indicates a grounding issue, which is unlikely to take much fixing but is hardly a reassuring start.

Ploughing on, we make our way through the five pickup settings without encountering any surprises – but that’s not a complaint. Fender has aimed for a genre-hopping crossover zone and hit the mark with a useful blend of classic tonal ingredients.

If you like Stratocasters, you’ll find plenty of that famous clucky clarity here. And if you like P-90s, you’ll savour the throaty thickness that these pickups add to the formula. Clean, crunchy or properly scuzzed up, it’s a decent ‘best of both worlds’ solution that still allows for something close to the full suite of pure Strat tones simply by dialling the volume back to seven or eight.

And if you like Jazzmasters? Well, there’s not a great deal of that famous midrange sweetness to be found in this guitar, and you don’t have the option of combining bridge and neck pickups for ultimate chime in the middle position. Dare we say it, you’re probably better off with the Strat model. However, if you appreciate offset stylings but have never got on with the tones or complex switching typical of vintage-style models, the Noventa Jazzmaster is well worthy of investigation.