Gibson’s wall of custom-colour Firebirds was one of most arresting sights at NAMM 2020. We put a pair of these rare birds to the test.

The Gibson Firebird is one of several examples of an electric guitar design that was somewhat ahead of its time and only became truly iconic years after it had stopped rolling off the production line. It’s in good company, of course – the sunburst Les Paul Standard, Explorer and Flying V being three other McCarty-era creations that weren’t exactly runaway successes on launch – but whereas Fender’s misunderstood and long-unfashionable Jazzmaster eventually became a mainstream proposition, in the wild, the Firebird is still a rarer creature to behold.

That’s not to say it hasn’t made its mark over the years. Firebirds helped write musical history in the hands of Johnny Winter, Gatemouth Brown, Allen Collins and, briefly, Eric Clapton. And who can forget Phil Manzanera’s Cardinal Red 1964 Firebird VII? Our own Firebird fascination came courtesy of seeing Noel Gallagher pictured in front of an Orange stack with a Non-Reverse model during the (What’s The Story) Morning Glory? sessions, not to mention grainy photographs of Keith Richards and Brian Jones with a magnificent Firebird VII. Paul McCartney is even thought to have recorded the Maybe I’m Amazed guitar solo using the left-handed Non-Reverse Firebird he played extensively during his early solo career. 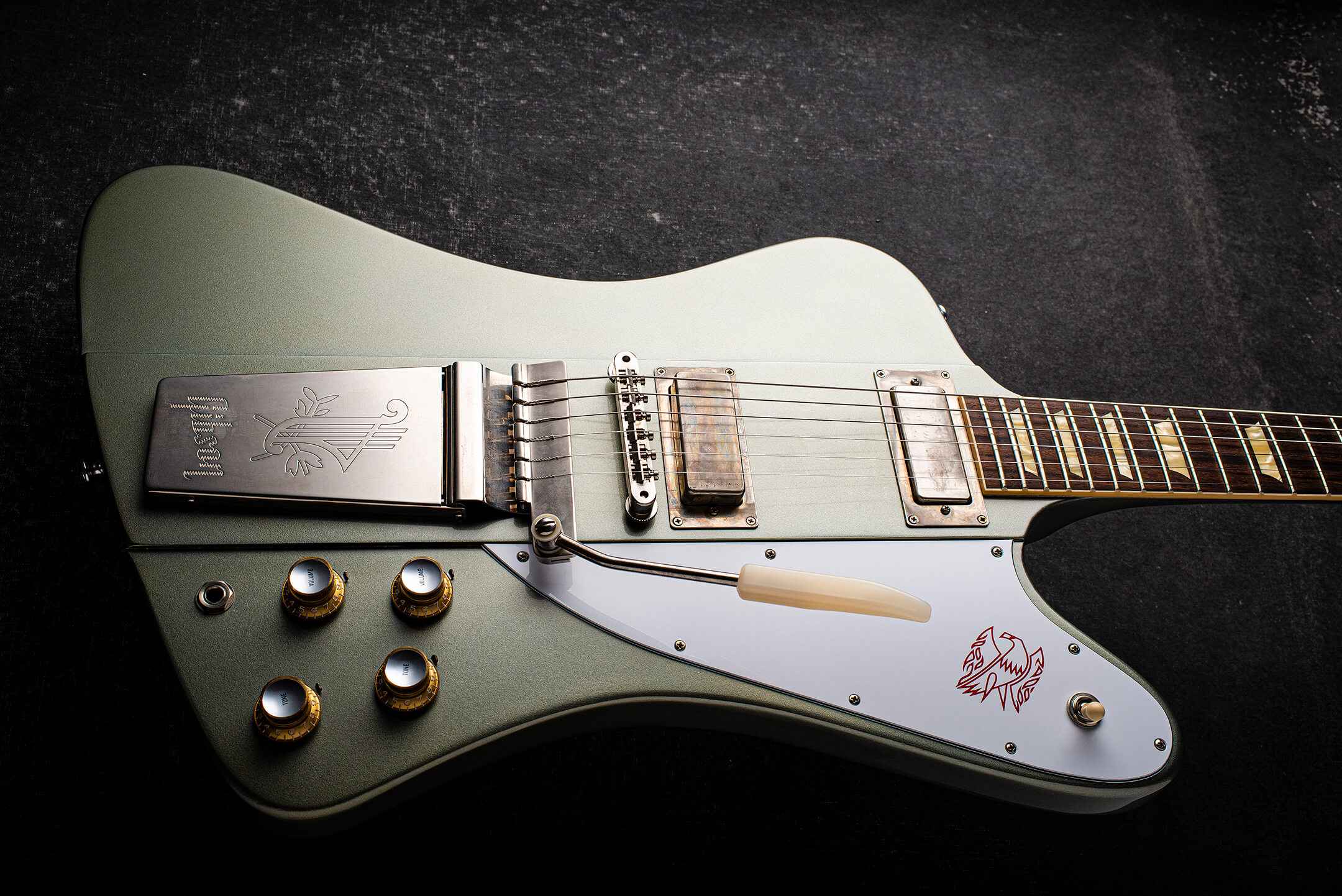 Today, between Gibson, Gibson Custom and Epiphone, there are six different ’birds to choose from, with the most accessible being Epiphone’s Inspired By Gibson Firebird at £549. Behind the scenes, the company has also been embroiled in litigation with Warwick over the rights to the Firebird trademark in the EU, while back in January, Gibson’s Winter NAMM booth included a jaw-dropping wall of ultra-limited reverse and Non-Reverse Custom Shop Firebirds in an array of 1960s custom colours.

“Like Fender’s, Gibson’s custom colours originated in the automotive industry”

Unsurprisingly, they proved to be some of the most photographed and talked about guitars at the show, and courtesy of our friends at Coda Music in Stevenage, we’ve got our hands on a pair of them. Silver Mist Poly and Heather Poly are two of the rarest of all Gibson finishes and your chances of seeing a vintage Firebird in either of these colours, let alone tracking one down and buying one, are extremely slim. Cosmetics aside, because our review models are equipped with the same pickups and Maestro vibrato units, it also provides a fascinating opportunity to compare the original reverse-body model with the simpler design that superseded it.

Like Fender’s, Gibson’s custom colours originated in the automotive industry. Though the finishes here are listed as nitrocellulose lacquer VOS, both Heather Poly and Silver Mist Poly were originally Lucite with nitrocellulose clear coats (‘poly’ meaning metallic in 1960s Gibson-speak, rather than being an abbreviation for polyester or polyurethane). Heather Poly first appeared on Cadillacs in 1962, while in 1959, Silver Mist Poly could be found in several General Motors divisions under a variety of names, such as Grecian Gray (Chevrolet), Silver Birch (Buick), Silver Metallic (Cadillac) and Silver Mist Gray (Pontiac).

“Heather Poly first appeared on Cadillacs in 1962, while in 1959, Silver Mist Poly could be found in several General Motors divisions under a variety of names”

Construction largely follows the classic blueprints. The Indian rosewood fingerboards and the Non-Reverse model’s neck are attached with hide glue – good news for vintage obsessives, less so for those of us who avoid buying or consuming animal products – while the ’63 Firebird V commands a considerably higher price on account of its trickier build, with a nine-ply walnut/mahogany through-neck, and a pair of mahogany wings creating the body’s asymmetrical outline.

Though both instruments have ribcage contours, the Non-Reverse model’s is more extensive and this, along with generous edge radiusing, makes for a more approachable and Fender-like feel. In 2019, when we photographed Brian Ray’s 1964 Cardinal Red Firebird V, we noticed that the red finish on the neck extended over the binding, almost to the edge of the fretboard, with white side dots presumably created by precise masking prior to spraying. Here, on our reverse-body review guitar, standard tortoiseshell dots have been installed in the exposed cream binding, while the full depth of the unbound rosewood fingerboard is visible on the Non-Reverse model.

“Strapped on, the unconventional and slightly left-shifted playing position of the reverse Firebird takes a little getting used to”

Strapped on, the unconventional and slightly left-shifted playing position of the reverse Firebird takes a little getting used to and, though their performance is impressively smooth and accurate, those big banjo tuners contribute to neck dive. Switching over to the Non-Reverse model, both the instrument’s balance and fretting hand position feel rather more familiar. That said, our favoured option is to relocate the strap button to the heel, which makes a Firebird hang from your body more like an SG or ES-335.

On close inspection, neither finish has been executed flawlessly, but both guitars certainly look like a million dollars under lights with their combination of unusual metallic hues and chemically aged nickel parts. There’s something undeniably appealing about the idea of owning a NAMM Show guitar that’s been filmed and photographed by the world’s guitar press.

On balance we usually prefer the slightly more stripped down and organic feel of an unbound board, so it’s the Non-Reverse Firebird that’s initially the more inviting of the pair. Our ’birds are listed as having authentic ’63 medium C and ’65 slim C profiles respectively, but both have a similar taper and there’s not a great deal of difference in depth. The Non-Reverse model has more pronounced shoulders and a flatter back and the ’63 a more elliptic carve but really it  comes down to personal preference. 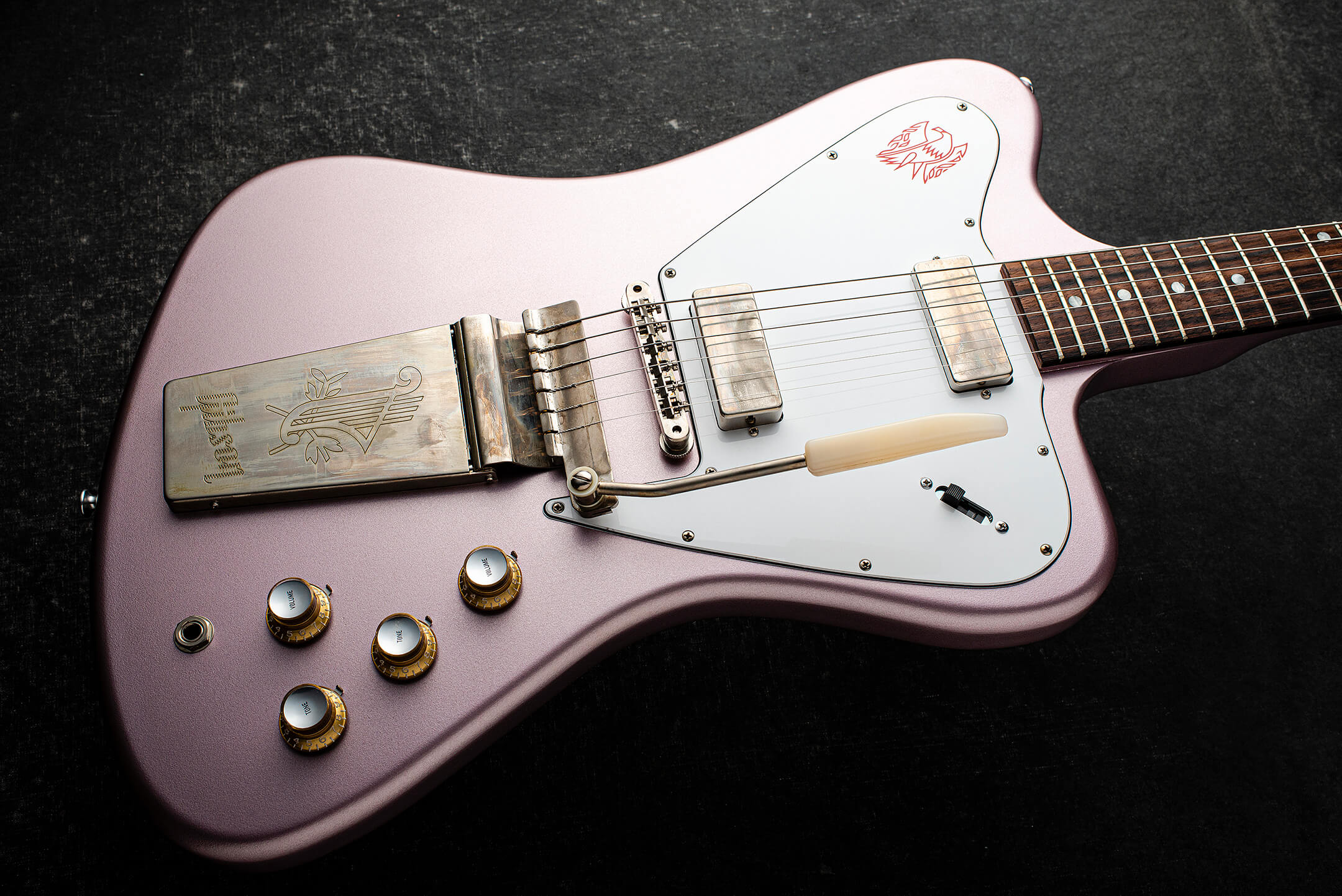 The Maestro Vibrola may not be the most sophisticated vibrato tailpiece ever designed but it certainly doesn’t appear to be hindering acoustic sustain, as both guitars have it in abundance, though the Non-Reverse is the louder and fuller-sounding of the pair. It also returns to pitch surprisingly reliably and allows you to augment single notes and chords with beautiful Bisgby-style dips and shimmers.

Our amplified explorations begin with the ’63, where we find the Silver Mist guitar replete with the sounds of dangerous rock ’n’ roll, ranging from Satisfaction-era Stones to PJ Harvey circa Stories From The City, Stories From The Sea and beyond. It’s a shame that the reverse-body Firebird is so often pigeonholed primarily as a slide guitar.

“The Maestro Vibrola may not be the most sophisticated vibrato tailpiece ever designed but it certainly doesn’t appear to be hindering acoustic sustain, as both guitars have it in abundance”

Although it excels in that area thanks to its easy upper-fret access and the way that these pickups slice through a mix, there’s so much more on offer here. The middle setting alone is capable of both springy Meters-esque funk and some of the sleaziest indie-rock tones around, and any concerns you might have about the reverse body’s physical unwieldiness quickly evaporate when you begin to get lost in its sonic possibilities.

Over to the Non-Reverse, then, and given that the ’63 has so much character, it’s a tough act to follow. Though plenty of a Firebird’s personality traits come from its pickups, it is perhaps predictable that the more traditionally constructed model isn’t quite as sonically dazzling as its revolutionary sibling, initially at least.

“There’s a little more SG-like aggression in the Non-Reverse design’s DNA, so we find ourselves gravitating towards grittier rock tones”

There’s a little more SG-like aggression in the Non-Reverse design’s DNA, so we find ourselves gravitating towards grittier rock tones that range from the Faces to the Foo Fighters – it’s certainly punchier and more focused in a way that suits powerchord riffs and palm-muted punk rhythm parts. And although we were initially concerned about pickup switching on the fly, using that slider switch quickly feels pretty natural, even if it does generate an audible ‘thunk’.

This is a perfect example of how you can take two identical sets of pickups and almost identical components, drop them into two guitars with different physical attributes and experience very different amplified results. Which guitar would we take home? It’s a tough one, because we love the look and feel of the Non-Reverse model, and in many ways it’s a more practical instrument, but the heady tonal palette of the reverse-body Firebird is just more alluring.

Expensive? Yes. As pricey as a custom-colour vintage original? Not even close. As literal showpiece models, both of these guitars may well find their way into the vaults of collectors, but we hope they get played regularly too – they certainly deserve to.