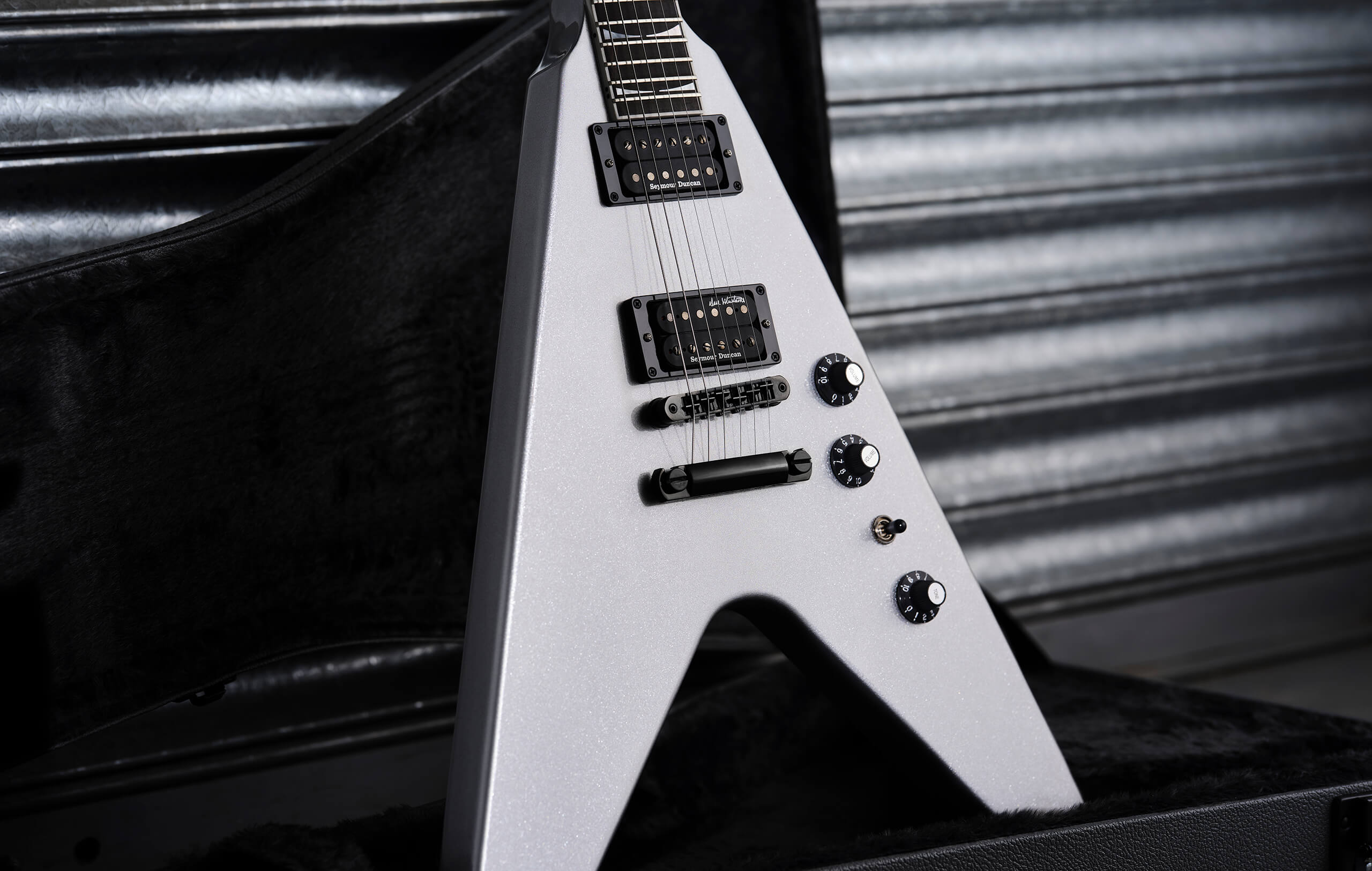 The first result of the eagerly anticipated merging of titans Gibson and Dave Mustaine is finally available to the masses… is it a V for victory?

Vintage V lovers should stay clear, but for Mustaine and thrash fans it’s a no-brainer – though the high price may force some to wait for a potential Epiphone model.

Rumours of Dave Mustaine leaving the Dean fold began circulating in 2019, prompted by the sale of many of his personal Dean guitars… but no one guessed where his next destination would be. There were many fans who believed he would be returning to the Jackson fold, but then the Megadeth legend surprised everybody by sharing a big-budget promotional video… from Gibson.

“Nobody really knows how much I grew up secretly coveting Gibson products,” he explained. “But I think anybody with a right mind would be able to tell, because I play Vs and Explorer-shaped guitars. I was playing in Panic, the band I was in before Metallica, and I wanted so badly to have a legitimate Gibson guitar but it was out of my price range.”

Mustaine has been indelibly associated with the Flying V shape for decades, perhaps none more so than the jet-black ‘King V’ Jackson he used during Megadeth’s most commercially and artistically successful period in the 90s. So it’s little wonder that his first collaboration with Gibson is a signature Flying V. This is the company that did, after all, invent the design. 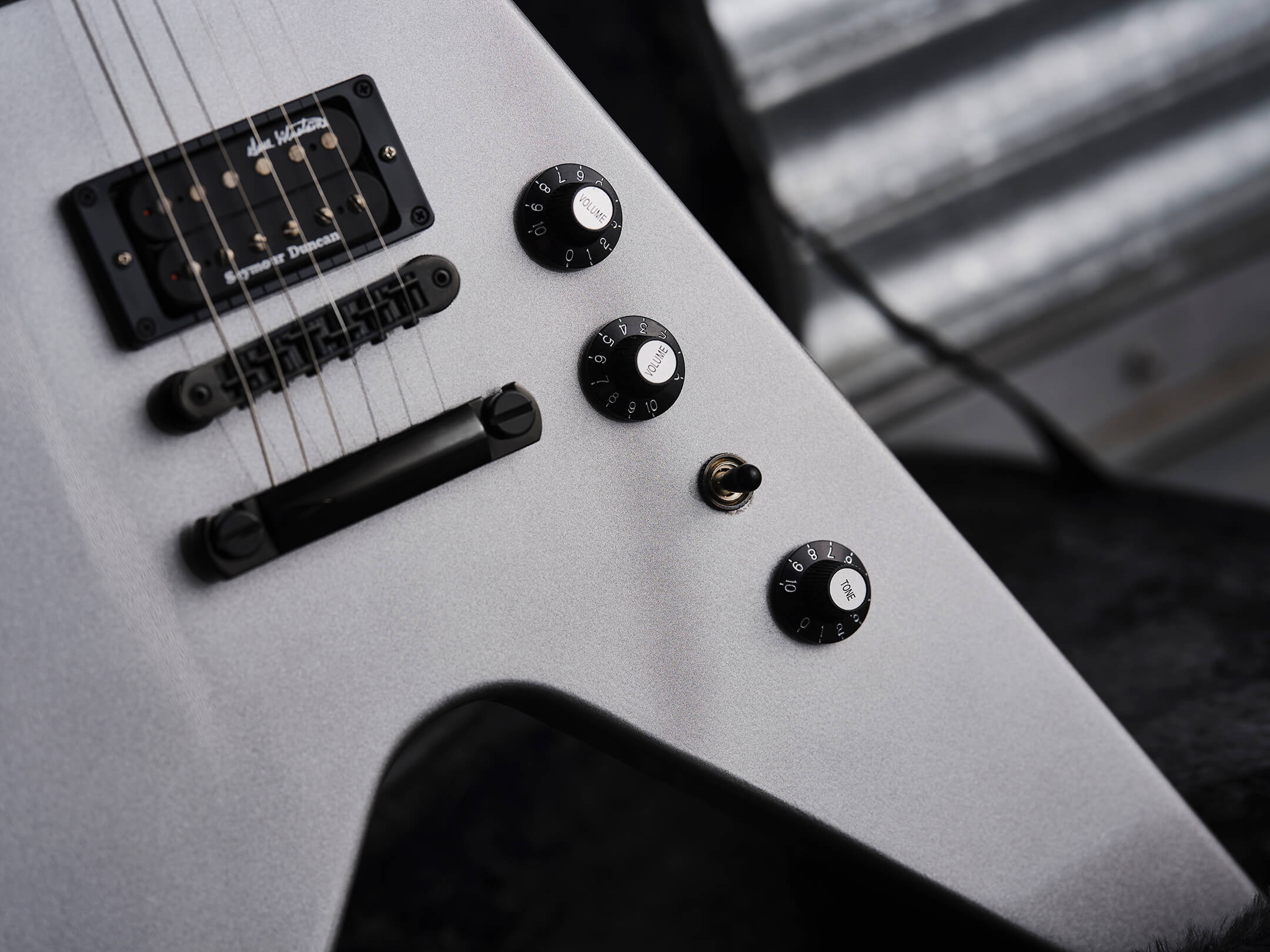 But while Dave didn’t rejoin Jackson’s roster, he has brought part of Jackson with him: the very un-Gibson 25.5” scale length of his trusty King V has been deployed for this new signature model. That isn’t the only change made, as in almost every respect his new guitar is a different instrument to the classic korina Flying V of the 1950s and indeed today’s USA line – right down to the strap button placement. Some changes may prove more controversial than others, but controversy has been a familiar companion for Dave Mustaine throughout his entire career.

With rounded wings, a mahogany body and a glued-in neck, the core of the V remains intact, but the similarities with the main American range end there. The rosewood ’board has been displaced in favour of ebony, which Dave has used since his Jackson days, and it features 24 medium jumbo frets as opposed to the standard 22. Those frets are embedded with mother-of-pearl ‘teeth’ inlays that, together with the Explorer-style headstock, project an altogether more metal vibe – which was, of course, the intention. Colour options have been limited to just two finishes, Antique Natural and our review model’s Metallic Silver. 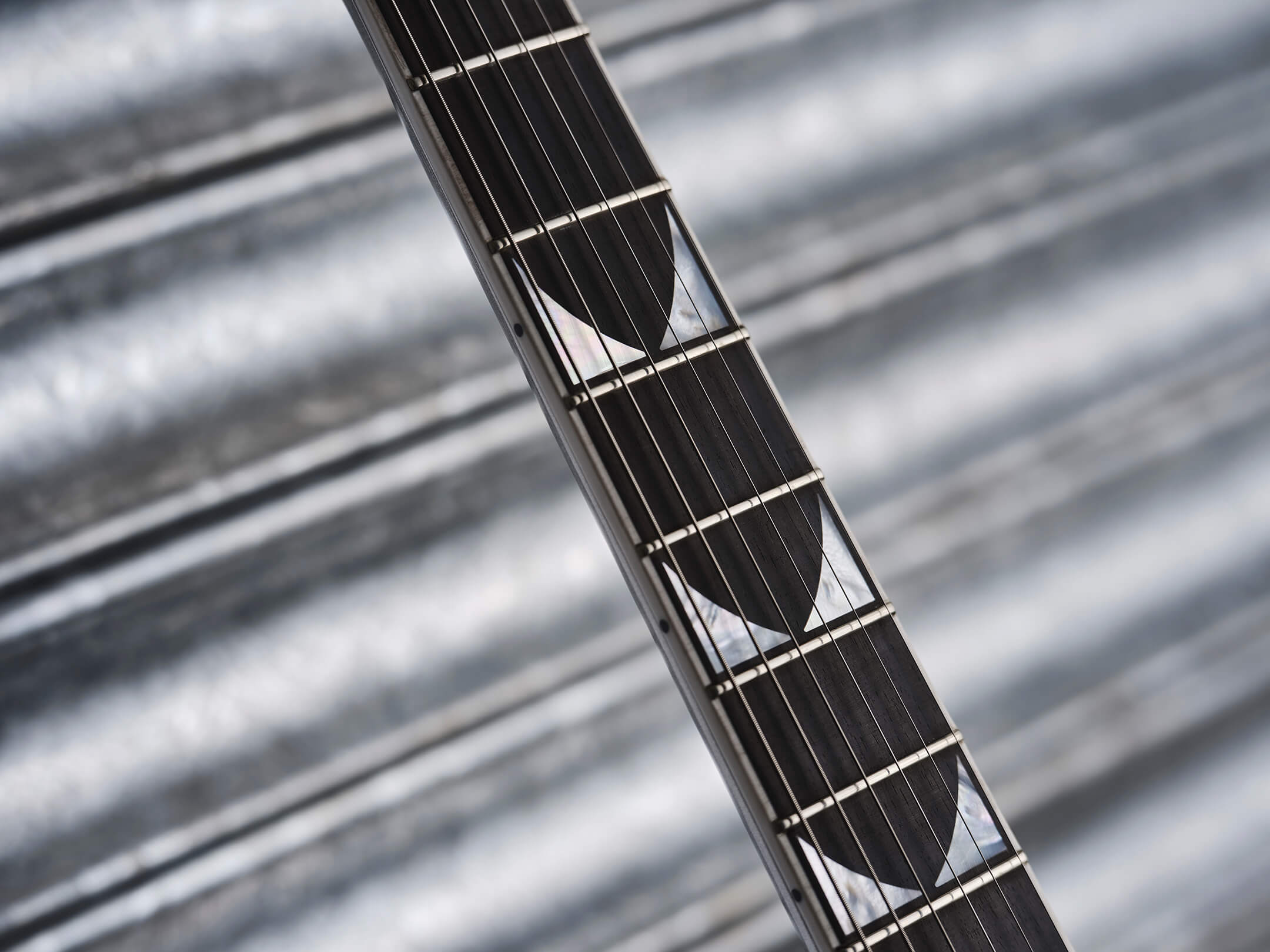 Pickup appointment comes in the form of two Seymour Duncan Thrash Factors selected by a three-way toggle switch. For the majority of his time with Dean, Dave used a signature set of Seymour Duncan LiveWire active pickups, but for much of his career prior to that he was a devoted Duncan JB and Jazz user – and it’s those pups that are all over the classic albums. Perhaps a nostalgia for those tones led to the design and release of the Thrash Factors back in 2017 – heavily influenced by the JB/Jazz humbucker combo – and it’s this high-output but passive pairing that he’s selected for his first Gibson model.

The publicity material makes a reference to ‘custom wiring’ but, with just two volumes, one toggle switch and master tone, that doesn’t seem to mean much of significance. One more difference: the jack is located in the upper wing rather than on the pickguard. 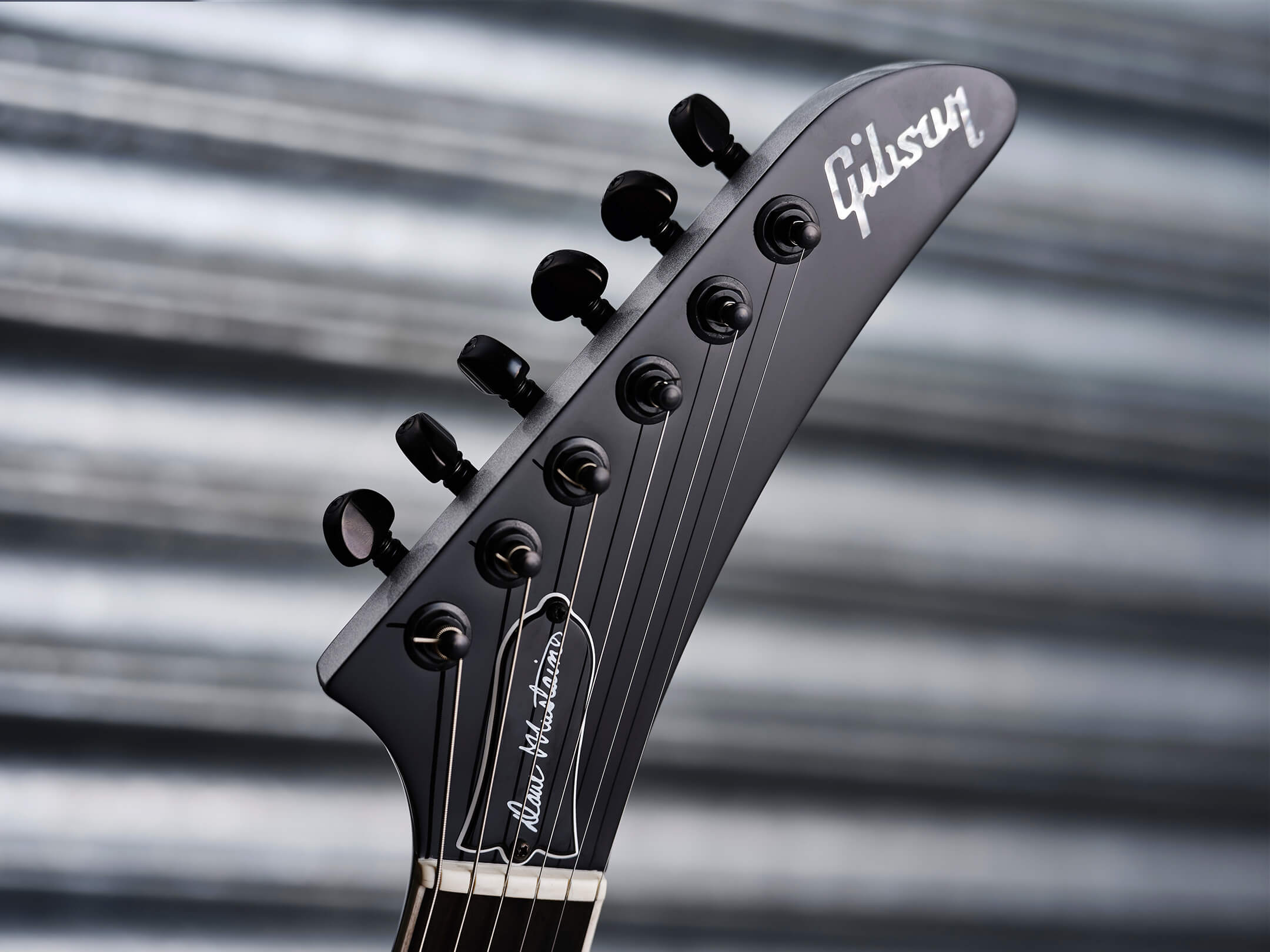 We don’t play Vs on a regular basis – well, not many people do – so every time we negotiate that idiosyncratic shape it feels like a maiden voyage. As ever, first order of the day is to fit strap-locks or you risk at some point witnessing, in horrifying slow motion, the instrument’s descent to the floor as the strap finally works its way loose. Thankfully strap-locks are included, and once secured it’s not as unwieldy as its appearance suggests. Still, a certain amount of acclimatisation is needed to stop us feeling that the guitar is floating in mid-air.

The ‘slim taper’ neck carve feels a little more rounded than the name suggests and, for us, leaves little space between thumb and palm – for some this will be the pinnacle of comfort. The spec sheet indicates a compound radius; this goes from 10” at the nut to a very flat 16” at the top of the ’board. 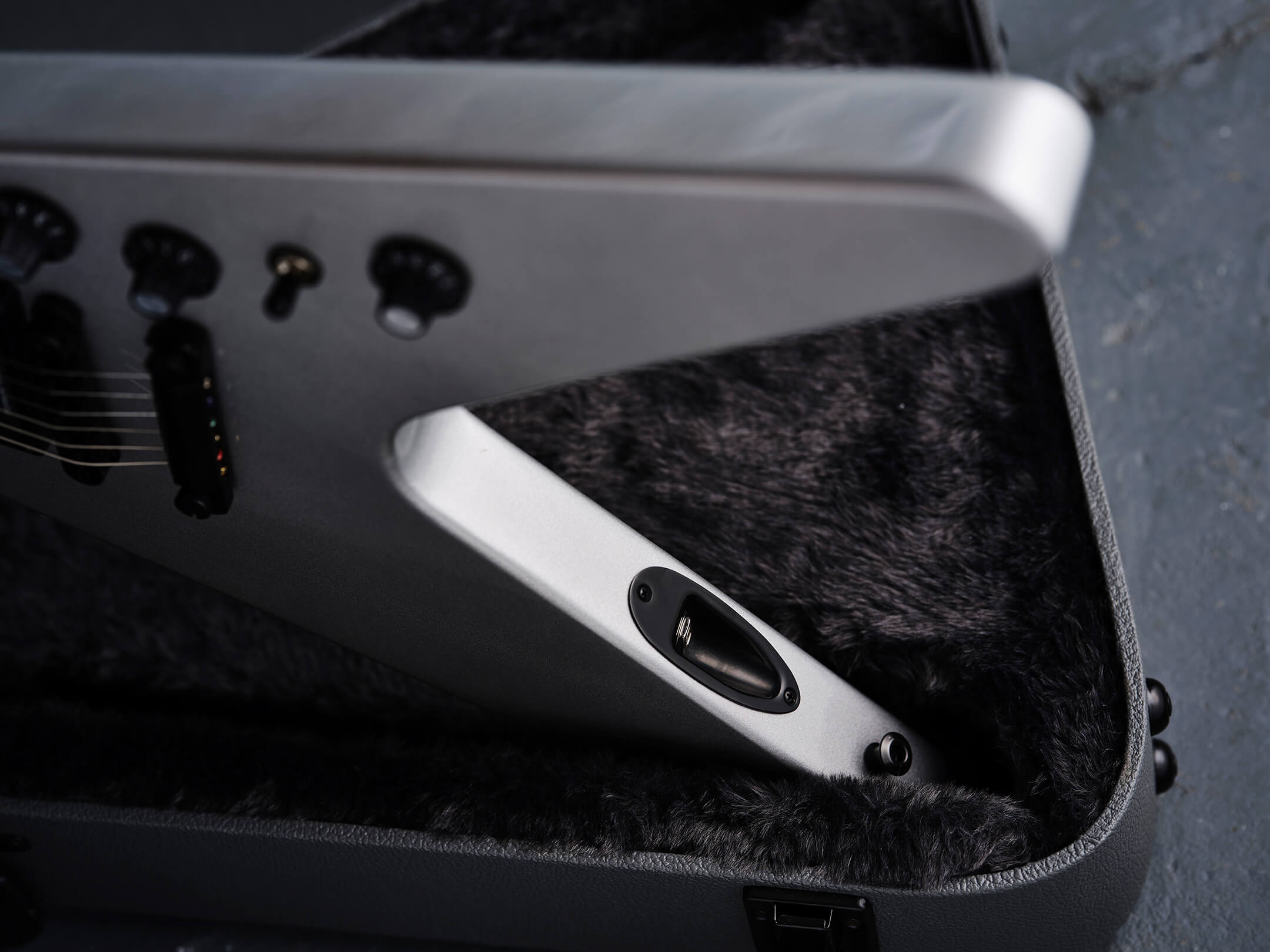 The dramatic carving of the V might make you think access to all the upper frets is going to be encumbered but that’s not quite the case, as the neck join only really begins to make its presence felt during forays to the very top of the board. The standard-appointed first 22 frets are all accessible with ease.

Unlike some metal gods we could mention, Dave has never really favoured scooped mids, preferring instead a raspily aggressive mids-rich tone – something the formerly favoured JB and Jazz ’buckers provide in abundance. The Thrash Factors, while based on the JB and Jazz, have been wound slightly differently, but the bridge pickup does behave remarkably like the JB. 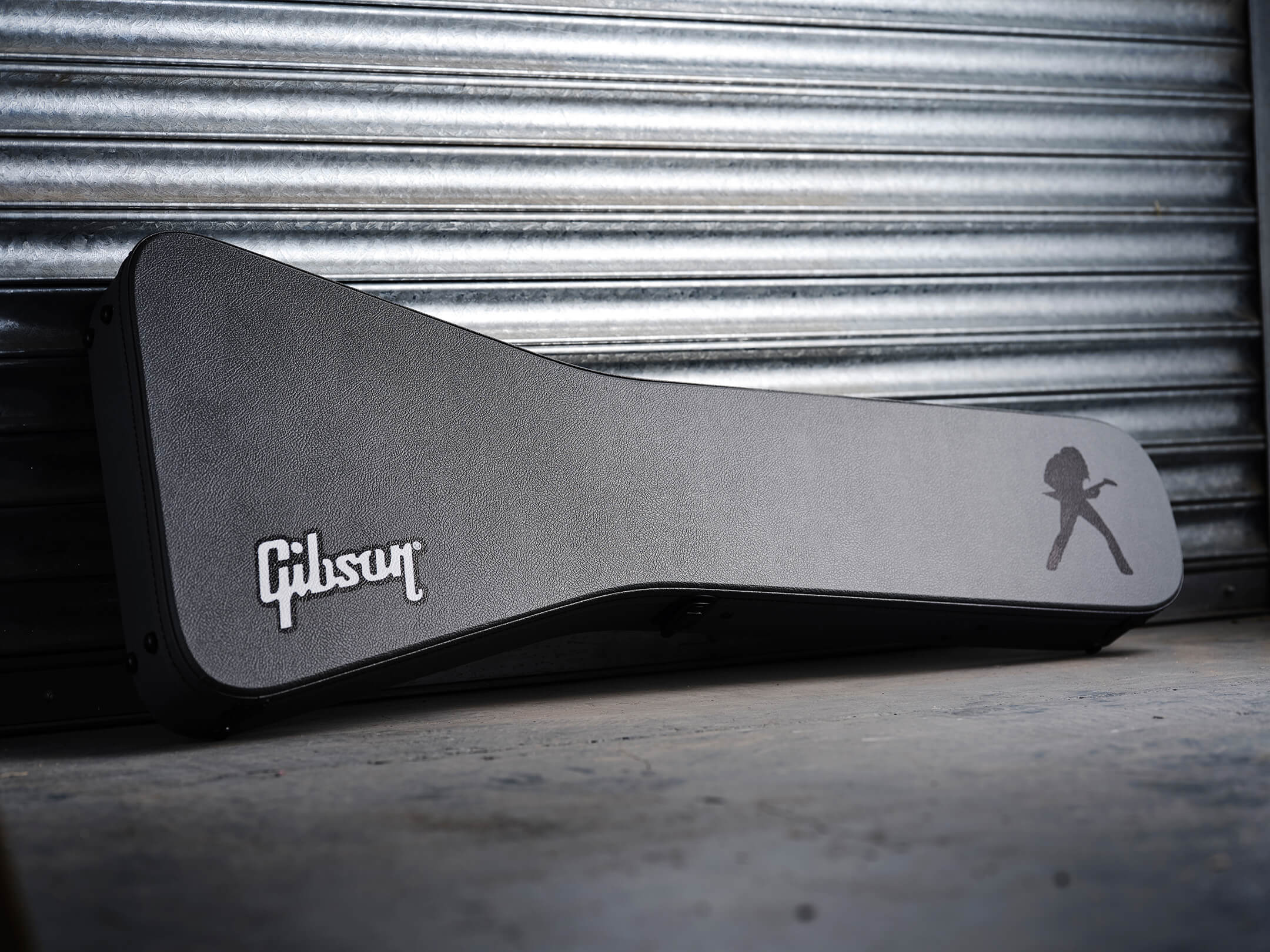 The midrange is slightly less accentuated, and when played through our Mesa Dual Rectifier we experience a slightly more focused low end and a touch more compression, both of which are eminently suited to the high-octane thrash metal work pioneered by Mr Mustaine. The neck pickup – again unsurprisingly – performs much like the Jazz: with pronounced mids and balanced low and high frequencies, it’s great for lead work and not too muddy for rhythm.

There will be those who grumble that this is a Flying V in shape only… but is that really an issue? If a classic instrument with vintage-correct spec is what you covet, then you’re hardly likely to be looking at a model sporting Dave Mustaine’s silhouette on the headstock anyway.

No, this is a signature instrument in the truest sense: a guitar designed for the artist’s preferences with only a cursory regard for the purists. If you play heavy metal guitar and like Vs, then the Gibson Flying V EXP will give you everything you want – and perfectly deliver the tones popularised by the godfather of thrash.