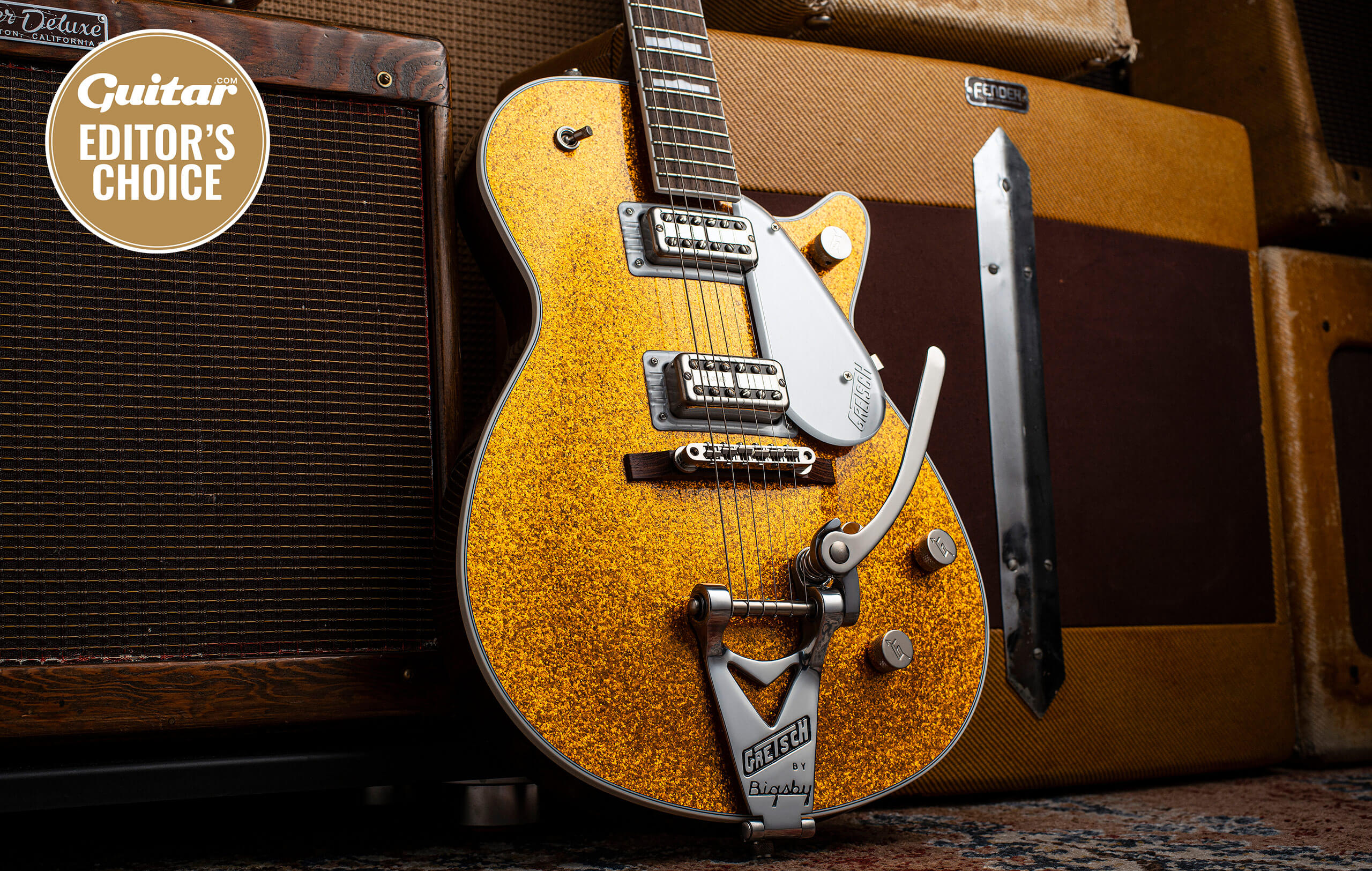 This remake of a guitar from the heady days of grunge and Britpop is proof positive that there’s far more to Gretsch than just rockabilly.

A stellar tribute that improves on the original in terms of playability, stability and tone.

Though most guitarists come to Gretsch via the likes of Chet Atkins, Eddie Cochran, George Harrison and Brian Setzer – or even Malcolm Young and Billy Duffy – those of us who were teenagers in the 1990s might cite Soundgarden’s Chris Cornell or Ash’s Tim Wheeler as their gateway drug to the brand. And it’s the Sparkle Jets wielded by Cornell and Wheeler that provide the template for this new Vintage Select model, which pays tribute to the 6129’s reintroduction at the end of the 1980s. 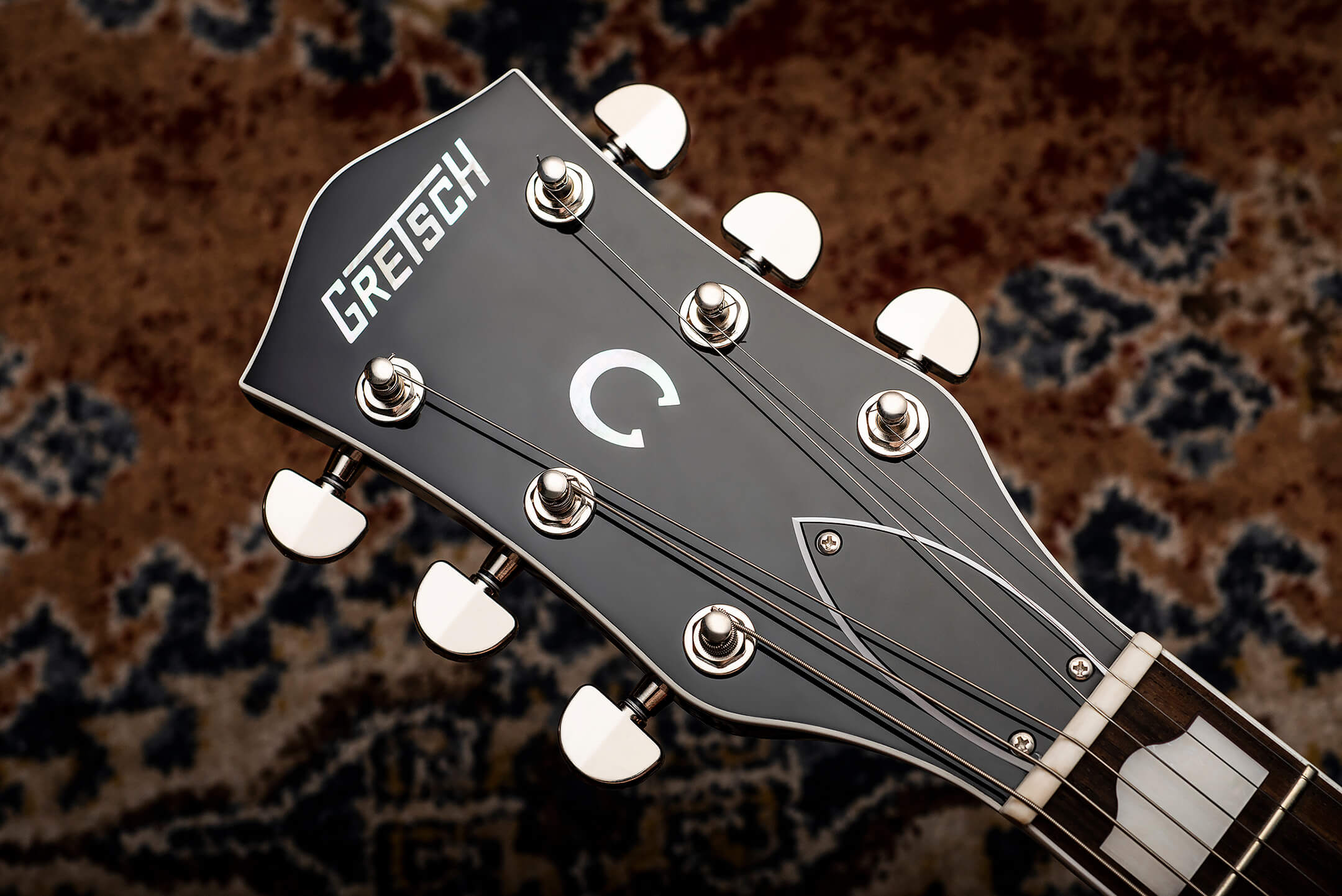 The enlarged black headstock, horseshoe inlay and pearloid hump-block markers are all present and correct – even the mahogany body’s internal chambering pattern is claimed to match that of the period – but the Gretsch aficionados among you will instantly note that the bridge and pickups have been given a substantial upgrade for this reissue.

Original models came equipped with a six-saddle bridge design notorious for rattling but here, this has sensibly been swapped out for a more stable Adjusto-Matic. The hot ceramic pickups, meanwhile, have been ditched in favour of TV Jones Classic Plus (bridge) and Classic (neck) Filter’Tron types.

Available in both Silver and Gold Sparkle finishes, aside from being one of the best-looking instruments on the planet, the Vintage Select ’89 Sparkle Jet is also testament to how well sorted modern Gretsch instruments are compared to either the pre-FMIC models of the 1990s or the instruments of the pre-Baldwin era.

Look as closely as you like; the construction, fit and finish here are basically flawless. In addition, stealth features such as the pinned bridge and the treble bleed circuit on the volume control make this a pro Gretsch you can gig confidently straight out of the box without the need for modifications – something which hasn’t always been a given! 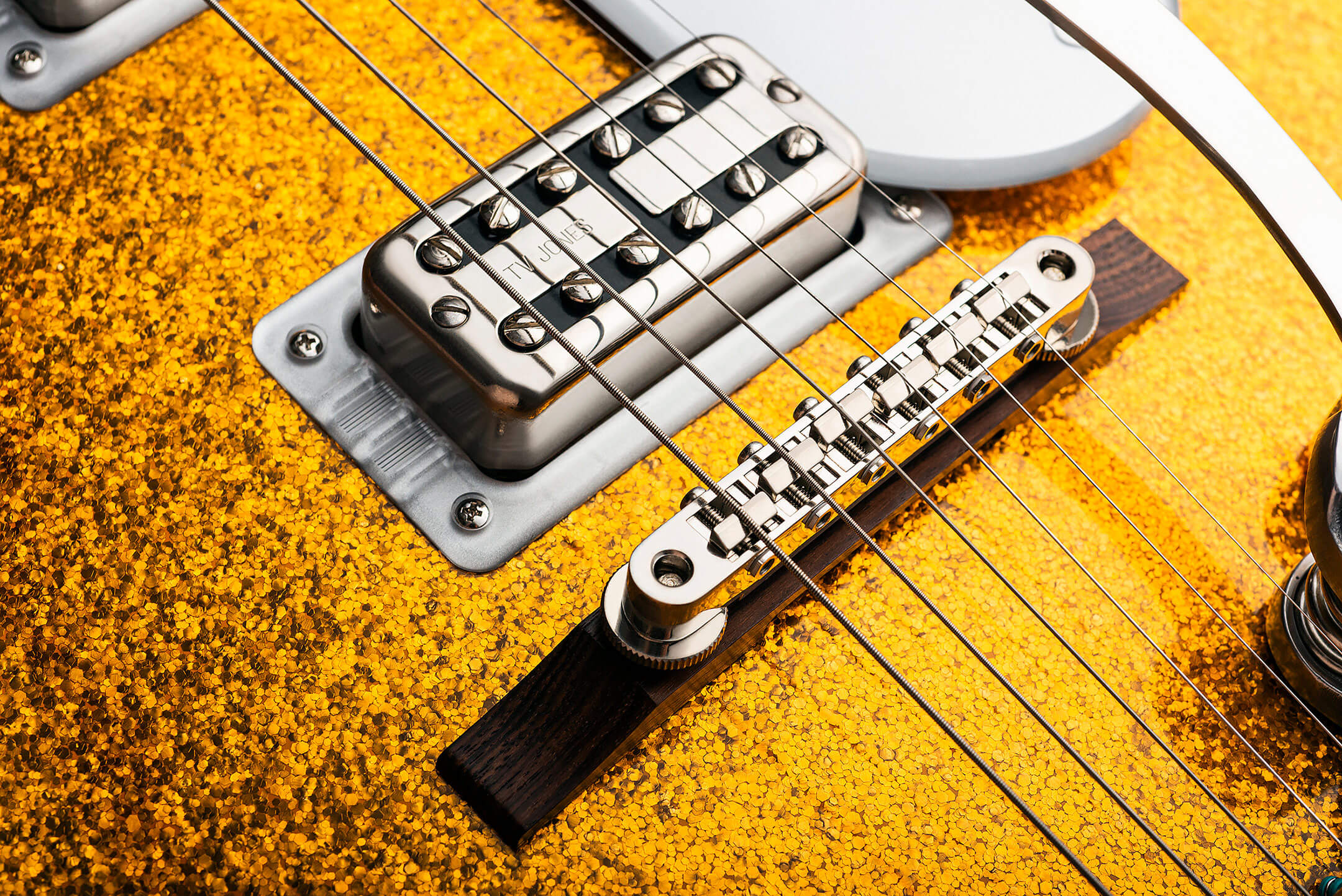 It’s tempting to suggest that you could screw a couple of TV Classics and a Bigsby to a kitchen worktop and get a great sound but, even by the high standards of Gretsch’s modern Japanese builds, there’s more going on here than simply the sum of some very good parts.

Plugged into an old 5E3 or similar, it’s instant Neil Young. The Sparkle Jet sings sweetly when you lay back and when you dig in, it bawls. While there’s no shortage of power on tap, the clarity, harmonic complexity and articulation here offer a noticeable upgrade on the High Sensitive Filter’Trons in our 2013 Gretsch Panther.

At 8.6lb, our review guitar is perhaps a little on the heavy side but certainly not as weighty as some 1990s models we’ve encountered. And the friendly neck profile and superb balance make it an instrument you can strap on for long rehearsals or live performance with minimal fatigue. There are plenty of naysayers where the combination of a Bigsby and tune-o-matic is concerned but it works perfectly here, with a frictionless feel that’s among the very best factory Bigsby setups we’ve encountered. 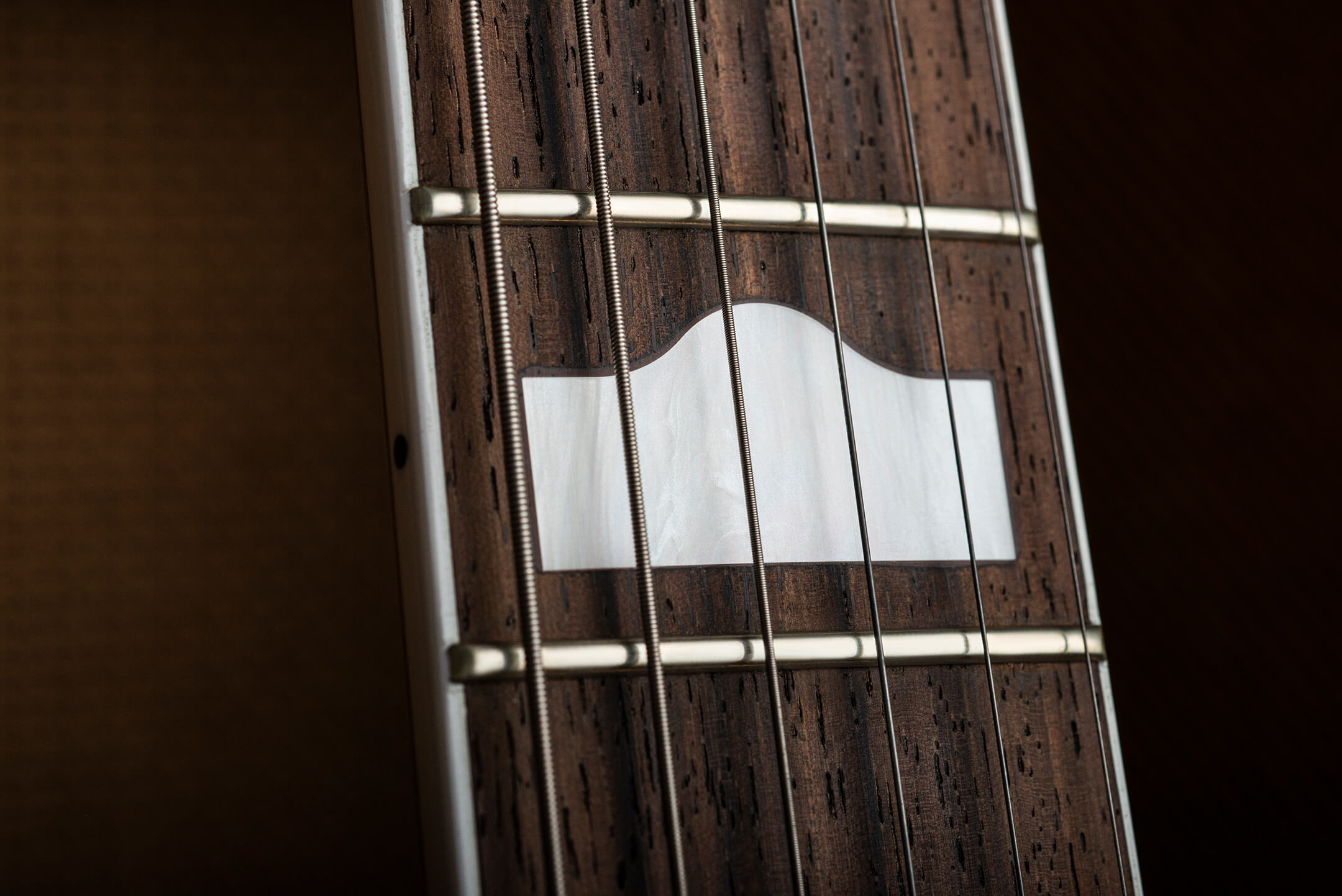 This is obviously one of those visually dazzling designs that’s hard to walk past without picking up but when you do, you won’t want to put it down either. The only alteration that might improve the recipe would be to add one of Gretsch’s handy String-Thru Bigsby anchor bars for ease of stringing but honestly, everything works so well on this particular instrument that we’d be loath to change a thing. 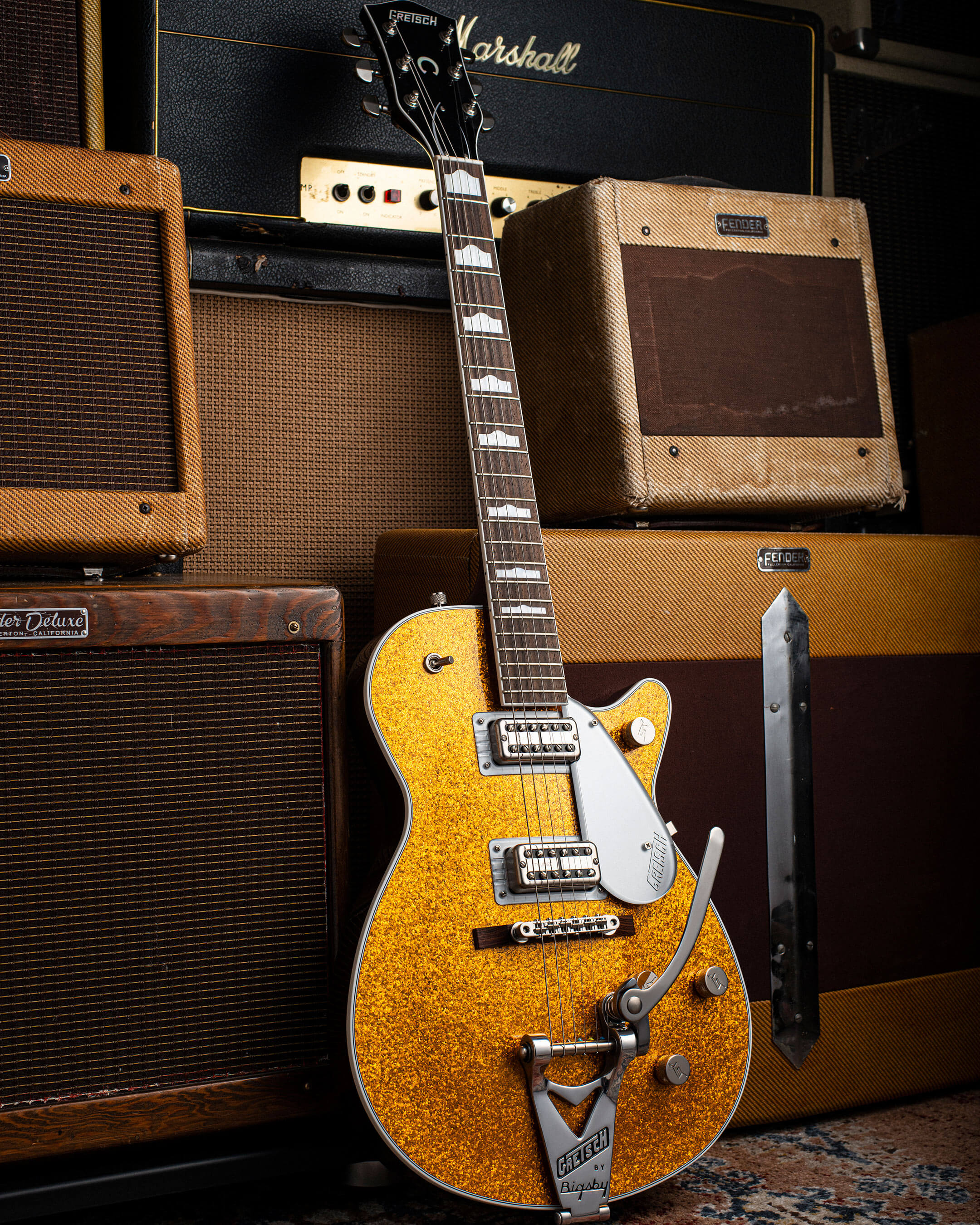