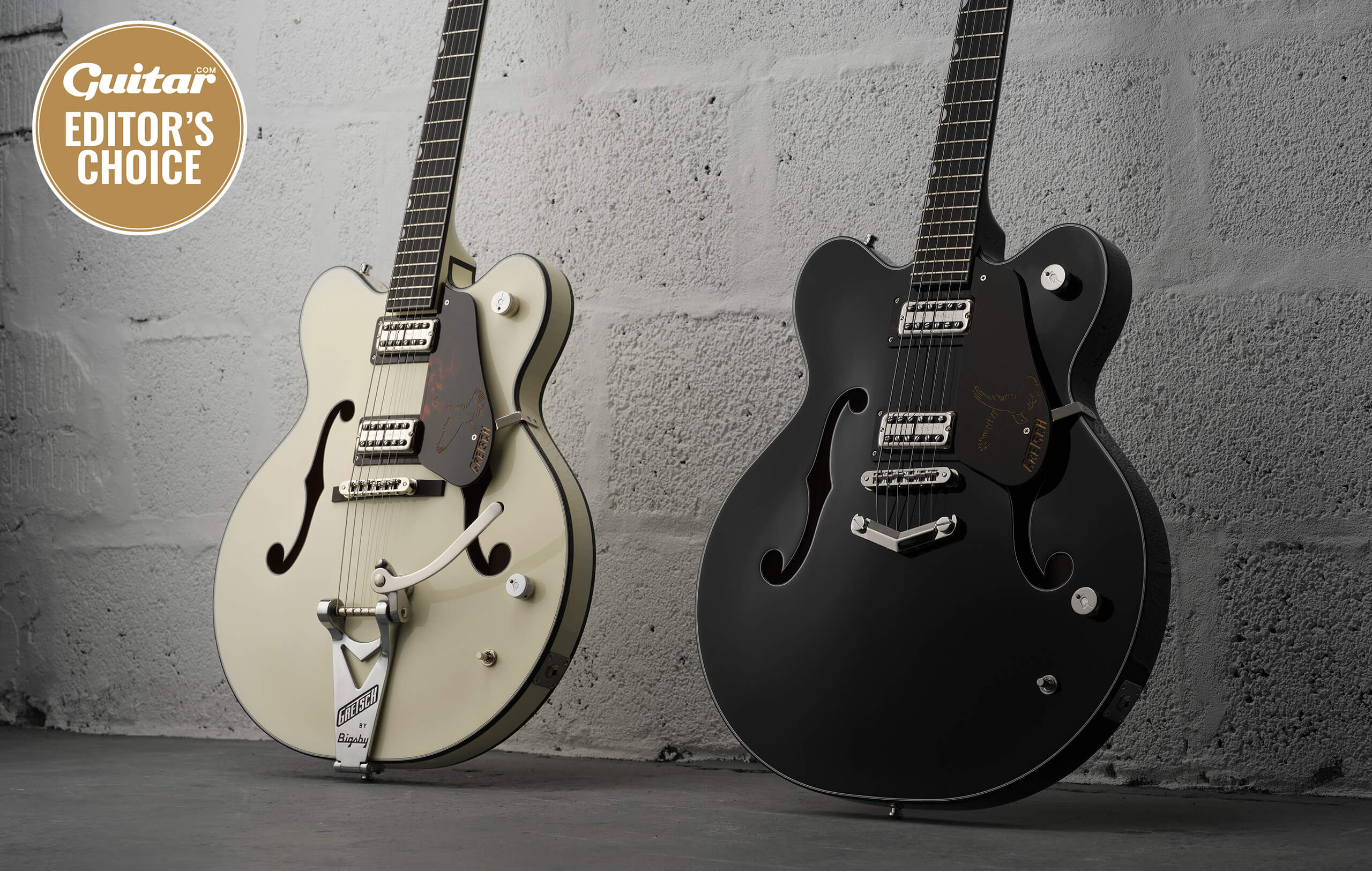 Whether you’re a Gretsch devotee or yet to be convinced, these birds of prey are primed to give you the lift you need.

Guns N’ Roses axeman Richard Fortus has superb taste in guitars. Fortus spent his childhood at NAMM shows surrounded by shiny six-strings and those formative years blessed him with an eye for detail, quality and the deeply cool. As such, the multi-faceted rock lord is often seen with an instrument that looks and sounds awesome but whose origins remain an enigma to non-connoisseurs.

That said, there is no mistaking the headstocks of the handsome guitars we have here – their shape alone would suffice even without the winged vertical logo that can only mean one thing: Gretsch Falcons.

Not a man to do things by halves, Fortus commands two versions of his signature model. Though his first Gretsch guitar was a 1966 Tennesean, the siren call of the Falcon has ensured that at least one of them is on the GNR rack at all times. While those instruments have mostly been single-cuts, the signature guitars come in the arguably more versatile – and punk AF – double-cut configuration. Johnny Thunders be praised!

In a modern rock exploration of natural dualities, each of the Fortus Falcon models has a distinct personality dictated by that most sexy of specifications: scale length. We take a moment to cool down after that erogenous revelation and bask in the knowledge that the White Falcon is full-fat, with a 25.5-inch scale and a Bigsby B6 as per Fortus’s explicit instructions. The Black Falcon, meanwhile, comes with a hard tailpiece and a bend-friendly 24.6-inch scale length.

Even to a dispassionate observer these are beautiful guitars. More classic 1950s than Baldwin-era Gretsch, they are positively brooding with deep tortoiseshell binding and scratchplates that suits both white and black models and coincidentally ensure that the position markers are actually visible (which isn’t a given when stage lights hit sparkly binding). The fretboard inlays are limited to pearl thumbnails on the bass edge and a subtle white double coachline, while the silver Grover tuners are a lot less shouty than the gold art deco Imperials usually found on this headstock.

By Gretsch standards, the hardware is spartan. There’s a pair of Fortus’s Filter’Trons, voiced to compliment the thunder of a Slash-powered Les Paul loaded with PAFs. The controls are arrayed with practicality in mind, with volume on the lower cutaway and tone on the lower bout. All the knobs are ruby encrusted, as we’d hope. The only other control is a selector switch located deep on the lower bout.

We select our longest strap and begin testing.

The agony of choice bites hard but, after a moment’s gentle perving, we begin with the shorter-scale Black Falcon straight into a cooking tube amp – just as nature intended. The first powerchords are explosive. The richness and complexity we’d expect from a shorter-scale instrument are all there but balanced with a quick response. It’s the Gretsch sound with a touch of Gibson 335 and it absolutely rocks.

The neck pickup is detailed, and while more than capable of delivering a soaring lead tone – yes, on a Gretsch – it also shines with fat, ringing chords and we even get some tasty 7th and 9th arpeggios in there without things turning to mush.

Both pickups together provide an exuberantly hollow honk, which we imagine would be the very thing to allow a certain top-hatted lead guitarist to express himself pentatonically while feeling supported in both the treble and bass registers. On its own, it is a great sound for bluesy La Grange-isms.

All this hints at good things to come from the bridge ’Tron and, a flick of the safely positioned toggle – given Fortus’s propensity for breaking his thumb on shoulder-mounted switches, he elected to keep the thing out of harm’s way – unleashes a gratifyingly chewy voice that kicks imperial measures of ass.

Swapping guitars, we plug in the full-scale, Bigsby-equipped White Falcon. The results are distressing on a personal level. This reviewer has owned and loved (deeply) a single-cut White Falcon for many years and, with sentimentality set to one side, it is clear that the Fortus signature model is a superior instrument both ergonomically and, most egregiously, sonically.

In contrast to its hardtail twin, the White Falcon’s full scale takes things back to more familiar tonal territory. This is immediately apparent in the taut neck pickup sound, which is crisper than its sister’s and more articulate.

The same is true of the middle position and the bridge. The latter is sensational – the perfect, chiming sweet spot between a Telecaster and a P-90 SG but with a spring to the note that you only get from a Bigsby-equipped instrument.

That Bigsby, by the way, is drilled to make string changes a plier-free experience. The guitar’s bridge is pinned and this, in conjunction with the roller saddles, means potential for more aggressive whammage, which we dutifully explore to the full. The tuning remains defiantly solid.

Unkind commentators have noted that if your best-intonated guitar is a Gretsch then you have a problem. That does not apply here. Both guitars sound great all the way up the neck and the double-cut design means that you can get involved with the high notes on a meaningful basis. Another lovely touch is the use of audio taper pots, which makes controlling gain from the volume knob a breeze.

If you love Gretsch, you need to arrange some quality time with these guitars. If you are yet to be convinced, then these majestic birds of prey might just get you there. Given the deluge of artist signature guitars on the market, it’s a welcome experience to encounter not one but two instruments that push an established brand to new heights. Very impressive indeed.