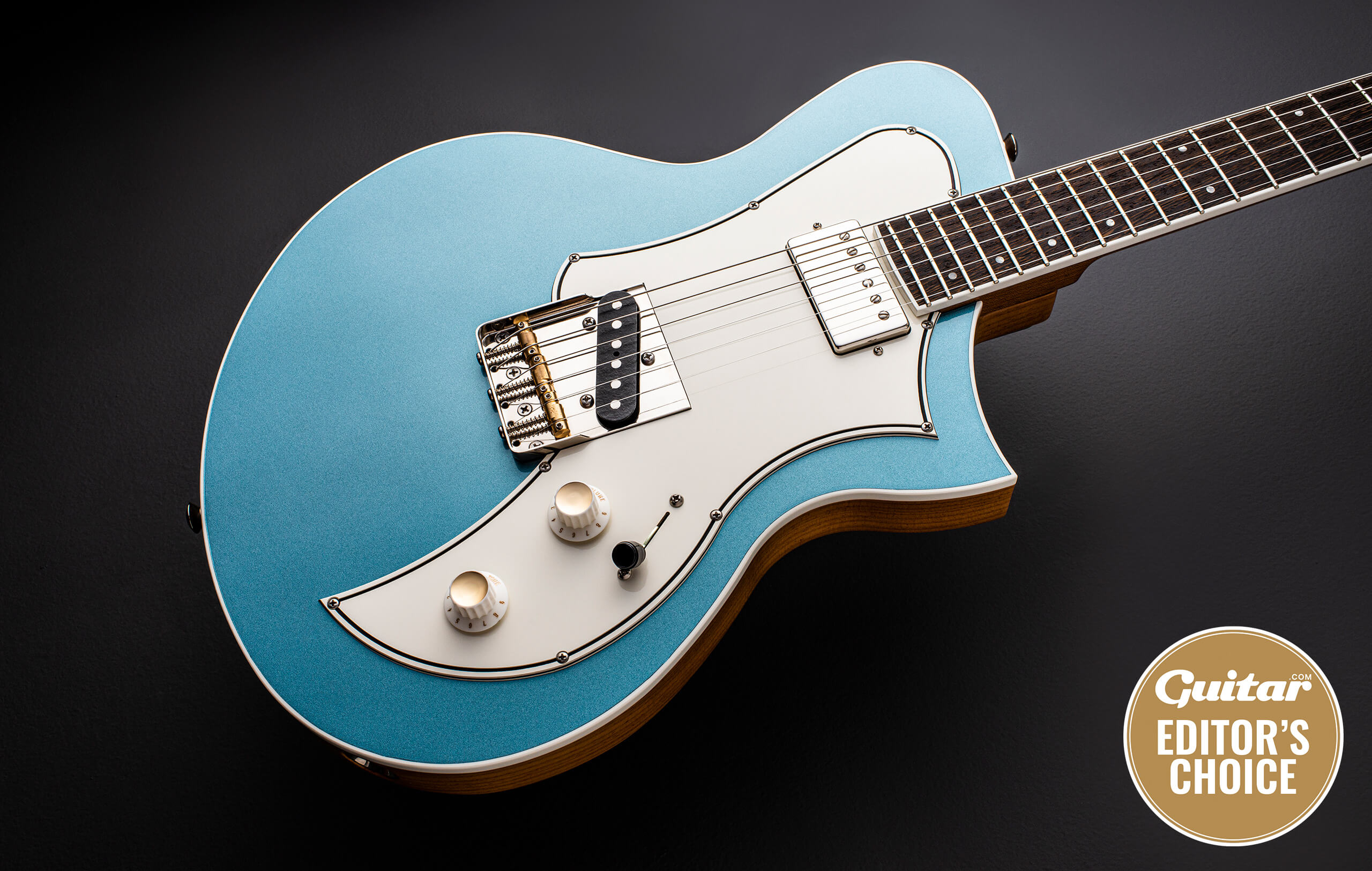 Kauer continues to combine new and old in search of guitar mastery. Is this its most complete instrument yet?

There was a time, gentle reader, when if you wanted some sort of achingly cool retro-inspired electric guitar, you either had to modify an existing instrument past the point of recognition or make one yourself. The past decade, however, has seen an evolutionary spike in superbly crafted guitars that bring the Jetson spirit of optimism to the handmade six-string. One of the handful of luthiers at the forefront of this movement is California’s Doug Kauer, whose guitars come inscribed with the legend “Made with the Kauer of Love”. As mission statements go, it takes some beating.

Kauer’s instruments, a gentle melding of big-name design language with a dash of Guyatone, Teisco and Airline weirdness, have found their way into the hands of a number of eminent players, including Scott Holiday of Rival Sons. But as we will see with this Korona model, Kauer guitars are more than just the spoils of war for rock royalty.

In some ways a response to the pandemic – proceeds from the first 15 Korona models were donated to charity, raising more than $30,000 for food banks and disaster relief via preorders alone – Kauer hopes that this new design will continue to be a literal instrument of change for years to come.

Slipping the guitar from its Mono gigbag, our first impressions are positive. With its elegant Pelham Blue finish on the top, white body and neck binding, and swooping scratchplate design, this is an objectively good-looking instrument. The caramel-coloured swirls of the roasted pine body are very attractive, and the maple neck, also torrefied, is capped with a wenge fretboard. 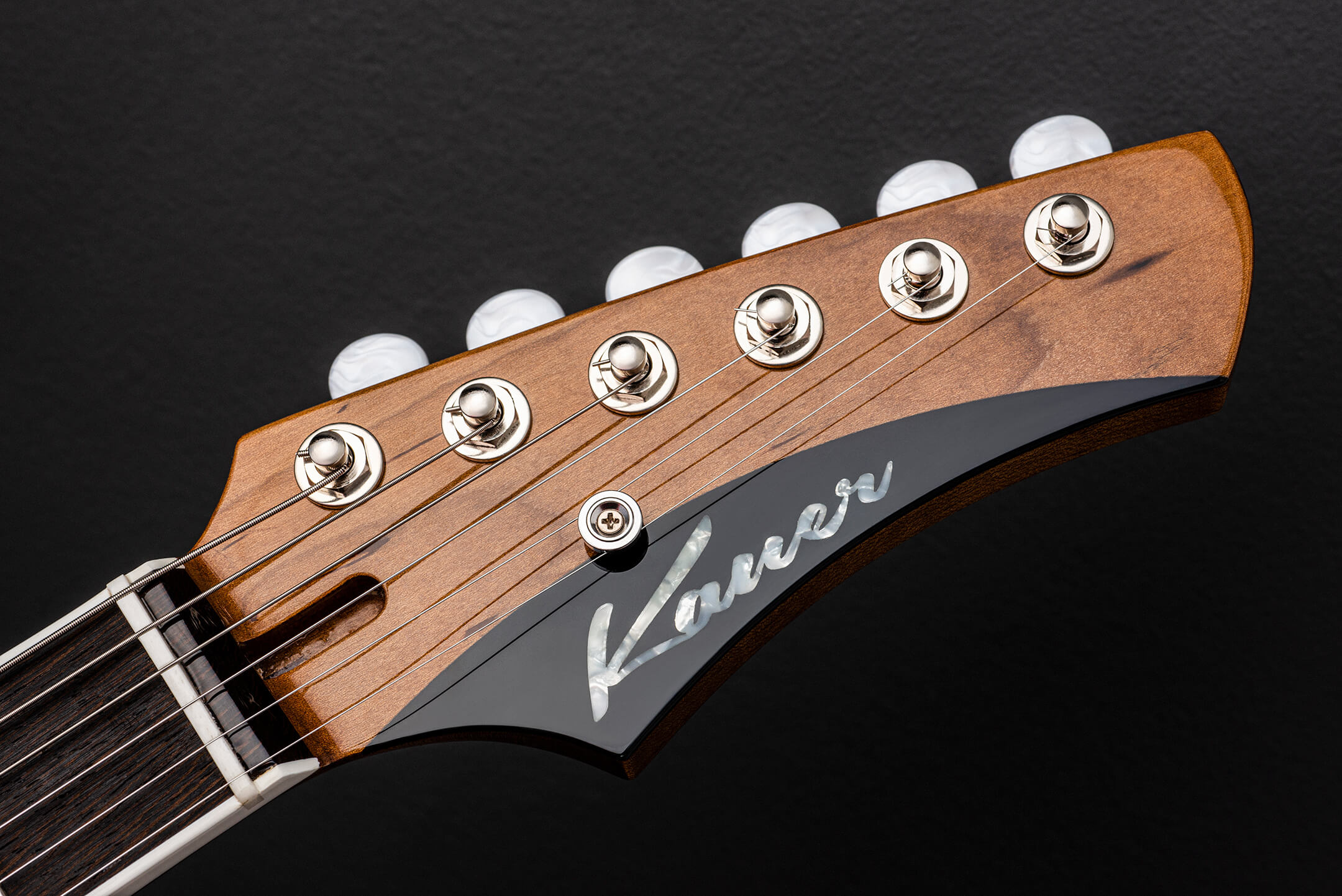 Our iteration of the Kauer Korona is essentially an offset T-type with an Advance Plating Telecaster-style bridge that features three compensated brass saddles and whose design eliminates the less player-friendly edges. Both pickups come courtesy of magnet supremo Jason Lollar, with a J-Street single-coil in the bridge and a shiny PAF-style custom El Rayo in the neck position. The latter was voiced specifically for the Kauer Korona model to bring out all the inherent snap and detail of the design. The controls comprise a simple three-way blade and a master volume and tone capped with a pair of white witch-hat knobs with gold centres.

The Korona is evidently the result of joined-up thinking from Kauer. From the Dunlop straplock-ready buttons to the control positions and inset input jack, there are many small touches here that enhance the playing experience. The design of the body and the belly chamfer also make for a comfortable squeeze despite the Korona’s full 25.5-inch scale length. 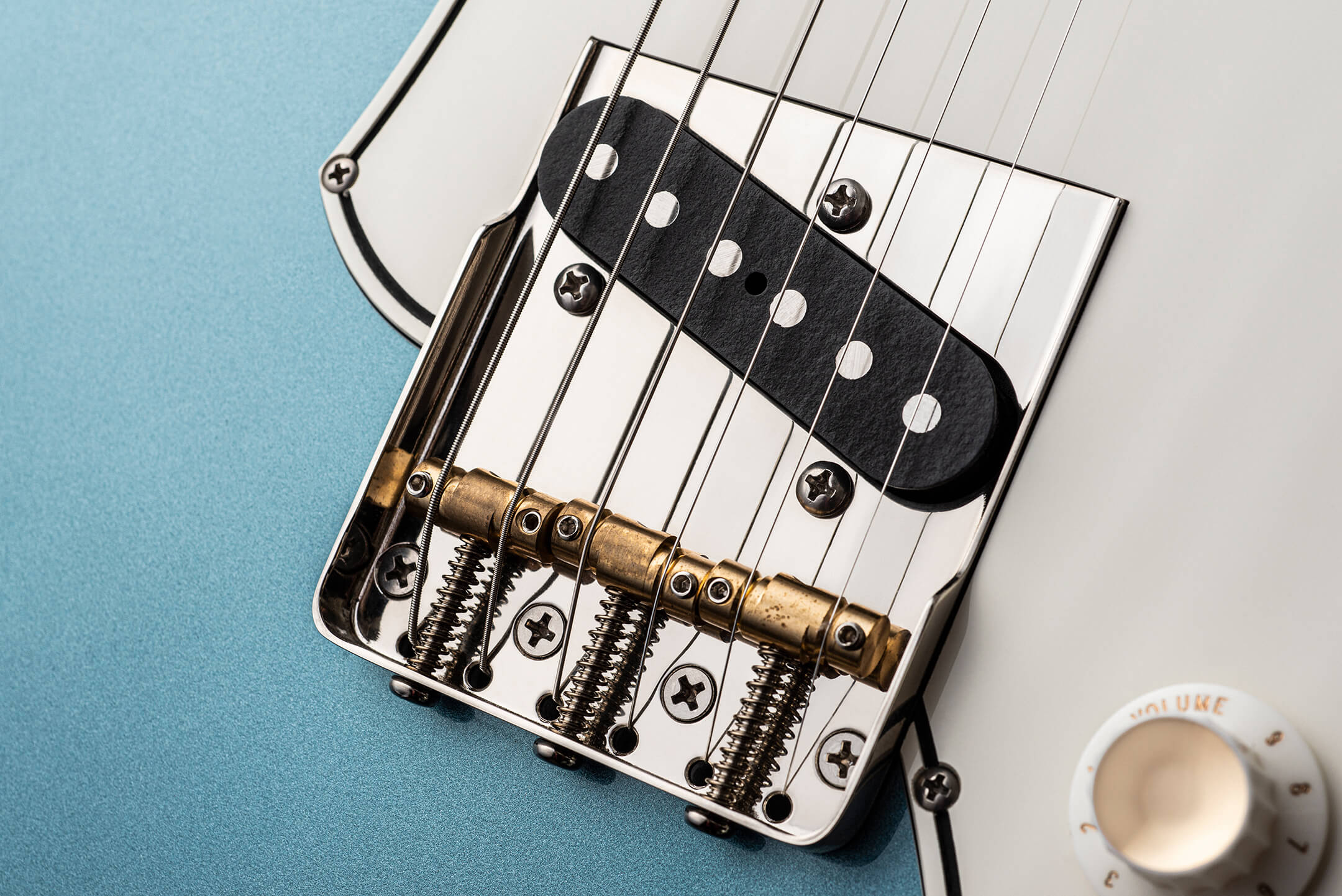 Our first unplugged chords reveal a springy and immediate response, which leaves us fairly confident that we know what to expect when we plug into our early 1990s Cornford Hurricane. These expectations, however, are shattered by first contact with the bridge pickup, which does an exceptional job of translating that acoustic snap into a detailed voice full of grunt and shimmer, depending on your pick angle and hand position.

This guitar feels lively. There’s a vibrancy to each note – from its initial crisp attack to the smooth bloom and musical decay – which suits every approach we throw at it. The middle position is deliciously expressive when clean, and it can get greasy and funky too, but we’ve rarely heard simple arpeggios sound this good. There’s something else going on here. It’s not quite a T-style sound – there’s a slice of Strat in there too, maybe even the fluteyness of a lipstick pickup but with a lot more power.

The neck humbucker, tweaked by Jason Lollar to suit the Korona’s scintillating personality, is detailed and articulate while remaining warm and soulful. That’s not an easy balance to pull off – but there are many things about the Kauer Korona that will defy traditionalist preconceptions. Even as we run the gamut of clean to crunchy timbres, we are unable to find a setting that doesn’t sound engaging and musical.

Does it handle the heavy? Yes, to some extent. It will cheerfully melt faces with a Big Muff but if you hope to run this thing through a Diezel VH4 for those sweet djent toanz, you might be better served by an instrument that leans more on aggression than subtlety to make its point. 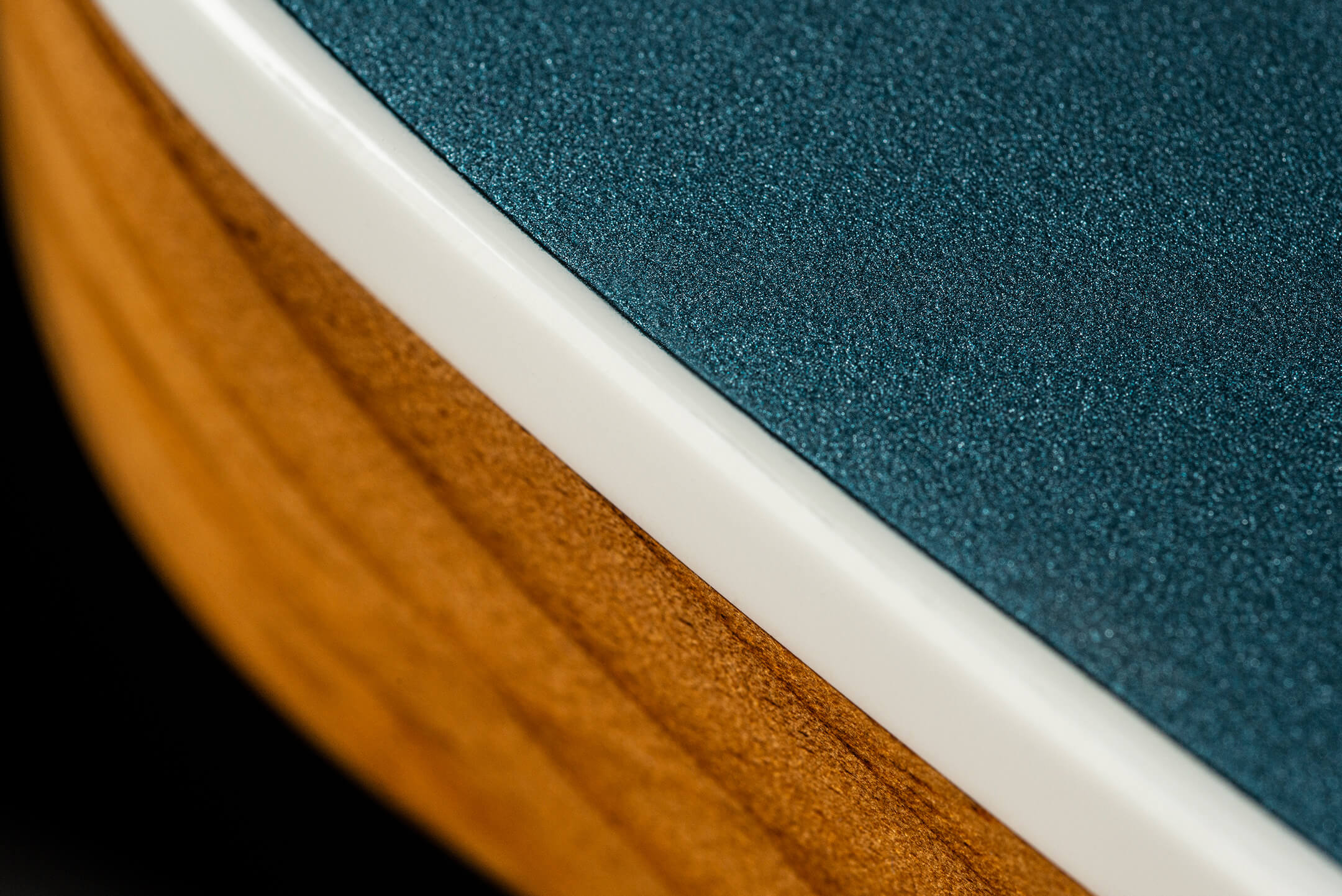 That said, the joy of guitars such as the Korona is that the initial design serves as a blank canvas and the options are many. The first step when spec’ing your own model is the choice of a Thermopine or swamp ash body. If a T-style voice isn’t your thing, you can go for gold foils, PAFs, Filter’Trons or other pickups from Wolfetone, Lollar and TV Jones. There are multiple colours to choose from, and hardware options include a Bigbsy vibrato for wobble-lovers and slider switches for retro-minded masochists.

Of course, great sounds don’t mean much unless you can play the thing. In this case, however, the guitar has been Plek’d to within an inch of its life at Kauer’s California HQ. The result? Gossamer-like action with the strings virtually behind the frets. Playing the Korona comes close to that mythical autonomous, unsalted dairy-product-based experience we all strive for. The entire C-carved neck is a playground, and it handles big bends and bigger chords beautifully.

Some years ago, this reviewer bore witness to an extraordinary scene at the now defunct Holy Grail Guitar Show in Berlin. Upon learning that the instruments Doug Kauer intended to display there had been held up by customs, one of Kauer’s clients from the other end of Europe drove directly to the German capital with his own Kauer guitar for Doug to exhibit. That says as much about Doug Kauer as it does about his work, Korona included. 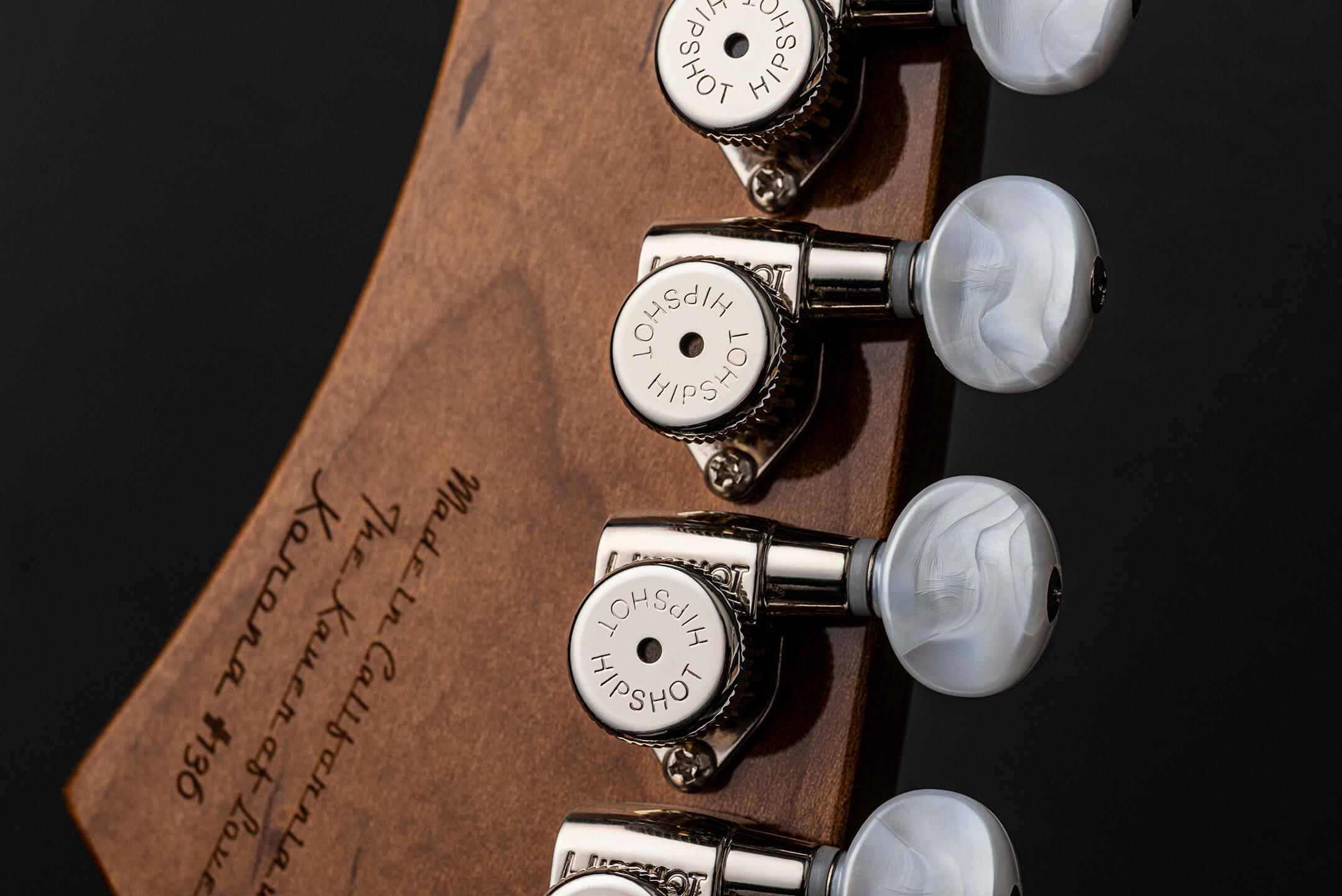