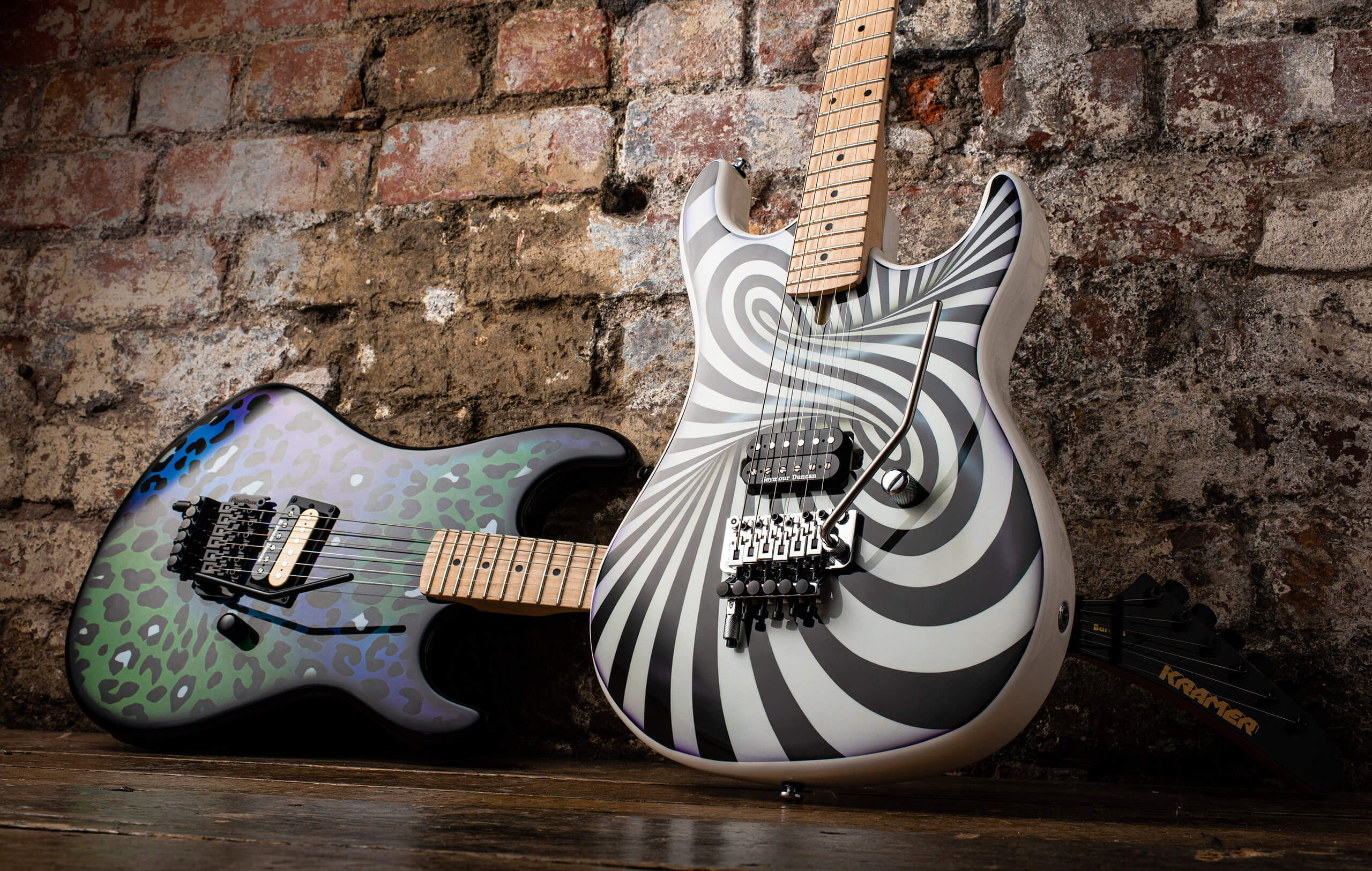 With the 1980s very much in vogue, Kramer’s new Custom Graphics series is a flamboyant reminder of what the brand stands for.

Though the company began by building aluminium-necked instruments in the mid-1970s, its move to wooden-necked guitars with hotrod stylings in the 1980s would prove to be extremely lucrative. By the end of the decade, thanks in no small part to its association with the likes of Richie Sambora and Eddie Van Halen, Kramer was producing some of the most coveted guitars on the planet. However, the original Kramer company would soon be dead and buried – even before grunge had the chance to kill it off.

Mounting debts, excess spending and a lawsuit from Floyd Rose saw the company fold in January 1991. Gibson acquired the brand later in the 1990s but fast-forward to 2021 and the Nashville company’s new management seem to be throwing their weight behind Kramer’s revival like never before.

Both of our review models are from Kramer’s new Custom Graphics Collection. According to Gibson Brands Product Manager Aljon Go, this series is a celebration of something that’s part of the Kramer DNA. “Kramers with wild finishes were some of the most fondly remembered guitars of that era,” he says. “We partnered up with some artists that have done Kramer graphics in the past and new artists, and collaborated with them to bring some of the energy and nostalgia and reintroduce it to a whole new generation of fans.”

The range consists of six different graphic finishes, with five variations available on the Baretta model and just one finish option on the The 84. The 84 honours what Kramer considers its golden age, and is an homage to the 5150 guitar that Van Halen played during his association with the company.

Seen here in a positively demure Rainbow Leopard finish, the Baretta is probably the most famous of Kramer’s creations and the model was the original mass-produced result of the company’s collaboration with EVH. Here we have a three-piece maple neck, with additional sections employed for the fingerboard and the tip of the headstock, which is back angled this time.

Despite constructional differences, both of these alder-bodied instruments feel remarkably similar to one another, aside from the slightly flatter radius of the Baretta’s ’board (12.6 inches versus 12 inches on The 84) and its slanted, ring-mounted Seymour Duncan JB. The slim C neck carves feel almost identical and it’s a predictably sleek and fast profile with only the thinnest of satin finishes. We wish the fingerboard edges had a more generous roll-over but at this price point such details are not entirely unexpected.

Guitars such as these would, of course, be incomplete without a locking vibrato system. Both come equipped with Floyd Rose units complete with Trem Stops and EVH’s patented D-Tuna.

With eye-popping finishes and 80s hard rock pedigree in spades, on plugging in, we inevitably gravitate towards the higher-gain profiles on our Kemper. Both guitars are almost indistinguishable sonically but deliver the benchmark for raunchy rock guitar tone: grunt, power, definition and clarity.

Palm-muted power chords are thunderous and single note riffs punch through with a perfectly rounded voicing. If you want more snap and less gain, pulling up the push/pull volume control on either guitar switches to parallel wiring. Okay, there aren’t many other tones to talk about but there are plenty of examples of great rock players augmenting their palettes with careful manipulation of the volume control. However, the 500k volume pots on both guitars have with a very steep taper, so don’t expect much roll-off or clean-up.

This may be a negative for some but, if you’d like more light and shade, swapping out a potentiometer is at least a very easy modification to make. In truth, it doesn’t diminish our experience, and the sheer simplicity encourages us to keep the overdrive engaged. Besides, if you are walking out on stage with either of these instruments, nobody in the audience will expect any great degree of subtlety.

Whether single-pickup guitars behave differently to those with neck pickups thanks to less magnetic pull on the strings is a topic that’s often debated. However, when plugging in either of these guitars, there’s little doubt that they are two of the best-sounding and most immediate rock guitars we’ve played. Coincidence? We’d say not.

The 1980s are back with a vengeance, then. It may be a frightening prospect for those of us who grew up in that era but there was definitely a sense of fun – embodied here in the striking finishes of the Custom Graphics series – that was perhaps absent in mainstream rock music during the subsequent decades. If you are too young to remember these guitars the first time around, we heartily recommend auditioning one to find out what all the fuss is about. 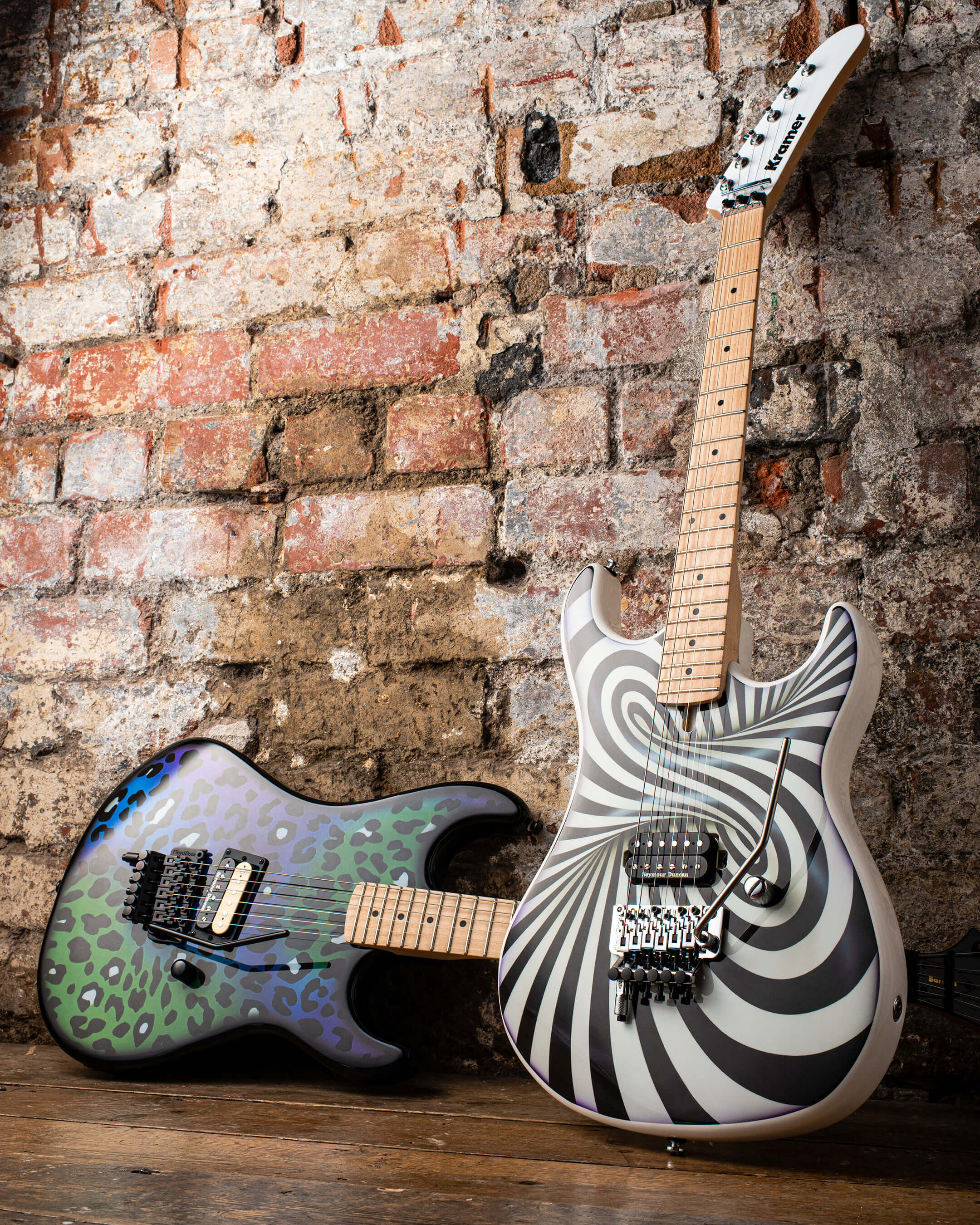