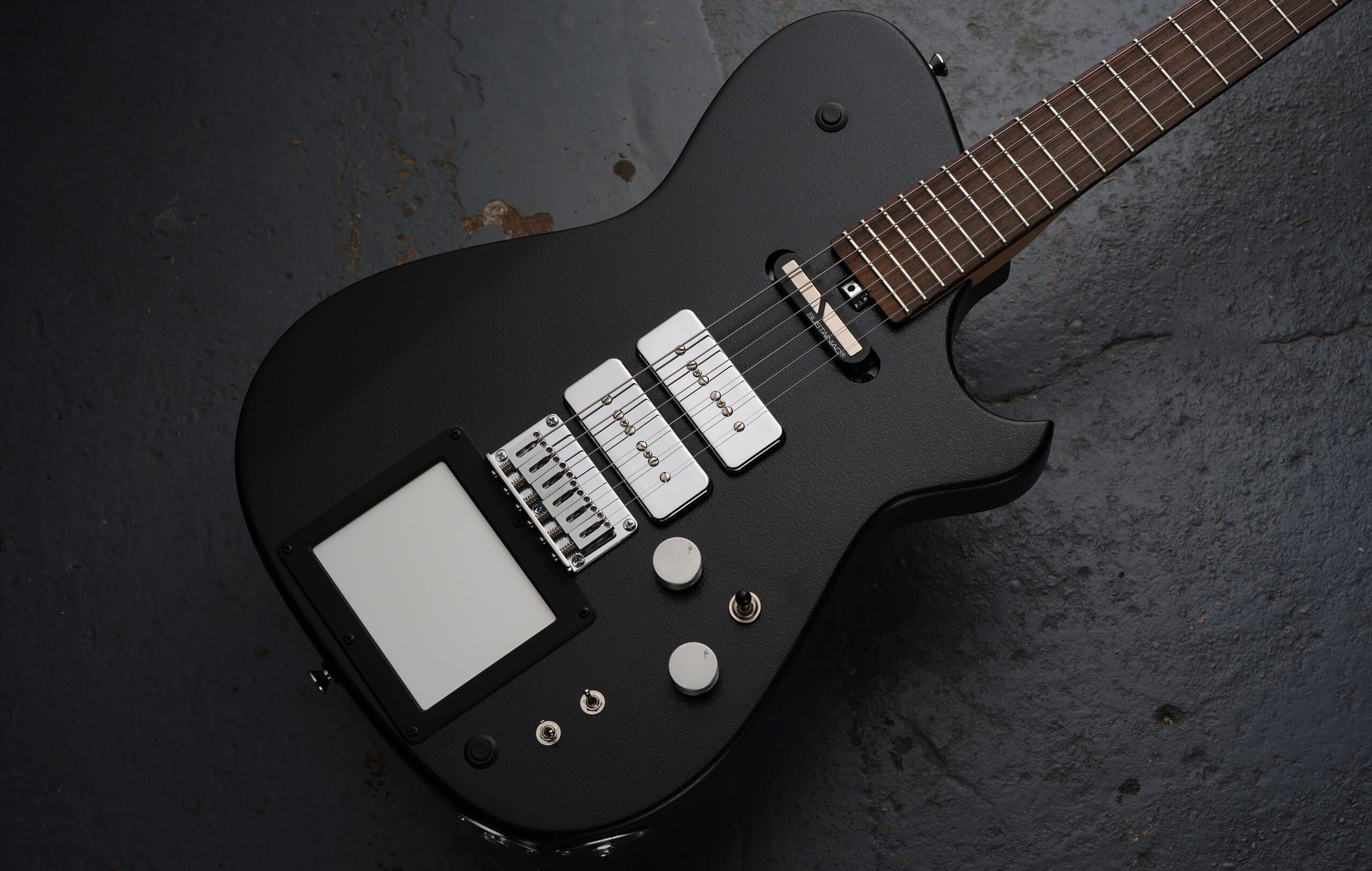 Gadgets galore here – so could the MB-2 be the powerhouse of creative expression that will unleash your hitherto unexpressed sonically strange musicality?

With onboard gadgetry that could inspire new ways to write and play, this may be the ultimate Matt Bellamy guitar, but it’s an experience everyone should try at least once.

Most of the Manson electric guitars in the wild are those that are created and manufactured by Indonesian manufacturer Cor-Tek; part of the collaboration between Cort and Manson to create an affordable line of the renowned T-style design. However, aside from that successful partnership, Manson Guitar Works continues to be a British company that has forged a long-lasting reputation of producing very high-quality boutique guitars. Given the profile of the artist they are most famously associated – who now owns a majority share in the brand – in the recent past they have been defined as the company that produces Matt Bellamy’s signature guitars, and to that end for 2022 Manson have produced a limited edition of two UK-built Matt Bellamy signature models — the DL-2 and the MB-2 – the latter, and our review model, is based on a limited-run special edition model from 2012.

The MB-2’s neck has been designated a ‘V’ description, although to our hand it feels more like a standard ‘C’ carve – slightly fatter than a modern-day Telecaster neck. Although our review sample doesn’t possess prominent figuring, the back of the neck is instantly recognisable as birdseye maple. At this price point, we are a little disappointed with the lack of rolled fingerboard edges but this isn’t always to everyone’s taste and let’s not forget this is a signature guitar, so perhaps Matt isn’t a fan. The slightly slanted neck plate provides easier access to upper frets but essentially our access is still a little restricted compared to a through-neck. However, a compound radius ensures that when you do travel to that area, string-bends are unrestricted. 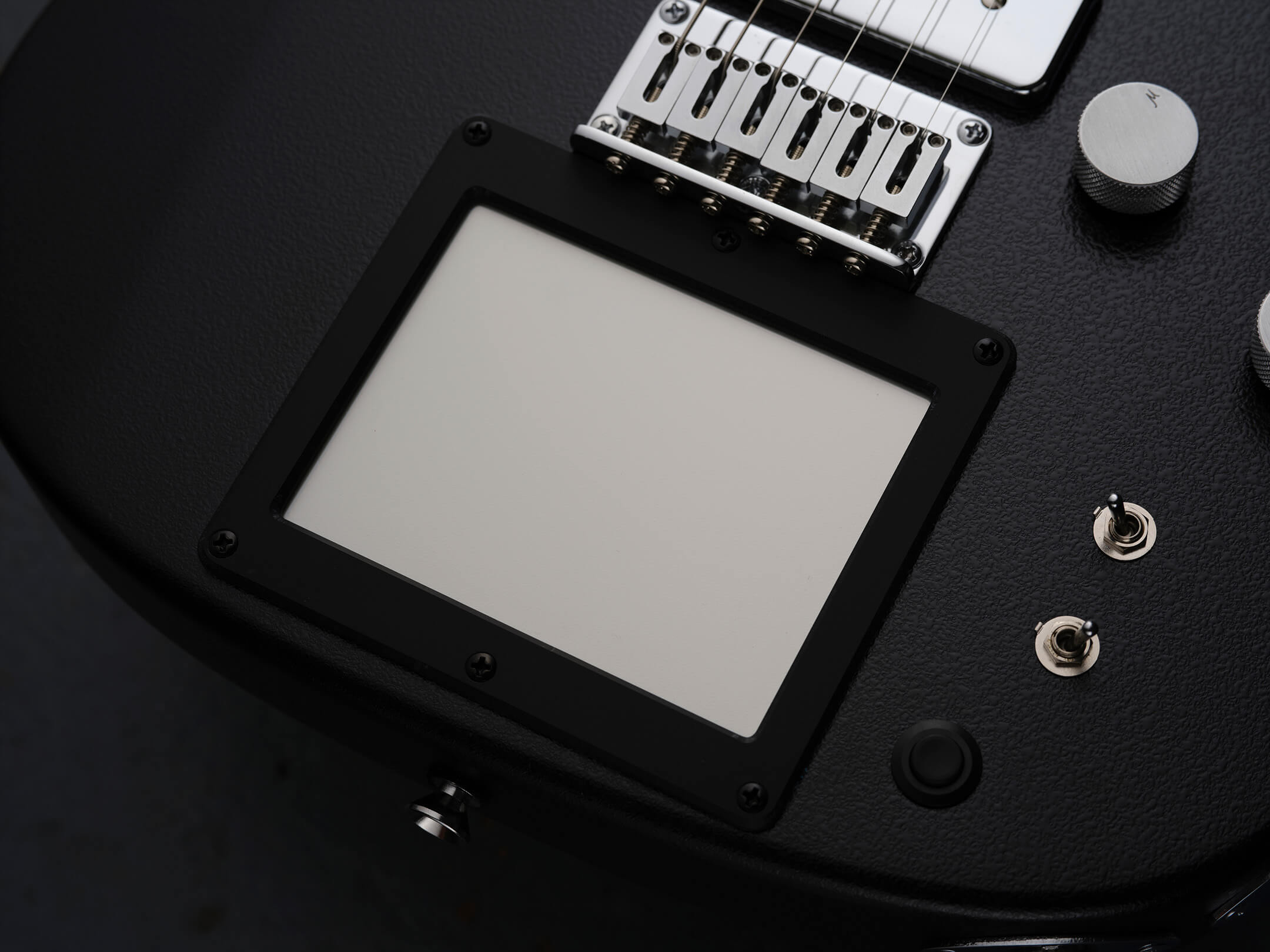 With his onstage space-age facial accoutrements, it makes sense that his signature guitar looks like the dashboard of the Starship enterprise, and that is most certainly the case with the illuminated X/Y MIDI pad and multitude of switches. That said, there is a heavy touch of the industrial too with aluminium volume and controls knobs, a bleak marker-less black ebony fretboard, and a stunning mottled Matt Black finish that could likely survive a tactical missile blast. The T-style that Bellamy has favoured throughout his career means that the control layout is a little congested but not unmanageable.

Whilst not unnecessarily complicated, it is essential to begin mentally compartmentalising what switch belongs to what gadget before diving too far in. The volume and tone controls are straightforward enough but even here there is a twist as the tone control acts as a push-pull which splits the onboard custom hand wound DB-90s, which are by default wired in series and act as a humbucker. The two small switches may be familiar to those in possession of a Sustainiac pickup system on their guitar; one is simply an on/off switch and the other switches between its three modes – Harmonic, Mix, and Fundamental. On the upper bout there’s also a killswitch which we find in need of a heavy dose of contact cleaner. Oh, and then there’s the X/Y pad… 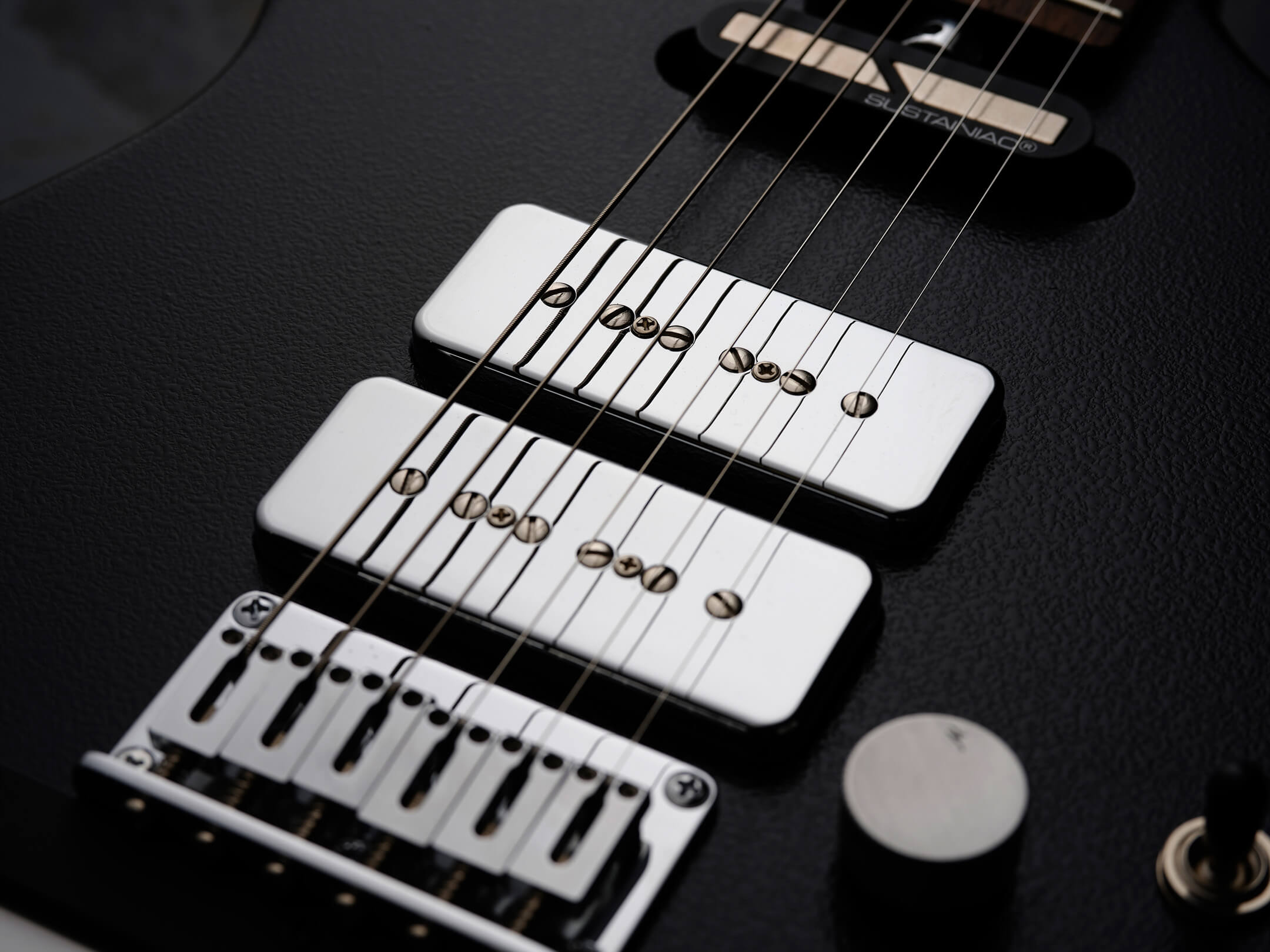 There are a variety of ways to take advantage of the X/Y MIDI pad, including hooking it up to a DigiTech Whammy pedal, but for its vast variety of effects we decide to use it with a Korg Kaoss Pad. To do this we connect our MIDI output, situated just above the input jack, into the MIDI input of the Kaoss Pad. This enables the guitar’s X/Y pad – not the Kaoss Pad screen – to become the default controller. From there we plug our guitar output into the mic input of the Korg and then exit via the phone jack into our Fractal Audio Axe-Fx III. MIDI connection aside we’re essentially using the Kaoss Pad in the same way we would a drive pedal.

The X/Y refers to the axis of the MIDI screen and by selecting one of the Kaoss’s low-pass filter presets we can control its resonance by swiping along the X axis and the frequency along the Y. This creates some interesting effects that could kickstart a song idea or lick for players. 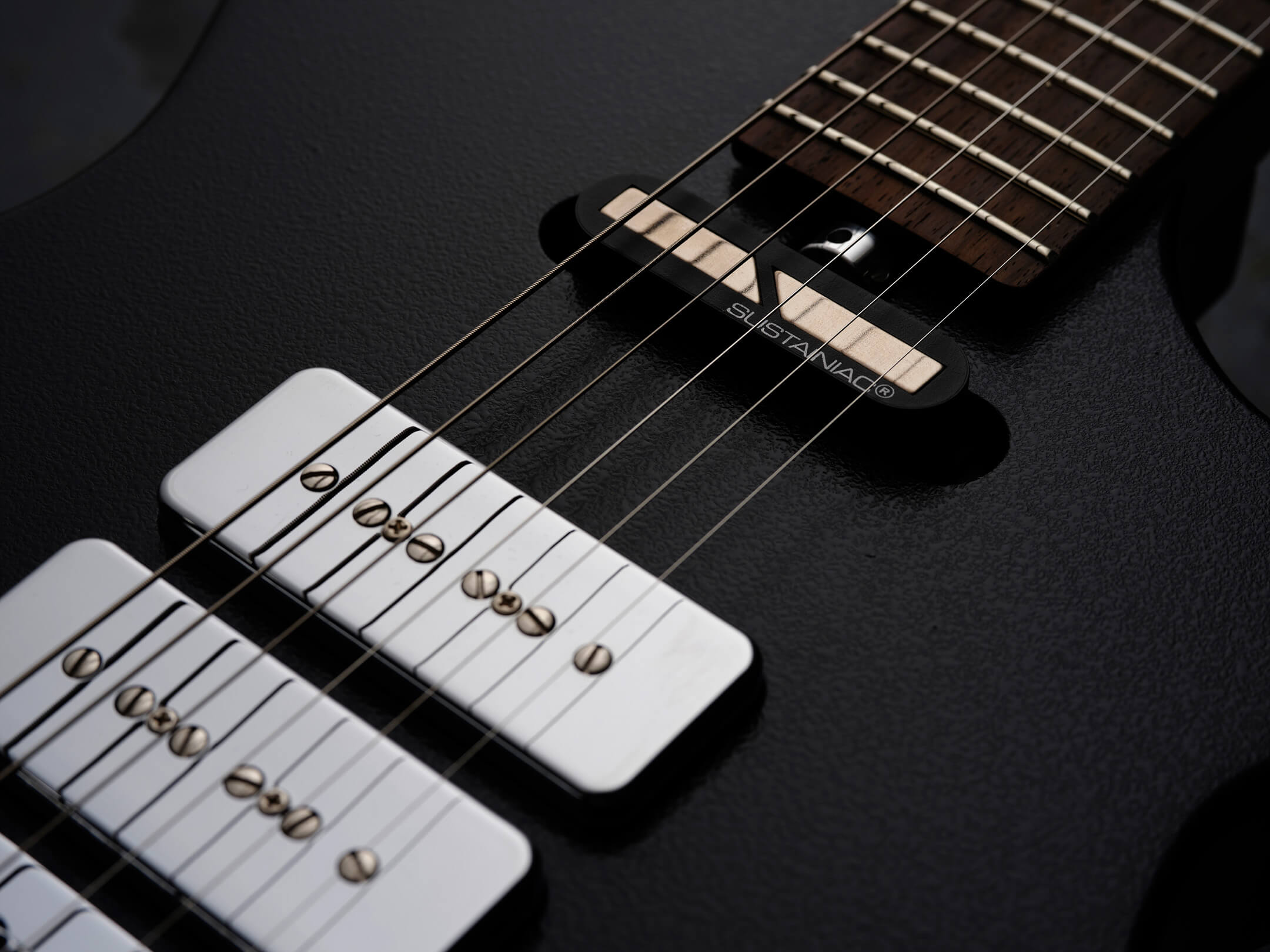 As we scroll through some of the modulation presets and settle on a ring modulator, we begin to recognise not only some of Matt Bellamy’s signature sounds, but also those employed by Tool and other sonically experimental bands. Many of these effects commandeer extensive use of your right hand so it can compromise rhythm parts. However, things are made easier – and interesting – when using the MIDI effects in conjunction with the Sustainiac Stealth Pro neck pickup. Once this is engaged our right hand is free to create elaborate effects by manipulating the X/Y pad.

Amongst all the hi-tech gadgetry sits two little artefacts comparatively from yesteryear – the humble DB-90 – Manson’s take on the P-90. The MB-2 employs two, both referred to as bridge pickups due to their proximity to the bridge and the fact that on the default position one setting they are wired together to function as a humbucker. Through a high-gain Diezel VH4 there is plenty of grunt and power on tap, though the overall tone is like a half-cocked wah, with many of the hi-frequencies stifled. Although a unique sound that’s especially suited for power chord workouts, in the lead department it suffers a little due to those attenuated high frequencies. 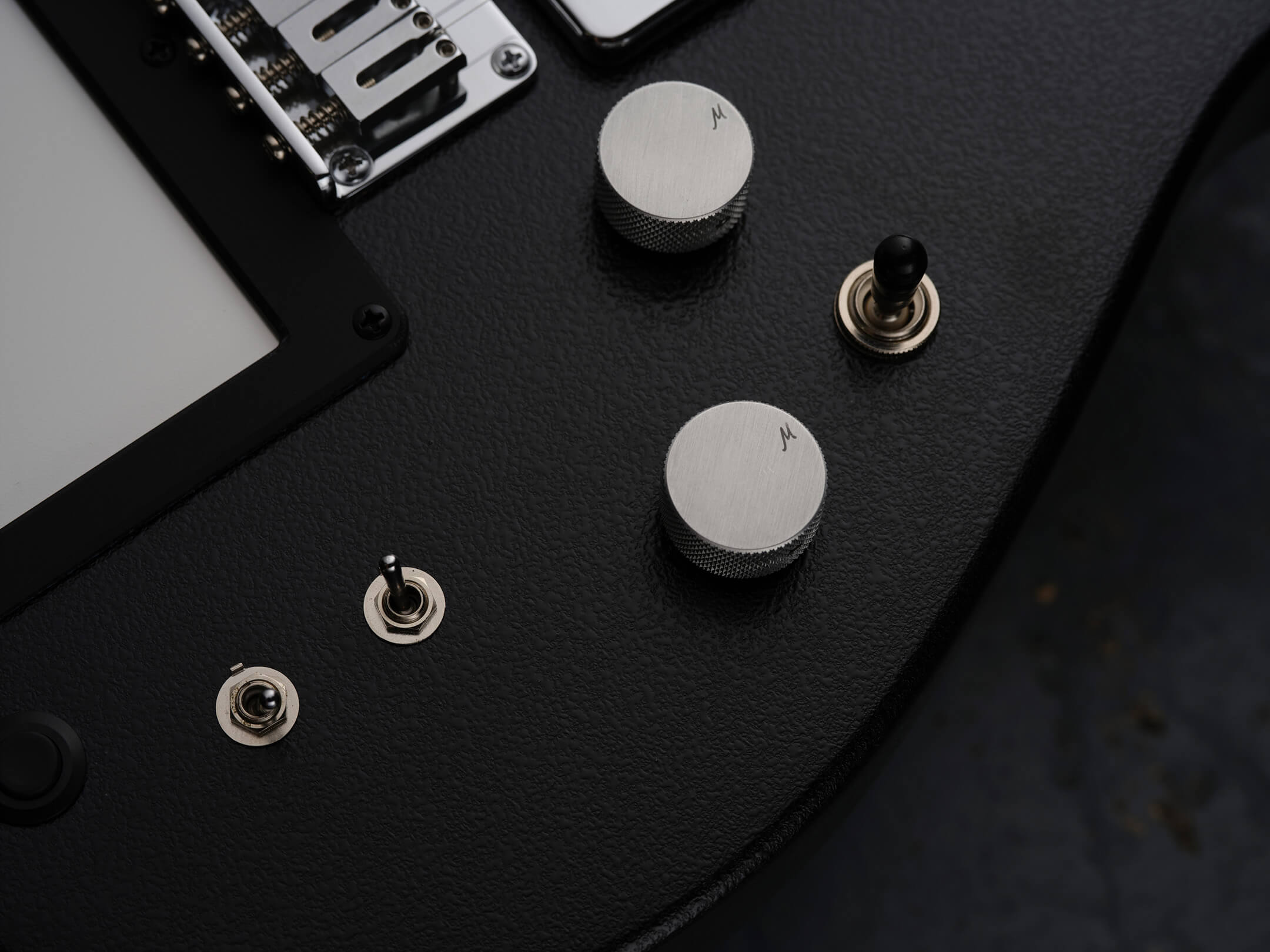 We are finally welcomed with a full-throated mid-rich tone when activating the push pull switch on the tone control; a sound that lends itself quite wonderfully to chunky rock chords. Compared to our PRS’s Tyson Tone P-90s – themselves no shrinking violets – the DB-90 nearest the bridge is voiced a little richer in the high midrange with a tad more power. Flipping the three-way switch – with push-pull still activated – to position two we get some very usable funk-rock sounds from the pairing of the single DB-90 and neck pickups.

Effect aside, the Sustainiac Pro is an underrated neck pickup, and its active circuitry helps create single note lines that are snappy yet fulsome. These sounds will be anathema to single-coil purists but for the more modern player they provide a great platform for exercising ideas that require that little extra power. 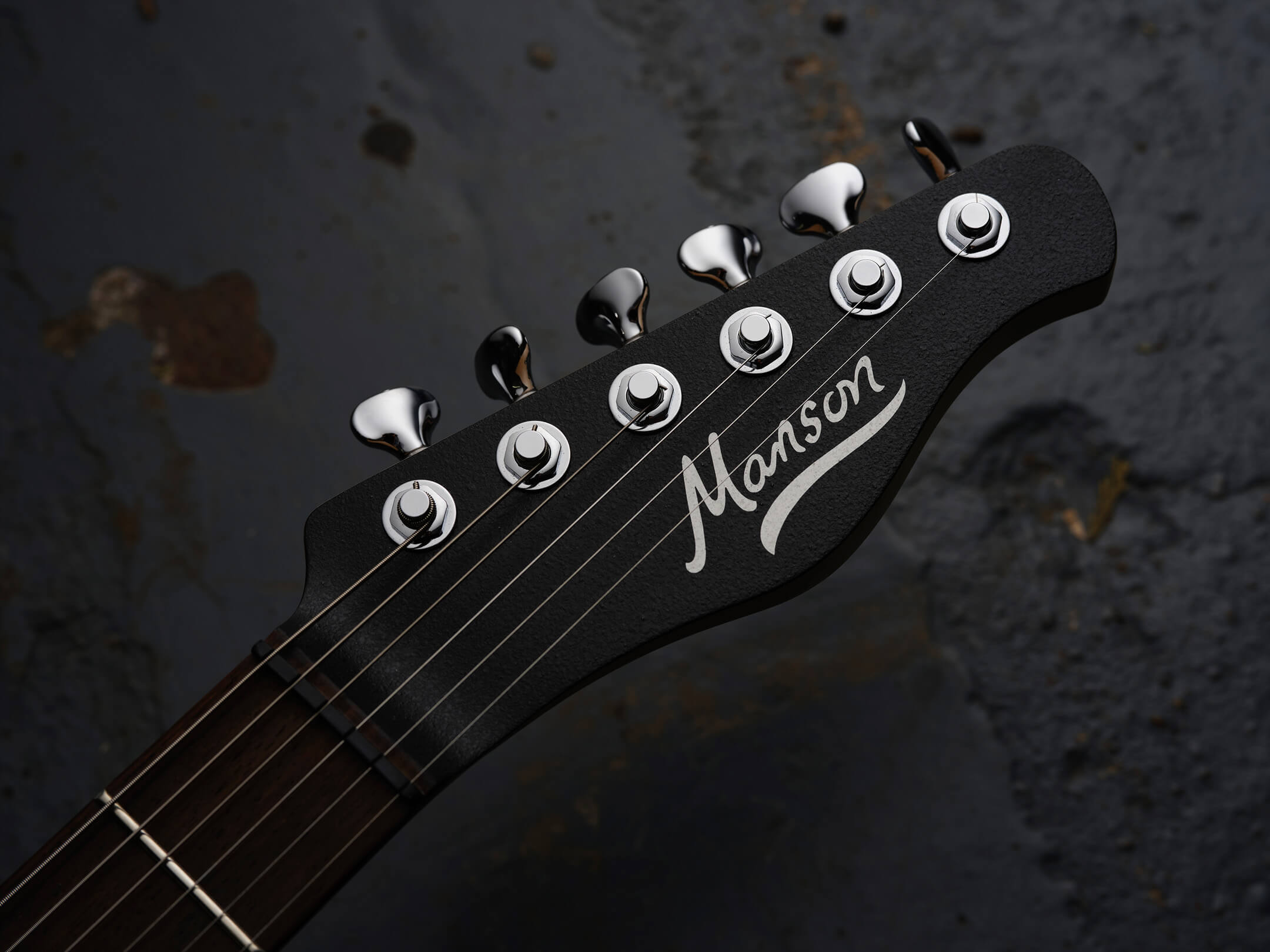 There is obviously a generous amount of gadgetry aboard the MB-2. But if you’re familiar with Spinal Tap’s Nigel Tufnel’s signature Music Man (designed with tongue firmly in cheek) you can probably see the difference between that and gimmickry. The electronics aboard the MB-2 are there purely to inspire creativity and when stuck in a rut, as we so often find ourselves, it could rescue you from creative famine and inspire new ways to write and play. That’s ultimately the reason many pick up the guitar in the first instance. Not many will be able to afford the £4k price tag but by the same token, try finding a guitar out there that has the same onboard electronics and a pedigree for making them shine. We wish you luck.