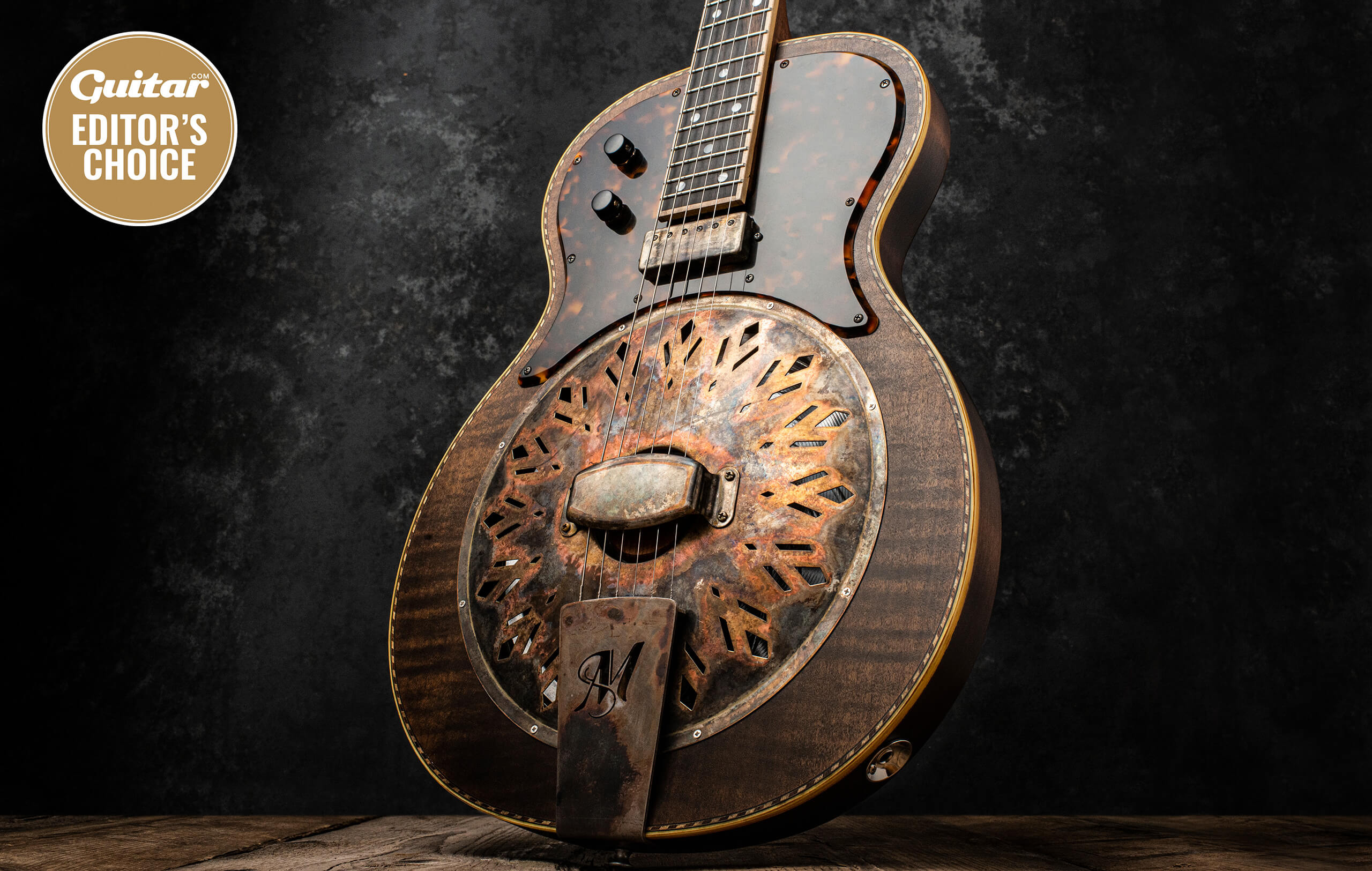 A little piece of magic handmade in Michigan that combines elements of resonator, solidbody and archtop design.

Our first encounter with a Mule Resophonic instrument came back in 2016 and, in the years since, the brand has gone from strength to strength. Helmed by former Huss & Dalton luthier Matt Eich and based in Saginaw, Michigan, the company’s waiting list continues to grow along with the rollcall of high-profile players who appreciate the raw charm of Eich’s creations. This includes Jeffrey Foucault, Jason Momoa, Celisse Henderson, Joey Landreth, Rebecca Lovell, Ariel Posen and Kristian Matsson (aka The Tallest Man On Earth), to name but a handful.

In addition to the resonators that started it all, the Mule catalogue also contains single and double-cutaway variations on the Mulecaster. These guitars feature Strat– and Tele-inspired outlines with hollow steel bodies and a 25-inch scale length that can be strung in standard or baritone tuning, and they come in a variety of powdercoat hues as well as Mule’s trademark distressed steel.

Early 2020 saw the birth of a new Mule model somewhere between the two poles of Matt’s existing electric and resonator designs. Christened Mavis, Eich describes it thusly: “It’s part archtop guitar, part electric guitar, part resonator. And something completely different to your ear. It’s awesome and it’s weird, it will push you. You’ll find something new.”

Available with or without cutaway, the Mavis uses roasted woods and combines solidbody construction with a resonator cone and a single humbucking pickup with master volume and tone controls.

The neck joins the body at the 13th fret and early versions of Mavis saw Matt utilise a Fender-style bolt-on arrangement with four screws and a plate at the rear, but now he attaches the neck screws from the front and covers them with pearl fingerboard dots.

This delivers the clean look of a set neck but means the neck can be removed much more easily should repairs be required further down the line. Somewhere, many years in the future, a weary luthier is thankful that they don’t have to drill holes and inject steam.

The neck itself utilises a scarf joint and stacked heel, which was a conscious decision on Matt’s part designed to minimise wastage. “Two-piece necks are cool but you almost waste as much wood in the blank as you use,” he says. “Even in the beginning when I was working by myself I would end up with all these big boxes of cutoffs that I was trying to keep, just in case I could use them for something. I ended up having to throw them away. It felt gross.”

Though it started life as a semi-hollow instrument before morphing into a solidbody design, the large amount of wood removed to allow installation of Mavis’ resonator cone means that the production version’s overall weight and balance is still akin to that of a thinline semi.

With a body depth of approximately 38mm at the edges, the back is carved from roasted pine based on geometry drawn up by Matt’s violin-maker friend Christopher Jacoby – a feature that Eich regards as a game-changer for the model.

The roasted maple top, meanwhile, has an attractive figure and is outlined by marquetry purfling and complemented beautifully by one of the best-looking pickguards we’ve seen in years, fashioned from 4mm thick Italian celluloid.

The neck profile is a cultured, soft-shouldered deep V/C hybrid that suits the guitar’s aesthetic as well as it sits in the hand, and the hand-rubbed oil finish feels damn near perfect.

Though it arrives strung with a wound G, the combination of 25” scale and 20-inch fingerboard radius make bluesy bends easy, while tuning is kept stable by a set of vintage-style three-on-a-plate machineheads whose design was the result of one of Matt’s first-ever CAD projects.

Before we even plug in, this guitar provides an amazingly fertile breeding ground for ideas. Acoustically, as you’d expect, Mavis provides a good deal more volume and resonance than the average unplugged electric and this makes it a fabulous couch guitar or accompaniment to a flat-top acoustic during a songwriting session.

Down at the cowboy end, there’s banjo-like plunkiness to the attack combined with a lengthy, mellow sustain. Single notes in higher registers are especially beautiful, with an ethereal halo of harmonics and reverberation. As cool as our review guitar looks, when you hear that high-end, it’s obvious why many players have opted for the cutaway version’s easier access.

Show Mavis a microphone and all this translates into something that sounds like you’ve blown the cobwebs off an ancient phonograph and are listening to a century-old blues recording.

It’s perfect for lo-fi intros and breakdowns or layering along with amplified takes. Indeed, when using the Mule in the studio, we’d recommend recording acoustic and amplified signals simultaneously to maximise blend options in the mix.

Plugged into an amplifier, it’s like that old record player has been replaced by an IMAX theatre as the sonic landscape erupts into technicolor. Situated relatively far back in the body, Mule’s low-wind Tomthumbucker is capable of both extraordinary depth and beautiful clarity.

A helping of that wonderful acoustic character finds its way through the wires, with fingerpicked folk parts sounding glorious and the B-string in particular providing a rich harmonic playground for slide lines.

It’s not all about Americana and roots music, though; Mavis is a guitar that would be as at home in the hands of a member of Radiohead as it would Dan Auerbach from The Black Keys, and the aforementioned combination of depth and clarity is a boon for contemporary adventures in ambience with sprawling effects chains.

And when we drop the low E string down to D and beyond, there’s a wonderfully loose and grungy low-end that loves dirt, while fuzzy powerchords have an enveloping warmth that makes us nostalgic for lo-fi indie rock records of the 1990s.

Over the years the great vocalists in rock and pop history have all had something in common: you believe them. They’ve all been able to deliver with an authenticity and intensity that moves audiences on some primal level, sometimes in a way that a technically superior performance cannot.

That’s not to say, of course, that all highly polished performances are inherently lacking in authenticity or that sloppiness can’t sometimes be embarrassing. But there are certainly parallels with guitar-making that are relevant here. 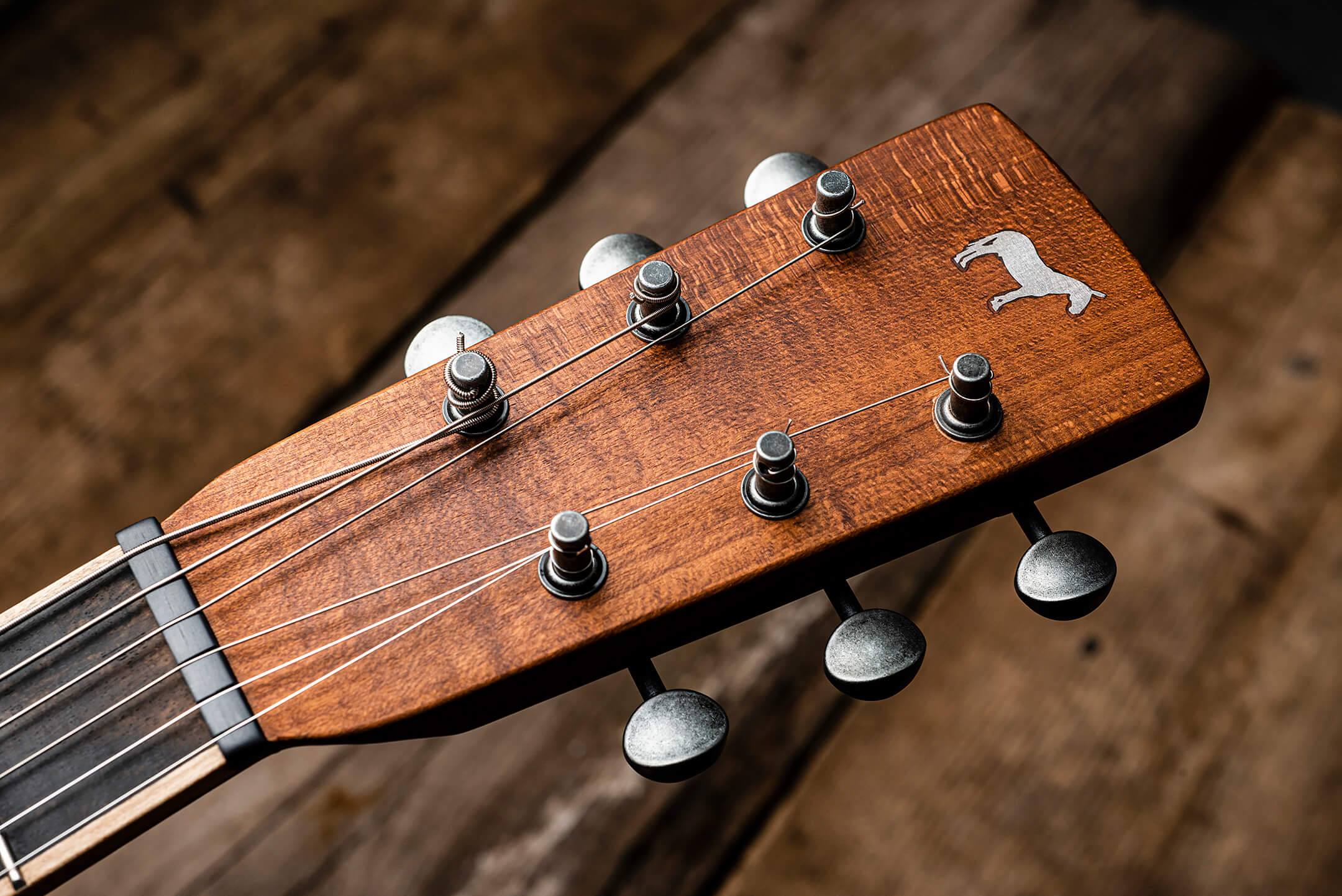 For myriad reasons, some instruments simply have X-factor and vibe to spare, and provide a wellspring of inspiration in a way that other extremely well-made, high-spec designs do not. The Mule Mavis falls squarely into the former category, and it feels like both a songwriting companion and the launchpad for hundreds of new ideas.

Inspiration is an intensely personal thing, of course, but the sheer number of artists gravitating towards this guitar suggests that on some objective level Matt Eich is doing an awful lot right.

At the moment it’s hard to get hold of any Mule models outside of North America and, at the time of writing, the waiting list on Mavis builds stands at 17 months. But if you can track one down, you won’t be disappointed. As a wise old guitar journalist once told us, “Buy the guitar that speaks to you.” This doesn’t just speak, it sings.