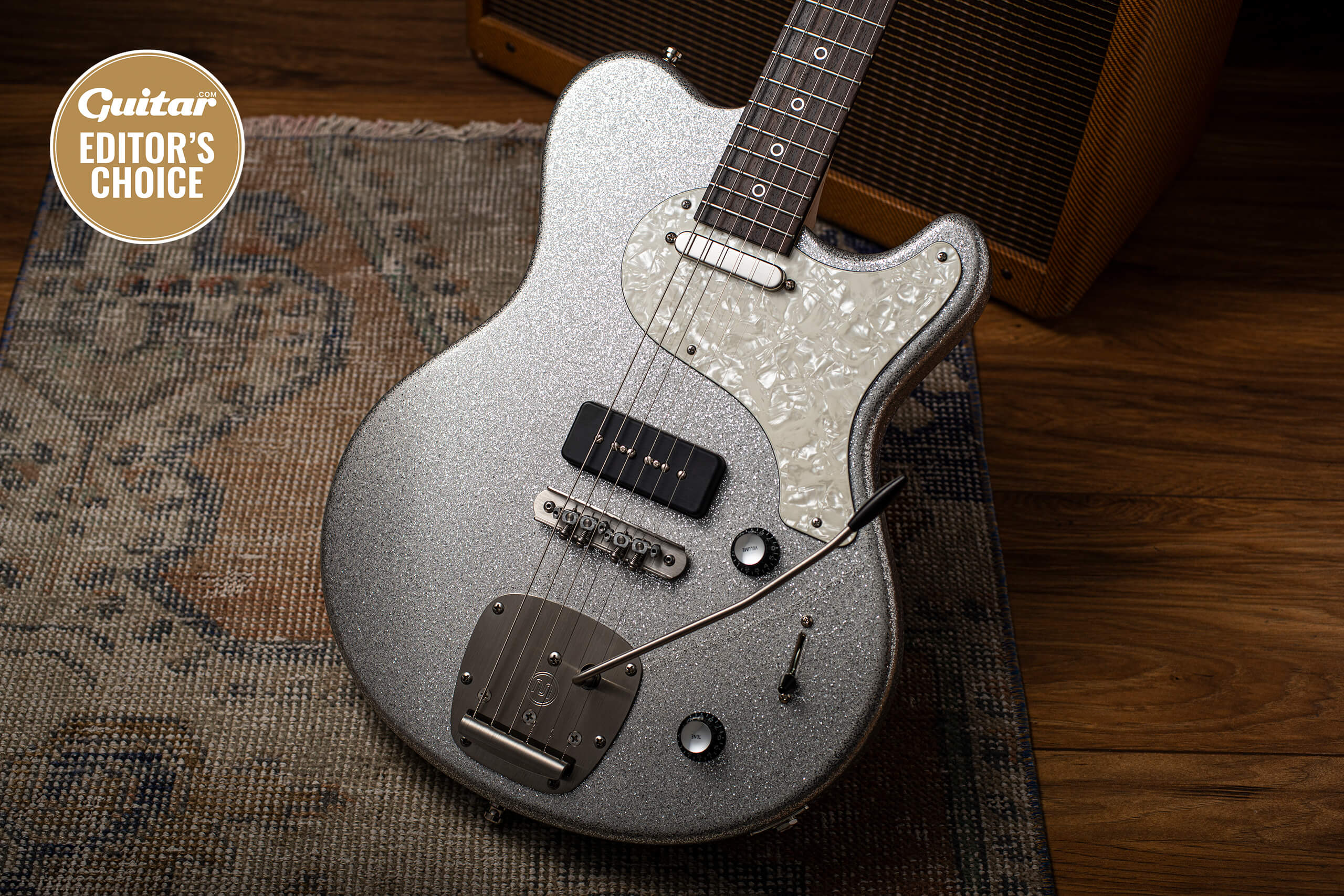 A sophisticated blend of offset, Telecaster and Les Paul Junior influences from a guitar maker at the peak of his powers.

Will the real Nik Huber please stand up? We’re joking, of course, but there really do seem to be two distinct sides to this German luthier’s guitar-building personality. On the one hand there’s the Orca and Rietbergen; exceptionally well built with extraordinary figured timbers, and unabashedly indebted to Huber’s former mentor Paul Reed Smith. On the other, there’s the Twangmeister and Krautster; designs in which Huber’s laser-like precision collides with a more road-ready, retro aesthetic.

Introduced with minimal fanfare at the NAMM Show in January, the Piet (pronounced ‘Pete’) falls firmly into the second category. Named after Huber’s youngest son and based around the existing Dolphin body shape, the Piet’s development was driven partly by the current offset trend but also by the luthier’s desire to push himself beyond the mahogany-style builds he’s best known for. Huber acknowledges that by combining a contoured alder body and bolt-on maple neck he isn’t exactly blazing a trail, but a year of sweating the small stuff led to an instrument that Nik and his team feel is all their own.

“With builders in the world already making phenomenal S-type, T-type and offset guitars, the last thing I wanted to do was make another, even if I do love those guitars. They have it covered,” says Huber. “But with many of these guitars from builders I admire, the things that make them beautiful and unique are in the details and the multitude of individual choices those builders take. I wanted that to be the case with this new model, which made it even more rewarding to see so many people checking out the Piet at NAMM and saying that it had our unmistakable signature, our DNA and feel.”

In recent years it’s been possible to throw a stone at a guitar show and watch it ricochet off the bodies of dozens of small-shop offset builds, but there’s definitely something different about the Piet. It doesn’t actually have an offset-waist body, for a start, but the generous edge radiusing and plunging contours lend this compact bolt-on a snug and approachable feel, and the strapped-on balance is superb. 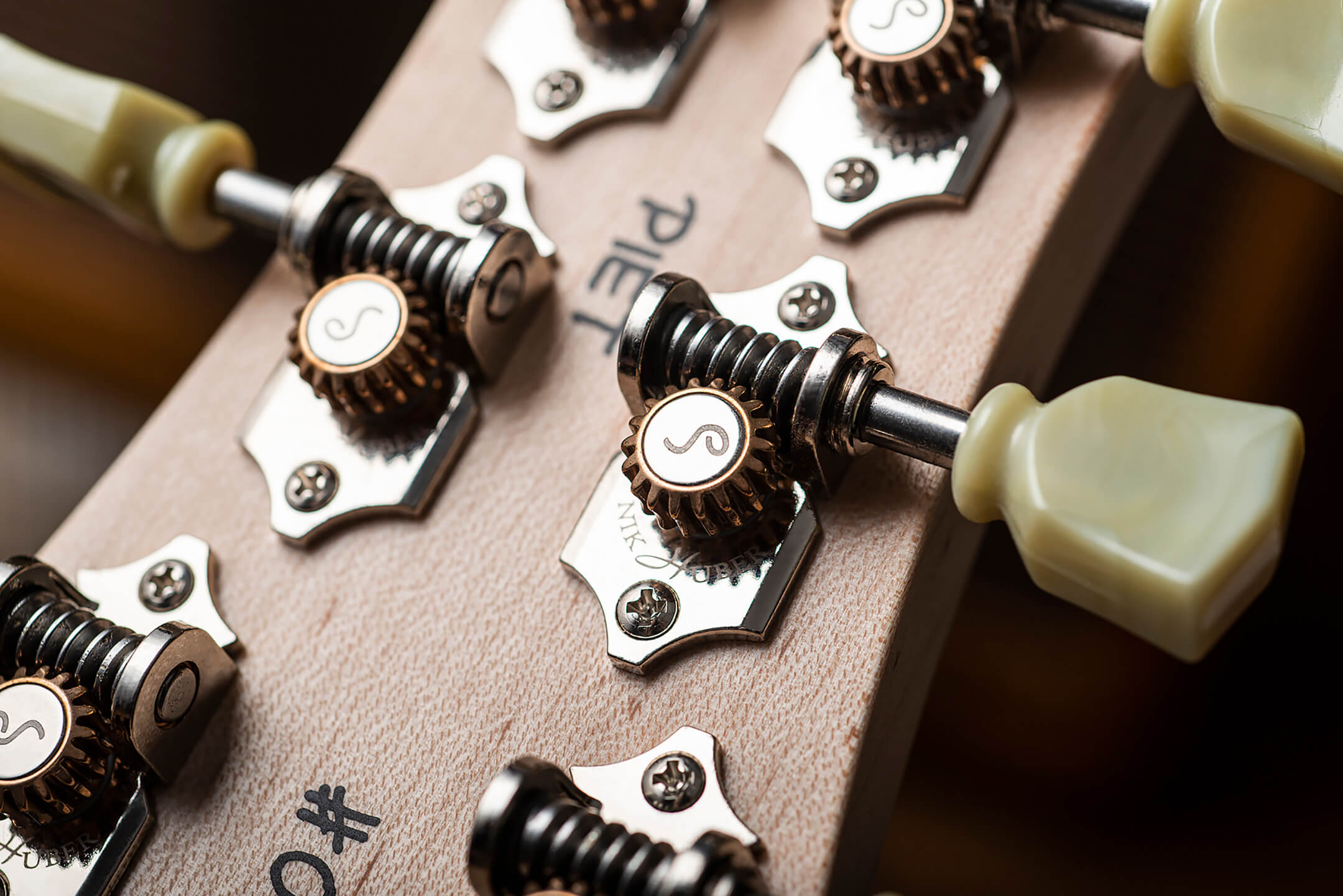 Though our review guitar’s combination of a high-gloss polyurethane Silver Sparkle finish and pearloid scratchplate might not be for everyone, one of the major benefits of buying boutique is that, if your wallet stretches to it, you have much greater choice when it comes to specifications and aesthetics. The base Piet model is approximately £2,712 (€2,995) and comes with a wrapover hardtail as standard. One of the substantial upgrades here is the Mastery Offset Bridge and Vibrato, which adds an extra £602/€665 to the purchase price thanks to the cost of the hardware and the more labour-intensive build.

The pickups in our review model are German-made Häussel units featuring alnico V magnets and comprise Harry Häussel’s standard 1956 Soapbar P-90 in the bridge position, and a scratchplate-mounted Broad unit at the neck. Again, other options are available, but the tasty pairing here promises plenty of versatility.

As we’ve come to expect from Huber’s workshop, the Piet’s build is exquisite and, aside from the tone knob’s skirt almost touching the surface of the guitar’s body, there’s nothing to fault here. The wiring is immaculate inside the shielded control cavity, where 500k CTS pots are joined by a TAD 0.022mfd ‘orange drop’ tone cap and a treble bleed on the volume control.

The satin nitro-finished American maple neck appears almost stark by Huber’s usual heavily figured standards, but you can specify a vintage neck tint for an extra £237/€265 if you find the boxfresh look a little pale. Although it’s a bolt-on design, the neck carve has the depth and soft shoulders of an early Les Paul. But unlike a 1950s Gibson, the Piet’s compound 10-14 inch fingerboard radius and almost sculptural heel carve combine to facilitate whole-tone 22nd fret bends without the need to break a sweat.

Our personal preference would be for a more generous roll on the edges of the East Indian rosewood fingerboard, but there are certainly no rough areas or sharp fret ends to be found. The 6105-style fretwire was installed with invisible tangs, and the sterling-silver ring inlays are as flawless as they are classy.

The Piet’s acoustic response is interesting; it’s almost like a thinline offset running through a compressor. There’s a lively attack but more sustain than you’d expect, with no shortage of harmonic interest. Once the strings are stretched in, the vibrato operates beautifully, returning to pitch despite some pretty extreme bends. The Huber-branded Schaller 18:1 tuners are a great choice too – despite their vintage-style appearance, they operate smoothly and are sensitive to fine adjustments.

We set our Lazy J combo to the point where chiming clean tones give way to a classic rock roar when you dig in hard, and the Piet certainly doesn’t disappoint. The balance between all three core tones is even in terms of output and frequency range, so there’s no danger of dialling in that perfect bridge tone only to flip across to the neck pickup and feel the need to adjust your amp.

Did we mention perfect bridge pickup tones? The pickguard outline isn’t the only thing this guitar has in common with a Les Paul Junior. The bridge P-90 has enough guts and grind for legs-akimbo 1970s rock riffing but it also offers sufficient clarity and separation for pedal notes to ring out in Foo Fighters-style chord progressions.

The crowd-pleasers on the setlist for your next gig at the local are covered, then, but before you touch that three-way switch, judicious use of the volume and tone controls can summon up many more subtle textures. Indeed, we find ourselves riding the tone control a lot more than usual as there are so many interesting voices to unlock.

Every picking hand nuance is captured in detail by the Häussel P-90 and spacious lead explorations are only enhanced by the lengthy sections of string between the Mastery bridge and tailpiece. It’s much like the way an old ladder-braced parlour acoustic gives the impression of having its own built-in spectral reverb; all those overtones might just make your regular hardtail electric sound, well, a little bland in comparison.

Switching to the middle setting proves no less beguiling. This is where the Piet is at its most ‘offset’ in tone, and greying teenagers of the 1990s will delight in busting out their best Sonic Youth moves – albeit on a guitar that we’d wager provides a somewhat smoother and more stable ride than the anything in Thurston Moore and Lee Ranaldo’s road cases back in the day.

Crucially though, at no point does the Piet feel too polite to drag into murky waters, or too refined to hit hard. In fact, the quality of the build is such that it’ll stand up to the most punishing of tasks, seemingly regardless of how aggressive or percussive your right-hand attack is. 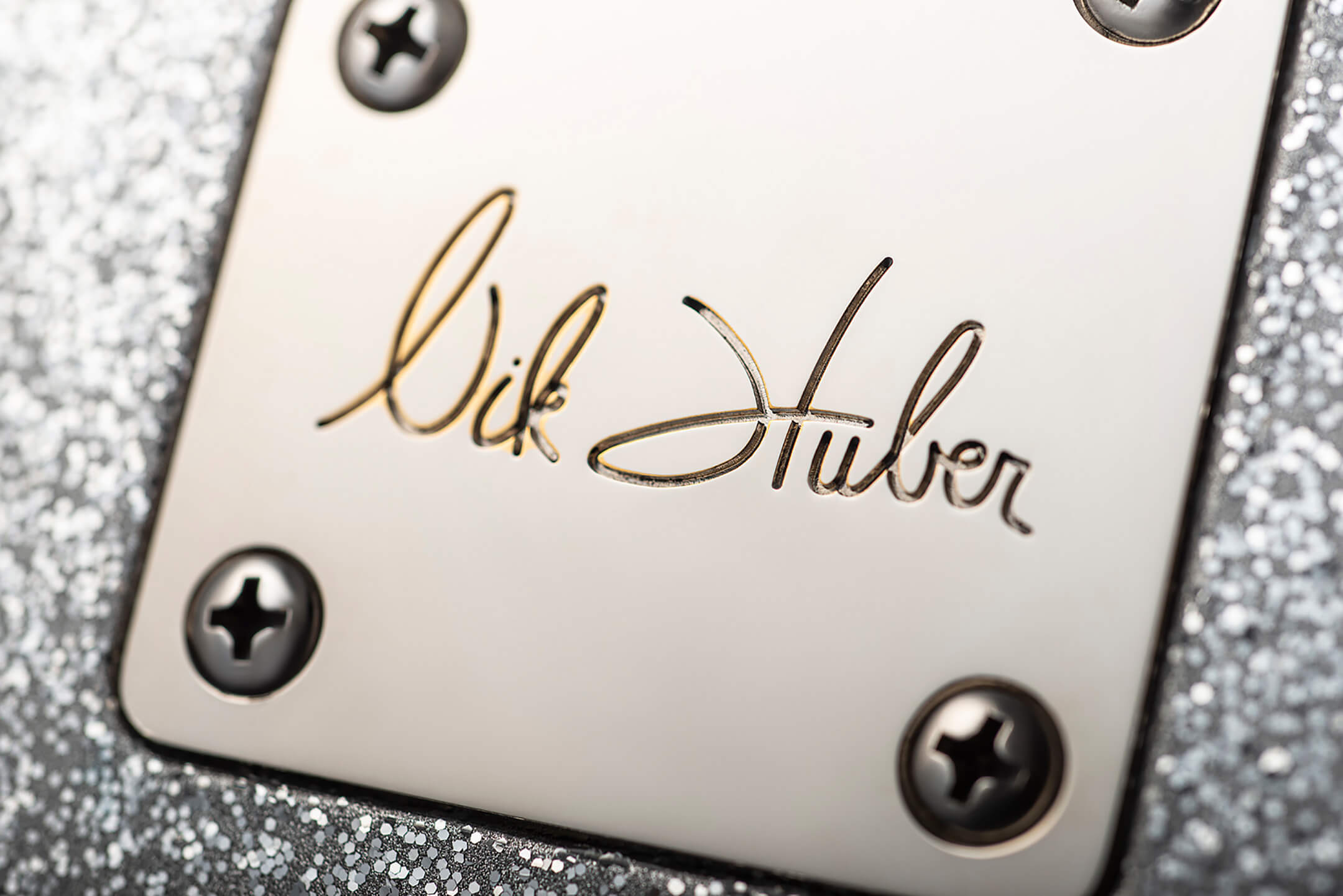 If you favour a more sophisticated approach, the neck pickup provides – from astral Hendrix and Gilmour-style excursions to haunting Radiohead arpeggios, expressive big-bottle blues, piano-like first position chords… we could go on. And everything we love about the usability of the full range of the volume and tone controls in conjunction with the bridge pickup applies equally here too.

Although the Piet falls into the more accessible end of the Nik Huber catalogue, there’s no denying it represents a considerable investment. However, this is a special electric guitar that proves character and mojo can coexist with precision and an eye for detail. Sure, there’s plenty of competition in a boutique market saturated with Mastery-equipped, offset-influenced designs. But you won’t find many as enthralling or as well-conceived as this. 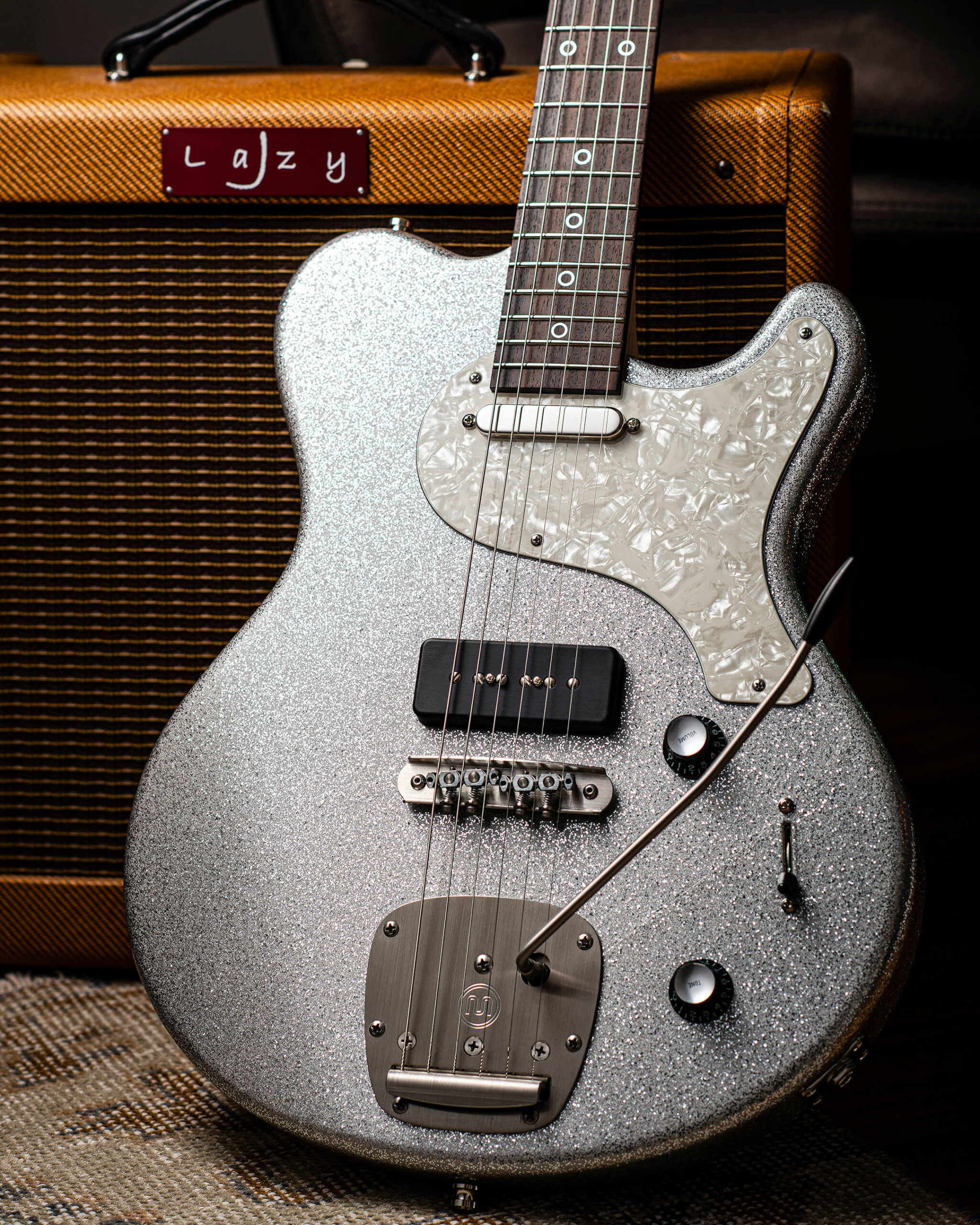