It might sound like the name of a CBeebies show that never really caught on, but Oopegg is a name to take seriously – and if the price at the bottom of this review doesn’t convince you of that, read on for a whole bunch of other reasons.

In a sense, the Trailbreaker Mark-I is a mashup of two very different eras in Japanese guitar-making history: the quirky original designs of the 60s (think Teisco) and the high-quality Fender and Gibson copies of the late 70s and early 80s (think Tokai). Is this the best of both worlds, then? 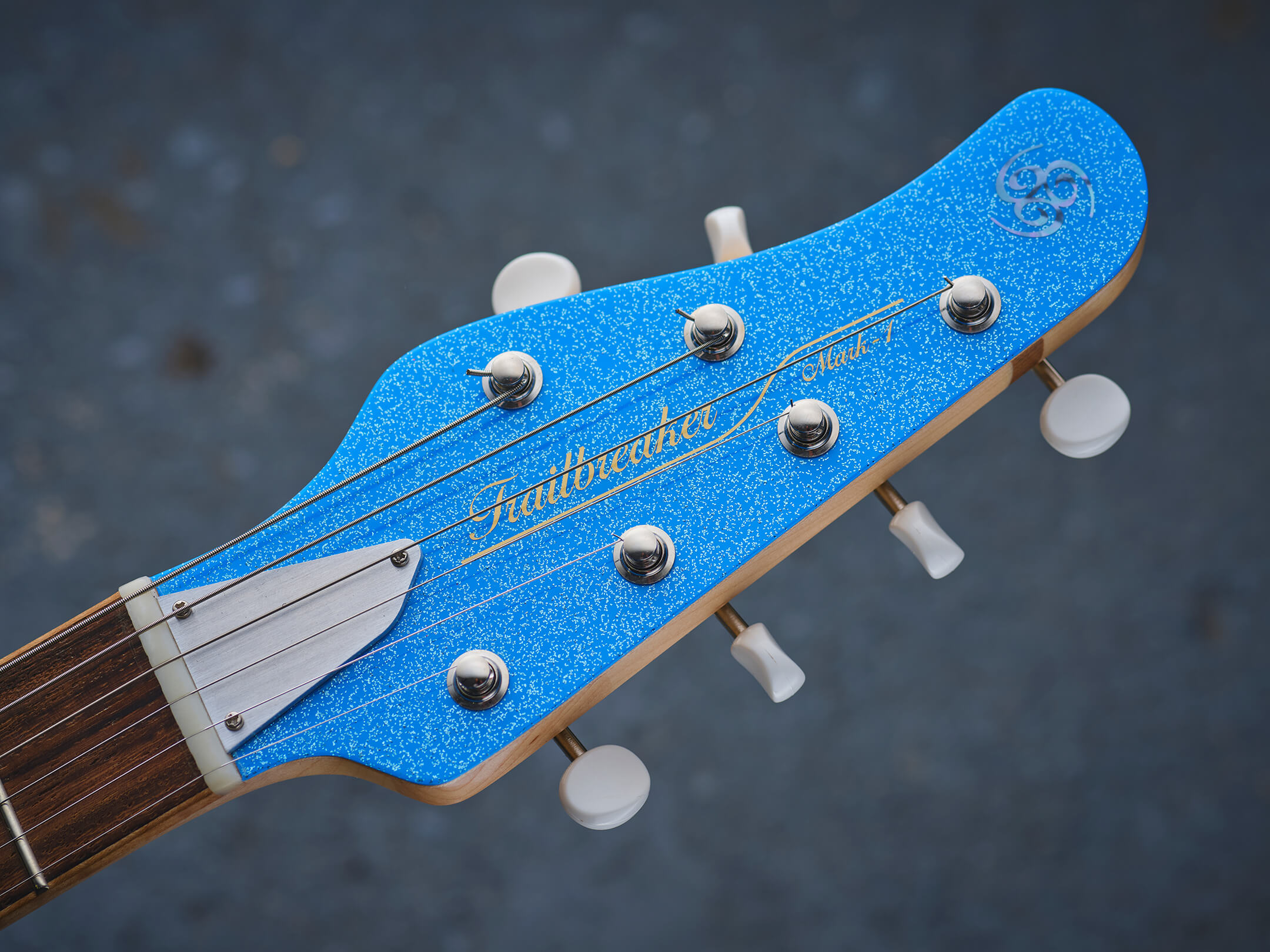 Let’s tackle the ‘quirky’ half of the equation first. Well, you can hardly avoid it: the offset-waist body shape manages to be both pointy and blobby at the same time, and is matched by an elongated headstock with only the low E and A tuners on the top side. Add to that an HSH pickup configuration with a mysterious toggle switch and you know you’re dealing with something a little off the wall.

We should also mention the colour, one of many on offer from sole UK dealer Andertons: a summery blue that would be lurid even without the metallic sparkles. The headstock matches… and if you want to be dazzled even with the lights out, there are luminous fret markers along the top side of the neck. 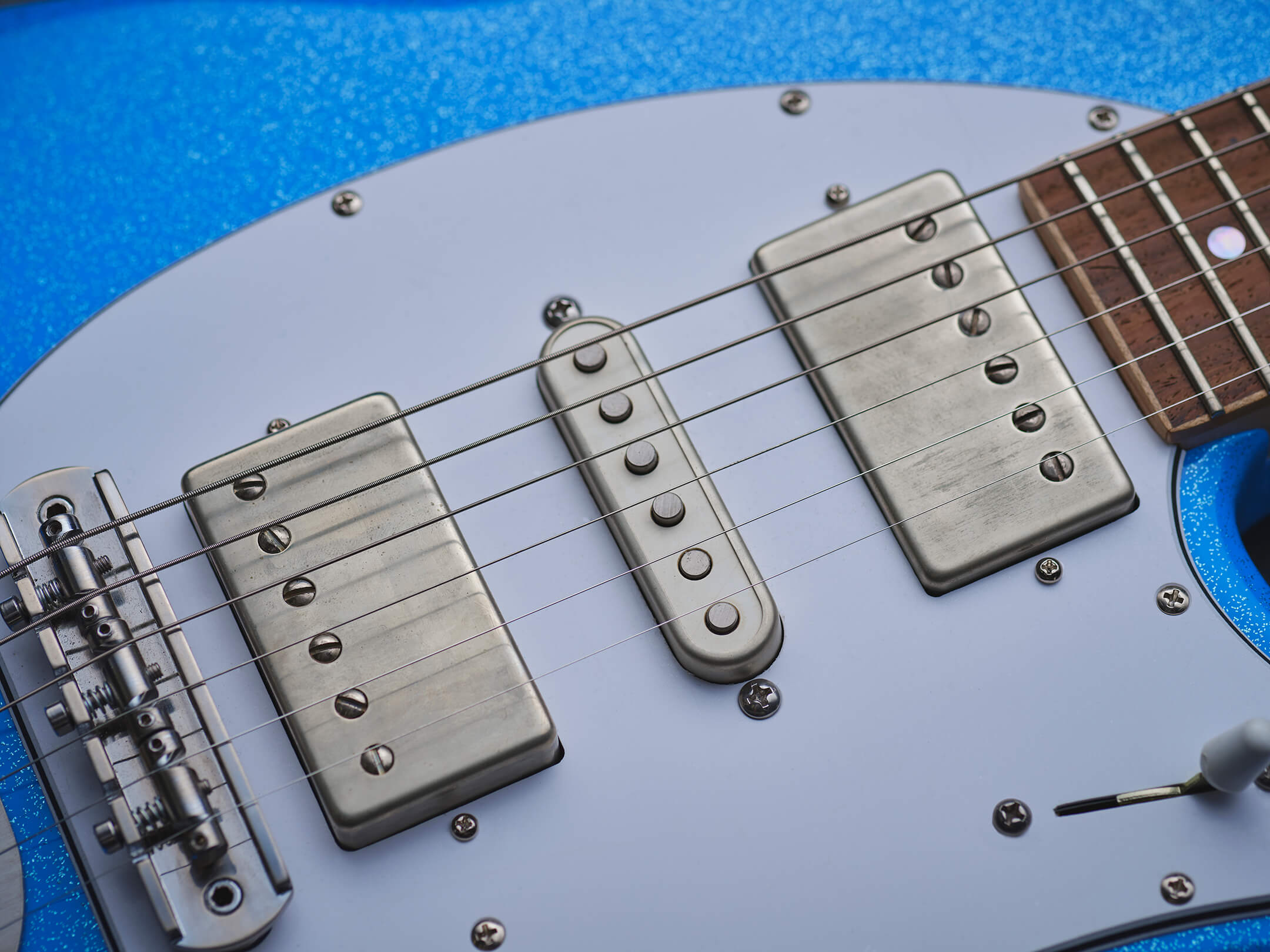 But what’s going on beyond the eye-catching looks? Well, it’s an alder-bodied guitar with a five-ply maple and walnut neck, the walnut appearing as a couple of tidy pinstripes. There’s a subtle faux-binding on the neck, and a contoured heel with one screw mounted in the lower corner and the other three on a triangular plate.

Hardware-wise we’re looking at a Descendant tailpiece, very much this season’s must-have vibrato among the American boutique crowd, working in tandem with a Greek-made Halon bridge that rocks in sympathy with the arm (but only a little bit). A set of Japan’s own Gotoh locking tuners completes the globe-spanning metalwork order – and that brings us to the all-important electrics. 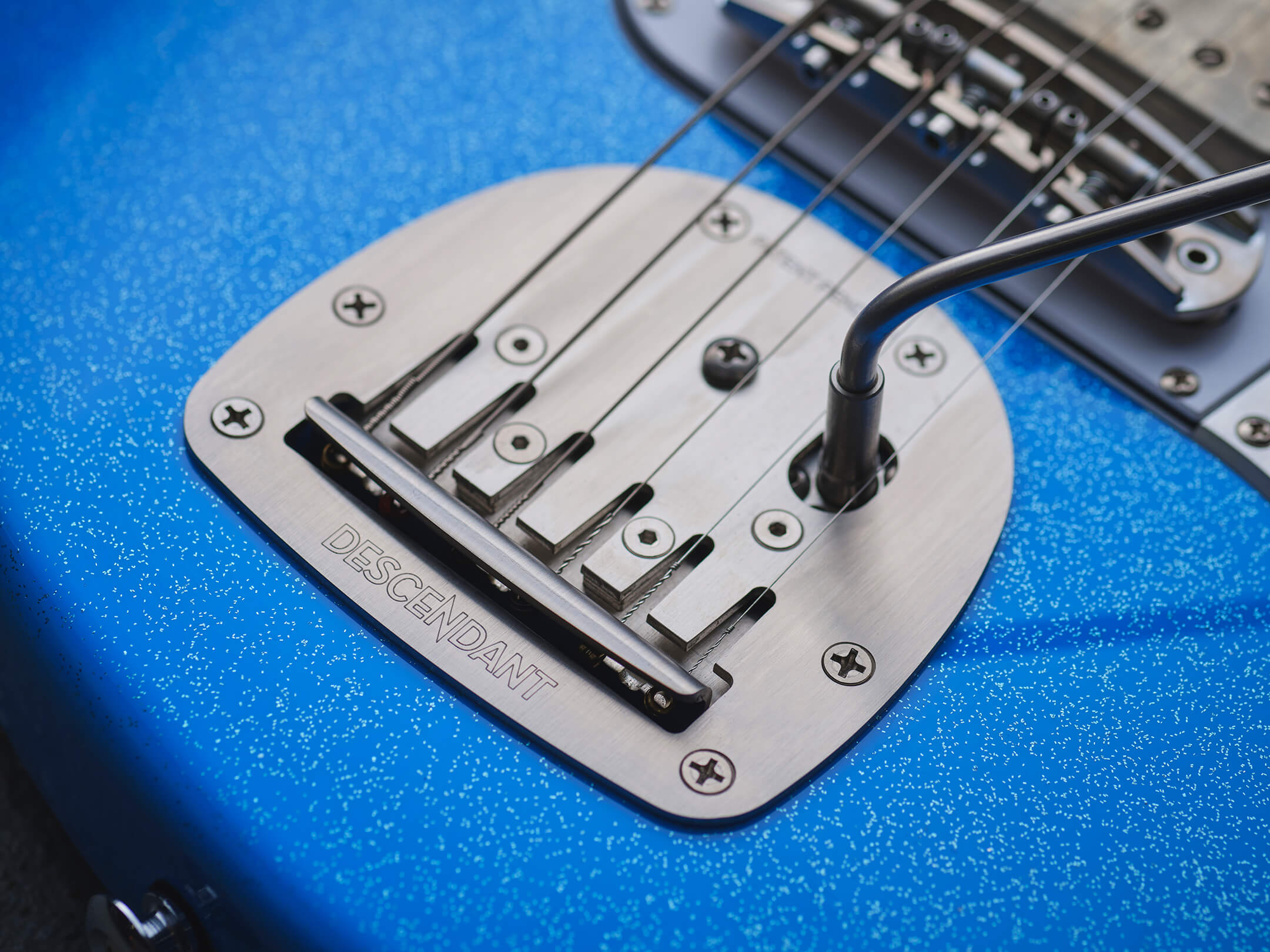 The pickups themselves are made by Magneto, a relatively unknown company based in the Blue Ridge Mountains of North Carolina, and consist of two vintage-voiced humbuckers plus a cheeky single-coil in the middle. But it’s the way they’re wired that’s interesting.

The main switch is a three-way blade for the humbuckers, offering the standard neck/both/bridge options, while the little toggle by the output socket controls the single-coil: with this one set to the front you get the single on its own, in the middle position it’s blended with whatever the ’buckers are doing, and flipped to the back it’s taken out of the circuit.

It hardly needs saying that this takes a bit of getting used to, but basically you’re using a pair of three-way switches to engage any possible combination of one, two or three pickups. It’s actually quite a smart system, and a lot more elegant than some of the switching solutions used by those zany 60s Teiscos. 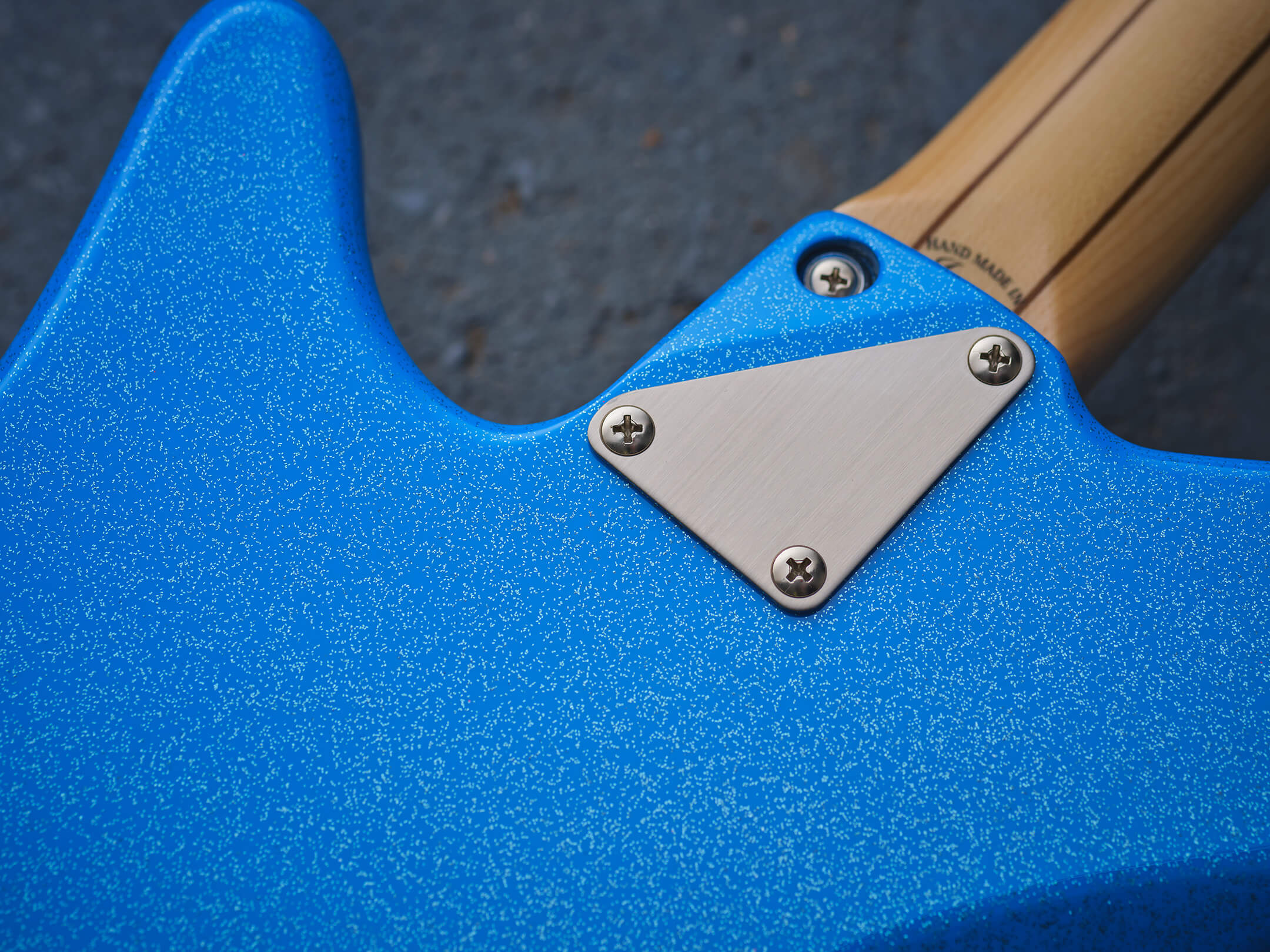 Good news: the Trailbreaker Mark-I doesn’t feel as gangly as it looks. That’s partly because there’s a lot less timber behind the bridge than you’ll find on a Jazzmaster, and partly because of its Gibson-like 24.75” scale length. The result is a guitar that sits snugly on the lap or strap with a pleasing sense of compactness.

And then we start playing. Acoustically, there’s not much to report: offsets are often less than super-resonant because of that wonderfully inefficient bridge design, and our Oopegg is in no hurry to buck that trend. What is noticeable, though, is how downright nice it feels to play. 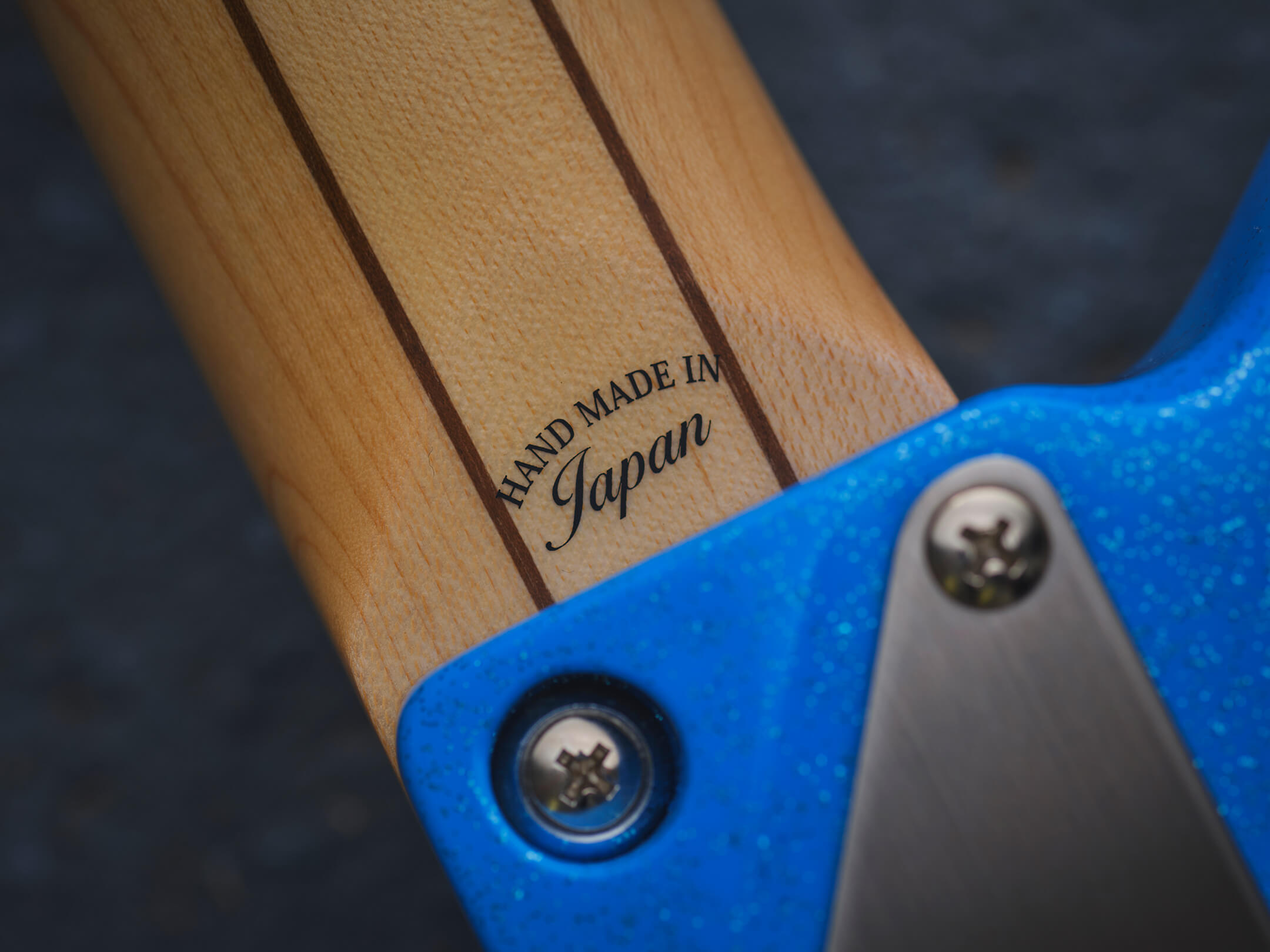 The satin-finished neck is described as a modern D and that’s just how it feels, with lightly rolled edges, neat fret ends, a well-cut nut and a low factory action combining to create an effortlessly slick left-hand experience all the way from the first fret to the (reasonably accessible) 22nd.

In ‘humbuckers only’ mode, that smoothness extends to the tones flowing out of our amp. Mixing vintage-voiced ’buckers with a 24.75” scale is taking us dangerously close to Les Paul or SG territory, and there’s certainly no sign here of the shrillness that offset-phobes are always moaning about. The neck pickup might even be too dark for some, though there’s no shortage of raspy spank from the bridge unit or twinkly richness in the middle position. 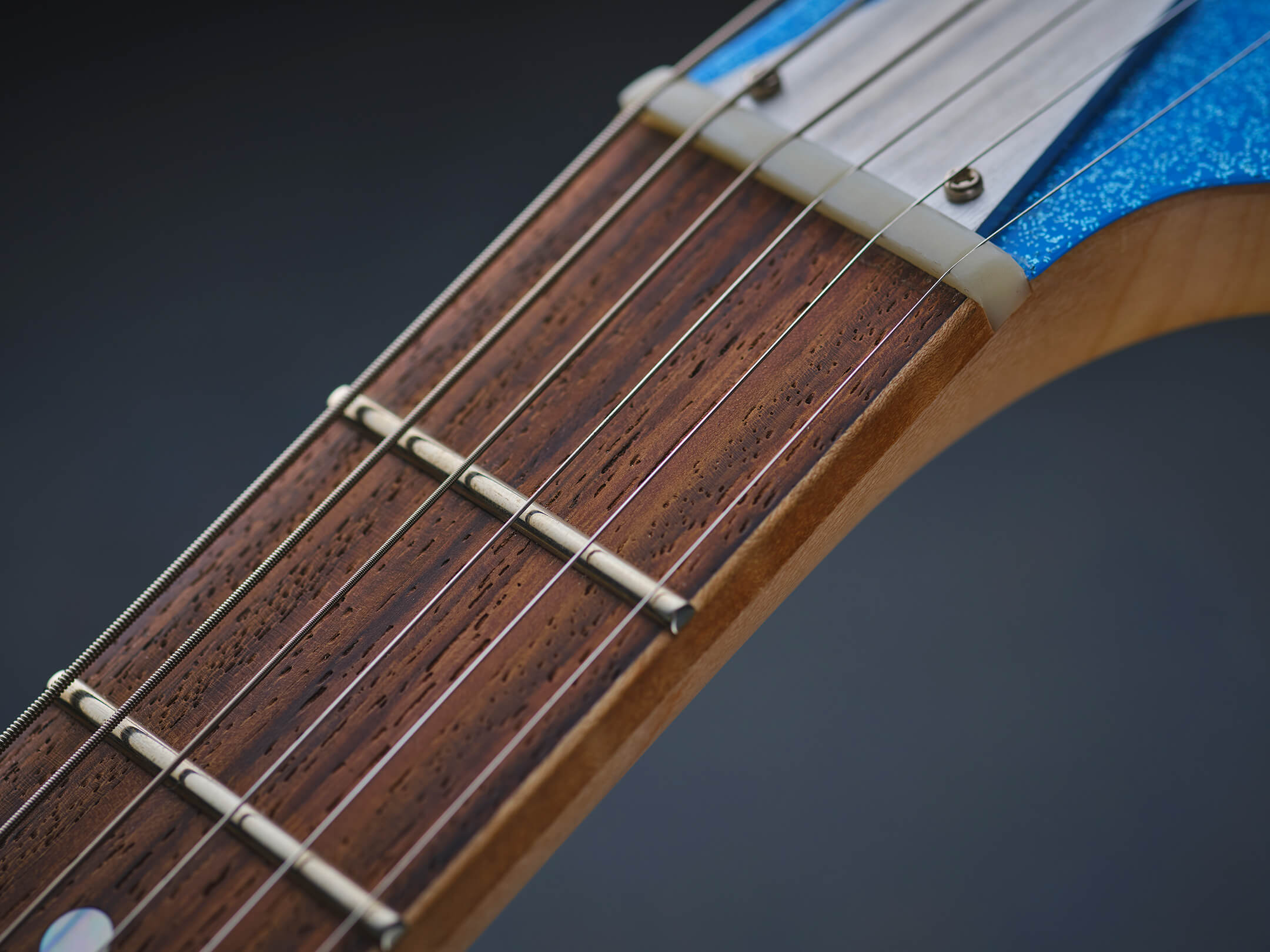 Now we flip that stubby little toggle to add the single-coil to all three of those settings, and the most obvious difference is that everything is suddenly a touch more soft and subdued. Naturally we’re heading into the realms of Strat-style quack here, but the wide profile of the humbuckers ensures this isn’t too pronounced. Clean tones are still super-smooth in all three positions, though there’s so much phase-cancelling going on in the middle setting that it ends up a bit vague and murky.

With the toggle switch pointing forwards, the blade selector is bypassed and we’re now playing a one-pickup guitar. This feels, more or less, like exploring the middle pickup of a really good Stratocaster: played clean it’s nicely balanced with no wiriness, just a smidgeon of phasey character; pumped through an overdriven Marshall it’s pure 70s rock. 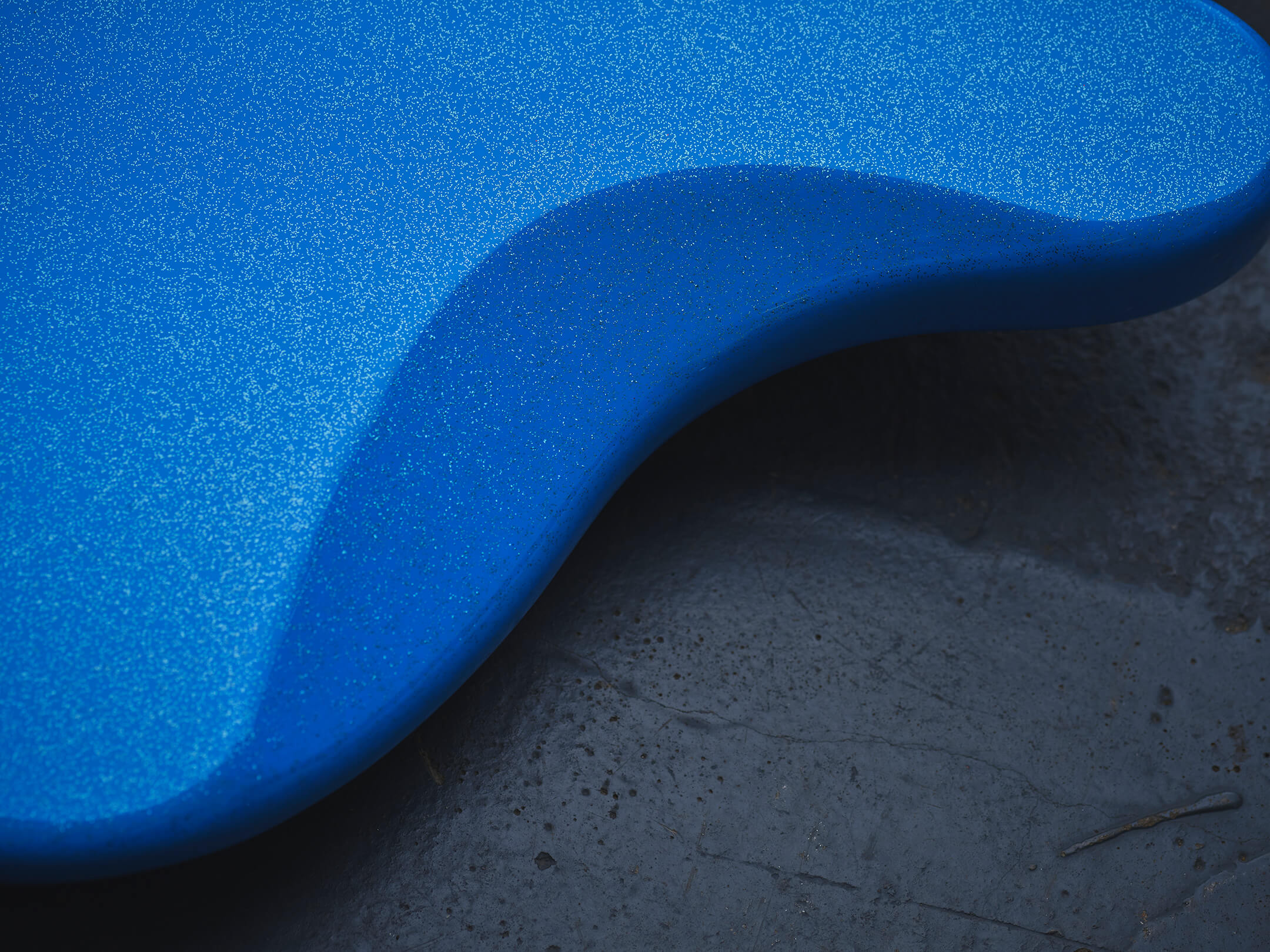 The Descendant behaves impeccably through all of this. It’s been set up with fairly high tension, meaning the arm takes a bit of a push to get it moving – unlike some Jazzmaster whammies, you can’t set it a-wobble just by giving it a stern look – and it whumps back up to pitch with Strat-like solidity. Some players will be very happy with this; others might want to invest five seconds in loosening the spring for a more immediate response.

We were expecting the Oopegg Trailbreaker Mark-I to cover a lot of ground and it does, borrowing freely from both the Fender and Gibson aisles of the ‘classic guitar styles’ library. The result is a beautifully made instrument that can truly be called an all-rounder. About the only thing it can’t do, in fact, is sound like an offset.