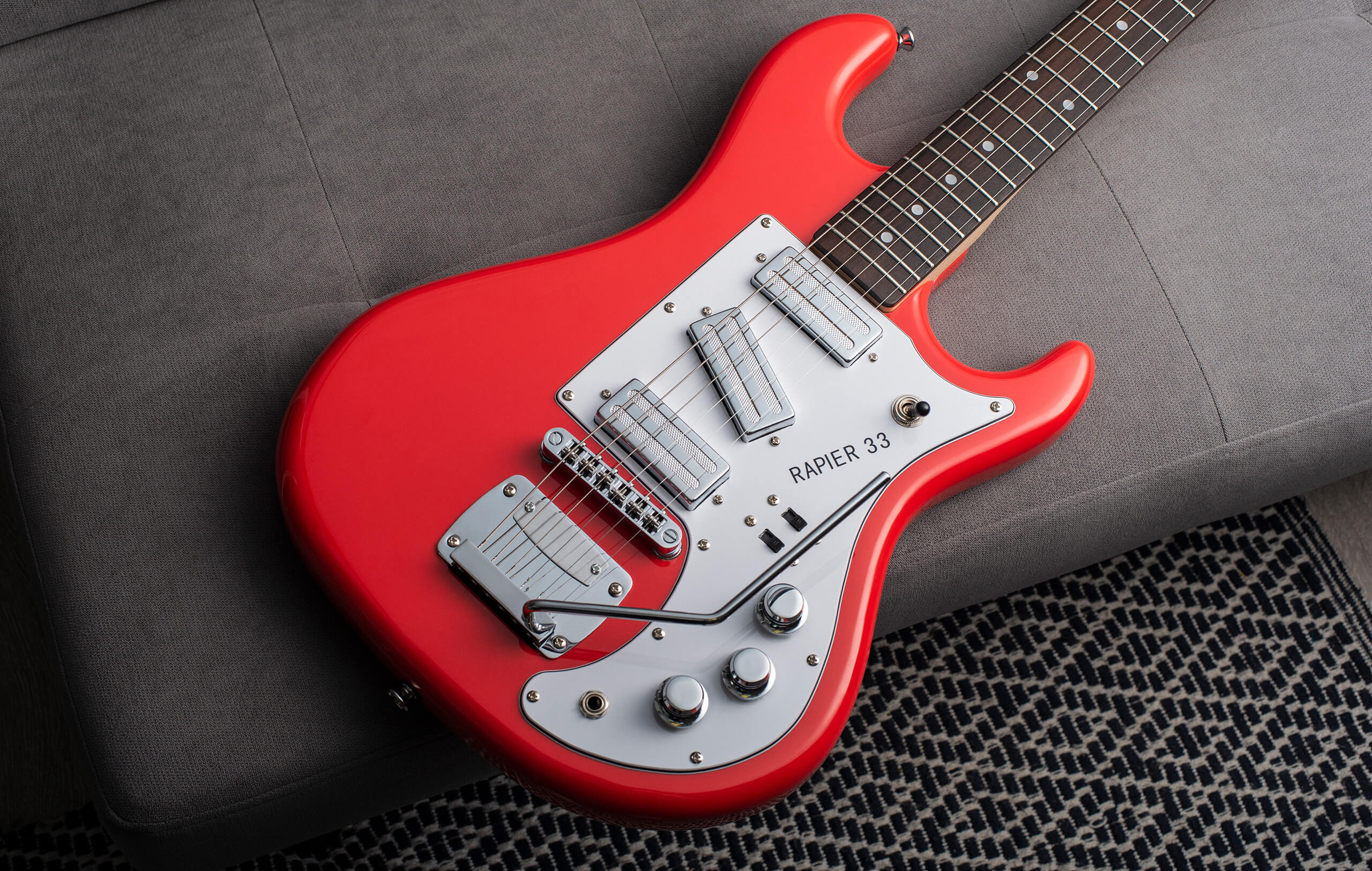 The Big Review: The Rapier 33 breathes new life into a cult classic

The nostalgia-driven purchase of a vintage Watkins guitar inspired designer Alan Entwistle to create a new version for modern players. But can the Rapier 33 cut it?

Throughout the early years of rock ’n’ roll, American electric guitars were almost impossible to get hold of in the UK. The 1959 Fender Stratocaster that Cliff Richard imported for Hank Marvin was supposedly the first to reach UK shores but any aspiring British guitarist of the period was far more likely to be playing a Dallas Tuxedo, a Höfner, or a Watkins Rapier.

Guitar designer Alan Entwistle (formerly of Burns, Jansen, Tanglewood and others) was one of them, having bought his Rapier from Tower Music in Blackpool in 1965. Alan recently acquired another, and after restoring it, he rediscovered how good they can be. He decided to design a reissue model and, after posting a photograph of one of the prototypes on his Facebook page, was delighted with the response.

Our review guitar isn’t an exact replica of the original Watkins and it doesn’t wear that brand name, but it’s very much ‘in the spirit of’ and, from a playing perspective, few will miss the quirky controls, vintage tuners and non-intonatable bridge. You may also notice that the knob layout has been subtly altered and the headstock is both shorter and less curvy. It doesn’t have Watkins’ shallow back angle, so Alan has used a pair of string trees instead. 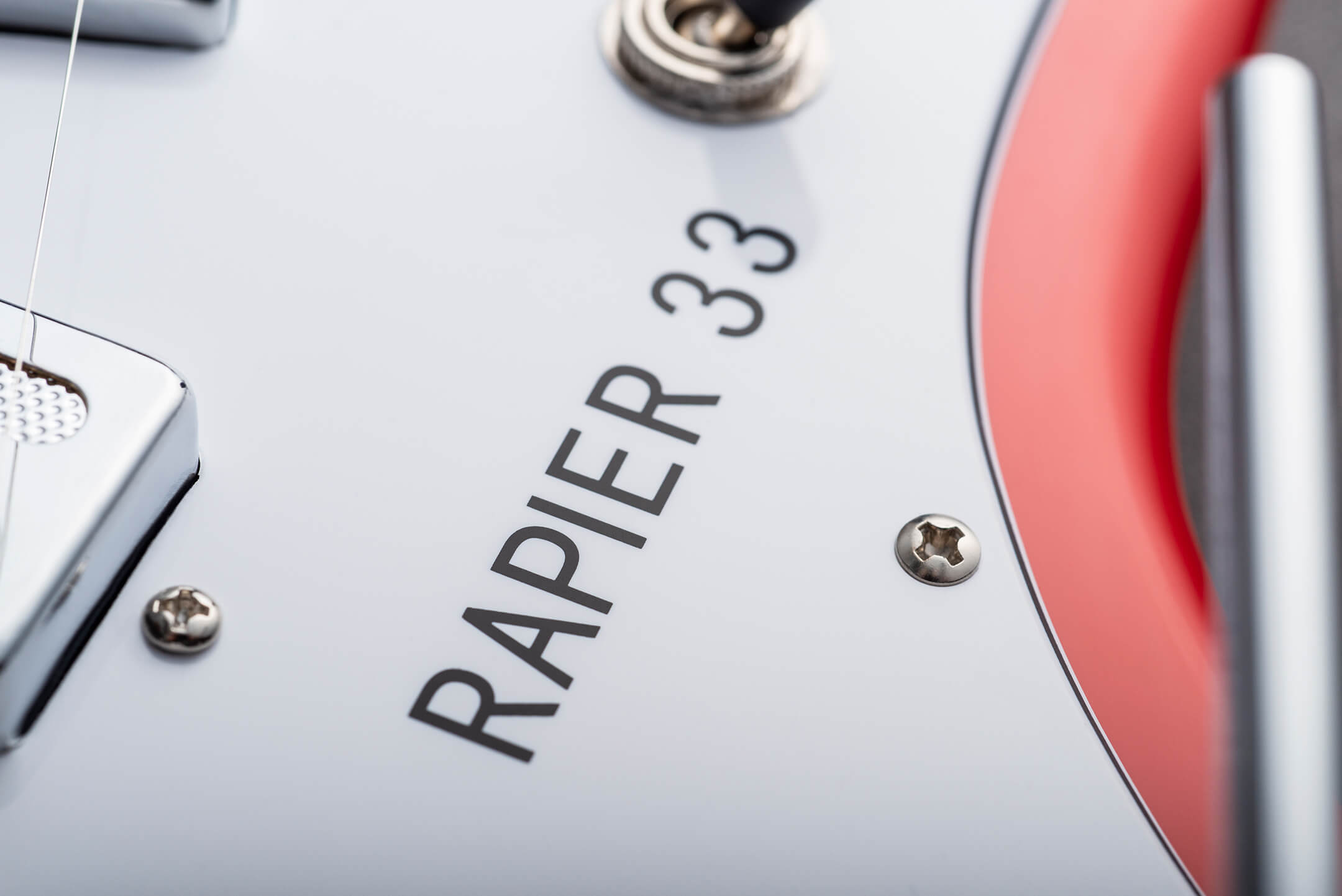 According to Alan, the original pickups had five rather than six magnets, with a magnetic baseplate much like a Burns Tri-Sonic. He also discovered that the second magnet from the top was reverse-polarity, which made the top three strings sound slightly nasal and out of phase. The bass strings were slightly overpowering too, so after much experimentation, it was decided to install low-wind dual blade humbuckers that look very similar to Watkins’ mid-to-late 1960s toaster pickups.

Some elements of the original control wiring have been retained – although Watkins frequently changed things. In contrast, the Hi Lo vibrato assembly continued unchanged throughout the Rapier’s production and Alan and his team have faithfully recreated it. Alan also stresses that the vibrato contributes considerably to the Rapier’s distinct tone and sustain characteristics, but here it’s combined with a modern bridge featuring roller saddles adjustable for intonation. 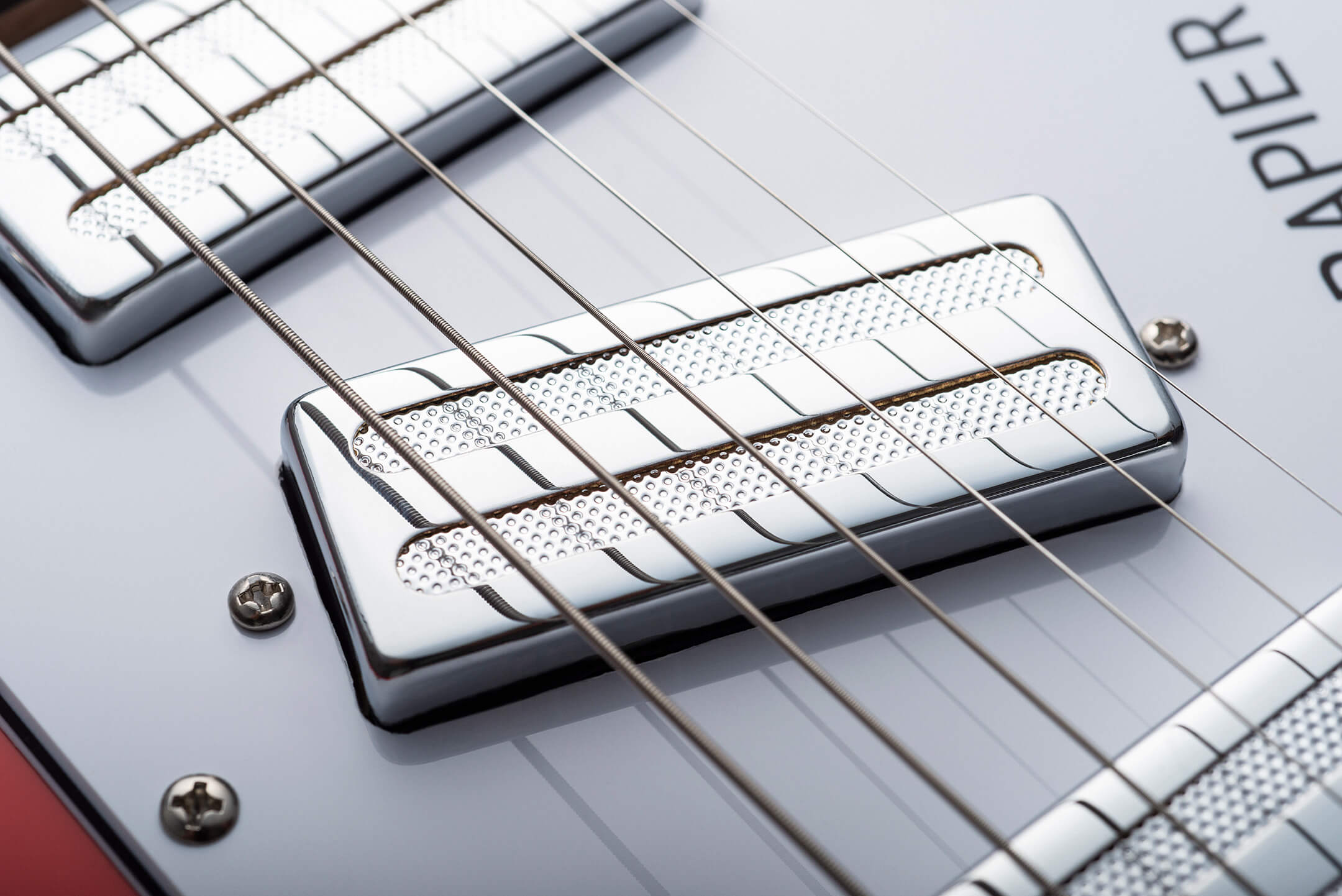 Watkins introduced truss rods around 1966 and Alan has wisely followed suit. However, maple is preferred to sycamore for the neck and the body is made from the mahogany-like African tonewood okoume. The body thickness has been increased by about 5mm for structural stability and Alan has chosen bolt-on neck attachment rather than the earlier set-neck method. 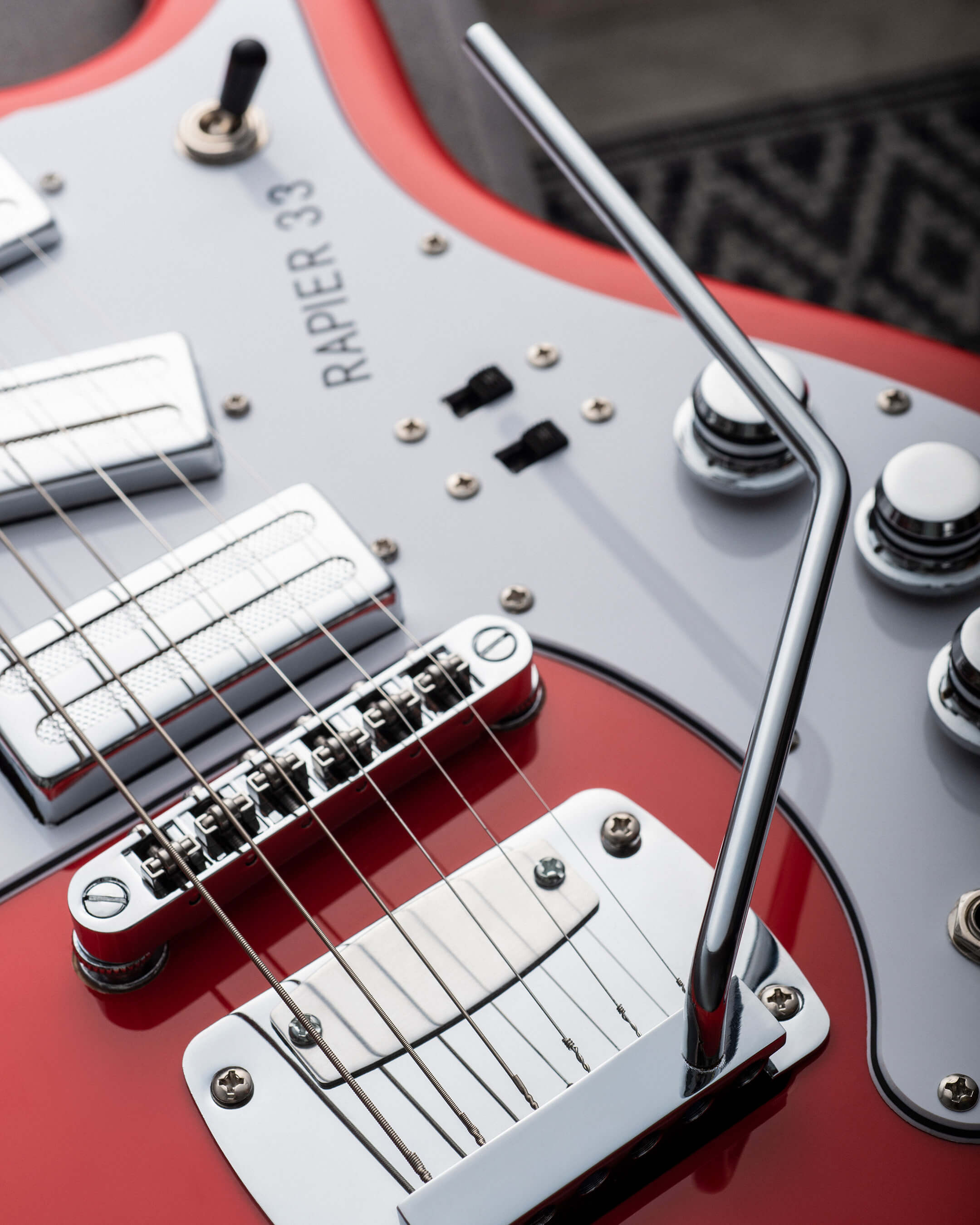 Many years ago, this writer overheard a band rehearsing in a village hall and wandered in to check them out. The guitarist was using his dad’s old Watkins Rapier and Vox AC30, and he kindly let me have a go. The guitar was far better than expected, but since it’s the only Rapier I’ve ever played, this won’t be a vintage versus modern critique. We do, however, have 1960s Vox and Watkins amps on hand for testing.

Despite its overwhelmingly vintage vibe, the Rapier 33 feels and plays like a modern guitar. The neck has a comfortable full C profile, the action is low and the fretwork is very good. If you’re unfamiliar with zero frets, consider how much easier most guitars play with a capo and you’ll get why this vintage feature makes sense. Within no time you’ll forget it’s there, which is more than can be said about the sharp cornered Graph Tech nut sitting behind it.

The unplugged tone is nicely balanced, with a pleasing brightness, a hint of hollowness and plenty of sustain. Approaching the vintage-style vibrato with some apprehension, we’re pleased to find it operates smoothly and tuning is reasonably stable. It feels a bit light, but the Rapier ships with an extra spring that will presumably stiffen the response if you prefer. 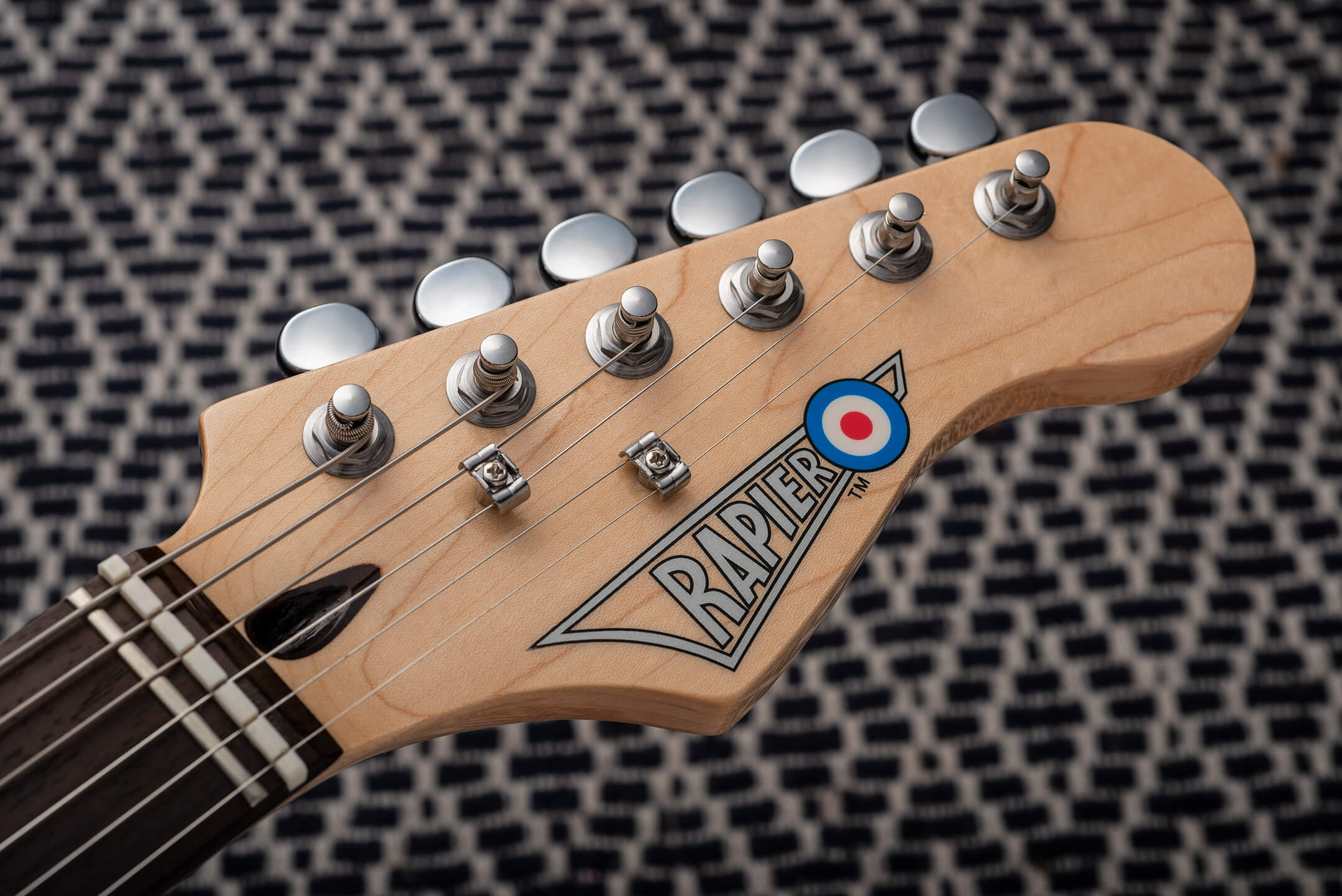 Adding some wobble to a barre chord, the vibrato effect is almost electronic in nature – not unlike an AC30 vibrato. It must be something about the way the individual strings pitch shift, but it sounds different to Strat vibratos and Bigsbys. The Rapier’s vibrato convincingly evokes the early 60s in a very musical way and although the up and down range could rival a Floyd Rose, it performs best when operated like a Bigsby. One downside on our review guitar is that the screw-in vibrato arm itself is very loose and won’t stay put in an optimal playing position – we have to reach downwards for it every time.

Once you’ve got your head around it, tapping into the Rapier’s extraordinary range of tones is very easy. The pickups impress, with a full and fat neck setting and a bright and biting bridge that clangs rather than quacks, in the early British style. The middle is throaty and slightly nasal, and can be combined with the other pickups for some spanky and chiming parallel-wired tones. The bass cut makes the Rapier jangle nicely, and helps to focus the lows with vintage fuzz pedals. 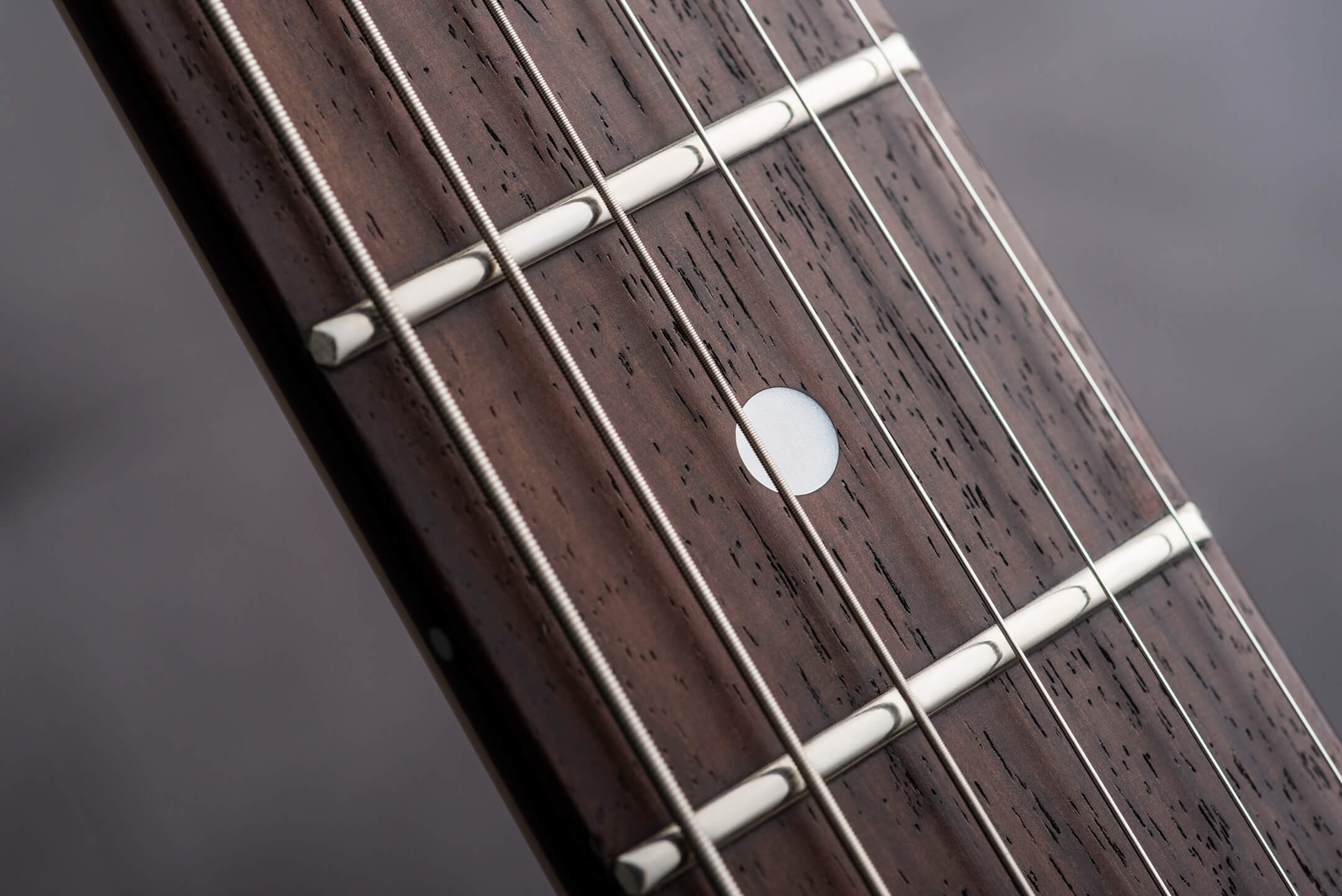 Although low-ish in output, the pickups segue from sparkling cleans into smooth and well defined overdrive with more than a hint of Strat-style sonics. There’s ample sustain but achieving full-tone bends requires some extra effort because the vibrato assembly moves under added string tension. On balance, we would be inclined to install that extra spring.

The Rapier 33 is an object lesson in how to reimagine and repurpose a classic design for modern players without sacrificing the visual and sonic qualities that fans love about the originals. Street prices are about the same as vintage examples that are in decent condition, but we’re pretty certain that the Rapier 33 is the more practical and playable option. 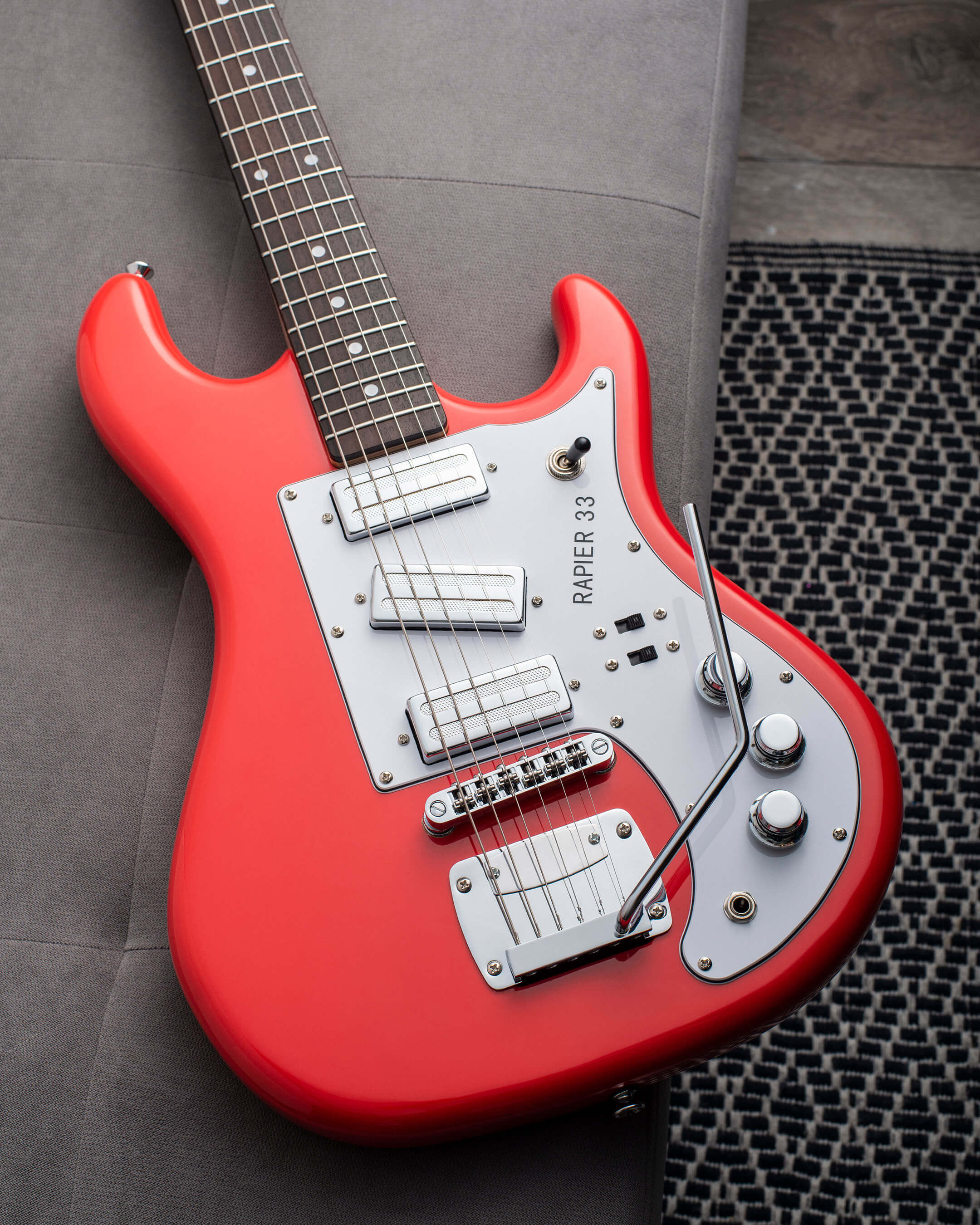