Fresh from the lakeland region of central Finland, this pine-bodied boutique stunner blends Fender and Gibson design influences with a dash of rustic Scandi cool. 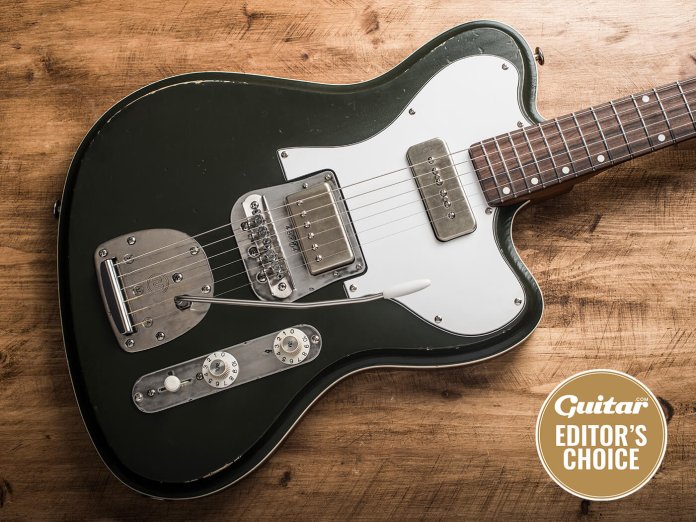 A mere 13 years after accidentally winning the Eurovision Song Contest with a goth-metal band, does Finland now have a high-class guitar builder to take on the world? A few days into our time with this beautifully crafted Vuorensaku, we think it might.

Saku Vuori’s designs are inspired by old Finnish houses and furniture and often make use of one of the country’s biggest natural resources: pine trees. Billy Gibbons is a Vuorensaku fan and these premium-priced instruments are now available in the UK via Coda Music.

This, then, is the T Family ‘Birke’ model. Vuori is a lover of Fender offsets and there’s certainly an element of Jazzmaster in the body shape, not to mention the Mastery bridge and vibrato tailpiece; but that’s combined with a Tele-style control plate and, most distinctively, an elegant German carve around the front edge of the body.

Defined by off-white binding, the dark green ‘top’ looks like a separate piece of timber but it’s clear from the grain that the Birke’s body is simply two slabs of pine joined down the middle.

And then we come to the pickups. This luthier winds his own and here, we get a humbucker in the bridge position, mounted to a metal plate that extends around the bridge posts and a P-90 at the neck. Single-figure DC readings hint that they’re wound vintage-style, rather than hot.

If you think things are heading in the direction of Kalamazoo, the neck goes further: it’s a comfortably rounded chunk with a profile described as ‘59 LP’. But it’s maple, with a Fender-style 25.5-inch scale length. Clearly, Vuori is one of those boutique builders who’s happy to cherry-pick features from across the spectrum of classic designs – and who can blame him for that?

The fretboard is pau ferro, a common rosewood alternative, and has been sanded to a compound radius – though the gradation is so slight, from 9.5 to 10 inches, that you might not even feel it. At the far end, you’ll find a neatly cut bone nut, and here’s another splash of local colour: it’s not just any old bone salvaged from a butcher’s bin, but Finnish elk.

The hardware is a combination of aluminium, nickel and stainless steel and it’s all been tarnished to go with the body’s tasteful relic job. The different metals aren’t very well matched in shade and texture, but nobody’s going to notice that when you’re windmilling away under stage lights. Most importantly, the whole thing feels super-solid – we don’t know much about those old Finnish houses, but if this guitar were a building, we’d trust it to keep out the cold north winds.

One more feature to note is the headstock, which has a sort of straightened-out Telecaster shape and a metal plate screwed to the front. This is one of four places where you’ll find the guitar’s serial number – it’s also on the back of the headstock, the bridge pickup surround and the neck plate. After half an hour, you should know it off by heart.

Pine as a tonewood? It’s not so unusual: Dennis Fano has used it for his Novo guitars and some say pine only fell out of favour with Leo Fender during the development of the Esquire because it dented too easily. That’s not really an issue for the Birke, whose edges are well and truly ‘worn in’ already. In combination with a relatively thick maple neck, this Finnish pine makes for a fairly heavy offset that balances naturally on the strap.

If all pine sounds as good as this, maybe we should stop worrying about a few dents. The guitar’s acoustic tone is fresh and resonant, with lots of warm sustain and a forthright midrange. It’s immediately likeable, and makes us want to hear it amplified as soon as possible.

A clean amp makes it clear from the off that both pickups have the hi-fi chops to preserve the guitar’s innate fullness of tone. The sound in all positions is big and smooth – maybe these pups aren’t as underwound as the resistance figures suggest – but there’s still room for some perky character to shine through.

Not that much perky character, though. You do get some of that special Jazzmaster sweetness in the midrange but, perhaps because of the efficient solidity of that non-rocking bridge, there’s none of the percussive plunk of a traditional offset. Whether you think that’s good news or bad is, as ever, a matter of personal taste.

The neck pickup does the jazzy thing with style, though it has little of the ‘snap’ you might be expecting based on P-90s in Gibson solidbodies. Likewise, the ’bucker at the bridge doesn’t sound much like a PAF, at least not in this setting: slam on the overdrive and it’ll gladly get stuck in, but the Fender elements of the guitar’s design give it a more breezy, less mids-focused tone than you’ll get from a Les Paul or SG.

Playing lead lines through a cooking tweed amp, there’s a glorious precision to the note attack on all three pickup settings. The P-90 serves up a nicely compressed thump all the way up the neck and the humbucker remains equally disciplined, never getting thin or spiky. Open chords sound rich yet neatly contained, but you might not play many of them – because that rounded neck with its easy satin finish makes for an irresistible soloing machine.

What we have here, then, is a complex brew of Fender and Gibson influences that carries through some of the best characteristics of both, resulting in a bold and beefy tone that’s all its own. If you’re passionate about the magic of the great solidbody archetypes, be warned that the Birke is not going to give you those classic sounds in their purest form. However, if you’re looking for the ultimate all-rounder to top off your six-string collection, this could be a strong – and distinctive – contender.