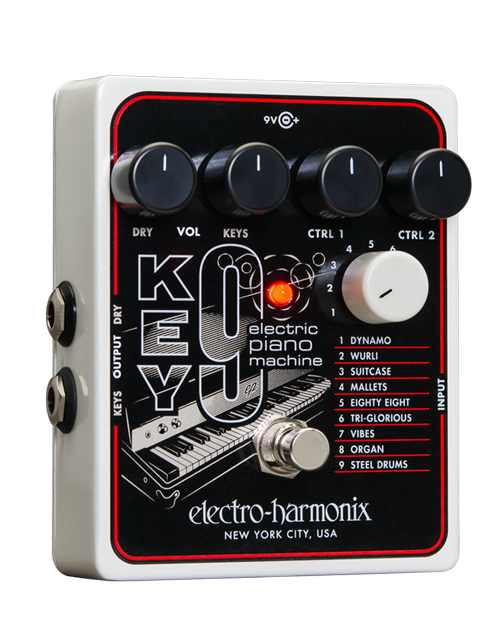 The good folk at Electro-Harmonix certainly seem to have been eating their greens lately. It seems as though barely a week goes by without the New York pedal manufacturer releasing a new weird and wonderful creation, and the Key9 is the latest.

Continuing EHX’s exploration into the somewhat niche world of keyboard and organ emulation pedals that saw the introduction in 2014 of the B9 Organ Machine and continued with the C9 and Mel9 Tape Replay Machine, the Key9 – or to give it its full name the Key9 Electric Piano Machine – is designed to synthesise some famous electronic keyboard sounds.

The Key9 is described by EHX as “completing the powerful trilogy” begun by the B9 and C9. It delivers nine presets, ranging from classic Fender Rhodes tones through Wurlitzer electric piano and wood marimba sounds to steel drums.

Now, if you’re a guitarist who doesn’t know his black keys from his white ones, you could be forgiven for thinking “Why the hell would I ever need this?”, and dyed-in-the-wool tonal purists may take some convincing, but the Key9 packs some seriously vibey sounds.

The dry and keys knobs give you control over how much of the wet and dry signals is present in the mix; the two controls can be blended together via the keys output or run independently through the pedal’s keys & dry outputs for distinct pure wet and dry signals.

The control 1 and control 2 knobs enable you to manipulate different parameters on each preset. So, for example, in Vibes mode – which emulates a metal vibraphone with motorised tremolo – control 1 adjusts the attack and control 2 the trem speed. On the Steel Drums setting, control 1 applies to chorus depth and control 2 chorus speed, and so on…

EHX recommends placing the Key9 first in your effects chain and warns that it does not perform well in an effects loop. The manual also suggests avoiding putting any distortion or overdrive effects in front of the pedal. We actually found that a subtle bit of drive worked nicely, but it’s best to proceed with caution, as dialling in too much dirt quickly sees things get muddy.

Applying a little compression was necessary on some of the modes to prevent the sound getting too peaky through our Fender Concert Reverb, and we found EHX’s advice that you’ll get best results using the bridge pickup to be true on both of our test guitars – a Fender Lite Ash Tele and a Gretsch Players Edition Tennessee Rose.

The Key9’s tracking is excellent and it’s clear that the company has continued to hone the formula it used for the B9 and C9. We particularly enjoyed the Eighty Eight setting, which does a fine job of emulating a Fender Rhodes 88 electric piano with tremolo, and the wonderfully strange Steel Drums mode brought a broad smile to our faces.

Part of the brilliance of the Key9 spans from the fact that EHX has avoided making it overly complicated, with simple, tactile controls and a compact,  uncluttered enclosure. Compared to, for example, the company’s Super Pulsar tremolo pedal, or its 22500 Dual Stereo Looper, getting to grips with the Key9 is kids’ stuff, and mastering and manipulating the nine presets shouldn’t take most players very long.

The Key9 would represent an excellent tool for a guitarist in a covers band looking to expand their range of on-tap sounds and reproduce some classic keyboard and organ sounds. Need to turn your hand to some Motown hits and The Doors’ Riders On The Storm in one set and don’t have a keyboard player in the band? The Key9 has it covered.

While it may not play nicely with all guitars, and the sub-bass can become a little overbearing using some neck pickups, the Key9 is a simple to use, enormously fun pedal that will find uses in a wealth of playing situations. 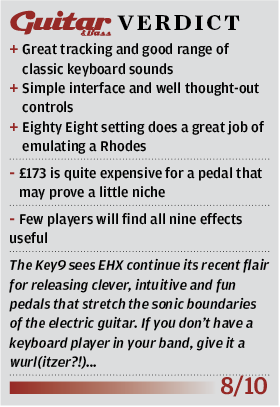