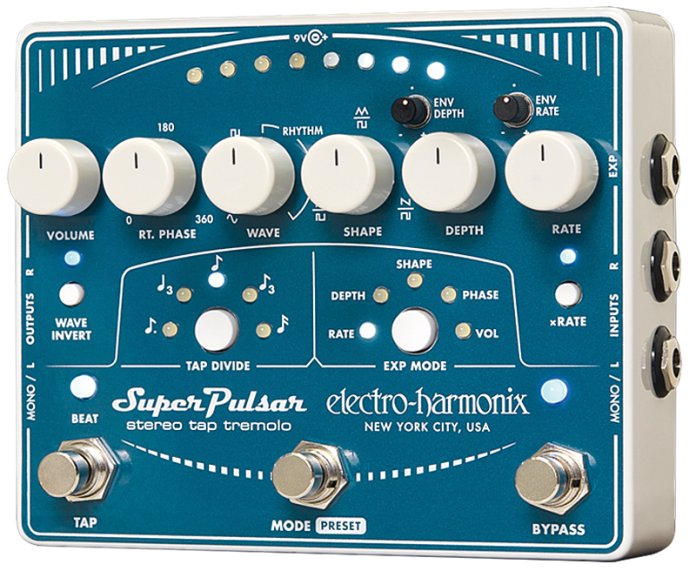 Tremolo is one of the staple electric guitar effects, intertwined in the evolution of the instrument, from DeArmond’s late 1940s water-based pedals, to Fender’s iconic onboard amp `vibrato’ tremolo circuits and modern pedalboard standards such as the Boss TR-2.

Electro-Harmonix has taken all that history and blasted it into space, turning a simple effect into a phenomenal musical tool. The Super Pulsar offers a dizzying range of features: analogue circuitry; sine, triangle and pulse waveforms; rhythmic patterns; a tap tempo; stereo ins/outs and bags more.

The pedal’s rectangular enclosure will be familiar to fans of the EHX range, sporting the same dimensions as the Cathedral Reverb and Deluxe Memory Man. It also comes with a mesmerising light show – eight blue LEDs that pulse in time to the effect rate; if the sonic witchcraft coming from your pedalboard doesn’t transfix your audiences, the ethereal disco lights are sure to.

The number of controls on the Super Pulsar may initially prove daunting, and we’d advise reading the manual thoroughly – no matter how tempted you are to dive straight in. So, let’s dive straight in.

The Super Pulsar quickly proves to be a highly creative instrument that sparks songwriting ideas. Subtle amp tremolo, rhythmic patterns, stereo panning and reverse effects are all at your disposal. Set the Wave knob to Pulse, with Shape around 9 o’clock and pair it with some reverb, and a simple arpeggio turns into a huge, throbbing ambient wash. Add an EBow to the mix to double the fun.

Beyond 12 o’clock on the Wave knob, you enter rhythmic territory. Select a pattern, strike a chord and the repeats gallop away into the distance at preset intervals. It’s like cheating at the guitar.

Venturing further down the rabbit hole, the envelope depth and rate controls create enormously inventive sounds. These two mini knobs link the effect speed to your picking dynamics ± the intensity increases or decreases as the string vibration slows. We now find it hard to resist ending all our songs by chopping a chord and listening as the tremolo slows and the sound dies.

All of this is wonderful fun on your own, yet can be tricky to harness with a band. However, the tap tempo function is your friend, and the tap divide switch splits the tap into seven note types. Unless you have a comprehensive command of music theory or a degree in applied mathematics, though, it’s back to the manual here.

We found the pedal’s busy surface, with 15 knobs, stomp switches and buttons a little troublesome to negotiate `live’. Accidentally hitting the xRate button mid-song resulted not in the gentle Twin Peaks-style throb we wanted, but the angry Dalek gargle of a ring modulator. It’s advisable to use the Super Pulsar’s eight preset locations; you might question whether that’s enough for a pedal of this depth, but who uses more than eight tremolo effects in one gig?

If you want only subtle amp-like sounds, you may find it tough to justify the RRP of more than £200, and to dedicate so much ‘board space, but the Super Pulsar offers infinitely more, and if you take time to explore its vast functionality, you’ll be rewarded. In fact,  we’d go as far as to say it’s the most feature-full, innovative tremolo pedal we’ve ever encountered. 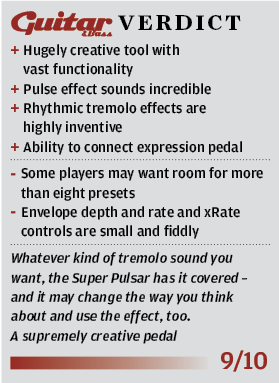