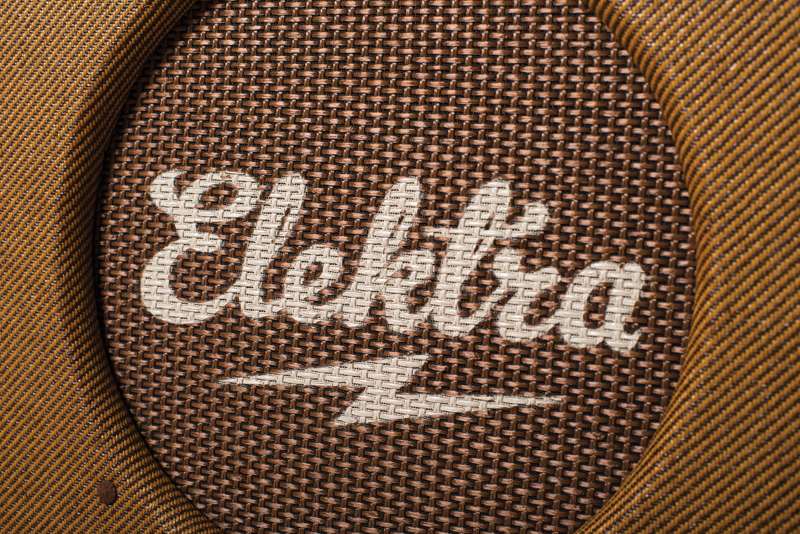 In 2012, Michiel Helsloot and a bunch of friends set about the task of recreating an iconic amplifier of the pre-war jazz era using modern components. The Gibson ES-185 was used by Charlie Christian and other jazz guitar pioneers, and it was quite different in topology and tone from amplifiers of the rock ‘n’ rolling 1950s.

Elektra’s take differs from Gibson’s original in several ways, but most changes were made for technical and pragmatic reasons. A 12-inch Celestion Gold alnico replaces the original, but unobtainable, field coil speaker and Gibson’s unusual flip-top cabinet with its removable amp chassis is gone.

Instead, Elektra’s The 185 has a sizable solid pine open back cabinet with period-style cut-outs, three bespoke leather handles and stitched leather corner protectors. Elektra’s logo is stencilled onto the grille cloth using a font that closely matches Gibson’s. 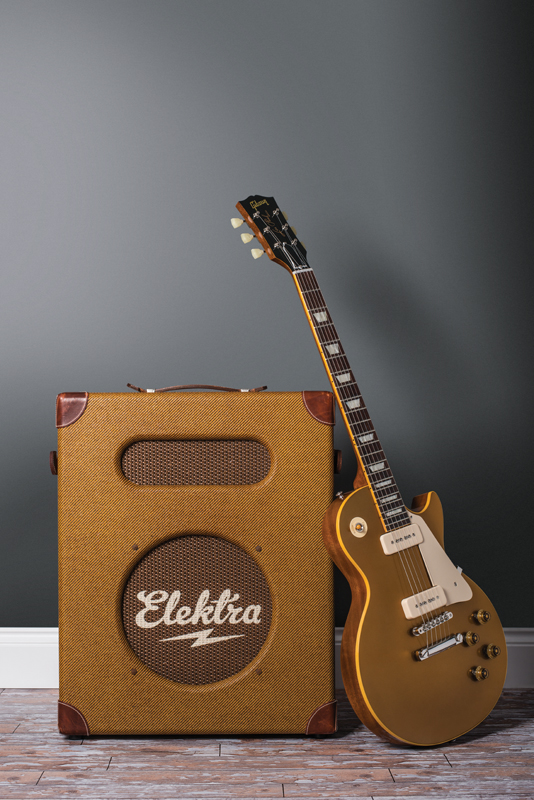 The earliest EH-185s had bass and treble controls. The Elektra is closer to the 1941 version of the EH-185 with a single tone control and three 6SQ7 octal preamp triodes. They feed a pair of cathode biased `Coke bottle’ 6L6s via a 6SN7 phase inverter.

Inside, it’s all hand wired on turret board with carbon composite resistors and TAD paper/oil signal capacitors. Surprisingly for a 14-watt amp, there’s a master control, which is actually an L-pad attenuator rather than a master volume. The gorgeous-looking faceplate accommodates a jack input for each channel, along with independent volume controls and a tone control.

This is almost a tale of two amps. Through the instrument channel, the Elektra is nominally clean, but plug into the microphone channel and you’re rewarded with the type of ferocious overdrive that would make Neil Young feel right at home. So let’s look at each channel in greater depth.

The instrument channel allows the natural treble response of a guitar to come through, but it doesn’t add top end in the manner of many late-50s tweed circuits. Fortunately this doesn’t mean that there’s a lack of clarity, and the Elektra brings out the finer tonal characteristics of any guitar you plug into it, while emphasising low midrange woodiness rather than upper midrange bite or twang. 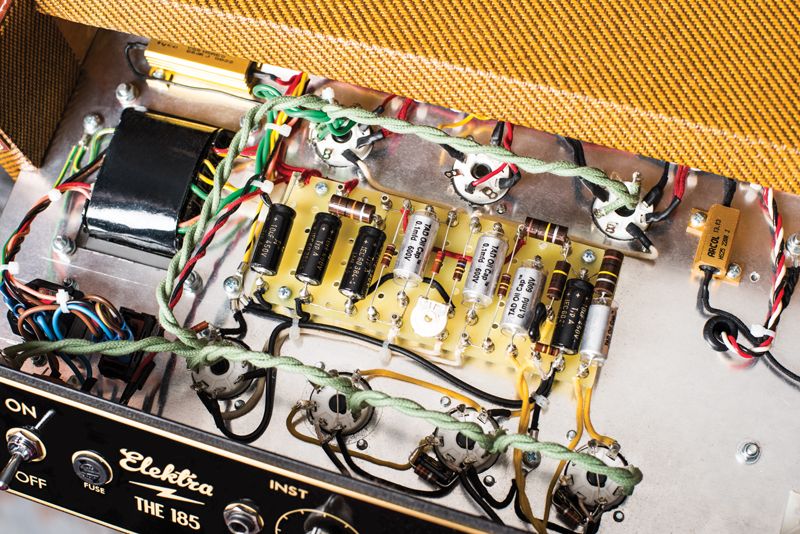 There’s also an acoustic-like punch at the front of single notes and chords, that’s followed by a softer sustain that allows harmonics to bloom.

The tone control works like no other I have encountered. The Elektra sounds brightest with the tone fully counter-clockwise, but the effect appears to be achieved by rolling off the lows rather than boosting the highs. As the tone is turned clockwise, the sound fills out and gets fatter, while simultaneously becoming more overdriven.

At first, this may seem restrictive, but in practice it’s easy to balance the desired frequency response and overdrive level because the master control is very effective and doesn’t negatively affect tonal quality. Better still, you can dial in the tone that you want, and then attenuate it for home practising or, if you’re using an archtop, balance the amp signal with the acoustic sound.

There’s ample clean headroom for jazz players who want pure clean valve tone at home or for small gigs. The volume control can go way beyond half way before vintage-output PAFs push the Elektra into overdrive. It’s a sweet, natural and endlessly intriguing clean tone that becomes almost magical when you push things a bit harder.

The breakup comes on so gradually it’s easy to dial in the sweet spot. Get it right and a strongly hit chord or single note becomes cloaked in a subtle haze of tube clipping that lends an almost horn-like bark. Crucially, it’s there if you want it, and the Elektra responds to you rather than vice versa.

If you think jazz guitar is all about clean, then check out many of the old jazz guitarists and you’ll hear subtle valve overdrive all over. It’s miles away from blues or rock overdrive, but it’s equally far removed from the dreary and soulless sounds that have blighted jazz guitar since the cubist period.

The microphone channel doesn’t pick up where the instrument channel leaves off. Instead, it starts further down the dirt track with thrilling results. Rather than the biting upper mids or tightly focused lows of more conventional amps, the Elektra at full strap delivers the primal thrill of an old-school valve combo on the edge of meltdown.

Laden with harmonics, the Elektra gets pretty wild, but it’s a full-bodied and smooth overdrive rather than the crunchy cut of Fender tweed or early Marshall-style circuits. The gain range is fairly wide, so there is plenty of fun to be had with the Elektra’s smooth transition from mild to heavy overdrive.

At full volume, some ringing oscillation sets in, but it’s not an issue because rolling back the volume a notch cures it. Overdrive and level max out before the volume control does, so nothing is sacrificed. Gibson EH-185s do exactly the same thing, so it’s a circuit characteristic.

Regular single coils provide ample output to drive the Elektra, but it really sings with PAF-style humbuckers. With a Les Paul, it is easy to dial in early ZZ Top, Southern rock and 70s West Coast overdrive tones. Bass is full, treble is sweet and there’s no midrange scoop.

Exactly as expected, the Elektra is very much a vintage-style amplifier. If you like old-school jazz guitar tone you need look no further, but there’s much more to it. The tonal range covers mellow chime that lends itself perfectly to Travis picking and rockabilly styles. You can also get a grungey, bluesy honk, raucous garage band grind and a full-on overdrive assault.

Taking its inspiration from a 1930s design means that The 185 is unconventional, but it’s certainly not too niche to enhance and round out any amplifier collection. It sounds
absolutely outstanding and looks amazing, and reviewing an amplifier built with such obvious love and care has been a real pleasure. 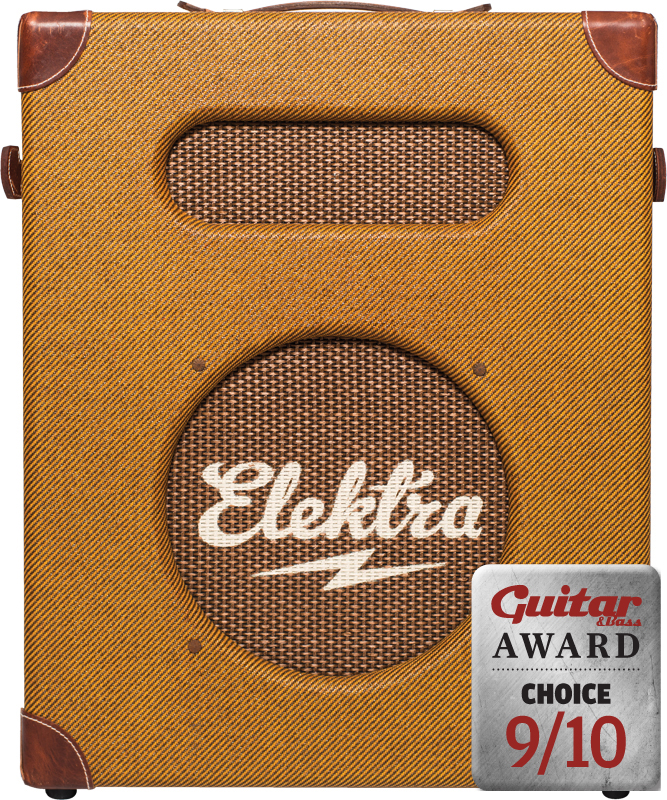 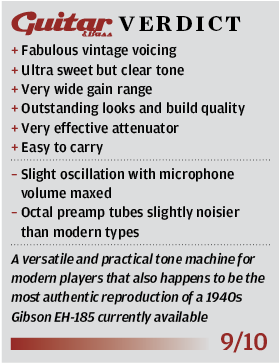