The ultimate stompbox now has a Max version with loads of extra sounds… including distortion. 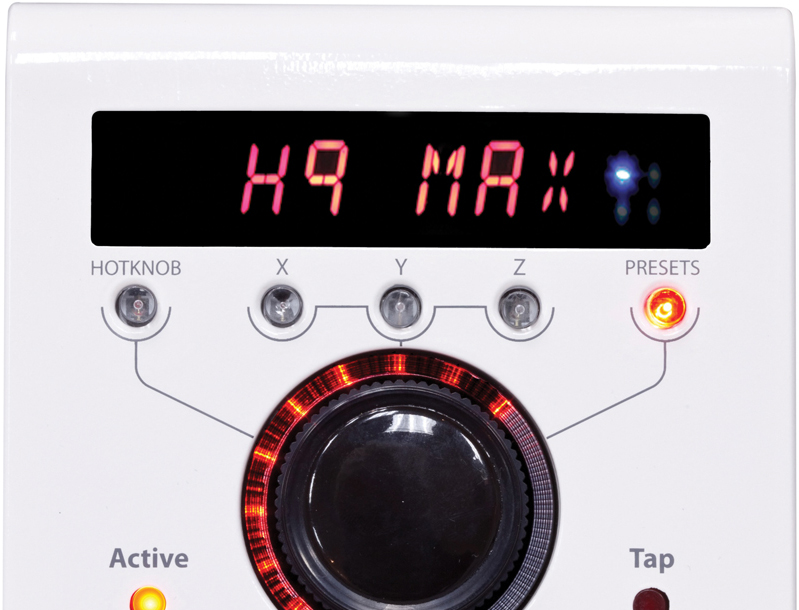 Does this look familiar? Back in June 2014, we reviewed a little white box called the Eventide H9, which blew us across the room with its studio-quality delays, reverbs and pitch-shifting effects. What we’re looking at here is, in fact, an identical enclosure; but the addition of the word `Max’ denotes a whole new level of sonic potential on the inside – including access to Eventide’s new distortion algorithm, CrushStation. And, yes, it also alludes to a recommended retail price that can be described only as spectacular.

Bear in mind, though, that this is very far from being an ordinary stomper. Eventide has been making pro studio processors for 40 years, and the bloodline of the H9 series traces right back to the original H910 Harmonizer, one of the very first devices to offer digital pitch manipulation. A more obvious link is to the current TimeFactor, ModFactor, PitchFactor and Space units, Eventide’s first forays into floor-dwelling effects.

The standard H9 (£479) takes eight of its nine algorithms from those pedals, the ninth being an UltraTap delay that isn’t found anywhere else; the H9 Core is a cheaper option at £359, which comes with just pitch and delay effects. Both of these can be upgraded with additional algorithms at $19.99 each, thanks to the magic of the internet, but the simplest and most satisfying solution – assuming that you’re not concerned by such minor trivialities as cost – is surely to cut straight to the Max version. 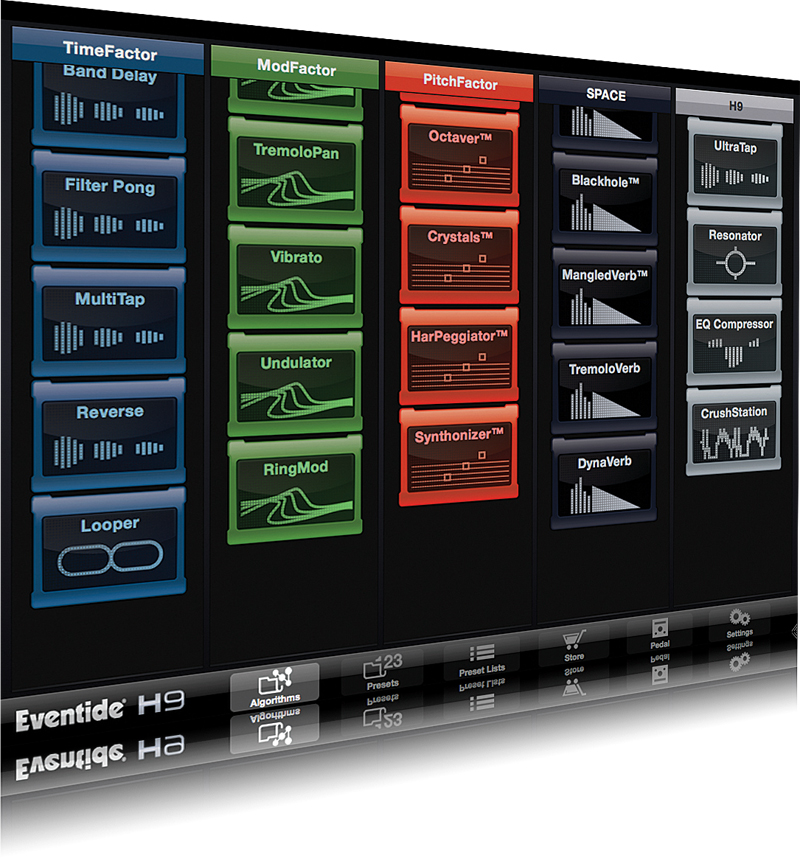 This doesn’t, in fact, come loaded with anything new, but once you’ve downloaded the free H9 Control software and paired it up with the pedal via Bluetooth, USB or MIDI, it gives you unlimited access to every effect in the Eventide stompbox armoury – including those it hasn’t even yet thought of.

We counted 46 of them: 10 each from the TimeFactor, ModFactor and PitchFactor, 12 from the Space, and four H9 exclusives. We’ve already mentioned two of these, CrushStation and UltraTap; the others are Resonator, offering spookily filtered delays, and a self-explanatory twin effect called simply EQ Compressor.

Each algorithm comes with a whole bunch of presets to play around with – look out for Transcendental Dolphin, worth it for the name alone – and the pedal has room to store 99 of these. You can tweak your tones with H9 Control or, if you don’t mind the fiddliness of navigating through menus on the little screen with double button presses, can access every parameter on the unit itself.

This might be necessary if you’re separated from your computer or iPad, but we’ll be honest, it’s no fun at all. Still, the tap footswitch can be used for toggling through presets, so have them all cued up beforehand and it is possible to get through a gig or recording session using only your dancing toes.

Reviewers are not paid to be sensible, so we begin with the usual process of plugging straight in (manual, what manual?) and zipping through the factory presets to see just how zany this thing can get. The answer is very zany indeed, but we won’t dwell too long here because these are the same sounds we heard from the original H9 last year.

The two key points to reiterate are that the audio quality is consistently fantastic – there’s a pristine clarity at the heart of everything this unit does – and that the scope for creativity is almost overwhelming.

There are tape-style delays, amp-style reverbs and 80s-style chorus sounds, but it’s the more extreme effects that really mark this out as a special piece of kit. The pitch algorithms can be used to create layered harmonies and arpeggios, while the swelling reverbs and heavily modulated delays conjure up atmospheres that you might not have thought possible from a guitar. Well done for blowing us across the room again, Eventideº but now let’s talk about the new bits.

This is where it all so nearly went badly wrong. Our review unit did not come with a mini USB cable and the one we dug out from a drawer didn’t seem to work, while establishing a Bluetooth connection with a MacBook proved impossible. Frustration peaked and the H9 Max was grumpily stuffed back into its box, ready to be thrown off the nearest tall building. 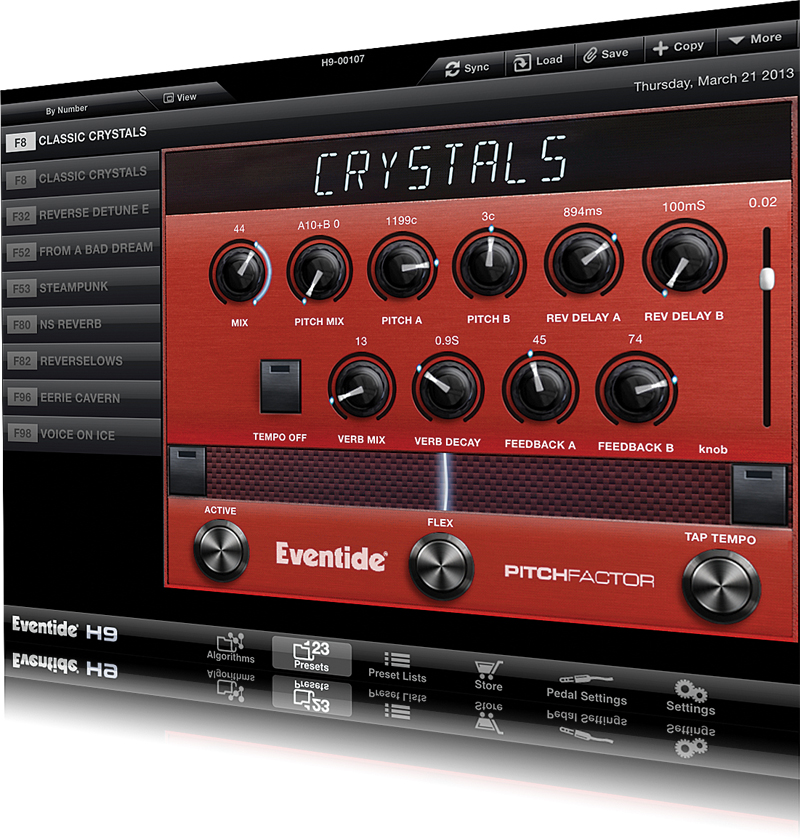 But then everything changed: a working cable appeared, and meanwhile Eventide’s UK distributors supplied us with the login details for this specific unit so we could unlock the Bluetooth (you’ll need to set up your own account). The lights came on and all was forgiven.

Once you’re in, H9 Control is a tidy piece of software with a simple interface that makes selecting and editing presets a doddle. The only slight annoyance is that, when you want to save a new sound to the pedal, the dropdown menu gives you only a list of numbers from 1 to 99, with no indication of which ones might already be occupied. It’s quick, though, and the on-screen knobs are just as responsive as physical controls.

We’ll focus on the CrushStation algorithm, because this is the effect that marks a bit of a departure for Eventide. Is it reckless for a specialist in digital manipulation to dabble in the hairy-backside stuff? Well, maybe not. Most of the presets are on the heavy side, and they score highly for fat, beefy impact; pull the gain down into Tube Screamer territory and things start to sound just a wee bit less natural, but that’s to be expected – and anyway, you already have a pedal for that, right? 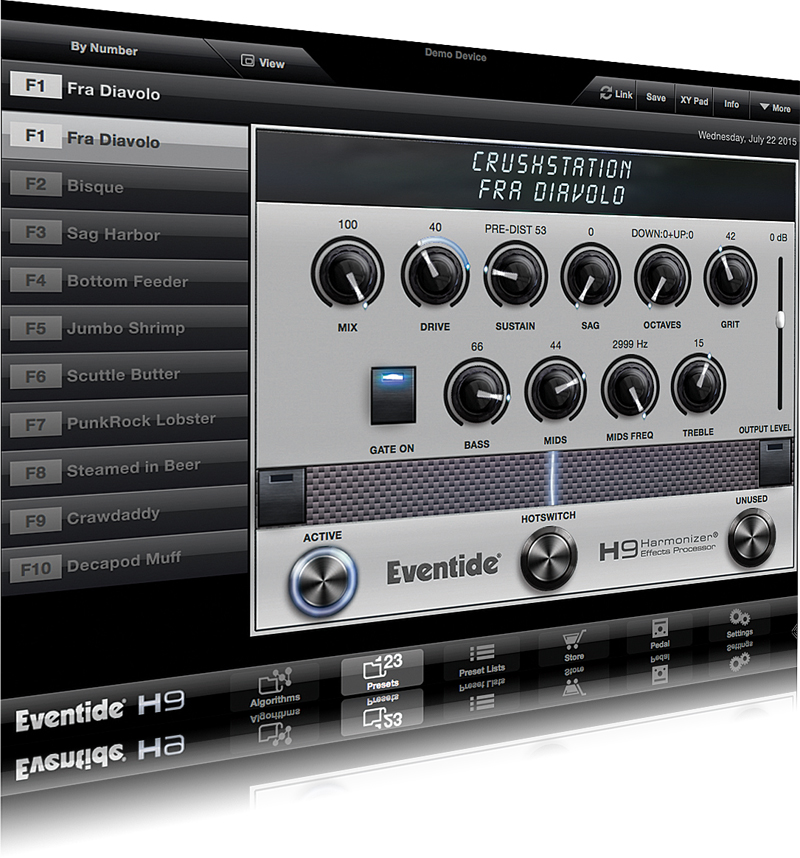 here are some interesting variables beyond the obvious EQ and gain controls, most notably `octave’ for Octavia-style textures, `sag’ for simulating lo-fi voltage starvation, and `sustain’ for adding thickness either before or after the distortion. All of these work fiendishly well and help to ensure CrushStation is adding genuine value to the H9 offering – there are sounds available here that you definitely don’t already have a pedal for.

The extra delays and reverbs are every bit as mindblowing as the ones that are available to standard H9 owners, and it pays to experiment with two amps in stereo. It’s just a shame you can’t create `whole pedalboard’ presets using several effects daisy-chained together.

At its heart, perhaps, this is still more of a studio processor than a gigging tool; for many players it might even have made more sense in rackmount format, with a nice big screen and lots of knobs for hours of easy tweaking without a laptop or tablet in sight. 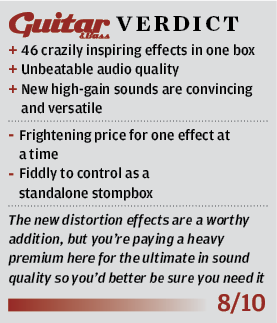 There’s not a lot of competition in the compact one-at-a-time multi-effects market, with Eventide’s most obvious competitor in the delay and reverb stakes, Strymon, keeping its effects such as the TimeLine and BigSky individual. But here are a few alternatives to check out… 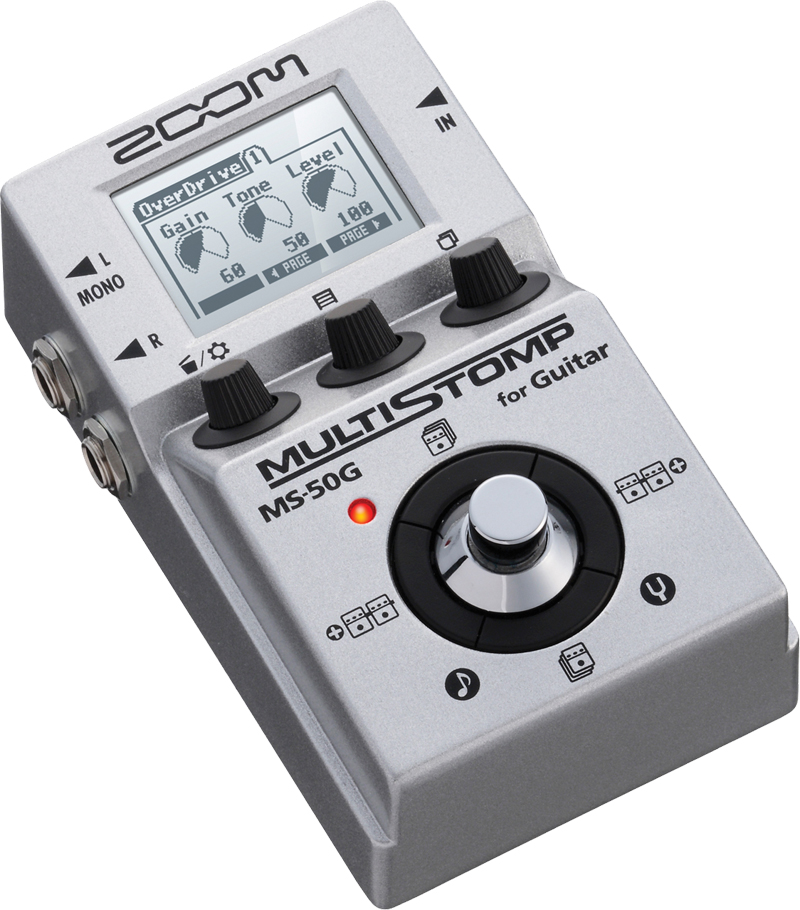 Zoom’s latest MultiStomp unit crams 55 custom guitar effects and amp models, plus a chromatic tuner, into a stompbox-sized enclosure for a retail price as low as £69. In addition to all the usual effects types, you get emulations of amps from the likes of Fender, Marshall, Vox, Two Rock, Diezel and ENGL. 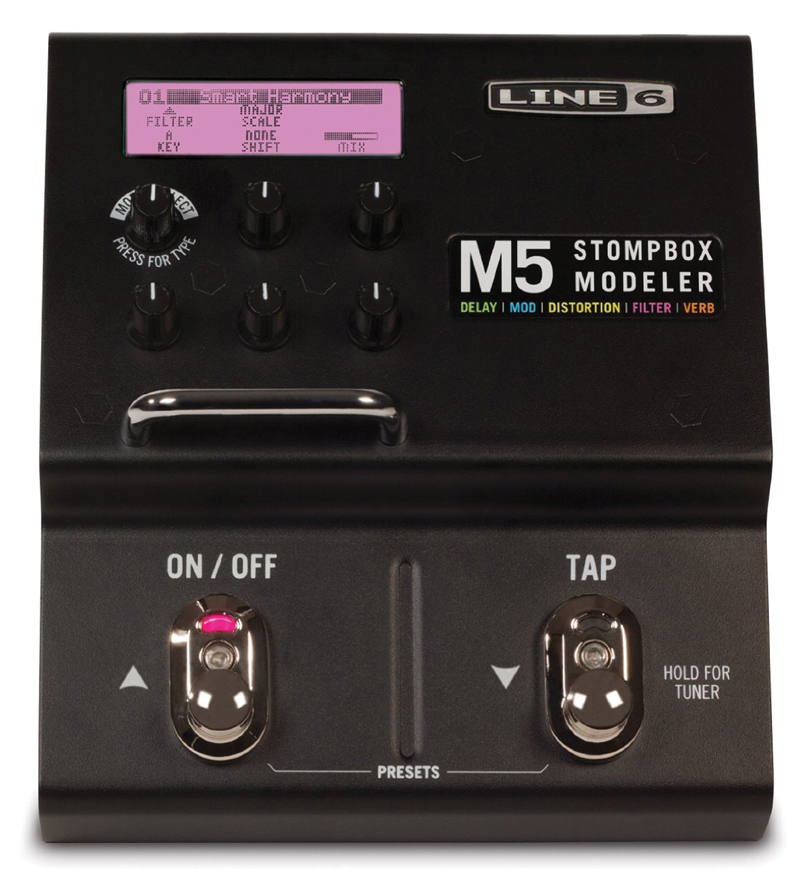 Although its now been superseded by the larger, more advanced M9, the M5 is a great place to start in the world of multi-effects, offering a wealth of reverb, delay, modulation, distortion and overdrive effects at frankly ridiculous street prices as low as £72. 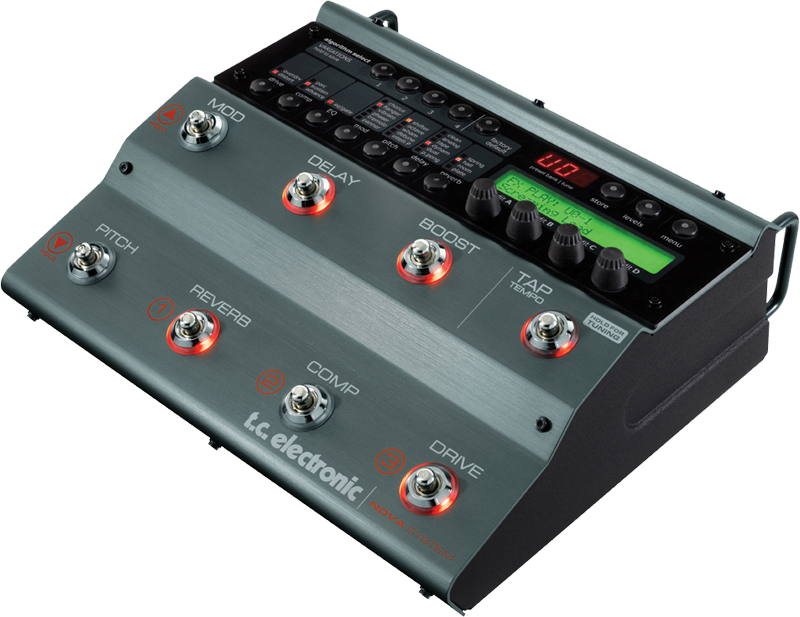 While the Nova is larger than the other selections here, it offers a vast range of effects in six blocks, and can be found online for a very attractive £140. It incorporates TC’s innovative G-System and Nova Drive technology, with a fully analogue drive and overdrive section.