The Venus is an all-solid mahogany cutaway with onboard electronics. Huw Price is out of the blue and into the brown… 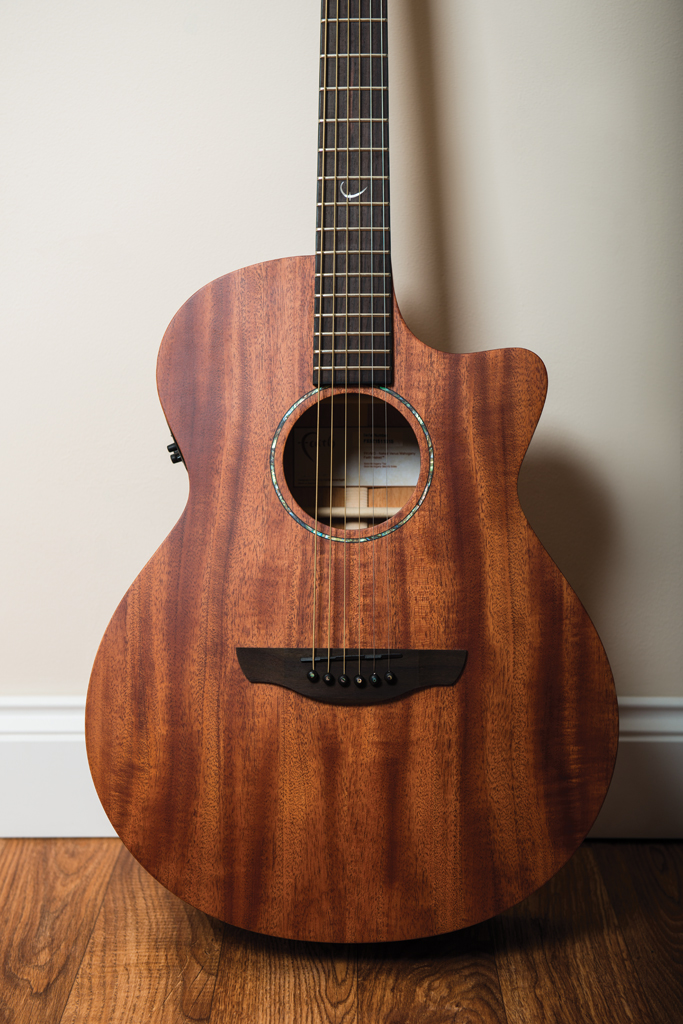 There’s no doubt about it, Faith makes an awful lot of guitars. The range is divided into no fewer than 10 different series, and this month’s Venus comes from the planetary-themed Naked range.

This curious choice of name reflects Patrick James Eggle’s design ethos. He explains: “Each of the Faith Naked instruments is 100 per cent solid tonewood – in keeping with all other Faith series. However, the cosmetics and non-essential dressing has been stripped away, leaving the guitars in their natural, Naked state.”

It’s also claimed that the satin finish allows the tonewoods unrestricted movement and the ability to breathe. However, there is no body binding and Faith’s website warns the Naked Venus “will happily show the battle scars of every musical encounter”. So take care if you’re not a fan of the relic’d look.

Despite fears that the Naked Venus might look not unlike a door panel from a 1970s suburban semi, in the flesh, so to speak, the body has an attractive red brick hue with a fair bit of flamey figuring. The website distinguishes between the body’s Indonesian mahogany and the less specific `mahogany’ of the neck.

The neck has a muddier brown appearance and the finish both looks and feels slightly different. Apparently, the body benefits from a two-stage satin finish, whereas the neck is plain old satin. Consequently, the body is smoother to the touch than the back of the neck, which some may feel is the wrong way round. 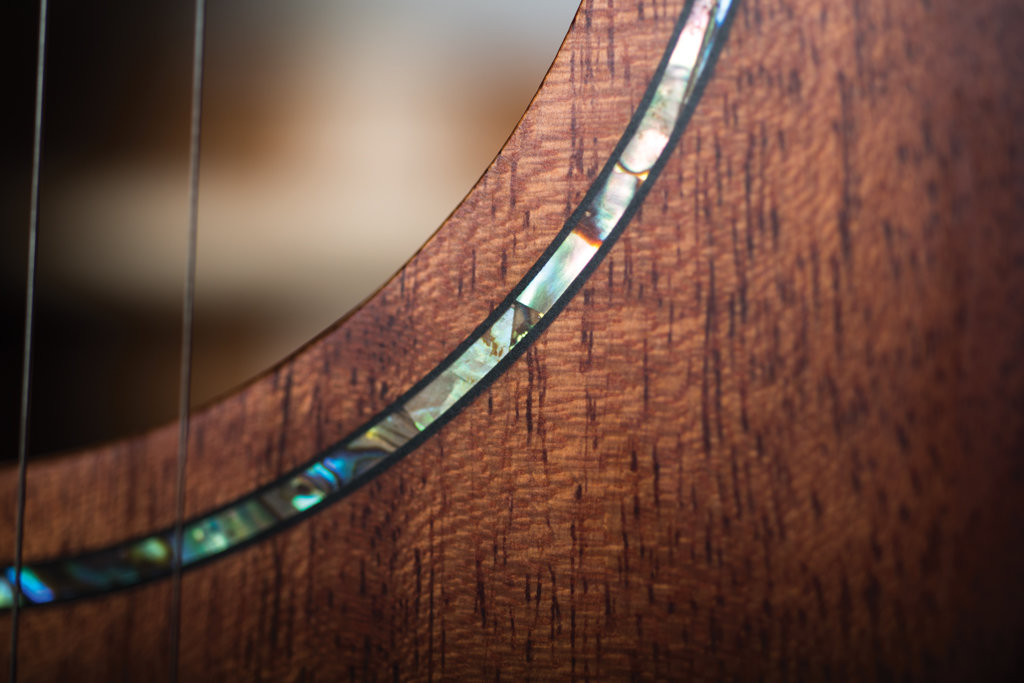 There is also some murky finish build-up around the rosewood heel cap and some sanding marks on the heel adjacent to the neck joint. The blues and greens of the abalone rosette really pop next to the mahogany; it’s so striking that the regular pearl logo on the headstock may seem like a bit of a letdown, but it does match the elegant 12th-fret inlay.

Measuring 15 inches across the lower bout and 4.25 inches deep, the Naked Venus is comfortably compact. The fingerboard is black bound in order to conceal the fret ends, and it matches the NuBone nut and saddle, as well as the hardware.

Located conveniently on the upper bout, there’s a Faith-branded but Shadow-manufactured control panel for the onboard pickup system. In addition to the battery hatch, you get an onboard tuner and polarity switching plus volume, bass and treble controls.

There are a few minor finishing imperfections, but overall the construction has been executed to a fairly high standard. The full neck profile has a late-50s Gibson sort of feel that many players will find comfortable, and the string action is fairly low but buzz- and rattle-free.

I should probably confess from the outset that I really like all-mahogany acoustics. What’s more, in the period immediately prior to the Naked Venus’ arrival I had been listening to Nick Drake’s album Pink Moon and, as always, marvelling at his guitar tone.

There is some controversy about what guitar Drake played. Some say it was a Martin D-28, but most believe it was either a Guild M-20 or a Martin 00-15. Drake’s tone sounds nothing like a D-28 to my ears, so my money would be on one of the all-mahogany models. 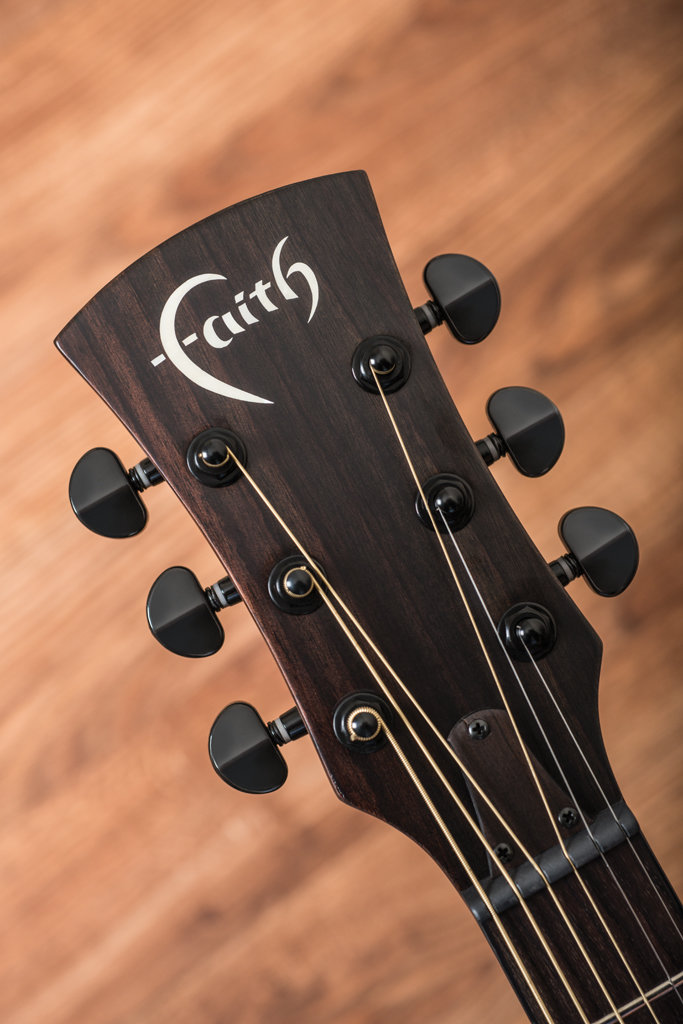 In the spirit of sonic exploration, I dropped the tuning down to CGCFCE, put a capo on the second fret and gave it a go. Although I’ll never be able to play like Nick Drake, the Naked Venus’ mellow, woody and intimate voicing sounds very convincing to me. All I needed to seal the deal was a set of really dead strings.

The Naked Venus is certainly not lacking in treble response, but it’s nowhere near as bright or harmonically supercharged as spruce guitars. It’s a drier tone with a softer upper-midrange that brings chord voicings to the front rather than obscuring them beneath a chiming top end and thumping bass.

Earlier, I described the tone as intimate, and when you’re playing the Naked Venus it can seem that way. Later, when I showed the Naked Venus to another guitar player, he remarked on its loudness, and it turned out that the guitar’s tone is affected greatly by the acoustic environment.

Played with a plectrum, thumb pick or fingernails, it has a firm tone with bold definition. However, it can sound subdued and a bit lifeless when you use the fleshy parts of your thumb and fingers. That’s when the potential downside of an all-mahogany body may become apparent for some. 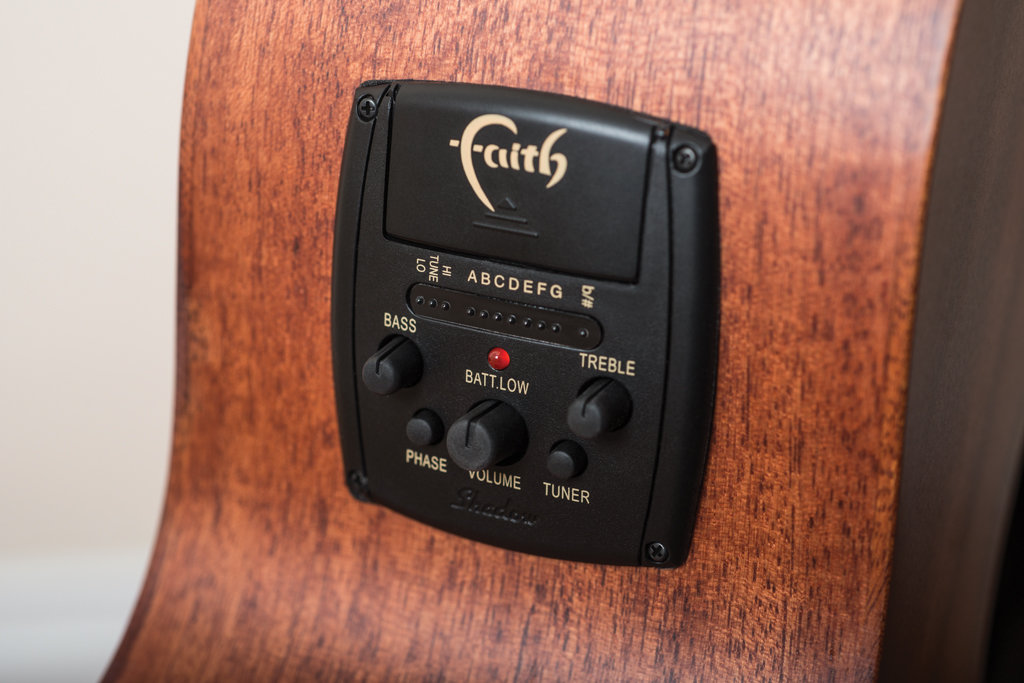 With new bronze strings, there is a slightly metallic and crashy quality that lends itself nicely to blues and ragtime picking. It’s a convincingly rootsy tone that’s enhanced by relatively short sustain and the absence of harmonics lingering on inside the box. The bass isn’t strong enough for bluegrass playing, and even in open tunings the Naked Venus doesn’t really pull
off `ethereal’.

Moving on to the electronics, the Shadow system impressed from the outset. Although the transducer is an undersaddle piezo, with the treble and bass controls set dead-centre the tone was full, sonorous and even. The treble was refined and the low frequencies exhibited good feedback resistance.

It’s the full package, too, with polarity switching and an onboard tuner. I appreciated the fact that the tuner operates without any need to plug in a cable, and the results are very accurate. In fact, it outclassed the slightly sloppy machineheads, and I did find the intonation a bit off – especially in dropped tunings.

The Naked Venus does the dry depression-era mahogany tone convincingly, but the looks are bang up to date. The black and mahogany theme is pleasing to the eye and the unfussy styling with minimal decoration is smartly stylish. Overall, this is a very attractive guitar with upgrade potential and impressive tone quality at an affordable price. 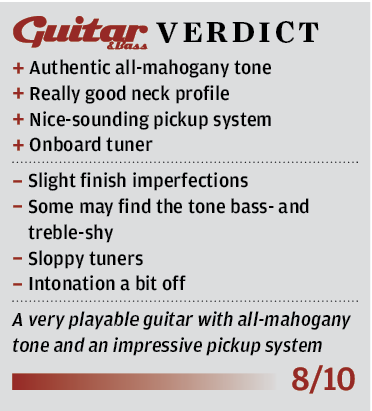