Masters of bespoke boutique go ready-made. We find out if the Fano experience is alive and well in the new Standard Series… 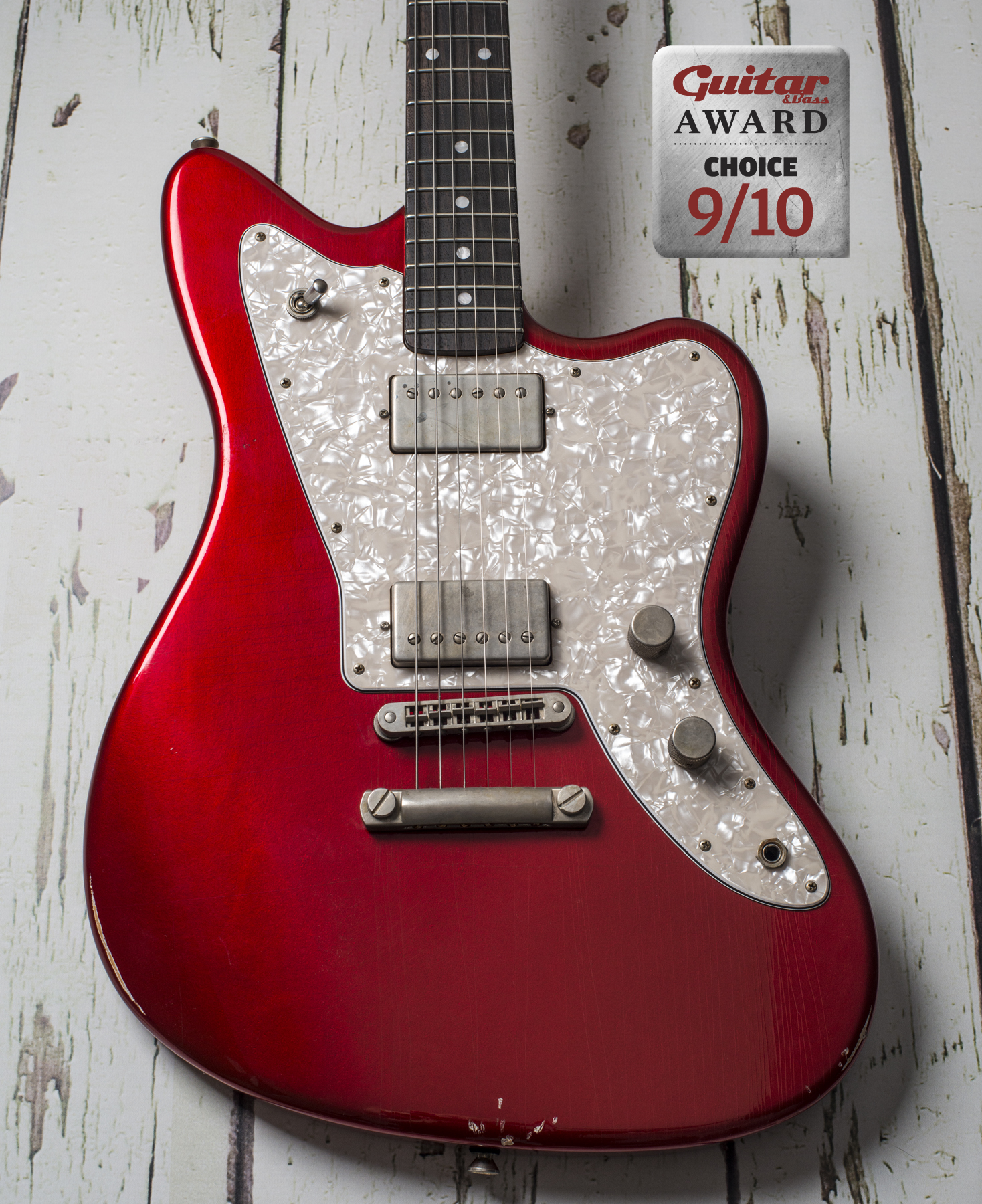 October 2015 saw Dennis Fano leave the company he founded and launch Novo Guitars. Happily, Fano Guitars continues to exist, manufacturing Dennis’ vintage-inspired Alt de Facto designs until recently in Arroyo Grande, California and now Scottsdale, Arizona as part of the Premier Builders Guild portfolio that also contains Two-Rock and Tone King amplifiers. Fano himself may have left the building, but the Scottsdale workshop is headed up by Jack Schwarz, a Fender veteran of more than 30 years.

While the Alt de Facto instruments offer an array of custom options – there are numerous pickup and hardware configurations, a rainbow of finishes and even 12 different knob types from which to choose – prices start at £2,299 and rise to around £3,499. Great guitars they may be, but the Alt de Factos remain unattainable objects of lust for many of us. Wouldn’t it be nice if there was a more affordable option? That’s where the Standard Series comes in… 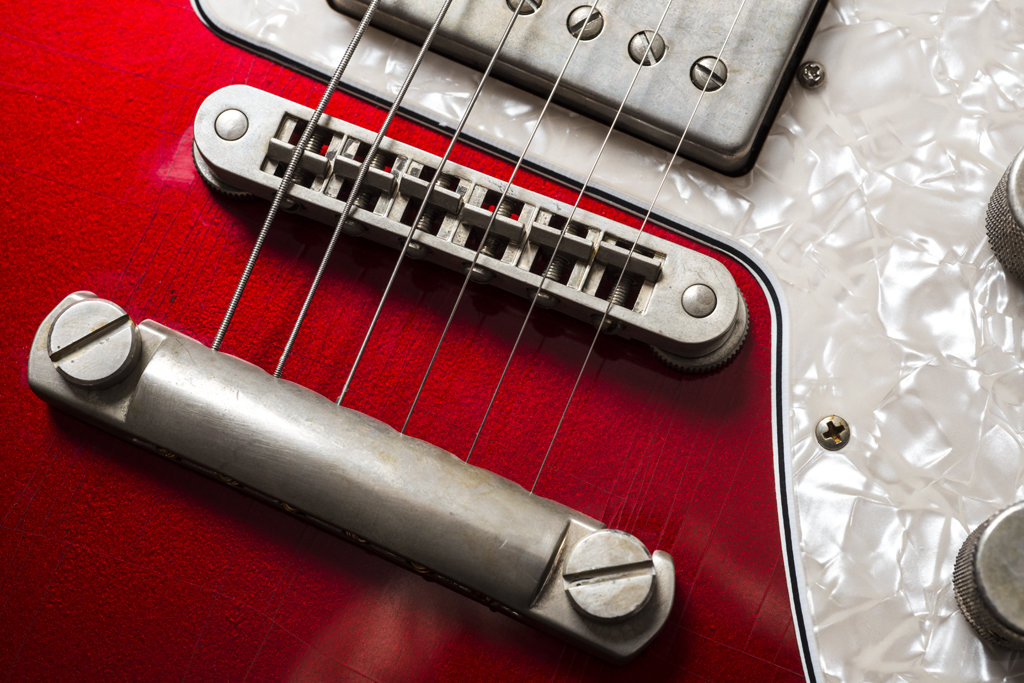 Although prototypes made an appearance at Summer NAMM 2015, it’s taken a while for these instruments to land in the UK. Priced at a more working man- or woman-friendly £1,699, both the Standard JM6 we have here and the Standard SP6 (very much a Telecaster/Les Paul Special collision) take two staples of the Alt de Facto range and offer them in a limited number of colours, pre-configured with Fano-branded hardware and pickups sans options other than a P-90 equipped version of the JM6.

Hot-rodded and stripped-down offset guitars are nothing new, of course. However, aspiring noiseniks and alt.rockers have a lot more choice these days than they did back in the 80s when the likes of Sonic Youth were gaffer taping over or pulling out the rhythm circuits of dirt-cheap and unfashionable vintage Jazzmasters and Jaguars and routing them for humbuckers.

The current Fender catalogue contains several mid-price ‘buckered Jaguar and Jazzmaster models, but the JM6 brings a boutique vibe and a little Gibson influence to the party with a back-angled headstock and slight neck pitch designed to help it play nicely with a tune-o-matic bridge. 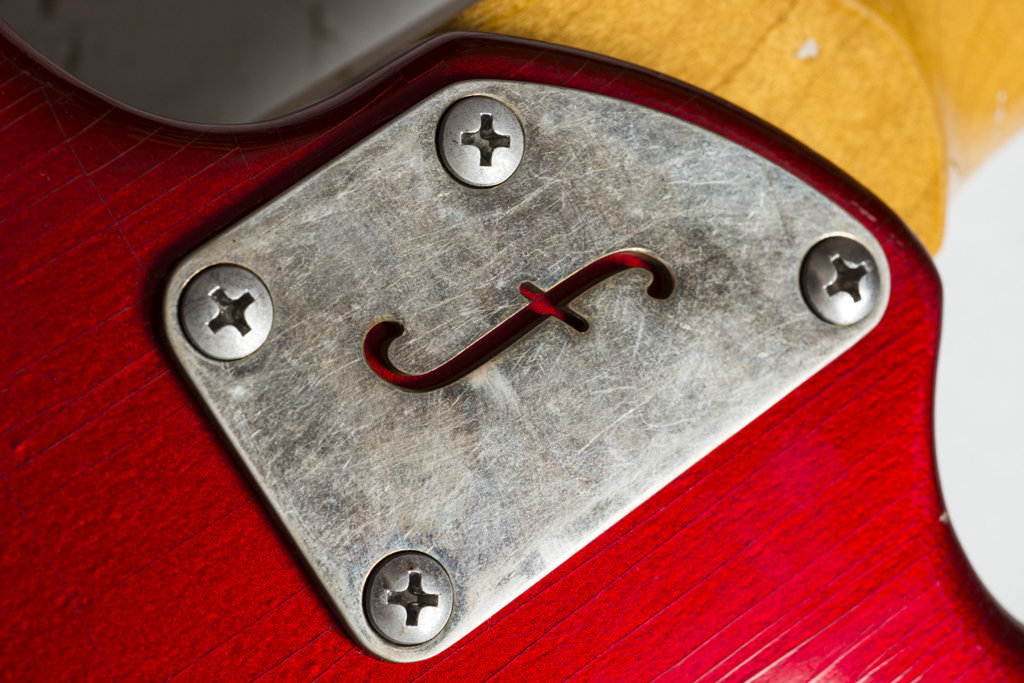 The JM6 here could be regarded as a ‘transition’ model as, despite the ‘Hand Made In California’ decal, its serial number indicates that the neck and body were cut and finished in CA and distressed and assembled in Arizona.

The level of distress applied to the Standard Series’ nitrocellulose finishes is categorised as ‘light’ but the artificial ageing of our Candy Apple Red guitar is more of a ‘medium’ considering the number of simulated dings, wear marks and exaggerated checking on the alder body and stepped maple headstock.

Aside from a few dings near the body end, the amber-tinted neck remains glossy, while the edges of the dark rosewood slab ‘board have been rolled for comfort. 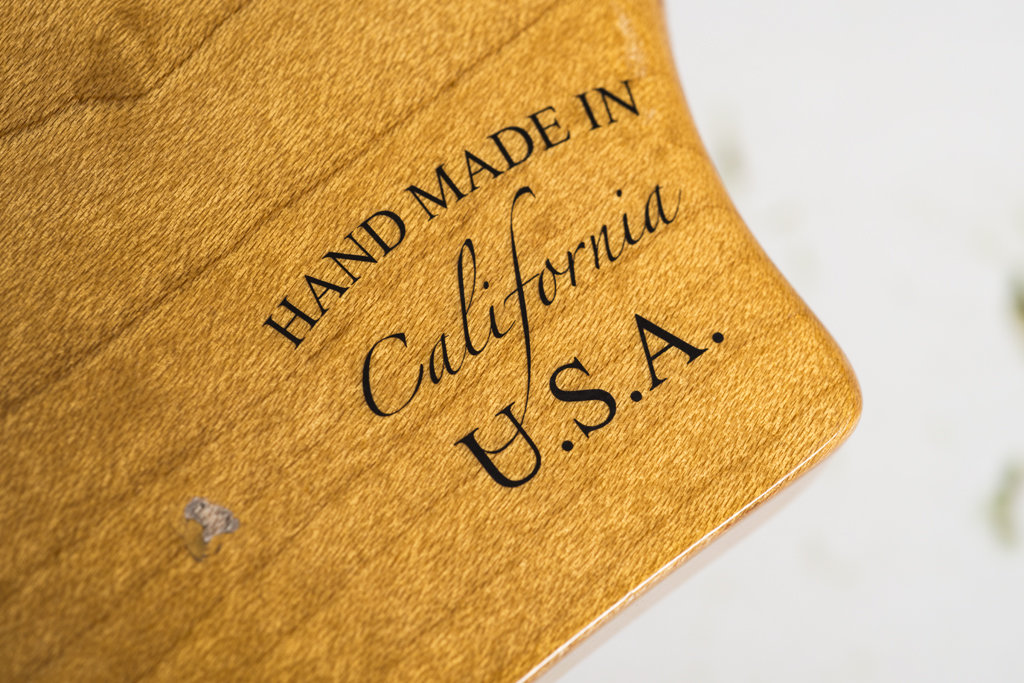 There’s no hardcase, which may make a few eyebrows twitch in this price bracket but if we’re thinking pragmatically, a well-padded gigbag such as the Fano-branded example supplied offers more than sufficient protection for a bolt-on solidbody when travelling to the kind of domestic gigs that most of us play regularly.

The fact that you can sling it over one shoulder while carrying something else in your hands means one less trip up that awkward pub staircase from the van, leaving more time for drink… ahem, rocking.

There are some traces of what could be white buffing compound in the fingerboard’s pores here and there but otherwise, like every other Fano design we’ve played, the neck is a thing of joy. The medium-slim ‘early 60s C’ has a slinky feel, while the compound ‘board radius transitions sympathetically from a barre chord-friendly vintage 7.25 inches to a more contemporary 9.5 inches. 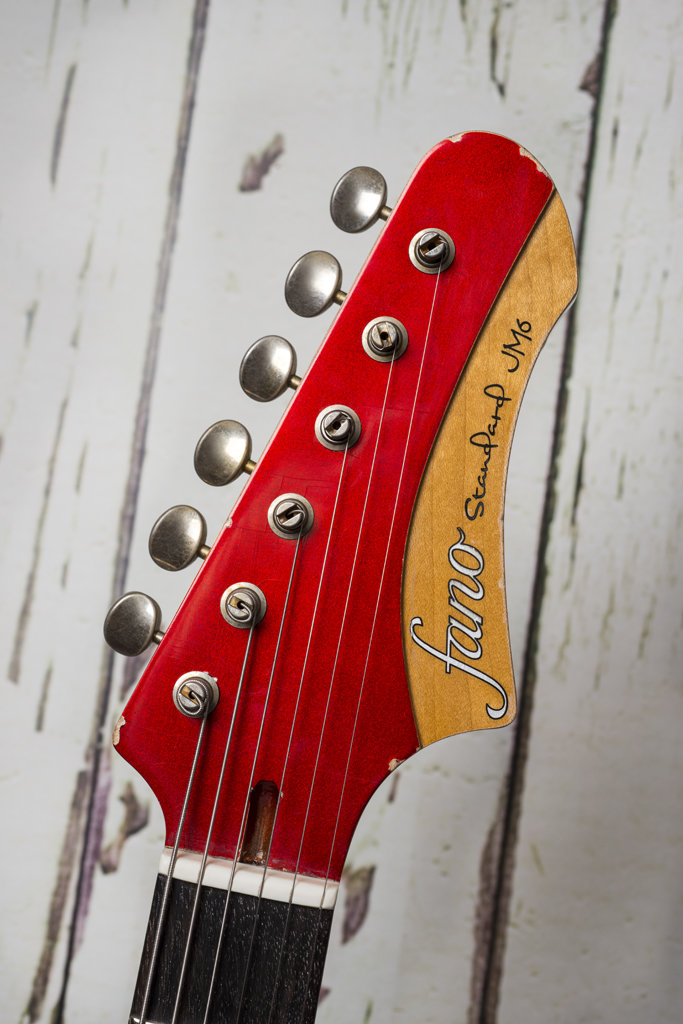 A 25.5-inch scale length guitar it may be, but there’s no painful tautness here, just an addictive fluidity that opens doors rather than closing them. Aided by 22 bend-friendly frets and a curved neck join design that has less mass on the treble side than the traditional square Fender heel, high-register lead and chord playing is a breeze. Fretwire obsessives take note: though the official spec claims that this is Jescar 6105 fretwire, ‘6105’ is Dunlop nomenclature, so this is most likely Jescar 55090, which shares that particular Dunlop wire’s 2.29mm width and 1.4mm crown height.

Although a little hotter than our reference vintage PAF clones, plugging in reveals the Fano humbuckers are not overcooked and have more of the articulate clarity of high-quality aftermarket boutique units than you’d get from generic, mass-produced ‘buckers. The JM6 sounds great for a wide variety of playing styles, but there’s no doubt that this guitar’s aesthetic persuaded us initially to indulge some teenage influences that hadn’t been given an airing for some time. 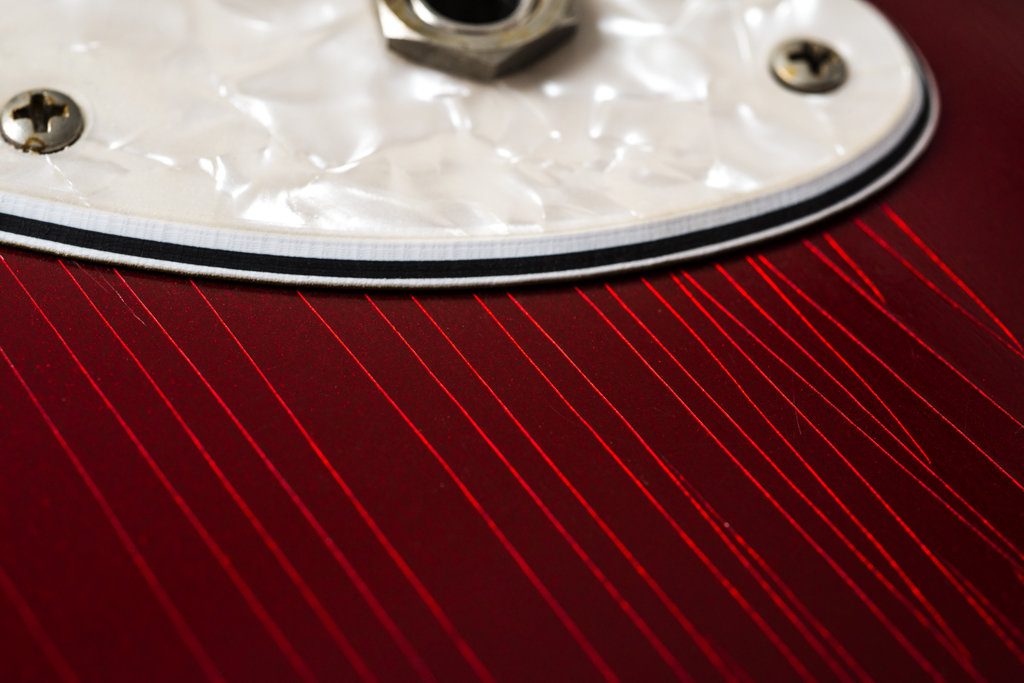 With a crunchy amp tone, the JM6’s bridge pickup is absolutely perfect for grungy powerchord rock from across the pond, and we found ourselves dusting off long-forgotten Nirvana riffs and songs from the first couple of Weezer and Foo Fighters records. The JM6 is not stuck in the 90s, though; more recent, muscular heavy rock is served equally well as rootsier styles from further back in time.

Fano’s decision to opt for poise over power when it comes to pickup voicing also pays dividends when you back off the gain as a springy, bolt-on spank enters the picture, translating the likeable acoustic character of the instrument effectively into an amplified context.

It may be a dual-humbucker solidbody, but jangly arpeggios, pretty, Hendrix-y clean parts, even fluid blues, are covered with style. While offset guitars have often been characterised as instruments that belong on the fringes in the hands of leftfield experimentalists, the Standard JM6 deserves a place in the mainstream. 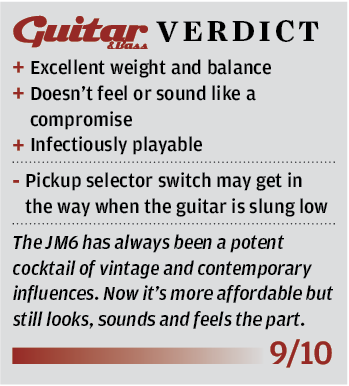 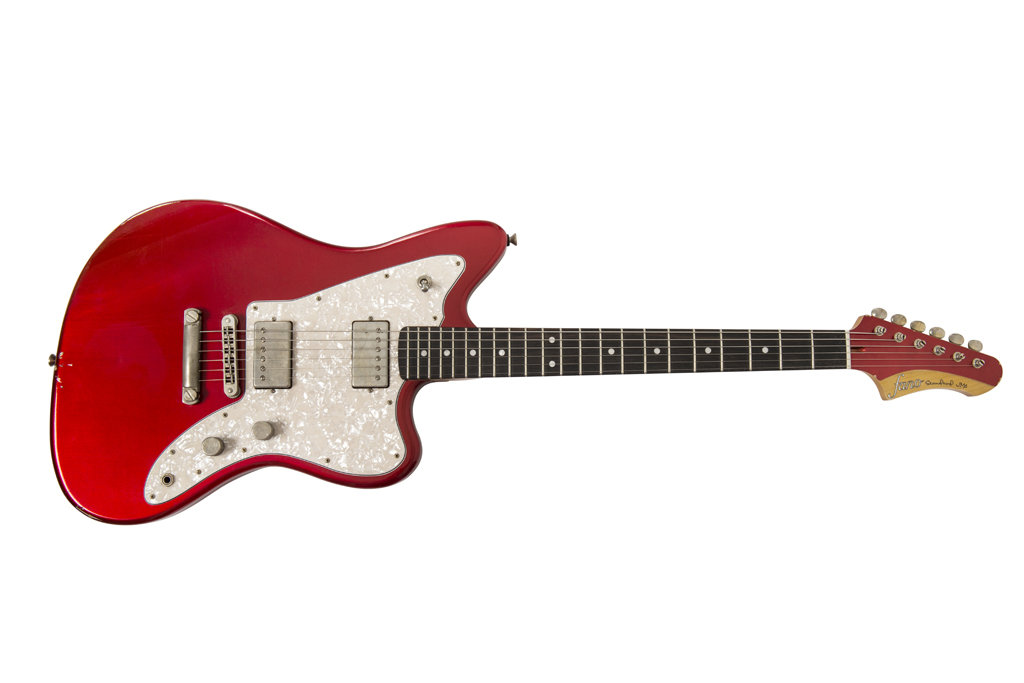