The oversized cabinet and 15-inch speaker made the Pro a cult favourite among tweed fans. Testing Fender’s latest reissue in the Custom series, we discover that size really does matter. 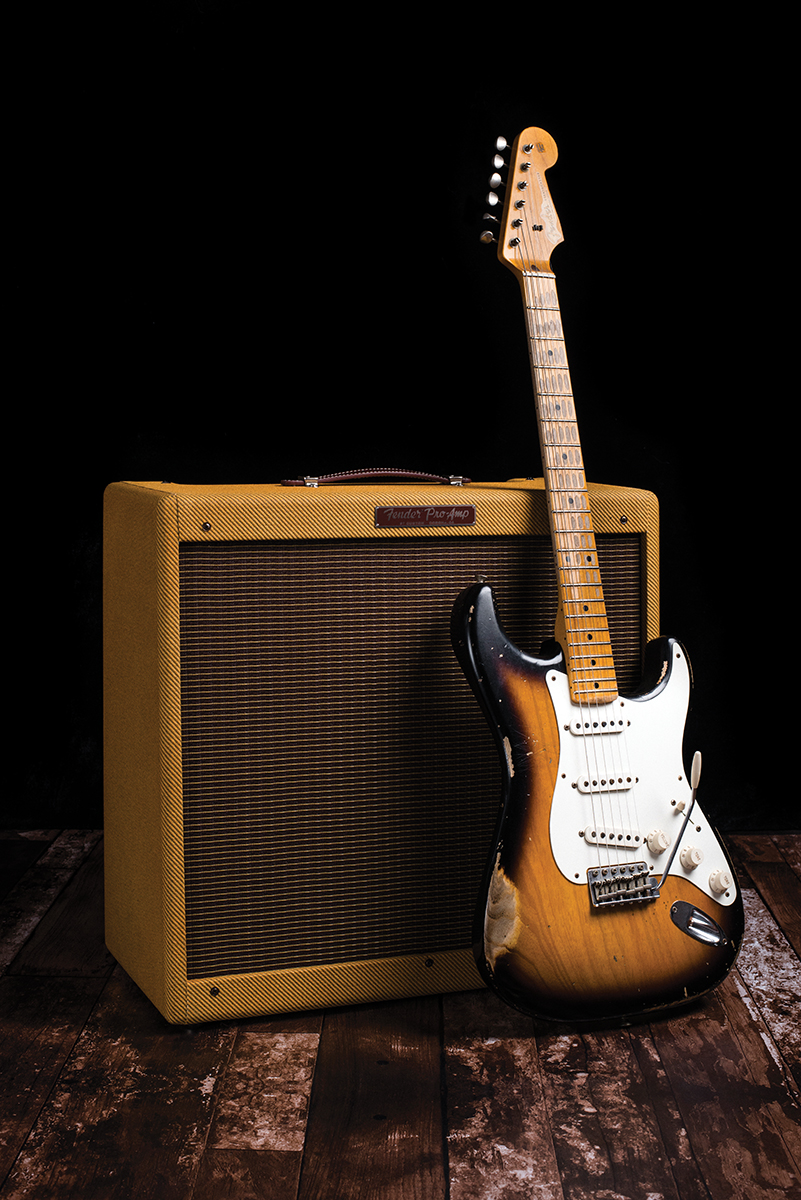 For a while during the late 1950s, Fender had a variety of amp models that were essentially the same amplifier in different sized cabinets with various speaker configurations. If you check out the schematics of the 5E4 Super, 5E7 Bandmaster and 5E5 Pro, you’ll see they are almost identical.

Where there are differences, they’re confined to the output transformers and one or two components in the bias and negative feedback sections. Of the three, the Pro occupies perhaps the lowest rung on the legend ladder.

The model Fender has chosen here represents an evolution of the simpler Pros of the early 50s and the controls hint at things that were about to pass at the twilight of the tweed era. Already the tone stack had evolved to a Baxandall-type configuration and negative feedback was being used with a presence control in the loop along with fixed bias.

Fender has stayed true to vintage spec with a 12AY7 in the V1 position. Period schematics also specify a 12AY7 for V2, but this reissue has a 12AX7. Since it’s a replica of a ’57 model, the power valves are 6L6s rather than 5881s (used from ’58 to ’60) and they get their juice from a 5AR4 rectifier valve. A period-correct 5U4 rectifier can be substituted for gain and feel that’s truer to vintage Pros and a 12AX7 can be used in V1 to hasten overdrive onset. 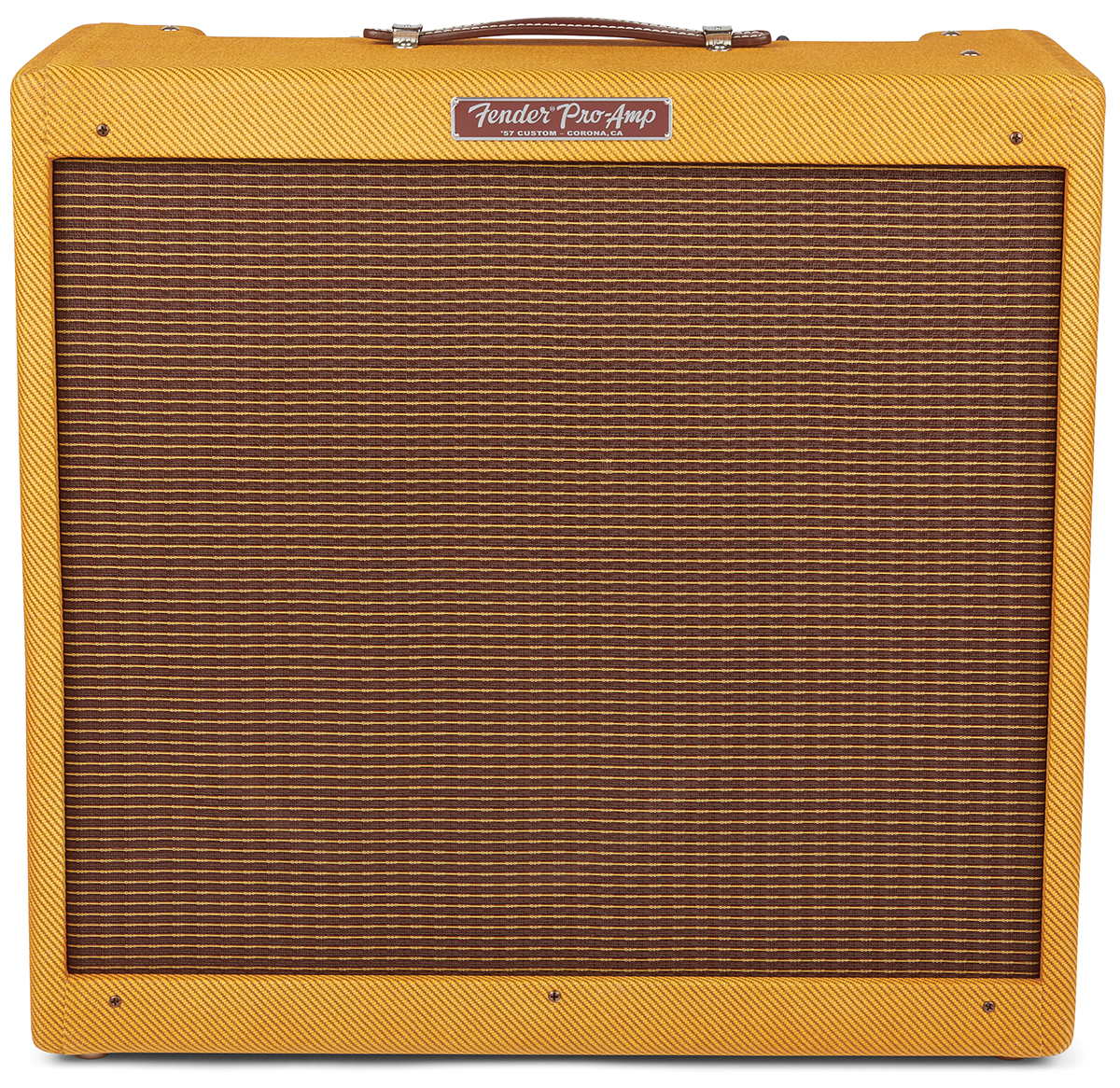 It’s fair to say that Fender feels less bound to vintage specifications than some boutique builders. Although the circuit is hand-wired on traditional eyelet board, the resistors are not carbon composite and plastic insulated hookup wire is used throughout in preference to cloth covered wire. Even so, Fender is using its own-brand yellow Astron repro capacitors made from craft paper, tin foil and resin – just like the originals.

The tweed has been coated to appear aged but not relic’d. Other modern features that are commonplace on Fender’s latest tweed reissues include rubber switch covers that resemble prophylactics and a metal box to shield the power valves and rectifier from damage. The output transformer also switches automatically to work at four ohms when an extension speaker is connected to the second jack.

The review amp is pictured with a plastic handle but a leather handle is also supplied. A vintage-style canvas cover is provided, too. Since tweed scuffs up quite easily, owners would be well advised to use it if they want to keep this amp looking new. 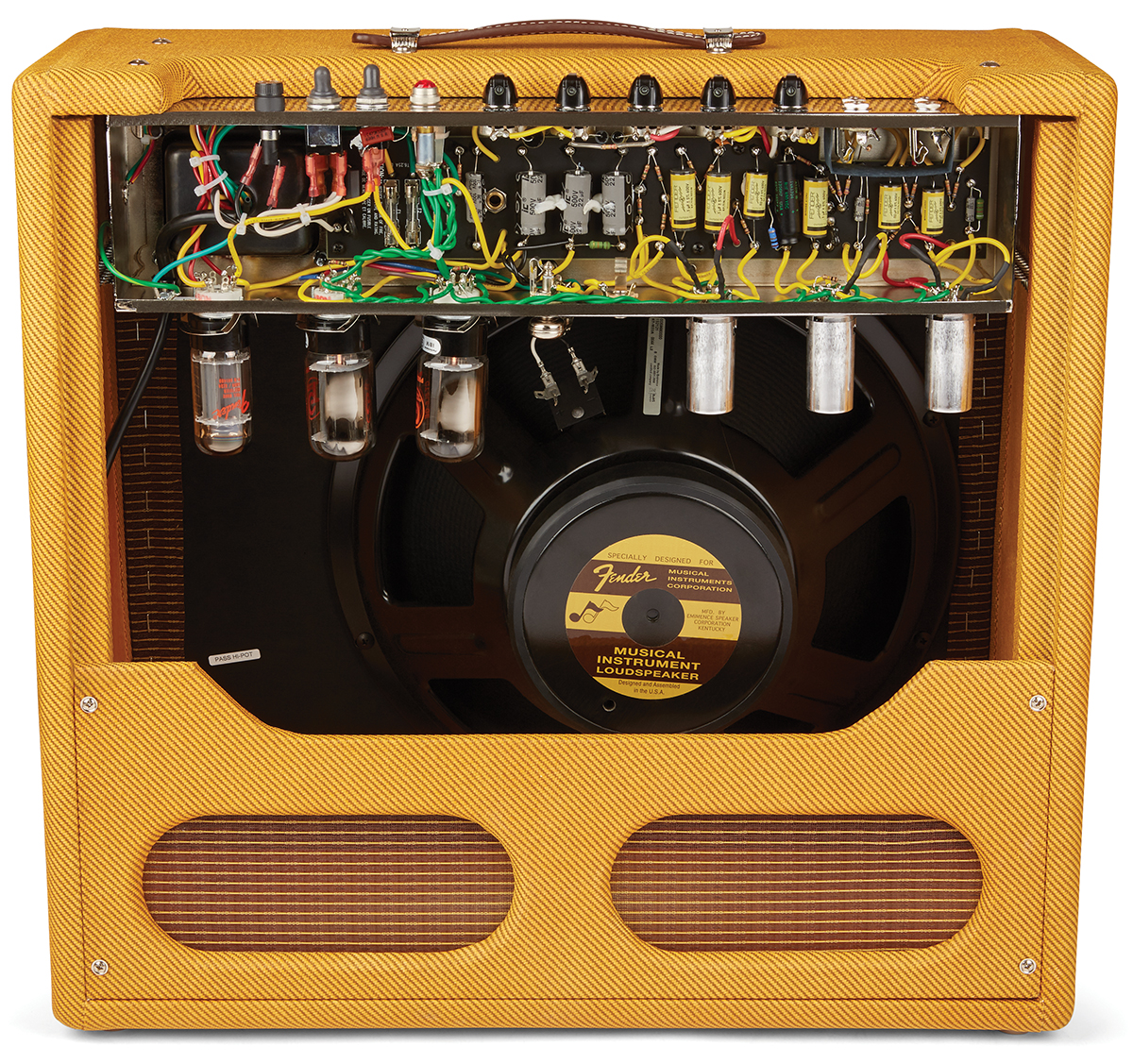 A 15-inch speaker has always been the tweed Pro’s distinguishing feature. Vintage examples shipped with a Jensen alnico P15N but this was often changed for a JBL. In common with Victoria’s narrow-panel Pro clone the 35115, Fender has commissioned Eminence to supply a 15-inch driver for the ’57 Custom.

When we reviewed Fender’s The Edge Deluxe in 2016 it seemed that the 5E3’s gain structure had been tweaked to deliver creamy overdrive at reasonable volumes. There’s no denying it was a pretty successful outcome in that regard, but for better or worse, the amplifier isn’t entirely ‘vintage’ in sound or function.

The sound and response of the ’57 Custom Pro is much closer to the vintage tweed amps we have come to know and love, but the 15-inch speaker is the main event and it sets the Pro apart from all other tweeds. A 15-inch diameter provides a lot of speaker surface area and tested against a 12-inch Fane A60 in our Rift PR18 cabinet, the Eminence sounds both louder and brighter. The large cabinet is clearly playing a part, too, because the Pro sounds huge through its own speaker and the room-filling qualities belie its modest 26-watt power rating. 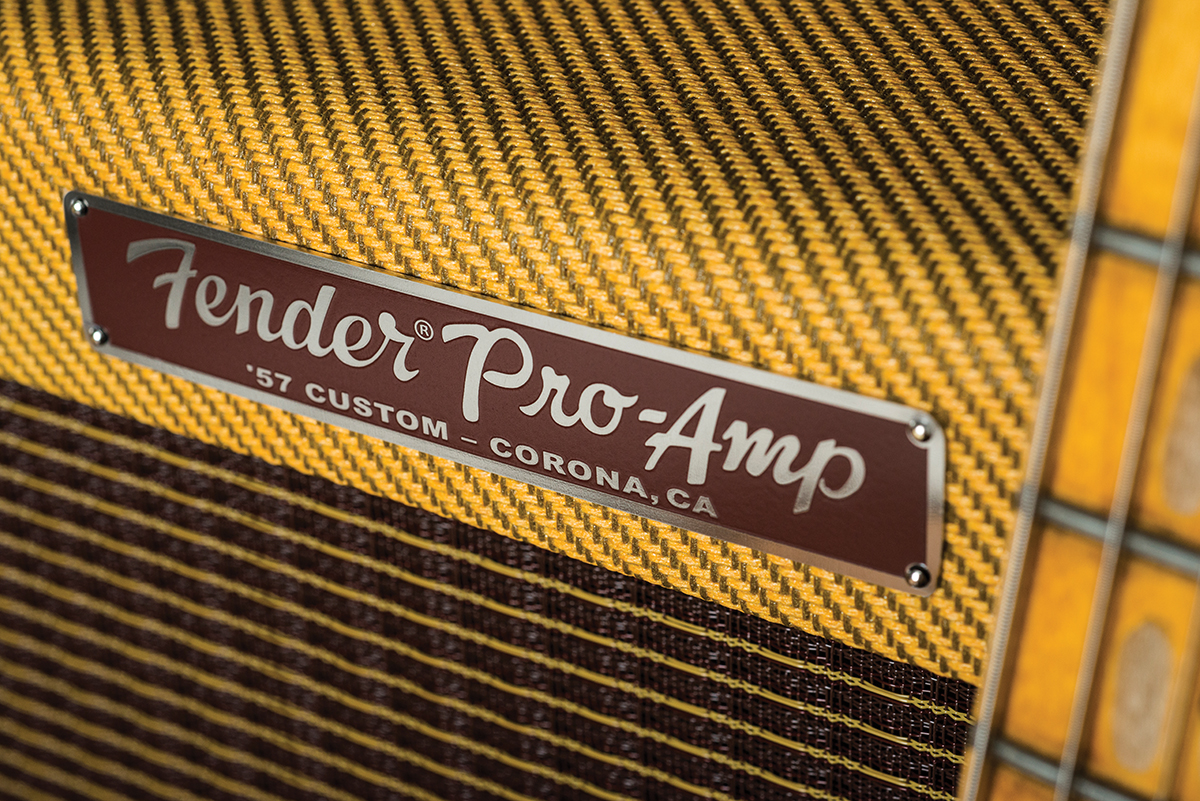 Since a tweed Pro and a Telecaster is regarded as a marriage made in heaven (aka Fullerton) that’s where we started. Some claim that 15-inch speakers lack treble but the Eminence brings out all of this circuit’s natural jangle, chime and cut. However, the high-end also retains sweetness even when the treble and presence controls are pushed way beyond half way.

At the other extreme the 15-inch ensures that there’s no chance of a Telecaster sounding wiry or lean. The bottom end is lusciously full and rounded without being too loose and the midrange is extremely clear and articulate. We also noticed that there was no transient spikiness, so pedal- steel licks on the back pickup need no compressor enhancement.
Even before the amp volume reaches halfway, a deliciously Stonsey overdrive and grind makes its presence felt. Bass string riffs punch through while treble strings ring over the top. Push the Pro just over halfway and the bass response softens as typical tweed fierceness creeps into the upper mids.

Above this it’s all ferocious overdrive, awesome sustain and harmonic bloom. Additionally the midrange thickens at higher volume with just a hint of cocked wah throatiness. You will also notice that the microphone inputs yield a slightly beefier and fuller tone than the instrument inputs. 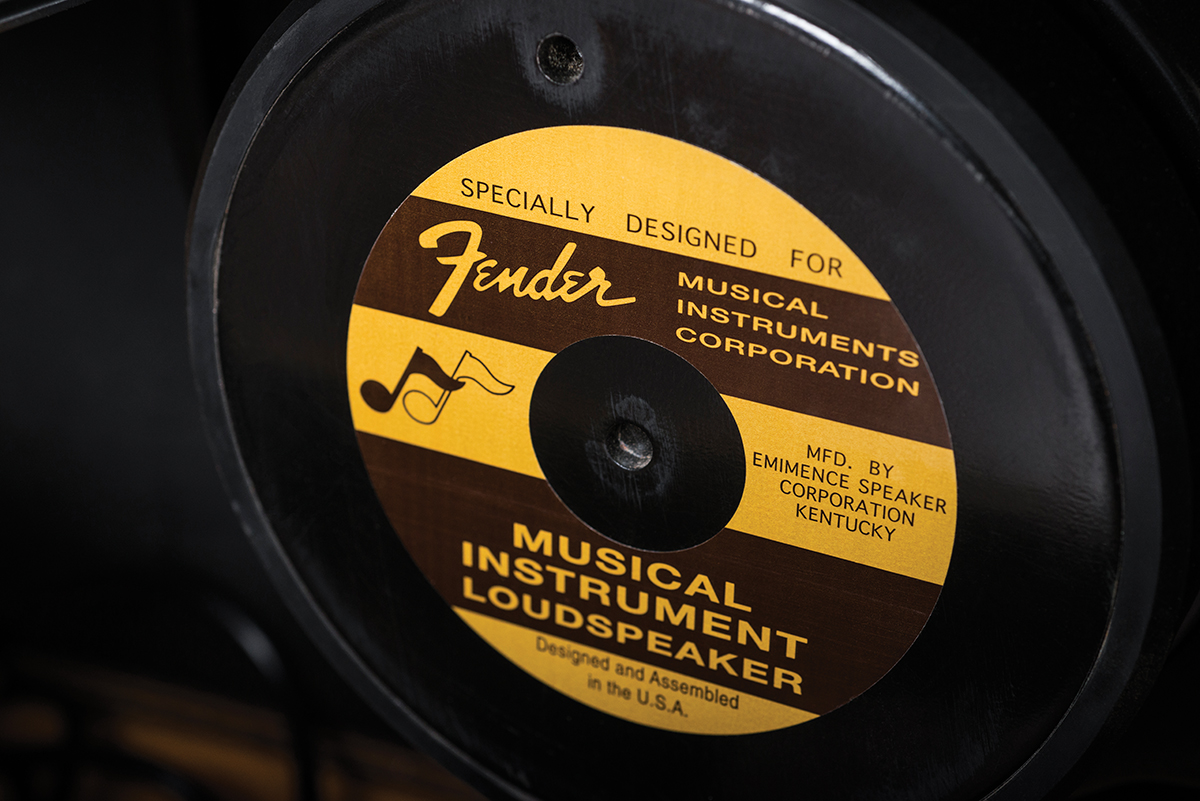 While we can unequivocally state that the Pro combines with Teles and Strats to stunning effect, changing over to a Les Paul reveals why some are less enamoured of 15-inch speakers. Even with brightly voiced Monty’s PAFs, the Pro’s bass end starts to struggle.

To be fair it’s mostly noticeable at high volume with the neck pickup selected, but things get a bit ragged and loose with the 15, while holding together just fine through a 12-inch. For rougher blues styles this quality may be regarded as an authentic asset, but for general playing with a variety of guitars, the Pro might not be the best all-rounder if you only plan to own one tweed.

However if you play a single-coil guitar in a three-piece band, it does fill out the sound in a way that smaller tweed amps, such as a Deluxe, never could.

The qualities that enhance one type of guitar may not suit another, but it’s the nature of the beast and shouldn’t be taken as a criticism of the Pro or its Eminence speaker. Far from it because by daring to stay (mostly) true to vintage specs, the result is almost certainly the most intriguing, exciting and best sounding of all the Fender tweed reissues we have tried so far. 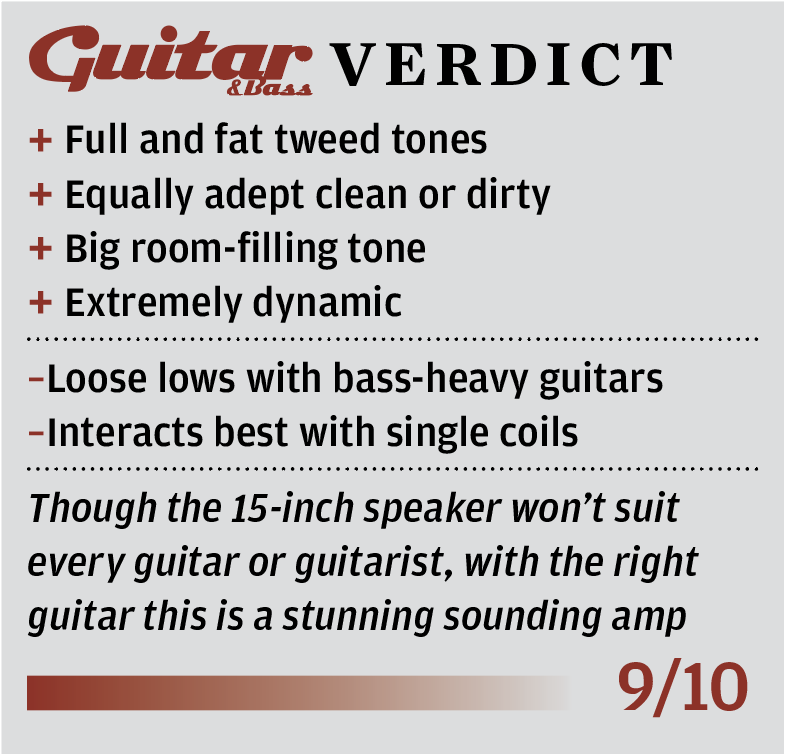