A hand-wired Deluxe Reverb with blackface AB763 innards and a solid pine cabinet is the reissue many players have been dreaming of.

The Fender Deluxe Reverb is great all-round amp that has found favour with countless country, funk, jazz, rockabilly and blues players. At 20 watts there’s enough clean headroom for most eventualities, but it’s sufficiently low powered to crank up for pub gigs and you can carry it with one hand.

What we have here is Fender’s latest recreation of one of its classics, and on first glance the ’64 Custom Deluxe Reverb looks like a mint and ultra-clean mid-60s amp – at least from the front. Even so, some may be concerned that Fender tends to ‘update’ the circuitry of its classic amplifier reissues. It might be suggested that there were reasons those amps became classics, so why not make bang-on vintage-correct replicas and be done with it?

The strength of that argument depends on the product in question, and it should also be noted that many of the vintage amps still being used out there have been tweaked along the way. Indeed, the Fender Deluxe Reverb is surely amongst the most modded of all amplifiers – and often with good reason.

With that in mind, makes sense that what we have here is a mixed bag of both original and non-original components. For example, although 60s-era carbon composite resistors aren’t used in this amp, it does have Fender’s Pure Vintage Blue Tone capacitors. These were created to mimic the Astron capacitors used in the originals. Reverse-engineered from the Blue Ajax capacitors that Fender phased in post-1962, the internals comprise the same combination of Mylar, tin foil and wax as the originals. 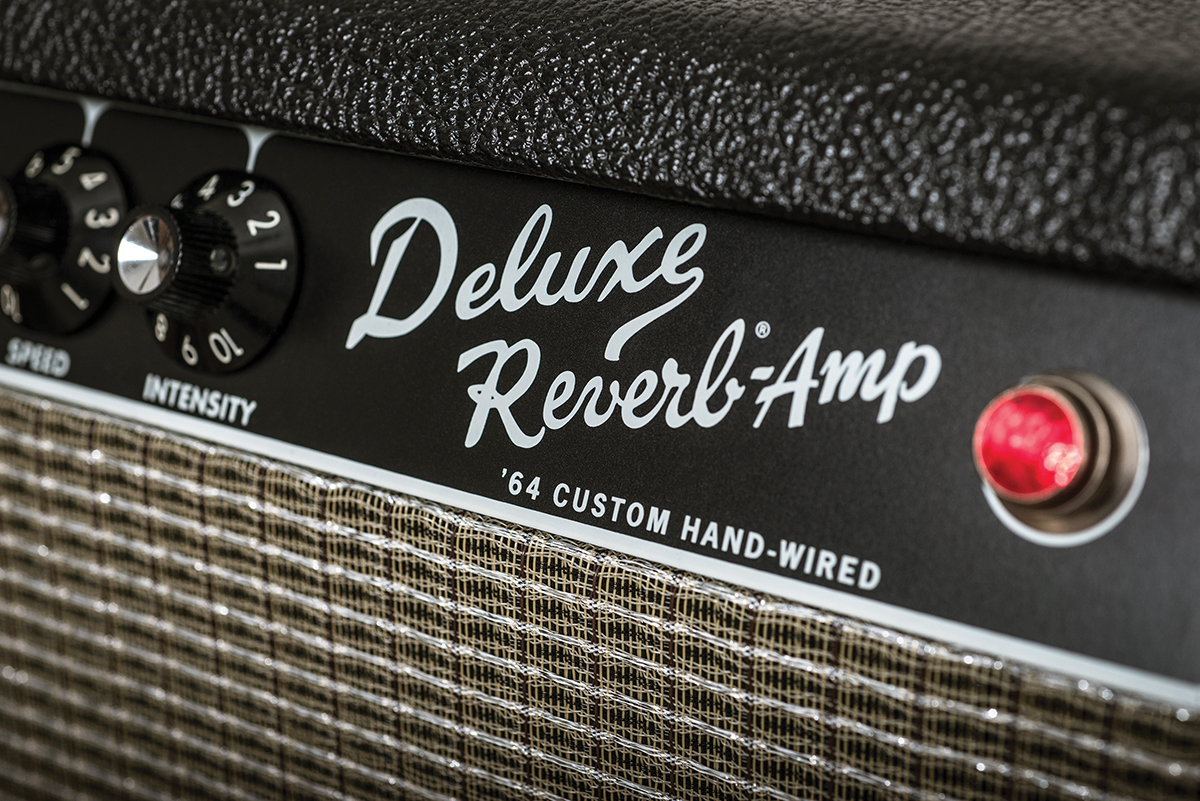 The ’64 Custom Deluxe Reverb also has concessions to the amp’s history of modding. Regardless of whether players were after more gain or extended clean headroom, one common complaint with this amp is that the fatter sounding ‘normal’ channel gets neglected because reverb is only available on the ‘vibrato’ channel. Fender has obliged by routing both channels through both the reverb and vibrato.

To facilitate this, the opto-coupler tremolo circuit has been reconfigured to a Princeton Reverb-style circuit that modulates the bias of the power valves. The channel voicing has also been tweaked to emphasise the difference in tones, with a 50pF ‘bright cap’ providing a tad more sparkle on the second channel.

According to vintage schematics, the vibrato channel always had an all-but-identical 47pF bright cap across its volume control, but perhaps Fender has altered the recipe elsewhere. Since both channels now have tremolo, the ‘vibrato’ channel of old has been re-named ‘bright’ while channel one remains ‘normal’.

The Groove Tube-branded valves include a matched pair of 6V6 power valves and a 5AR4/GZ34 rectifier. To comply with modern safety requirements, cages protect the power transformer and the larger valves. The look may be non-original but obviously it’s inconceivable that tone would suffer in any way. Our only complaint is that the valve cage obstructs access to the fuse holder.

Both inside and out, the build quality impresses with neat wiring, braided reverb cables and flawlessly applied tolex. The ’64 Custom Deluxe ships with a slip-over protective cover and a foot controller with switches for reverb and tremolo. 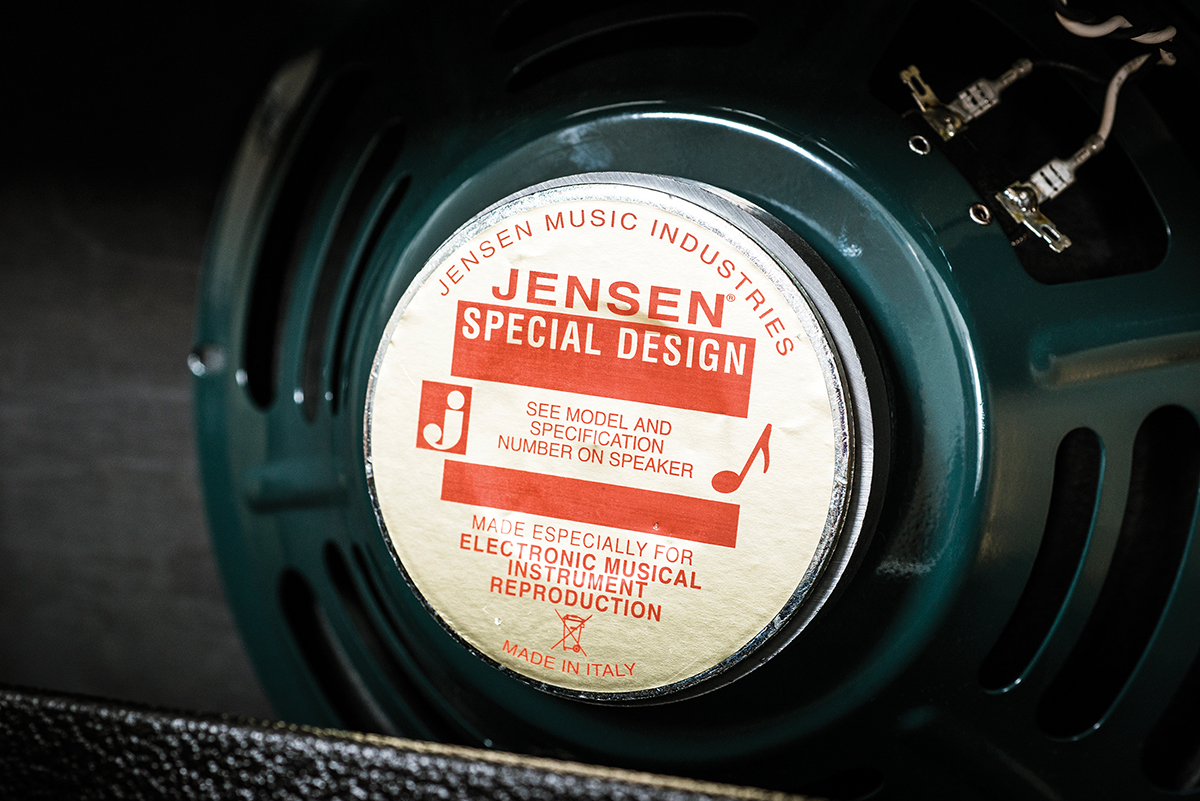 Both channels sound very similar. Set identically, the gain level and tonal character are basically the same. Only the bright channel produces the shimmery extended treble that we look for in this type of amp, although the same result could be obtained with a single channel and a bright switch.

However, with an external channel switcher, you might consider setting the normal volume higher for thick overdrive while running the bright channel on the edge of breakup for chord work and cutting lead lines.

Strat pickups begin pushing the amp’s bright channel into overdrive with the volume control set between four and five, and the amp’s sensitive response allows you to control the amount of drive through your playing dynamics alone. Swapping over to low-ish output PAFs, overdrive begins around a volume level of three.

Thanks to the larger cabinet, the Deluxe Reverb has a bigger and more room filling presence than a Princeton Reverb. Sticking with the Strat and cranking up the bright channel volume, quickly edges you towards a certain Texas tone. It’s thrilling stuff as the power supply begins to sag, the mids get chewy and single notes drift into singing sustain. The Jensen C12Q ceramic speaker has a massive influence on the tone and dynamic response. At the highest volume levels, the bass end gets loose and a tad spongy, but we find that more enjoyable for rootsy playing styles than stiff lows.

Since the effect isn’t apparent until the Deluxe Reverb is overdriving heavily, cleaner country pickers and fingerstylists will appreciate the subtle and natural compression that the circuit and speaker combination provide. We also find this circuit brings out the best from Fender-style single coils and Filter’Trons, but humbuckers can sound a bit bland.
Comparing the speaker to a Celestion G12 Greenback – a popular DR retrofit – we think the Jensen is a better fit. It softens the attack, sounds smoother in the upper mids and enhances overdrive with sweet and complex harmonics. 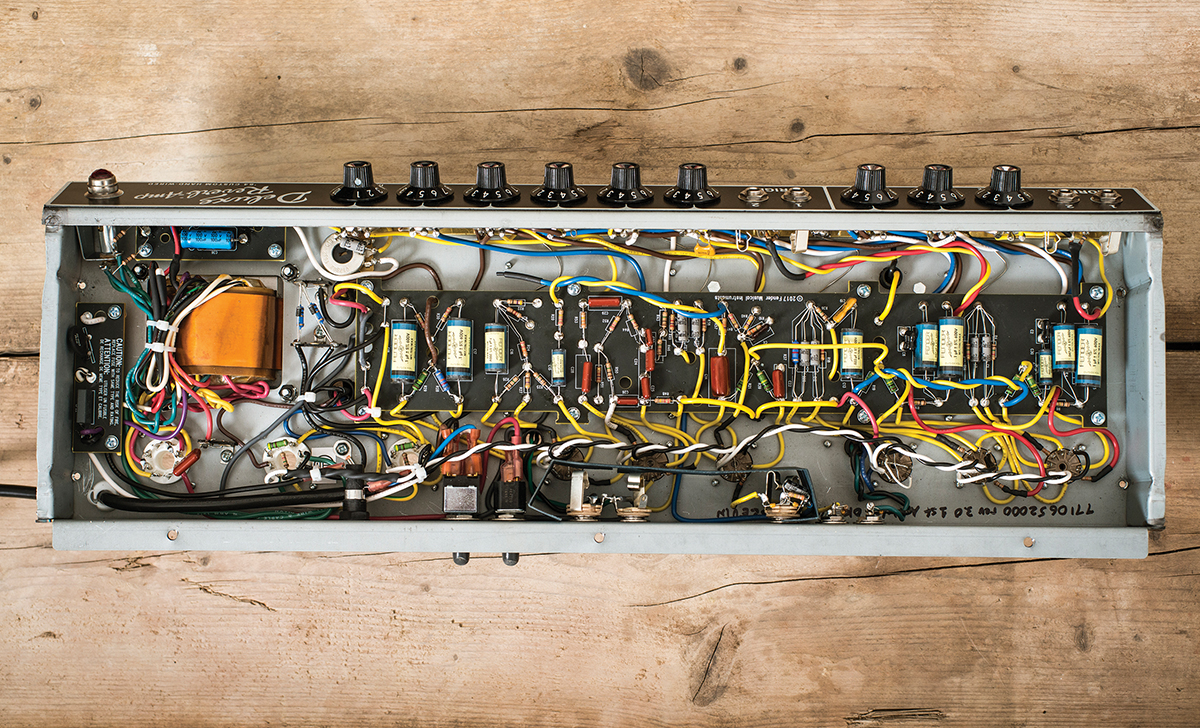 The overall tone of this amp is hugely enjoyable and versatile. There’s some noticeable hiss – sharing the reverb over two channels created a similar issue with the Custom Vibrolux Reverb Reissue from the mid-noughties and we wonder if it’s a similar story here.

Our review amp also produces a rapid chugging sound that’s unrelated to the tremolo, but thankfully it’s not audible when playing.

Besides that, it’s all good. We particularly like the way that the midrange isn’t scooped out excessively by the tonestack.

Additionally, the mids fill out as the volume is cranked and the bright cap’s influence lessens. Thereby harshness is automatically avoided at high volume without any need to adjust the treble control.

The tremolo isn’t the deepest we’ve heard and compared to some modern amps the upper speed range is a bit restricted. If that’s vintage-correct, then so be it and we do like the rise and fall characteristic. The reverb fares better and it’s everything you could ask for from a vintage-style, tube-driven Fender reverb – complete with that narrow window between too little and too much.

Compared to a 1972 Deluxe Reverb we used to own, this amp breaks up sooner and has far greater touch response. The differences are probably attributable to the circuit changes Fender introduced at the end of the 60s, but if that silverface amp had sounded more like this blackface model, it would never have been sold… 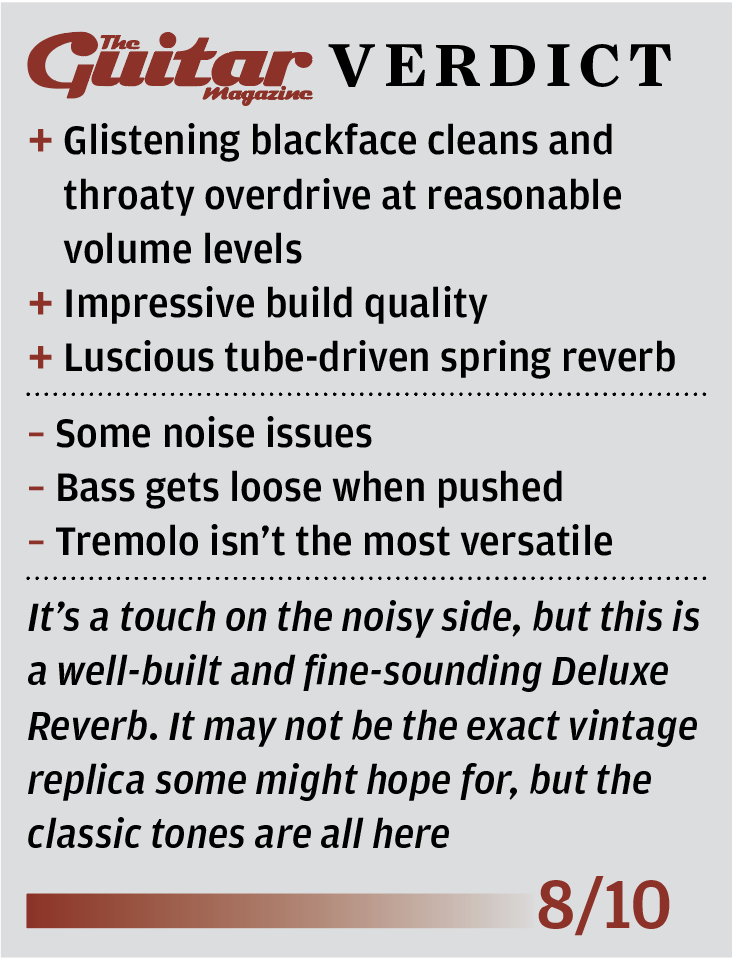