“A new breed of sound that words can’t describe,” says Fender. This might be the shortest review that Chris Vinnicombe has ever written… 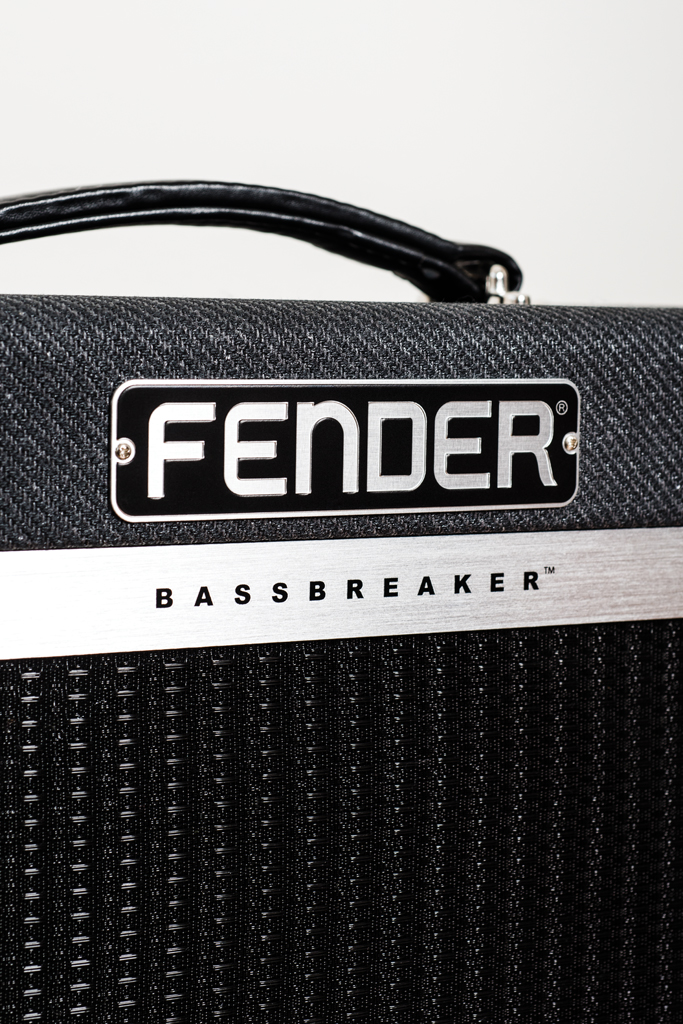 After a teaser campaign, Fender’s Bassbreaker range was officially announced at the end of 2015 and launched at Winter NAMM 2016 in Anaheim. Seven decades have passed since the arrival of Leo Fender’s first `Woody’ amps, but a peek at the multiple PCBs and ribbon cables inside the new models here reveals that plenty has changed about the way FMIC makes amps in the interim.

Change is of course central to the story of Fender amplification, but the Bassbreaker range (which also comprises the larger 18/30 and 45 units) playfully imagines a “parallel evolution” in which Fender got dirtier rather than cleaner in the 1960s, and as a result sounded more like the amps from this side of the pond that powered the nascent rock genre using circuits based on those developed by Fender in the fifties.

It’s an interesting idea, and the cosmetics also draw on the company’s illustrious heritage with an update on the 1948 `block’ logo and a dark grey tweed covering that looks really smart in the flesh. The 1×10 007 combo (also available as a head for £210) is a single-channel, master volume affair with a built-in treble booster. The 15 head (also available as a combo for £470) is more complex, with three voices and onboard digital hall reverb. Both use EL84 power valves and Celestion speakers for a more mid-Atlantic accent than a traditional Fender. Time to plug in…

Turning first to the Bassbreaker 15 mini stack, with the master set high and the gain around 10 o’clock in low-gain mode, the clean sound is rather dark but, happily, engaging the bright switch lifts the blanket and shifts the voicing into more neutral territory. It’s still a little boomy, but rolling the bass back to 10 o’clock and the mids up to three o’clock, while leaving the treble flat, creates a nice clean `base’ sound with a little bite when you dig in and a sprinkling of EL84 chime for chord work. Add a clean boost into the equation and the amp starts to drive nicely. There’s a little background hum but nothing obtrusive. 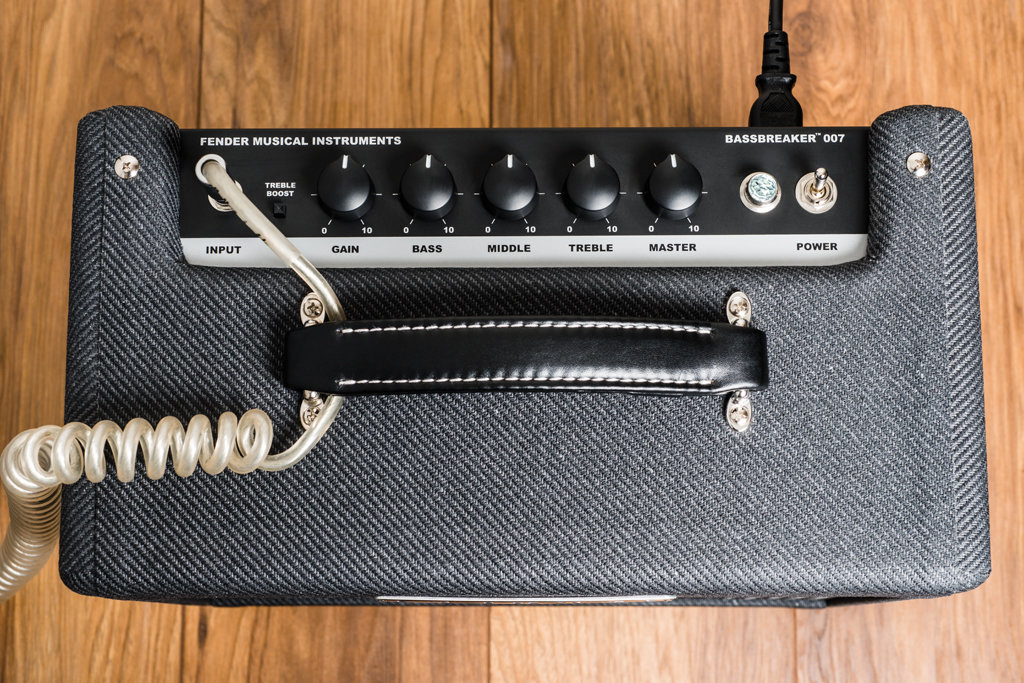 What a difference a cab makes; wondering why engaging the bright switch seemed essential leads us to try the head through our own compact pine 1×12 loaded with an Eminence Red Fang alnico speaker, and this changes the complexion entirely. Rather than getting the feeling that the amp’s natural voice is fighting against a woolly cabinet, now those clean sounds really sing, with sweeter and more complex harmonic content negating the need for the bright switch.

Bass is still plentiful and we simply roll back the middle a notch from where we had it set to achieve the desired amount of treble. Pushing up the gain to halfway increases the volume considerably and adds sustain, though we’re still in something more like aggressive clean territory than overdrive and there’s no real crunch yet. Winding the master down from band to bedroom levels, it’s clear that power stage compression is a big part of what we’ve just heard. 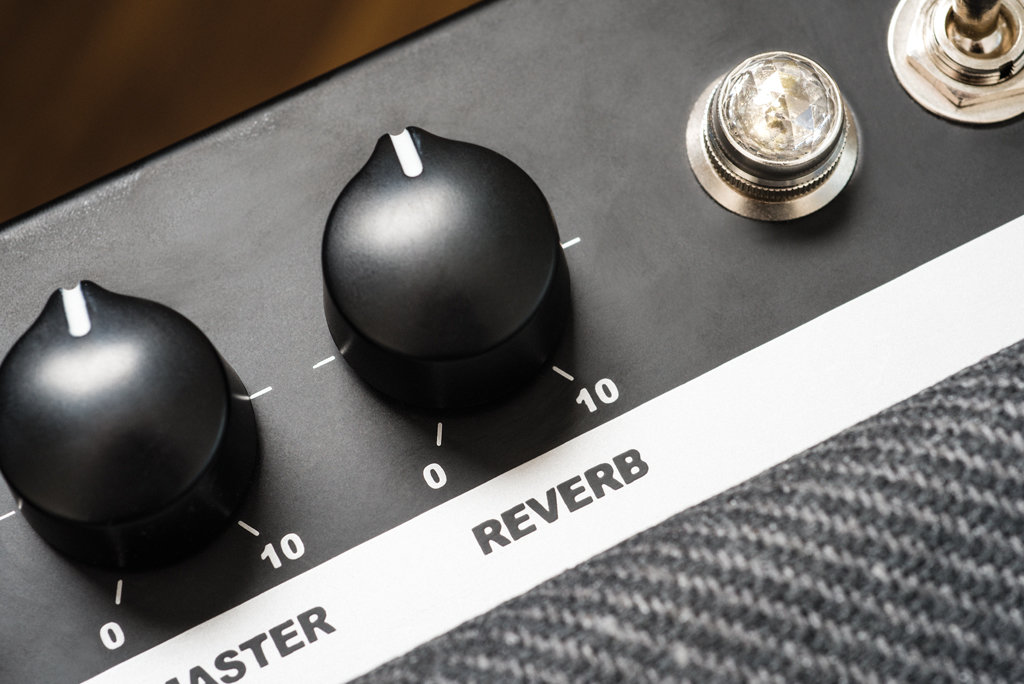 The onboard hall reverb isn’t the most sumptuous or organic: after an initial wash of short repeats, the effect tails off abruptly. The wetter the signal is, the more hiss is introduced, too. Given choice, we’d have opted for a digital algorithm modelled after a classic Fender spring reverb, but effects junkies are furnished with an FX loop so they can bring their own ambience.

Winding the gain up full – it’s really pushing some air now – and cranking the middle control yields our favourite sound so far: it’s cutting and raunchy with elements of sixties Marshall and fifties Fender in the stew. Boogie-rockers on both sides of the pond will get a lot of mileage out of this – it’s great for Keef, Joe Perry, Faces or Black Crowes tones, but if you like your rock bands a little more straightahead it moves into latter-day Foo Fighters territory too, especially with the master up high and the power amp working hard.

The Bassbreaker 15 is quite a lot of amplifier already, with perhaps enough range for players who favour drive pedals for lead work. When you flip over to the medium-gain setting on the structure control, this is where your early Foo Fighters and Green Day – not to mention AC/DC and GN’R rhythm – sounds live, again straddling an imaginary line somewhere over the Altantic. This time, despite the EL84 power valves, there are hints of cranked Blackface Bassman and hot Plexi-type tones.

The bottom end holds together well for American punk palm muting, and with the gain and master pushed this thing gets pretty damn loud for a 15-watter running into a 1×12. Again, we like it best with the mids pushed nearly all the way up. In this context, it’s clear that the BB112 cabinet is far, far happier and seems to be complementing the sound rather than inhibiting it. 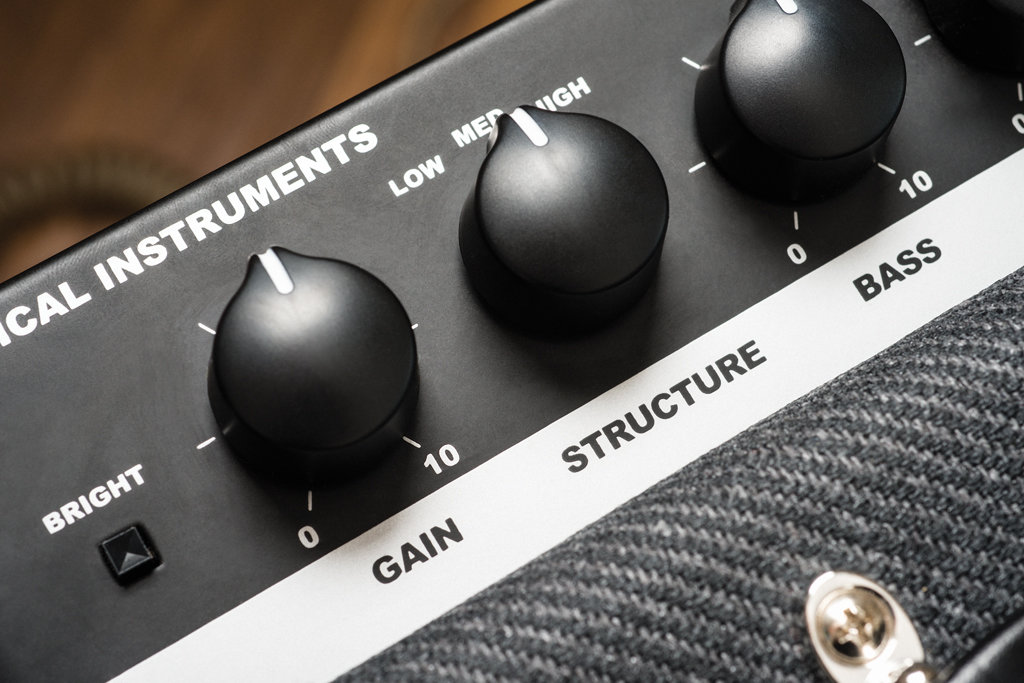 And then there’s the high-gain mode. Yikes. The biggest, baddest and loudest sound on offer makes you start to question this amp’s 15-watt rating, as it’s a huge voice with big bass, but the tightness and definition to handle drop D chugging, heavy alt.rock such as Biffy Clyro and even Lamb Of God-style metal riffing.

Again, though, it sounds best with the mids pushed. Fender has experimented with high gain before, of course, but this is probably the company’s most credible attempt so far (without an EVH badge on it) at the kind of tones that wouldn’t be out of place at Download Festival. With the master and gain maxed out in high-gain mode, the attack isn’t as fast as it might be with a bigger power stage, but fast, palm-muted parts hold up better at the bottom end than they have any right to – and the cabinet definitely helps.

Switching over to the 007, it’s clearly a very different amplifier but shares some common issues with the cleaner end of the 15 in that the cabinet and speaker seem to work against the more vintage side of its personality, though in this case there’s a little extra boxiness. 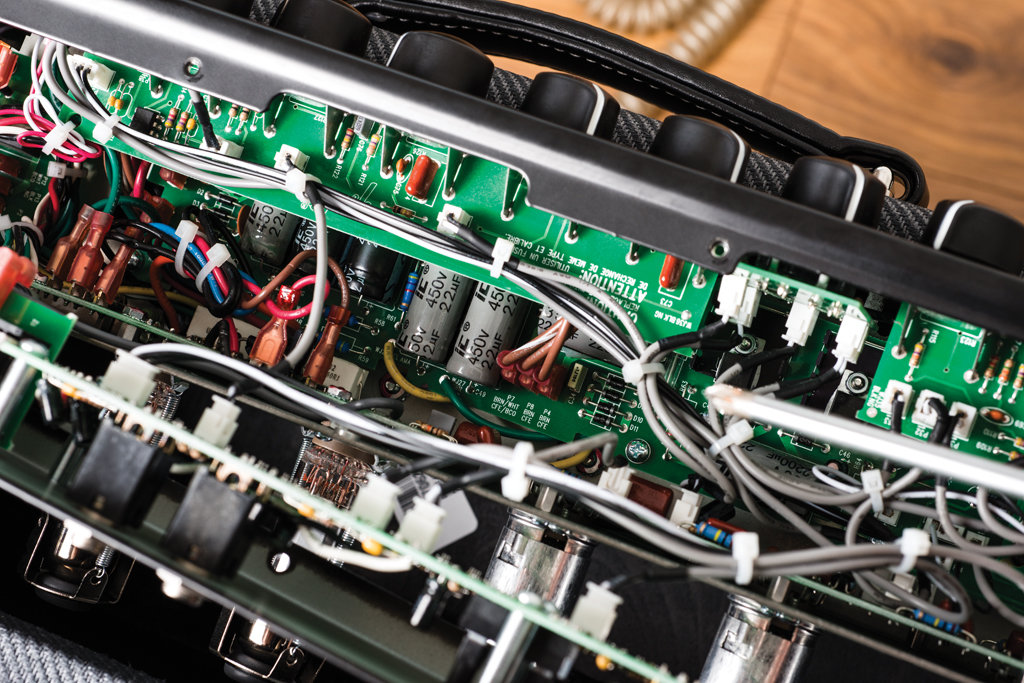 Again, we prefer our own pine extension cab with an alnico speaker, and this really helps tease some excellent, almost boutique-style EL84 tones out of this amp. Don’t expect clean sounds that compete with a drummer unless your drummer is a six-week old kitten, but there are many other Fender amps for that and nevertheless there’s loads of delicious raunch with a chimey high end that rewards digging in and has us rolling out riffs from Revolver-era Beatles, The Kinks, more recent power-pop and alt-country.

With the master and mids cranked and gain at 9 o’clock, it’s the kind of touch-sensitive experience you either have to push a Vox into the red or go well into four figures in the boutique market to get. There’s a little more hum than is ideal, but we’re having too much fun digging in to care.

Through the combo’s own speaker, it loses some high-end complexity; it’s a little more lo-fi overall but cool and Kinks-y nonetheless. Kick in the treble boost and you’ll want to roll back the mids to 12 o’clock to avoid fizz and eyeball-slicing high-end. With that done, it’s a cool voice that’s great for incisive Sgt Pepper-style fuzzy lead tones and even Neil Young flavours.

The marketing blurb states that this is `a guitar amp for players who crave traditional Fender cleans and dare to unleash their dirty side.’ That doesn’t quite ring true, as this isn’t the amp for the former but, with the right speaker, it generates some very enjoyable sounds that flirt with classic EL84 (at the lower end of the gain spectrum) and tweed tonality (at the higher end) without the crazy volumes or pricing. 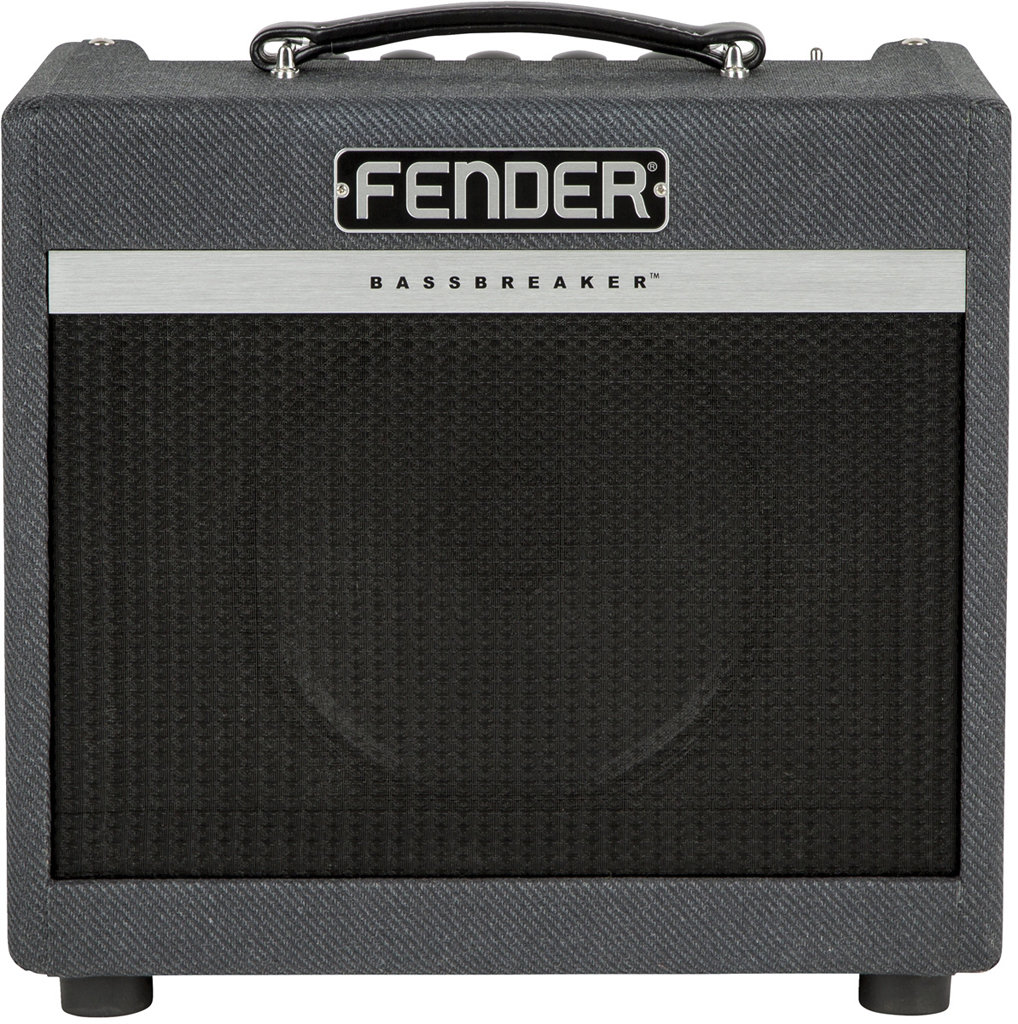 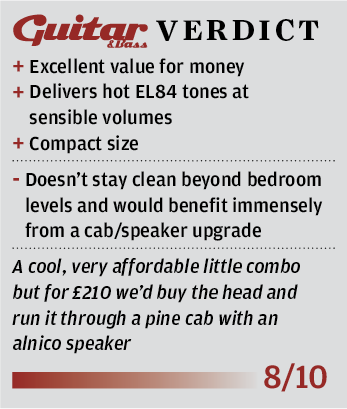 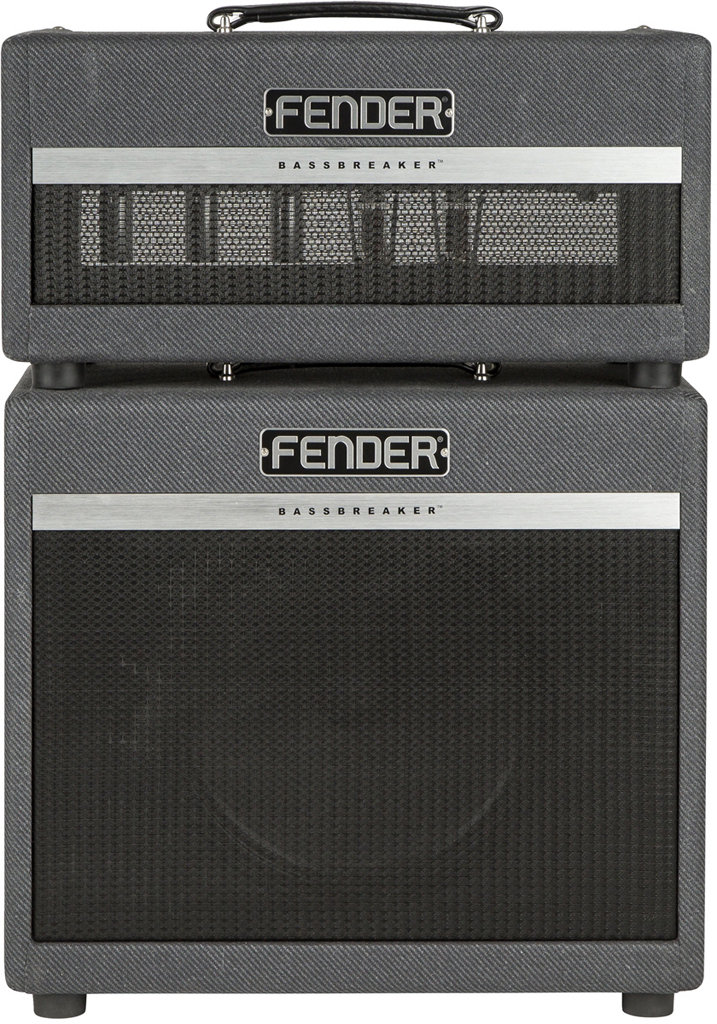 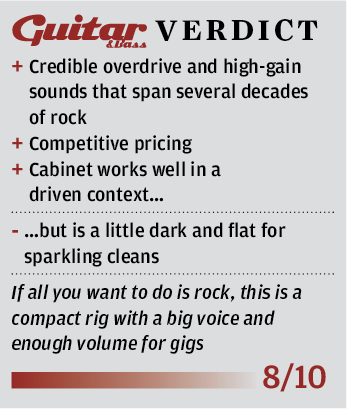