Student guitars reinvented for a new generation? Chris Vinnicombe gives them a workout…

If you’ve spent any time browsing guitar gear on your smartphone or computer lately – and let’s be honest here, it’s all too easy to get into the habit of looking at pictures of other people’s guitars more often than you pick up and play your own – then you may have noticed that there’s a whole generation of players out there who have invested more money in the process of assembling a pedalboard than they have in buying either their guitar or amplifier.

When it comes to guitars, like the alternative-rock and grunge guitarists of the late 1980s and early 90s that blazed a trail for them to follow, many hip modern-day experimentalists and indie noiseniks turn to Fender’s less mainstream designs for inspiration. You don’t get to be one of the biggest fish in the pond without street smarts, and you can be sure that Fender has noticed that not only are the likes of the Jaguar, Jazzmaster and Mustang enjoying a second renaissance, there are also plenty of boutique builders taking an offset slice of Fullerton pie. 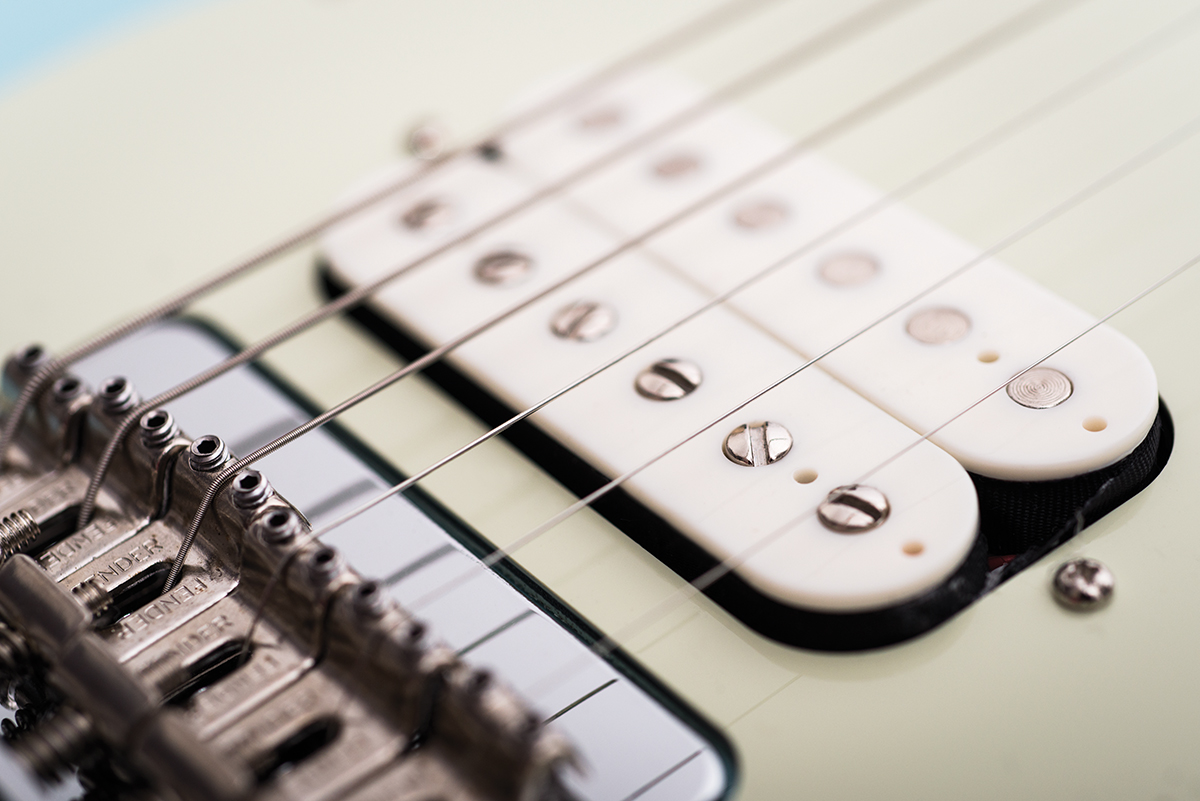 Fender’s response to competition and demand? Launch a slew of cool new models at a made-in-Mexico price point that’s hard for the guitar-buying public to resist and impossible for smaller builders to compete with.

In this instance, market forces have helped to create products with plenty of personality. On their launch at Summer NAMM in Nashville in June, like many other of the show’s attendees, we – complete with jetlag, artisanal hangovers and the sound of loud country music still ringing in our ears – saw the new-for-2016 Offset series in its attractive rainbow of colours hanging from the wall of the Fender booth and thought that it was good.

The Offset range comprises a pair of Mustang electrics – one with a maple ’board and the traditional pair of single coils, the other a ‘Mustang 90’ featuring a rosewood ’board and a pair of P-90-style pickups – a Mustang Bass PJ with Precision and Jazz Bass pickups and two Duo-Sonics, one with two single coils and the HS model with, you guessed it, a bridge humbucker and necksingle coil. 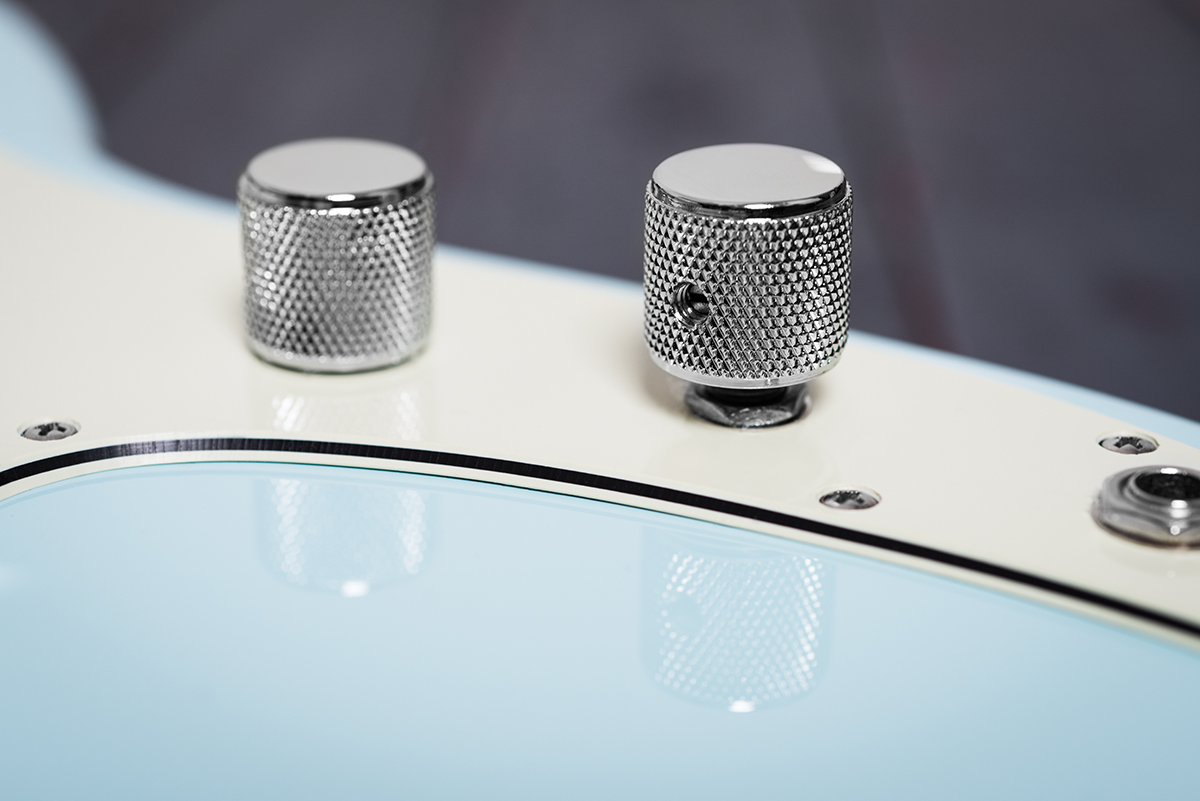 That is all fine and dandy except for the fact that the Duo-Sonic isn’t actually an offset-waist design. Although visually similar to a Mustang, Fender’s 2016 Duo-Sonics echo the model’s original 1956 body shape with a waist that’s higher on the bass side and much closer to symmetrical than the Mustang’s, which is a true offset.

We confirmed this fact by drawing around the bodies of our review guitars on a roll of wallpaper with a Sharpie and then comparing the outlines.

Just to confuse matters further, Fender redesigned the Duo-Sonic in 1964, renamed it the Duo-Sonic II and switched to the same body shape as the Mustang, itself newly launched that year. The Duo-Sonic also got a larger, Mustang-style headstock as part of the makeover, but Fender has opted to use each model’s original headstock shape for 2016. Although all pre-64 Duo-Sonics had a 22.5-inch scale length and it remained an option right up until the model was discontinued in 1969, the full 24 inches is mandatory today.

For the purposes of this review, we selected the Mustang 90 and Duo-Sonic HS, along with the Mustang Bass PJ. The six-string electrics share Strat-style hardtail bridges with bent steel saddles and similar C-shaped, satin polyurethane-finished necks with 22 medium-jumbo frets and 9.5-inch fingerboard radii. The Mustang Bass PJ’s Jazz Bass-style 38mm nut width combined with a very similar neck depth to the guitars make it feel very much like a member of the same family, while the 30-inch scale makes getting around the 19 medium-jumbo frets a breeze, even for guitarists.

Descended from student models they may be, but all three of these instruments are compact, robust and optimised for high-energy stage performances. The build quality is consistently neat across the range, and we find very little to complain about, especially in this price bracket. 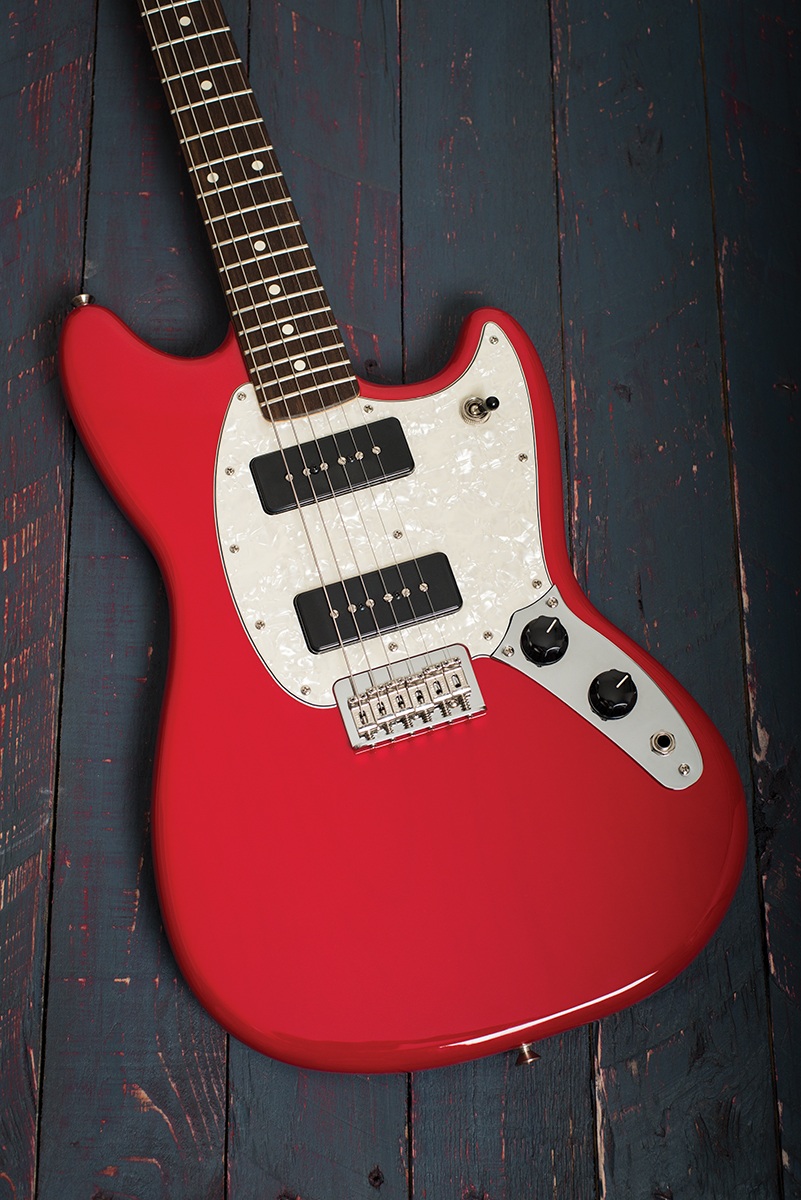 Out of the box, the Mustang 90’s jack socket doesn’t grab hold of a jack plug quite as tightly as it should, resulting in a little bit of unwanted movement and a few coughs and splutters. Thankfully, it’s a quick fix, made even easier by most of the wiring being situated on a separate plate held in place by just three screws – there’s no slackening of the strings required to gain access.

In use
Using a fairly ballsy Telecaster into a blackface amp to orientate our ears, then switching over to the Mustang 90, there’s an immediate hike in output, with much more emphasis on the lower-mids and a bigger bottom end.

It doesn’t feel lacking in sustain, either – it’s thick and chewy when you add gain and would make an excellent foil for a guitar with spikier-sounding single coils in the same band. There’s still plenty of treble and attack, especially with edgier amp tones or a dirtbox, but the Mustang 90 manages to avoid eyeball-slicing shrillness easily. 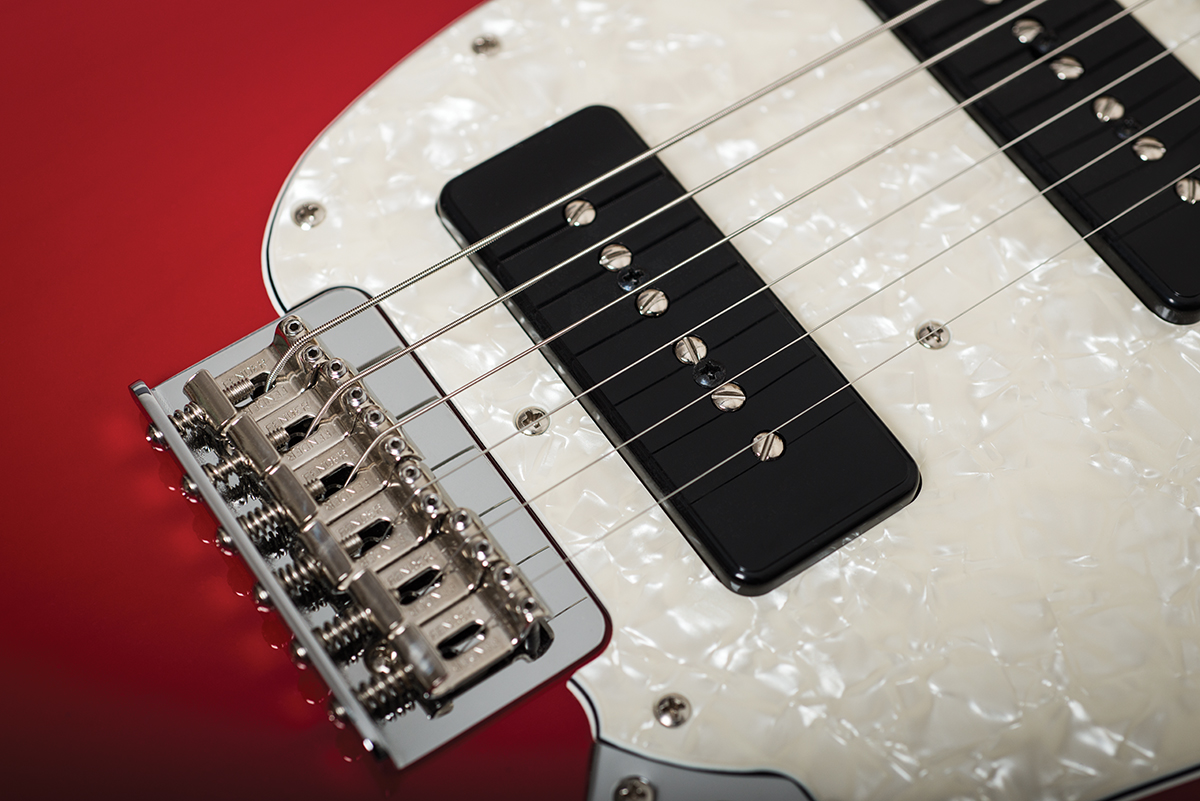 When played clean, the middle and neck pickup settings are surprisingly rich. The midrange is a little too pronounced for Johnny Marr-esque clean chime, but there are a lot of cool tones here in a compact package. It’s funny how certain instruments draw a direct line to a specific area of influence: suddenly we’re in the realms of Pacific Northwest indie bands such as Death Cab For Cutie, combining pretty arpeggios with movable chord shapes, droning pedal notes and plentiful dissonance. 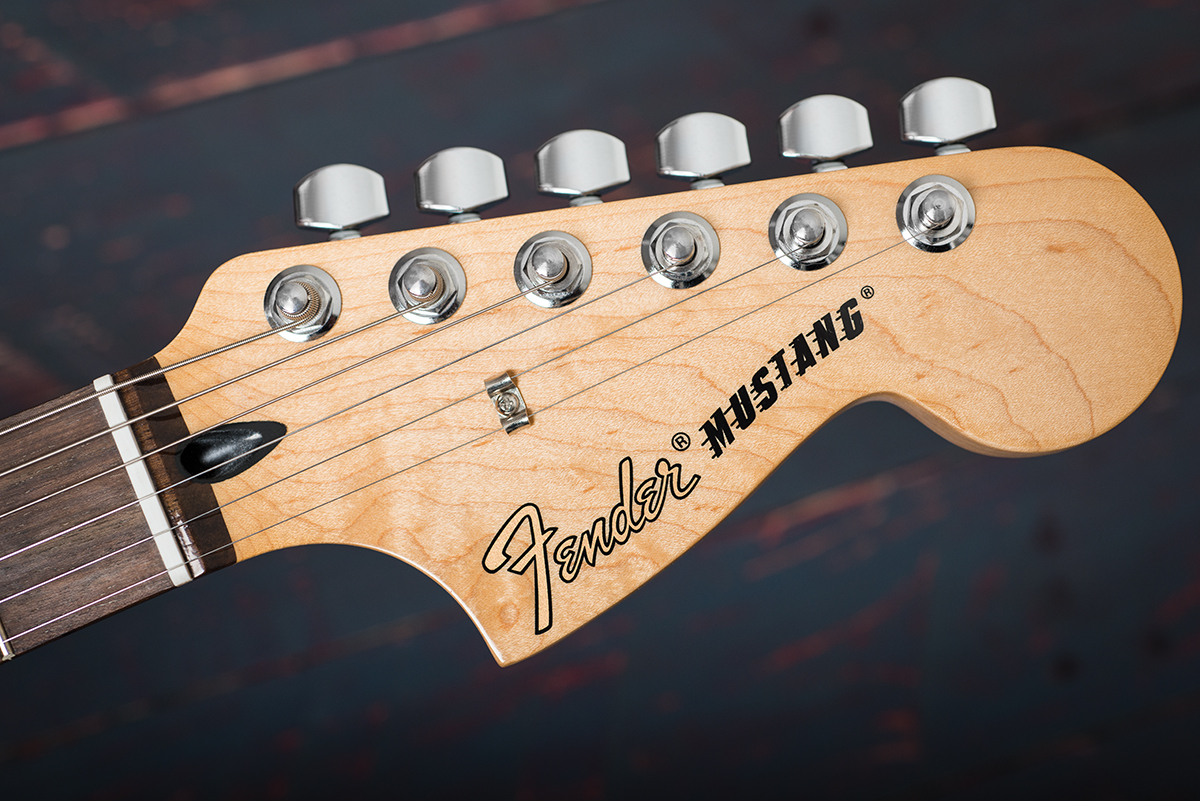 The Duo-Sonic HS is immediately more brash, with a natural jangle and more air. The neck single coil delivers plenty of snap, while pulling the tone pot splits the bridge humbucker for hollower, springier single-coil sounds. It suits funkier and choppier styles, and the Duo-Sonic’s brighter attack is closer to what we’d expect from a Fender of this size and scale length.

In contrast, the Mustang 90 has a surprisingly sweet voice for bluesy noodling, so it might be the logical step into the short-scale offset camp for a player from more of a blues-rock background. 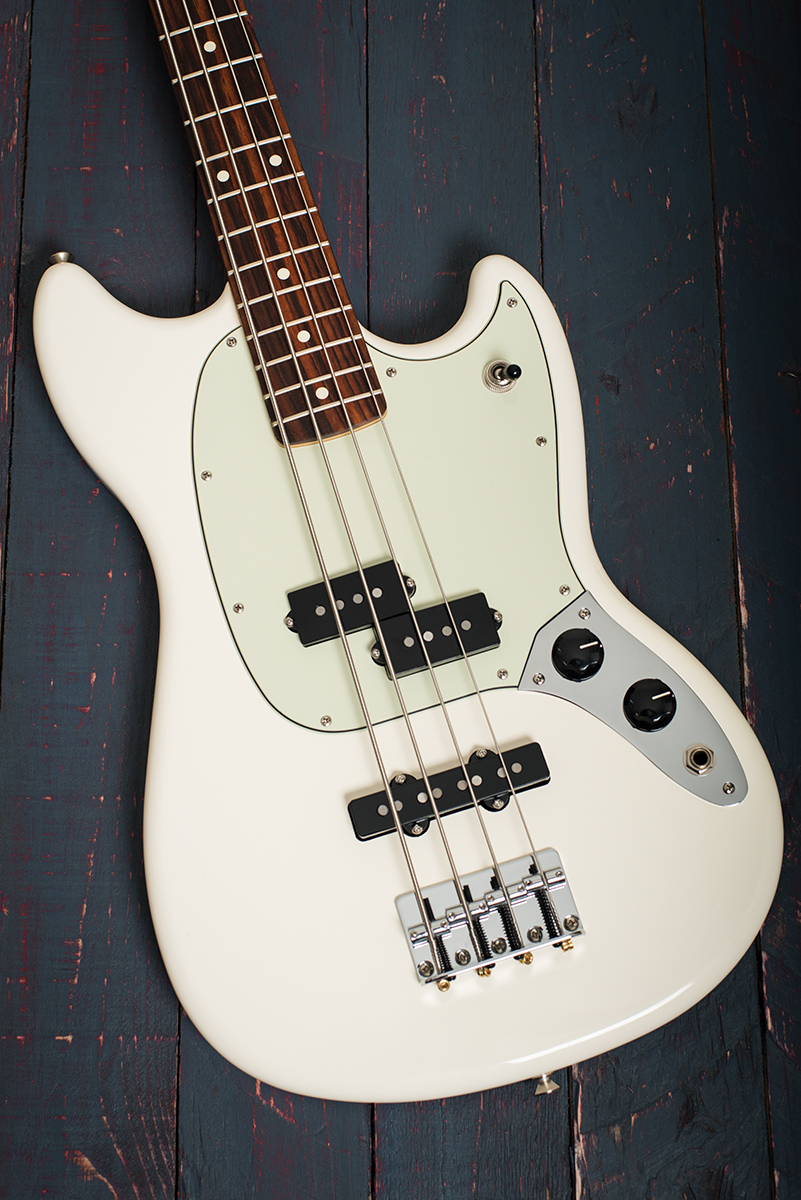 Given the Duo-Sonic’s appearance, readers of a certain age and persuasion will understand why we couldn’t resist plugging in a distortion box and busting out some Nirvana riffs – the humbucker is certainly strident enough for the task and it really does wind back the clock to making a racket in cold garages while wearing flannel shirts and dirty Converse daps. Arguably, over time, only the choice of rehearsal space has improved…

The Mustang Bass PJ is a little headstock-heavy when strapped on, but its compact proportions, slim neck dimensions and short scale more than make up for it when it comes to playability. 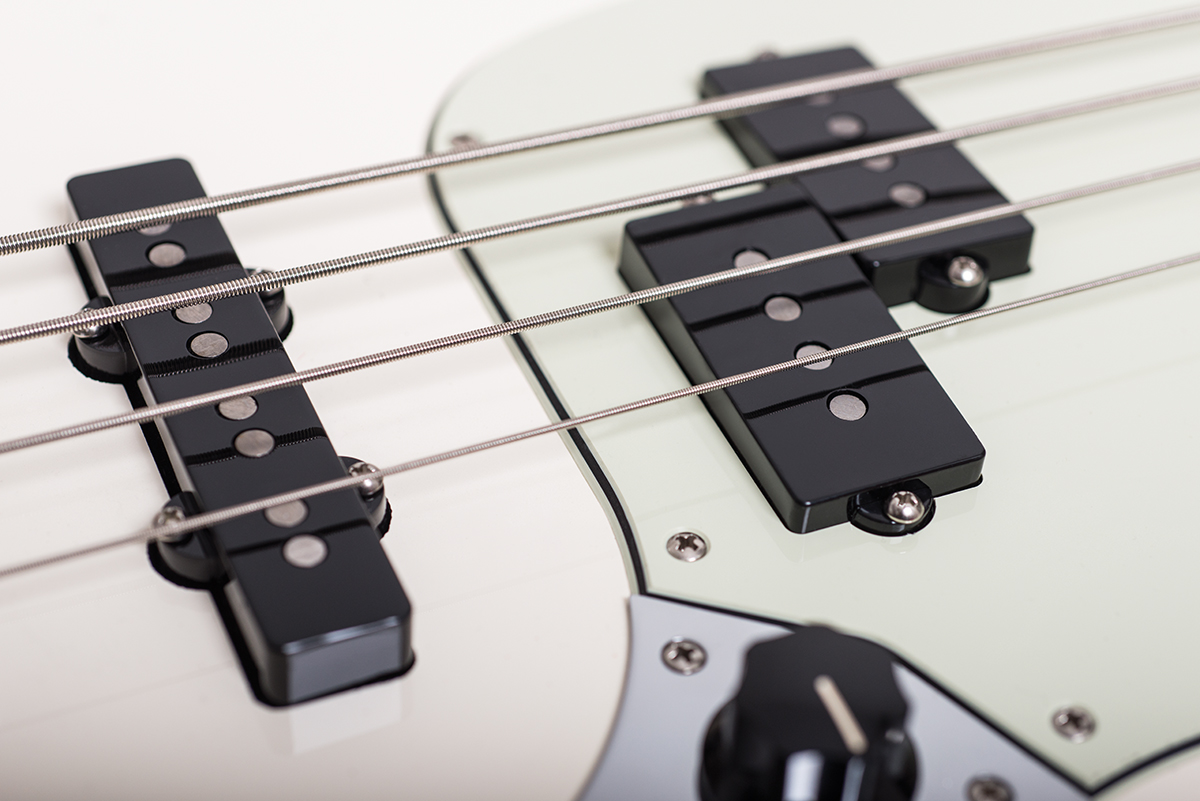 The split pickup handles those cover-all-genres Precision tones with admirable punch from a small package, while the middle and bridge settings take you into nasal Jazz Bass territory, albeit with a noticeably lower output.

If you want to impersonate a baritone guitar at the flick of a switch, select the bridge pickup and just add atmospheric reverb and tremolo. You might also consider obtaining a pair of red velvet curtains and learning to speak backwards for the full Twin Peaks experience. 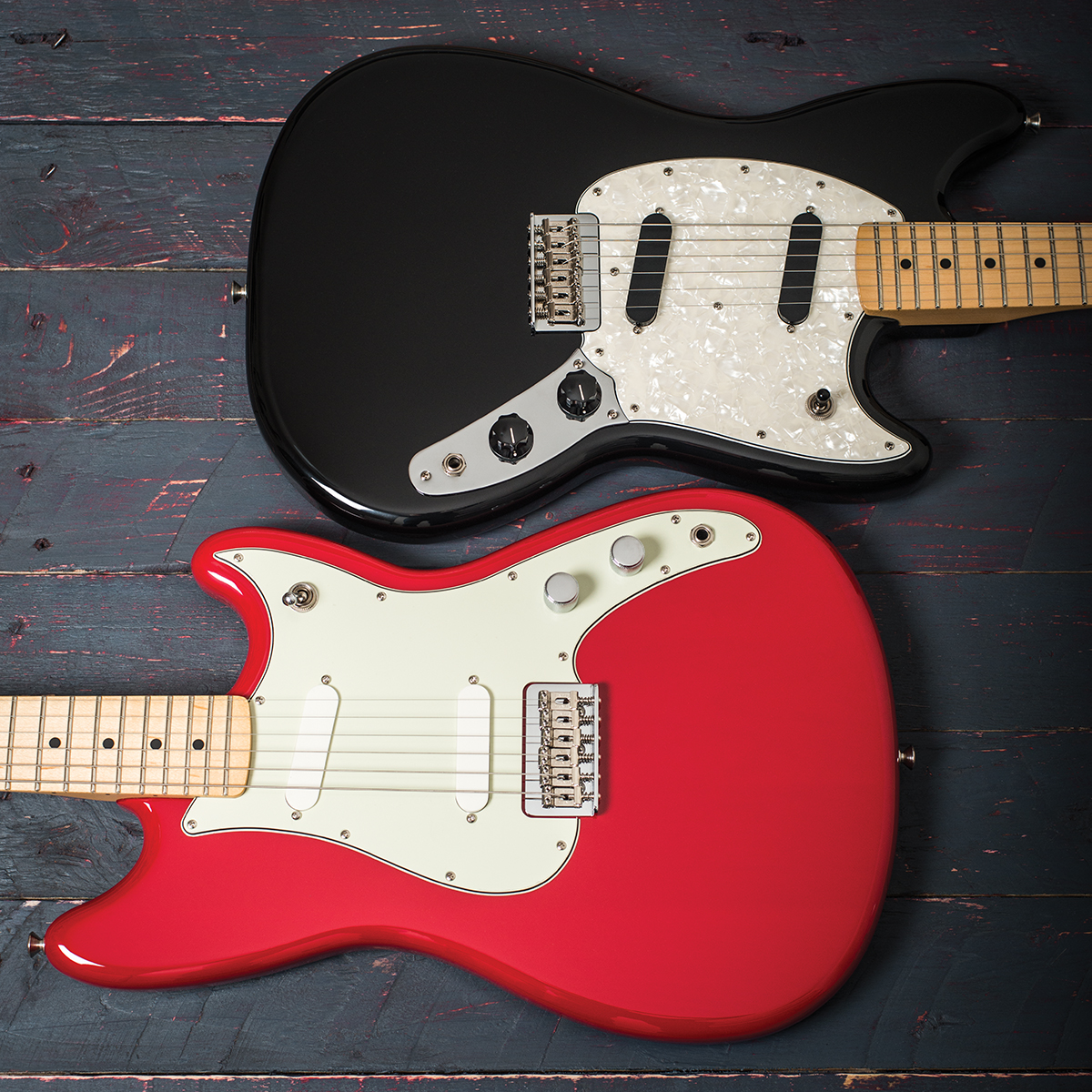 As either a guitarist-friendly, around-the-house bass for fun, or a compact and versatile studio instrument, the Mustang Bass PJ is almost a no-brainer purchase. Full-time bassists hankering after a more compact, lighter-sounding alternative to add to their collection should also give it a spin. If you are a player of diminutive proportions, it might even become your go-to four-string. 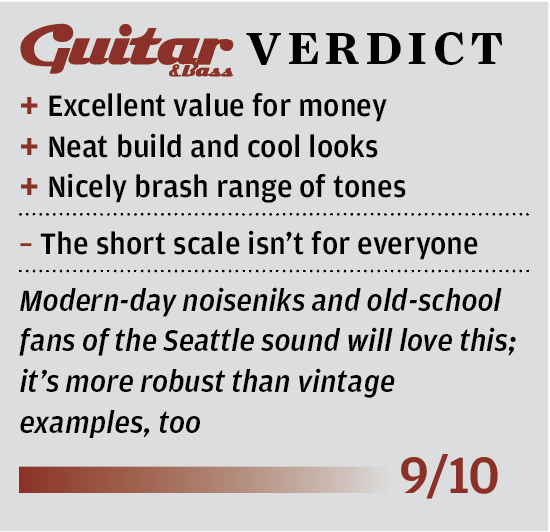 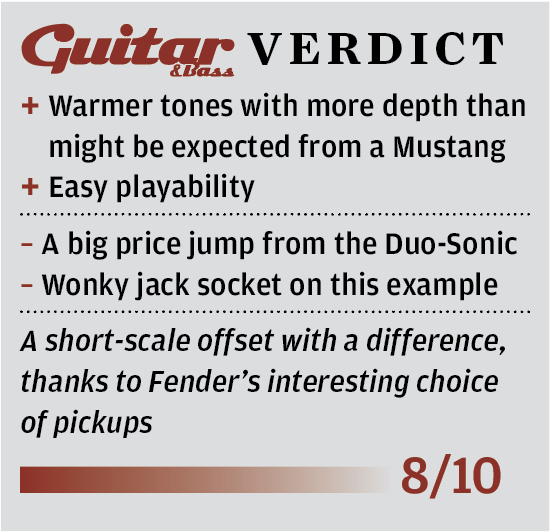 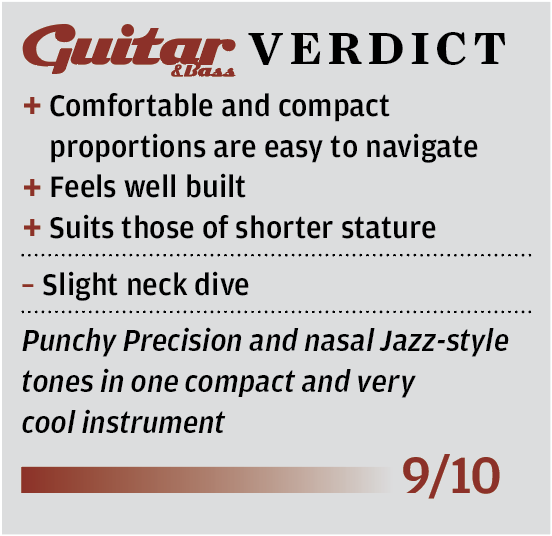