After decades of dabbling, Fender is making a proper go of the whole stompbox thing – but will these six new units floor the competition? 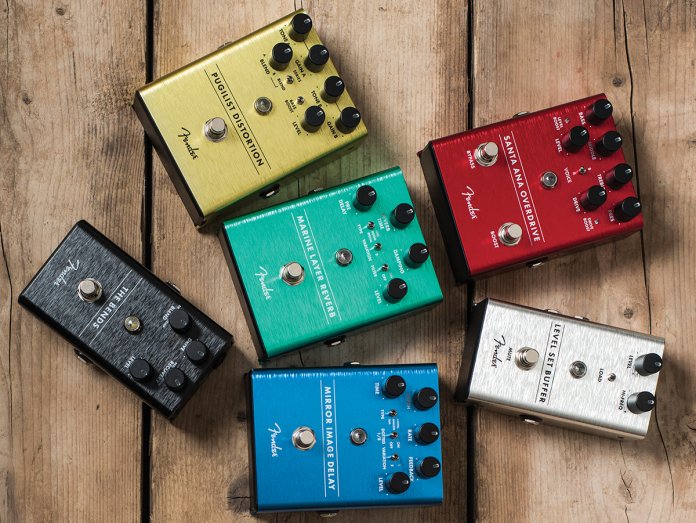 You may not realise it, but Fender has a long history in effects pedals. While there may have been more misses than hits since the amazing Fender Blender octave fuzz of the late 60s beloved of Billy Corgan of Smashing Pumpkins and Kevin Shields of My Bloody Valentine, it’s notable that the company has hailed this new range as “marking its official entrance into the category”.

What this really means is that Fender has finally decided to take stompboxes seriously. These are classy, understated pedals with some interesting features: sturdy aluminium construction, switchable LED position markers, offset inputs and outputs for snug pedalboard stacking, easy-access magnetic battery compartments… and, last but far from least, mass-market pricing. The effects chosen are equally sensible – dirt is handled by the Santa Ana Overdrive and the Pugilist Distortion, atmospherics are the preserve of the Mirror Image Delay and Marine Layer Reverb, while more utilitarian needs are taken care of by the Level Set Buffer and a compressor, The Bends. We’ve got all six here on test, so let’s plug them in and see what the Big F has come up with.

We’ve set the six pedals up in conventional signal path order, which means the least sexy one’s up first – the Level Set Buffer. Sorry. That being said, while giving your sound a bit of a push to overcome degradation through long cable runs is hardly a glamorous job, Fender has smuggled a couple of extra non-boring functions into this little silver box.

In fact, while most of us get by without a dedicated buffer, Fender’s focus here is more on making it easier to maintain a tonal balance between different guitars in a live setting. So the level and hi-freq controls allow you to fine-tune your pickups’ output before it hits your other, more exciting effects. There’s also a second output for a tuner, which still works when the main one is muted.

Compressor pedals are another thing that many players can live without, but there’s no denying that the smoothing effect of a good one is flattering to a guitar’s tone – especially if your playing dynamics are a little, ahem, unpredictable. 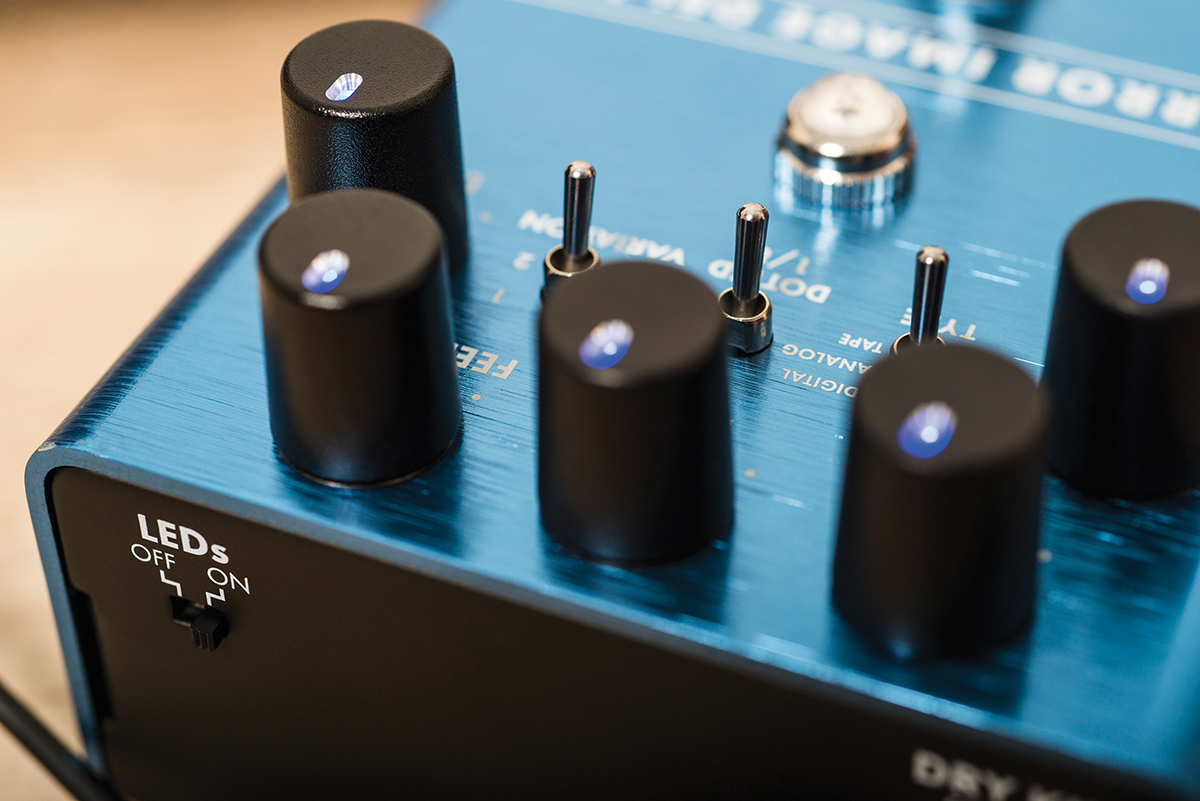 We’re pleased to see that The Bends follows the current trend of letting you mix some of your untreated signal into the compressed tone. ‘Drive’ controls just how hard your sound is squished, and there’s a ‘recovery’ knob for setting the release time.

Now we come to the colourful stuff – literally. The racer red Santa Ana is a FET-based overdrive with two switchable voices and a second footswitch that can be configured, via a little switch round the back, to boost either the gain or the output level. Tone-shaping comes from a three-way EQ section plus presence, and this is the only pedal of the six with selectable true or buffered bypass, thanks to another tiny slider switch.

If you think a pugilist is someone who breeds pugs, then the Pugilist distortion will soon send you scurrying to the nearest dictionary. This is a box of pure, hard-punching rock, the twist being that it has two separate channels that can be blended in parallel or stacked in series for maximum filth. Each channel has its own tone and gain controls, and there’s also a bass boost switch. The other striking point to note about this unit is that it’s barely half the price of the Santa Ana.

The two digital pedals in the series, the Mirror Image and Marine Layer, share an aquatic colour theme and, lurking by the mains input, both also sport a ‘dry kill’ switch for muting the original guitar signal. Each unit has three algorithms, available in two different flavours; in the case of the Mirror Image that means two straight digital delays, two warmed-up analogue types and two wobbly tape sounds. All six sounds can be modulated to taste – that’s what the depth and rate controls are for – and you can add a dotted 1/8th to the standard 1/4-note repeats for trippy textures.

Finishing up the collection is the Marine Layer, which features six reverb algorithms: two halls, two rooms and two ‘specials’ – both heavily modulated, and one of them with a shimmer option. You can dial in some pre-delay to keep the reverb from swamping your dry signal, and the combination of a filter switch and a damping knob offers plenty of control over the tonality of your moody ambiences. 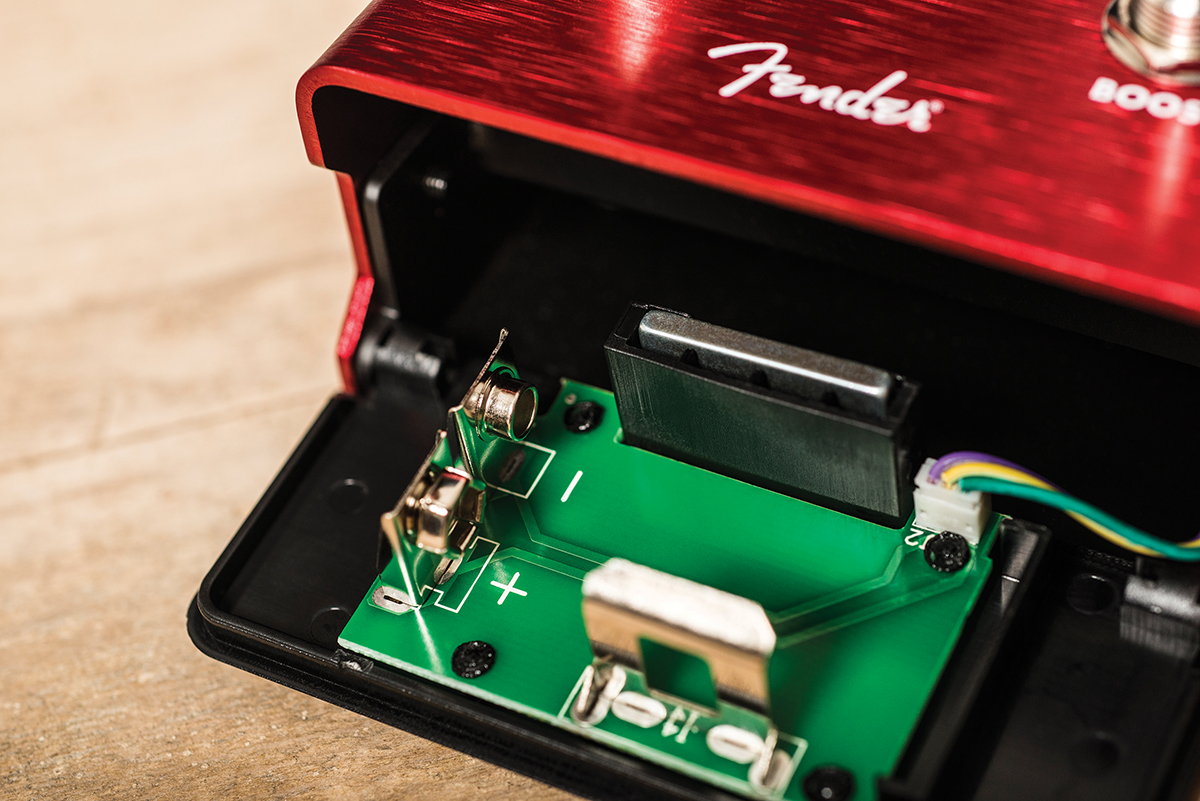 Right, let’s start with some general impressions of the range before we pass judgement on the individual units. We like the flip-open battery compartments; we like the cute LED markers even more; but we’re not so keen on the amp-style jewel lights, which are searingly bright and so close to the controls they can be seriously distracting.

These are weighty units and we’re mostly impressed with the build quality, although the footswitches could be a weak spot: our Santa Ana Overdrive has the dreaded momentary dropout when you switch it on or off. That might not seem like a lot, but it can be a real issue when gigging, and we’re hoping it’s not a common problem.

So, on to the Level Set Buffer. Basically, it works. This is a simple and effective buffer for keeping your signal strong and clear through an assault course of true-bypass effects, and its mute function and tweakable top-end will take much of the hassle out of on-stage guitar swaps. It’s a functional device, and we’re not in love with it, but it could be a godsend for some. By the way, that little toggle switch changes the capacitive load seen by the pickups – but we couldn’t really notice any discernible difference with most of our test guitars.

The Bends is an altogether more satisfying pedal to play around with… but again, the bottom line is that it does the job. With drive around halfway you can add a little fullness and sparkle to your clean tone without making it sound obviously compressed, and even at more aggressive settings there’s no thumping on the flattened transients. Beyond three o’clock you might hear some jerky oddness as decaying notes bounce around the threshold, but this is easily softened by dialling in some of your uncompressed tone.

You could argue that Fender has already been making the finest dirt machines in the world since the 1950s – in the shape of its gloriously crunch-happy tweed amps. There are no 6V6s in the Santa Ana, though. Its core tone is full enough but with a distinct Marshall-like rasp, and perhaps better-suited to lead lines than chords. The two voices are strikingly different in terms of treble content, and the EQ controls and boost footswitch mean you can cover plenty of tonal ground with this box. Don’t expect boutique smoothness, though. 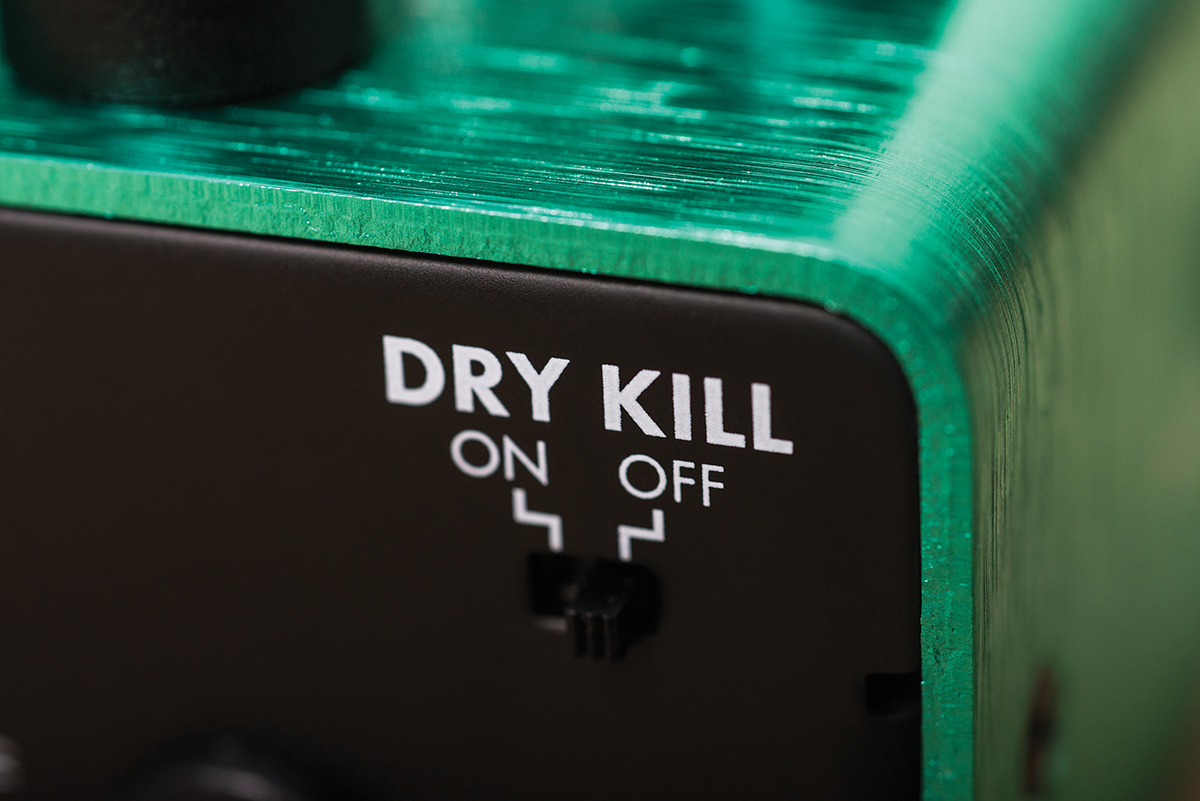 The Pugilist is a simpler proposition: it’s all about raw power. The two channels are broadly similar in character, but the ability to set them up with different gain and EQ levels then blend between the two means you can dial in just the right flavour of heavily saturated noise. A second footswitch for channel-hopping would have been nice, though, and the ‘series’ setting seems to offer less headroom, but without any more real ferocity.

In stark contrast, the Mirror Image Delay is all about space and sonic purity. The analogue and tape emulations sound superb, and the ability to control both rate and depth of the modulation means you can really tailor those atmospheric imperfections – and that’s before you’ve even flicked on the dotted 1/8th for more complex, fluttery patterns. The only thing this pedal really lacks is the ability to go a bit mad: with delay level and feedback both maxed out, it’s still doggedly tasteful.

That’s a strong act for the Marine Layer Reverb to follow, but it’s up to the job. Again we’re talking about a hi-fi effect that scores highly for clarity, and again you’re free to mess that up just as much as you like with the filter switch and damping control. The shimmer effect is more of a subtle texture than a full-on octave shriek, and that’s probably for the best.
An impressive array of pedals, then – but the delay and reverb are our clear favourites. If we were forced to choose between the two? We’d probably grab both and eat Pot Noodles for a month. 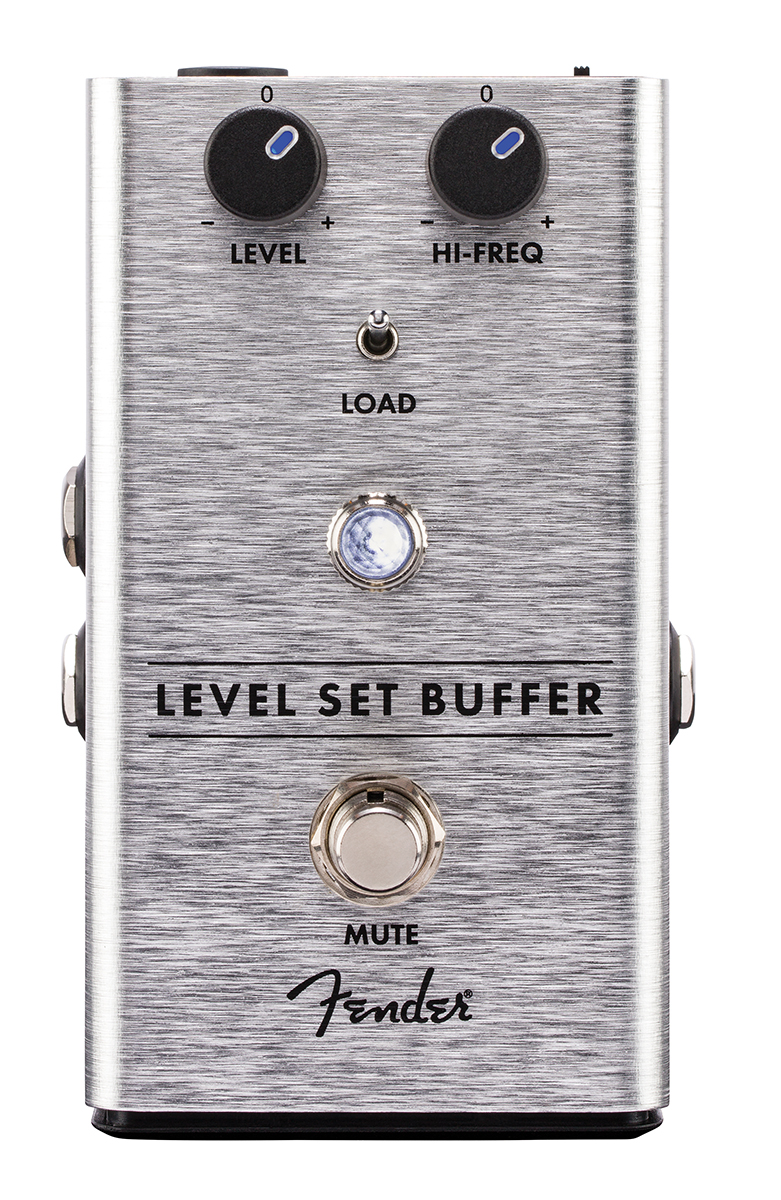 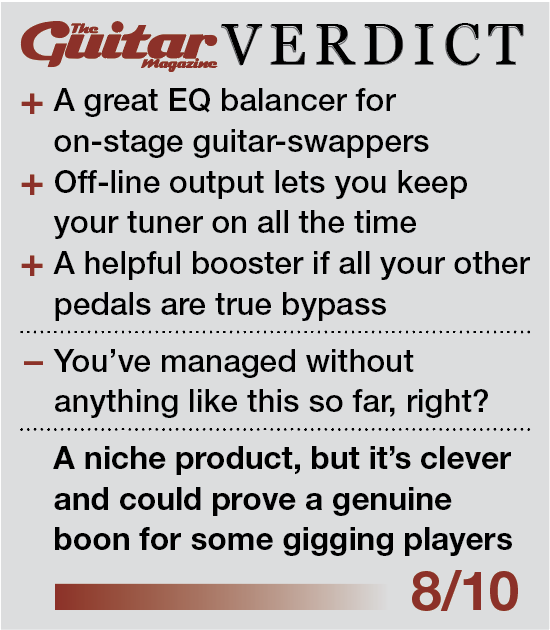 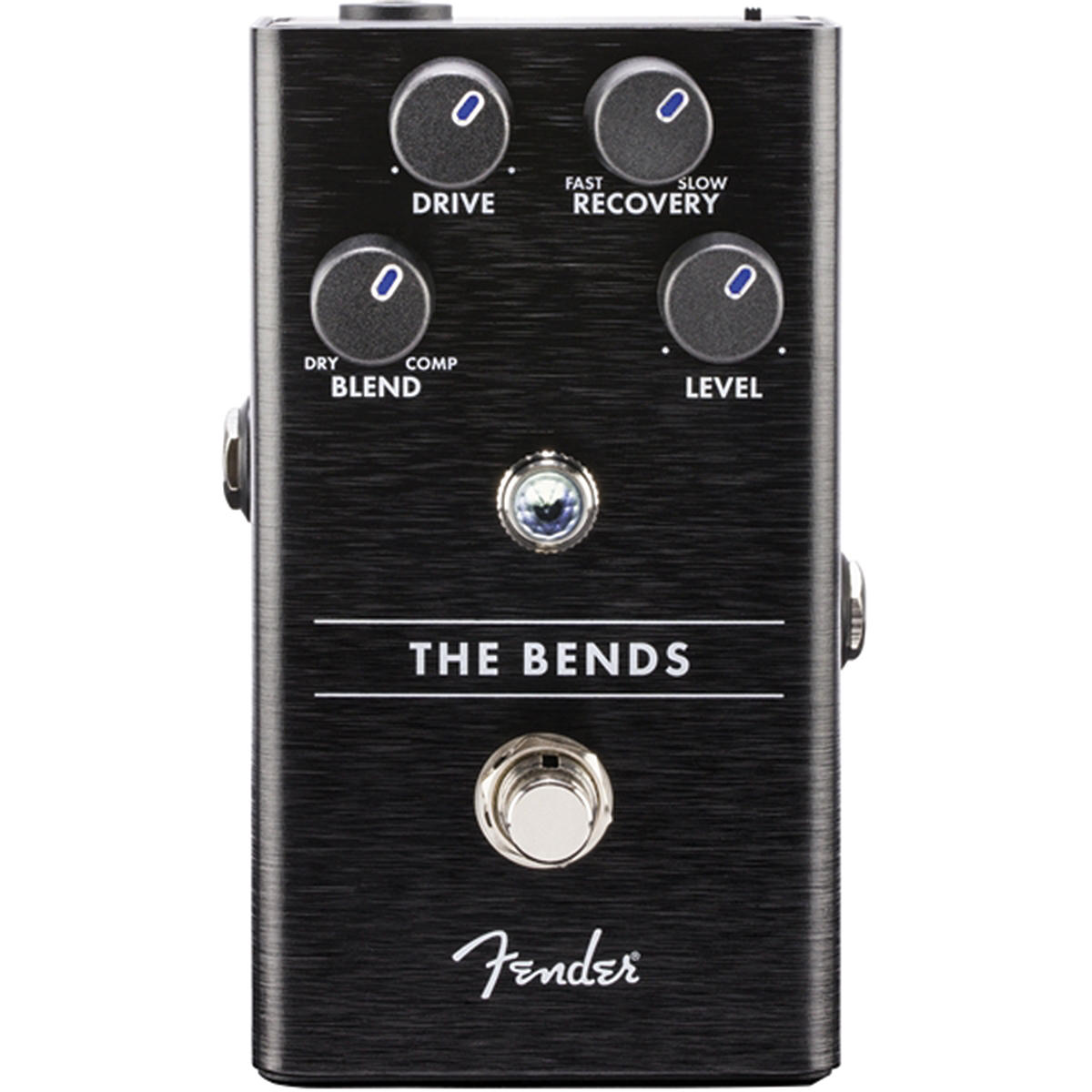 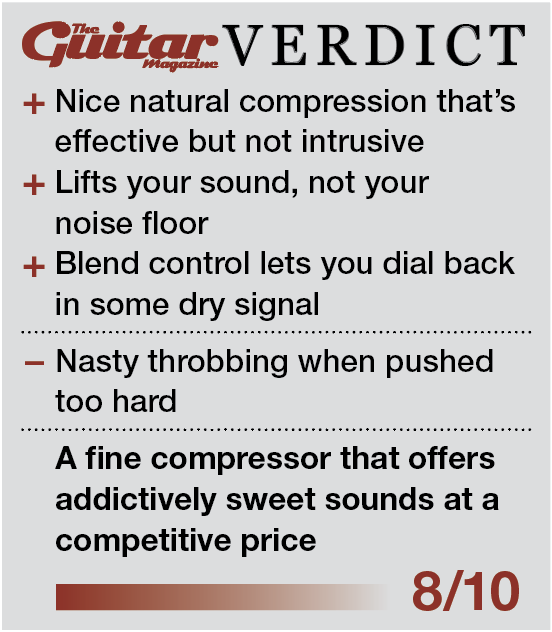 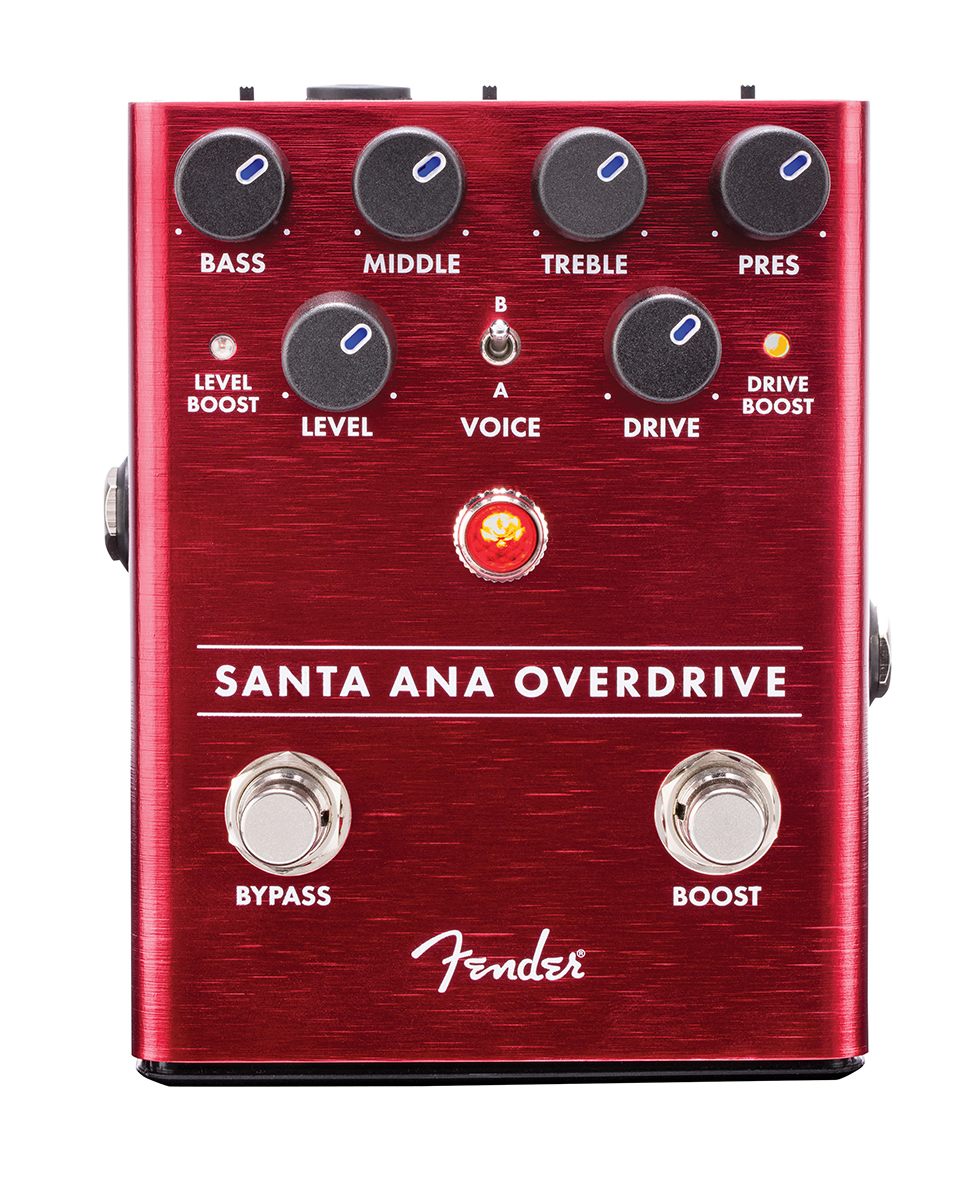 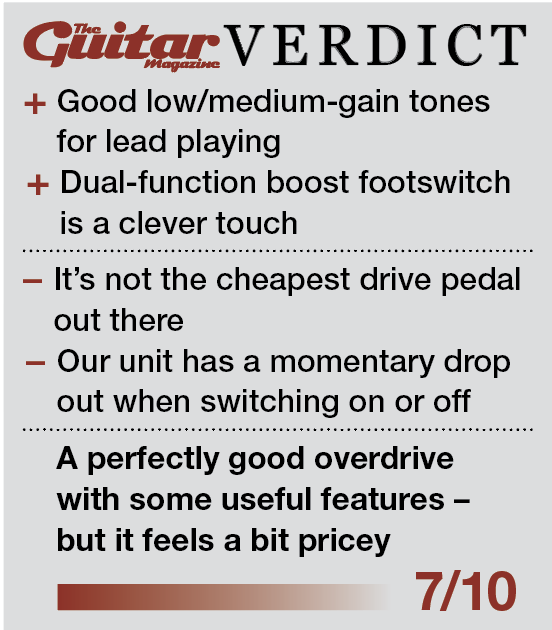 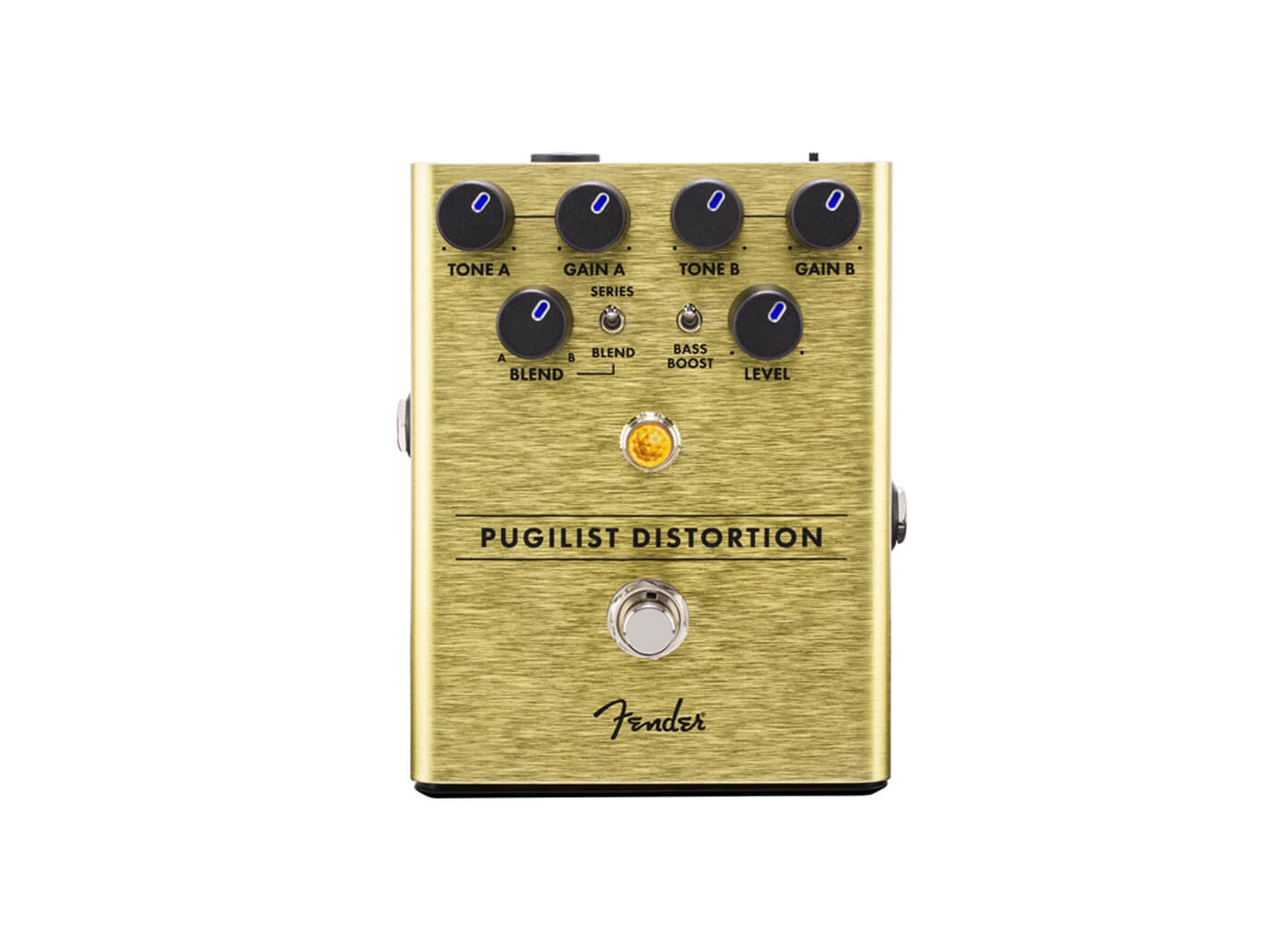 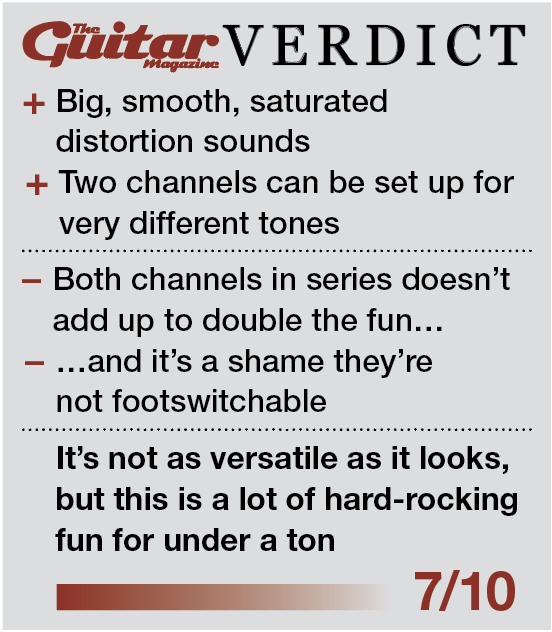 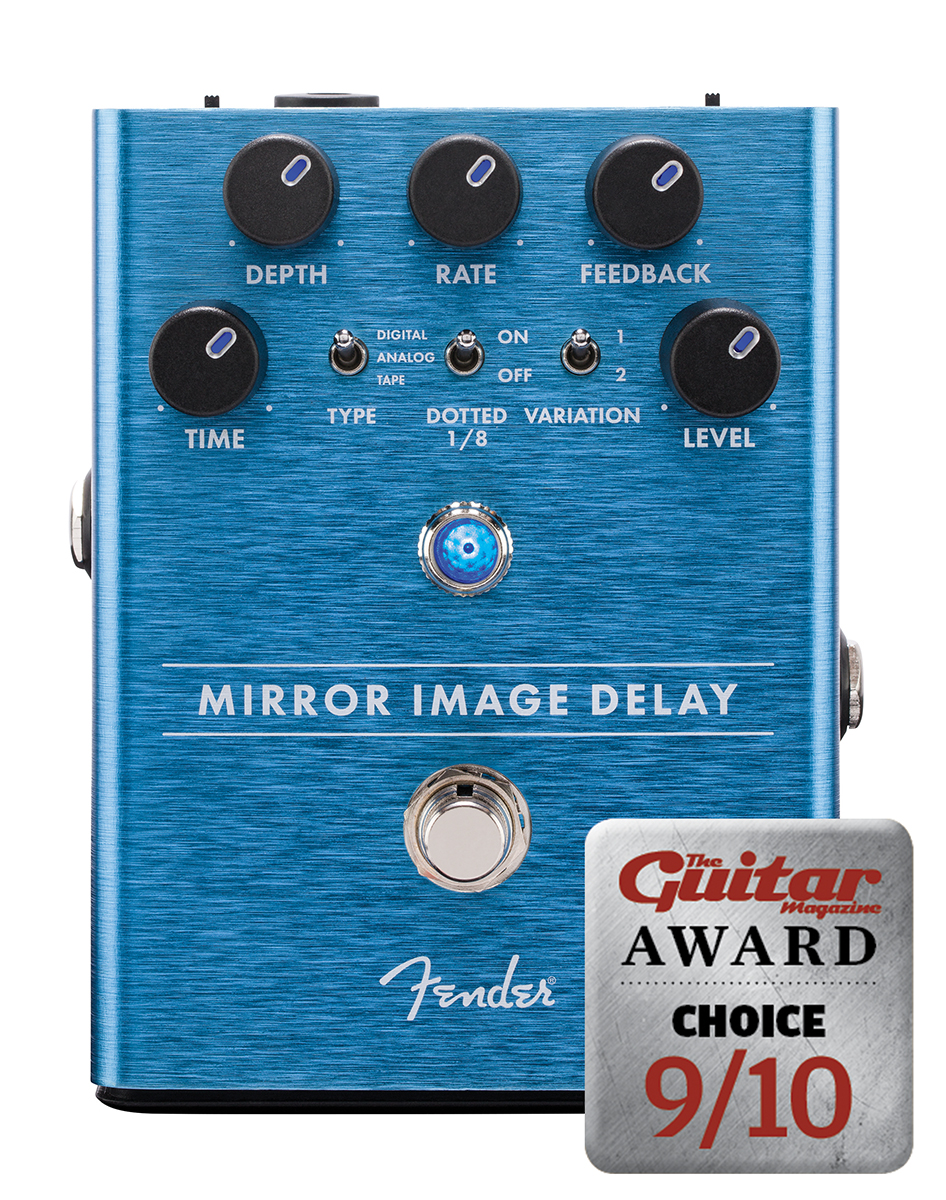 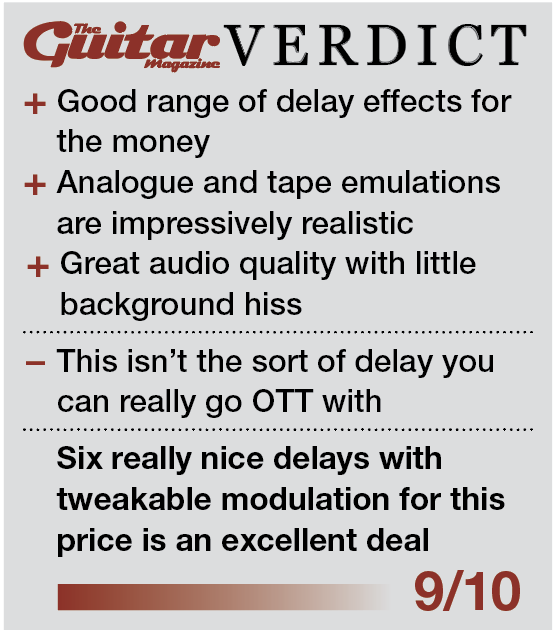 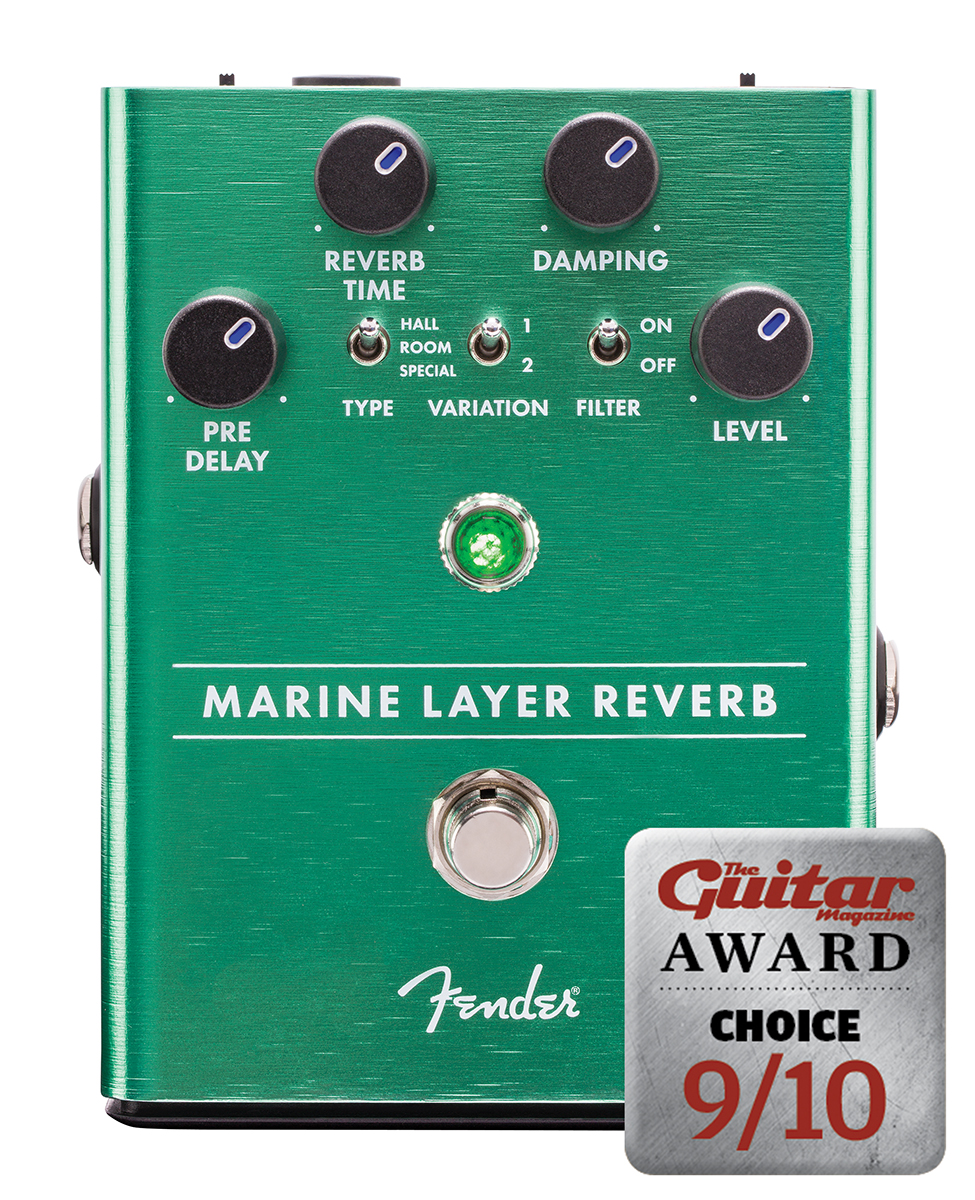 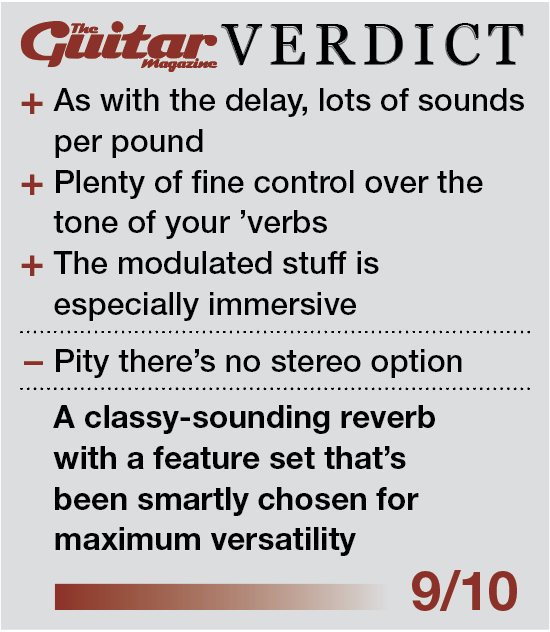