Leo Fender’s attempt to corner the jazz market with the Jazzmaster found the company some unexpected fans. Huw Price examines a glorious 1959 example… 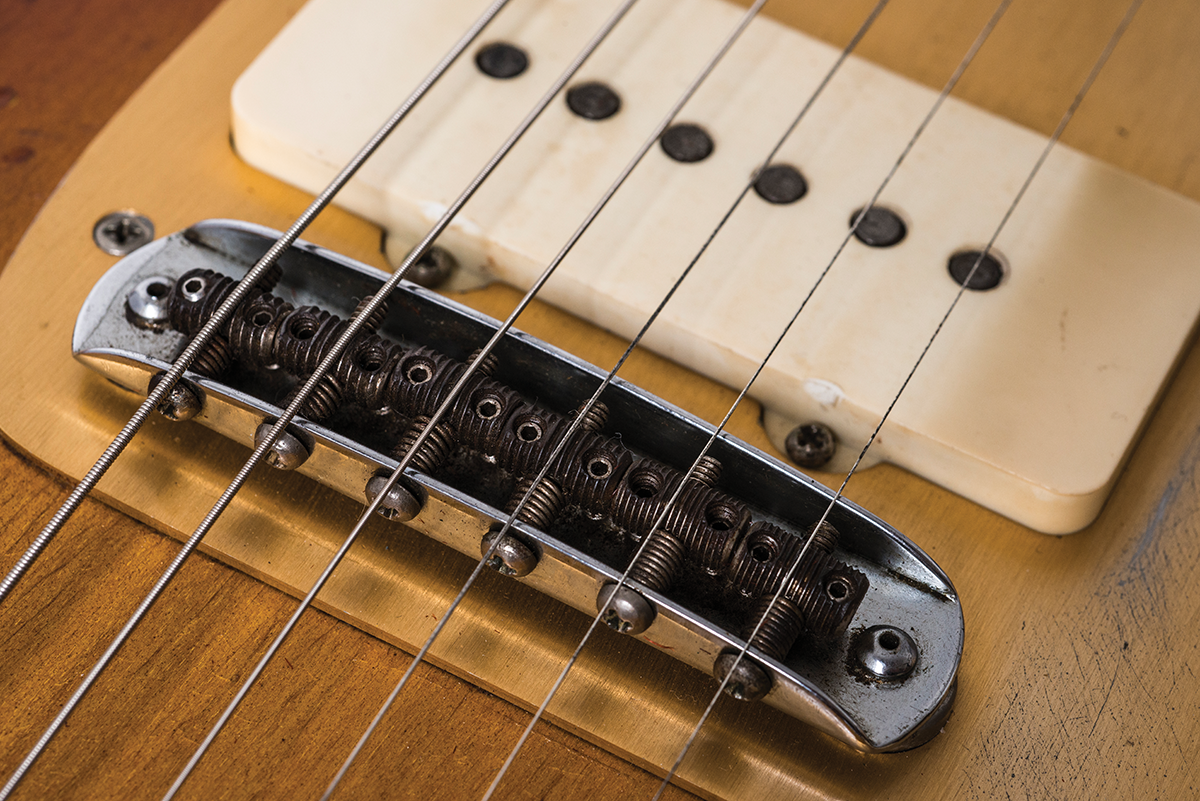 Although strange now, Leo Fender was shooting for the jazz market when he developed the Jazzmaster. As was sometimes the case, Leo’s ideas failed to cause much of a stir among his target market, but ended up creating something perfect for genres he wouldn’t have considered – or were yet to be invented. The Jazzmaster was destined to become synonymous with surf, avant-garde rock and indie noiseniks.

Leo Fender must have had a soft spot for gold anodised aluminium, he used it for the pickguard on some of the very first Strat prototypes. Fender tried the gold anodised aluminium thing again with the Precision and Mustang and the earliest production Jazzmasters. By 1960, Fender had swapped to tortoiseshell and green celluloid guards – depending on the body colour.

The problem with gold anodised aluminium is that it’s much like gold guitar hardware; it looks nice and glitzy when new, but the lustre soon starts to wear off. If you share Donald Trump’s aesthetic sensibilities this may bother you, but many of us prefer gold parts when they’re, um… a little bit less gold.

This Jazzmaster’s pickguard is a case in point. 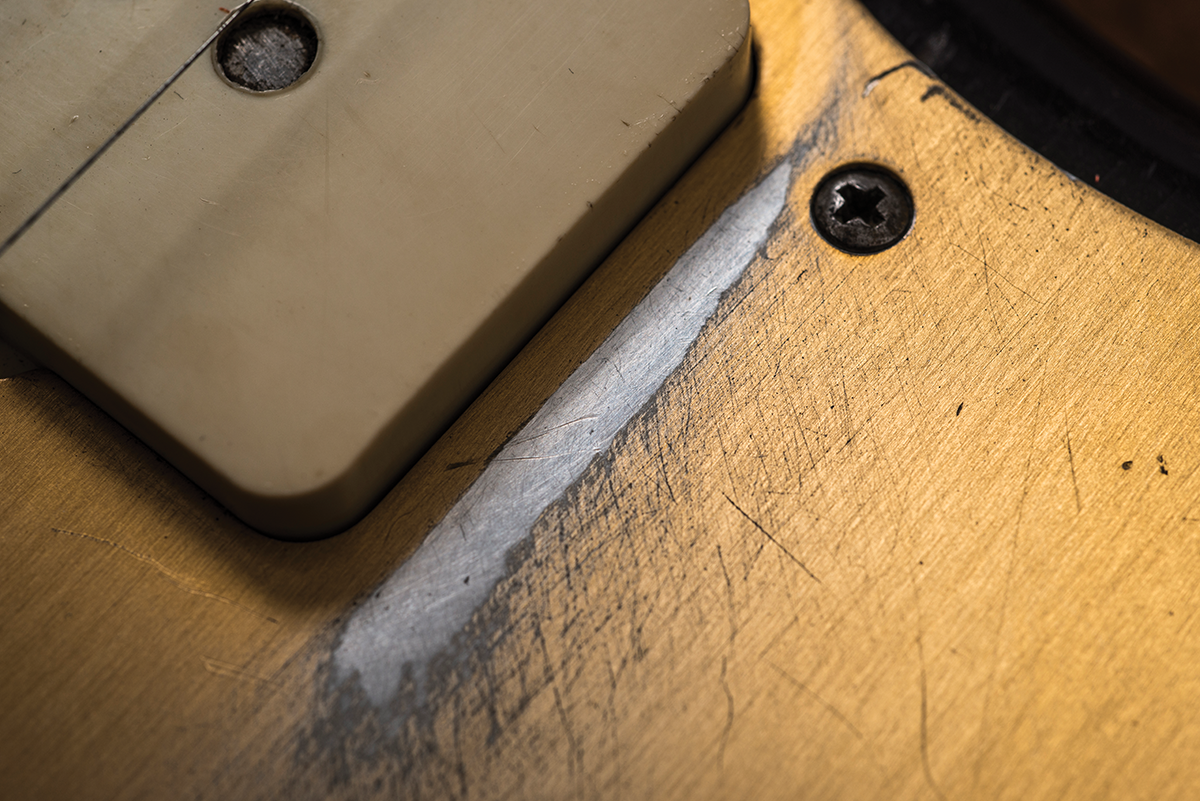 Beneath both pickups, plectrum wear has exposed natural aluminium. Understandably, players were less into the relic thing 50 years ago, so this tendency to rub through probably caused headaches for Fender’s warranty department. One advantage aluminium has over celluloid is that it doesn’t shrink, so you can still adjust the pickup heights because the covers won’t be wedged tight.

It’s remarkable how much late-50s sunburst finishes differ from later versions. Since the back of this guitar has such extensive buckle rash it’s easy to see how Fender did it. The body was stained yellow before spraying, then the red and brown bands were added before clear coats were sprayed over the top. Since there’s no Fullerplast sealer, the wafer-thin lacquer has sunk into the grain and there’s extensive lacquer checking cutting across the body. In summary, this is an exquisitely aged late-50s three-tone ’burst.

Although the neck shows extensive playwear, the bare wood is confined mostly to the areas closest to the edges of the slab rosewood fingerboard. Interestingly, the neck finish has darkened less than the headstock decal, so there’s a nice contrast. 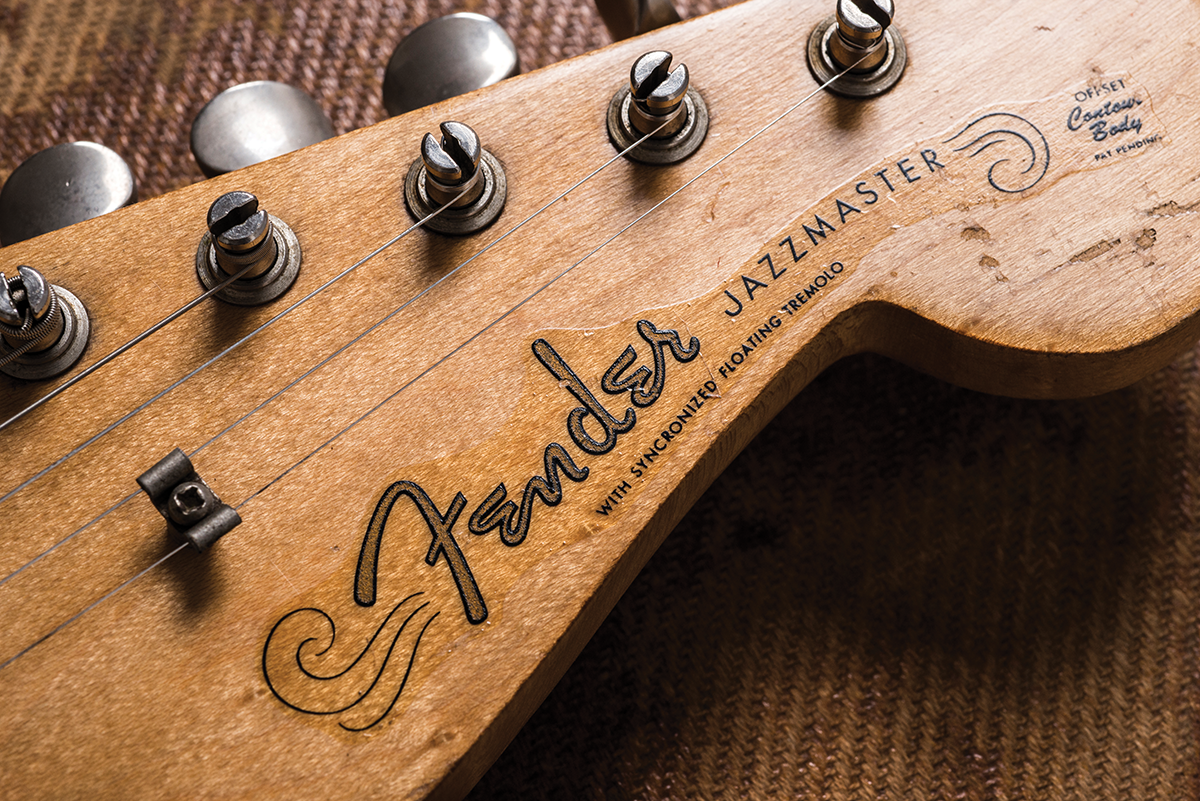 I also found a January 1959 pencil date at the end of the neck, which is consistent with the late-58/early-59 serial number. The single-line Kluson tuners check out too, with metal bushings and the patent number stamp that puts them within a 1958-64 timeframe.
This neck has been well played and some divots have been filled expertly around the first three frets. The colour match is outstanding and the repairs are fairly hard to spot. I can find nothing to suggest the frets aren’t original and there would be no real urgency to consider a refret.

’59 Fender Jazzmaster In use

Jazzmasters feel somewhat different to Strats and Teles. It’s not so much the body as the position of the neck, possibly a perception thing caused by the backwards-shifted treble-side waist. Things might have been easier if I could see the side dots, but like the clay fingerboard dots, they have darkened with age and they are somewhat camouflaged. Needless to say, it didn’t take too long to adjust and start enjoying this great-playing guitar.

The neck feels sublime. It’s sleek and fast, but not insubstantial. Down the cowboy end, it’s on the thin side of medium with an open C profile. From the third fret upwards it thickens up, with the open C beginning to round out around the ninth fret.

At the 12th, there’s a nice clubby feel and the action feels low and slinky. Having said that, this Jazzmaster is crying out for a setup and a fresh set of strings. 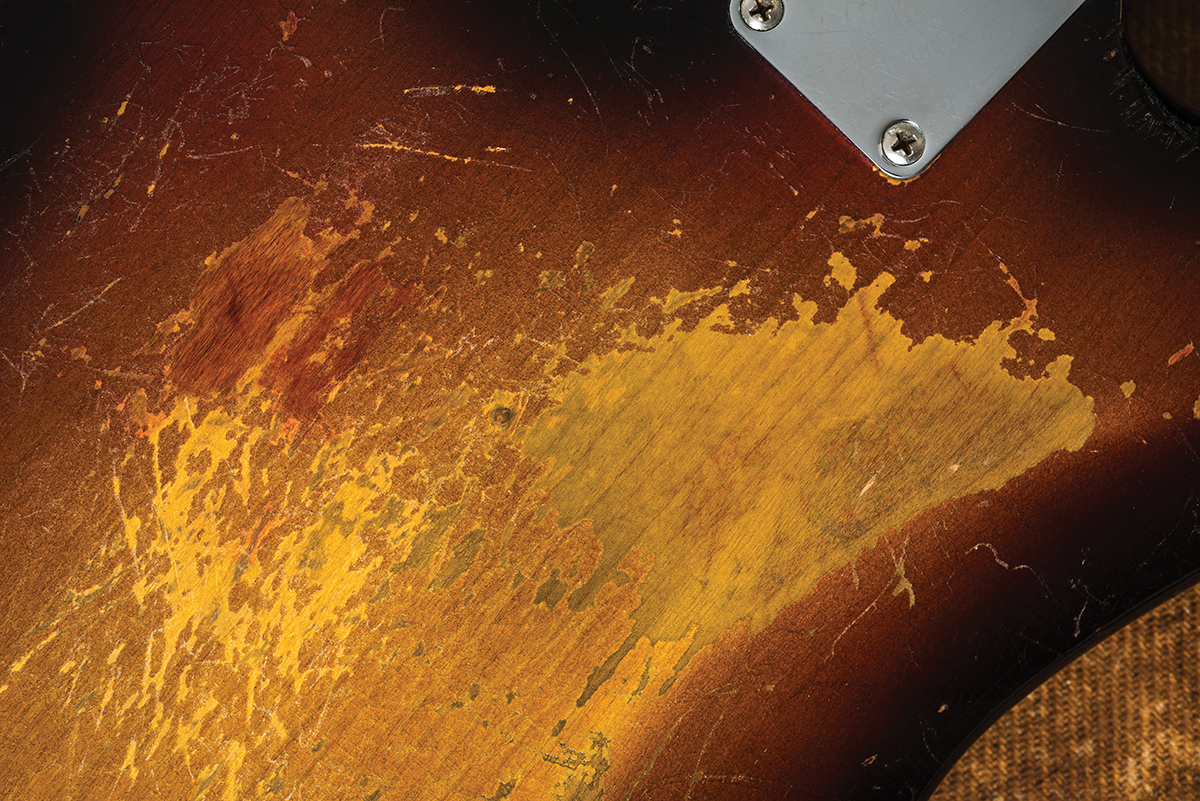 Fender was going for a smoother and fatter tone with the Jazzmaster, and its pickups have the shortest and widest coils of all the classic Fender pickups. In size, shape and sound, they’re closer to the P-90s most jazz guitarists were using while the Jazzmaster was in development.

Electronically, it’s like two guitars in one, with a separate ‘rhythm’ circuit and a regular control layout with master volume and tone. The rhythm circuit involves the neck pickup only and has rotary controls for volume and tone that are tucked out of the way. Compared to the regular neck pickup tone, the rhythm circuit sounds a bit muted, but this is normal.
Played clean it has a vast tonal range with pickups that can sparkle and roar. There is a more natural woodiness than you get with many Fenders, and the trem produces a hazier drift than the Strat’s. I love the way this guitar smoothes and sweetens the harshest fuzz tones and melds seamlessly into modulation for truly mesmeric effects. 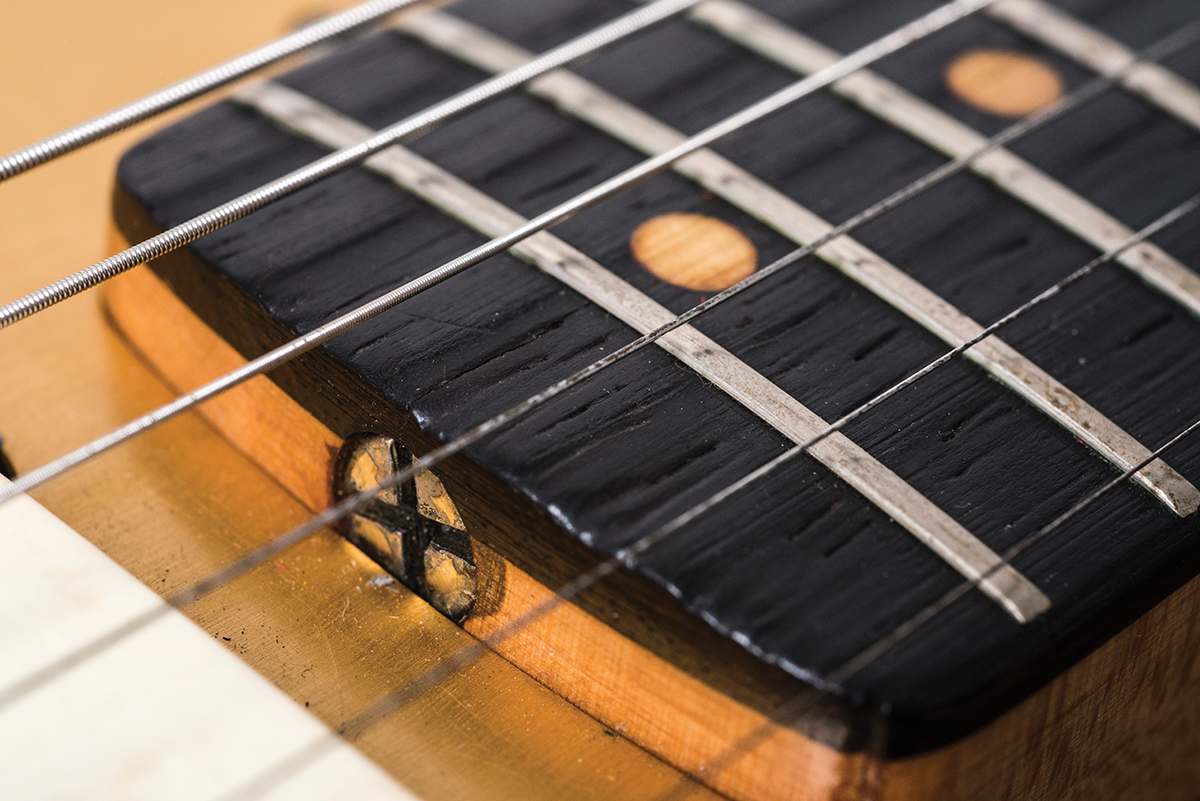 I couldn’t quite decide if the middle setting was hum cancelling or out of phase, but I love the phasey quality. Both pickups are some distance from the strings, it seems likely that all the sponginess has gone from the foam spacers under the pickups.

As fantastic as this guitar sounds, it’s almost certain that I didn’t even hear the best of it. However, there’s nothing here to suggest this is anything other than a well played but cherished late-50s FenderThe frets may be low-ish, but they’re perfectly serviceable. With a new set of strings, a squirt of circuit cleaner and a dab of lube, you could be gigging this guitar tonight. If I were in the market, this Jazzmaster would tick every box.