Bluetooth. Wifi. App control. Fender amps have come a long way since the Woody models of seven decades ago. Chris Vinnicombe revs up a pair of new Mustang GT models… 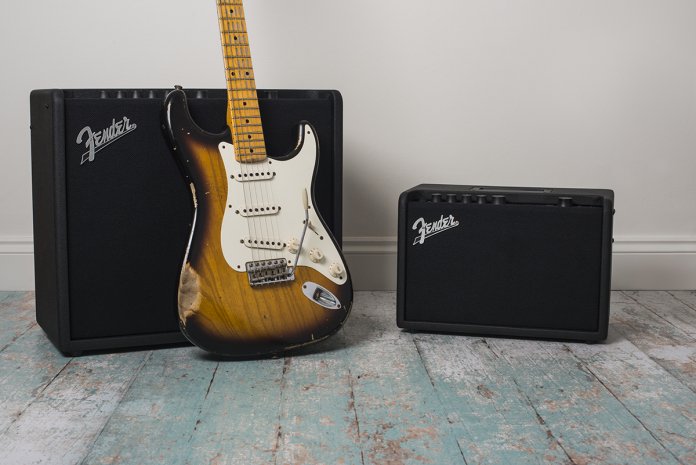 As the company responsible for the greatest and most influential amplifiers in history, it makes perfect sense that Fender should address what guitarists need to make themselves heard in 2017. Much as this writer’s favourite guitar tones come from circuits designed in 1947, even the dustiest and most curmudgeonly tube hounds wouldn’t have the Astrons to deny that there are times when hot glass in a pine box is just too loud and impractical to dovetail neatly with the volume limitations of modern life.

Although there’s plenty of competition around these days, Fender has been in the digital practice/lifestyle amp business longer than most. Back in 2006, when YouTube and Facebook were in their infancy and smartphones weren’t that smart, the Fender G-Dec (‘Guitar Digital Entertainment Center’) combined modelled amp tones with effects, backing tracks, drum loops and a whole lot more besides.

September 2010 saw the Big F redeploy the Mustang moniker best known for its use on short-scale 60s student instruments and assign it to a range of digital amplifiers heavy on features and innovation and light on the wallet.

However, as anyone with shares in MySpace will tell you, the problem with cutting edge technology is that it ages rapidly. Earlier this year, when we found out that Fender was planning a major overhaul of its Mustang amp range, it seemed like high time. Products such as Line 6’s AMPLIFi had proven that wireless control of amplifier functionality was more than just a gimmick and the stage was set for Fender to weigh in.

Whether it’s connecting to your telephone, interacting with an online community of music-makers, downloading presets designed by Fender artists or your getting in touch with your own creativity, the idea behind these new Mustang GT amplifiers is that they are about making a connection. The range comprises three models, two of which we’re looking at here.

The GT 40 is the most compact and living room or bedroom-friendly of the trio, and it pumps 40-watts out of a pair of 6.5-inch drivers. The GT 100 takes a whole lotta tech from the home to the stage with 100 watts harnessed to a 12-inch Celestion Special Design speaker while the GT 200 doubles the power and speaker complement for a massive 200-watts of ’Stang. 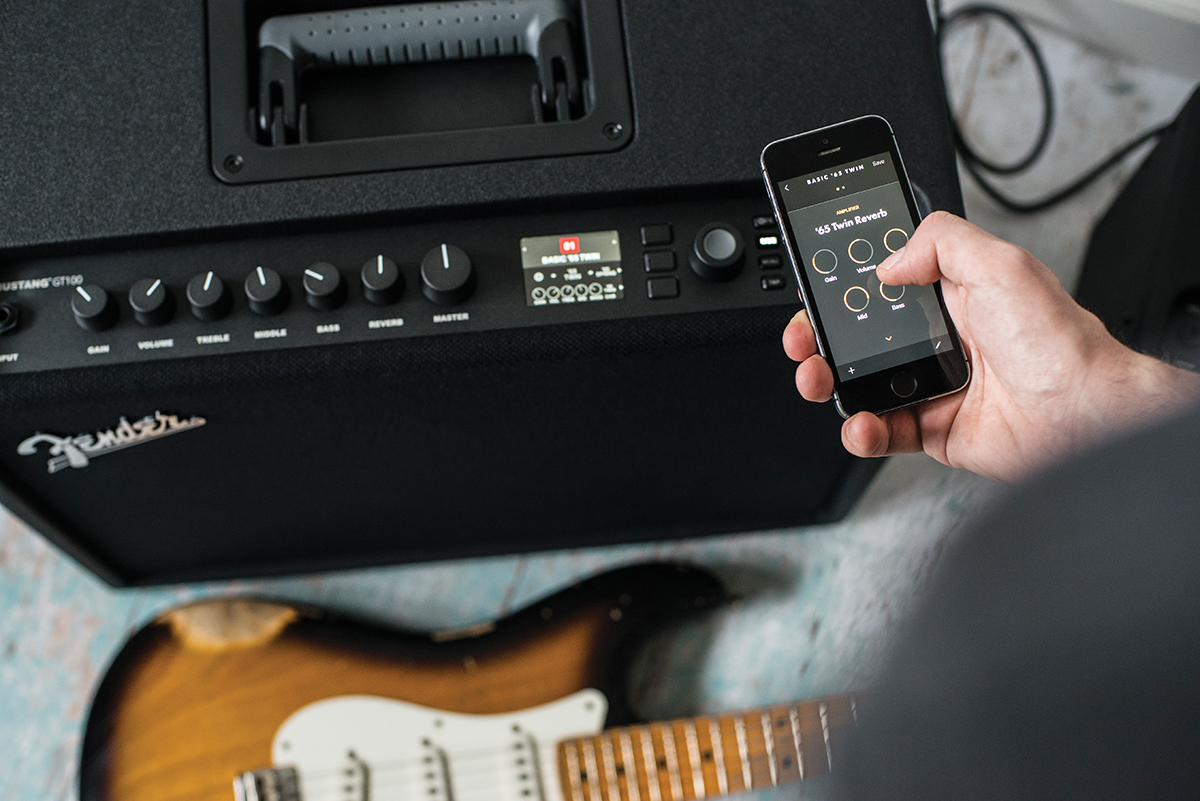 The sleek enclosures bear a familial resemblance to Fender’s smart-looking Acoustic amp range launched at Winter NAMM in January 2017, and as well as neatly integrated handles and recessed control panels, you get 21 newly-upgraded amp models, 46 effects and a clean and easily legible colour LCD display.

The connectivity options are impressive; claimed to be the world’s first wifi-equipped digital guitar amps, the GTs allow you to download firmware updates and share presets wirelessly but the big news is that speedy and stable Bluetooth LE support enables you to programme the amp and edit sounds remotely and on the fly using the free Fender Tone app on your Android or iOS smartphone.

As well as sculpting your core sound or auditioning presets, the clean and easy-to-use Fender Tone app allows for deep editing of under-the-hood features that are a tweaker’s delight such as bias and sag.

As you might expect, classic Fender amplifiers are well-represented among the onboard models and a wide range of iconic amplifiers from the company’s glittering history are modelled including a brown Deluxe, blackface Twin Reverb, tweed Champ, Bassman and plenty more besides.

The likes of Johnny Marr and Gary Clark Jr have contributed artist presets, while a host of amp models inspired by amplifiers from outside of the Fender stable keep your virtual collection well rounded, from the distinctly Marshall-y ‘70s British’ model to more esoteric selections. Effects can be placed pre or post in the virtual chain and they range from retro recreations to more modern ambient effects such as shimmer.

As if all that wasn’t enough to get to grips with, you can also stream your favourite music for the purposes of listening or jamming along while the optional MGT-4 four-button footswitch enables 60-seconds of looping functionality. There’s also support for ‘setlists’ and effects trails spill over when you switch between presets for less jarring transitions. 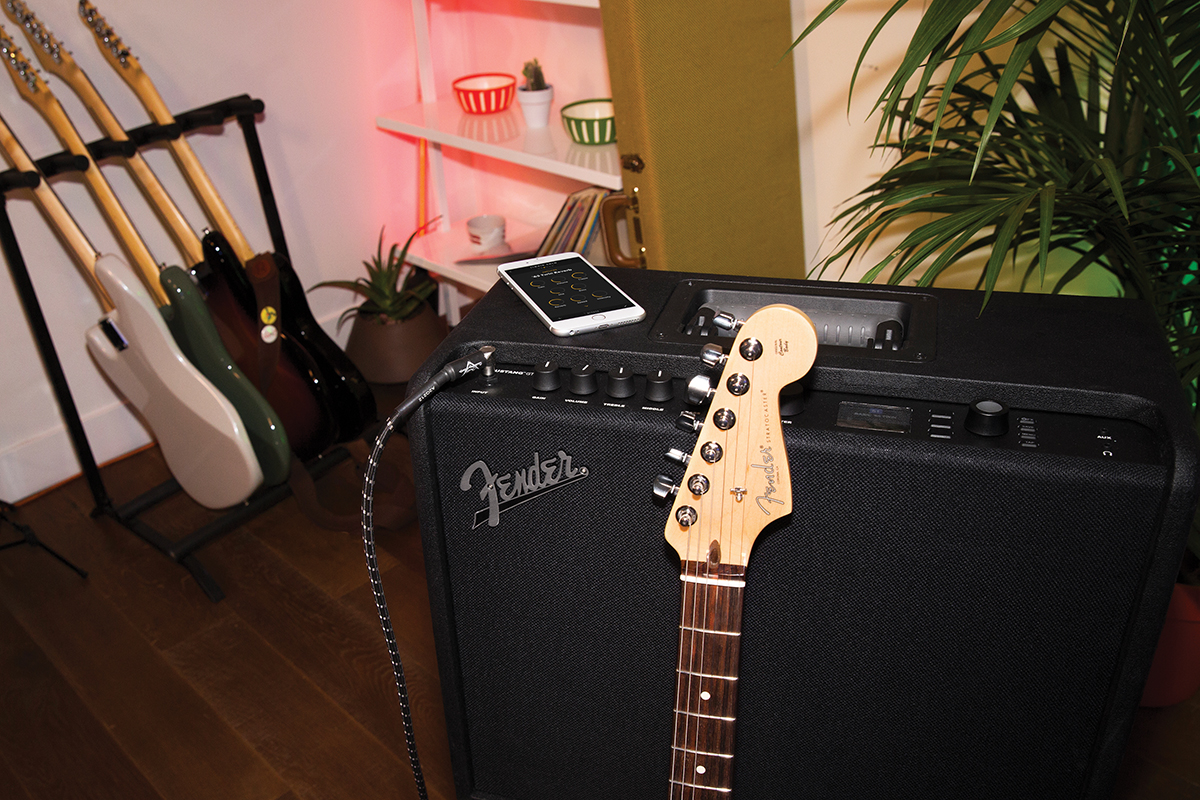 The GT 100 will take you from the bedroom to the stage, but the GT 40 is likely to be more living room friendly

In Use
It’s remarkable how quickly you get to grips with using the Fender Tone app. In a home practice scenario it’s hugely satisfying to make sweeping adjustments from the comfort of the sofa. It’s not that the labour-saving aspect appeals to our indolence, there’s just less faff to get in the way of making music when you don’t have to get up and fiddle with onboard controls every few minutes.

Most of us are time-poor these days, and it’s quicker and more intuitive to flick through presets using an iPhone from the other side of the room. That’s not to say that the experience that the Mustang GT amps offer is superficial: if you want to adjust the bias of the ’57 Champ model that you are running into a virtual 4×12 then you can do that too. It’s as shallow or deep as you need it to be.

If we were to A/B test the various models available here against their real-life equivalents then the perceived ‘realism’ of the Mustang’s tones would no doubt be variable, but that’s hardly the point – there are more than enough high-quality amp voices and effects here to keep us interested for a long time to come.

For our money, the blackface models provide the most organic tones and response. Emulating the more harmonically complex tweeds seems to have presented a tougher challenge for the tech.

It’s interesting to note that to a man, the members of the G&B team gravitated to the GT 40. If you’re a player who already owns one or more high-quality valve amplifiers then it’s the obvious choice; as a device into which to stream audio, jam along or just noodle away unaccompanied, it’s easy to imagine the GT 40 on a shelf in your living room or home office. It’ll make you play more guitar.

The 100 is undoubtedly a much punchier affair, but it feels more like a feature-packed first gigging amp than a game-changing lifestyle product. That’s not to say there’s no market for the 100 or even the GT 200’s massive 2x 100-watt stereo spread, quite the opposite.

From tech-savvy fledglings to experienced players who crave a versatile and portable backline, we foresee thousands of happy customers. 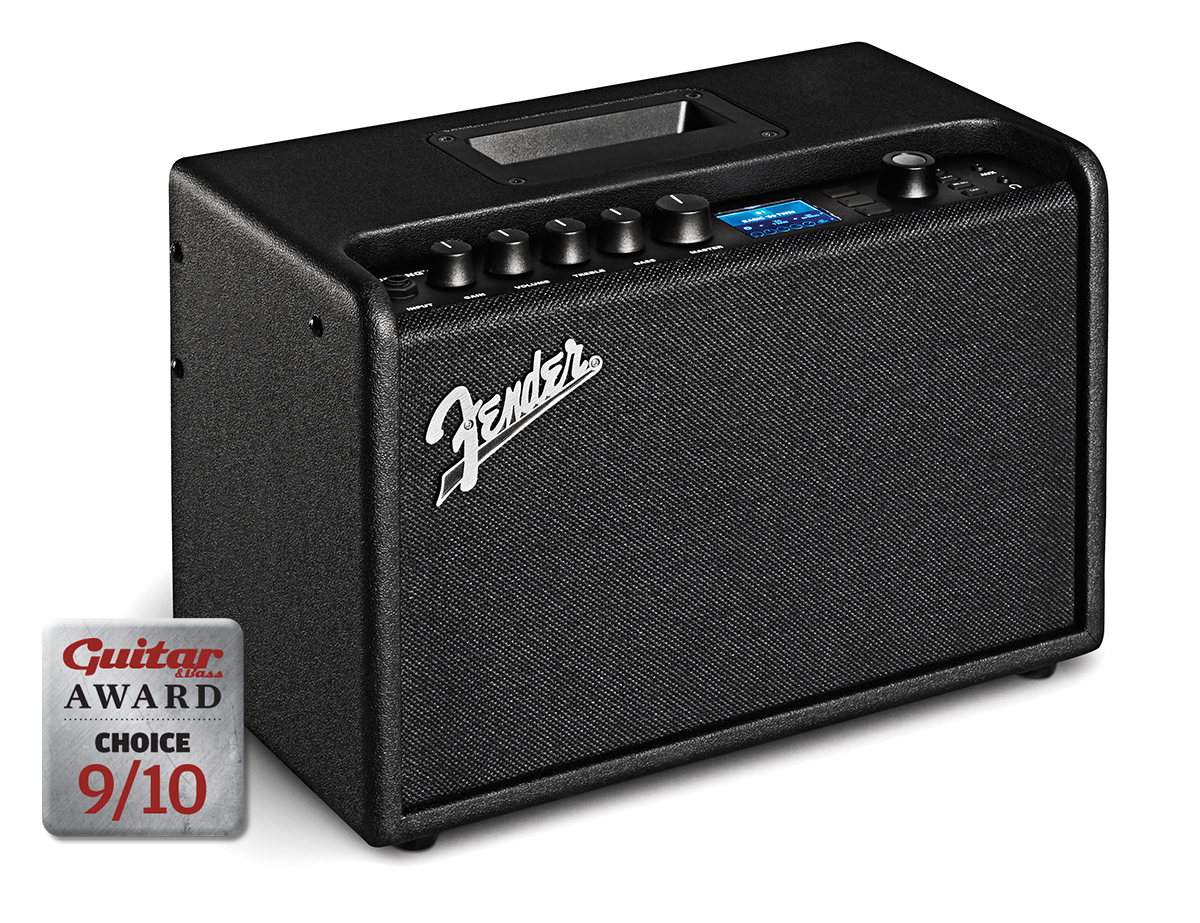 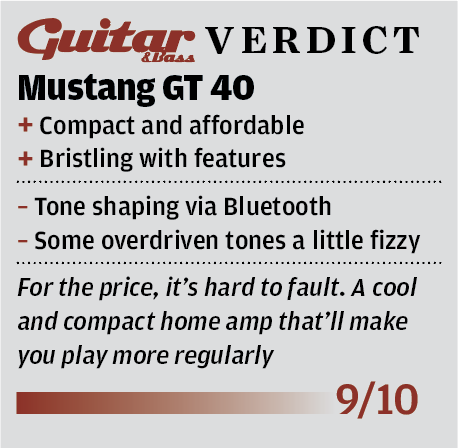 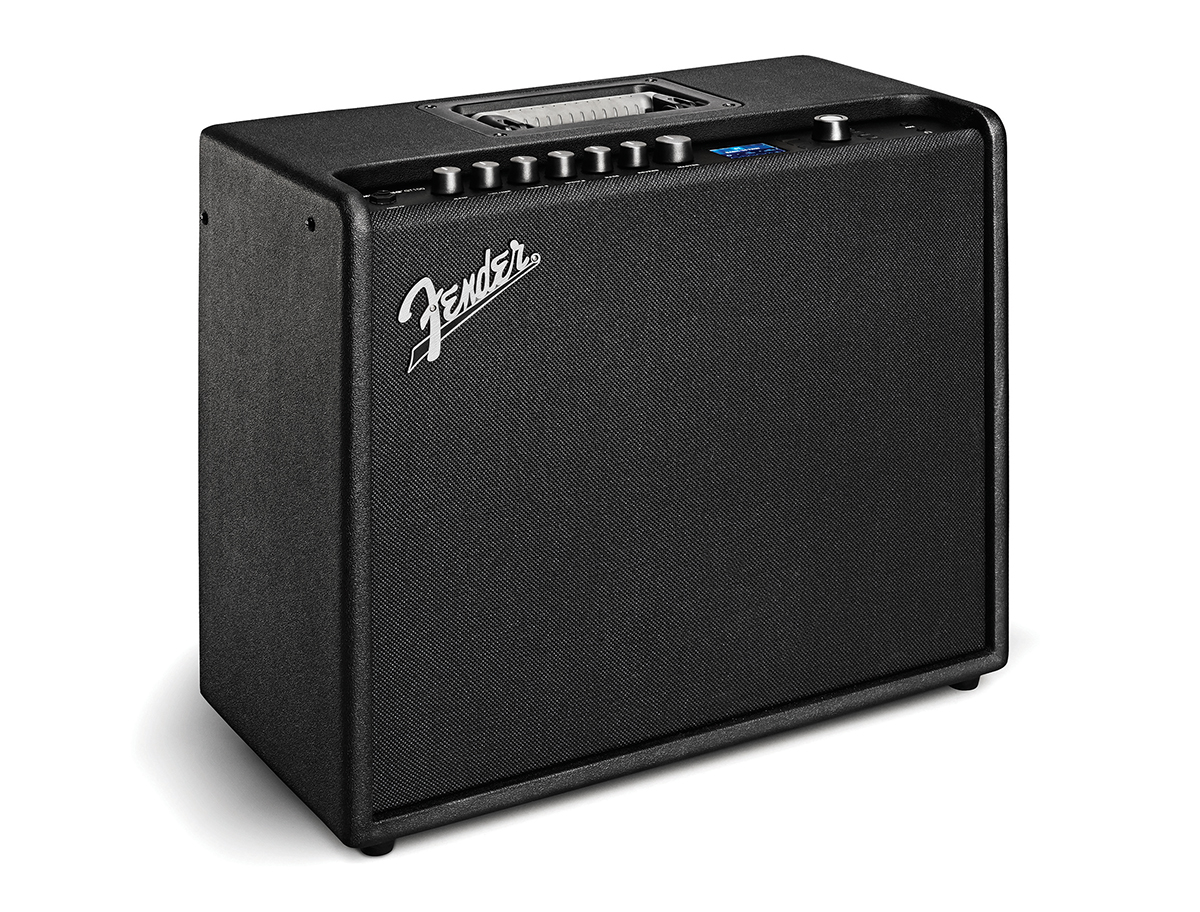 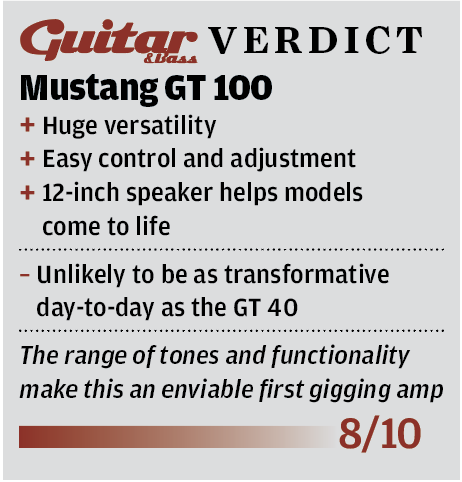