Find out why pro players are getting hip to the allure of Frank Brothers guitars as we take the Canadian company’s new Arcade Model for a spin. 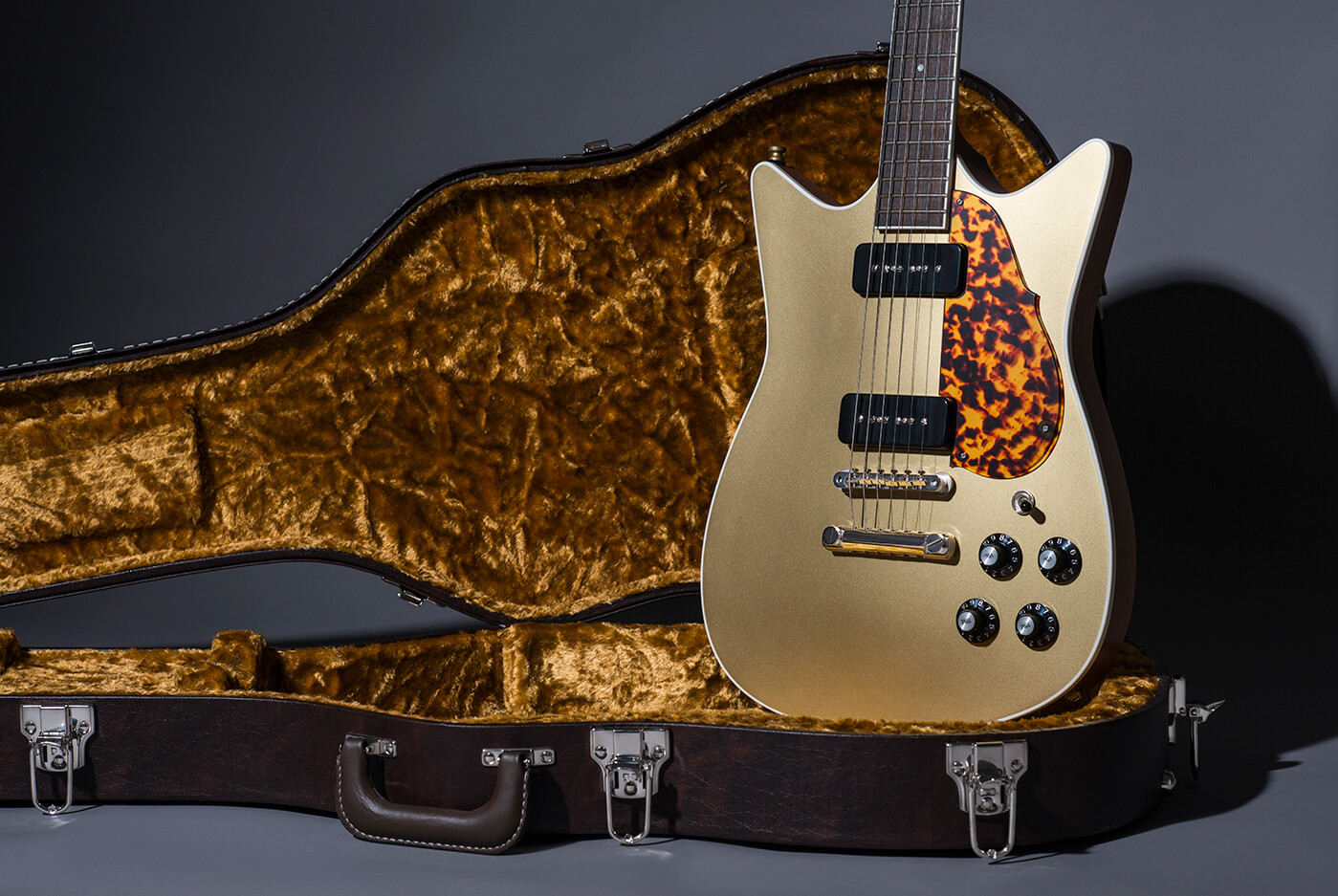 Our first encounter with the Frank Brothers Guitar Company was in late 2017 when the Ontario firm’s debut electric guitar design – the sublime chambered double-cut known as the Signature Model – waltzed in to the office and promptly smashed our hearts to smithereens.

Based in Toronto’s artsy Studio District, luthier twins Tim and Nick Frank (aided by older sibling and managing partner, Jon) build instruments that fuse vintage and modern influences with exacting attention to detail. Sweating the small stuff is in their genes: grandfather Philip was an acclaimed concert violinist and no stranger to a Stradivarius or Guarneri, while their award-winning audio engineer dad Jim worked with the likes of Alice Cooper and Peter Gabriel.

Prior to Winter NAMM 2018, the Signature Model (from £3,330 direct) was the only Frank Brothers guitar that you could buy. With a bigleaf curly maple front and back cut from the same billet, bookmatched and then press-laminated to an arched, chambered mahogany core that tapers in thickness at the edge, the Signature Model is incredibly elegant but also time-consuming to produce. Enter its solidbody sibling, the Arcade Model. 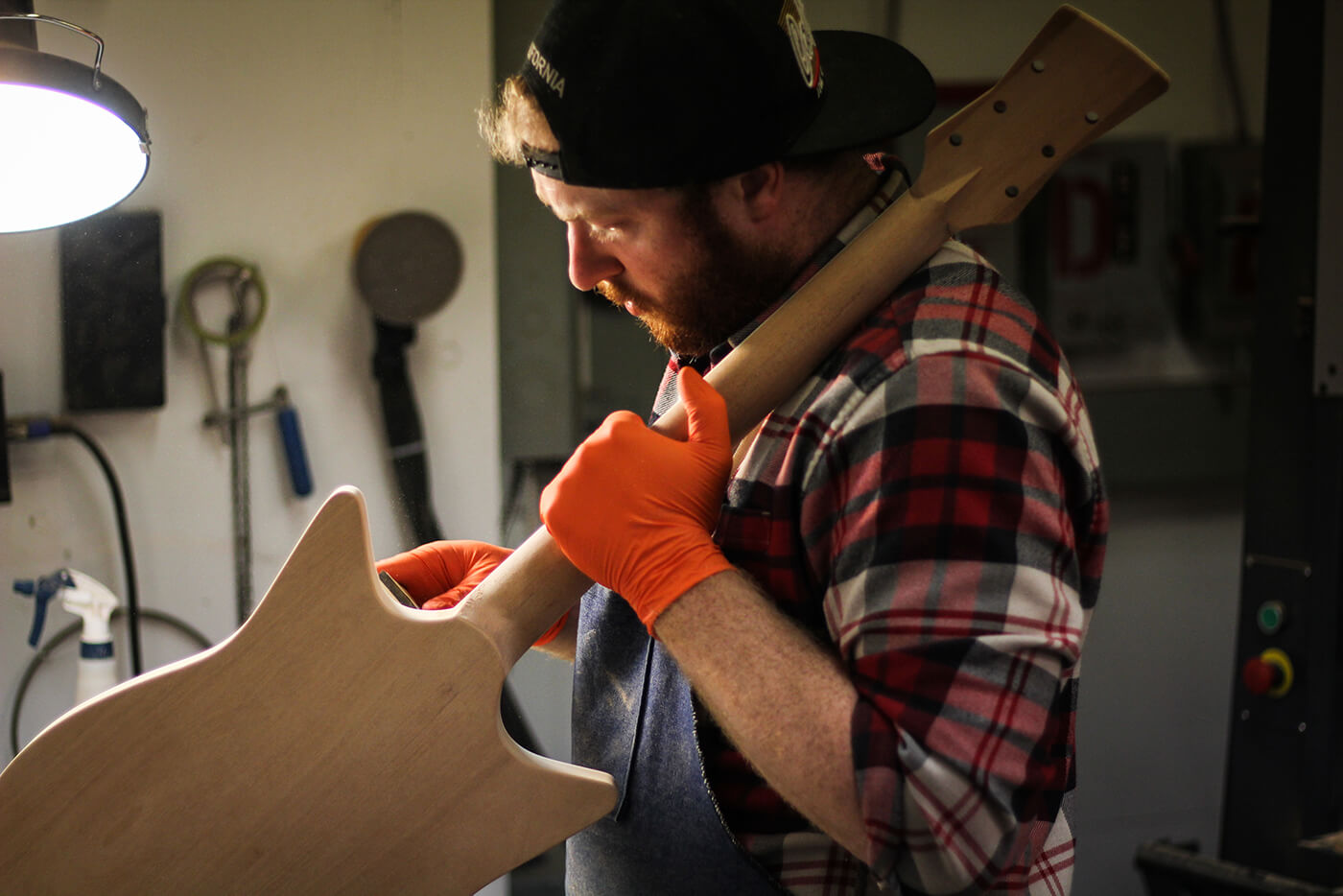 “The Arcade is the gritty, hard-driving little brother to the Signature Model,” says Nick Frank. “We wanted to offer something to complement what we had been doing with the chambered-body Signature Model, which really drives in its own lane in terms of tonality. The Arcade falls more into that classic ’59 tone with its solid, genuine mahogany body. It pairs amazingly well with PAFs and P-90s, and it loves higher-output pickups, too.

“The cool thing about the Arcade is that it still retains most of the features that make a Frank Brothers guitar stand out: the same body shape, carved top and back, diamond volute, and long-tenon neck joint with a hand-carved heel. It’s all Frank Brothers, but with a more classic, bluesy rock ’n’ roll sonic signature.”

We wonder if adapting the Signature Model’s unique design for the Arcade Model presented many challenges. “We were really conscious of the weight,” Nick admits. “We wanted to get the benefits of the additional mass without making it feel like you have a boat anchor strapped to you.

“We decided to make the body a touch thinner than the semi-hollow Signature Model. 3.175mm thinner, to be precise. We experimented with different body thicknesses, but that was really the best balance between the weight and the tonality we were trying to achieve. The Arcades clock in on average at about 8lb, where as the Signature Models are usually around 7.25lb.”

Our review model is a healthy 7.8lb, but should you desire something lighter – less svelte than the Signature Model, even – Nick reveals that the brothers have a guitar in the works that’s set to weigh in at around 6lb.

“We have also been building the first Ultra-Light,” he tells us. “Which is our double-chambered semi-hollow body. This first one is super-cool, and features a single f-hole, figured Hawaiian koa top, and a genuine mahogany body and neck. The goal was to build a guitar that could bridge the gap between solidbody and hollow-body guitar. Incorporating classic ES tones, without sacrificing the sustain and attack that our guitars have become known for.” 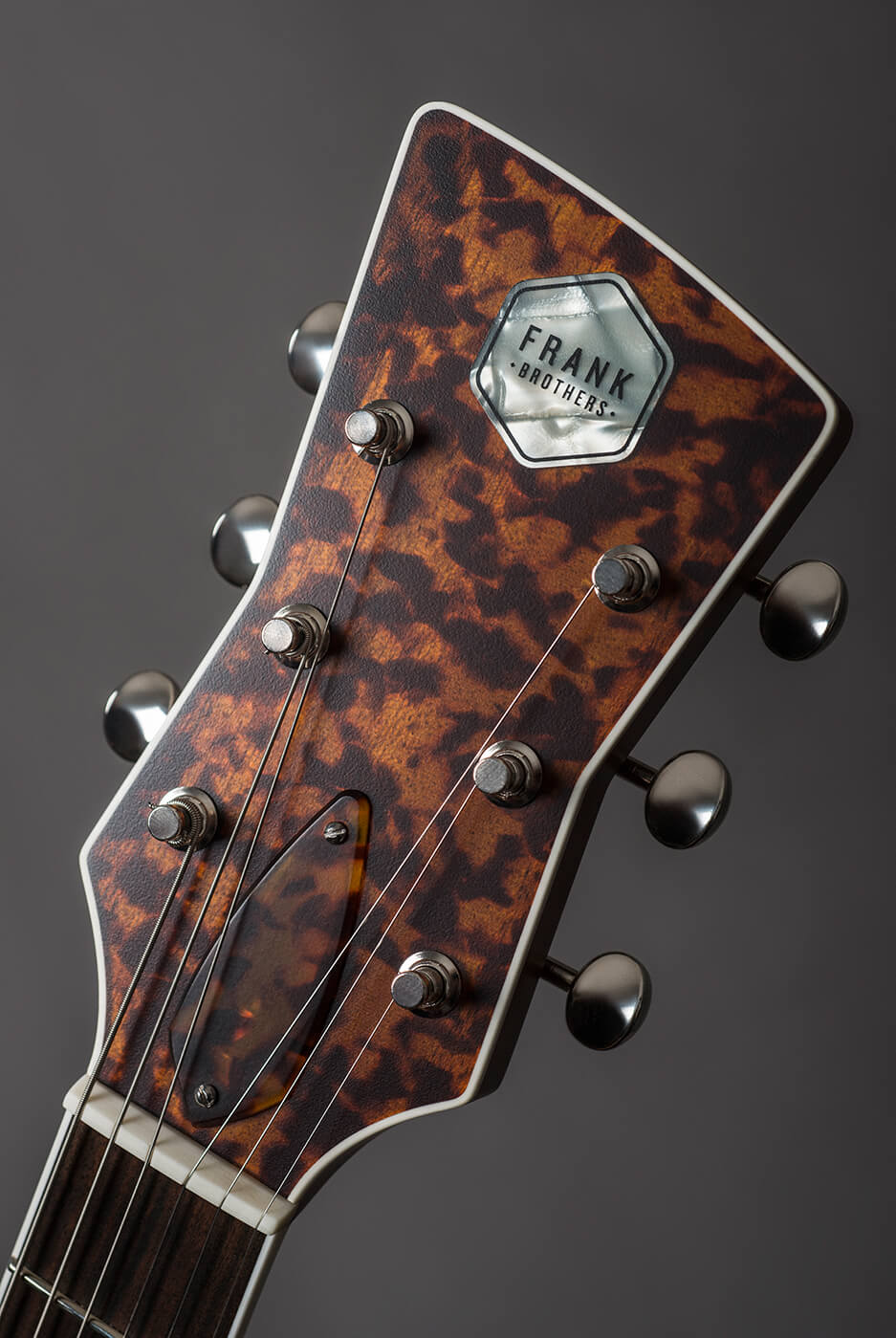 We can’t wait to get our teeth into that one. But back to the matter at hand, our review guitar comes more or less as standard aside from off-white fretboard and headstock binding, a satin top in Harvest Gold (a hue that’s closer to Fender’s Shoreline than Gibson’s Goldtop), and tortoiseshell for the headstock fascia, ‘Broken Heart’ pickguard and rear control cavity cover.

In the world of the Frank Brothers Guitar Company, the phrase ‘more or less standard’ translates as ‘earth-shatteringly cool’. Especially in this incarnation, the Arcade Model is a real head-turner. All that tortoiseshell along with those witch-hat knobs lends a retro accent to an instrument that feels rather futuristic when viewed and handled in three dimensions thanks to its clean, angular lines and a subtly arched mahogany/maple body that tapers at the edges. The binding hides a 1/8 inches (3.175mm) maple cap, while the total body depth including the mahogany back is 51mm at its centre point, slimming down to 35.3mm at the sides.

Once you’ve got past the smart FBGC-branded cardboard box that the instrument arrives in and opened its plush G&G fitted hard case, the brothers’ determination that their customers should have an experience that goes above and beyond the average – even at the boutique end of the market – is further reinforced by a an array of logo’d case candy.

There’s a premium strap, replacement screws for Schaller straplocks (should you not wish to employ the Arcade’s bespoke satin brass buttons), picks, a certificate of authenticity and a cleaning cloth.

There’s also a truss-rod wrench, which is handy as things have shifted a little on the way across the Atlantic. Happily, the slight buzz that results on the G and D strings around the ninth fret is easy enough to eliminate with a swift truss-rod tweak. On removing the tortoiseshell cover, even here, the attention to detail is second to none. Every screw on a Frank Brothers guitar is a flat-head machine screw that lives in a threaded brass insert (steel for the strap buttons) to ensure that they can be tightened without any fear of stripping threads – these are guitars built with the long haul in mind. 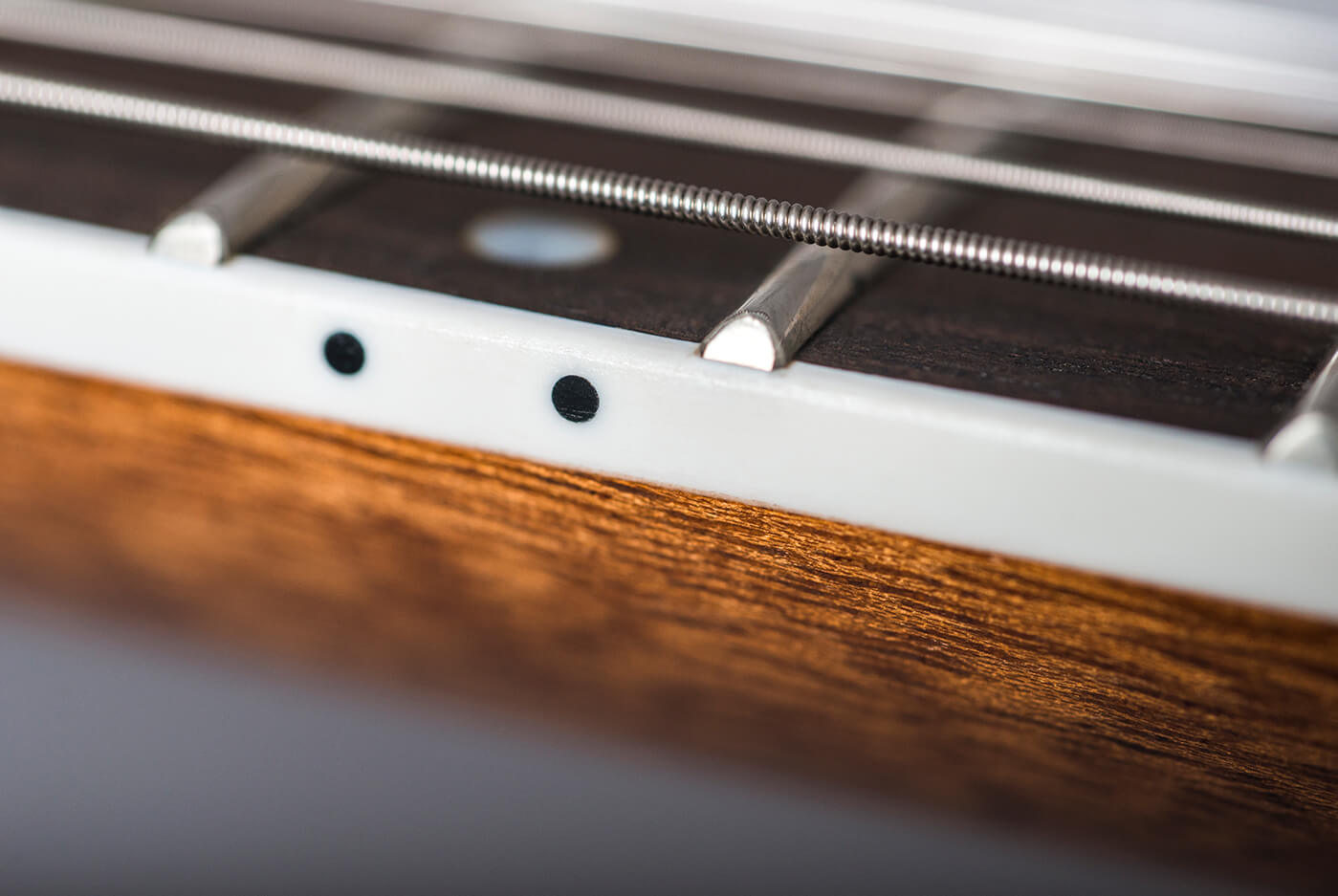 The mahogany neck is another virtuoso piece of woodworking from the brothers Frank. Finished in thin satin nitrocellulose, the profile is soft-shouldered and supremely comfortable medium C that flows from the exquisite diamond volute at the headstock end to the near-invisible join at the ‘blended’ heel. It feels as seamless as it appears and offers luxurious access right up to the 22nd of the guitar’s immaculately installed Jescar 51108 frets.

The neck shape, “is meant to strike a balance between big stocky necks, and thin ‘fast’ necks,” says Nick. “It’s a comfortable medium C but with a little off the shoulders, which gives it a bit of a faster feel while still retaining enough mass to keep your hand from cramping up around a really skinny neck. This neck shape has been really popular and is on about 90 per cent of our guitars! We also offer other shapes including a ’58 or ’59, a 60s soft V, as well as fully custom shapes.” 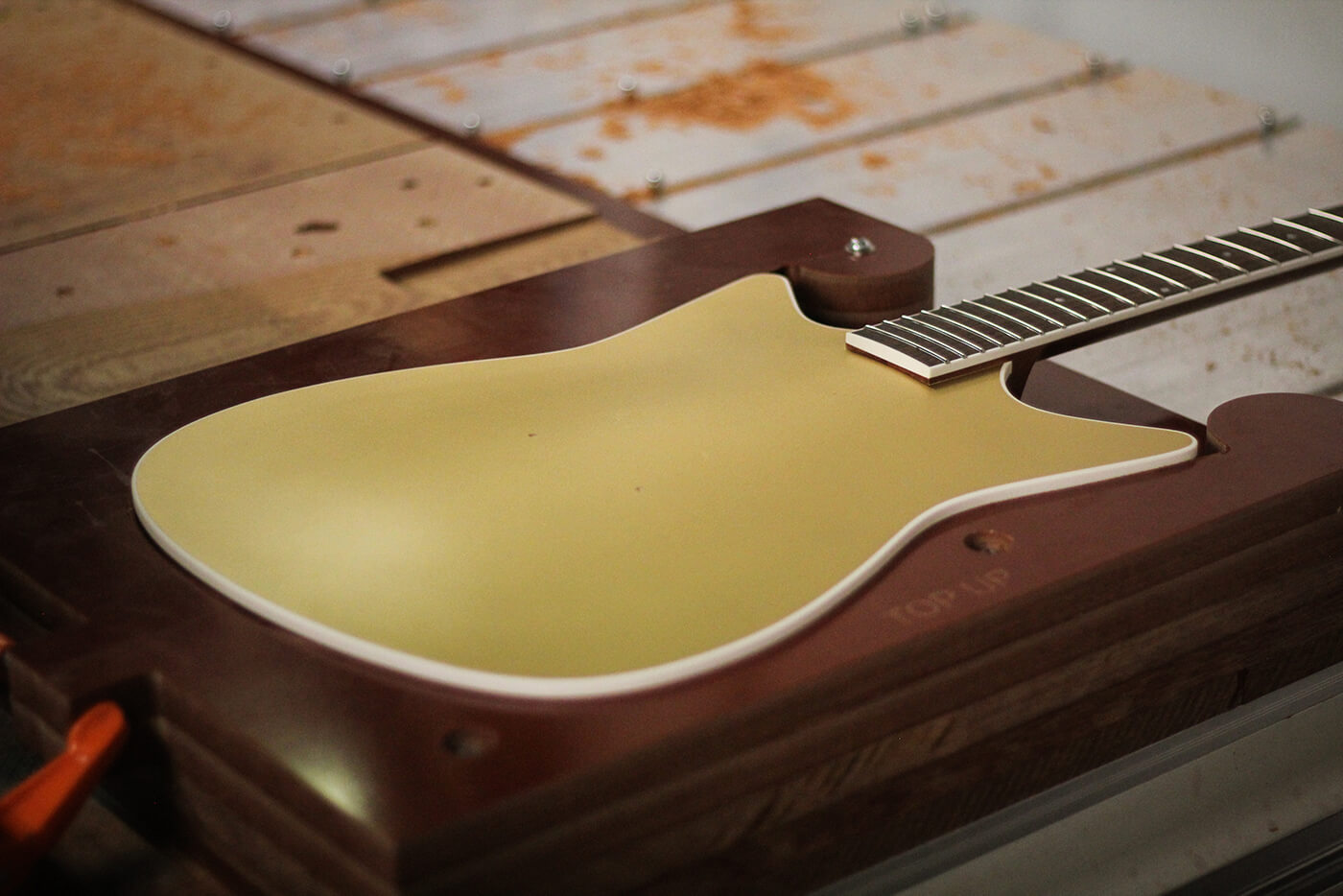 Before we get too carried away with all this effusive praise, some words of caution: neither superlative build quality nor a killer aesthetic are guarantees of stellar sonics. The great guitar storage facility in the sky is piled high with cobwebbed cases containing well-made and good-looking instruments that just don’t have what it takes to set pulses racing when plugged in.

We begin by setting the bar rather high, with benchmark P-90 solidbody tones provided by a ’62 SG/Les Paul Junior and ’54 Goldtop. Gibson’s P-90s got brasher and ruder throughout the golden era, so this pair of vintage instruments covers an awful lot of ground. Compared to the Junior, the Arcade Model’s Wolfetone Meaner bridge unit is smoother with less cut, but what it gives way in attack it more than makes up for in sustain and sophistication. 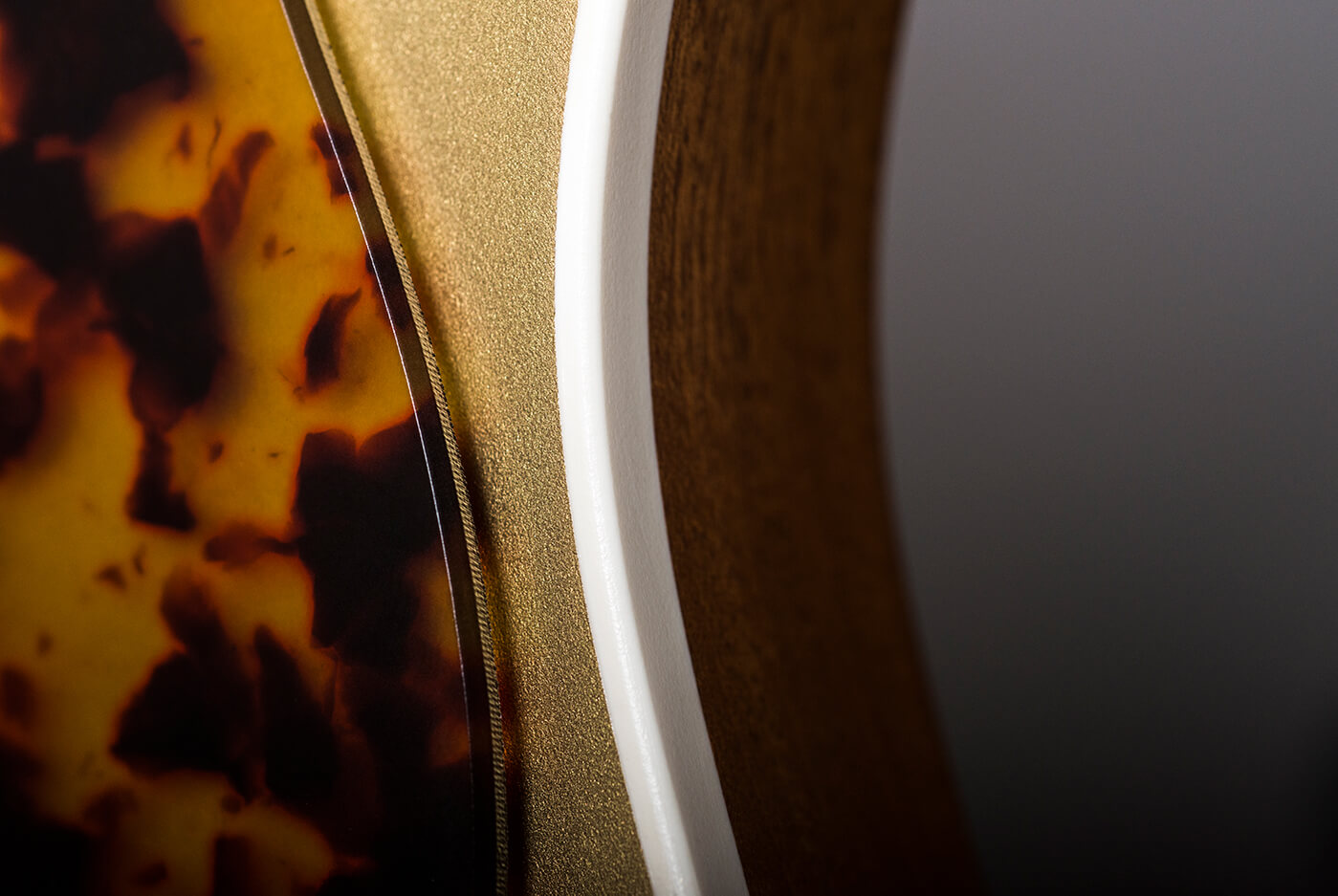 The LP Goldtop is a very different animal altogether – where the wrapover-bridge Les Paul hangs onto notes with an ethereal, almost foggy quality, in comparison, the Frank Brothers guitar’s single notes are more hi-fi and laser-like. It’s less ‘vintage’ in tonality but never sterile. The Arcade Model has less of that nasal quack, and more of an even balance when playing chords. The vintage instruments sound ‘older’ and more familiar – no surprises there – but despite tough opposition, our review guitar certainly isn’t outclassed.

If you plan on picking up a Frank Brothers guitar for a five-minute noodle then be warned: instruments as good as this have a habit of stopping time. Sure, there’s extraordinary clarity and precision, notes are complex, there are bags of sustain… all of these aspects of the Arcade Model’s appeal are quantifiable. But its most hypnotic – yet hardest to pinpoint – characteristic is the way in which it encourages you to step outside of the familiar.

Perhaps it’s the near-effortless playability that clears a path for expression. But just as there’s something inherently fresh and modernistic in the way that the brothers have approached the classic set-neck, double-cut blueprint, the Arcade Model encourages your fingers to find new places and shapes, too.

We’ve been playing the Arcade Model for an awfully long time before we realise that our Lazy J combo hasn’t moved beyond a hint of breakup and a splash of reverb.

In common with the similarly artful Lowden GL-10 – another solidbody star of 2018 – such is the precision with which this instrument has been constructed, irrespective of whether the brothers see the Arcade Model as the ballsier member of the family or not, it almost seems crass to play power chords or straight-ahead rock ‘n’ roll on it.

That said, we take the opportunity to mess its hair up a bit. Kicking in an old TS-9, adding some tremolo and rolling back the usefully-voiced tone controls takes us down to the swamp. We find a very cool array of slide tones in open D when we get there, and the guitar’s natural balance and clarity help control the chaos. Even with the supplied 0.010 gauge D’Addario strings, it handles deep open tunings remarkably well, with piano-like bass, right down to an almost baritone-like open C. We said the Arcade Model encourages you to venture into uncharted territory, didn’t we? 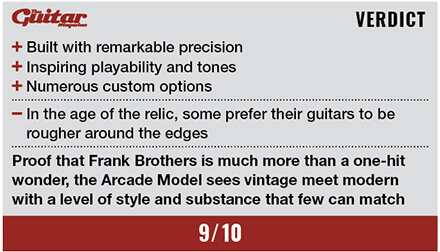 Have an idea for your dream Arcade or Signature Model? Talk to Frank Brothers… The Arcade Model starts at £2,700 and the basic spec includes a satin-finished mahogany neck and body, a gloss maple top and a Macassar ebony fingerboard. You can also choose from Lollar or Seymour Duncan P-90s and two- or four-pot wiring, and the guitar comes with a lifetime warranty.

“We are all about customisation and getting to the root of what a customer is trying to achieve with their guitar,” says Nick Frank. “We offer custom colours, neck shapes, and a variety of hardware, pickups, and wiring options for the Arcade Model.

“It’s amazing working with customers to spec out the guitar they’ve been dreaming of. Some customers want to dive deep into the tonality, feel, weight, style, neck shapes, et cetera, which is always an exciting place to start. Others have some basic goals but otherwise want to give us the reins.

“We want to offer more than just a guitar, but also an interactive custom experience. We provide customers with weekly photo updates that show their guitar’s construction. By the time it’s complete they’ll have over 100 photos that show the entire build process, as well as detailed glamour shots of the finished instrument.”

Visit frankbrothersguitars.com to find out more.