Freshman’s sturdy Maple Ridge series offers a selection of dreadnoughts and OMs, plus extra choice when it comes to cutaways, finishes and pickup systems. 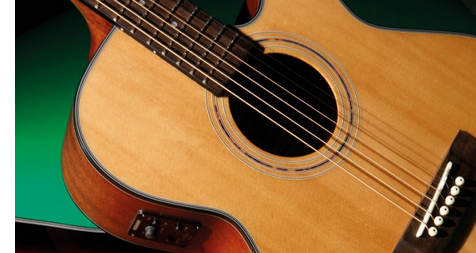 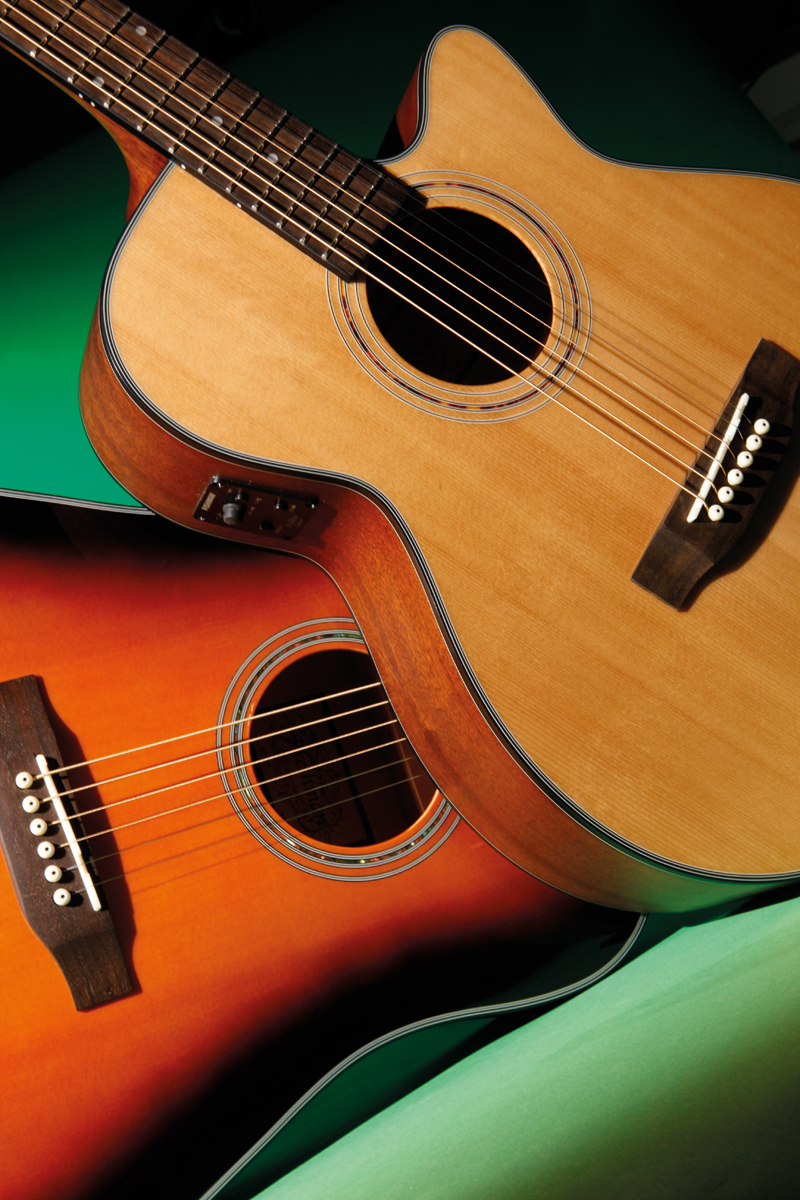 First of all, we should clear up something that may cause confusion. Freshman once had a series named ‘Cedar Creek’, but the tops of some of those guitars were actually made of spruce. Similarly, not all of the guitars in Freshman’s Maple Ridge series are actually made from maple – some are, but not the two we are reviewing this month.

According to the manufacturer, the Maple Ridge collection was ‘designed to accommodate a smaller budget without sacrificing any of the quality that Freshman is renowned for’. The shapes and sizes may be different, but this month’s pair actually have quite a lot on common. 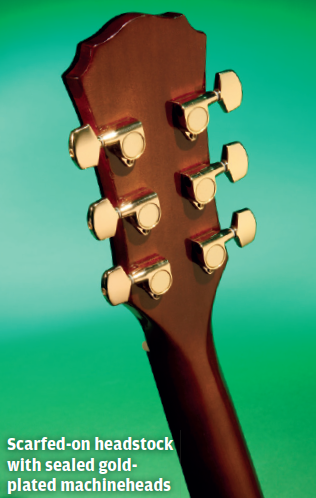 Both have solid spruce tops combined with laminated mahogany backs and sides – in fact, the entire Maple Ridge series has recently improved with A-grade spruce tops. The fingerboards, bridges and peghead overlays are rosewood and the necks of both guitars have the same chunky ‘C’ profile. Bone is the standard material for nuts and saddles, too.
Although assembled and finished in China, every Freshman guitar goes through quality control at Access All Area’s HQ in Scotland, where they also receive a final setup before being dispatched for sale. So let’s examine the finer details of each model more closely. 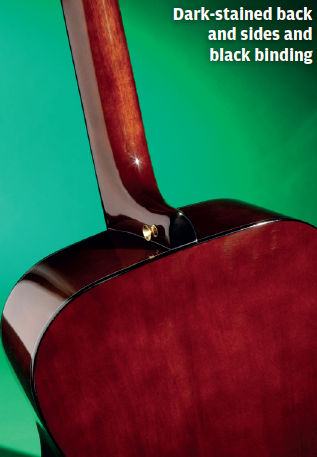 FA1DSBS
Of the two, this dreadnought is by far and away the most eye-catching. As if the shaded sunburst top wasn’t enough, the whole guitar is finished in gloss and polished to a deep lustre, and the closed-back diecast tuners are gold-plated. It’s a pretty decent sunburst too, following the Martin shadetop pattern, but with very dark edges graduating to a deep orangey amber in the centre.

The top is made from an attractive piece of spruce with narrow and fairly straight grain lines. The inside surfaces of the sides look like mahogany but the back looks more like maple and the outer laminates are hard to discern under the heavy brown tint of the finish.

It’s a similar story with the neck, but the wood’s grain is consistent with mahogany and it’s just about possible to see the tell-tale lines of the stacked heel and scarf-jointed headstock.
Black binding along the fingerboard and around the headstock provides a bit of luxury while also disguising the fret ends. The front and back body edges are also black-bound, but this time with contrasting white pin striping. The FA1DSBS does feel solidly made and has a straightforward practicality that inspires confidence. 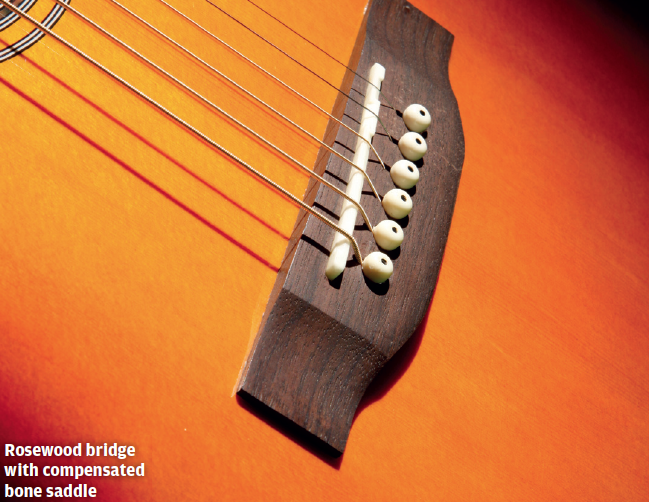 Sounds
Tuning up is an easy process thanks to the smooth tuners, and the FA1DSBS held its tuning well throughout our tests. The sound couldn’t be described as especially loud for a dreadnought, but it’s certainly loud enough. Similarly, the bass isn’t the deepest or the boomiest we have ever heard from a dreadnought, but that’s no bad thing because the low strings integrate well with the midrange and treble and there’s not too much mid-scoop. 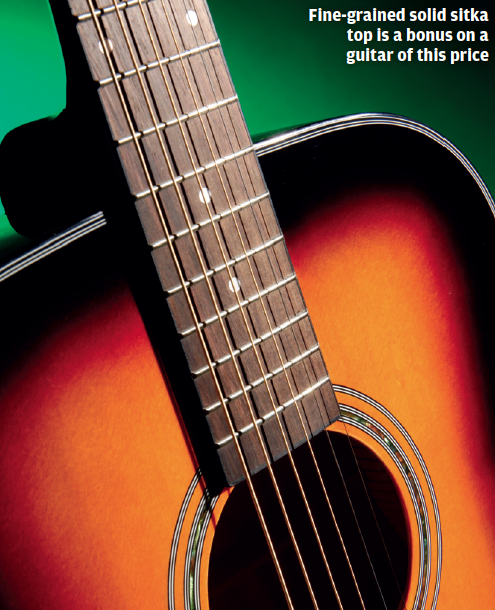 The plain strings ‘ching’ nicely over the top without being harsh or excessively bright. This makes the FA1DSBS easy to fingerpick and the response of the bass strings is tight and controlled enough to handle dropped tunings without flubbing out.

Overall the FA1DSBS acquits itself well as a general-purpose strumming and picking guitar. It has a pleasant if fairly generic dreadnought sound that is more useable than memorable, but certainly above average considering this guitar’s retail price. 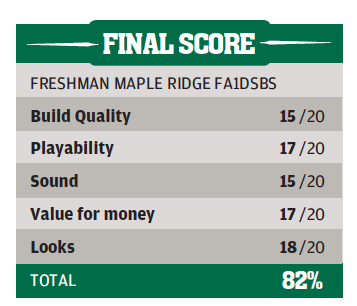 FA1AN
We have no concerns about the finish quality of the FA1AN. Satin finishes do tend to be more forgiving than gloss but even so, there’s a crispness and precision about the detailing this model that is slightly ahead of the dreadnought. It measures 38cm across the lower bout, with the maximum depth of the body being 10cm.

The spruce grain is a bit wider, and the back and sides look like mahogany both inside and out. We see the same neck profile and construction as before, but this time there’s an extra band of white on the headstock binding and the rosette has a tortoiseshell look rather than abalam. The tuners are identical apart from being chrome-plated. 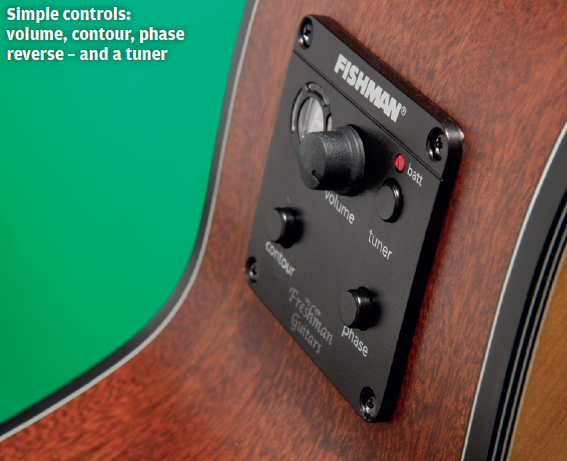 The significant differences are the body shape and the cutaway, but there’s also the Fishman Isys 301 pickup system with a control panel loaded near the waist on the bass side. The system carries the Freshman logo and is made for Freshman to the company’s specs.

The control panel incorporates a digital tuner with a battery status light. There’s also a volume knob, but tone control is restricted to a single Contour switch. Although the system is fairly basic, there is a phase switch to further shape the sound and minimise feedback. Power comes from an easily accessible 9v battery mounted on the lower bout right next to the jack socket.

Sounds
The FA1AN has the same hand-filling, proper acoustic neck profile as the FA1DSBS and it’s a similarly easy playing guitar. However, we think it’s also a nicer and more fulfilling instrument because the tone has that bit more character and sonic interest.
This ‘character’ takes the form of a prominent, woody and slightly boxy midrange. In a sense it’s not dissimilar to a parlour-type tone, but with deeper bass and more volume, and this led us towards picking out blues numbers and indulging in some Travis picking rather than going off in a folky direction.

It’s maybe not as loud as the dreadnought but the FA1AN is a decent rhythm guitar with an even response across the strings. It’s easy to make out the individual notes within chords, although a slightly rolled-off treble response makes the overall timbre woody rather than chiming.

Plugged in, the FA1AN is even more enjoyable. Even in the absence of bass and treble controls the system does a fine job of capturing the FA1AN’s natural tone. The contour control is subtle but effective, scooping the midrange very slightly. This effectively de-emphasises the FA1AN’s tendency towards boxiness and allows it to come over with a more familiar frequency balance and a bit more chime in the upper frequencies.

Fortunately this extra chime is not accompanied by the harshness that is all too common with undersaddle piezos – particularly those fitted to entry-level guitars. The output level is adequate, but we were obliged to crank the input gain of preamps reasonably high to achieve an optimum signal level. Even so, we were able to achieve reasonably high volume levels without any feedback issues, and found the phase control served more as a tone shaper than a feedback controller. 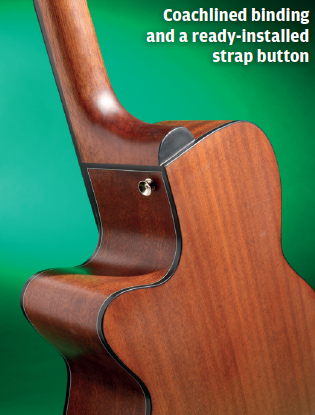 Verdict
With £100 between them these two guitars are not that far apart in price and they share the same specs of solid spruce top and laminated mahogany back and sides. That being said, their sound and response is quite different – and they also feel very different from a player’s perspective. The gloss finish does make the FA1DSBS feel like it is coated in plastic to some extent, whereas the FA1AN’s satin finish doesn’t present the same perceived ‘barrier’ in feel between the hand and the neck. 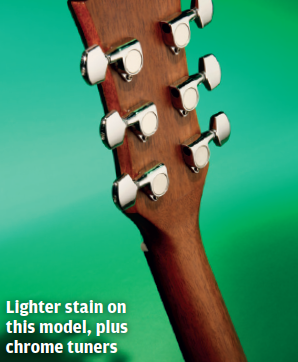 The sub-£300 price is a very crowded section of the acoustic guitar market. The FA1DSBS has a solid feel that inspires confidence and an enjoyable tone, but there’s nothing about it that we would describe as exactly outstanding. Even so, it’s a very decent guitar for the money. If we had to choose between the two, though, the FA1AN would be the one to go for.

As well as sounding more engaging, there’s a classiness about the finish that the FA1DSBS doesn’t quite manage to match, and the pickup system is hard to fault. Prospective purchasers may also be interested to know that the Maple Ridge series comes with a lifetime warranty for the original owners. 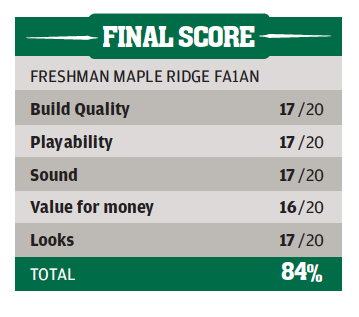