More sophisticated than passive attenuators, reactance amplifiers can boost as well as reduce your amp’s output level, opening up a world of possibilities. 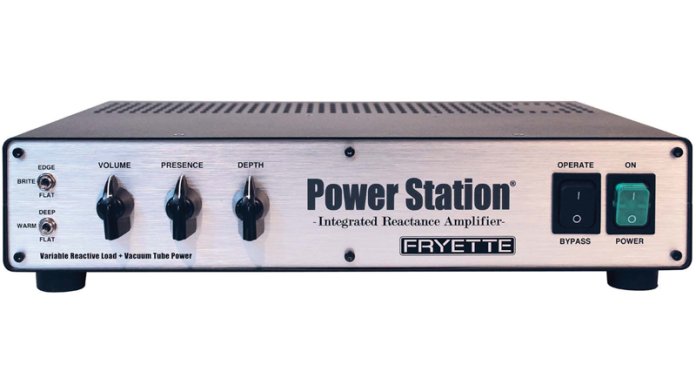 The practice of feeding the line output of an attenuator into a separate power amplifier is nothing new, but all-in-one solutions certainly are. We were very taken with the solid state Bad Cat Unleash when we tried one out a while back because, in addition to sounding absolutely superb, it’s very small and pleasingly lightweight.

Even so, given the choice, most of us would feel more enthusiastic about having a set of power valves between our amplifier and speakers than transistors.

That’s where the Fryette Power Station comes in. It’s a reactance amplifier based around a 50-watt amp running a 12AX7 phase inverter and a pair of 6L6 power valves. The volume control is continually variable, so there are none of the compromises inherent with crude switched increments. This one transitions smoothly from the full 50 watts to complete silence.

The amp input and speaker outputs have independent impedance switching with 4-, 8- and 16-ohm options. So you can run a 4-ohm Fender Champ or Vibrolux into a 4-, 8- or 16-ohm cabinet, but there’s no 2-ohm setting for 4×10-inch amps such as the Super Reverb and tweed Bassman.

In addition to the amp input, there’s a line input, enabling users to forget all about regular guitar amps and connect digital modellers such as a Line 6 Pod, a laptop or even a tablet running amp simulation software, directly to the valve power amp and a speaker cabinet.

On the front-left, there are two voicing switches. Each one has three settings and they act on the Power Station’s resistive load section. Of course, you can consider them as equalisation controls, but the primary function of the voicings is to compensate for differences in the way we perceive frequency content at various volume levels. The upper-frequency settings are edge, brite and flat, and the low settings are deep, warm and flat. At high volume, the flat settings are the default positions.

The Power Station features more conventional equalisation, too. Presence and depth adjust the power amp’s frequency response and the controls are continually variable. You even have the option of using the equalisation controls and the voicing switches simultaneously.

The operate switch doubles up as a standby and bypass switch when an amplifier is connected to the amp input; it puts the Power Station into standby mode and automatically routes the amplifier output to the speaker cabinet. We’ll come back to this later, when I assess whether the Power Station colours the tone at unity gain.

A lot of thought has gone into the buffered effects loop. It has a low-impedance send and high-impedance return, along with a hi/lo switch to set the signal level in the loop for stompboxes and rackmount effects. You can even plug a guitar or bass directly into the power amp for loud and clean tones.

There are two speaker outputs, but only one speaker impedance selector switch. That’s no problem, because if you want to run two 16-ohm cabs you connect them to the speaker outputs and select 8 ohms. Similarly, two 8-ohm cabs in parallel require the 4-ohm setting.

If you are using just one cabinet, connect to output one, because it has an open load protection feature. If no cable is connected, the Power Station will remain locked in bypass/standby mode and the front-panel switch will become inoperative. This safety feature is designed to protect your amp if the speaker gets disconnected.

I started by running a blackface Fender Vibrochamp through a closed-back cabinet with two 12-inch speakers. I dialled in the tone controls and set the volume for the Vibrochamp’s edge-of-break-up sweet spot. Once I was happy,  I placed the Power Station between the amp and cab, set all the tone-shaping controls for a neutral response and adjusted the level control for unity gain.

There’s only one thing worth mentioning at this point – I couldn’t detect any difference in tone or dynamic response, whether the Power Station was switched in or out. Although many of us equate valves with overdrive and distortion, there’s a reason why they still feature in high-end hi-fi amps; in the right configuration, valves can sound fantastically clean, clear and free of distortion.

As I eased up the level control, nothing fundamental changed – except things got louder. The Vibrochamp hadn’t been pushing the speakers at all, so with a bit more welly behind them I could discern more compression and richer harmonics. Therefore, any changes at higher levels are probably just speaker and cabinet colouration.

With reduced level, the perceived frequency response changes in line with expectations. There’s less bass weight and you lose some cut and definition in the upper frequencies, but that’s no reflection on the Power Station. The voicing switches and tone controls can be used individually or together to compensate; my preferred method was to get into the right ball park with the voicing switches and then fine tune using the tone controls.

The equalisation is so natural sounding it can also be used to enhance your tone. For instance, you can beef up the low end of a wimpy amp or tame boominess. Dark-sounding amps can be made clearer, or you can sweeten harsh edges. The point is you are in control, and you’re not stuck with a sound when you attenuate.

There are only two things that prevent the Power Station from getting an unequivocal thumbs up from Guitar & Bass. Firstly, there’s no effects loop bypass switch – either on the unit or via a footswitch. That may seem a pedantic criticism,  but if you are running a digital effects unit or a tape echo in the loop, you may prefer to switch it out of the signal path when it’s not being used. Secondly, I thought that having two footswitchable level presets was one of the Bad Cat Unleash’s most attractive features, but the Power Station provides just one fixed setting.

In all other regards, I can’t fault this product. I have two gear-nut friends who have been gigging with Power Stations for the last year or so. One attenuates his JTM45 clone and the other boosts his beloved ’56 Vibrolux so he can play it at any venue, regardless of size. I can understand why they’re hooked on the Power Station because it’s simply outstanding. 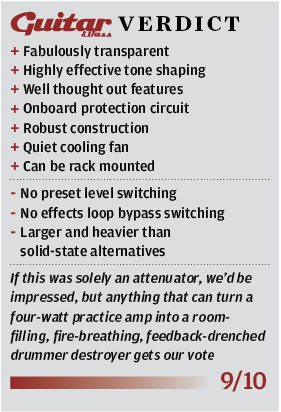