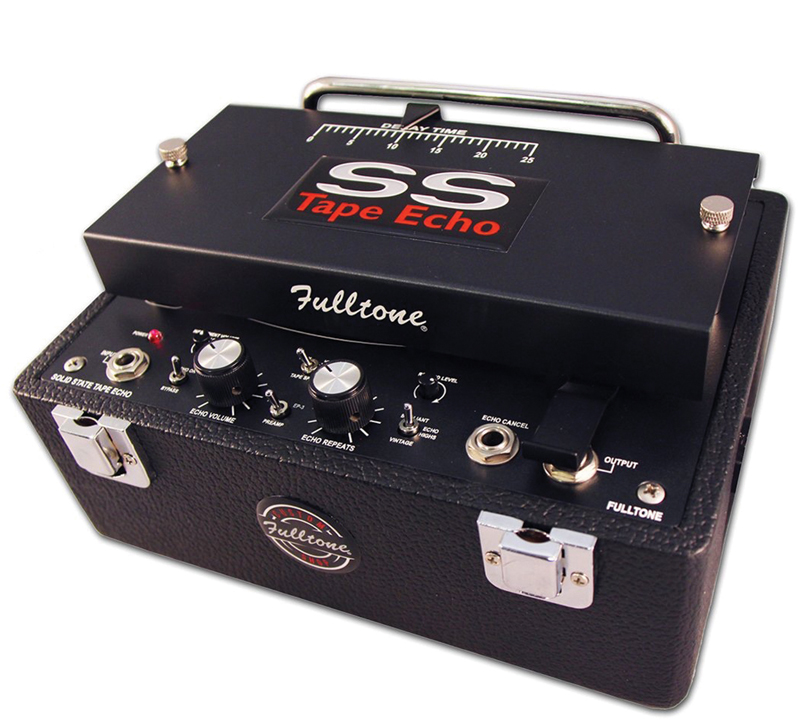 Let’s square up to the elephant in the room straight from the off. The Fulltone Solid State Echo (SSTE) costs the same as 14 Mooer Reecho delay pedals and you could fit eight of them in its footprint. It will need regular professional maintenance to ensure it always sounds perfect and it will require a new tape cartridge every year, subject to usage. The cost of a new cartridge is equivalent to the price of another Mooer pedal.

When Mike Fuller of Fulltone announced that his interpretation of the Maestro Echoplex EP-3 solid-state delay unit was due to be released this year, guitar forums lit up with expectation – along with the ubiquitous naysayers. Fuller had mooted a solid state alternative to his valve-driven Tube Tape Echo as far back as 2009, so has the wait been worthy of the hype?

Before we try to answer that, let’s offer up some background on Fulltone. Most guitar players will have heard of, owned or know someone who has used a Fulltone OCD pedal. Fuller pulls no punches in describing his product range as some of the best pedals available to buy, and we would agree.

In 2004, Fulltone launched the Tube Tape Echo (TTE) delay unit and it was a beast of a machine with an equally beastly price tag. The TTE is based on the tube-driven Maestro Echoplex EP-2 unit of the 60s and replicates those vintage tape delays perfectly and reliably; it can be found in many studios around the world.

It’s gone through a variety of updates and improvements along the way, leading to the rather smart-looking black-cased model that’s available today.

The SSTE is housed in a similar but much smaller tolex-covered wooden enclosure with a removable lid, and shares the DNA of those early EP-3 units beloved of many a guitarist – we’re looking at you Jimmy Page and Brian May – for their preamp sound.

Fulltone has worked hard to eradicate the issues that plagued those Maestro units (most notably the shaky reliability and the excessive hum). The SSTE is more of a homage and not a direct copy of the EP-3; and while we’re on the subject of preamps, the SSTE has an identical TIS58 JFET circuit to the first EP-3 produced, which allows you to achieve those cutting highs without the bass muddying up your tone.

The SSTE’s launch didn’t quite go as planned as the first 80 or so units sent out to dealers developed a fault with the capstan rubber roller (a critical component that moves the tape around the spools), resulting in very wobbly repeats. Fulltone was quick to rectify the issue and offered to send out free replacement rollers. Teething issues well and truly out of the way, it’s time to plug in and play. 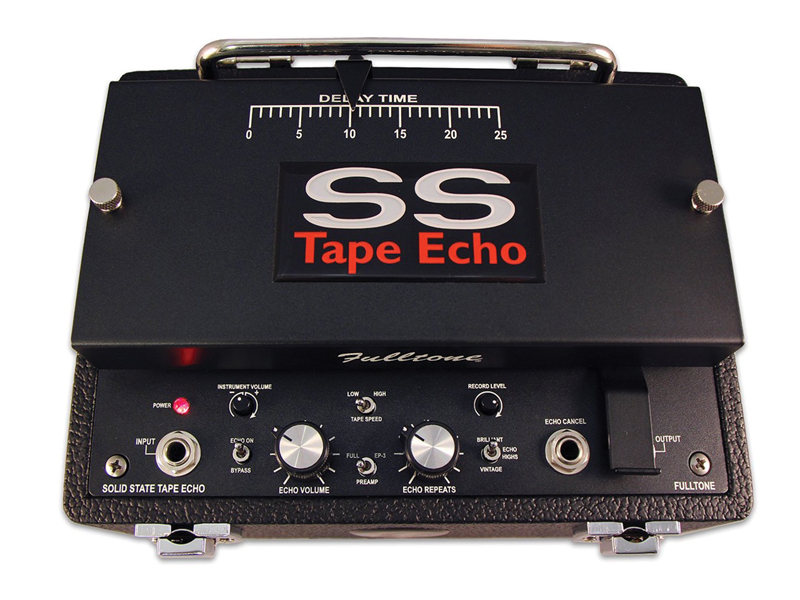 Having had the opportunity to use a 70s Maestro EP-3 unit – and especially given that this is a real tape echo machine with moving parts, so there are operating sounds – we weren’t expecting the SSTE to be nearly as quiet as it is.

You still get the option to use the SSTE as a preamp-only unit, with the ability to select ‘full’ or ‘EP-3’ modes, but you probably won’t want to part with £729 for this function alone when the excellent Xotic EP Booster pedal does the same job for £100.

Let’s move on to the controls available to the player. There are two small control knobs that allow for the adjustment of instrument volume and recording levels. An impressive clean boost of 10db is available, which makes great use of the JFET preamp and allows for those distinctive treble tones, as we mentioned earlier.

The delay time available is a full second. That may not sound like much compared to some modern, pedalboard-friendly digital options on the market, but that single second sounds rich and full. The movable playback head can take you from authentic vintage slapback to studio-like EMT140 plate reverb tones and full-on dreamy delays for the shoegazers among us.

Manipulation of the controls for echo volume and echo repeats can deliver full-on oscillation, and along with a neat toggle that allows you to select brilliant and vintage modes for the echo highs, it’s certainly not short on options.

You’ll have to look elsewhere for stereo in/outs, as it’s a strictly old-school mono experience here. There’s an echo cancel input that, with the optional Fulltone footswitch, is a passive option to kill the delays without any horrible pops as it routes the signal away from the switcher box.

G&B gave the SSTE a spin using a range of guitars (a vintage Gibson Les Paul Deluxe, a Fender Telecaster 1952 reissue and Gibson Les Paul Studio) and amplifiers (Fender’s ’68 Custom Princeton, a Supro Dual-Tone 1624T and the new Vox AC10C1) and the tonal variations of each combination of guitar and amp require some adjustment of the SSTE.

The Les Pauls have a tendency to achieve almost distorted repeats, unless you reduce the record level knob, but flicking the echo highs switch to the brilliant setting lends a subtle openness to the delay tone. Single coils inevitably benefit from a little more record level and to our ears, with the preamp in full mode and the echo highs on vintage, you’re transported back instantly to those thick and warm echo-delay tones that are peppered across so many great albums from the late 60s and 70s.

The SSTE really does reward those who like to make small adjustments, play their guitar and then tweak things again. We lost ourselves for hours fine-tuning the controls on the unit to match each amp and guitar and then photographing those settings to save for future use.

This is a player’s effects unit. It will reward those willing to invest a lot time and effort (and money!) in fine-tuning the controls to suit their rig. It’s also a fantastic machine to have around in a studio environment and it certainly looks the business.

Would anyone at a gig know that you’re playing through a real tape delay unit that probably costs more than you’ll ever earn from said gig, rather than a cheap digital delay pedal costing the price of just a few rounds of drinks? Probably not.

But this brings us firmly into the territory of those unseen pleasures of guitar playing – that feeling you get when you’re playing a particular guitar, using a coveted pedal or when you find `your’ sound in a special amp. Sometimes it’s not about your audience at all, it’s about the feeling that you’re playing with something special and your interaction with that particular piece of gear. This way inspiration lies…

The Fulltone SSTE is a joy to play with. It’s mechanical, solid and alive and even in this digital era there’s something that’s still hugely appealing about seeing and hearing moving parts.

There are no secondary controls or fancy beaming of digital effects presets from your iPad or your mobile phone. True, it’s temperamental and it needs kid gloves, but for the right player this will be a joy to own. Hopefully, like its valve-powered big brother the TTE, the SSTE will find its way into recording studios around the world so that those who can’t afford it can experience the thrill of using it.

In the days of tiny stompbox effects, fly rigs and lunchbox amps, it’s easy to think of a solid-state tape echo unit as an anachronism, but much like the 100-watt stack, machines of this type have earned their place in guitar folklore and as such, everyone should get the chance to play through one at least once, however impractical it seems. 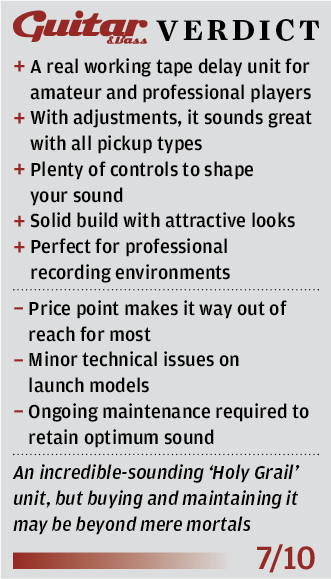