Will Chris Vinnicombe be helpless to resist this Old Black-inspired electric with the heart of a Goldtop and the damage already done? 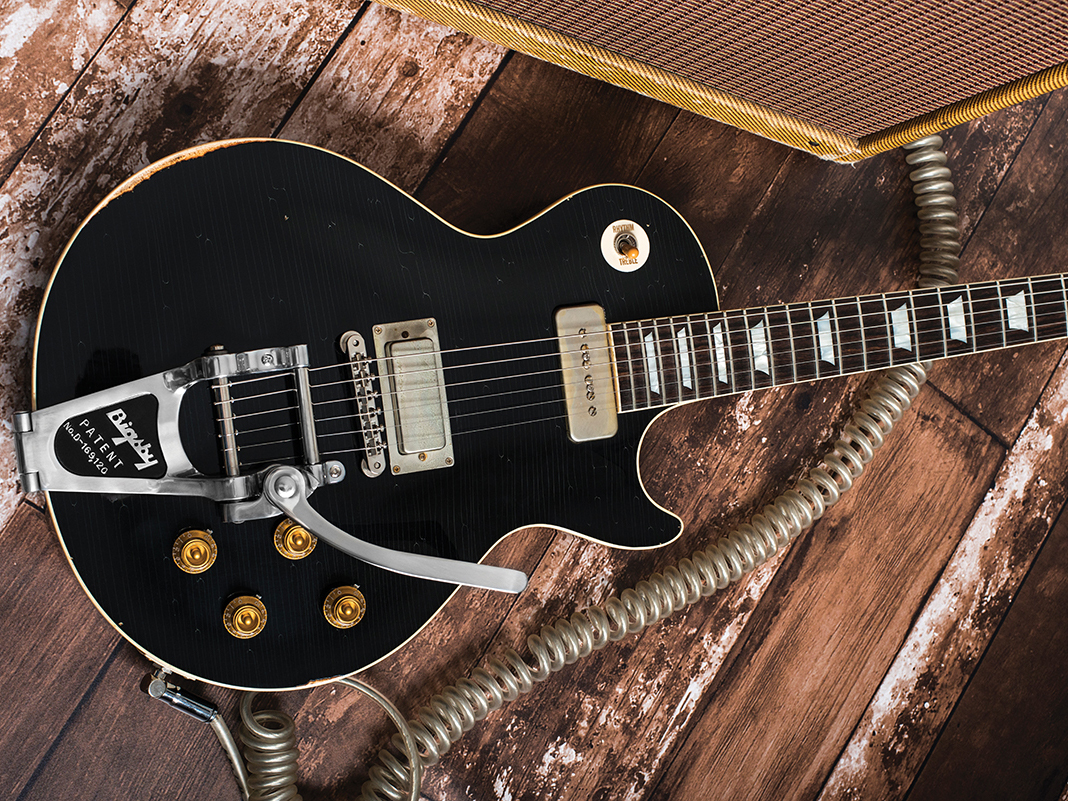 When we were hunting for a suitable electric guitar to accompany the 1959 Fender 5E3 Deluxe that graces the cover of this month’s tweed extravaganza, it seemed rude not to pay tribute to one of the most recognisable and vicious-sounding tweed rigs of them all.

Although not an official artist model, this 1956 Les Paul Heavy Aged was ordered through Gibson Custom’s Made 2 Measure program by the guys at Coda Music in Stevenage as an homage to Neil Young’s long-serving LP known as ‘Old Black’.

Old Black has been heavily modified over the years – believed to be a ’53, it was spray-painted black before Young acquired it in a trade from Buffalo Springfield bandmate Jim Messina.

A Bigsby tailpiece was already in place in time for the recording of Cowgirl In The Sand with Crazy Horse in January 1969, while a Firebird mini-humbucker was added to the bridge position – replacing a short-lived DeArmond Dynasonic – in 1972. Some have speculated that the guitar was re-necked in the 1960s and it has also been modified with a ‘direct out’ switch to bypass the onboard potentiometers and caps, and hit the front end of the amp as hard as possible.

Lacking both the bypass switch and the aluminium plates on Young’s guitar, our review guitar stops short of being a full replica but nevertheless manages to channel the spirit of Old Black within the realms of the options offered by the Made 2 Measure process. Rather than being modelled on a ’53, it utilises another Goldtop as the ‘base’ model – the Historic 1956 Les Paul Goldtop Reissue, aka the R6. 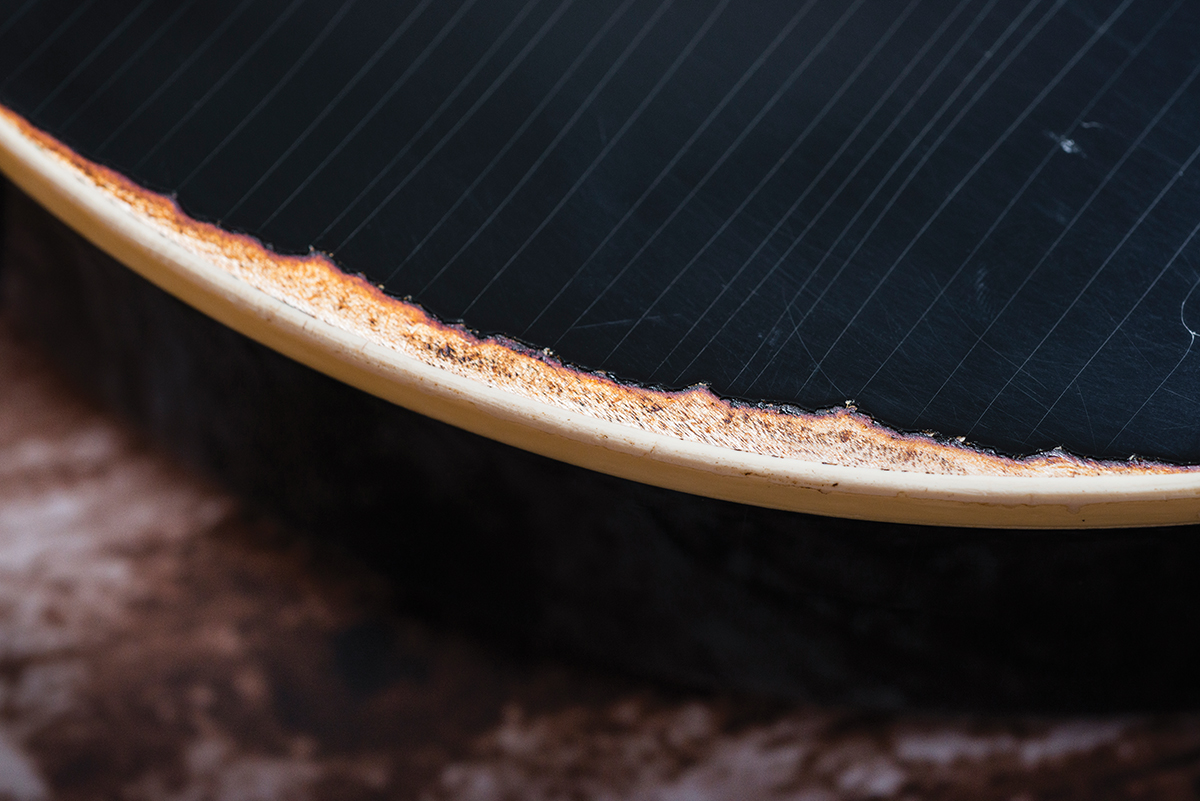 Standard ‘R6’ specifications include a hide-glue neck join, a vintage-correct neck tenon that extends into the neck pickup cavity and a Historic truss-rod assembly with no tubing. The fretwire here is a little fatter than vintage and Gibson’s current Bumble Bee tone capacitors aren’t the old-school paper-in-oil type but it seems a little churlish to complain about either transgression when the guitar is a slinky player that sounds very good indeed, but more on that shortly.

The Ebony gloss nitrocellulose finish may not be as gouged and worn as Young’s guitar, but there’s still extensive faux playing wear here: we have simulated rub-through to the bare wood around the back, in the forearm area on the top and along the fingerboard binding on the treble and bass sides of the neck.

While visiting its Nashville factory, we’ve witnessed Gibson Custom employees hand-ageing instruments; while their surprisingly primitive tools and processes can produce results that look a little stylised next to a vintage example, the various dings and razor-cut lacquer checking here makes for an appealing overall look that will bed in nicely when the guitar finds a permanent home and the owner adds some real-life road wear of their own.

In Use
As usual, a nicely rounded 50s-style Gibson neck instantly feels like ‘home’ for this writer but fans of slimmer profiles shouldn’t be intimidated – it’s no monster and, in combination with the aforementioned medium-jumbo fretwire, this is a real joy to play and one of those guitars that encourages you to push the boundaries of your abilities a little harder. 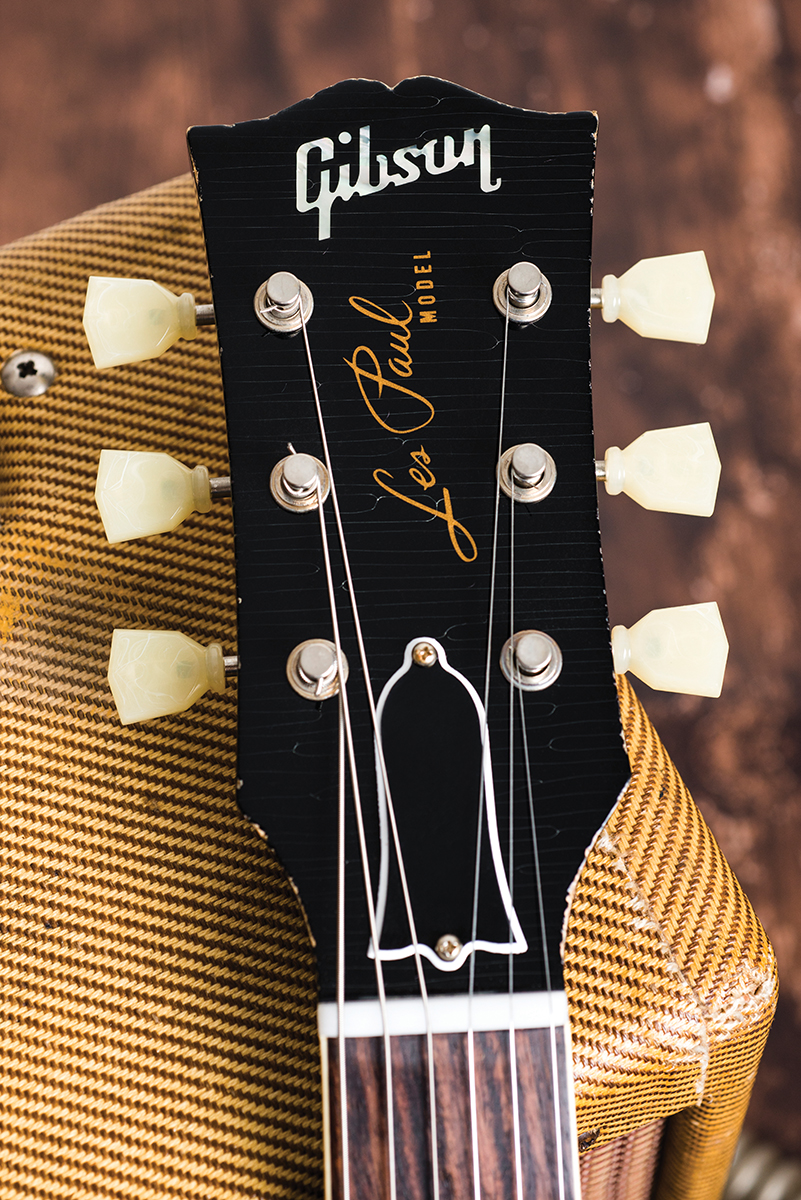 Bigbsy sceptics fear not; the proximity of the B7’s tension bar to the ABR-1 creates a similar break angle across the bridge to that of a stop tailpiece, while the nylon nut helps reduce friction and keep tuning solid, even with vigorous whammy bar use.

Plugged into a tweed Deluxe and with a Strymon Flint supplying additional ambience it’s nigh-on impossible to resist the pull of desolate, cinematic atmospherics in the vein of Neil Young’s Dead Man soundtrack or the abrasive electric guitar work of Daniel Lanois.

As you would hope when playing an instrument in this price bracket, there’s a world of inspiration here and for the right player it’s hard not to lose hours just drinking in the possibilities unlocked by this guitar. Getting the choice of amplifier right is key, too.

The complex harmonics, easy musical feedback and touch dynamics of a small tweed allow you to go from sweet to savage just by varying picking-hand intensity. Through an amp with a scooped, blackface-style midrange, the mini-humbucker at the bridge can sound a little brash and scratchy, but the chewy mids of a tweed suits it perfectly. 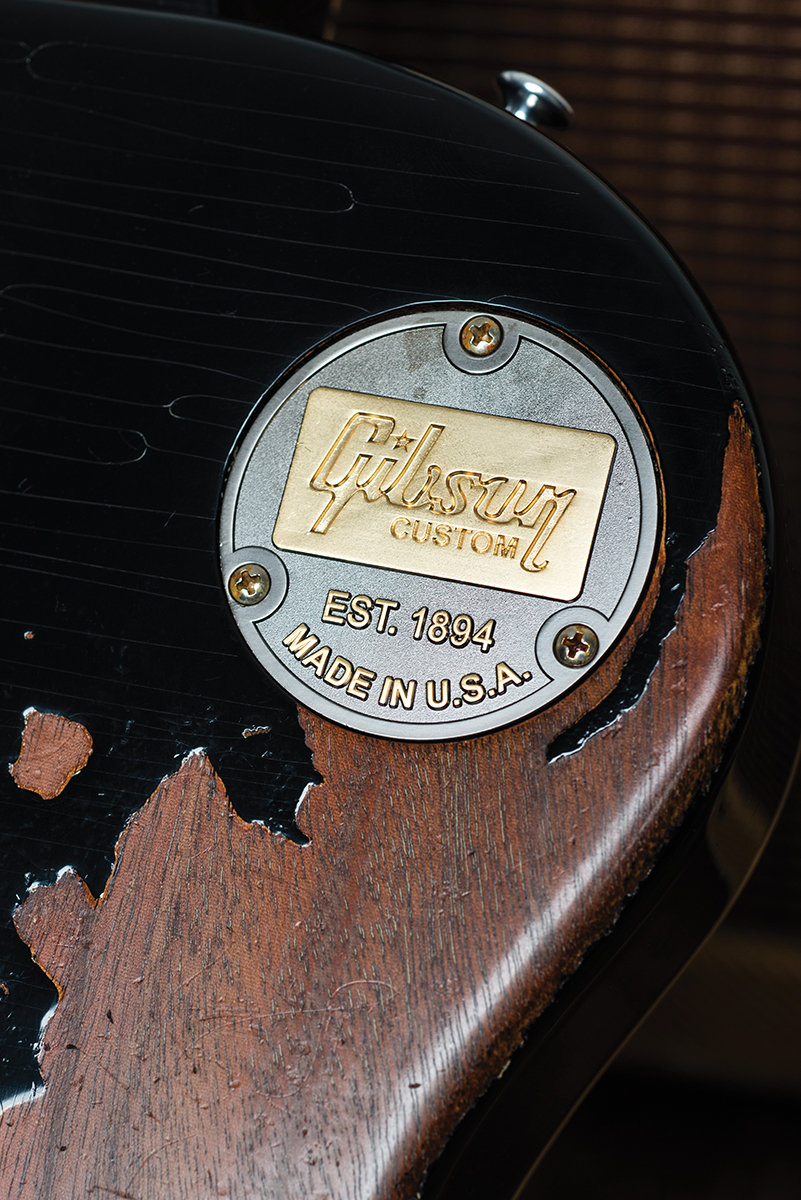 Gibson Custom does its relic’ing by hand using simple tools

Flipping up to the middle or neck settings on the three-way toggle switch introduces an extra helping of bass but we’re not talking mud here, there’s sugar and cream and it’s all very more-ish, particularly with lashings of spring reverb and judicious use of the Bigbsy arm.

Rolling back the onboard volume controls to clean things up introduces a hollower, funkier, more Fender-like tonality that works really well for soul-influenced playing.

In the middle setting, there’s a real sweet spot with the bridge pickup’s volume set wide open and the neck knocked back around a notch and a half. You can hear the extended bass of the neck pickup take a back seat rather abruptly as you turn down the volume and the resulting tone is a fantastic, chiming platform for well, almost anything.

It rewards the extra subtlety of fingers rather than a pick, too. 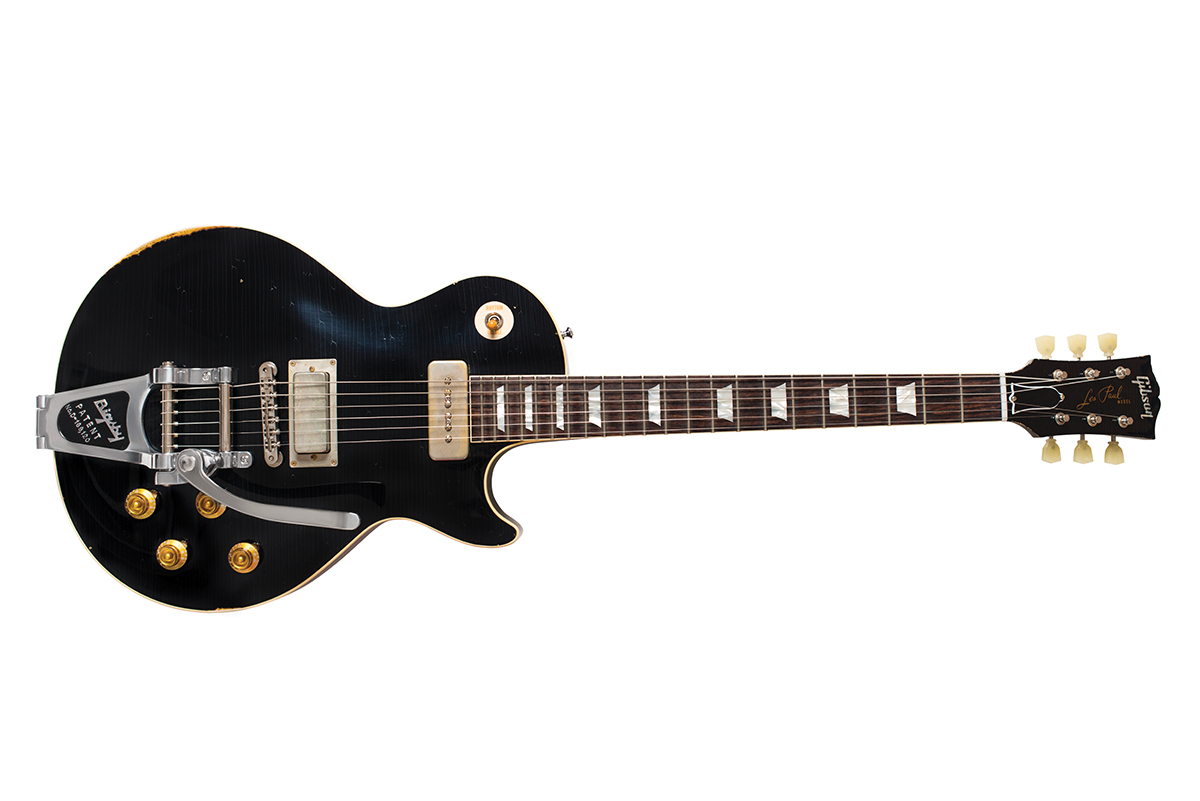 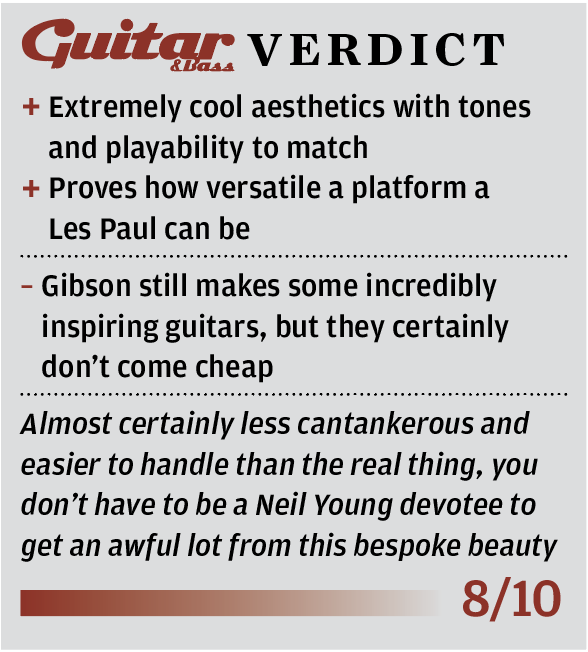