1958 was also the year of the sunburst Les Paul, the Flying V and the Explorer, but Gibson’s thinline archtop was arguably the greater achievement. 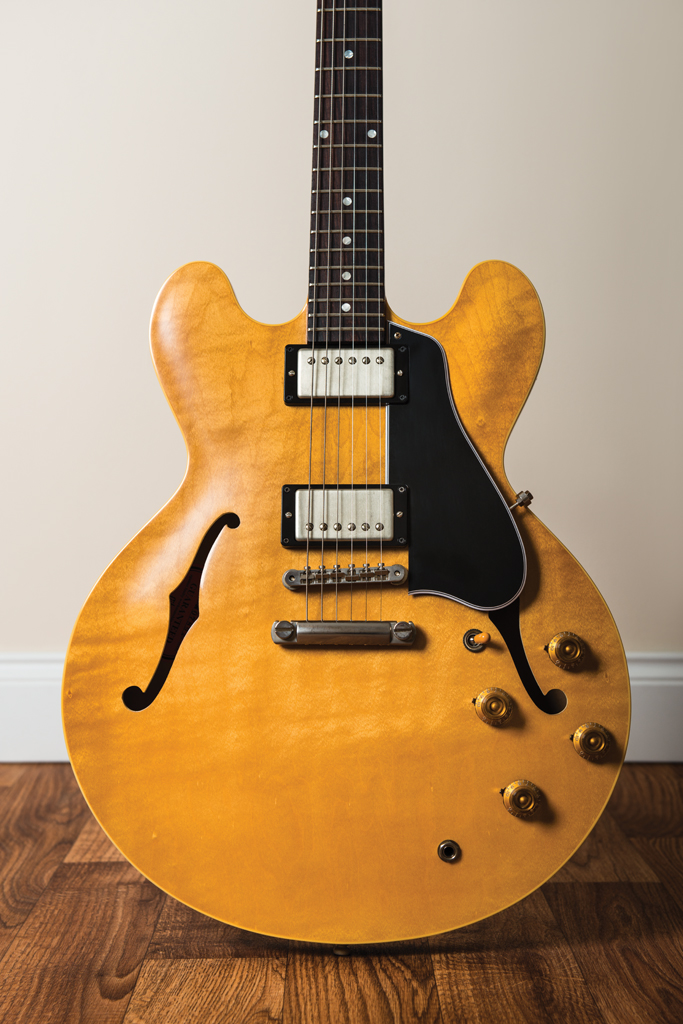 It’s hard to imagine now, but in 1958 the jury was still out on the new-fangled solidbody electric guitars of the age. The benefits of the Telecaster, Les Paul and Stratocaster were, of course, many but that didn’t stop plenty of players yearning for something physically closer to the jazzboxes with which they felt at home.

Applying the company’s archtop heritage to the new demand for electric guitars that were more controllable at higher volumes, Gibson’s then-president Ted McCarty “came up with the idea of putting a solid block of maple in an acoustic model. It would get some of the same tone as a regular solidbody, plus the instrument’s hollow wings would vibrate and we’d get a combination of an electric solidbody and a hollowbody.”

Of course, this principle wasn’t a million miles away from Les Paul’s Log prototype that Gibson rejected shortly before America entered World War II. Yet rather than starting with a solid centre-block and adding hollow wings to make the instrument look and feel more like a guitar, McCarty inserted the centre-block into a 16-inch thinline archtop. In addition to its feedback-reducing properties, this hybrid design would deliver an even balance, light overall weight and a comfortable seated playing experience, addressing the concerns of many late-50s Gibson customers, for whom the compact and heavy Les Paul Model was still something of a white elephant.

When it entered production in April 1958, the revolutionary ES-335 benefited from the technological advances that had recently been applied to the Les Paul, in the shape of PAF humbucking pickups, a tune-o-matic bridge and stop tailpiece. Most sources agree that 317 of Gibson’s new thinline semis left the factory that year – 267 in sunburst (ES-335TD) and 50 natural (ES-335TDN), marketed at $267.50 and $282.50 respectively. It’s the earliest of these models that the 2016 1958 ES-335 VOS is intended to replicate. 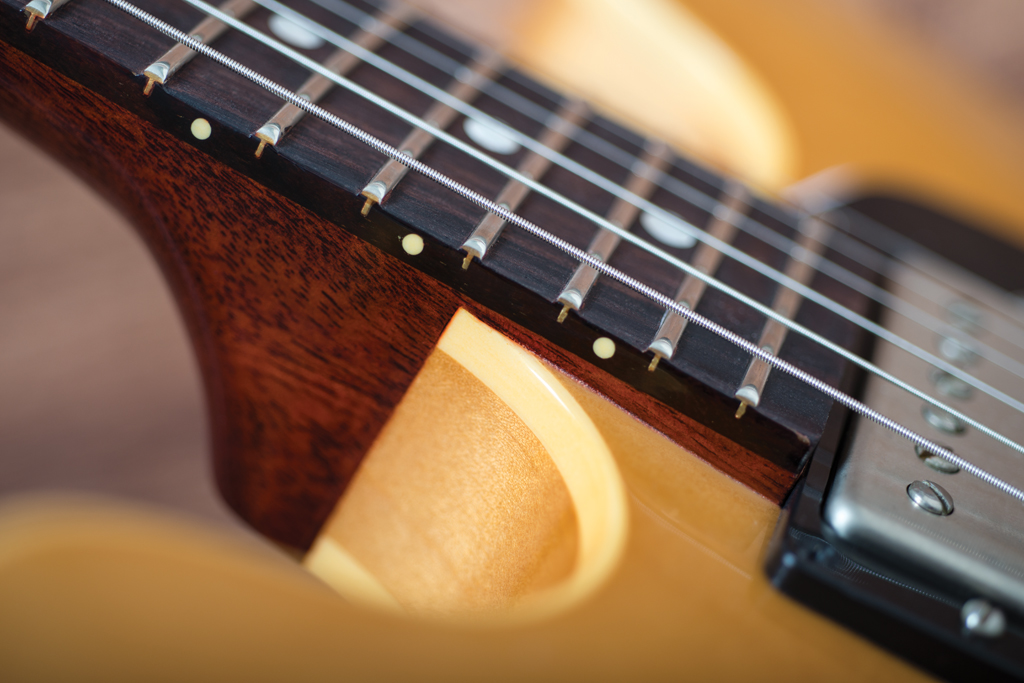 It’s not known exactly when Gibson switched over to bound fingerboards on the ES-335 but the evidence points to late 1958. Given the small numbers involved, this makes an original natural ’58 model with an unbound board as rare as a hen with a Hollywood smile astride a unicorn. Unobtainable they may be, but we’ve always loved the aesthetic combination of long ‘guard, natural finish and unbound board, so when Gibson Memphis announced this guitar as part of its 2016 line we greeted the news with the kind of mixed feelings all guitarists will recognise: about 50 per cent lustful swooning and 50 per cent, “Oh bloody hell, why did they have to go and do that to me?”

Doing our best to put emotion to one side, let’s first address what this isn’t, and that’s a True Historic-style attempt to manufacture an instrument that’s as close as is legal to the guitars that left the Kalamazoo factory back in ’58. Neither is it an attempt to create a painstaking replica that will fool your audience into thinking it’s a vintage piece; despite the manufacturer’s description referring to this as an “accurate rendition of the original dot neck”, the reality is more pragmatic.

For example, the shallow neck angle typical of 1958 ES-335s was such that Gibson was forced to use a low-profile ABR-1 in order to deliver a comfortable playing action. Sadly, the thinner bridges weren’t strong enough to cope with the tension of the larger string gauges of the time and were prone to failure. Common sense prevails in 2016, so there’s a regular neck angle of four degrees, a standard ABR-1 with no retaining wire and a marvelously slinky playing action as a result.

It’s not just the action that’s player-friendly; the `Traditional C’ neck shape offers a full inch of depth at the 12th fret but fills the palm wonderfully and never feels excessively chunky or fatiguing. Thanks to the absence of binding and the reddish-brown hue of the aniline dye powder that’s mixed in with the grain filler and applied to the neck, in terms of both look and feel you could easily be fooled by your left hand into thinking you are playing a Les Paul Junior. There’s something very rock ‘n’ roll about the stripped-down, student guitar feel and we can’t get enough of it. 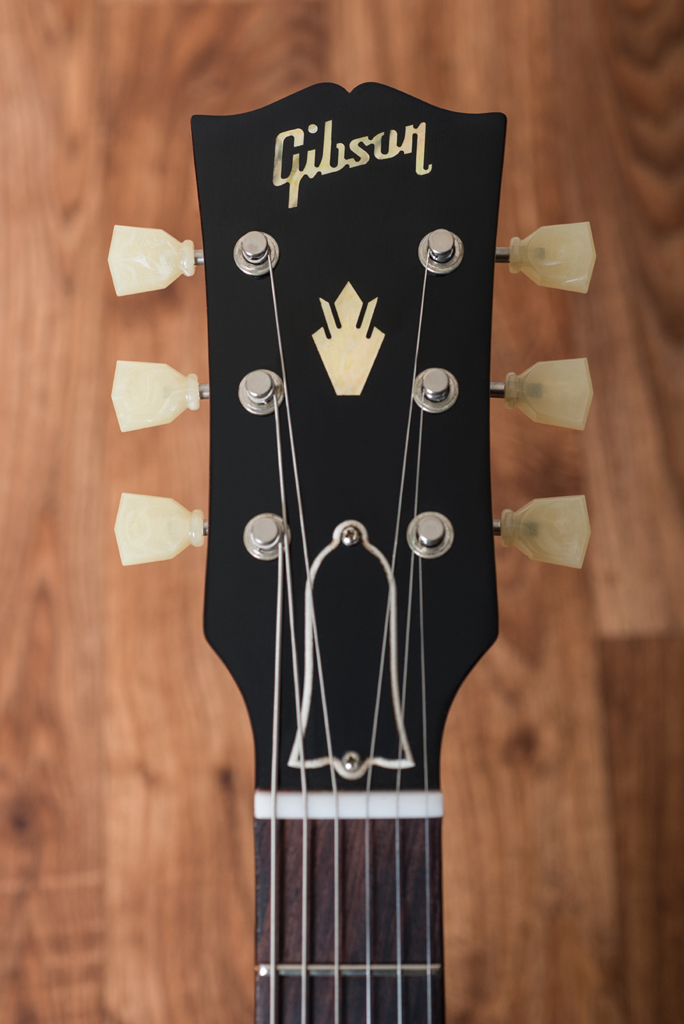 For your right hand, there’s a more familiar ride. Though Gibson built original ’58s using a thinner, three-ply maple laminate that was prone to splitting, and then moved to four-ply in ’59, today in Memphis the company uses a three-ply maple/poplar/maple configuration. Like the shape of the pickup covers, it’s a detail that might annoy one or two inhabitants of vintage guitar forums but back in the real world, we’re too busy playing the thing to worry about that.

And what a great player this guitar is. For our money, this is as close to physically perfect as the electric guitar experience gets – the light figure in the top layer of the body laminates shimmers deliciously as it moves under lights and, despite the chunky neck and light overall weight, strapped-on balance couldn’t be better. Knocking on for six decades after its inception, it’s easy to see why so many guitarists still consider the ES-335 to be the greatest electric guitar design of them all.

Time to plug in then, and the control here is provided by this writer’s own Nashville-made 2003 ES-335 with excellent-sounding vintage-voiced Mojo Pickups PAF replicas, paper-in-oil capacitors and 1950s-style wiring. Yet, sadly for our faithful old workhorse, just as the Memphis model’s acoustic projection and sustain far exceeds that of our own guitar, when we switch over to the Memphis model in an electric context it’s as if somebody has stepped on a full-range boost pedal.

Everything is bigger and more widescreen, the bass response is much improved and our tweed-style amplifier is pushed into overdrive much more quickly with the guitar’s volume controls wide open. Proof that the Memphis model’s `slightly underwound’ MHS (Memphis Historic Spec) pickups are no slouches when it comes to output and that `underwound’ doesn’t necessarily mean underpowered? You bet. 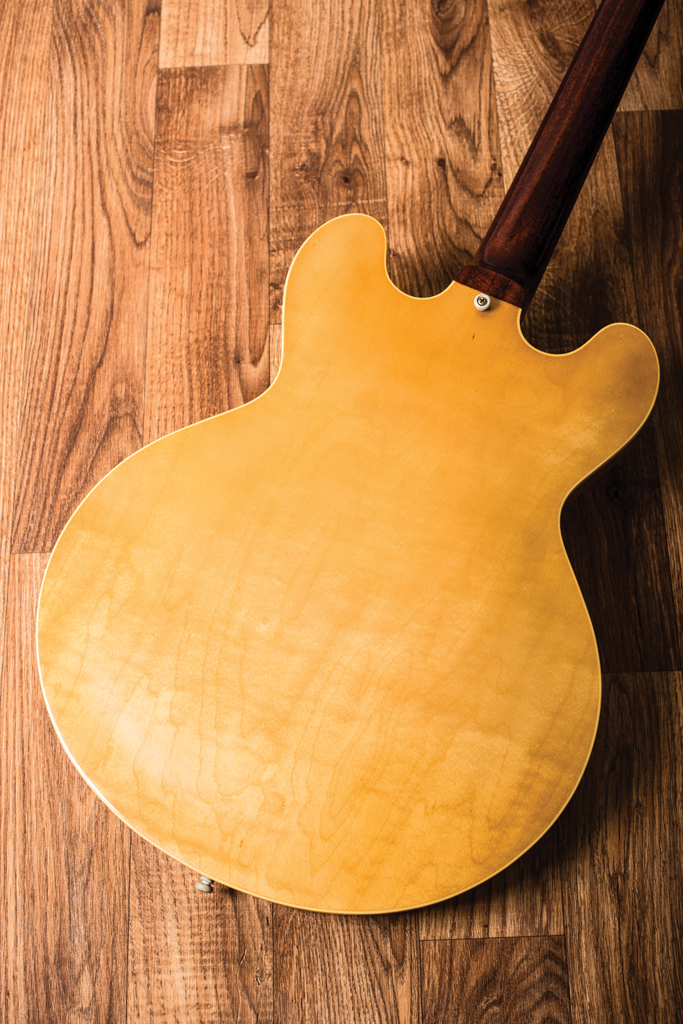 As has been noted in these pages before, there’s much more to the amplified voice of an electric guitar than the DC resistance of its pickups, and you should never think of the figure in kilo-ohms as simply an `output power’ rating. Listening hard in a clean context with the volume levels equalised, the handwound Mojo ‘buckers in our own instrument seem to deliver a little more harmonic complexity, but the MHS pickups – also unpotted with unbalanced coils – in combination with the more resonant Memphis guitar add up to a better overall sound with greater depth of tone in the bass and an airy, chiming high end.

It’s not an issue with a cranked tweed amp alone, but when you start bringing stacked overdrive and boost pedals into play at volume, the MHS pickups are more susceptible to microphonic squeal than our Mojo units; you may find this problematic if you play loud rock on small stages. That said, if you can get a bit of separation between yourself and the amplifier then there are some tasty heavy drive tones to be had too. 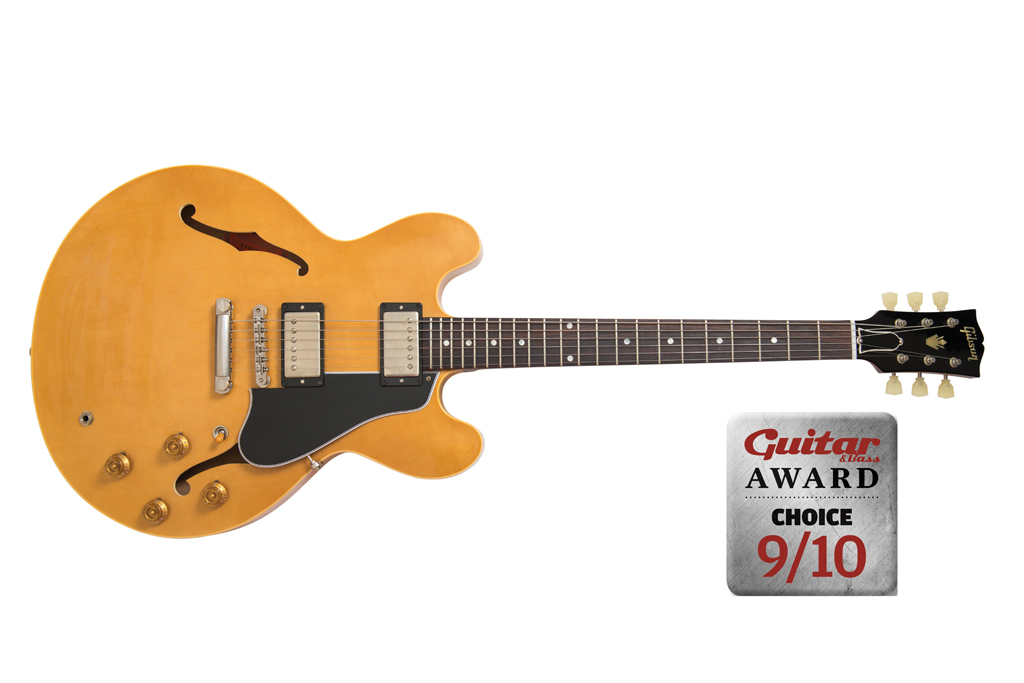 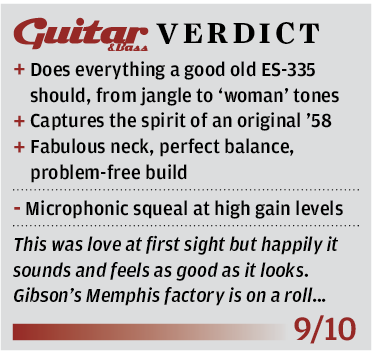