A limited run of the Canadian company’s thinline semi that boasts a tweaked spec, super-cool looks and something of a revelation inside. Simon Bradley goes through the f-hole… 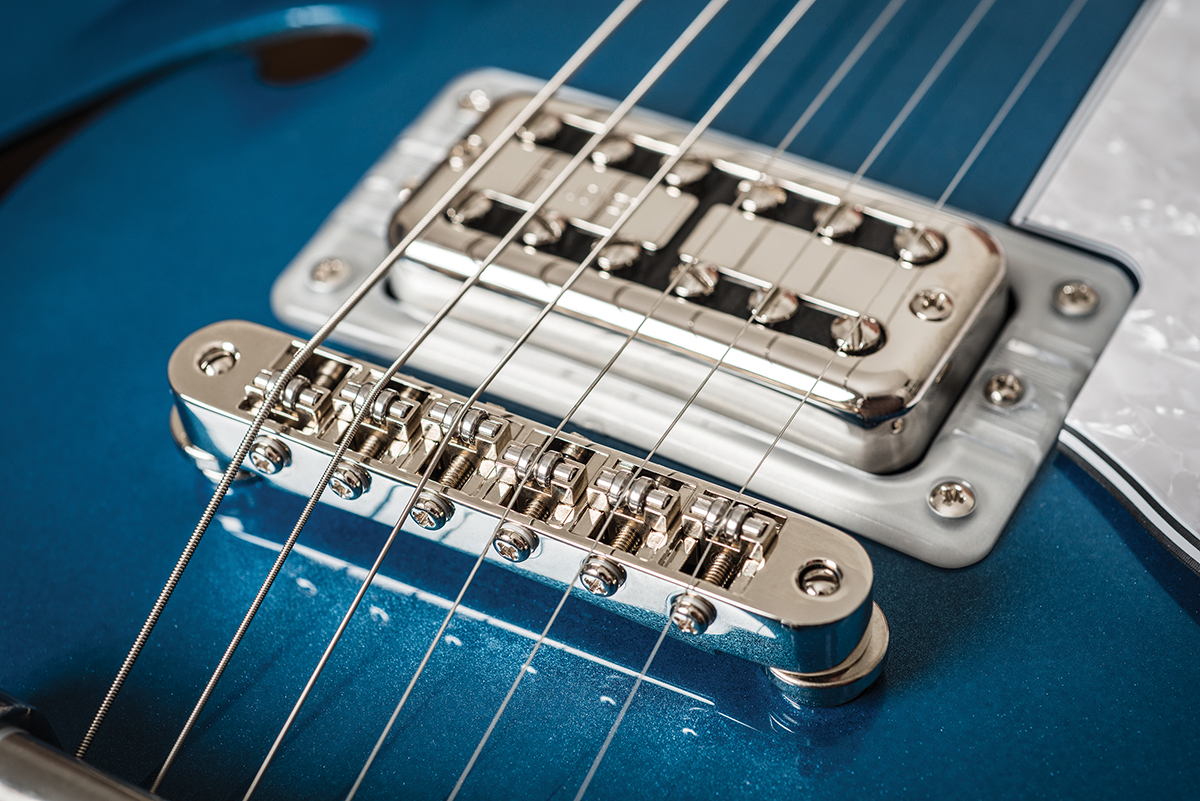 Godin periodically offers limited-run versions of selected electrics across its ranges, which often equates to a pertinent change of spec and a number of non-standard finishes.

The Montreal Premiere is the Canadian company’s slant on a thinline semi-acoustic that’s constructed along mostly traditional lines, and part of the ‘limited’ classification of this example is that the Godin pickups loaded into the remainder of the range are replaced by TV Jones Classics. In addition, the whole shebang has been given a striking Desert Blue finish.

Initially at least, the whole package brings Gretsch to mind, but as it turns out, the Montreal Premiere actually sits somewhere between a single-cut Jet (were it fully semi-hollow as opposed to chambered) and a Gibson ES-335 or 339 (were they single-cuts). The most notable feature resides within the cherry laminate body, where you’ll find a centre block of Adirondack spruce, which has been dubbed a ‘breathe-through’ core. 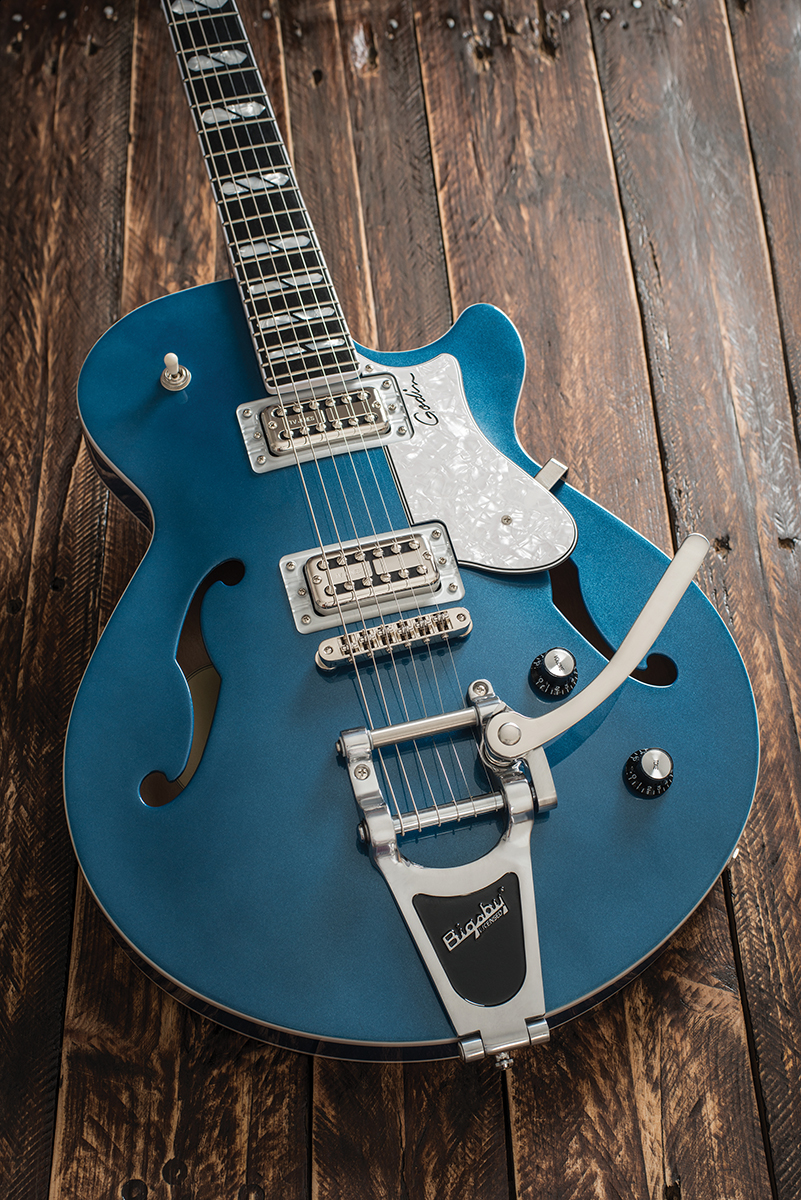 There are three ‘arches’ that are carved through the core’s lower half with the idea being to give the best of a centre block – increased sustain and stability alongside reduced feedback – with the established tonal benefits of a fully hollow-bodied guitar. The carving is undertaken by hand and, although the guitar’s weight is unavoidably increased by the spruce inside, we feel this is a inventive concept somewhere between trestle bracing and a traditional centre-block.

Godin has long been at the forefront of sustainability and the utilisation of eco-friendly practices, and this is continued by the use of Richlite as the fretboard material. A resilient substance composed of recycled paper infused with phenolic resin, Richlite is seeing increased use in the guitar manufacturing world as a viable replacement to both ebony and rosewood – not least by the likes of Martin and Gibson. It doesn’t splinter or shrink or possess a grain of any kind, and the series of split hexagonal mother-of-pearl inlays only increases the guitar’s blingtastic look. 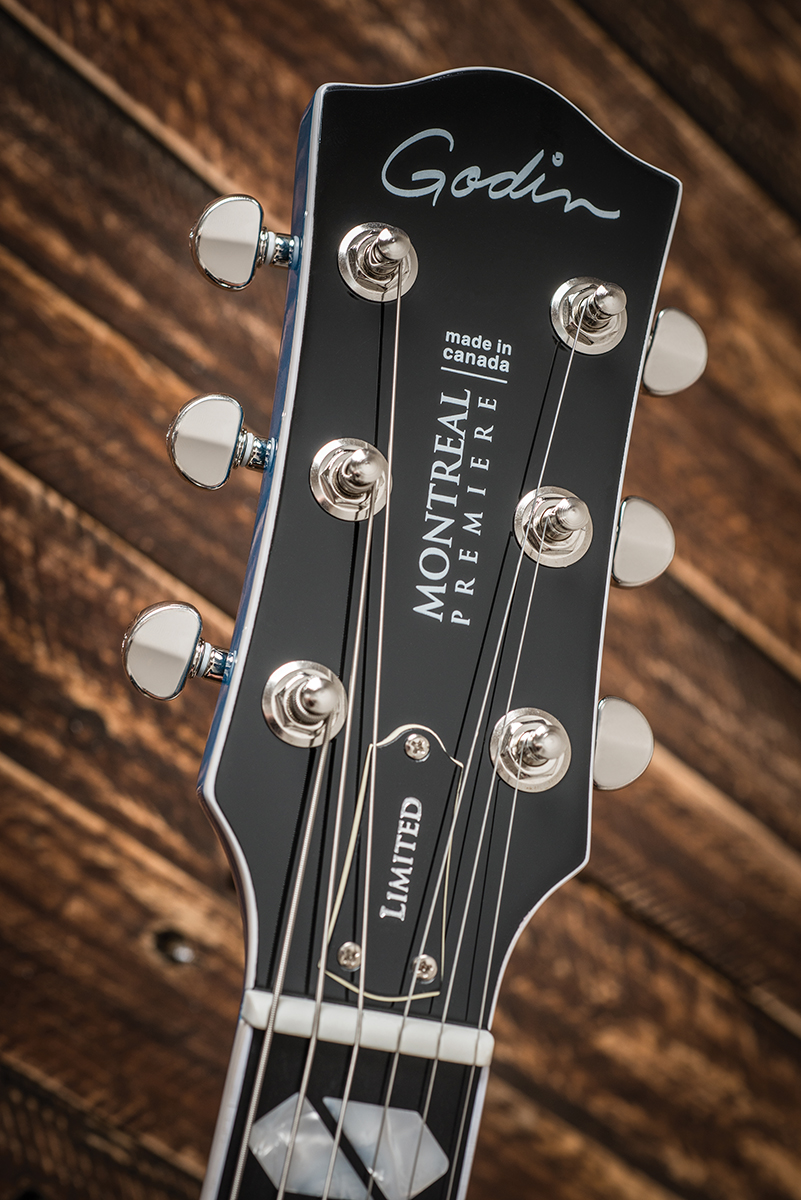 What’s more, Gibson has stated that Richlite is actually a more expensive material to work with than ebony, which did surprise us, and we’ll get to how it feels and sounds in due course. Kudos to Godin for also taking the plunge, and the fact that it’s good enough for use on the sumptuous Gibson ES-355 VOS, let alone the iconic Les Paul Custom, will hopefully assuage any lingering doubts regarding its suitability.

Elsewhere, Godin has opted for a Bigsby Licensed B-70 vibrato, a die-cast version of the B-7. Its design incorporates a tension bar under which the strings are fed that increases downward pressure over the bridge that, here, is thoughtfully equipped with roller saddles. The bar is stiffer to depress than the B3 we have fitted to our Gretsch Nashville, but it’s certainly not difficult to become comfortable with and the array as a whole is, of course, intimately connected to the aforementioned spruce core for a purer tone. 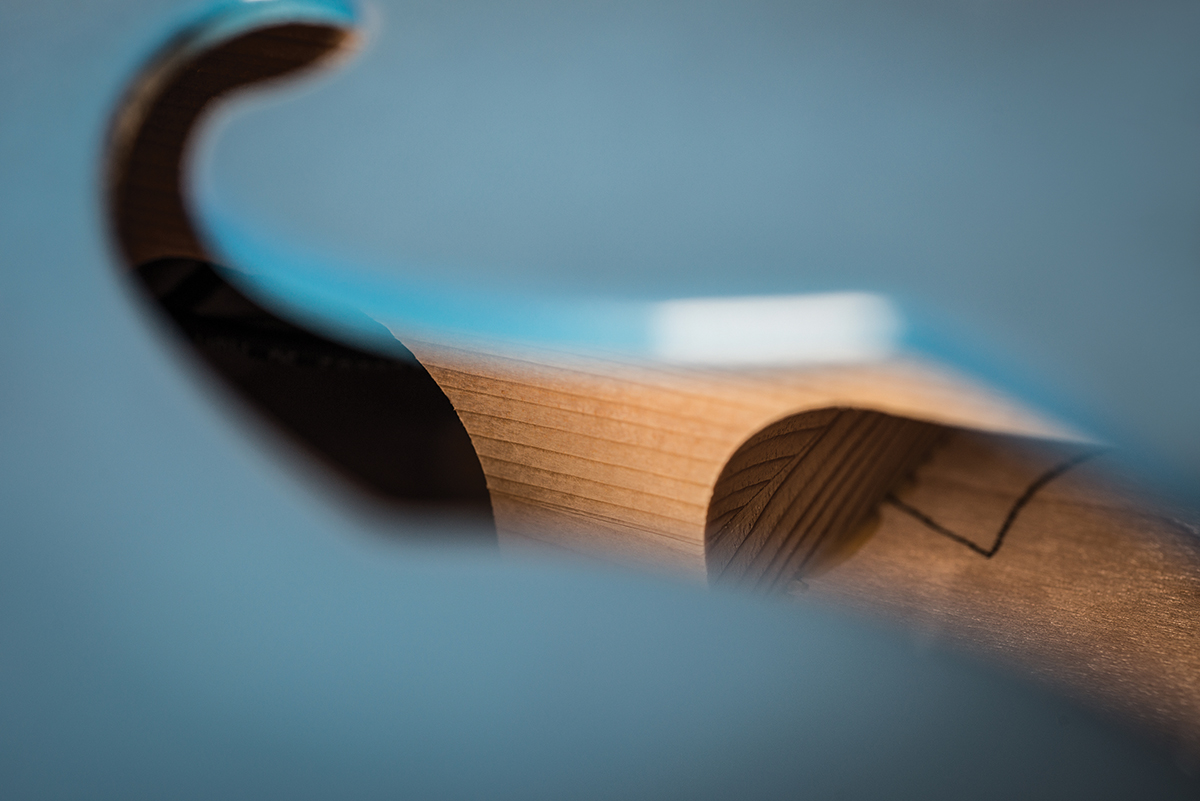 Although the more traditional Gretsch fan may rue the lack of myriad controls and switches, those of a more practical ilk will, like us, be perfectly happy with the single volume and tone pots and straightforward three-way toggle.

There’s a little finish build-up around the heel and neck join, but we can live with that, as the finishing both here and on the maple neck is perfectly smooth. What’s more, as is usually the case with Godin Guitars, we’re impressed by the standard of the overall construction.

Strapped on, the guitar is moderately weighty but not excessively so, and is nicely balanced. We have to be honest; we didn’t even notice the fingerboard until we were well into our sound tests, and we have absolutely no issues with it. It’s been well fitted and is mirror smooth, especially when compared to the lower grade of ebony we have on one of our control guitars.

What influence it has on the tone will most likely be to add a certain tightness to the high-end but we’re not convinced anyone would pass a blindfold test between Richlite and ebony. The neck’s soft D profile is a joy to grasp along its entire length, which, again, is all we could ask for. 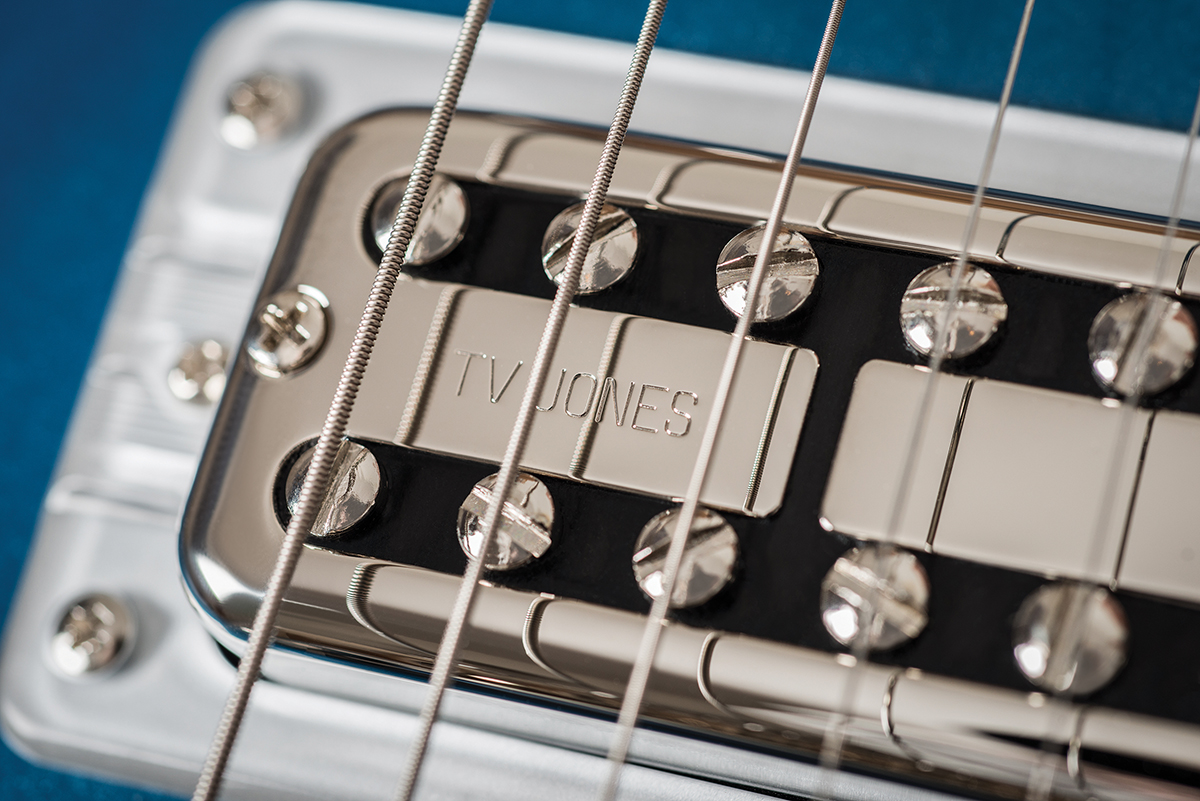 The bridge TV Jones is hotter and therefore gnarlier than its unashamedly more vintage partner and, with an amp set just to break up, the difference in the pair’s unadulterated tones is marked. There’s a distinct lack of Gretschy honk from the bridge pickup, with the bass strings offering sufficient lower-end to counteract the nicely snarky and sustaining treble.

That said, the fact that it doesn’t really sound like a Gretsch isn’t an issue for us – it sits somewhere between that and the middly warmth of an ES-335 and we could certainly see the Montreal sounding at home with rockabilly, blues and even indie styles.

The guitar really comes into its own with the neck pickup. Based on a 1959 Filter’Tron it’s full and warm, as expected, but there’s also an expressiveness to the treble that ensures even complex jazz chords never sound cluttered or indistinct. Flicking to the central position brings the treble strings further to the fore without excessively brightening proceedings and we’d suggest that this setting would give already mellow jazz solos just the right amount of edge. 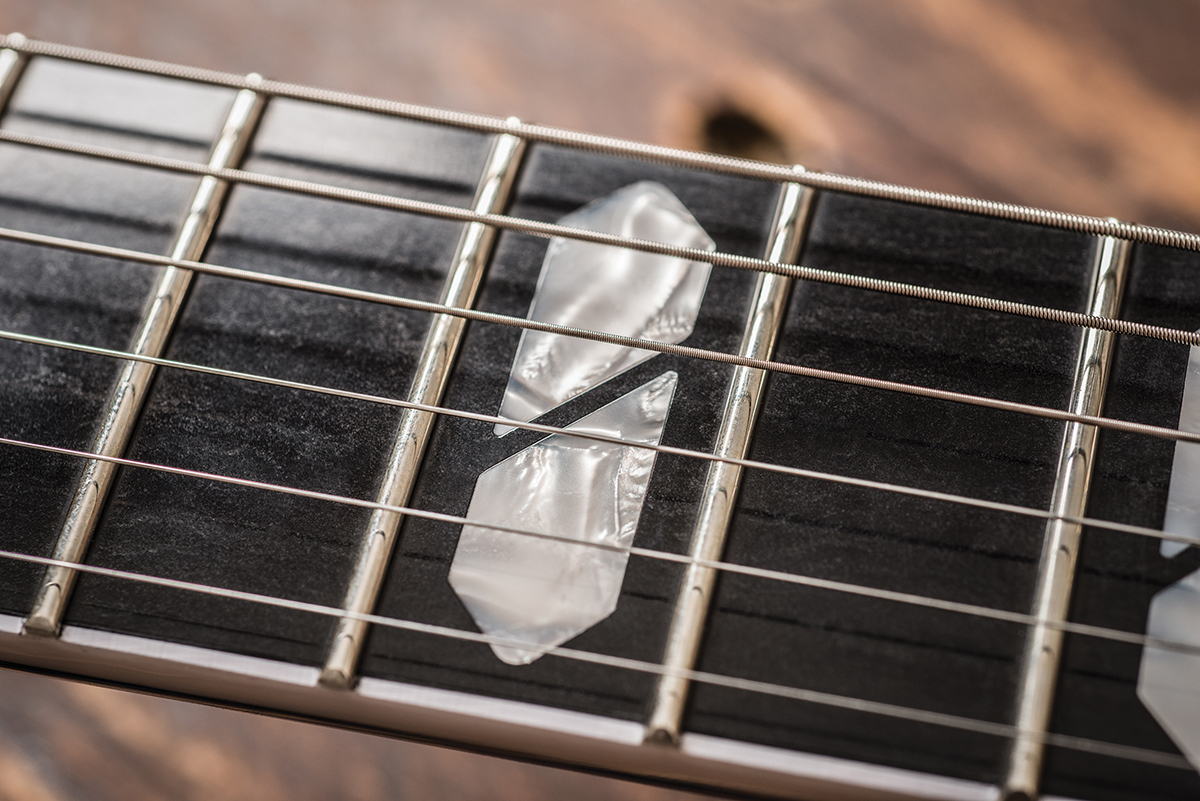 The Bigsby can return a couple of cents flat after being depressed to its full extent, but that’s a familiar quirk experienced players will be adept at dealing with; getting into the habit of quickly pulling the bar up past centre to disperse friction is par for the course. Remember that there is also a version of the Montreal LTD that comes loaded with a standard tune-o-matic/stoptail array.

We feel that owners of either a 6120 or ES-335 would get plenty from the Montreal Premiere as it offers tones that are mostly of its own devising. The overall quality of the construction and performance more than justifies the price tag and, if you’re in the market for a semi that has tones to match its stunning looks, not to mention an irrefutable feel of exclusivity, this might just be it. 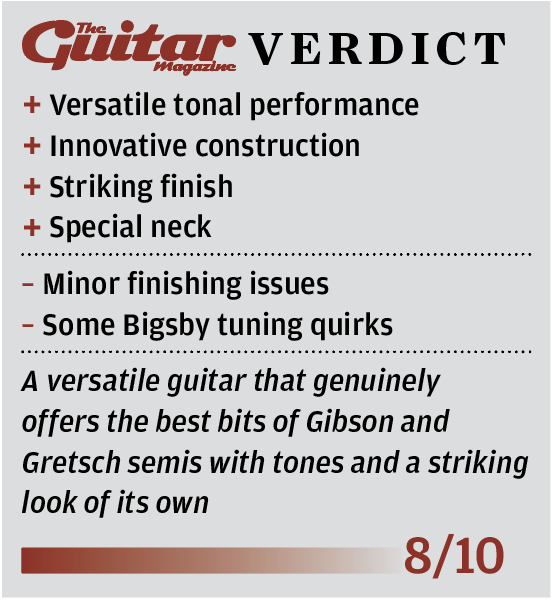