A limited edition of a workhorse, with new finishes, upgraded pickups and a clever vibrato system. Simon Bradley investigates. 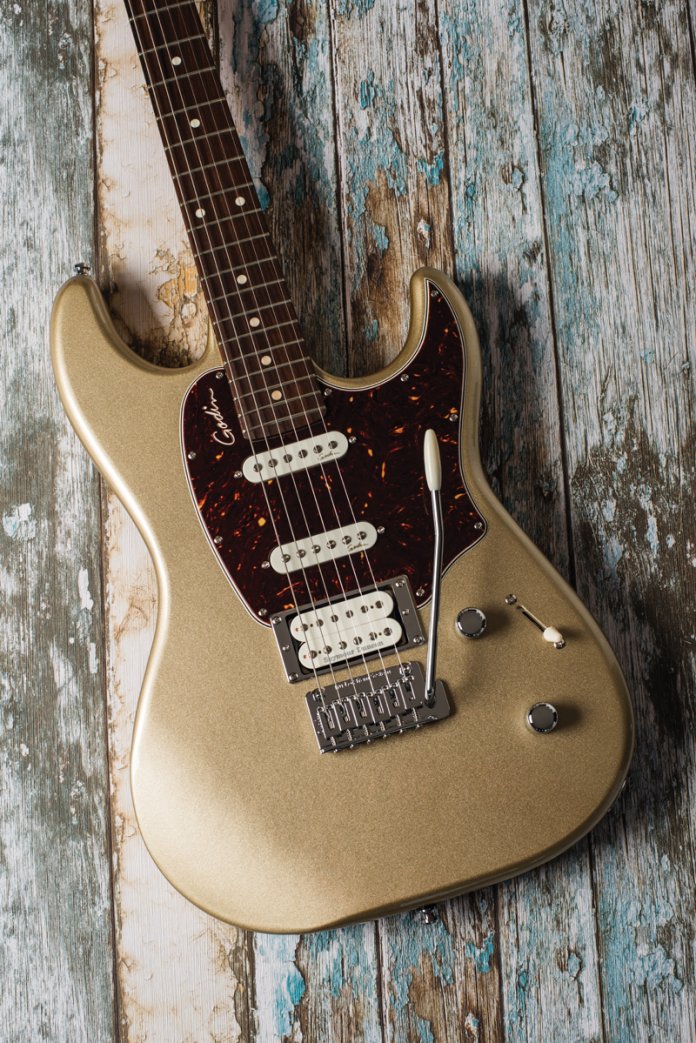 Canadian company Godin has always produced a wide and versatile choice of instruments, and whether your head is turned by models bursting with all manner of modern technology, such as the Multiac or LGX ranges, or you prefer guitars that are more down to earth, we’d suggest that any player would find something interesting in the catalogue.

The regular Session models, with high-quality tonewoods, a diverse choice of finishes and an excellent overall performance, are more than worthy of attention, and it’s difficult to see how they could be improved on. There’s no such lack of ambition from Godin, however, and three new Session LTD models were introduced at NAMM this year – upgraded versions that have been produced in limited numbers.

There’s always something undeniably woody about Godin guitars, and the Session LTD is no exception. You can almost smell the aroma of the woodshop exuding from the hand-finished Rock maple neck, and the flawless satin feel makes it exceedingly playable.

The shaping of the fingerboard edge results in a shallow D profile, and the neck as a whole puts on a little more meat as the 12th fret approaches. Even casual acquaintances with the company should be aware of the quality of Godin necks, and this is yet another beauty. 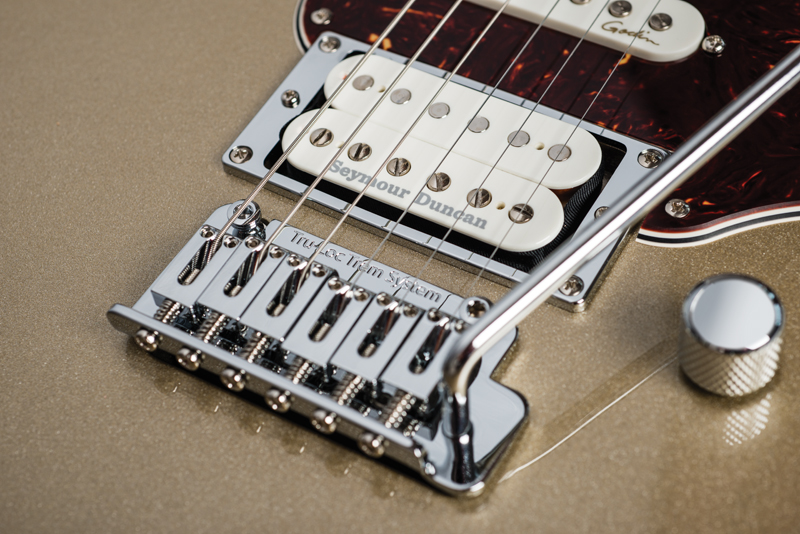 It’s secured to the body with a four-screw plate that’s shaped to mirror the heel’s ergonomic contouring. It’s worth noting that models finished in Desert Blue and Desert Red are supplied with not only a maple fingerboard but also a pearloid scratchplate, should the livery of this example not appeal.

Many manufacturers have taken the plunge and now produce their own pickups; the likes of ESP/LTD, Jackson and Ibanez load a selection of their low- and mid-priced instruments with home-branded coils as a matter of course. Godin, too, takes this approach, and the regular Session features an HSS configuration of Godin pickups that includes the same pair of GS-1 single coils as loaded here.

Replacing the covered Godin humbucker in the bridge is a double-white Seymour Duncan SH-11 Custom Custom, an Alnico II-based pickup that’s best described as a PAF on steroids with an accentuated high range. Controls comprise volume and tone pots, with the latter doubling as a push/pull coil split for the humbucker.

The bridge pivots on two points and is made up of six hefty Fender-style and fully adjustable saddles. It’s set to allow a modicum of upward movement ± almost a full tone on the open G string ± and is beautifully smooth in its operation. It also includes Godin’s Tru-Loc system, a method of securing the screw-in vibrato arm in just the right place. Set the arm to your preferred position, use a 3mm allen key to lock it in position via an aperture in the 13.5mm trem block and you’re done. It’s not immovable when secured, but does stay put where you leave it. 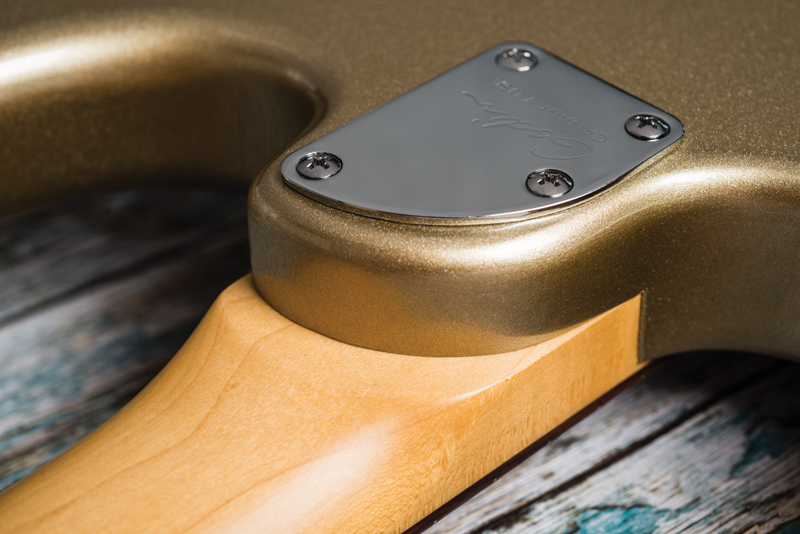 The body, a slightly squarer take on the classic Strat shape, is constructed from Canadian Laurentian basswood. Traditionally, at least, basswood is lightweight and airy, yet the Session is reassuringly weighty; the guitar as a whole weighs in at 8lbs.

To our eyes, the sparkly Silver Gold finish of this example is similar to Fender’s Shoreline Gold option and, aside from a disappointingly blobby area surrounding the control cavity, has been applied satisfactorily. It’s topped with a three-ply tortoiseshell scratchplate that has been engraved with the Godin logo, and there’s little doubt that the guitar is quite a looker.

With a clean tone, the humbucker coil split – which solos the screw headed coil – provides an unusually nasal tone that’s great for more aggressive  country styles, and adding in the central pickup via position two adds body without compromising the trebly cut. It has that lovely `in between’ character that complements the high end to give versatile and balanced tone.

Positions three, four and five add incrementally more levels of depth, as expected, and we found the neck pickup’s woody character was aided by removing some of the edge with the tone pot. That said, the twang that’s inherent across all pickup selections is certainly engaging, and ensures your tone is never indistinct. 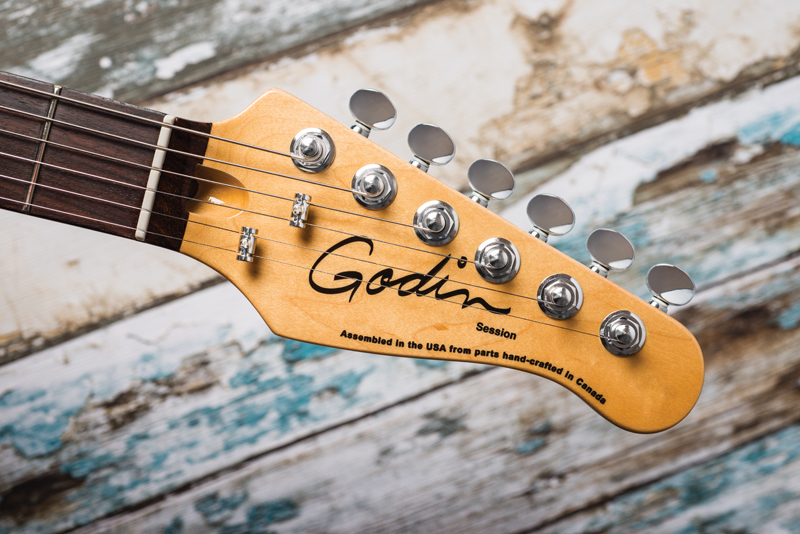 With more gain, the tone fills out and tightens up, with the full humbucker providing a striving rock rhythm tone that can really sear for solo work, especially if you kick in a drive pedal. The single coils sound great, too, with the split ‘bucker coming across all spiky and full of attitude like a beefed-up Tele; while position two, probably our overall favourite, would be a great go-to tone for up-tempo blues styles.

There are arguably more suitable guitars on which to play hard rock and metal, but it’s to the Session’s credit that it’s more than capable of flicking the horns. The humbucker’s treble, coupled with the edge of a high-gain amp, gives a perfectly acceptable tone for these styles and, unlike some ceramic-based pickups, cleans up nicely on the volume pot without losing too much character.

At super-dirty levels of high gain, it positively screams, and if your covers band is called upon to trot out Du Hast to satisfy the bride’s mother, you’ll be more than happy with the sheer aggression of the harmonics that jump out. The treble might be too much for some, but we loved it. 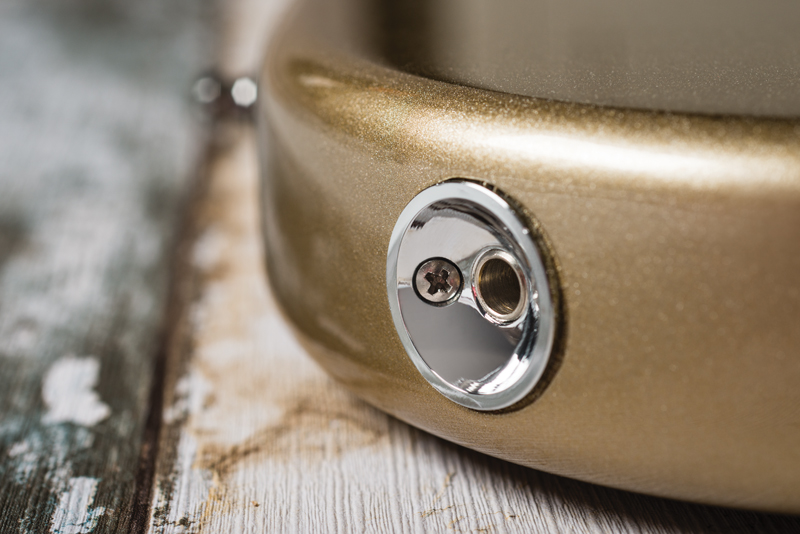 The term `workhorse’ can be perceived as disparaging, but if a single guitar can ably cover a number of musical bases, what’s not to like? No guitar can authentically manage all tonal styles, but the Session LTD comes pretty close. It doesn’t do jazz, nor is it ideal for music that needs a warm, soupy guitar.

However, from blues and country, through pop and punk, and on to classic rock and beyond, it’s impressive. It’s a pro instrument that looks great, plays wonderfully and is fairly priced. There are plenty of options, too, so don’t dismiss it down simply to the name on the headstock; you need to give it a whirl. 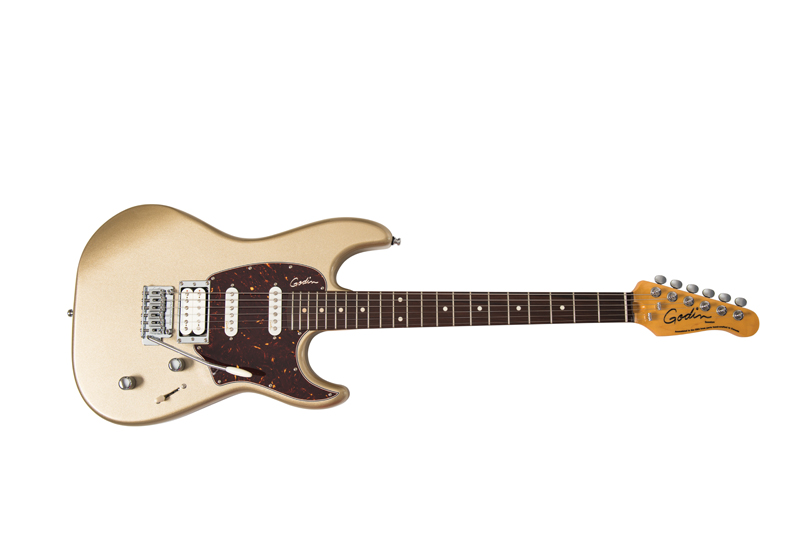 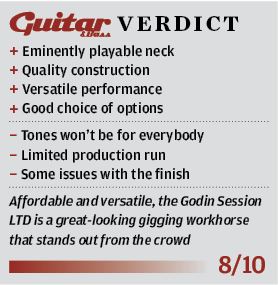