We’ve often raved about Gretsch Electromatics and been consistently wowed by sheer quality of the Players Edition Anniversary, so what happens when they go head to head? 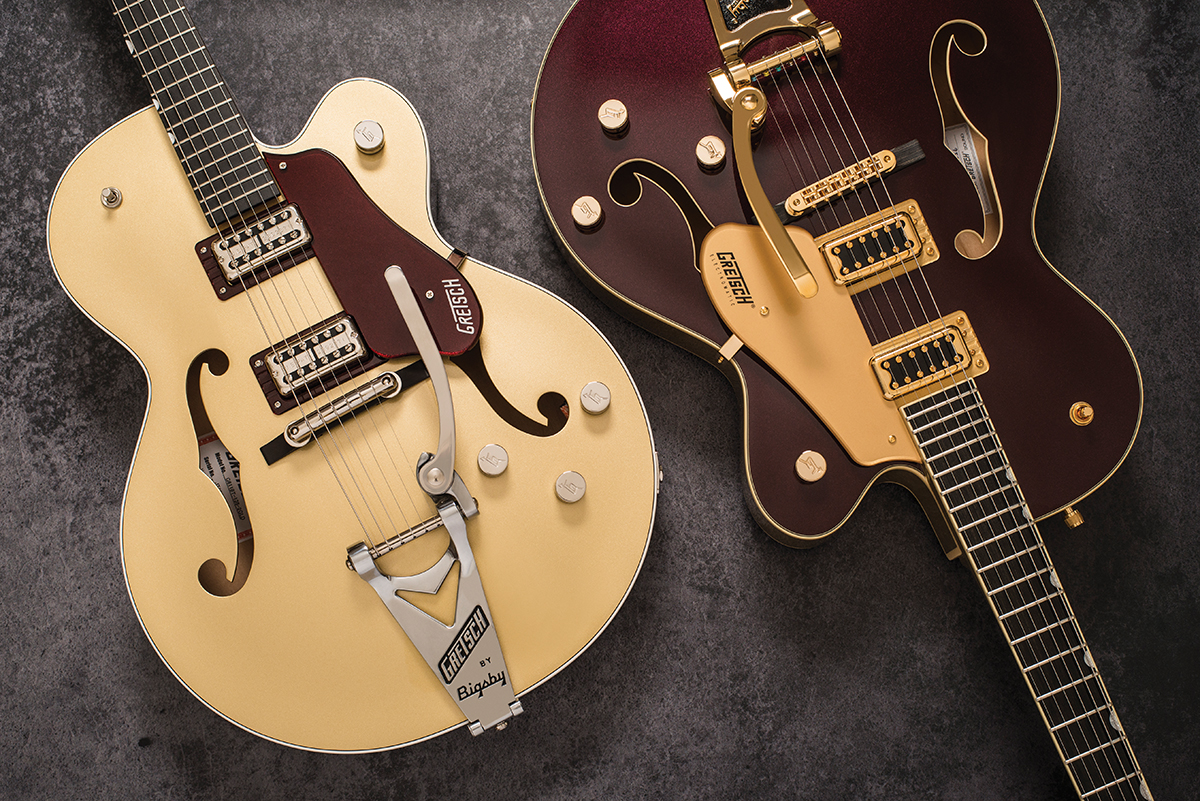 We had the pleasure of getting to grips with one of Gretsch’s Japan-made G6118 Anniversary guitars back in April of last year, and to celebrate the company’s 135th anniversary, the brand has decided to deck that same guitar out in a lovely gold/cherry combo. However, there’s, no point in us reviewing the same model twice, so it’s very handy that Gretsch has also revealed 135th Anniversary limited edition Electromatic version. What better opportunity for us to assess just what that extra £1,300 or so is going to get you if you’re in the market for a big-bodied Gretsch?

On the surface, the Korean-made G5420 is, like the G6118T, a Bigsby-loaded single-cut with ‘neoclassical’ thumbnail markers and an identical control layout featuring a master volume at the cutaway combined with individual volume controls and a master tone. Beyond this, however, the guitars are quite different – which is signified by a sizeable difference in price. 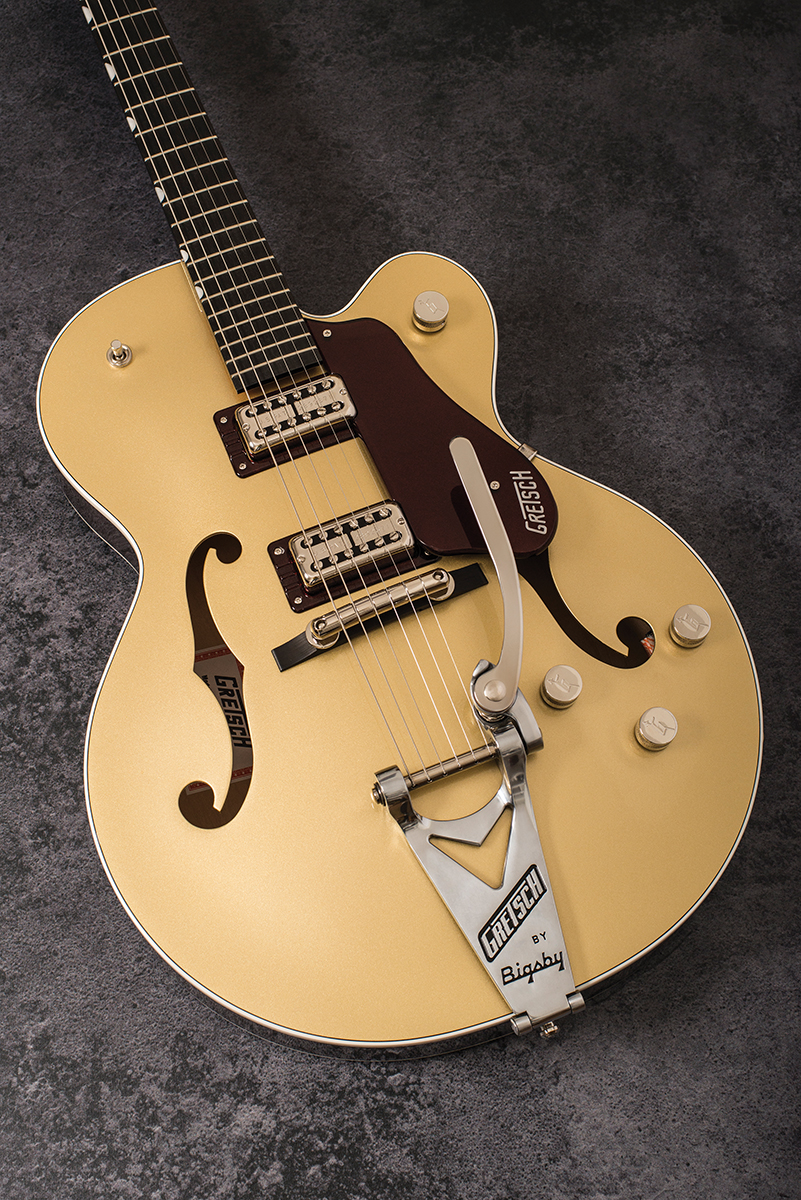 Although ostensibly a mid-priced guitar, the G5420TG has various features that are more commonly associated with high-end Gretsches. We’re talking f-holes, headstock and fingerboard binding, and a pinned compressed ebony bridge.

As for finish flatness and colour there’s not much between them, but the 5420 has some untidiness around the heel and along the neck extension. It might have benefitted from a few more minutes with a sanding block, but it’s far from obvious. It’s clear that more prep time has gone into the G6118, and an absence of build up around the heel and neck join indicates that poly finishes are sprayed a bit thinner at the Japanese factory. 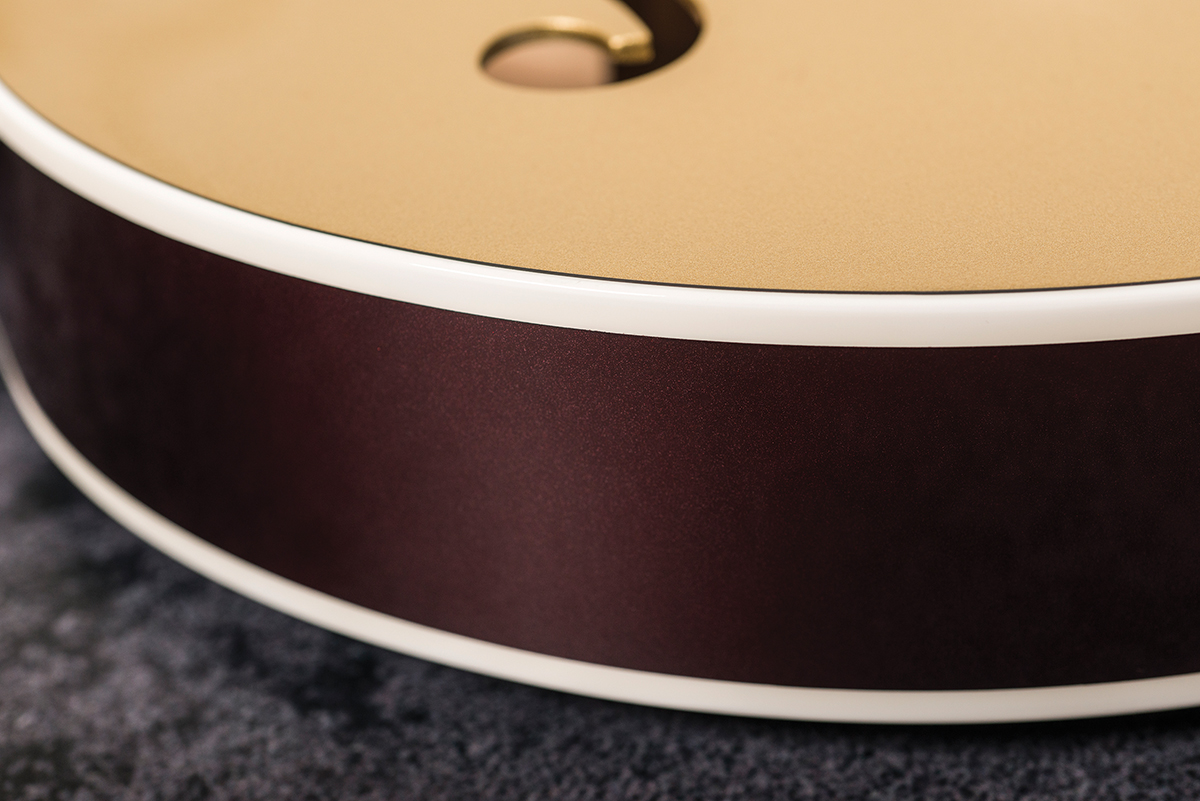 The binding colour is different because the Korean factory has sprayed tinted clear coats. It certainly gives the guitar a softer appearance, but it’s a matter of taste if you prefer the cleaner white binding lines around the G6118’s body. Also note that the Japanese factory uses a vintage correct white outer layer with a thinner back layer of binding on the inside. In contrast the Korean factory does white, black, white.

All the G5420’s hardware is gold-plated, with open-geared tuners, a licensed Bigsby and an Adjust-O-Matic bridge. The ‘G’ arrow knobs and strap lock buttons provide yet more vintage references.

The headstock has the 1960s shape with a modernised take on the Gretsch logo. The peghead is also sprayed to match the front of the body and the wider frets are properly dressed in a compressed ebony fingerboard that’s sprayed and polished to a high gloss. 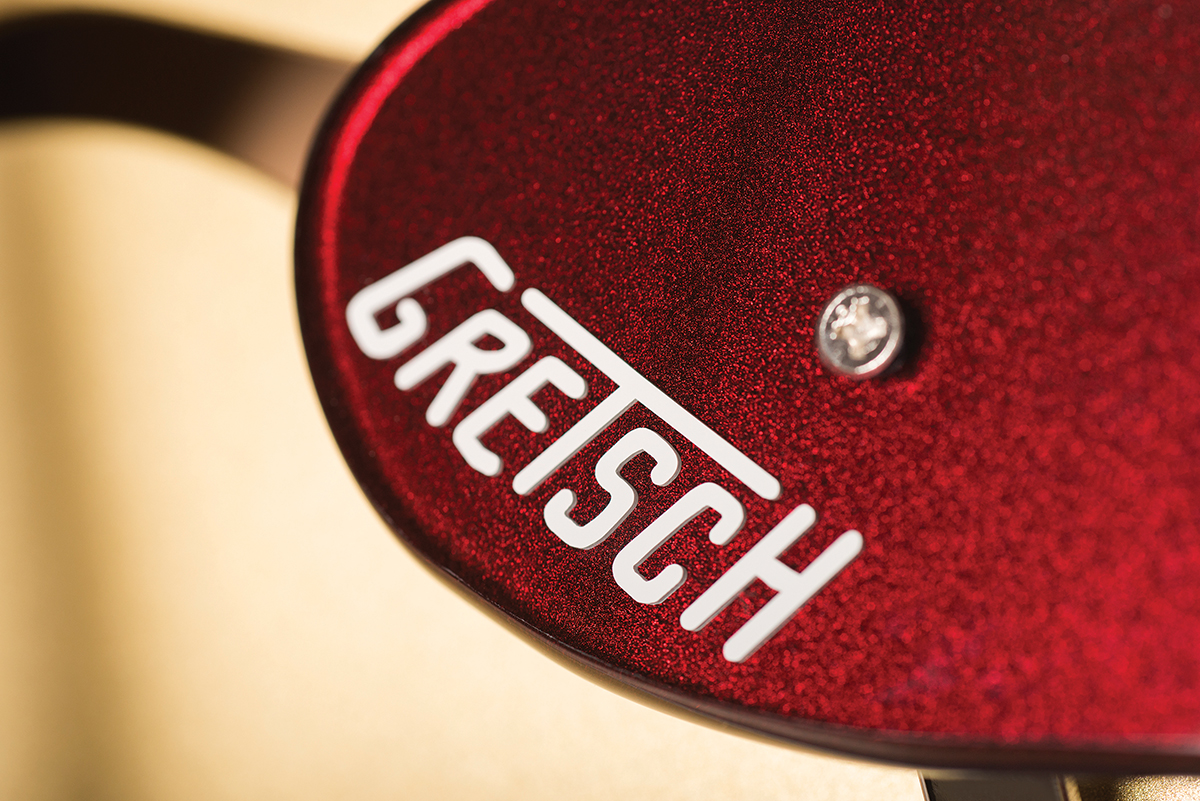 The body is made from five-ply maple rather than the vintage spec three-ply used in Japan. Reaching through the f-holes and pinching the top between our fingers, the G5420’s extra thickness is quite apparent. Looking through the F-hole, it can also be seen that the G5420 has a single soundpost joining the top to the back in the area immediately below the bridge.

Lastly, the Korean guitar gets Gretsch’s Black Top Filter’Trons with open covers. Note the two screws on the bass side of the pickup rings, which allow you to set pickup angle as well as height. 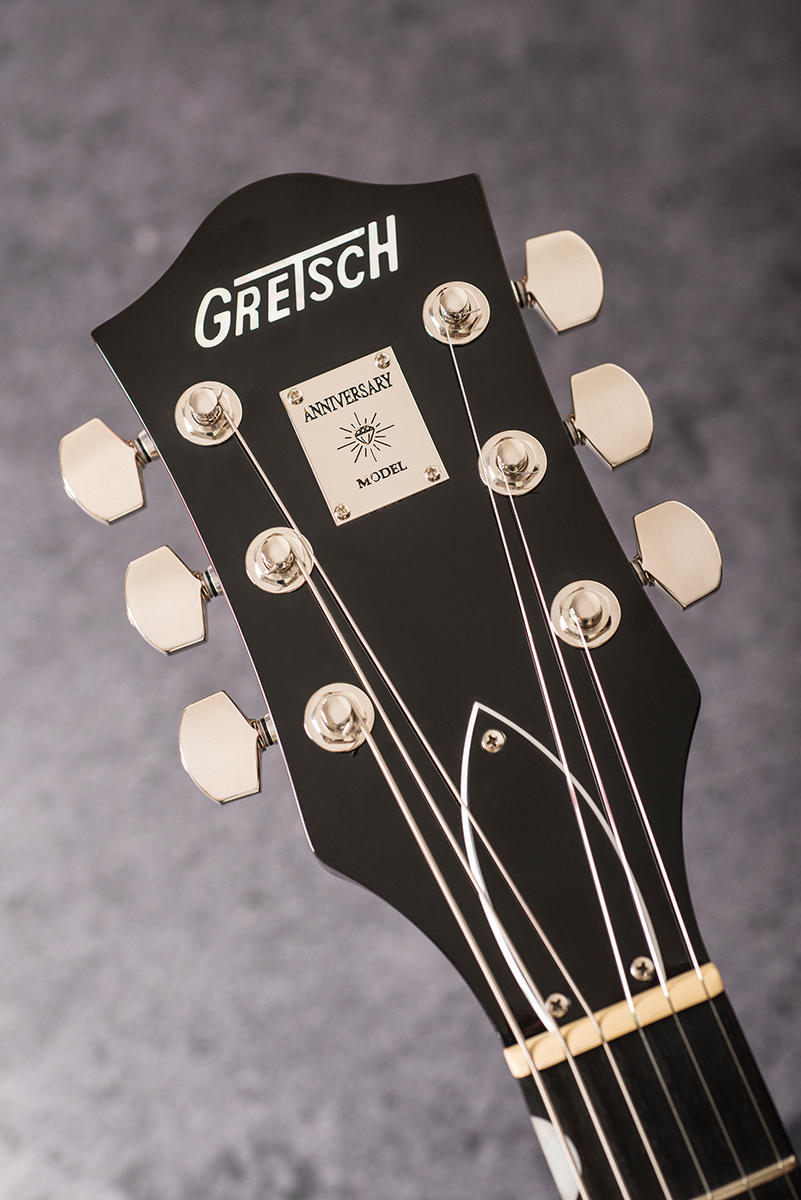 The Japan-made model sports the classic Anniversary logo plate, while the Electromatic has a plain headstock

The main points of difference have been mentioned above but the most interesting contrast is the way the G6118 balances modern features with vintage authenticity. The 50s-spec body and trestle bracing coexist with locking tuners, a streamlined control layout and contemporary locking strap buttons.

There are slight structural differences, too – with the neck extension rising clear of the body at the 17th fret rather than the 20th on the Korean model. The neck profiles are similar, but the slightly slimmer and softer shouldered Japanese neck has a sophistication and vintage authenticity that we prefer. What’s more, the High Sensitive Filter’Trons look like the real deal, and the elegant plexi pickguard surpasses the Korean version’s crude bevel and clunky shape. 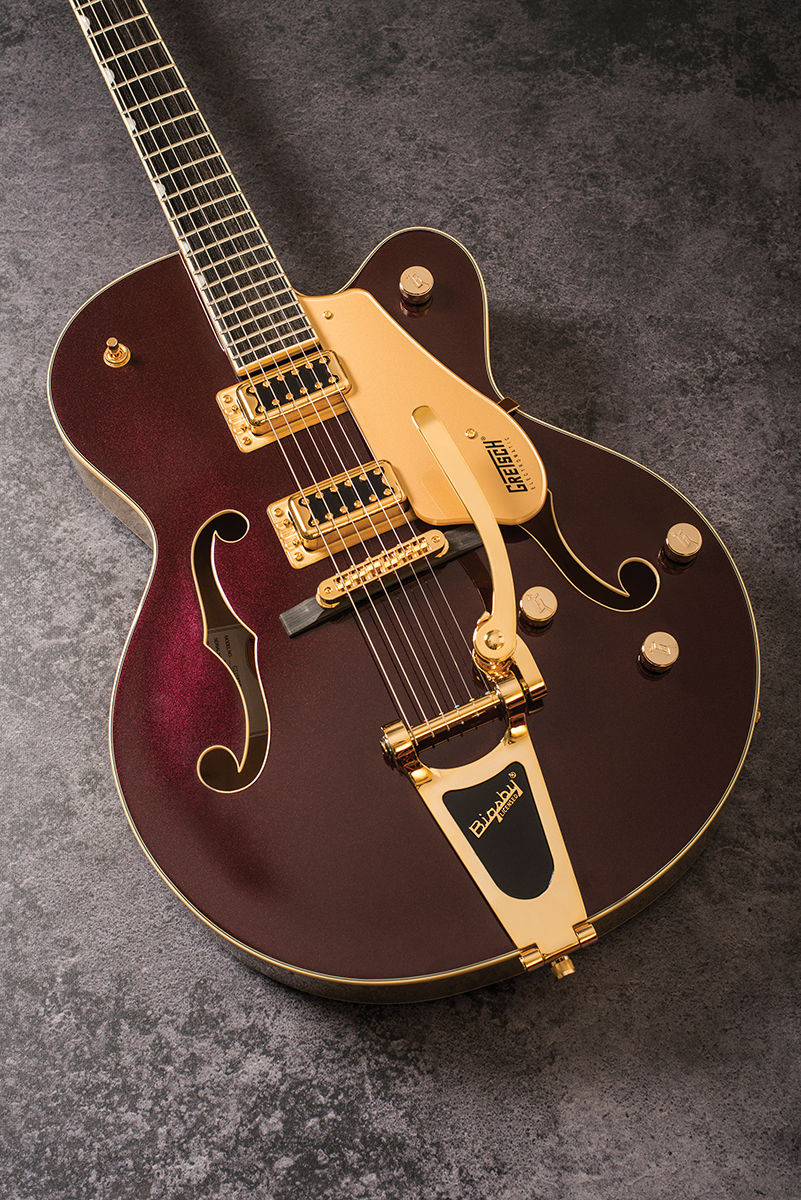 Running through our Rift PR18, there isn’t that much in it. Both guitars sound unmistakably Gretsch-like and really couldn’t be mistaken for anything else. The Black Top Filter’Trons do a perfectly decent job and while the High Sensitives in the G6118 are brighter, growlier, clearer and twangier, we enjoy playing both sets.

With their slightly darker and softer tone, the Black Tops share some characteristics with vintage Filter’Trons, but despite their extra brightness, the High Sensitives get closer to the clarity, dynamics, crisp definition and depth of tone of the old ones. At higher volumes, these guitars prove surprisingly feedback- resistant and both sustain slightly longer and more evenly than our 6120 conversion reference. 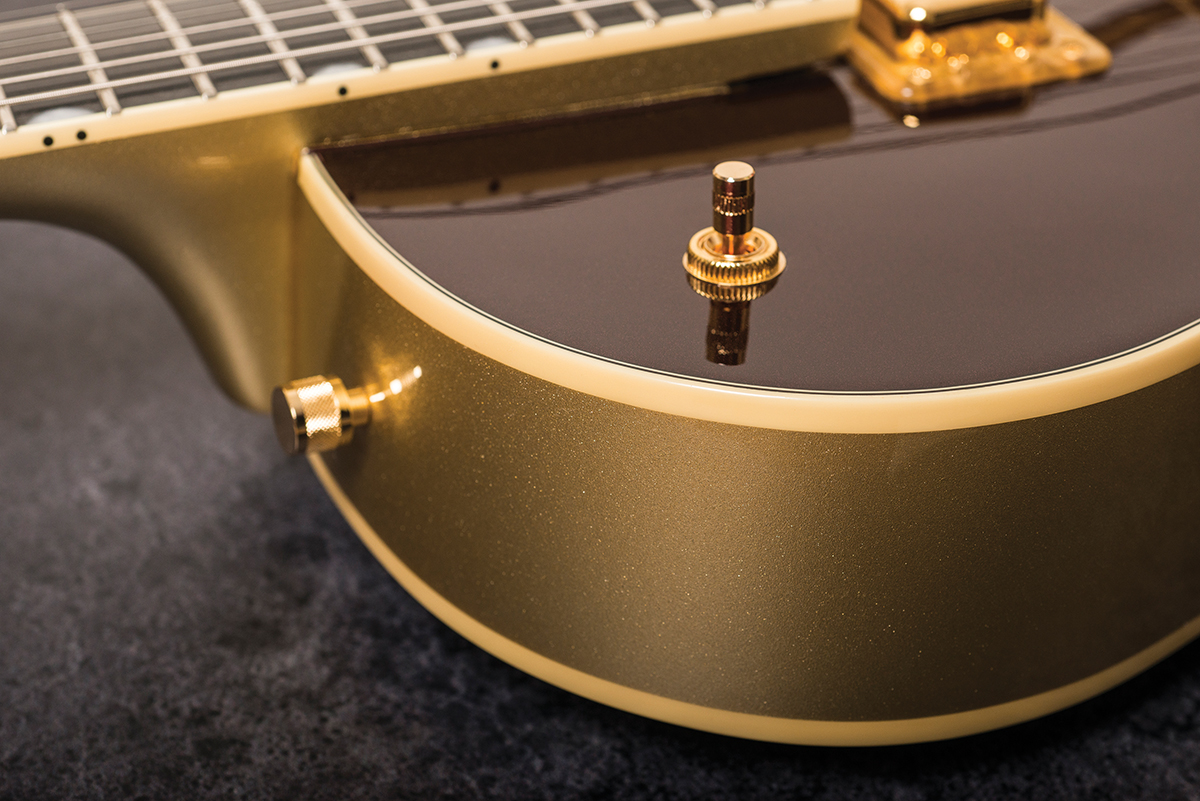 Although we often begin by comparing the unplugged tones, there’s a reason we have done things differently this time. Acoustically both guitars are very resonant, lively and responsive. However the G6118 is significantly smoother, deeper and richer in the mids, and consequently doesn’t sound as bright. The bridges are the determining factor rather than the trestle bracing or the three-ply body, and we know because we swapped them.
This inspires us to try some pickup tweaks, too, and when the Black Tops are raised and the pole screws are adjusted to even up the string balance, the G5420 begins to close the gap on the G6118 and our vintage Gretsch.

The G5420 is ripe for upgrades and most would be very simple to perform as funds allow. Tuner swaps are commonplace, although it wouldn’t be necessary in this case. Similarly the licensed Bigsby works fine and looks good, but V-cut Bigsbys are available, along with nicer looking pickguards. 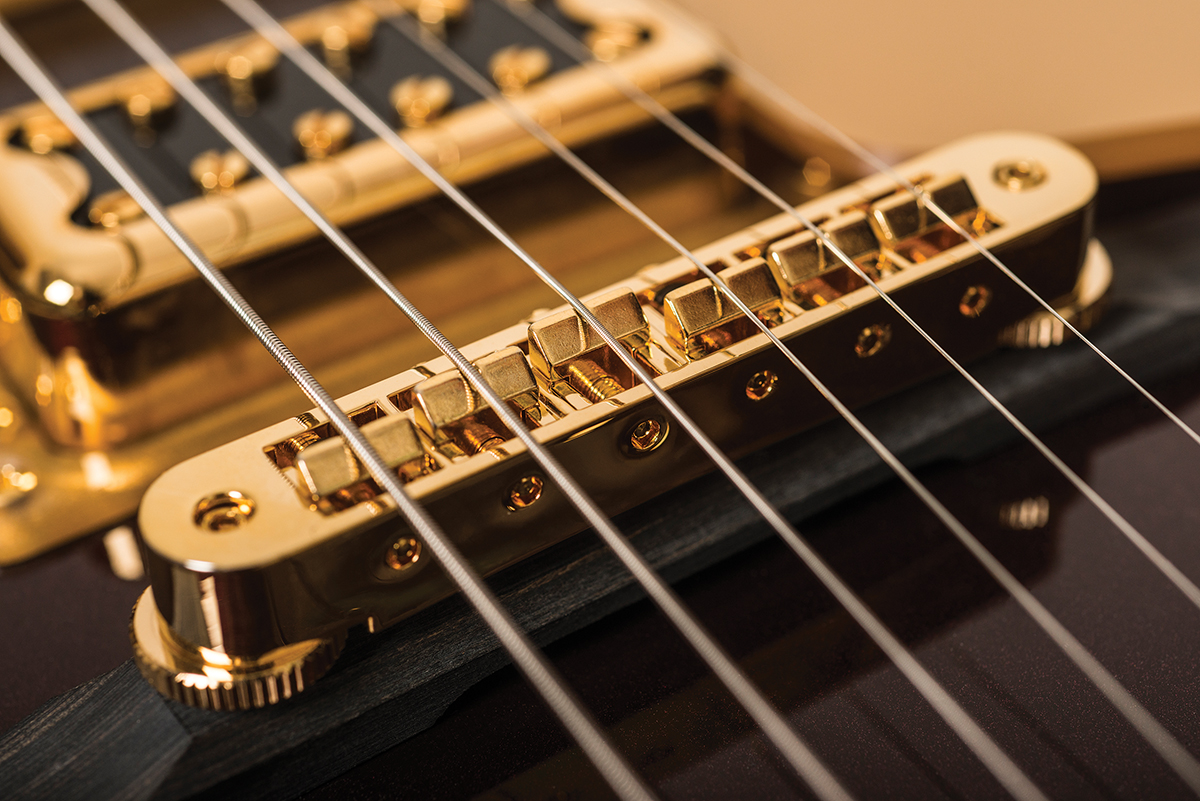 The big f-holes make the tone capacitor easy to access and swap, and a wide choice of replacement pickups and rings are available for you to install more highly regarded Filter’Trons, Filter’Tron-sized P-90s, Dynasonics and more besides.

Nothing feasible can be done about the absence of trestle bracing, although a competent luthier could probably install a couple of spruce struts under the bracing by going through the bridge pickup hole. You’ll have to live with the five-ply body, but if you play loud and use a lot of amp gain, the less willing resonance of the Korean construction may work in its favour.

If you only perform one upgrade, we’d suggest installing a bar bridge because of its transformative effect on acoustic and electric tone. Make no mistake, the G6118 is better built and nicer to play, but the stock G5420 is a worthy guitar that has the potential to look and sound even better after a few tweaks and well considered upgrades. 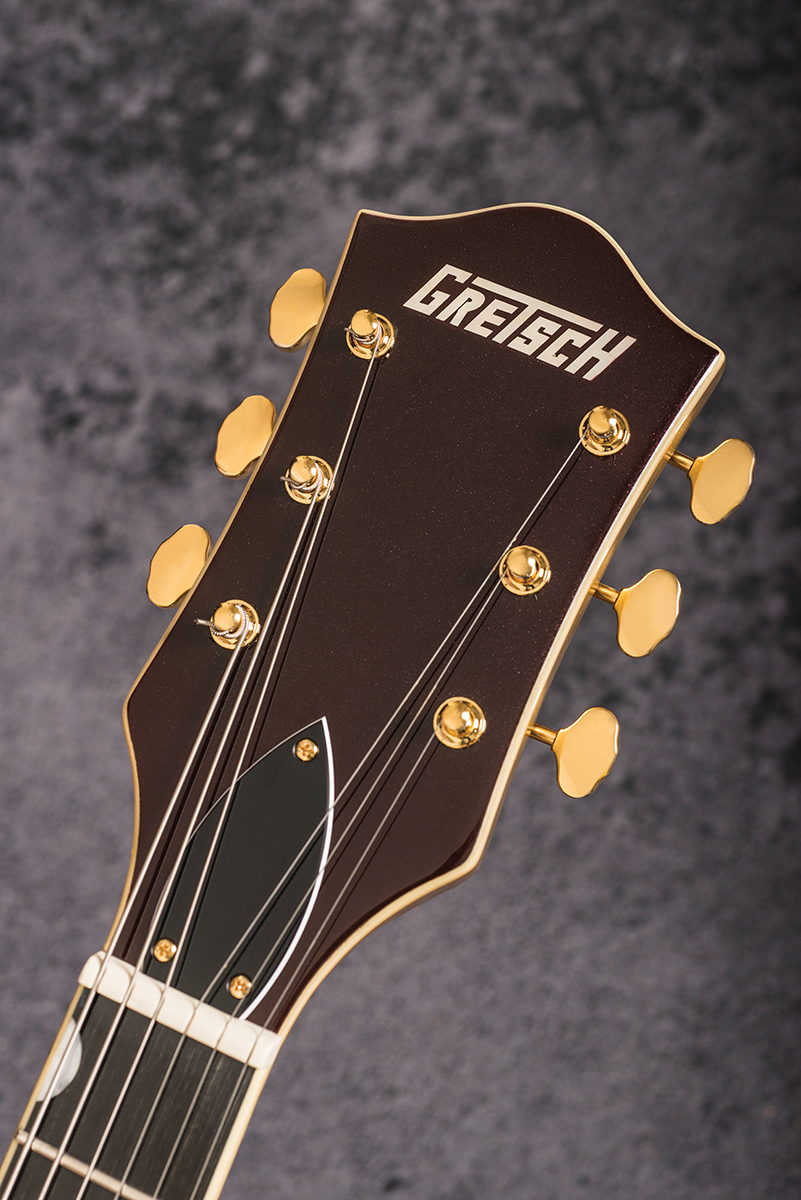 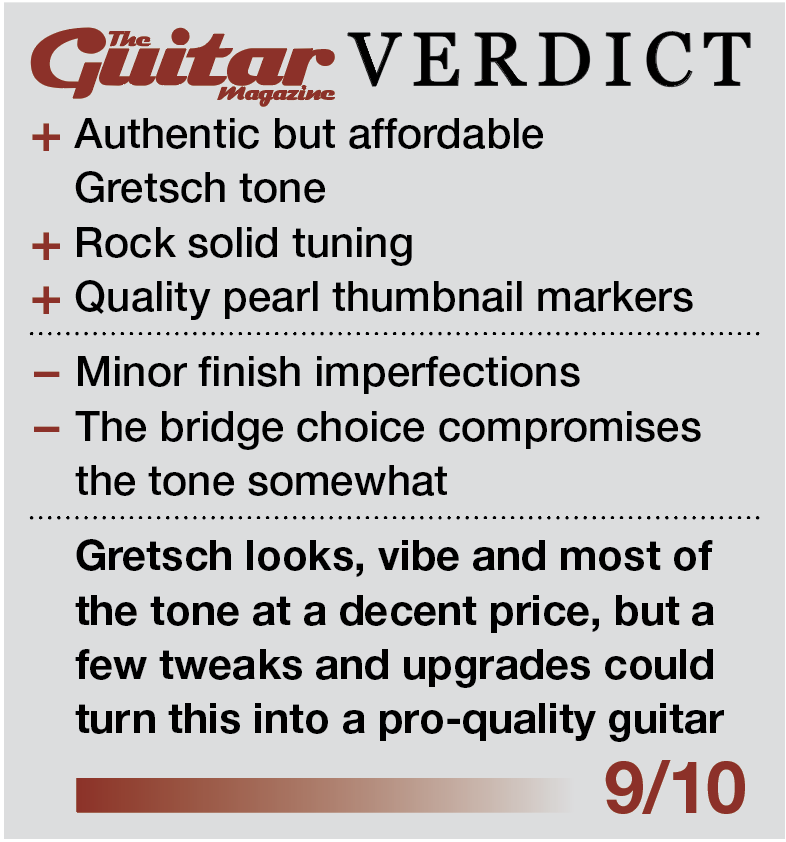 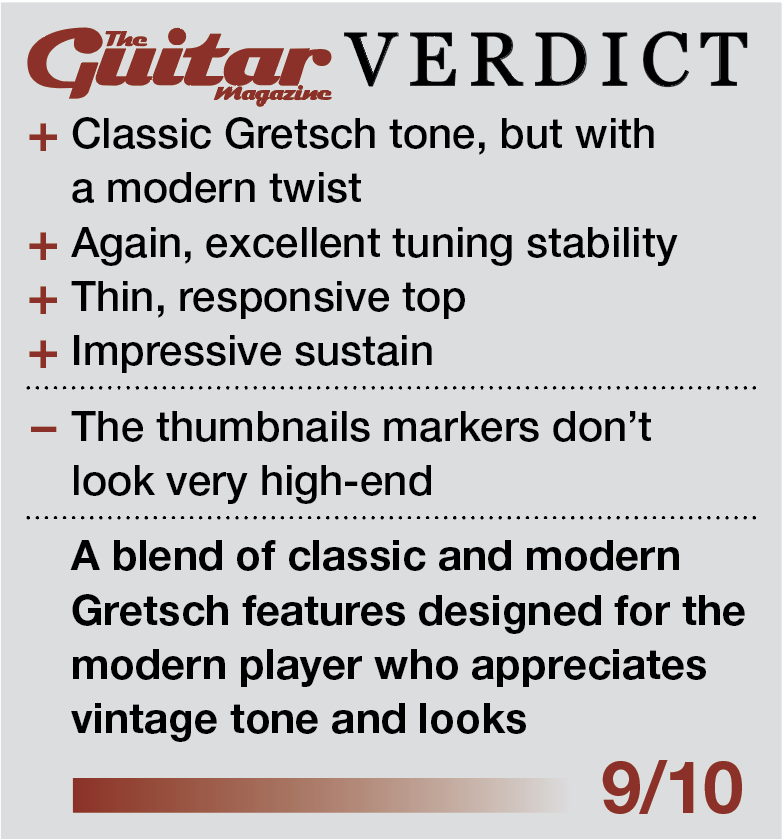