After Gretsch introduced the affordable Streamliner Series, the Electromatic line could only move up. Huw Price investigates… 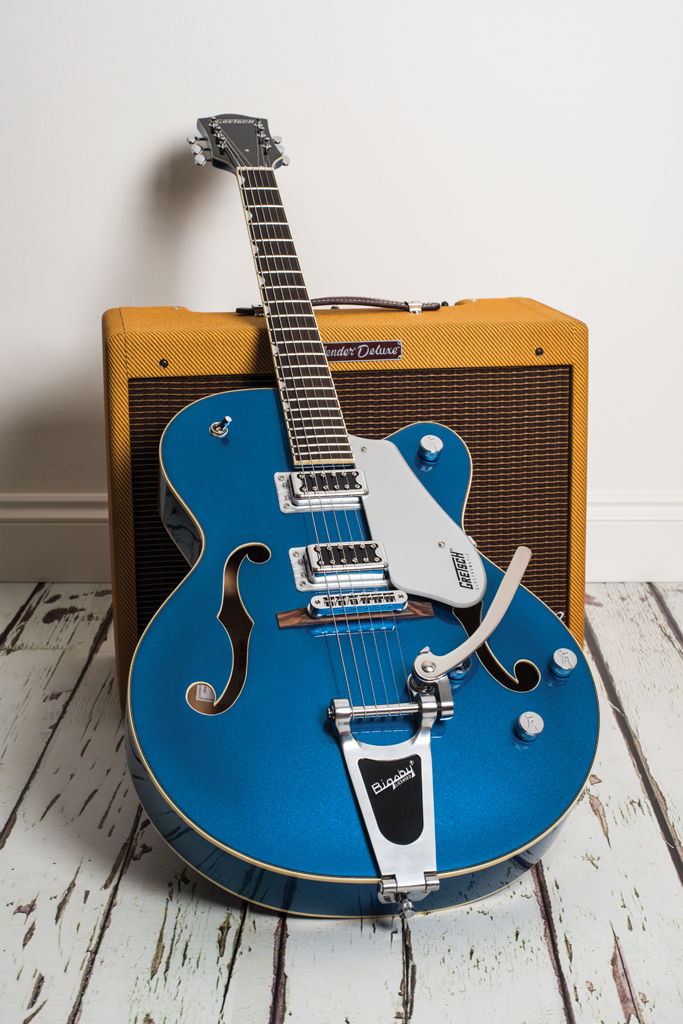 Gretsch really upped its game with the new Streamliner series, so much so that you might have wondered if the old Electromatic lineup may have lost some of its raison d’être. Fear not: Gretsch has responded by introducing a raft of Electromatic upgrades, but it has maintained the same price point.

Many of these upgrades are cosmetic and perhaps the most obvious changes have been made to the headstocks. The large-paddle mid-50s outline has changed to a smaller late-50s shape; binding has been added and the Electromatic logo has been shifted southwards to the pickguard.

Vintage-style open-geared tuners have replaced the sealed units on the six-string models. Personally, I’m delighted to see them ± they work smoothly and hold tuning superbly. I live in hope that Gretsch will one day commission vintage-accurate Waverly repros, if only for the top-spec models, but these are more than good enough to be going on with.

Synthetic bone has been upgraded to Graphtec NuBone (um, okay), and the thumbnail markers are back on ‘board after a humpy ride. The multi-ply, off-white binding looks a heap better than stark white and inside the body, a treble-bleed capacitor has been added to the master volume. Best of all, you get large bound f-holes, which almost shout `classic Gretsch’ across the room.

Although very much rooted in Gretsch tradition, the Electromatics have certain contemporary concessions. tune-o-matic-style bridges have found their way onto countless Gretsches, both old and new, and many prefer the more accurate intonation they can provide. The controls are also slightly simplified by the absence of a `mud switch’. Instead, you get a master volume, individual volumes and a master tone to go with the three-way pickup selector.

Vintage Gretsches were made with three-layer laminates, but the current Electromatic models have five layers. Consequently, these guitars have a more solid and robust feel, along with a touch more weight. This solidbody/hollowbody hybrid feel is aided and abetted by a neck joint that extends to the 20th fret and a single post beneath the bridge that ties the top to the back. It’s sort of a half-trestle arrangement. 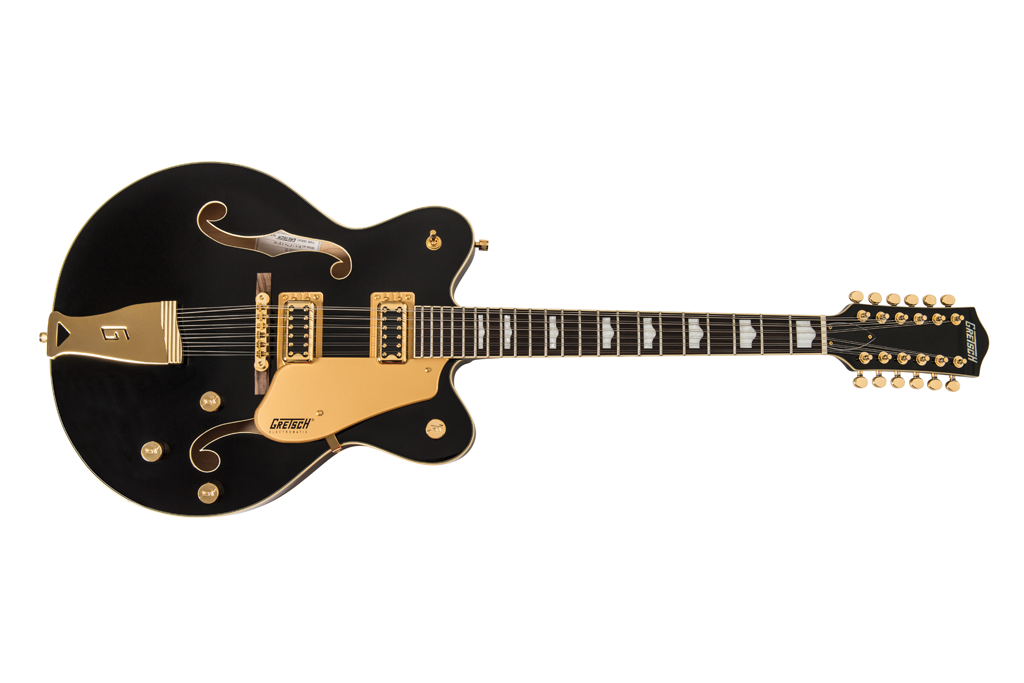 This is a formidable-looking instrument, especially since the hardware has been upgraded from chrome to gold. The metalwork absolutely gleams against the jet-black gloss finish; the off-white binding looks fantastic and Gretsch has stuck with the hump-block markers.Die-cast tuners are used because there simply isn’t enough space to accommodate the larger footprint of the open gears used on its six-string stablemate, so there’s a touch of neck heaviness. Besides that, the general feel and weight of this guitar make it supremely comfortable. 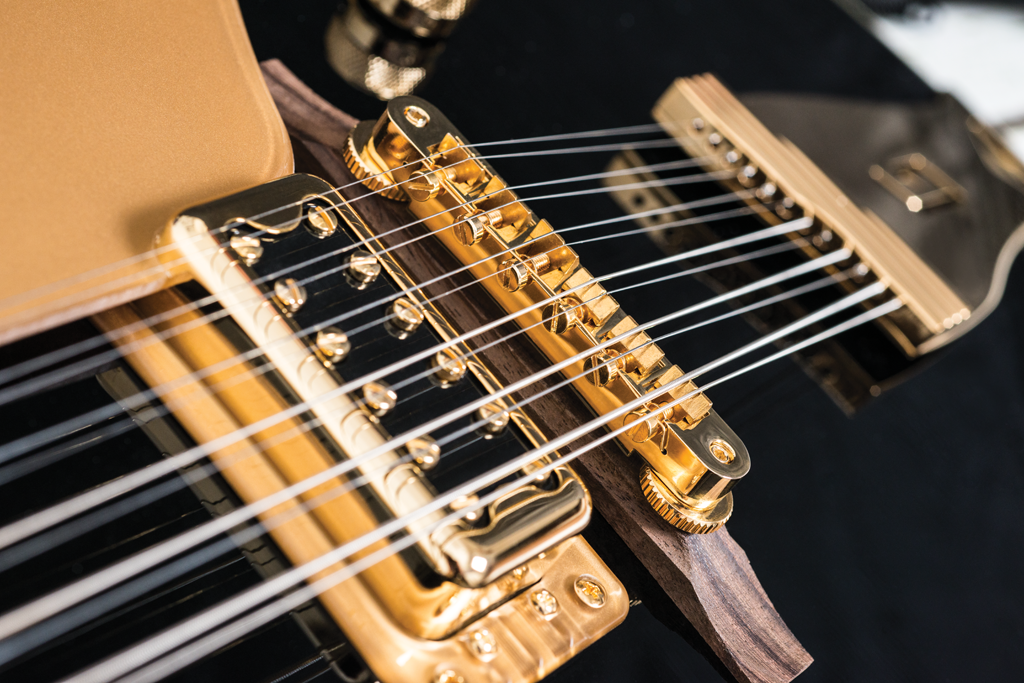 This is the best unplugged tone I’ve heard from an electric 12-string since I last played a vintage Fender Coronado. It’s also possibly the easiest playing electric 12 I’ve encountered, and the intonation is superb. Unlike some 12-strings, it does exactly what you want and there’s no necessity to show it who’s the boss.

Some electric 12s leave you wondering if life might be simpler with a harmoniser or a chorus pedal, because the 12-string tone can be frustratingly muted. The G5422G-12 leaves no room for ambiguity, because its 12-string character is unmistakeable. 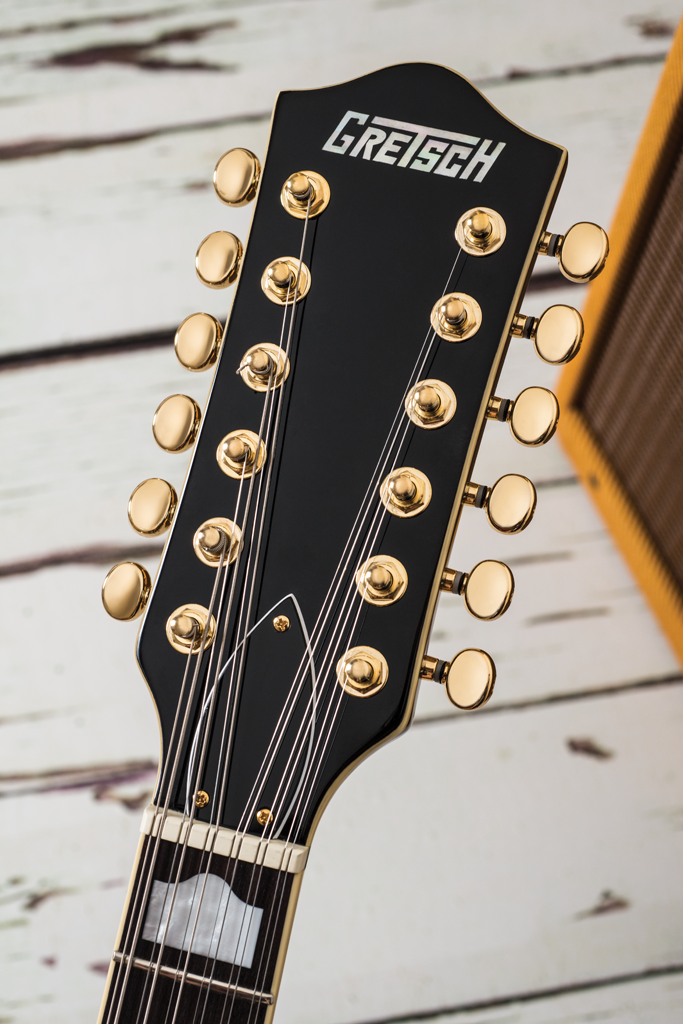 The pickups do a superb job of capturing the airy acoustic chime and adding a bit of electronic fairy dust. It can jangle with the best of them and the string spacing is well judged or strumming and arpeggiating alike. Bass notes sound solid, trebles are bright but not shrill and string-to-string balance requires no compressor assistance.

Although its vibe and sound is firmly rooted in the 60s, the G5422G-12 can be used to create fascinating textures and ambient effects when you start mixing it up with delay, modulation and reverb. All very inspiring. 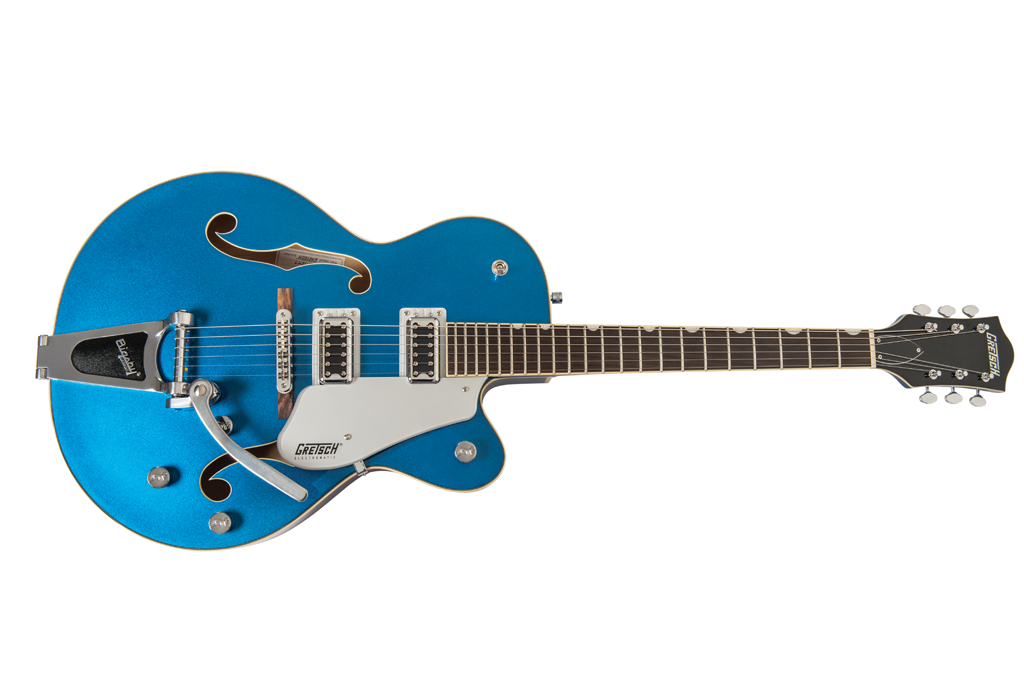 Okay, I’ll admit that I’m a sucker for Gretsch guitars with flashy finishes. It’s probably something to do with the incongruity of such traditionally styled jazz instruments and the types of finish a 50s street racer might have painted his hotrod. So this Fairlane Blue metallic finish had me hooked right away.

Overall, the build quality impresses enormously. The bridge base fit in particular deserves a mention, because I can’t see any gaps whatsoever. The only complaints I have are the one-size- fits-all feel of the NuBone nut and some scraper marks on the inside surfaces of the f-hole bindingº but I’m really just nitpicking. 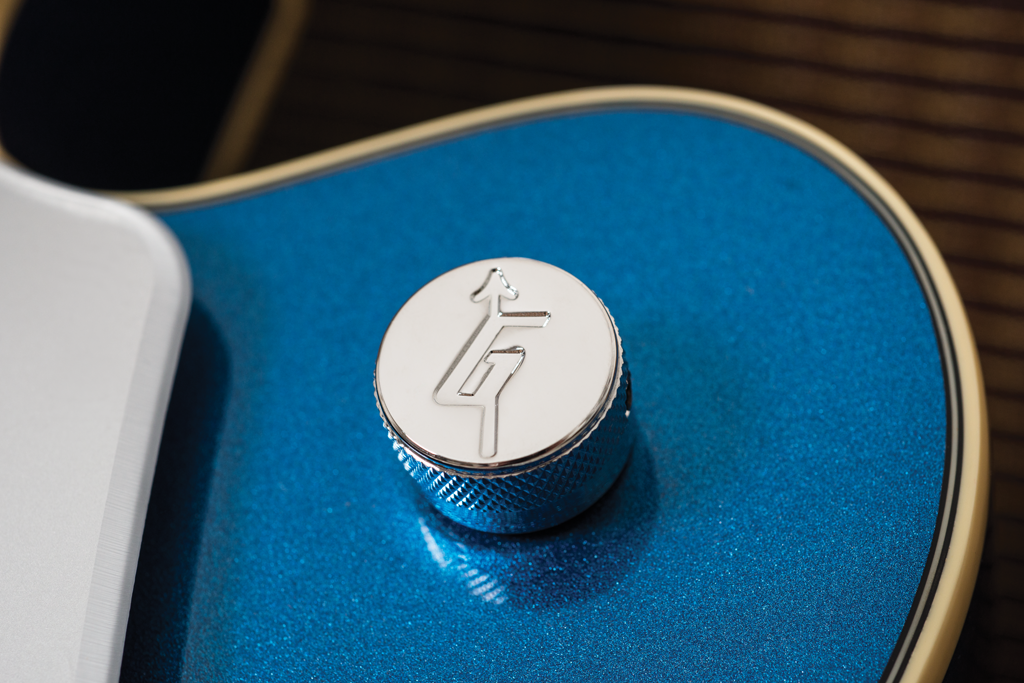 Although it’s a big armful, the 5420T’s lap and strap balance is really good, and the neck profile is just deep enough to feel appropriate for the body without being offputting for those who don’t like fat necks. It’s characterful, without straying too far from the generic.

The sound post dampens acoustic response to add sustain and reduce feedback, but it’s still fun to play unplugged, with its naturally jangly treble. There is some buzzing from the bridge area and some choking out around the 14th fret, but both are easy enough to remedy.

The pickups sound like Filter’Trons should, but with a little added bark and grit. The bridge delights with a phasey honk across the wound strings, a sparkly treble and enough of that wiry, countrified `squark’ to remind you why mellow jazz stylings were always more closely associated with a different `G’ brand. This is more Townshend power chords, Aussie riffs and rockin’ twang. 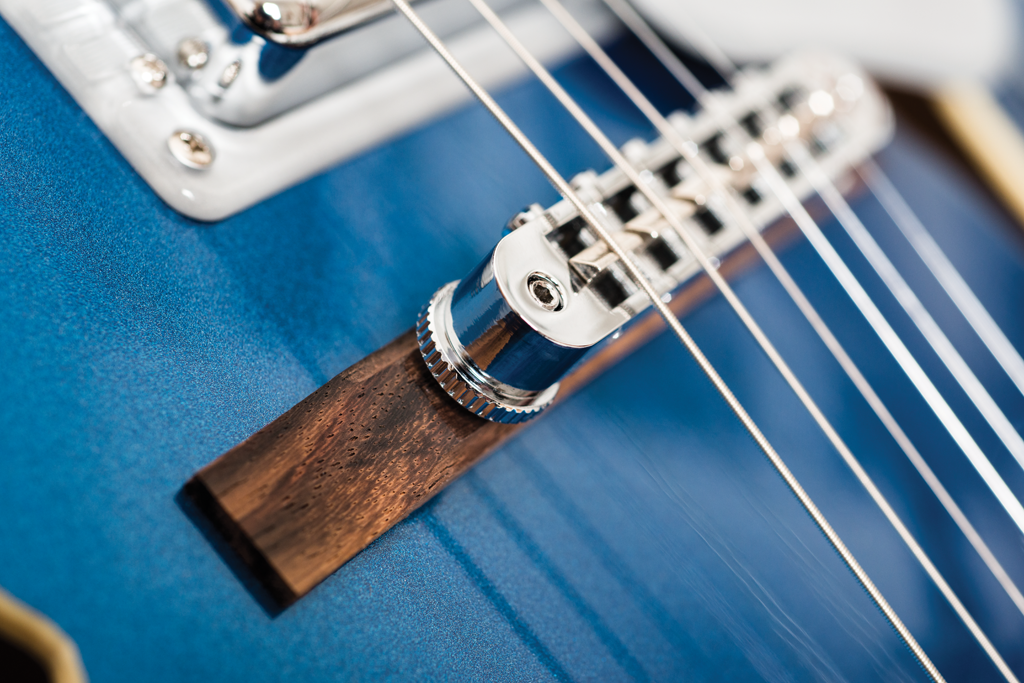 Having said that, the contrasting neck pickup dishes up loads more woody goodness in the lows and rounded sustain in the treble, with an articulate ping at the front of notes. It’s a creditable jazz tone that can get very bluesy with a touch of overdrive and even veer into hard rock and fusion with high gain.

The inbetween position hollows out the mids and seems to soften the transient attack. If you like playing fingerstyle, this is the place to be. With a thumb pick and a touch of slapback, I was utterly transported.

Gretsch’s Streamliners and Electromatics offer superb value for money. If you don’t have the funds or inclination to go above £500, the Streamliners won’t disappoint, but the Electromatics are a significant step up for the extra money.

As well as looking, feeling and sounding better, the Blacktop Filter’Trons provide that undeniable whiff of authenticity. I’ve come to regard them as a sonic option, rather than a cheaper alternative to the name-brand Filter’Trons. For most of us, a 12-string electric would be a luxury item, but the G5422G-12 has to be regarded as a genuine contender, because it’s outstanding. As for the G5420T, it’s a serious Gretsch at an affordable price, which nevertheless has oodles of customisation potential. 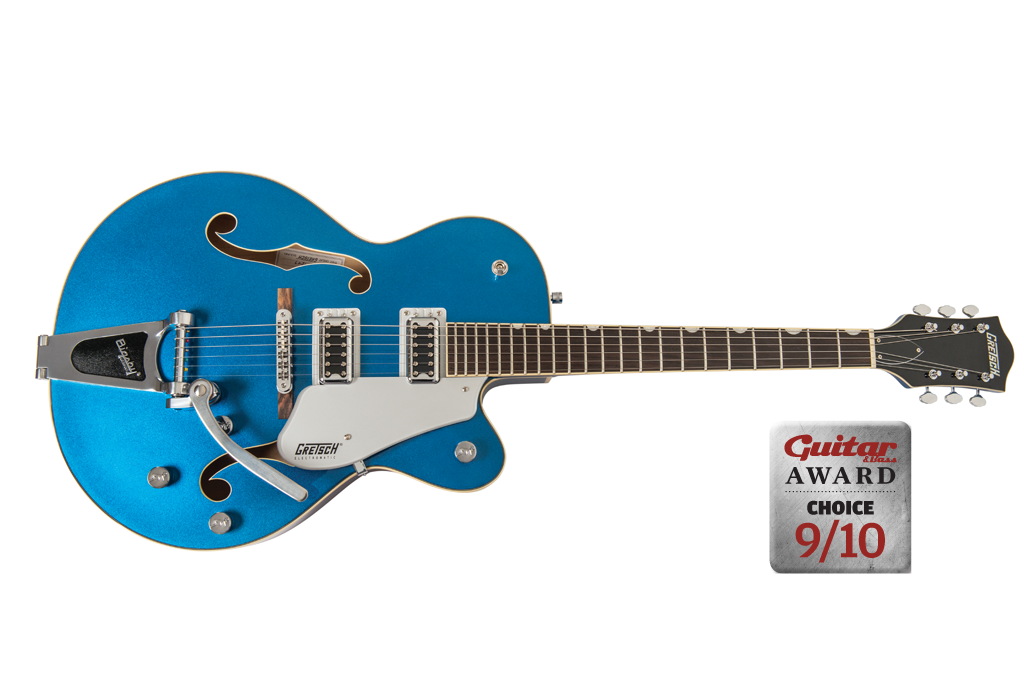 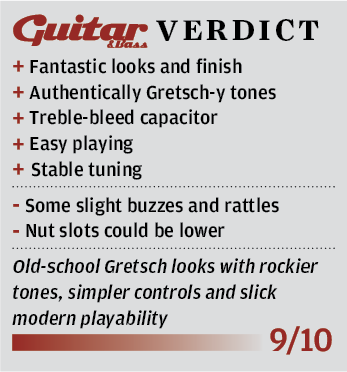 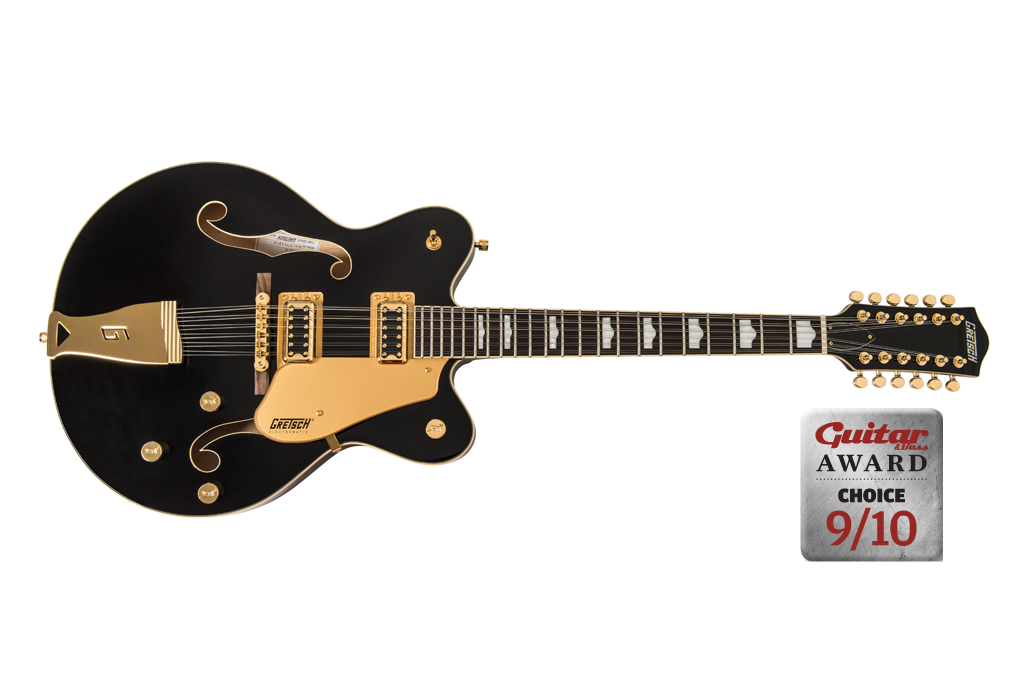 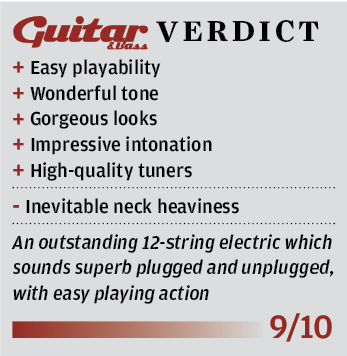