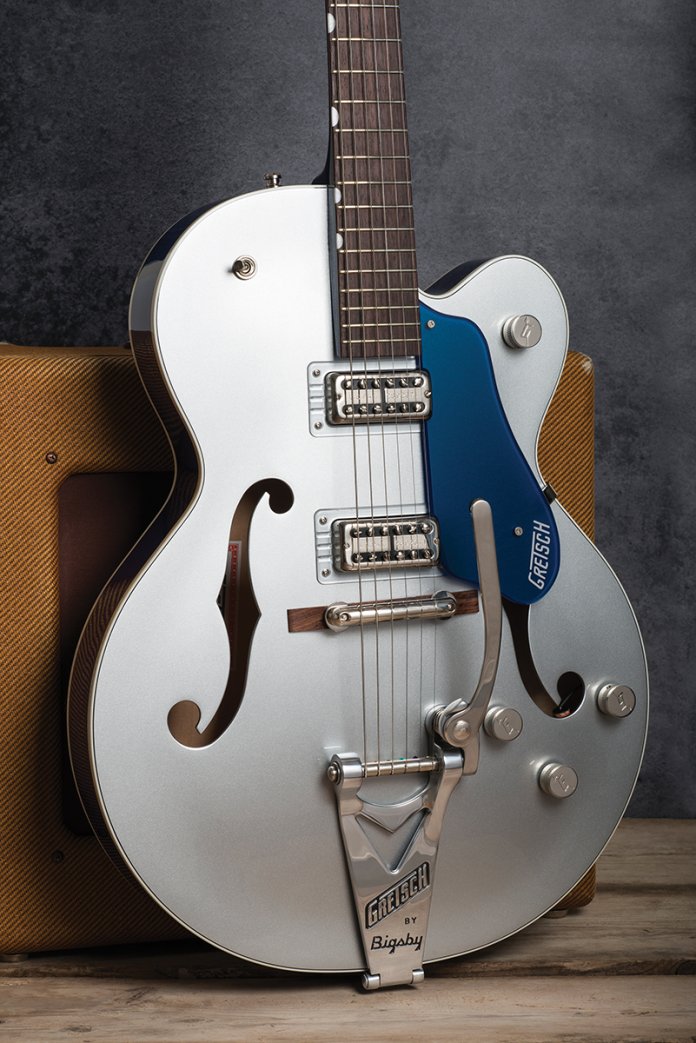 Since its introduction in 1958, the Anniversary has been a mainstay of the Gretsch catalogue. When new, Gretsch took the bewildering decision to spec it out much like the pricier 6120, complete with identical body dimensions, trestle bracing and Filter’Tron pickups. Customers who were prepared to make do without a Bigsby, and binding on the f-holes and fingerboard could nab a high-spec Gretsch at an affordable price.

By 1960 Gretsch ‘downgraded’ the Anniversary by removing the trestles and fitting single-coil HiLo pickups. They’re also fine guitars, but the trestle braced examples are generally regarded as the most desirable.

For the G6118T, Gretsch has chosen to straddle old and new – in essence creating a golden era Anniversary reimagined for modern players. There’s trestle bracing, Filter’Tron pickups and a pinned 6120-spec rocking bar bridge that is vastly superior, both sonically and structurally, to the vintage Space Control unit. 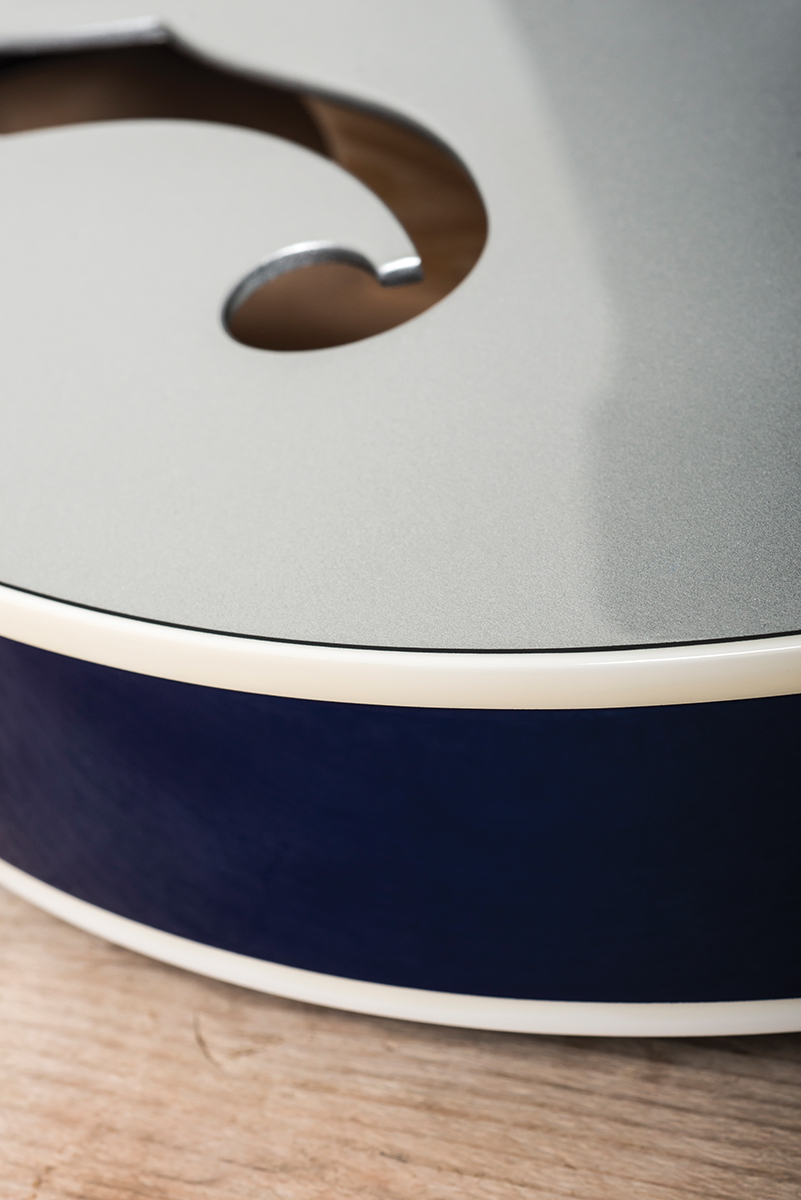 Those who struggle with Bigsby stringing will welcome the contemporary string-through design. Rather than hooking the string balls onto pins set into the rocking bar, and hoping they don’t fall off before you get the string up to tension, simply thread each string through its hole, wrap over and tune up.

Brian Setzer has long been Gretsch’s most high-profile player, and his preference for locking tuners is well known. So, it’s no big surprise to spot a chrome set of locking Gotohs on here. We also appreciate the added strength provided by the metal jack plate.
Our attention then shifts to the electronics and despite appearances, the controls are actually streamlined. Gone is the mud switch – there was never any space on the Anniversaries for a standby switch. Instead the cluster of knobs beneath the Bigsby comprises individual volume controls and a master tone. 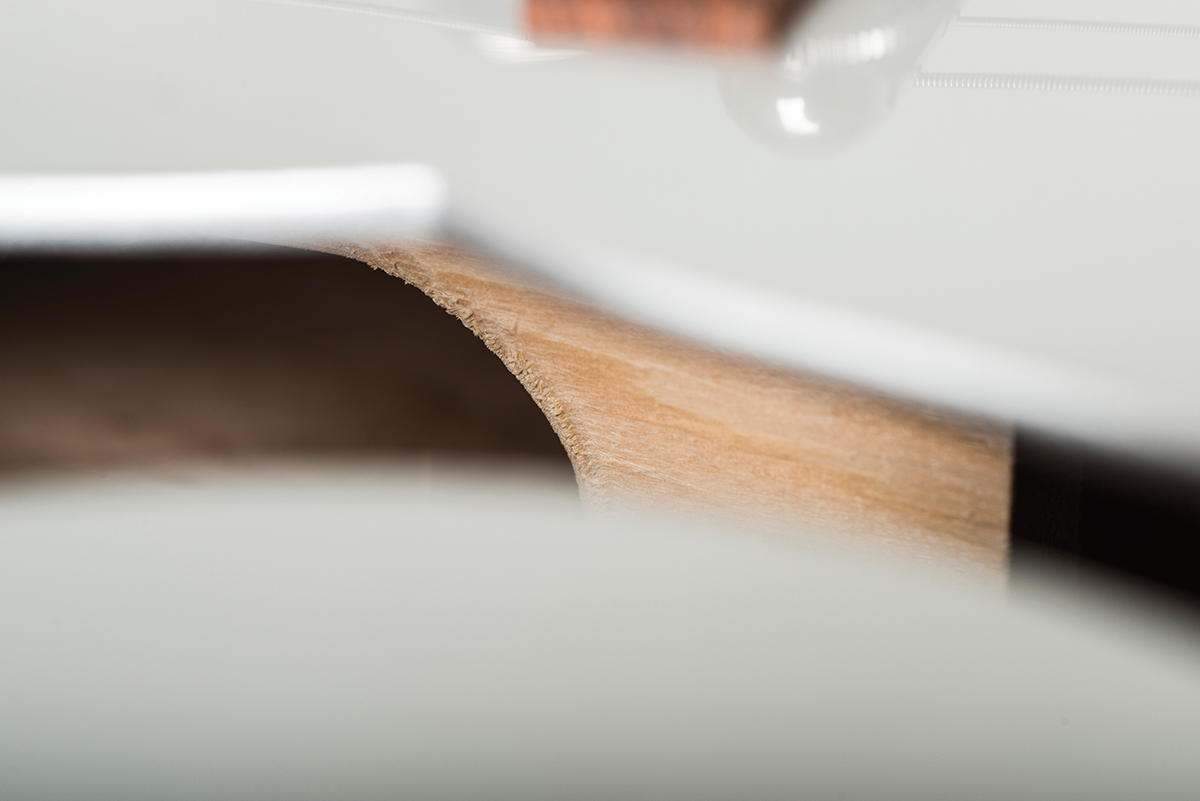 A master volume is located at the cutaway and the single switch is a three-way pickup selector. Gretsch is obviously chuffed about the use of a paper/oil tone cap, too, because it’s placed right under the F-hole where you just can’t miss it.

You can’t see the treble bleed capacitor across the master volume control, but we’re glad to learn the G6118T has one. There’s also a no-load tone pot, which is a smart move because you can get the no-treble-leakage effect a mud switch provides in the centre position, plus fine control of treble response. In other words, it’s the best of both worlds.

Another less obvious feature is the slim 2.25-inch body depth. Gretsch archtops gradually thinned from the mid-50s onwards, and 2.25 inches became the norm in 1961. It’s a great compromise because the body has sufficient internal volume to produce full acoustic tone and you get the vibe of a big single-cut without it feeling like too much of an armful.

Picking it up to play, the G6118T feels a little weightier and more solid than a vintage Gretsch, but the acoustic tone is no less vibrant. It’s also fairly loud, very deep and full, and has a refined smoothness that makes it a pleasure to play unplugged. Even more impressive is the long sustain, and the treble’s robustness coupled with a hint of woody midrange honk provides an unmistakably Gretsch voicing.

We hear a bit more brightness and volume from our own 6120 conversion (which began life as a 1960 Anniversary) but the review guitar has a lower resonance and more of a natural compression effect. For a guitar that may get a load of fingerpicking, that’s no bad thing. 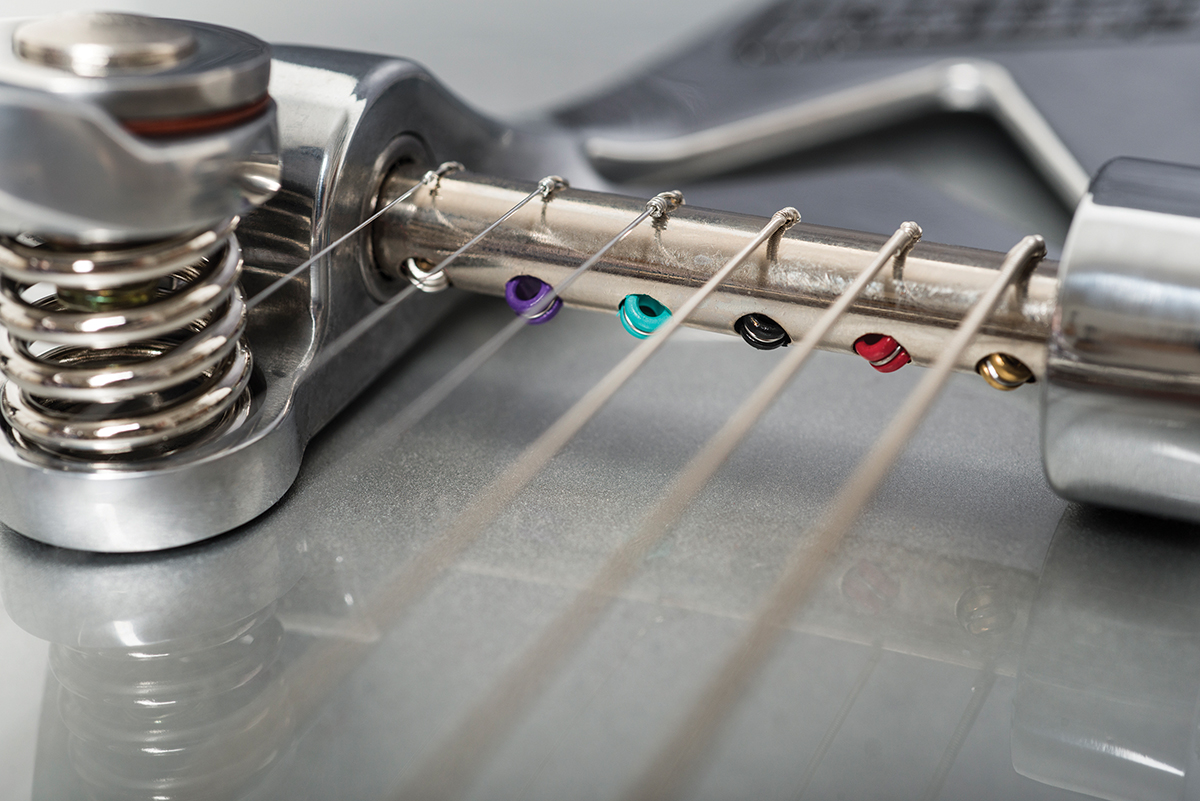 We have previously said that we don’t believe Gretsch High Sensitive Filter’Trons get the credit they deserve, and nothing about these pickups causes us to reconsider. They do sound slightly different to our vintage set, but they have much to recommend them. For starters Gretsch has made them slightly louder, without sacrificing clarity or dynamics.

Since the DC resistance readings are a vintage ballpark 3.88k and 4.57k, and we find them a bit brighter, we think the magnets must be a little stronger. The trade-off is that you don’t quite get the same warm midrange growl and there’s a little less fine detail, but the modern versions get surprisingly close.

Starting clean with our Rift PR18 in Blackface mode, all three pickup settings really excel with superb definition and a treble chime that’s so intense it’s almost like built-in chorus. For crystalline clean twang and that Telecaster-meets-jazzbox Gretsch tone, the bridge pickup delivers the goods.

Flip to the front and the neck pickup rounds things out beautifully while retaining definition. Although these guitars are not generally associated with blues, you get more than enough sweetness and sustain to do the job. In the middle position, there’s that wonderful Gretschy phasiness that works so well for fingerstyle. 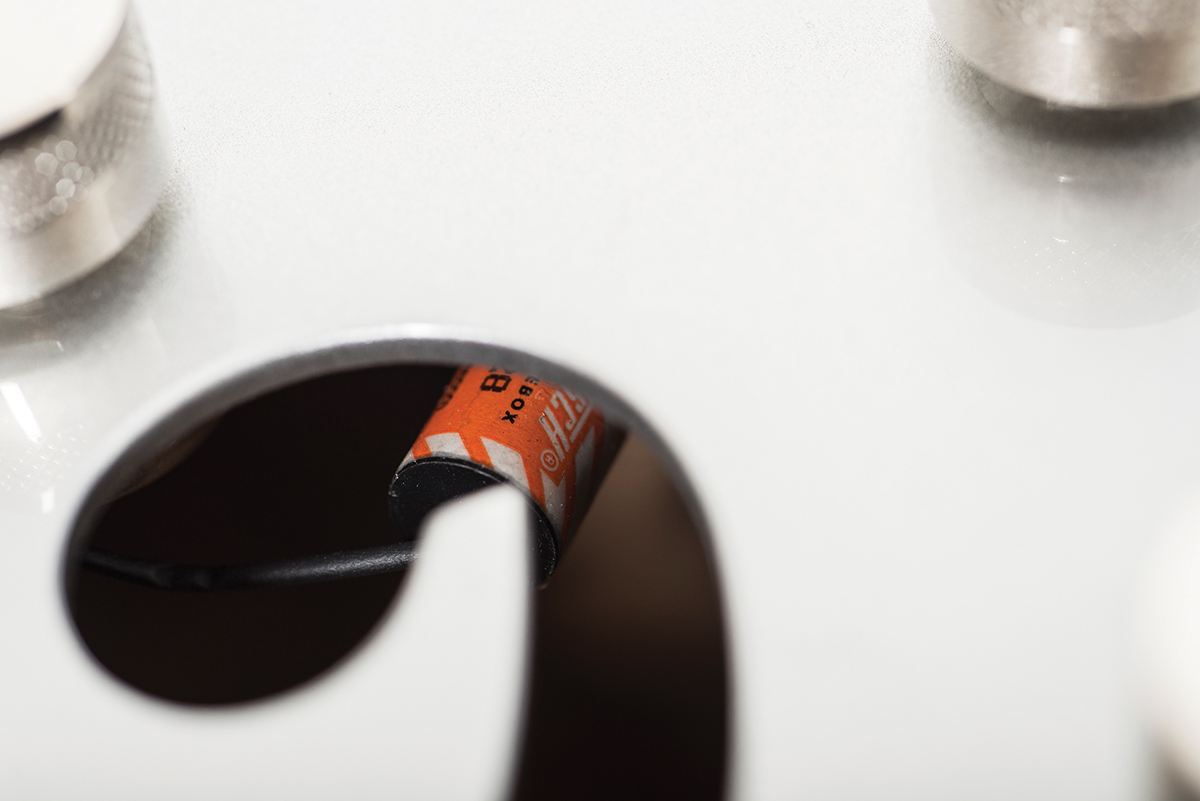 Backing off the neck volume a tad accentuates the effect, and it sounds so good it makes us regret our decision to do without individual volumes on our 6120 project from last year’s Workshop. Overall the G6118T has a more forward and airy voice but it you back off the tone a little, the guitar takes on a woody quack that quickly closes the gap.

Fortunately, this brightness and crispness produces outstanding results with overdrive and fuzz, because the G6118T never gets woolly or indistinct. With added grit, it delivers snarly riffs, big powerchords and cutting solos. It’s is also surprisingly playable at high volume and although you do get feedback, it’s quite easy to control.

Actually, the whole guitar is easy to control and play. The medium/slim U profile is a dead ringer for the neck on this reviewer’s 1963 Tennessean and the fretwork is flawless. We find the Bigsby super smooth and, more importantly, tuning stability is nothing short of remarkable. The G6118T is a thoroughly modern Gretsch that somehow retains all the things we like about old ones. And did we mention it looks amazing? 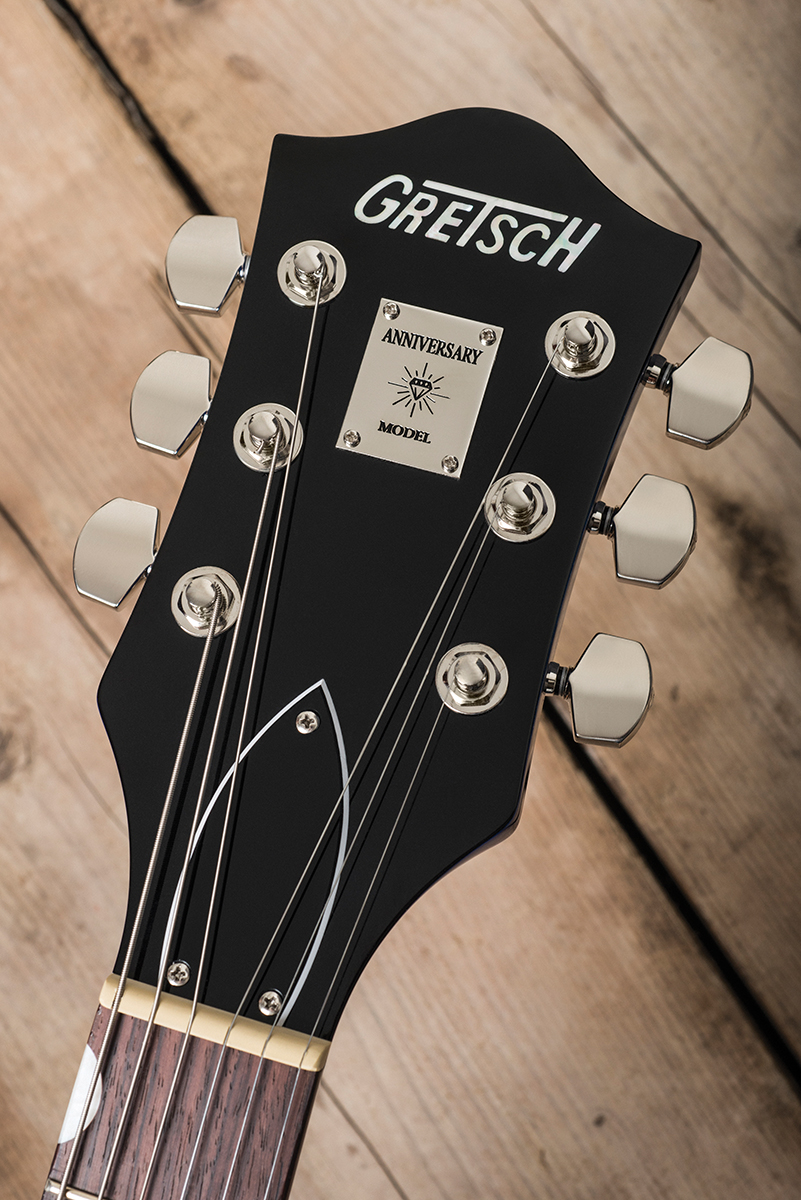 Gene Simmons on the secret to not showing his age: “You just have to worship Satan, that’s all!”