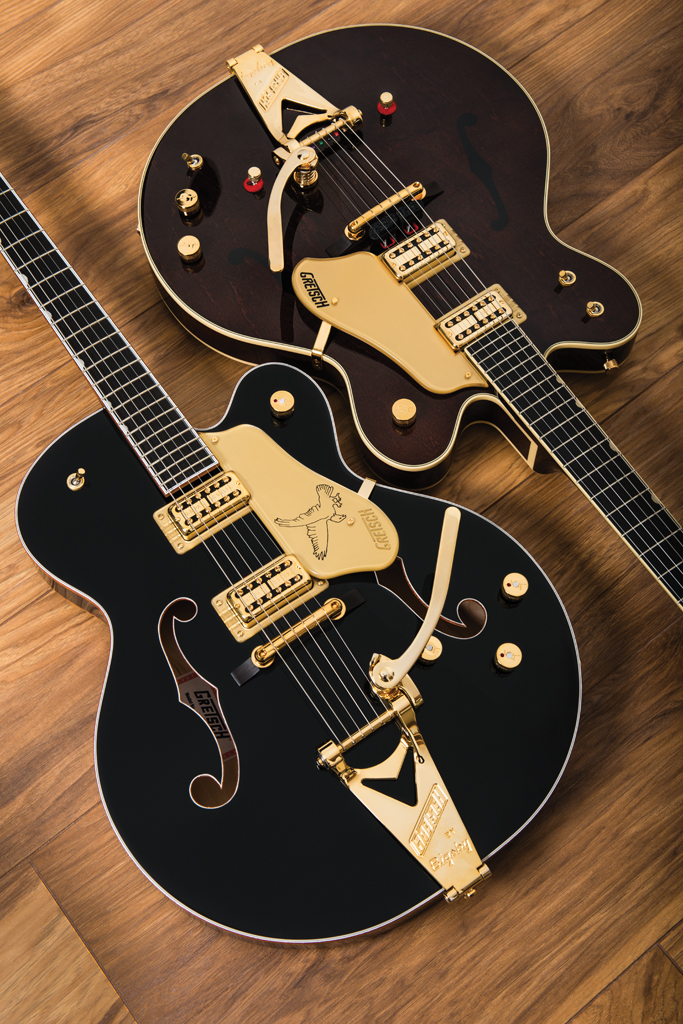 Winter NAMM 2016 saw Gretsch unveil a stack of new models and restructure its Japanese-made Professional Collection into two distinct strands: the Players Edition and the Vintage Select Edition. Broadly speaking, the Vintage Select models are reissues of classic Gretsch guitars from specific years of manufacture, while the Players Edition instruments are designed to be a little more robust and road-worthy.

Gretsch product manager Adam Bowden-Smith explains: “The Vintage Select guitars are period-correct editions of our most famous models from what many consider to be the golden age of Gretsch guitars, so we have models from 1955, ’59, ’62, etc. All years that had a defining effect on the model and the brand as a whole. Having said that, there are some concessions to the modern player: `invisible’ upgrades,  if you will, that don’t spoil the vintage look, such as pinned bridges and treble bleed on the master volume.

“The Players Edition guitars are the modern Gretsch for the modern player. While retaining `That Great Gretsch Sound’ and looks, they have many upgrades that mean your Gretsch can be your main guitar, as we say, `every song, every night’. 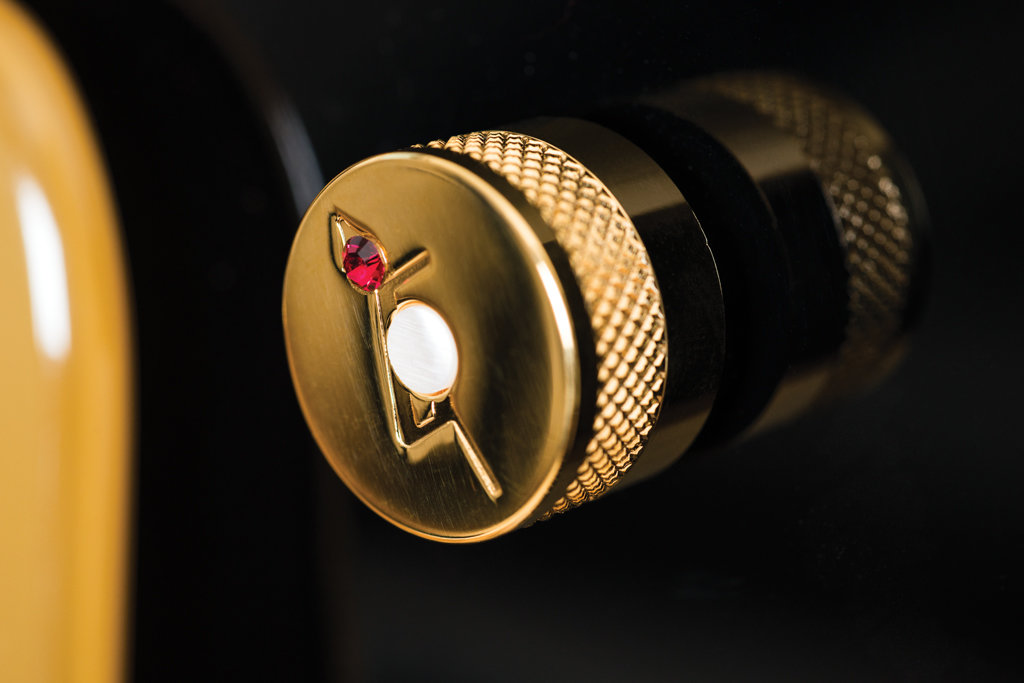 “Improving gigability was our main aim. The String-Thru Bigsby, for example, transforms a Bigsby-equipped guitar from a string-changing headache to a joy! Meanwhile, the locking tuners, Tusq XL nut and pinned Rocking Bar bridge work in cahoots to maximise tuning stability and tone. The bodies are slightly thinner, too, for comfort. Most 50s-style Gretsches are 2.75 inches deep, the Players Edition are 2.25 inches. It doesn’t sound like much, but that half inch makes all the difference!”

Representing the Players Edition here is the marvelously ostentatious G6136T-BLK Players Edition Falcon. In the vintage reissue corner is the G6122T-62 Vintage Select Edition ’62 Chet Atkins Country Gentleman: a dead ringer for the guitar that George Harrison played when 73 million Americans tuned in to watch The Beatles on The Ed Sullivan Show on 9 February 1964. 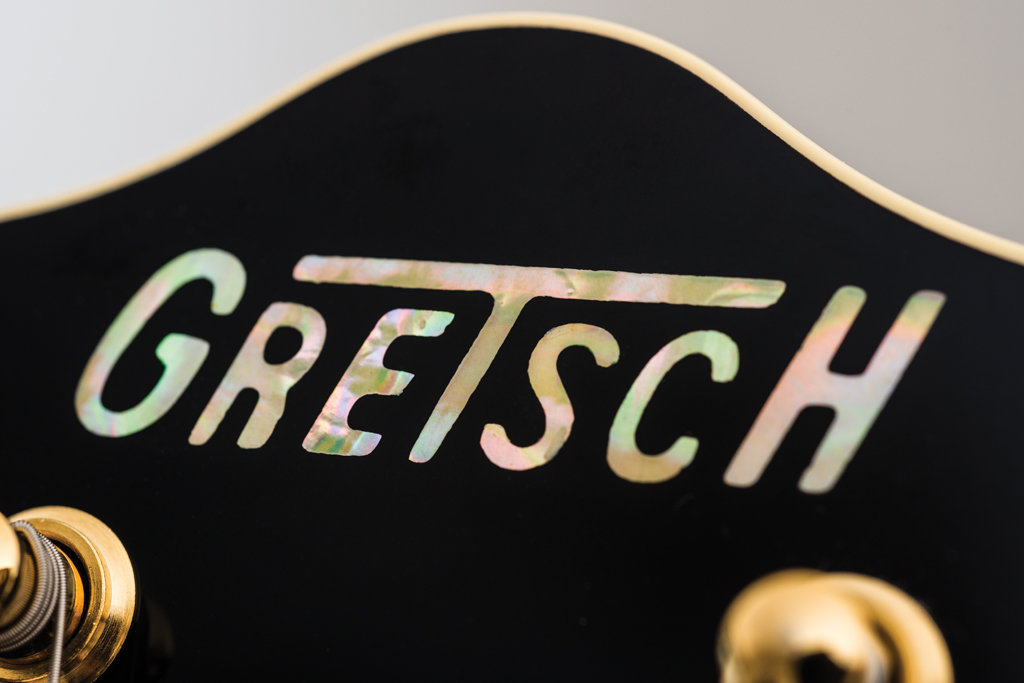 In 2016, when it comes to fit and finish, the workers in the Terada factory in Japan aren’t simply making ’em like they used to in Brooklyn – they’re making them better and with a much higher degree of consistency. Although there’s something special about a good old Gretsch, we’ve encountered some rather wonky vintage examples, too.There’s none of that here: the standard of construction is excellent throughout.

All that said, under hot lights in front of a baying crowd, a traditionally constructed Gretsch can still behave more like a bucking bronco than a trusty steed. The Brylcreem’d masses have devised their own DIY solutions over the years, but 2013 saw Gretsch release a range of Center Block models designed to be considerably more stable and high-volume and gain-friendly than its hollowbody models and cast the net wider than the brand’s heartland rockabilly demographic. 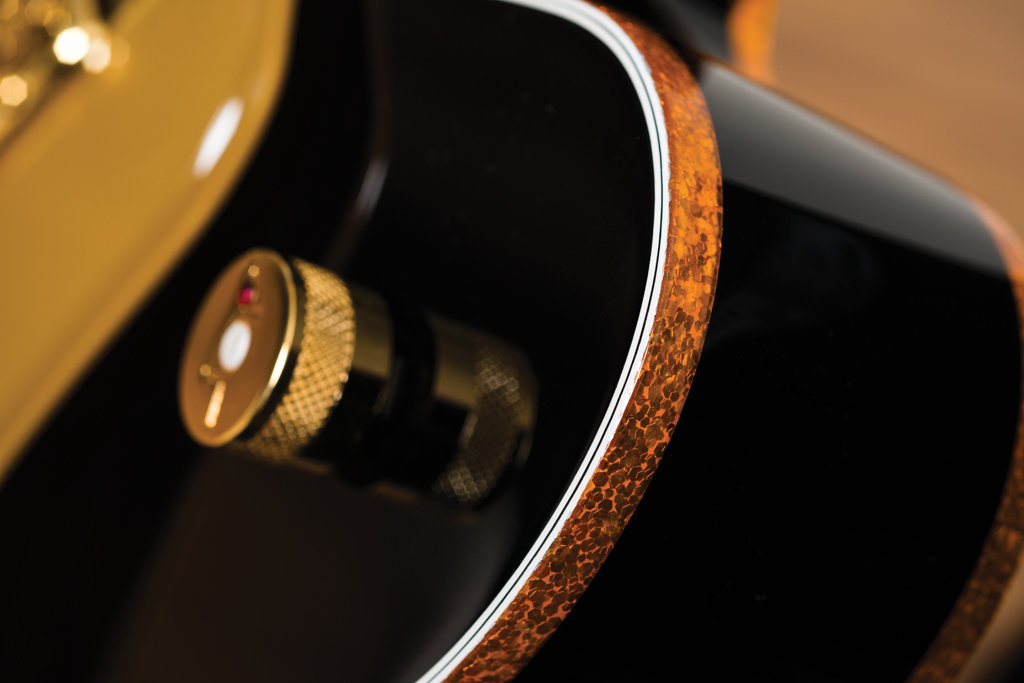 We’re big fans of the G6137TCB Center Block Panther (currently £2,599) to the extent that it’s been this writer’s main gigging and recording guitar – usurping a long-suffering ES-335 – for a couple of years now. Even though Chet Atkins was among those calling for the company to introduce centre-blocks as bands got louder in the late 1950s, there are still plenty of Gretsch fans who consider the lively response and depth of hollowbody construction absolutely essential to the Gretsch archtop experience.

Of course, neither the Players Edition Falcon nor the Vintage Select Edition Country Gentleman are completely hollow inside: the Falcon features ML bracing (designed by Fender/Gretsch guru Mike Lewis and Masao Terada of the Terada company, this is similar to trestle bracing except the back and the top have two points of contact rather than four, retaining contact beneath the bridge but dispensing with the posts near the neck join), while the Country Gentleman has vintage-style parallel tone bars that run lengthways beneath the top. 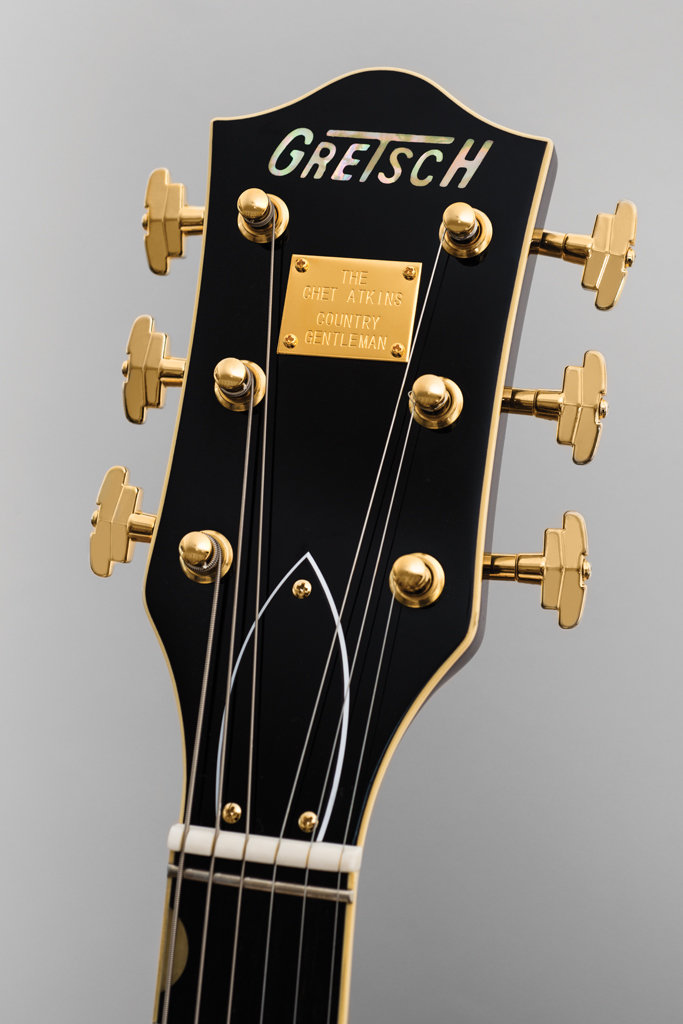 As the owner of a modern Gretsch, who replaced the stock tune-o-matic with a Rocking Bar bridge, this writer can attest to the fact that, when pinned and properly maintained, there are no significant tuning or intonation woes to be had from this design. In addition, the low E string stays put in its channel even when hit very hard – something that can be a problem when the distance between bridge and tailpiece creates a shallow break angle over the bridge. Throw in the drilled anchor bar on the Falcon’s String-Thru Bigsby and string changes are a breeze, too. 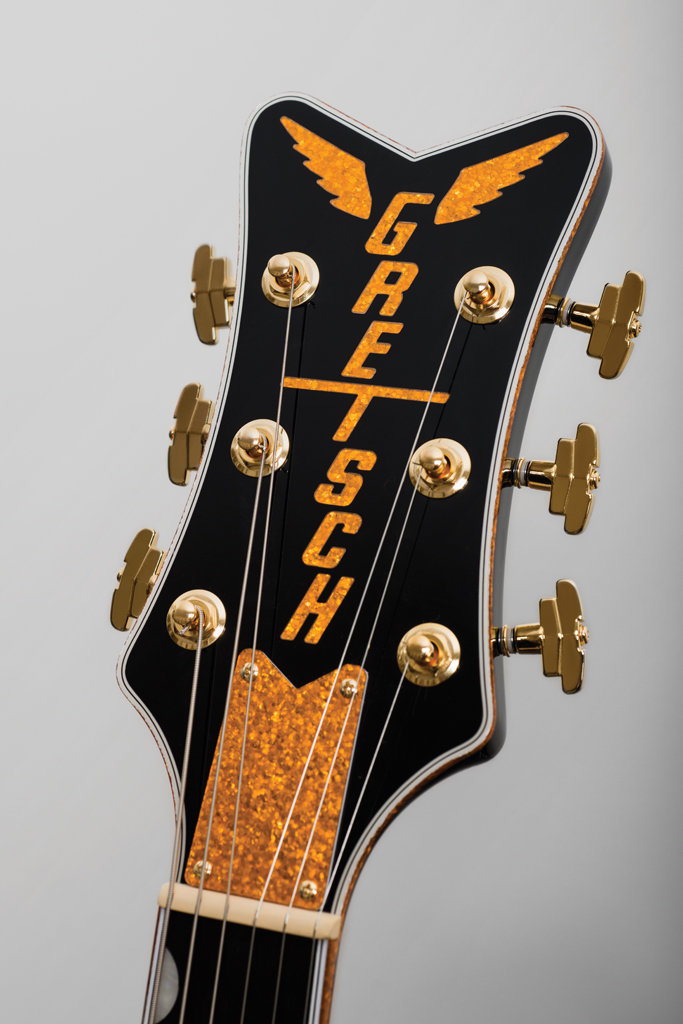 Both necks are slim and comfortable, but although the Vintage Select Country Gentleman incorporates some stealthy pragmatism, it’s worth noting that its large heel and small vintage-style frets make it a less-than-easy ride in positions above the 15th fret. The additional access afforded by the double cutaway is negated somewhat by the heel joining the body at the 14th fret; perhaps counterintuitively, given its single cutaway and longer scale length, high-register bluesy bends are easier to execute on the Falcon, though its slightly larger fretwire helps.

Compared to our own Center Block Panther (loaded with the same High Sensitive Filter’Tron pickups), the Falcon has a considerably bigger plugged-in voice in the neck position, with huge depth for honeyed jazz chords, but still plenty of top-end bite when you pick hard at the bridge during solos. The Panther’s bridge pickup snarls louder with more punch, but that’s where the centre block helps to give it an extra push. 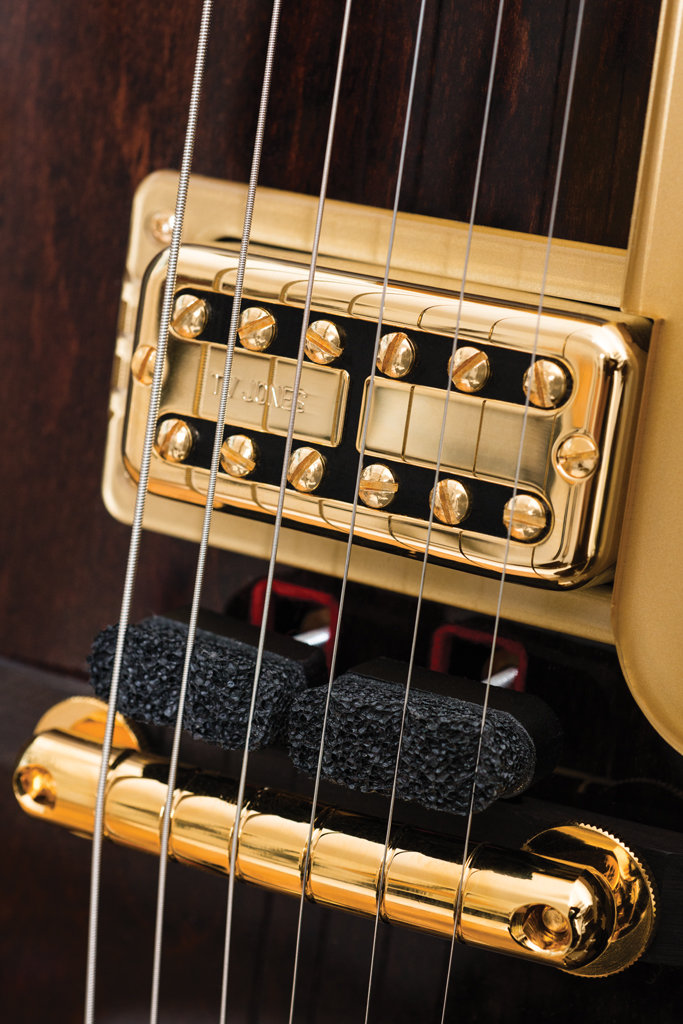 Voices in some corners of the internet will tell you to ditch stock High Sensitive Filter’Tron pickups in favour of TV Jones alternatives, but we would advise against acting in haste. The Japanese units sound very good indeed; they are a little more brash and strident (and certainly higher output) than the TV Jones Classics on the Country Gentleman, but some players may prefer this and we can state from experience that they work brilliantly in a live-band context.

The Country Gent’s pickups are a little softer, smoother and sweeter, but the Japanese Filter’Trons can certainly do sweet too, just as the TVs can do brash twang with the right amp tone! When it comes to pickups, it’s a case of following your ears, not the crowd. 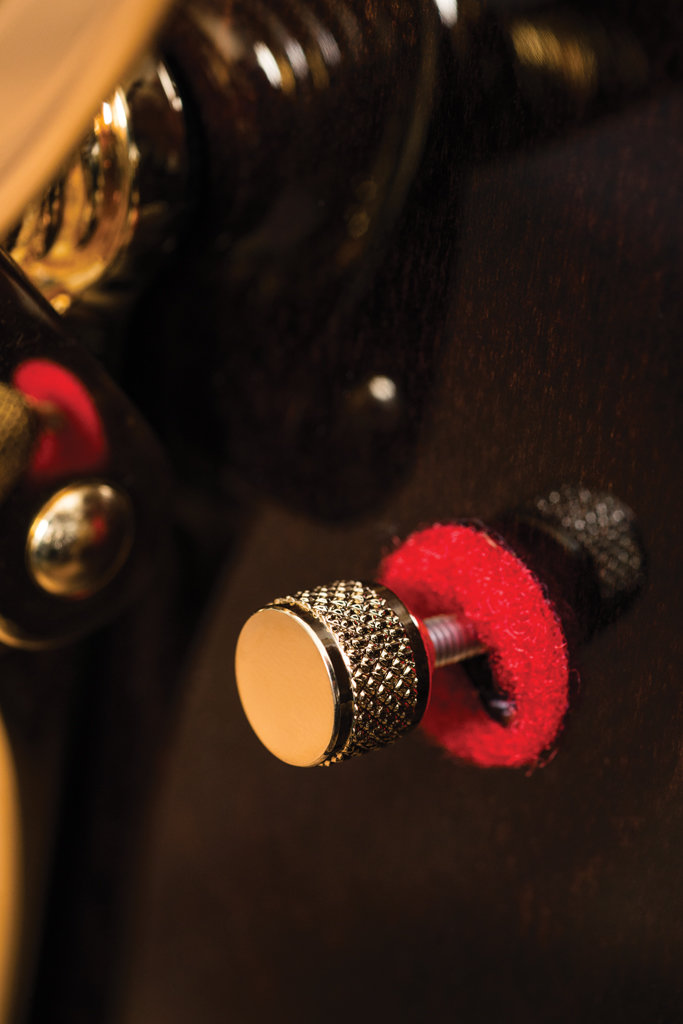 Predictably, the Country Gent’s lack of f-holes and thinline body make it more resistant to feedback than the Falcon, which really does bloom easily into a midrange-y howl. If you get the gain and volume balance right you can control it and make it musical, but we suspect that this isn’t the guitar for playing small pub stages in close proximity to loud amplifiers if you use any kind of drive.

Though most Gretsch demos on YouTube default to Mystery Train-style rockabilly or something similar, there’s so much more to both of these guitars. While we’d still head straight to the Center Block series for a Gretsch that does balls-to-the wall rock, in a contemporary context an instrument such as either of these models is a wonderful paintbrush for creating expansive soundscapes in conjunction with washes of delay and reverb. 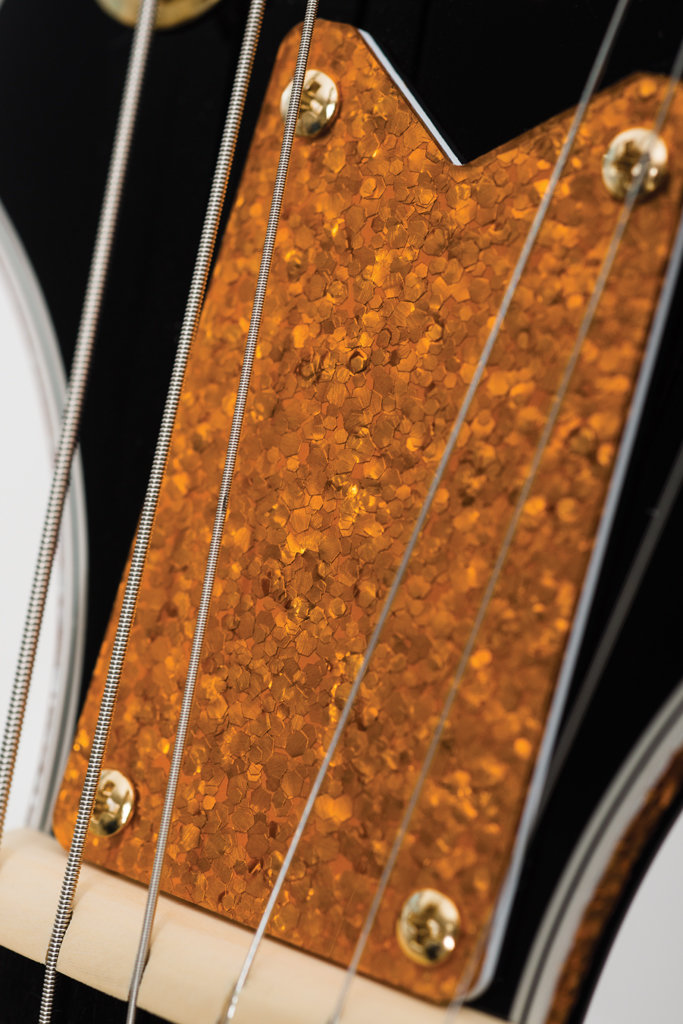 You get a lot more clarity, harmonic complexity and treble out of a Filter’Tron or TV Classic than most other humbuckers for a start, but in all positions it’s a kind of soft, sweet treble that doesn’t sound thin or harsh. The treble bleed on the master volume of both instruments works as advertised, with a noticeably brighter tone when you roll back the level than with the individual pickup volume controls.

The Country Gent’s period-correct features such as the mute and standby switch are useful, too; the latter makes a half-decent killswitch, while the former’s ability to deaden the sustain of just three strings at a time (either the low or high set) and keep them in tune while the others ring allows you to create some really interesting sounds, particularly with raked arpeggios and stabbed chords into cavernous ambience. 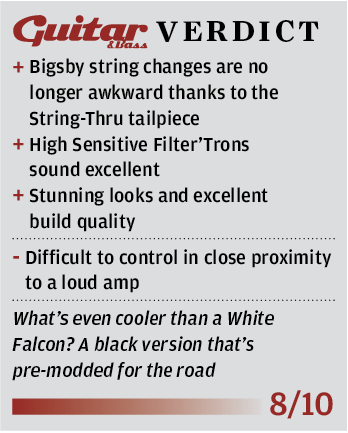 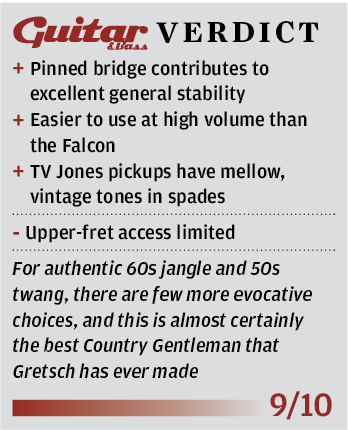