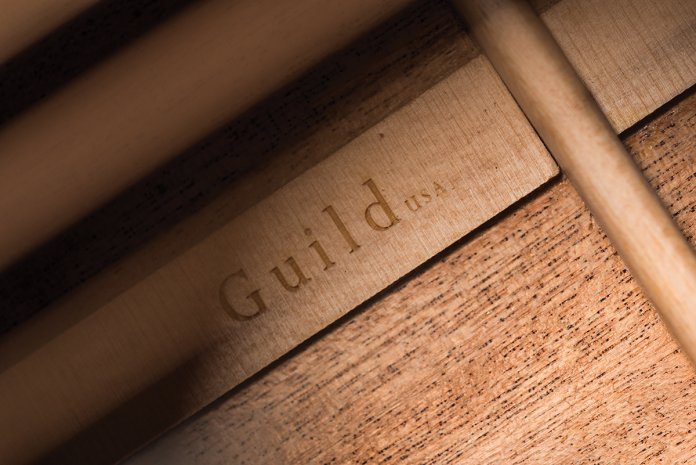 The editor’s email arrived, saying a couple of Guilds were on their way. We guitar reviewers are often last to know exactly what we’re getting, but when a diminutive case was pulled from its shipping box this Nick Drake enthusiast was thrilled to behold a fabled Bryter Layter-style M-20, seen here in Vintage Sunburst, but also available in Natural, just like the guitar that Drake posed with on the cover of his second long-player.

Poor Nick’s M-20 must have been fairly new. Guild made the first ones in 1967, having recently opened a factory in Westerly, Rhode Island, and Guild carried on making guitars there until Fender bought the company in 1995. Production then moved to California, where the workers assembled and finished Westerly-made ‘kits’. 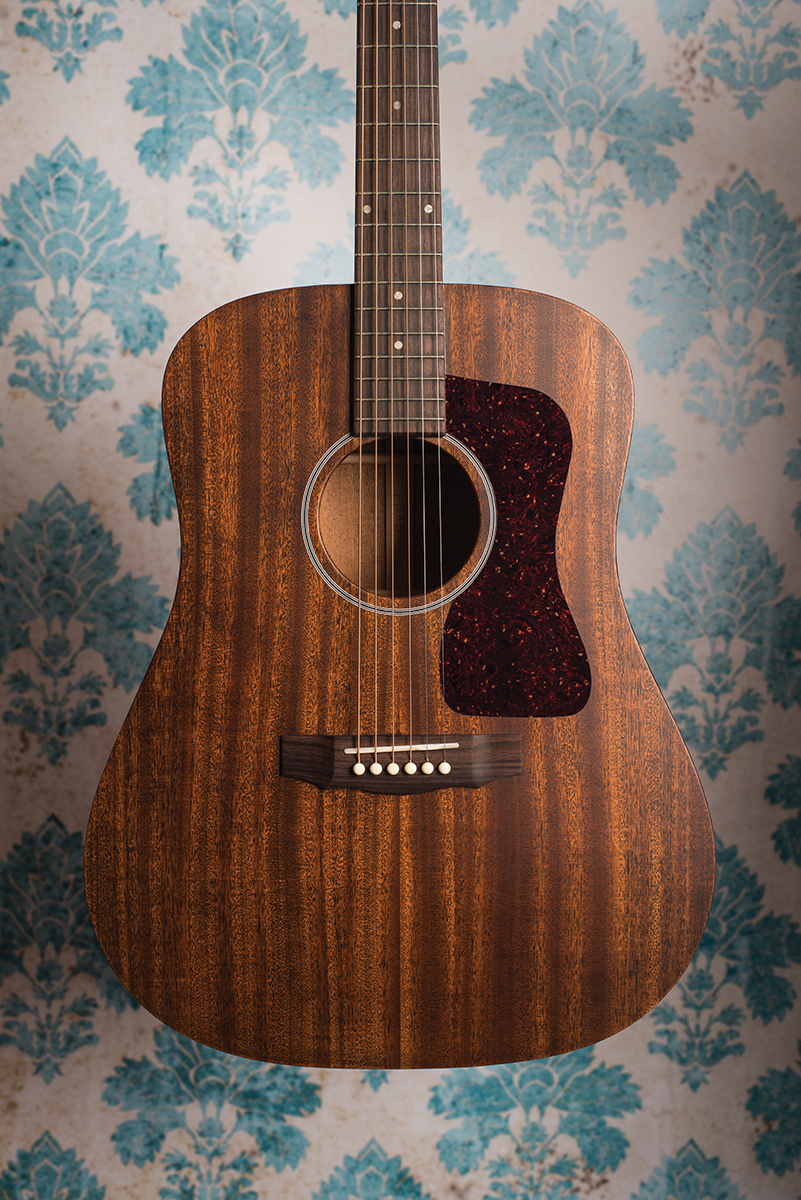 Over the following years, Guild production shifted to Tacoma, Washington and then to New Hartford, Connecticut. In 2014, Fender closed the plant to sell off the company. Having acquired the Guild brand, the Cordoba Music Group opened a new manufacturing facility in Oxnard, California and shipped the old factory equipment west on flatbed trucks. Under the watchful eye of former Gibson Montana master luthier Ren Ferguson, the first production models channel the spirit of the late 1960s, with the concert-sized M-20 joined by the D-20 dreadnought also on review here.

The M-20 has an all-solid but unbound mahogany body with a mortise and tenon jointed mahogany neck, and a rosewood bridge and fingerboard. Decoration is confined to an ABS plastic rosette ring and simple pearl dot markers to match the inlayed headstock logo. The D-20’s design dates back to 1968 and it’s an all-solid, all-mahogany dreadnought. All the hardware and appointments are the same as the M-20’s and it comes in a hardshell case with a built-in humidifier and the option of an LR Baggs Element pickup system.

Any notion that the all-mahogany construction may subdue the treble response is quickly dispelled. Granted, the M-20 doesn’t have the sheen of a spruce top, but it’s at least as bright as the cedar-topped Seagulls we reviewed last month and there’s no shortage of clarity.

Whether you could say the same about the bass response depends on expectations. It’s true this isn’t a deep-sounding guitar, but the body is pretty tiny after all – and with that caveat, the M-20 generates a surprising amount of low-end thump. The A and E strings certainly aren’t subsumed by the middle and treble frequencies.

In terms of sonic character, there’s a lot of charm, with a typically dry and woody all-mahogany directness. There are harmonic overtones aplenty, but fundamental frequencies are not overpowered and the M-20’s clarity and definition impress in standard and deeply dropped tunings.

It’s a natural for fingerstyle that, after a short warm-up period, delivers excellent string-to-string balance without any randomly spiky transients or dominant notes. Depending on your preference, the M-20 lends its voice to blues, country and general rootsy Americana duties. However, it’s equally convincing delivering intimate and ethereal folk voicings in a variety of tunings. 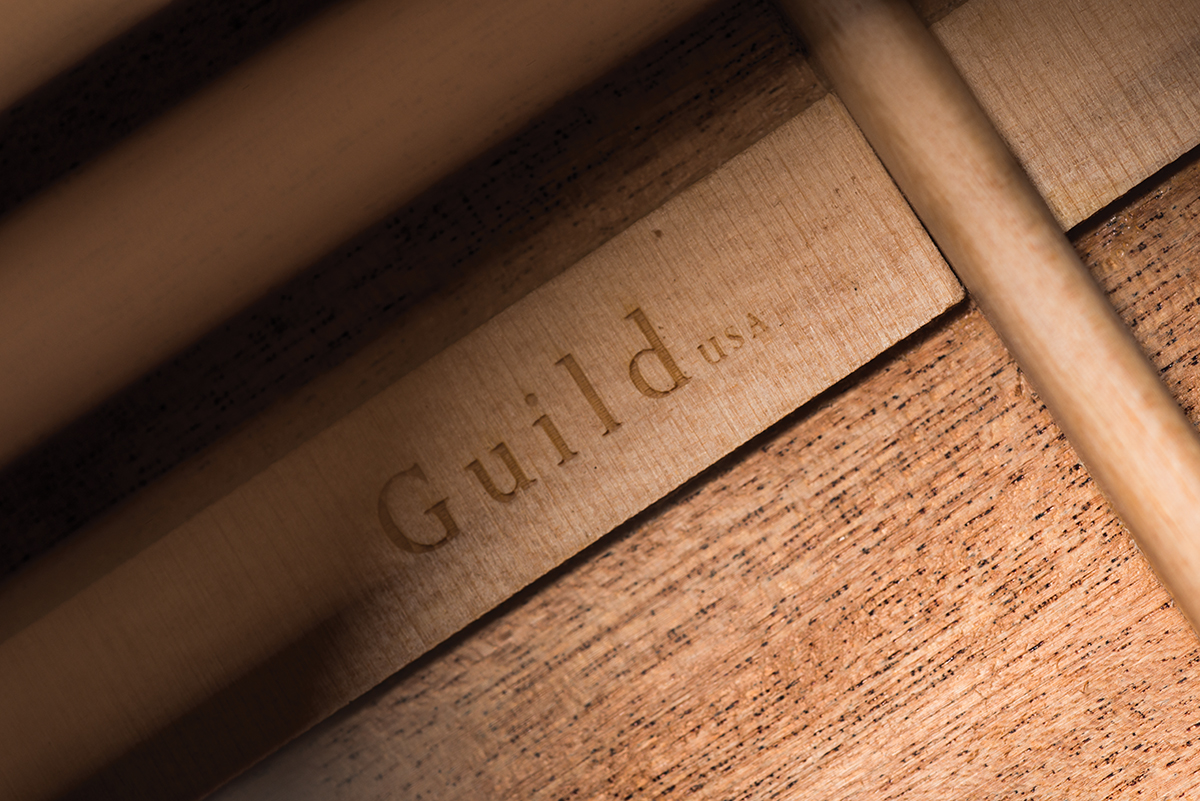 The unavoidable question is whether you can get the Pink Moon tone from the M-20. We would say the answer is ‘not quite, yet’. However, the potential is most certainly there and when the new strings dull down, or with a set of warmer-sounding strings fitted, this M-20 will certainly move in that direction.

Volume, a huge frequency range, thunderous bass and understated power characterise the D-20’s tone. Even those of us who have never understood the aesthetic appeal of dreadnoughts would have to think again after one glorious strum. The term ‘piano-like’ is used occasionally to describe acoustic guitars. Assuming it to mean massive harmonic complexity, a sense of drama and scale, and a solidity of tone, the term is apposite here. The D-20 may lack the scything cut of a spruce top end, but it’s by no means dark sounding. In fact, it’s even richer and quicker to respond than the M-20. 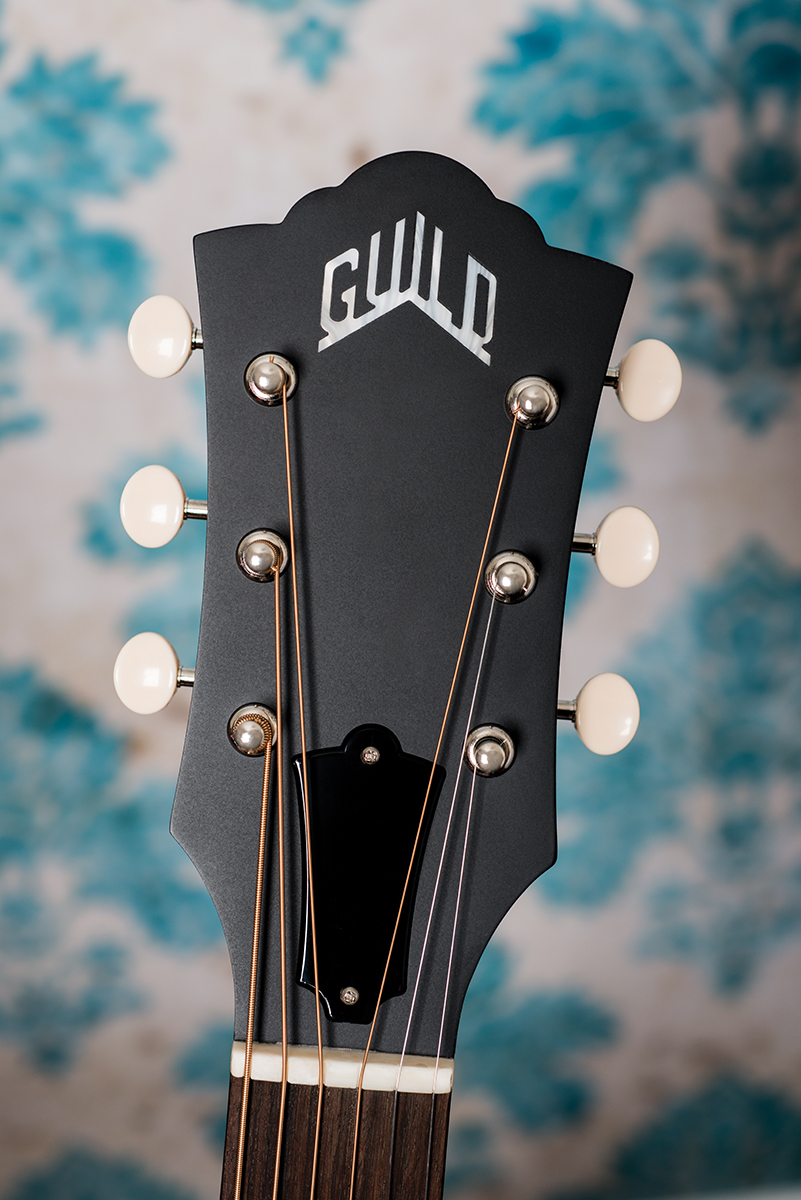 The bass end is vast, but superbly defined and devoid of boominess. It’s such a chest-filling and elastic thud that it’s hard to resist hitting open E chords at every opportunity, or exploring ever-deeper tunings, for the sheer sensory pleasure of it. With the power comes great refinement and balance because there’s no midrange scoop or hyped treble.

Consequently, the D-20 is every bit as good for delicate fingerpicking as solid strumming. The dynamic range is vast and the tone changes with playing intensity. Play lightly and the D-20 speaks with a silvery sweetness, but attack the strings hard and it responds with a percussive hi-hat cut.

Despite having been in transit, both guitars arrived pretty much in tune, and it’s apparent that they leave the Guild factory set up properly. The nuts are fitted to perfection, with slots that need no fettling, and it’s pleasing to see bone saddles have been used. After all, bone is what Guild would have employed on the originals, and while we’re not saying that it’s unquestionably the best-sounding stuff, we’ve yet to encounter any material – natural or otherwise – that sounds better. The action is also easy-playing without being buzzy, and the intonation is about as good as it gets on factory-made acoustic guitars. 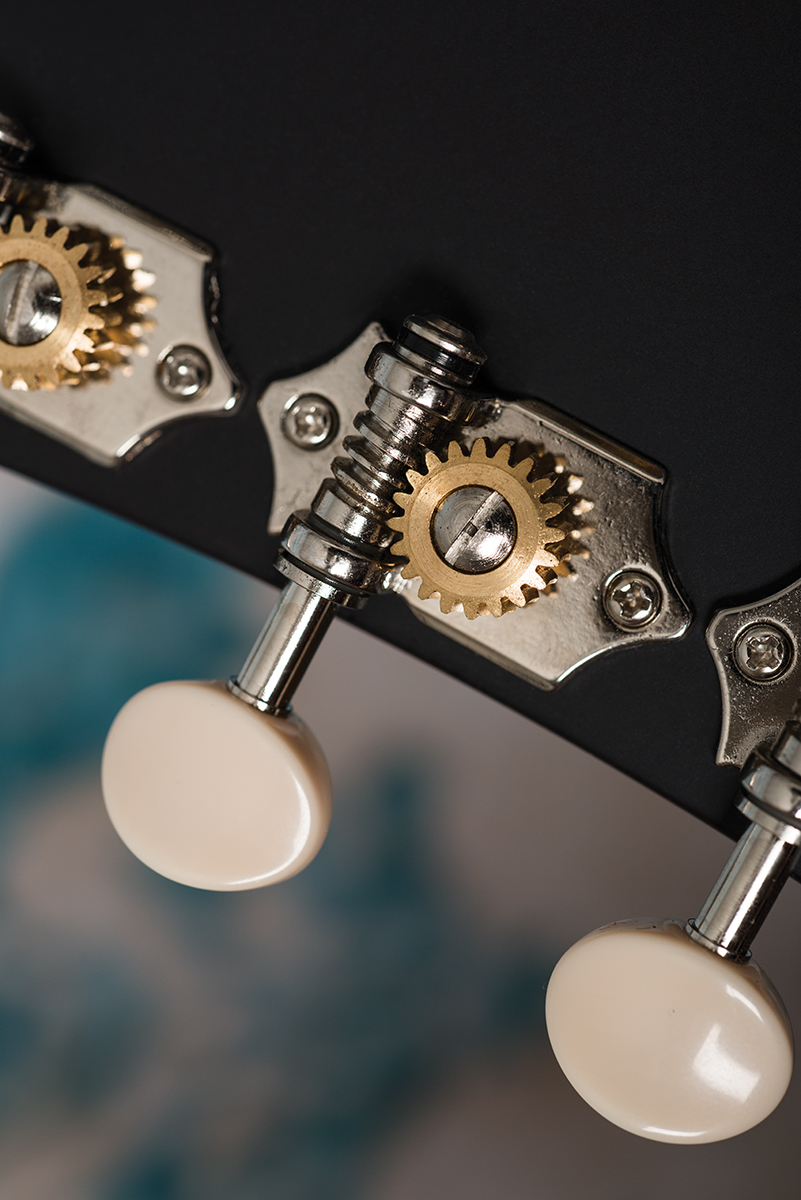 We have high hopes for the M-20 and suspect it may even improve when ‘duller’ later. Given its diminutive size and all-mahogany construction, it’s a guitar that defies expectations. As for the D-20, it has the smooth grandeur that we’d more usually associate with 12th-fret neck joints, and the way notes combine to form clear chord voicings is something special indeed.

Our overall impression is that the powers that be at the new Guild factory are showing due deference to Guild’s heritage and no corners are being cut. Back in the day, Guild was up there with the best and we’re pleased to report that it still is. 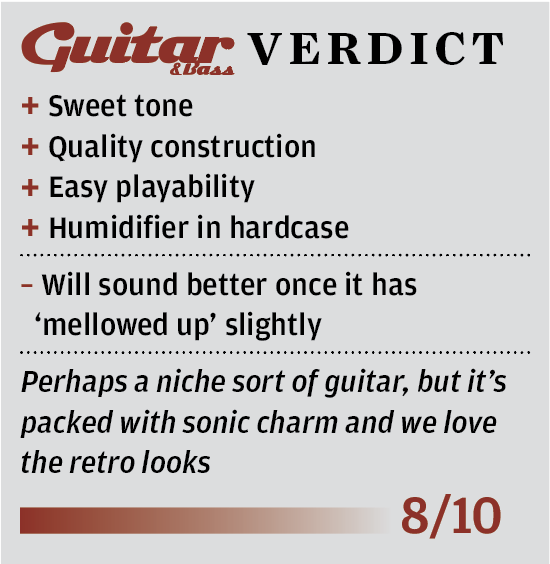 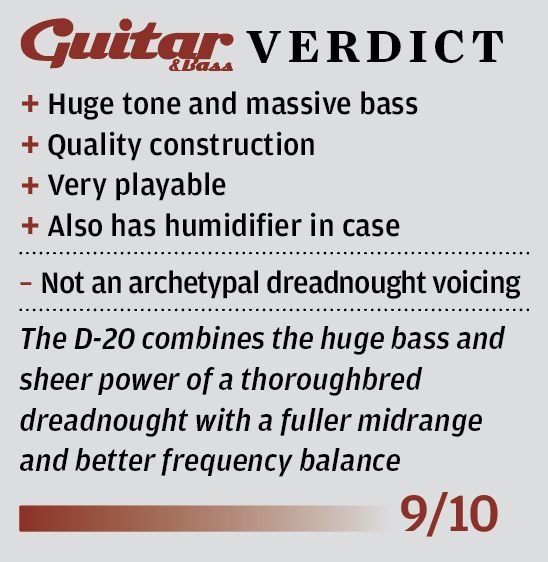