Hagstrom’s H-III was a classic 60s instrument and this update captures its spirit perfectly. Marcus Leadley takes a look. 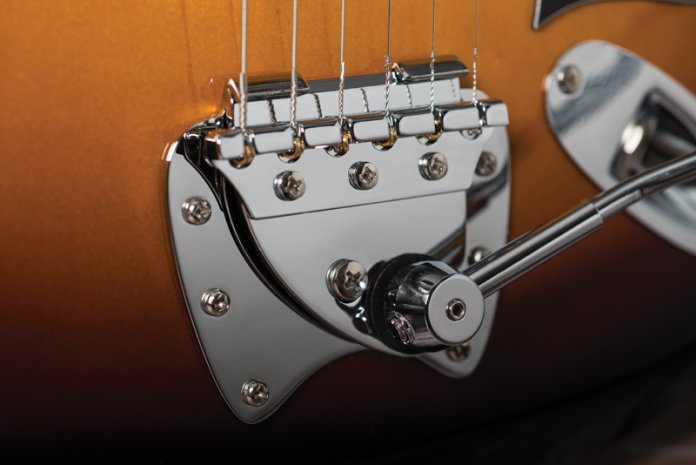 By the time the mid-1960s, arrived, Swedish guitar maker Hagstrom was already well seasoned in the art of instrument building. Guitars under its own name and international brands such as Kent and Futurama had spread around the world.

The H-III (along with the H-II) was introduced in 1965 and, like many instruments of the period, sported multiple pickups and a fearsome array of switches – all designed to get the maximum flexibility of level and tone from the basic valve amps of the day.

Today’s H-III is something of a hybrid, relying on North American timber and Chinese manufacturing prowess – and yet the character is unmistakably European. While the basic concept of a bolt-on neck, three single-coil pickups and a tremolo bridge pays homage to Fender’s innovative approach for the Stratocaster, the H-III feels and sounds distinct – with some similarities to the Burns Marquee but its own character. However, both Hagstrom and Burns pickups feature ceramic magnets, so the comparison is not lost.

The original hardware was designed for purpose and function, while carefully avoiding any Fender patent infringements, and this contributes massively to the sense of individuality. 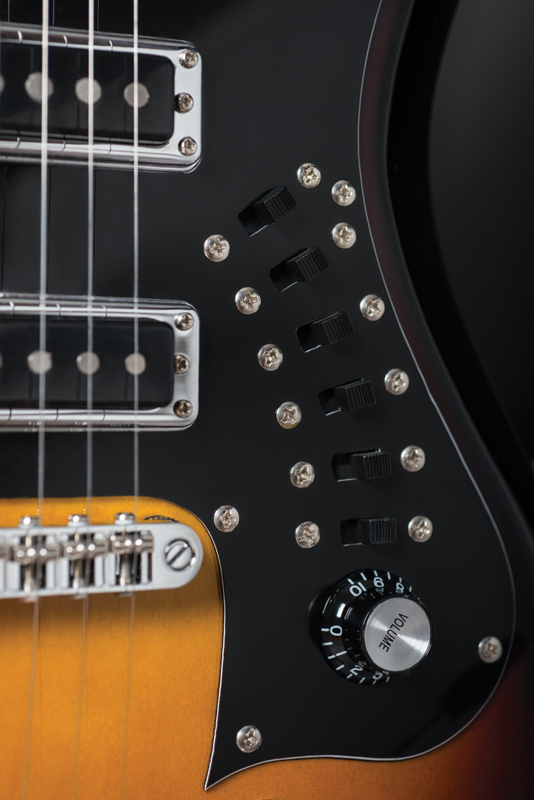 For this 1966 update, Hagstrom has made a few contemporary adjustments: the Canadian maple neck is retained by a metal plate and four bolts, not three (as per the original), and the new roller bridge is a great improvement over the vintage version which, while being intonatable, relied on friction saddles.

As a consequence, the Tremar vibrato works well and the instrument stays in tune – most of the time. However,  the unit’s not designed for aggressive bends. Spring-loaded from below and with a tension adjuster screw, it also functions as the tailpiece where the strings are retained. In terms of performance and feel, it has a very similar character and set of limitations to Fender’s Jazzmaster tremolo.

While we’re down at this end of the guitar, note the two strap buttons; anyone who’s watched a guitar slide and crash to the floor from a position lent against an amp will appreciate this very pragmatic bit of Swedish design.

While the body, which is made from selected American alder, retains its overall form with sharp offset horns somewhat reminiscent of the Guild S-100, the headstock gets a redesign to make it a little less Fender-like. I like this new look; it’s chubby in a vintage Teisco way.

The neck feels great. It’s broader and flatter than you might expect, while under the fingers the board feels remarkably consistent and friction-free. This isn’t luck, it’s materials science; the fingerboard is made from a proprietary substance called Resinator, which Hagstrom now uses on all of its guitars.

It has the appearance and feel more of ebony than rosewood. Generally speaking, the instrument’s finishing is very good. However, there are a couple of minor issues. Over-zealous buffing of the neck appears to have caused some scratching of the upper frets on the treble side of the neck above the 12th fret. Also, the pickup surrounds have been fitted over the scratchplate’s clear film protector,  which makes it difficult to remove cleanly without leaving a ragged edge.

The new Retro-S single-coil pickups are designed as close reproductions of the 1960s originals, and with the blocky, rectangular design and chrome surrounds Hagstrom’s certainly got the look right. While the single volume control needs little introduction, the six selector switches certainly do (the seventh, on the upper bout, is a useful kill switch).

In practice, the layout is much less complicated than it looks. The first three simply switch the pickups on and off. This gives a remarkable range of voices: seven combinations in total. There’s also a master tone on/off, mute and bass cut on/off. 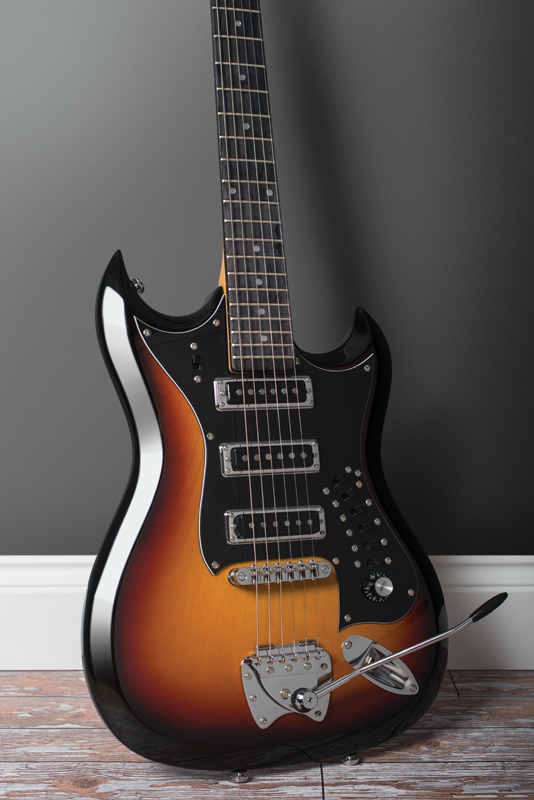 Right from the get-go, the H-III is an enigmatic instrument. Just what is the basic clean tone? Is it the bright, clear and twangy 60s-style sound with the bass cut switch engaged? Or is it the more contemporary sound with a fuller, richer bass that you get with the .003uFD capacitor out of circuit? These pickups are very full-frequency, and this is the full-signal tone.

You can certainly see why you might want to tame the bass end if you’re using an old Vox, Selmer or WEM amp. However, for driving a software Fender emulation the rich, rounded and natural-sounding bass is like a gift from above. For most distorted lead tones, it’s too much. 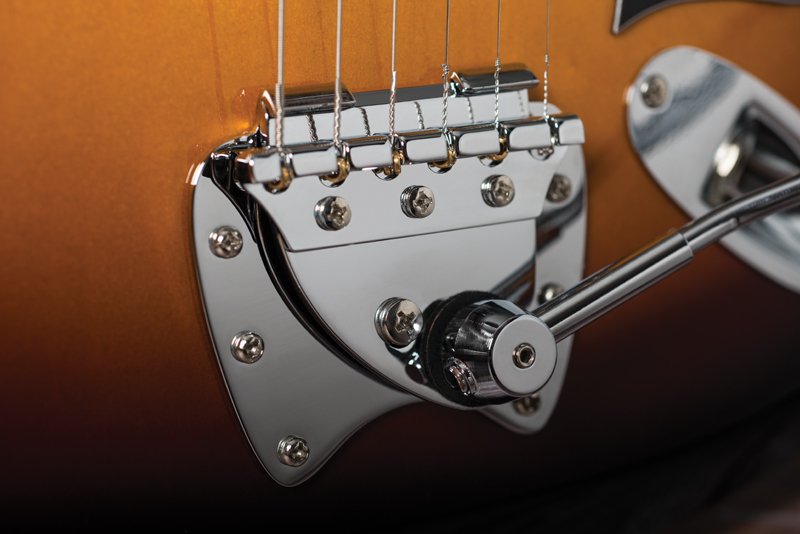 However, it can help sculpt some fantastically brooding rhythm parts. Engaging bass cut and concentrating on the Hagstrom’s vintage voices, there is still plenty of roundness and warmth to be had. Even the bridge unit delivers without brashness.

However, it nails a clean 60s melody/lead tone. Soloed, the middle pickup is one of my favourite voices; its wide open and jazzy but very precise, while the neck unit offers a little more mid and bass colouration. Overall, the pickups feel neutral in colour and allow the natural qualities of the instrument’s materials to define its sound.

The guitar is particularly resonant, and even the clean sustain is excellent. With all three pickups engaged, you get an excellent chord/strumming voice that’s very clean and hi-fi. It’s not immediately apparent in this configuration, but the middle pickup is wired out of phase with the other two. 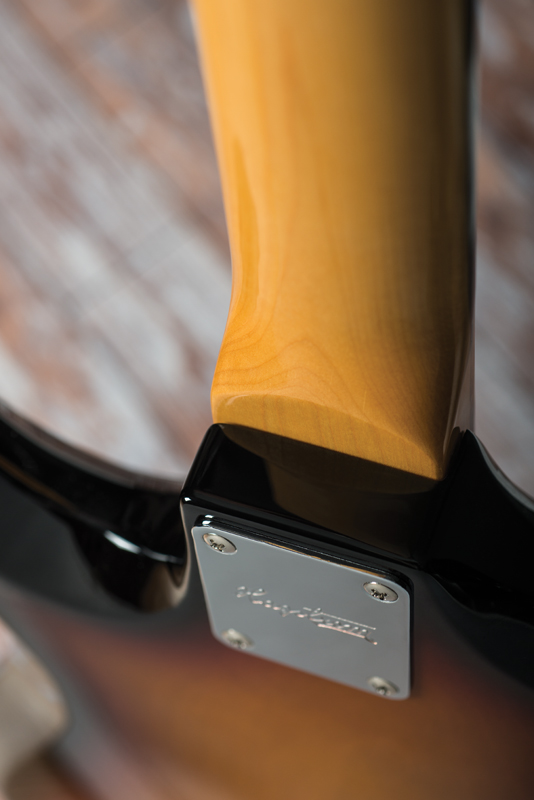 There’s a good degree of hum cancellation without the more obvious `quackyness’ Fender players will be familiar with. The switching arrangement is simple but powerful, allowing you to drop the middle pickup in and out at will. This is very useful, as you can toggle between this three-pickup chord voice and the warmer, jazzier rhythm sound created by using the neck and bridge pickups together.

The master tone switch gives a muddy, mellow chord comping voice and the mute switch knocks the output back to a fraction. You’ll find vintage electric blues tones and sounds for aggressive punky, garage-rock style riffs. The H-III’s natural sustain makes it a good choice for melodic lead playing as well. However, at extreme gain settings you can lose some definition ± hardly a surprise, as this classic was never designed to perform in that particular arena. 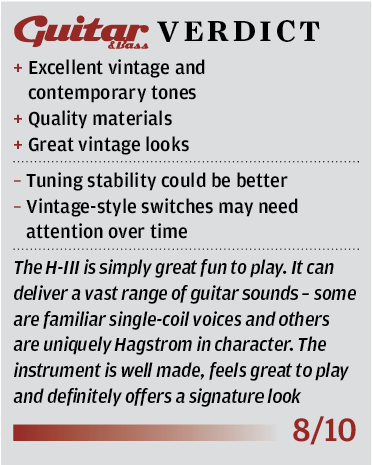