What’s the Swedish word for guitar? Well, it’s ‘gitarr’ – but as far as the music world is concerned, it might as well be Hagstrom. Marcus Leadley tries out a well-dressed semi-acoustic. 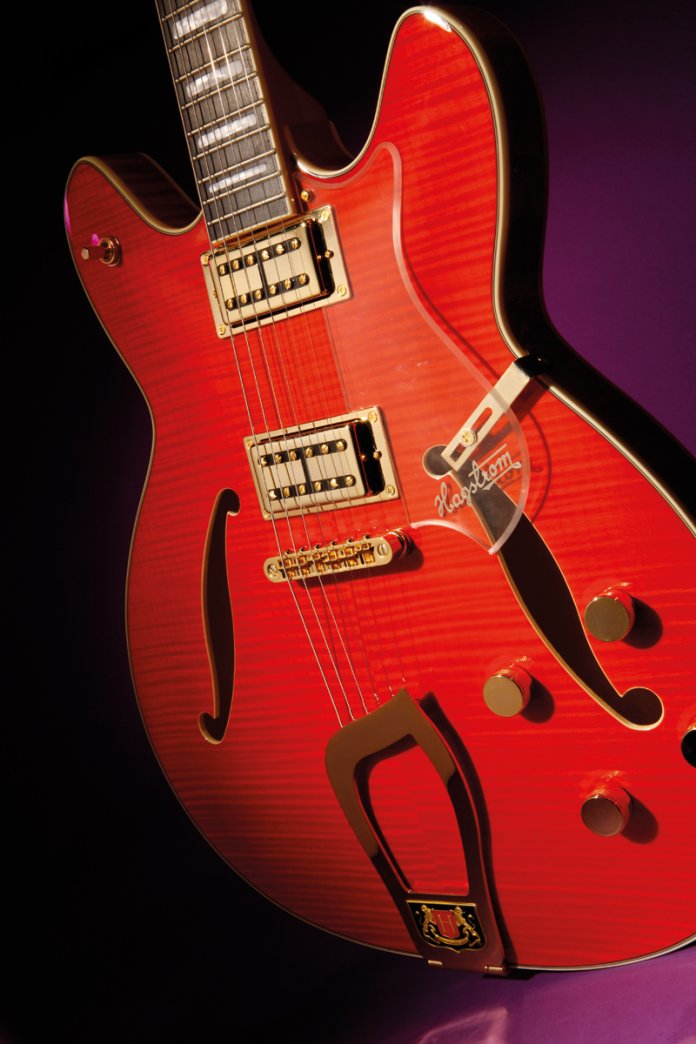 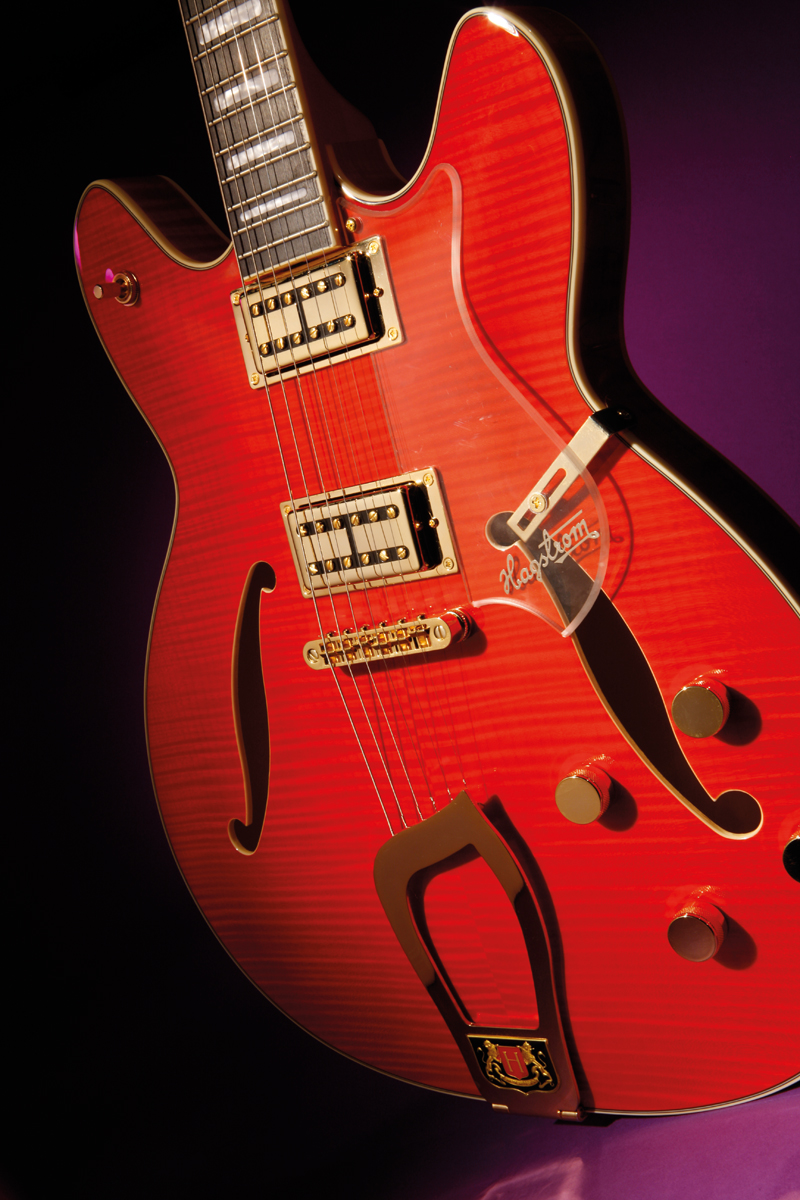 This Hagstrom certainly makes a bold statement. The colour of this particular finish is called mandarin, and the rich red/orange glow is very warming indeed. Accented with gold hardware, this Viking Custom Deluxe will definitely get you noticed, and as a ‘smart’ guitar it would look just dandy worn with a well-made suit on the vintage pop and retro jazz scene. It’s a quirky look, too; Hagstrom’s vintage credentials are rooted in the late ’50s and early ’60s, and the company’s European design aesthetic manages to be both flamboyant and restrained. 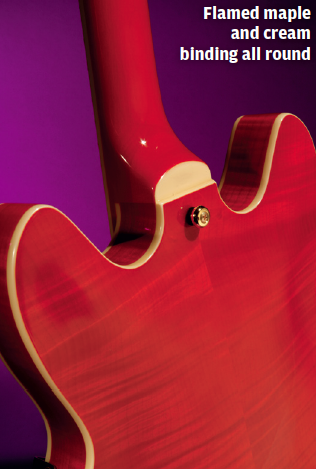 While Hagstrom production first began in 1958 and ceased in 1983, Karl Erik Hagstrom remains very much in the loop and continues to approve new designs in the Select, Vintage and Ultralux series. North American timber is used right across the range of instruments, with American and Korean made parts contributing to the Chinese-based manufacturing process.

Design-wise this Viking has most in common with the company’s production model of 1978-’79. The defining aspect is the use of a solid maple centre block that runs the full length of the body. Mid-’70s Vikings like the 1 N had the same ‘lily’ design headstock badge and humbucker pickups, but only a smaller support block under the bridge. Models prior to this had a six-in-line headstock (like the so-called ‘Elvis model’ he played during the ’68 Comeback Special) and single coil pickups. 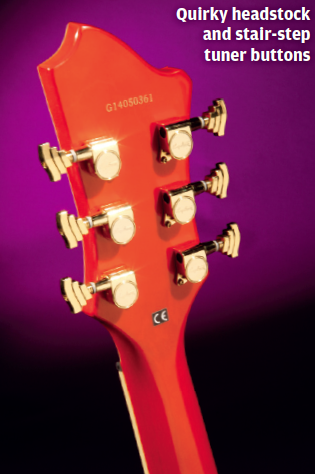 The use of the full-length centre block aligns the Viking with the Gibson 335. Dividing the body chamber in this fashion is principally a feedback-busting trick to enable a semi-acoustic to function effectively at high volume, making them ideal for electric blues and a serious alternative to a solidbody for rock gigs.

Laminates are generally used in semi-acoustic construction, and this is the case here. The addition of a flame maple top is a stylish twist’ and the slightly chubby design of the f-holes adds a unique Hagstrom touch.

One major point of departure from previous Viking designs is a move from bolt-on to a set neck. Again, this aligns the design with the 335 and one cannot help but feel this instrument is being set up as a less expensive contender for the potential Gibson buyer’s cash.

This Viking Custom Deluxe balances well on the knee or a strap. The big (but not too big) body makes it a great guitar to cuddle on the couch, and the pleasingly loud and twangy acoustic response suggests it would be an ideal late night instrument for a bit of unplugged fun.

All Hagstroms, and this Viking is no exception, feature a Resinator fretboard. This wood composite is designed not only to emulate the look and feel of ebony but also to be super-hardwearing and to deliver a very consistent feel. If I didn’t know this and simply played the guitar, I don’t believe I’d think it was anything other that ebony; the feel has the right smooth, low friction appeal, and the colour match is spot on… there even appears to be a grain structure. 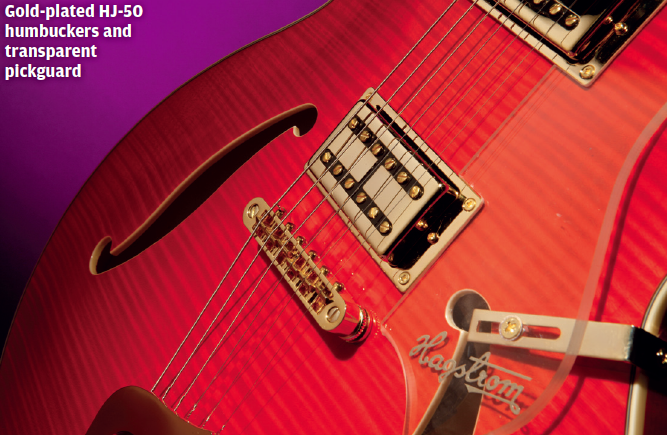 The board is nicely bound and well fretted, and in combination with the slick Canadian rock maple neck it feels great to play. The neck is slightly less deep than the equivalent Gibson 60s slim taper; it’s narrower at the nut but, surprisingly, wider at the 12th fret, so it feels wider and flatter.

However, the 24.75″ scale length ensures a familiar tension under the fingers that promotes easy string bending. Upper octave access all the way up to the final 22 fret is really very good.

The vintage-style 18:1 diecast tuners look good and the stepped keys feel nice under the fingers. The Long Travel tunomatic bridge is a fairly familiar-looking unit which combines well visually with the slightly quirky Hagstrom trapeze tailpiece. 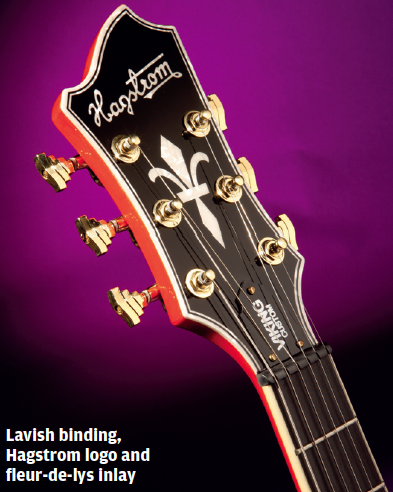 The Korean-designed Hagstrom HJ-50 humbuckers are relatively new units, though the covers with the black ‘H’ insert and screw polepieces looks like a design straight from the same era as the Gretsch Filter’Tron. Looking through the lower f-hole it’s good to see that full -size pots and quality hookup wire have been used.

The electrics offer a standard feature set: independent tone and volume controls and a three-way toggle pickup selector, which is sensibly located well out of harm’s way of the upper forward bout.

Sounds
Both pickups are very well voiced for clear, clean and twangy tones. The bridge pickup is bright without being brash and the full spectrum response is nice and even. There’s a slight bump in the mids, but the bass end is smooth and mellow. The twang factor is very good for rockabilly and country playing, and vintage Beatles and Stones tunes sound authentic.
The twin pickup setting offers a ringing hi-fi tone that’s ideal for contemporary jazz and melody work and the neck unit delivers a similar, but rounder tone – a great all-purpose rhythm voice.

The tone controls on a semi can really help you on the way to a range of mellow solo and jazz voices. Unfortunately the Viking’s aren’t the most flexible, as they have little effect until the last third of their travel. This all-or-nothing characteristic is usually an issue with lower-priced guitars and should really be addressed; it’s an easy fix with the right capacitor. 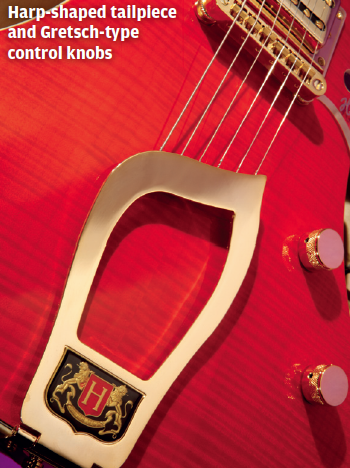 When it comes to rock, the Viking Custom Deluxe is full of surprises. The pickups are relatively hot and require very little amp gain to bring on a sweet, edgy sound for electric blues. To be honest, it’s more a question of holding this guitar back; it really wants to leap forward into full on hard rock territory. Anyone who loves massive power chords and wailing leads will appreciate the power.

It’s hard not to compare this Hagstrom’s sound with Gibson or Gretsch voices, but it comes off very favourably. In terms of a unique tone I particularly like the twin pickup drive tone with the neck pickup’s tone control wound right off; you get a kind of underpinning lo-fi swampiness with clarity in the mids and bright top end. It sounds awesome with analogue delay, and totally evil when you stamp on a fuzz pedal.

Verdict
The Viking Custom Deluxe mixes quality materials and parts with a slightly quirky vintage look, and the result is a great guitar that’s fun to play and very versatile.

If the mandarin/gold hardware combination is a bit opulent for your tastes there are other Viking models to consider, but it all rather suits an instrument that functions well in both Gibson and Gretsch territory – and the price is certainly right if you fancy the big-stage semi-acoustic sound but don’t have £2000-£3000 to invest. 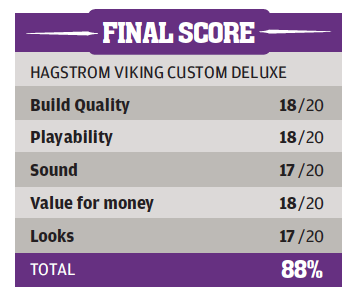