Regular Guitar & Bass readers will be familiar with the visual feasts that are Trev Wilkinson’s Italia Guitars. Though the Maranello Z bass has been part of the Italia range for a number of years, it was only added to the catalogue of UK distributor John Hornby Skewes relatively recently, in late 2014.

The model came into being when Manic Street Preachers bassist Nicky Wire – often seen touting a single-cutaway sparkly red Maranello – needed something with a different vibe for acoustic gigs.

Still in familiar single-cutaway form, the Korean-made Maranello Z differs from its sister model in construction and pickups. What you get is a semi-hollow body, sporting a cream-finished maple top with black plastic binding. A pair of cool f-holes indicate that the mahogany core has chambers in the upper-rear and lower-front bouts.

It’s often the case that acoustic tonal benefits from chambered construction are offset by fitting standard magnetic pickups, but not here. Italia has chosen a much more interesting option by equipping the Z with a piezo-loaded rosewood bridge (with chrome tailpiece), the transducers being tiny chrome saddles that guide the strings towards the neck.

The volume, bass and treble controls are housed on an elliptical black plastic plate on the lower bout, and there’s a quick-release battery compartment on the back, which means the Z is active, Jim, but not as we know it…

When you fire up the Z with the tone controls set flat, whilst not the widest, the lows snarl and the E string has an aggressive element. There’s a real acoustic vibe here that contributes to a solid midrange, offering snappy punch with plenty of intent. For the highs, we’re talking subtle fizz, so not quite as explosive as we’d like, and the G string is a tad wiry, but the response is even with ample cut.

If it proves too lively, you can roll off the treble and boost the bass to dismiss excessive rasp, resulting in a decent thud, softened note edges and increased versatility. Boosting the treble alone gets you a spikey sound that can be overly metallic, but max the bass dial and it’s big and grinding with bags of presence, making the Z loads of fun to play. 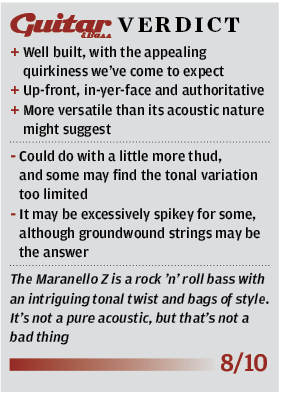